We’ve added a brand new Coromal Caravan to the Budget Travel Talk arsenal. This photo was taken at our first free camp at Notch Point Queensland.  Years ago we purchased an old van without amenities to see if we liked the lifestyle.  We did, but decided we needed to be self-sufficient and when some unexpected funds came our way, purchased a van with amenities including solar power that will enable us to travel further off the beaten track.

How many times have you booked accommodation with free wifi, only to discover the signal doesn’t extend past the Reception Area. I hope that this Wifi Extender (via a USB connection) might be the solution for us. Do you use a Wifi Extender when you travel? 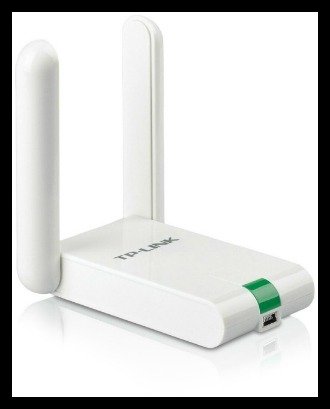 In all we stayed at fifteen Airbnb places in Europe.

Viz, Hvar, Split, Skradin, Zadar, Zagreb in Croatia, Ljubljana in Slovenia, Trapani, Palermo, Modica, Syracuse, Giardini-Naxos, Salerno, Rome and Positano in Italy.  We would rebook all of them except for the one at Trapani. By the time I got to booking Trapani, all of my original choices were gone so I made the mistake of choosing the cheapest place. When booking Airbnb as with other systems it is preferable to book early. We are crazy ambassadors for Airbnb and had such wonderful experiences in our Airbnb apartments during our 10 weeks in Europe 2015 trip.  Taking into account cost, host helpfulness, food specialty welcome pack, convenience and interior decoration we chose our Modica Airbnb apartment as our Best Accommodation Experience, but the rest were very good too.

Use the Airbnb link in our side bar to receive your first time Airbnb user discount. 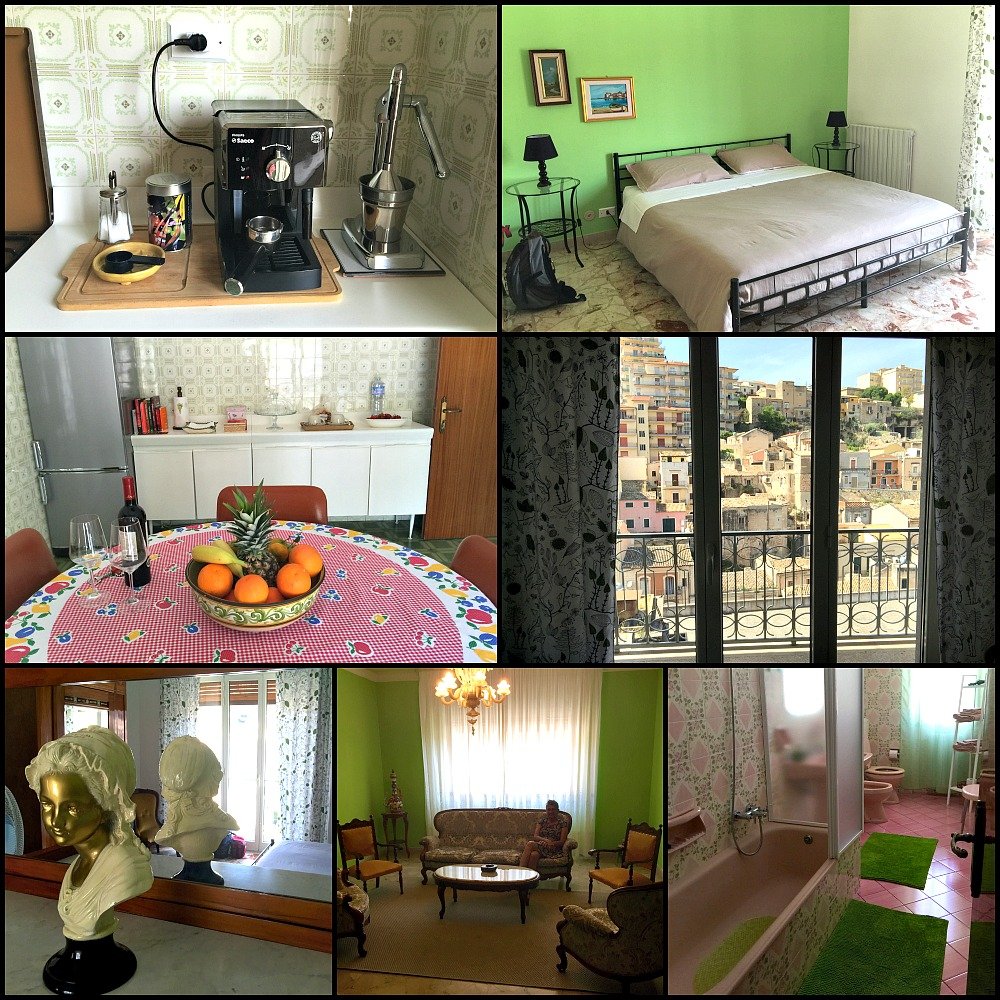 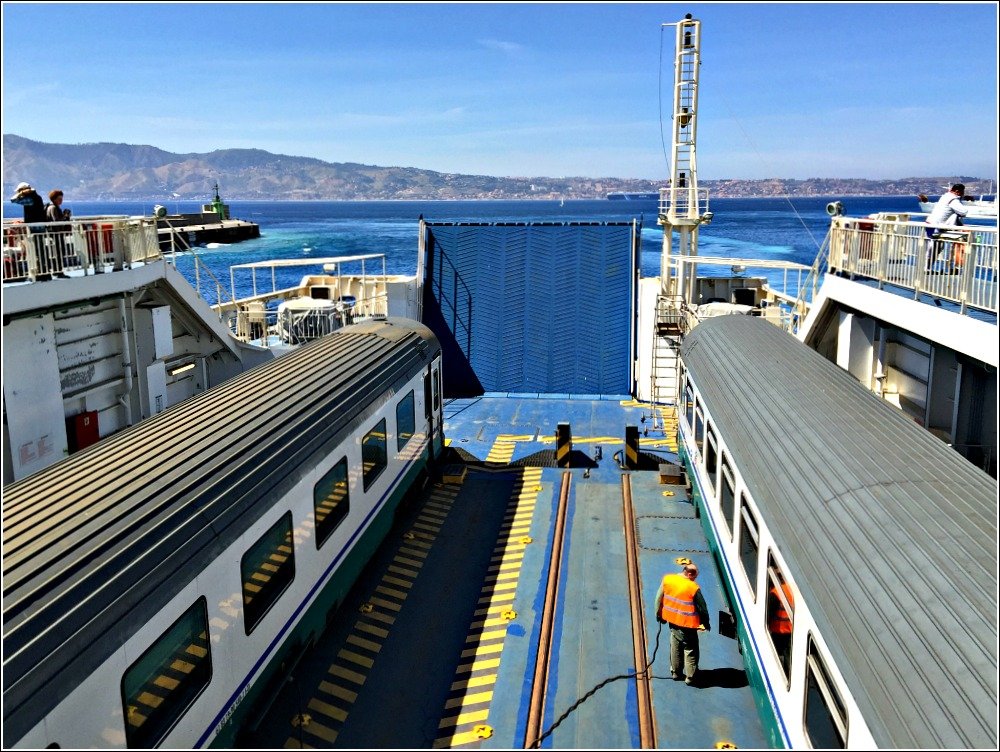 The train from Salerno near the Amalfi Coast in Italy to Taormina-Giardini in Sicily got mixed/bad on-line reviews. Complaints ranged from no food on board, through smelly toilets, failing Air-Con and worst of all a four hour trip regularly blowing out to six hours. The train splits in two before boarding a ferry across the Straits of Messina – one half going to Palermo and the other Syracuse. Our destination was Giardini-Naxos which was before Catania on the Syracuse line.  The station is on sea-level at G-N whilst Taormina is situated on the hill above.

We overlooked those reviews because

Pay Dirt. The train ran to time, The Air-Con worked, the toilet wasn’t too bad, we were seated with interesting people, we had our own food but food vendors boarded the train. We totally recommend using this train to get from Salerno (and the Amalfi Coast) to Sicily.

We are big city shy, but this year our flight to Europe arrived in and departed from Rome. We’d visited a long time ago and had no overwhelming desire to return, but this time we formed an instant rapport. Visiting in both Early and Late Spring we saw the Italian Capital in differing moods. Moderate temperatures and an even mix of sun and cloud made for delightfully long days of exploration in early Spring. Later in the season the sun beat down relentlessly and walking sucked the life out of me. To cope, I developed a routine of popping into a church, where I’d grab a pew, slip off my sandals and absorb some marble floor coolness. From these restorative sessions my appreciation of Rome’s churches blossomed.

No longer am I solely drawn to Temples and Mosques!

A mellow Colosseum on a Spring Night. 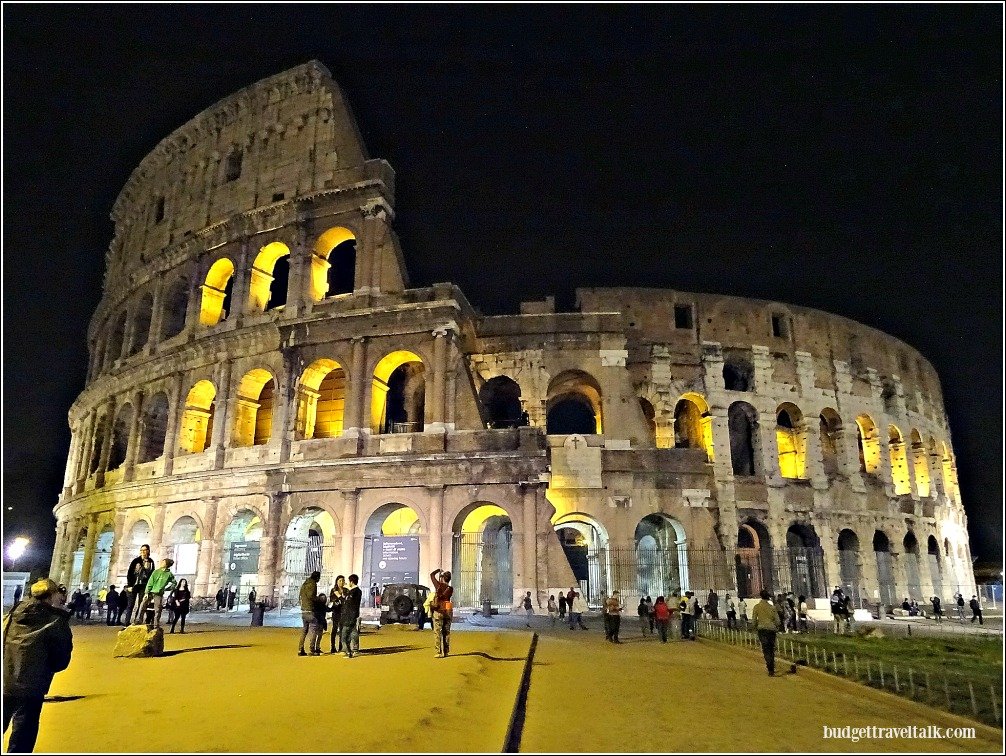 As we didn’t have access to the kitchen of this apartment we ate out far more than usual. Breakfast, served by our host, was accompanied by an enthusiastic and helpful discussion of our daily plans and Italian current affairs while we checked out Trastevere’s and Rome’s streetscape through rap around windows.

I voted Slovenia as the Best Road Trip in 2015 for the pure excitement of navigating through small roads and huge mountains. The gear shift certainly got a work-out on this trip. 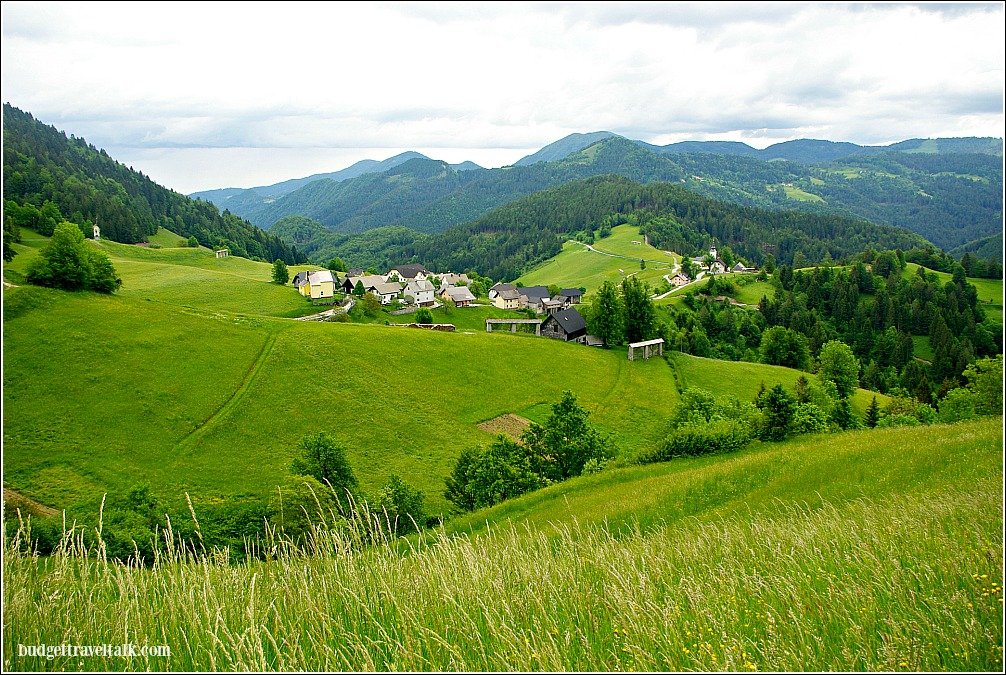 But how can I ignore our driver Marty, who chose the trip from Metković in Croatia along the Neretva River to Mostar and Stolac, Trebinje and finally Kotor in Montenegro.

The mountains on the Bosnian side of the border with Montenegro were every bit as gorgeous as those in Slovenia. 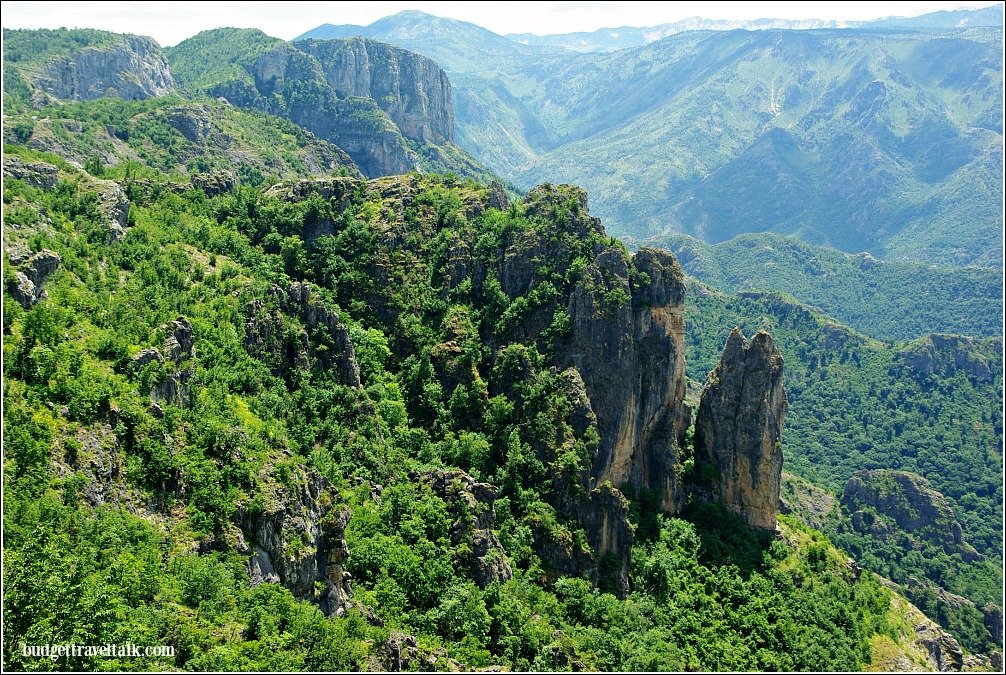 Whilst on the highlights of our road trips in Europe, I must mention our seven days on the Island of Vis, Croatia.  The only car available for rent when we applied was a yellow convertible.  It had seen better days but it started every time and the roof went up and down successfully.  This was without a doubt the most fun we’ve ever had in a rented vehicle.  If you’ve never driven a convertible I suggest you do so without delay!

The Funmobile on Vis Island 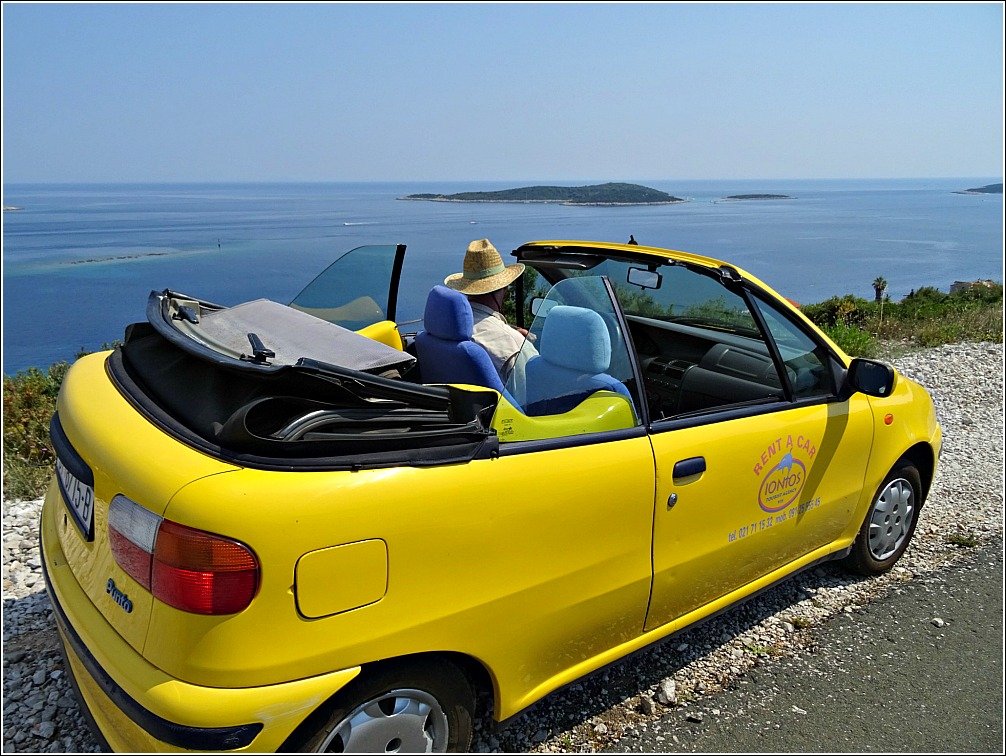 Staying in an apartment in Zadar’s old town, within earshot of the Sea Organ, the waterfront was on our doorstep. Evening was our time to visit the Sun Salutation, sit on the steps of the Organ and watch the sun set. My memory is full of sunset scenes like this.

I was not prepared for the bizarre appearance of snow on lava.  Like most black and white situations, the meeting was stark in perfect situations but where vehicles and people ventured a grey mush resulted. On arrival at Rifugio Sapienza base (1900m) the cable cars had automatically shut down due to high winds and the rest of our group ascended in 4WD trucks. There was a mix up with our tickets and in the time it took our guide to sort that out, the cable cars came back on line and we were the first to ascend in them – the trucks sounded safer to me! The Cable Cars (30 Euro) terminate at 2500 m after which a 4WD truck makes the final ascent (extra 33 Euro). A guide meets each truck and guides the passengers around the craters. It was bitterly cold at 2800m (the highest point visitors can reach) and the wind gusts were very strong – strong enough to blow me into a crater I felt! If you’re short on cash but want to get to the highest point, the walk from Rifugio Sapienza takes 4 hours but didn’t look appealing.

Etna is an active volcano. The following from Wikipedia. 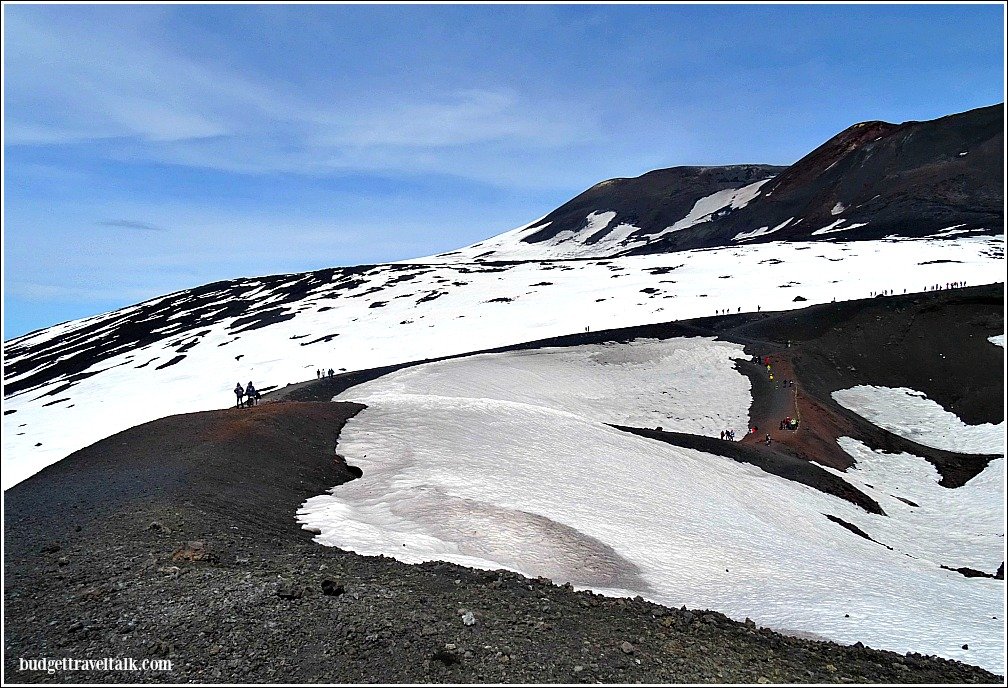 In November we went north to Trinity Beach near Cairns and then further to Port Douglas where we housesat 4 horses and a Blue Cattle Dog.  We find 99% of our Housesits through the Trusted Housesitters site. 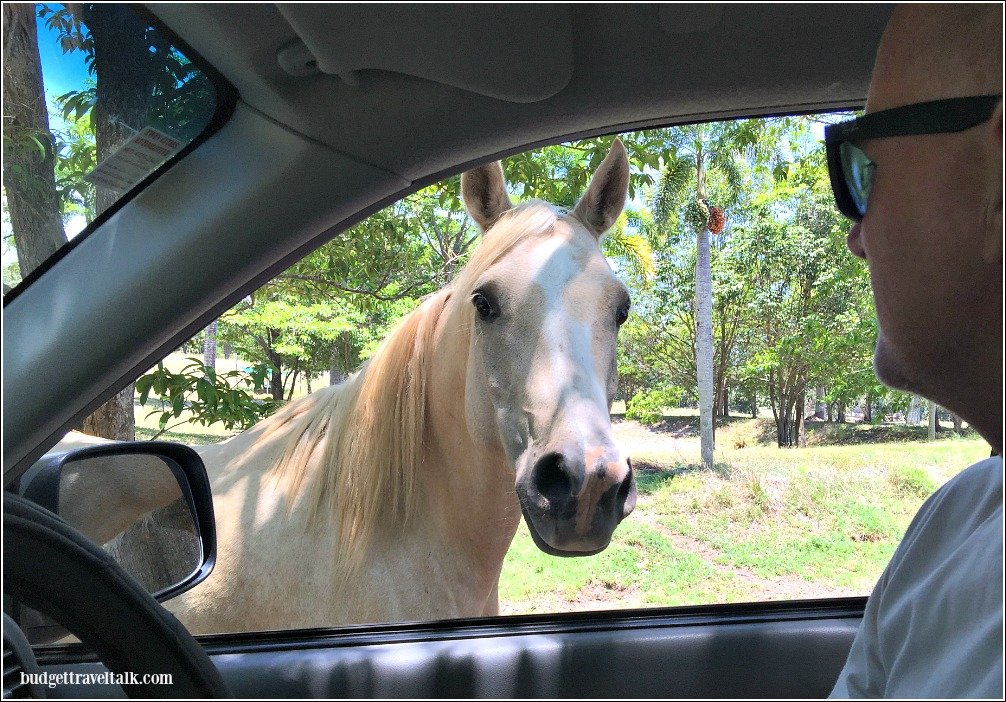 That trip also encompassed a barge crossing of the Daintree River and a day trip to Cape Tribulation.  There will be more on the blog soon about that beautiful part of Queensland.

This post is linked to Corinne and Jim’s Weekend Travel Inspiration at Reflections Enroute.

WISHING YOU A NEW YEAR OF HAPPY TRAVELS.

FROM JAN AND MARTY AT BUDGET TRAVEL TALK.

Food to Love – Grilling Fish on Vis Island Croatia
Next Post: The Church on the hill in Trebinje BiH