If the ruins of Ani in Eastern Turkey were any less spectacular, the landscape would steal the show. Only nature could provide such a theatrical backdrop.  This photo of the Ani Cathedral is one of my favourite photos of the ruins of Ani Turkey and there are more below.

The grasses inside the walls of Ani, are still green in October, but the surrounding Steppe is changing colour with the first hint of soft Teddy Bear brown appearing.  In Spring time everything is vivid green – even the roof top grasses.  The ruins themselves, built of local Tufa (a volcanic stone) are an interesting mix of yellow, red and black.

The ruins at Ani Turkey stand in solitary splendour in a monumental landscape.

There are magnificent ruined Georgian Churches in Eastern Turkey that are squashed between more recent buildings, making them difficult to fully appreciate.  At Ani each monument luxuriates in space.

The landscape appeal cannot be overestimated.

While King John of England was signing the Magna Carta in 1215 A.D., wealthy Armenian merchant Tigran Honentz was building his Armenian Church. Tucked into the downward slope to the Akhurian River or Arpa Cayi gorge, the church still stands some 800 years on.  With views up and down the river and across to Armenia (in the background of the photo below) I think he chose the site well.

The Church of St. Gregory of Tigran Honents on the Armenian Turkish border. 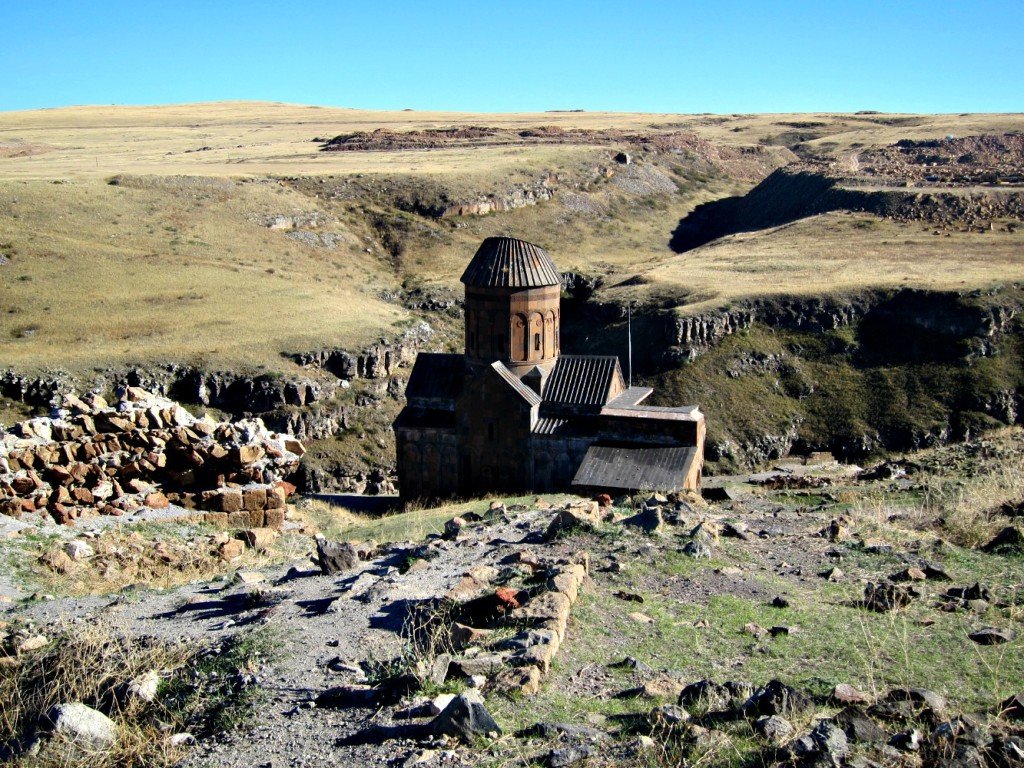 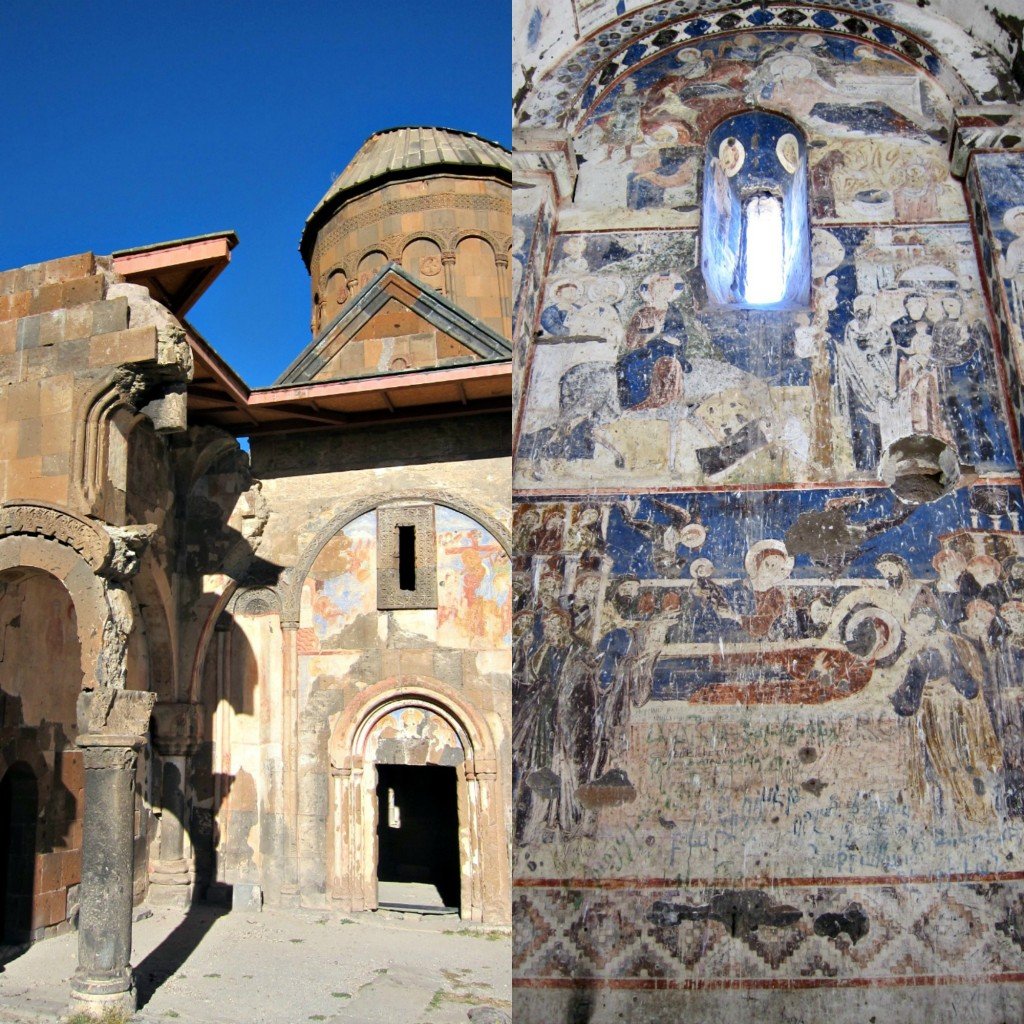 Frescoes within the Church of St. Gregory of Tigran Honents

The amount and condition of the frescoes within was wonderful considering their age.

This is in itself a miracle.  Two horrific things I discovered post-visit:

In 1990 whole areas of graffitied frescoes were chipped off entirely – not only removing the offending graffiti but the frescoes as well!

The reasoning behind that action is hard to comprehend.

The Menücer Camii has the most spectacular views.  Huge open arched galleries line the back wall overlooking the river.  A beautiful and spectacular place to sit and contemplate.

The Cathedral of Ani Turkey is an Armenian Cathedral 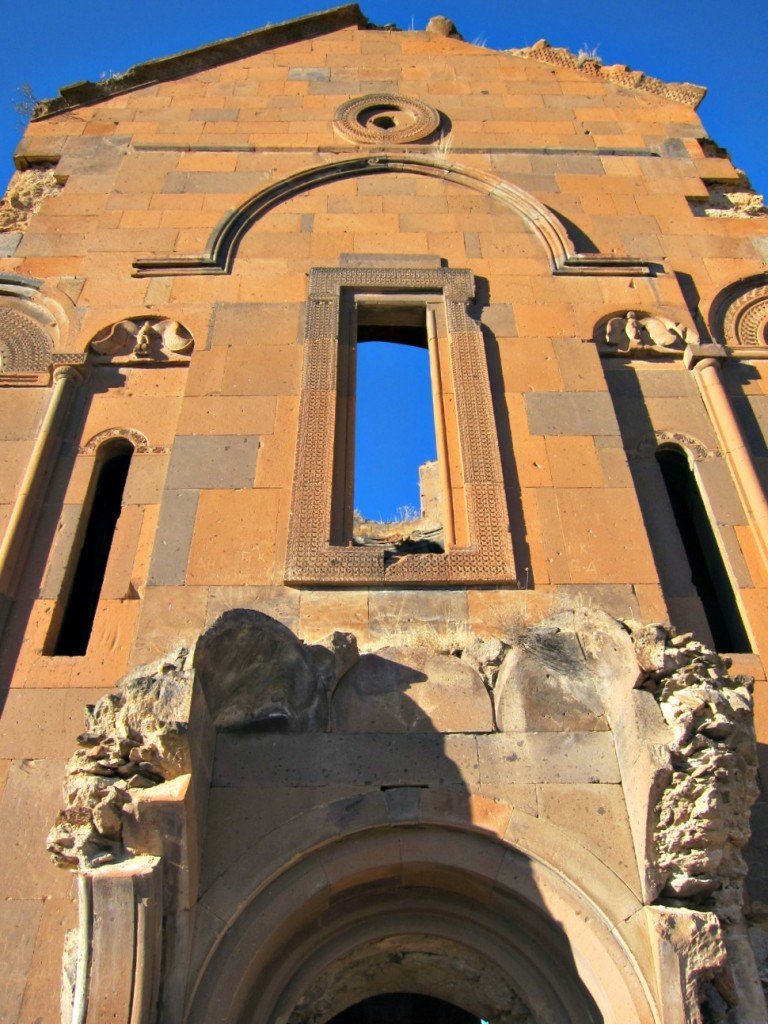 Viewed from the outside, the Cathedral is solid and imposing, but inside it’s true size is revealed. The missing dome which fell in the earthquake that marked the end of the town of Ani, only adds to the majestic interior. Light floods in like an enormous spotlight from the heavens.

The Akhurian River border between Armenia and Turkey looks daunting and inaccessible, not to mention that it flows through a restricted area. I’ve read a book where a traveller swam across the river to talk to some Armenian shepherds, but it is not something that I would consider let alone recommend doing.

I am always happy to be greeted by goats, and this is not the first time we’ve seen them employed as unpaid grounds maintenance crews in Turkey. 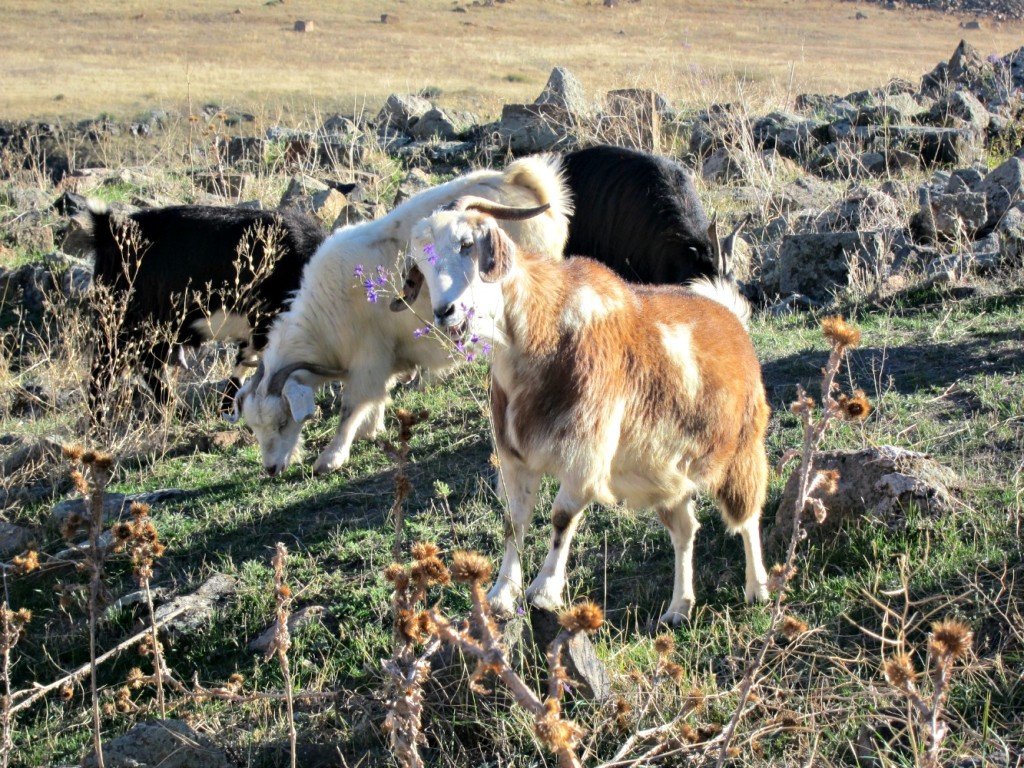 History of Ani in Eastern Turkey

After becoming the Armenian Capital in 961, Ani suffered numerous upheavals, eventually being over-taken by the Mongols in 1239 before being abandoned after a huge earthquake in 1319.  In the intervening years there have been earthquakes and the majority of buildings are in disarray.

Ani plays an important part in Armenian History. Wikipedia says: Ani is one of the most visible and ‘tangible’ symbols of past Armenian greatness and hence a source of Armenian pride.

The history of Turkey tells that during the Turkish War of Independence the monuments of Ani were bound for destruction. Thankfully this didn’t happen and although they sit on the semi-hostile border between Turkey and Armenia, the ruins of Ani are very accessible today.

The Turkish Armenian war of 1920 is a touchy subject and even more so is the Armenian Turkish genocide where an estimated 1.5 million Armenian people were supposedly exterminated. I am not a war historian but you can read about it here. Many Turkish people do not believe this as historical fact.

Since 1921 Ani has been on Turkish Soil, but in 961 when it was chosen as the Capital of Armenia,  it’s buildings were some of the most beautiful, artistically advanced buildings the world had known. Is it any wonder that Ani was destined to be the most popular girls name in Armenia? 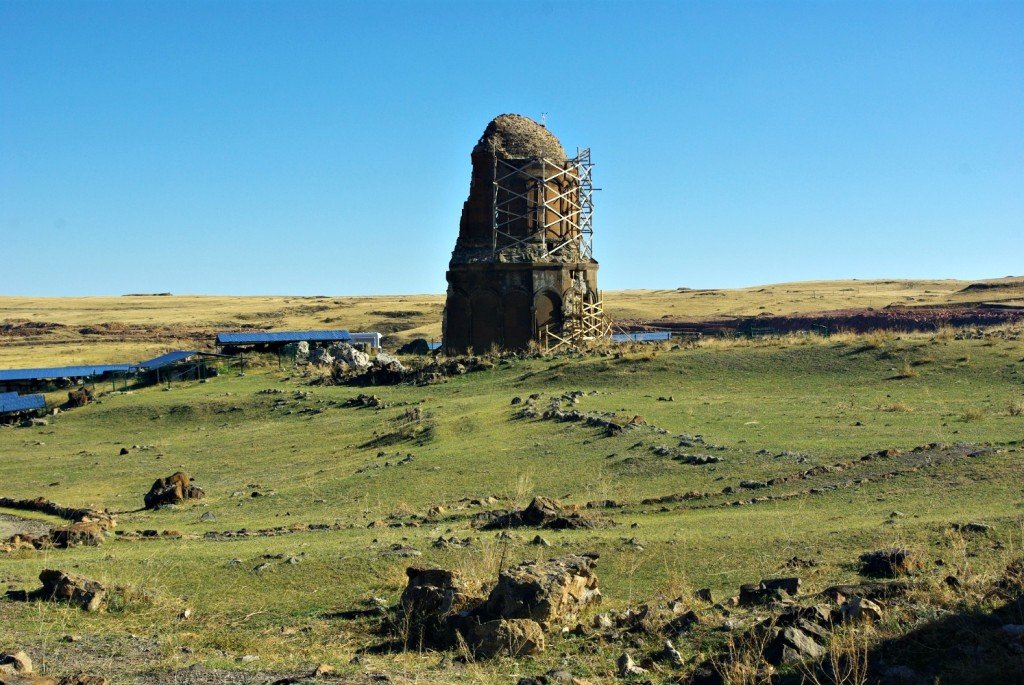 Perhaps understandably Armenia maintains a watchful presence, with a strategically placed quarry overlooking the river/border and Ani. Some experts fear the blasting is destabilizing the ruins. We met some Armenian tourists who had come to see the ruins of Ani. They did not seem to carry a grudge about the past and were very happy to be there.

In it’s hey day Ani was so beautiful and vibrant that it rivalled Constantinople (nowadays Istanbul) and the romance of what remains today is undeniable. The ruins of Ani wait in a heart-breakingly dramatic landscape.

We’ve been to quite a few ancient ruins in Turkey but these are my favourite. I highly recommend a visit to the Ruins of Ani.

You can read about our Eastern Turkey Road Trip here.

Ruins of Ani Budget Travel Tips
Lonely Planet Turkey suggests the existence of a shop at the gate but it was not in evidence during our visit.
It would make a beautiful setting for a BYO picnic though. Wear joggers or similar.  (I actually saw a girl tottering around on stiletto heels).
We went in the afternoon and for some reason the attendant only charged us for 8 tl one person.
We allowed 2.5 hours – half a day would be better.
Tourists have only been allowed easy access to the ruins since 2004.
October was a good month to visit.  The weather was perfect and I felt the lack of tourists added greatly to the experience. Whatever time you choose Ani does not draw huge crowds like Ephesus.  June does sound delightful for Spring Flowers amongst the ruins!
We drove from KARS. Kars Tourist Office can arrange Taxis for approx 150tl per taxi (cost can be shared with others).Specify how long you want on site.