When I first glimpsed a photo of the Roman Aqueduct of Segovia, I knew we had to visit on our April 2012 trip to Spain.  There were two days available for day trips from MADRID and we chose Segovia (because I just had to) and Toledo.  The other place we really wanted to see was the town of Salamanca.  I still lament that we had to fore-go that beautiful city that came with such glowing recommendations, but I do not, for one moment regret going to Segovia.

You know how sometimes photos are misleading and when you finally set eyes on the real thing it disappoints?

This was not one of those times.

Through the Aqueduct to the Cathedral in the Old City 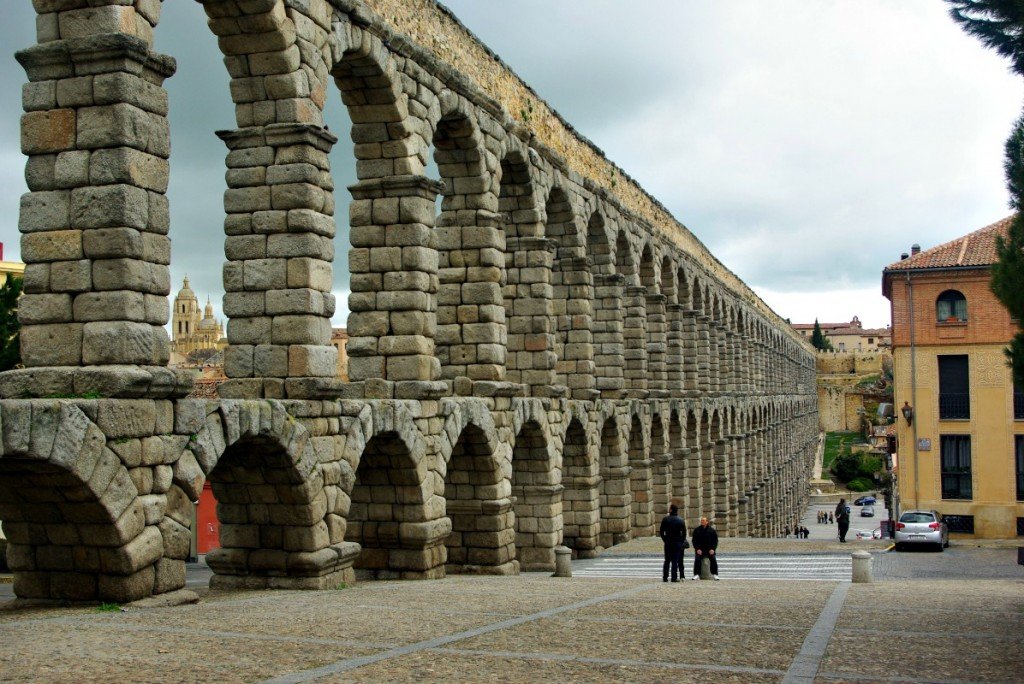 A closer view of the Cathedral through the Aqueduct. 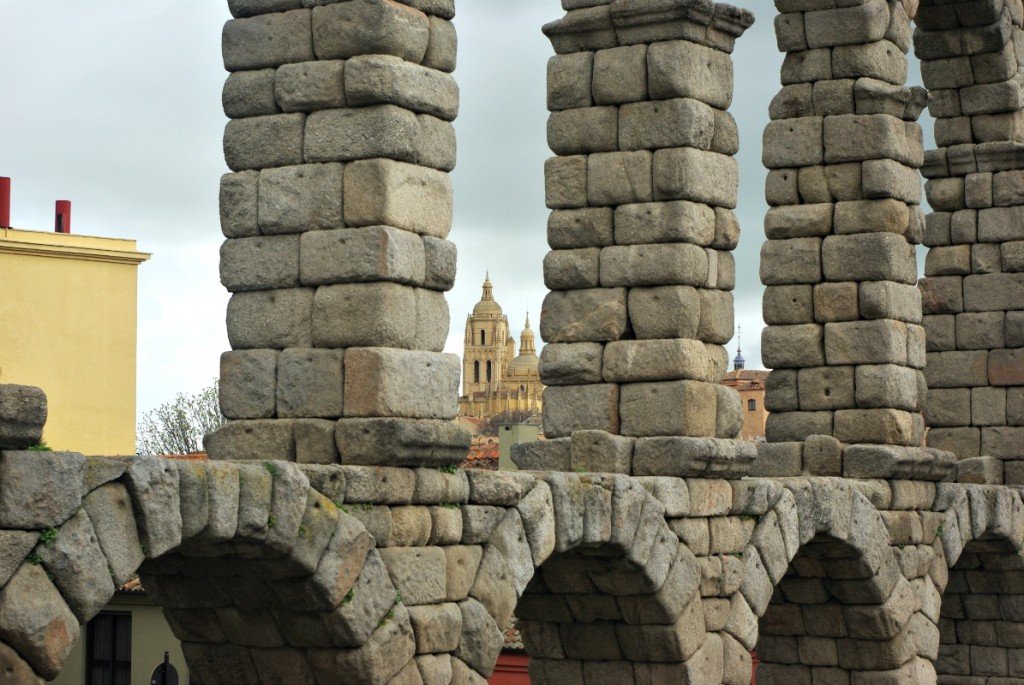 Backtracking to the aqueduct’s lowest point. 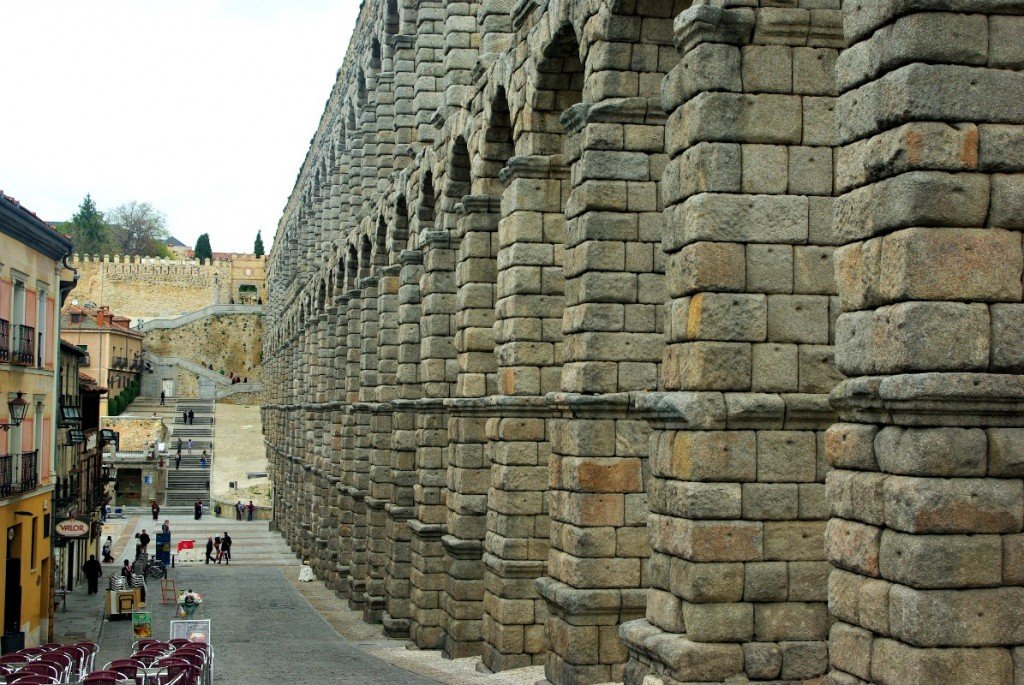 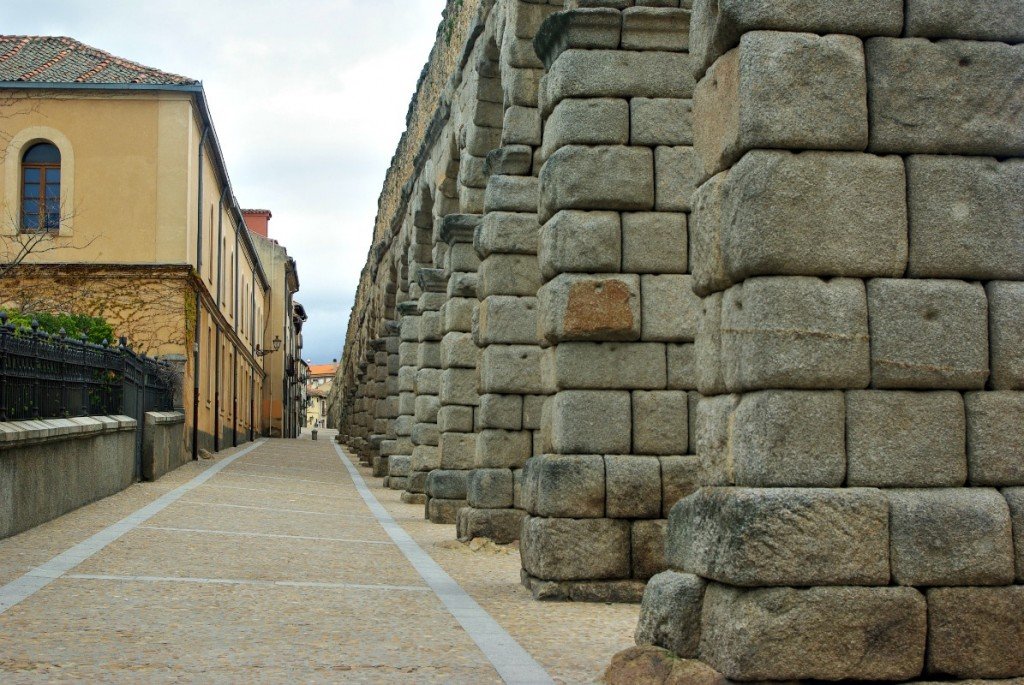 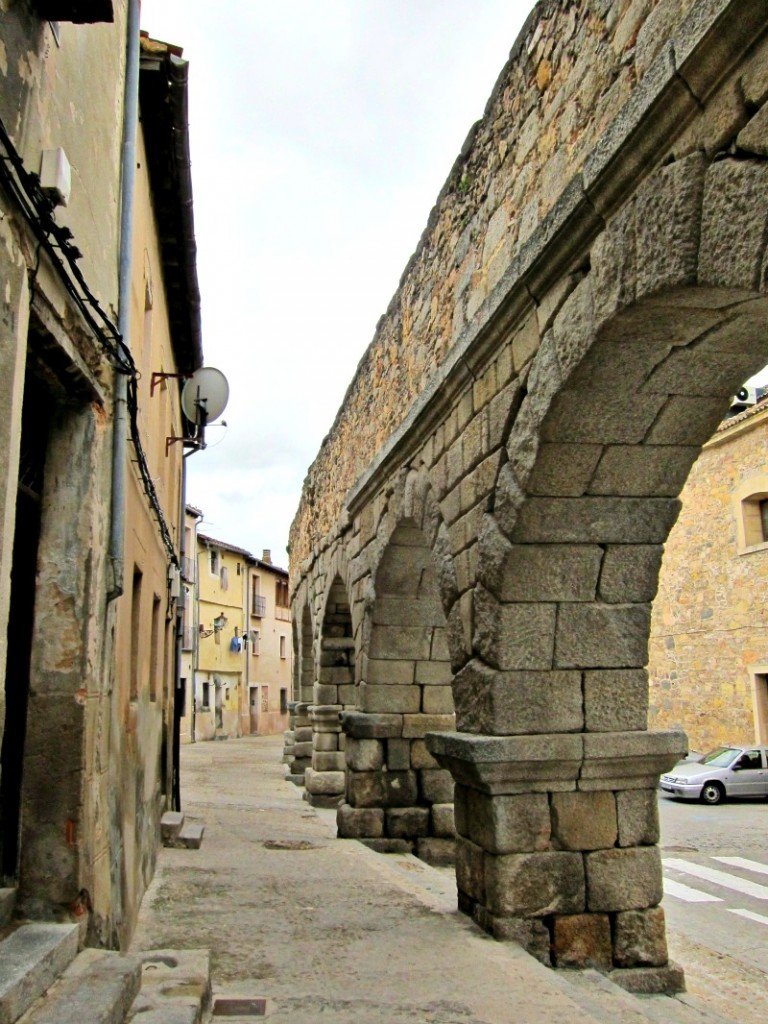 This photo shows the aqueduct where it first joins the bridge. 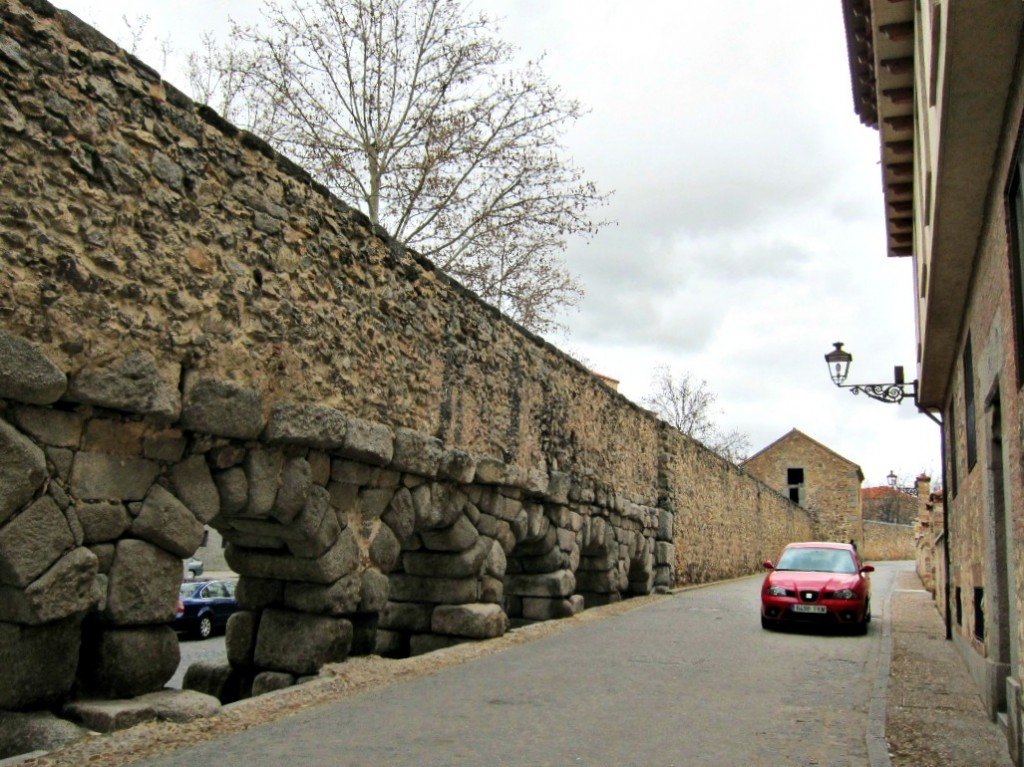 What is really amazing about this structure built in 50AD is that the huge granite blocks that make the 166 arches are held together without cement or mortar.  Built by the Romans, it is held together by balancing forces alone.

Impressive – The View on Arrival 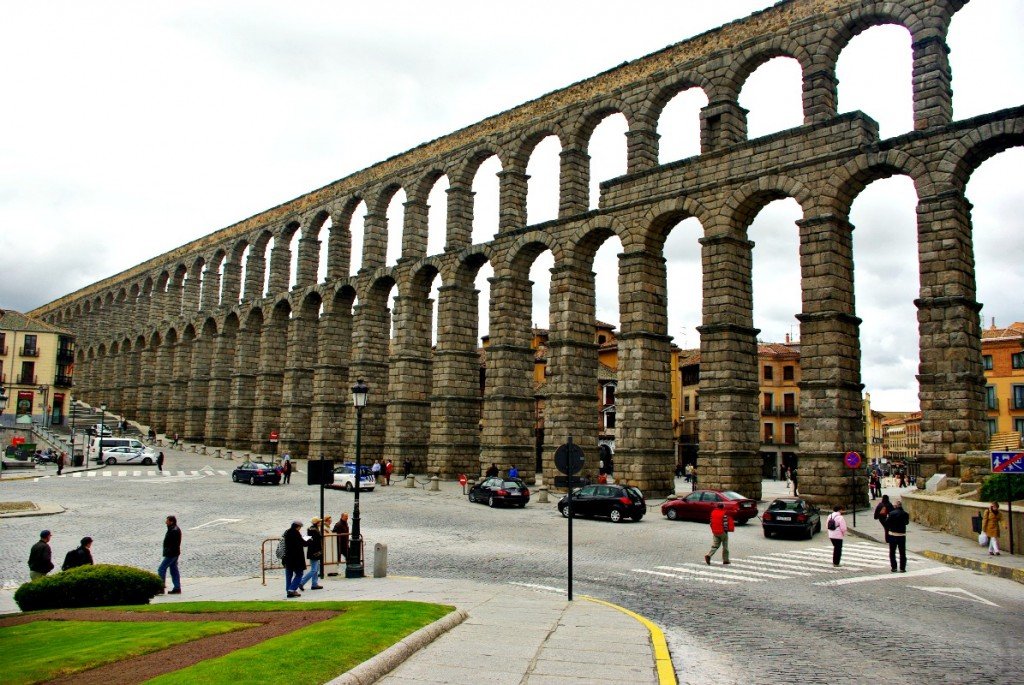 Looking up 30 metres up from Azoguejo Square to the Aqueduct bridge. 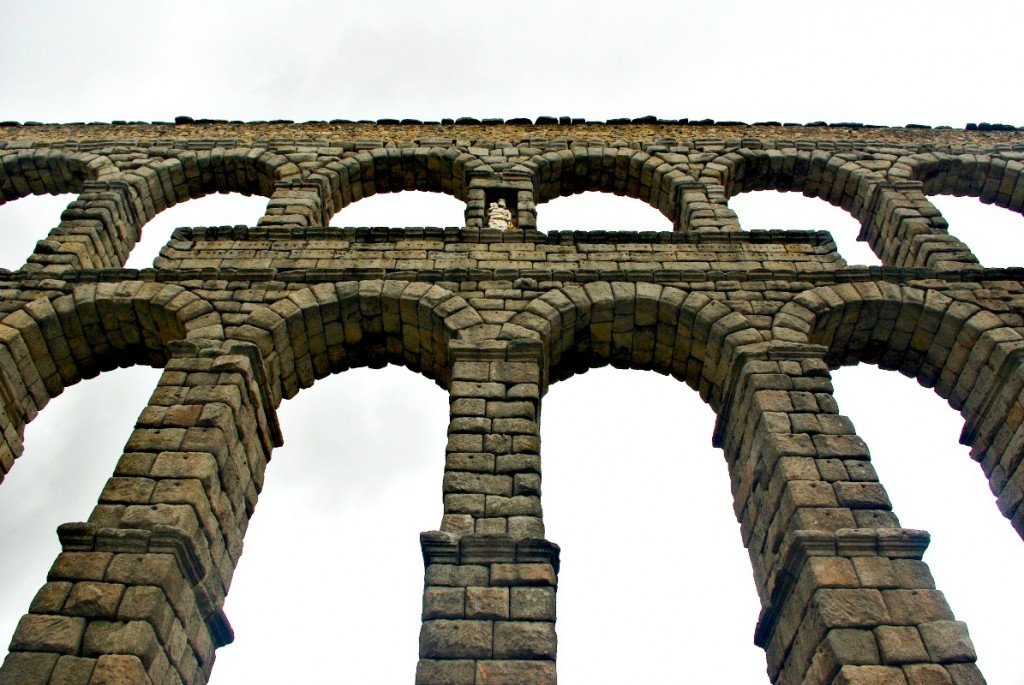 The old town and the aqueduct bridge became a UNESCO world heritage site in 1985.

Also referred to as “Puente de Diablo” or Devil’s Bridge, legend says Lucifer built the bridge in one single night, in order to win a young woman’s soul. Lacking the final stone when dawn came he failed to win, but the bridge remained.  Tradition says the holes visible on the stones are marks from the devil’s fingers. I did wonder about those holes …

It is only the last 800 m of aqueduct that is on display.
The other 15km is mostly buried underground.
The source of water was a tiny stream in Sierra de Guadarrama.
After the bridge ends and the aqueduct reaches the city wall it again becomes buried.
The final stop for the aqueduct is the Segovia Alcazar.
The aqueduct ceased supplying the town’s water, in the mid 19th Century.

We took the AVE fast train from Chamartin Station in Madrid.  It took quite a while to reach Chamartin by metro from La Latina our suburb in Madrid.  The fast train took half an hour but what we did not realize was that the Segovia AVE station is 7km from the old town of Segovia.  The train was fast, clean, with lay back seats.  Views were not great because of the long tunnels. Your seat may also be facing backwards.  Bus No. 11 was waiting to transport us (1 Euro) from the AVE station to the old city, but we had to stand.  When booking your AVE ticket you must choose a return time slot.  It is always hard to gauge when you have not been before, but we spent 4 delightful hours without viewing the Cathedral which was not open.

This is the RENFE AVE BOOKING SITE Choose Purchase, then insert Madrid Chamartin as Departure Point and Segovia AV as Arrival Point.  Book as a return trip and it costs 10 Euro each way.

The second option is the Slow train (approx. 2 hours) that leaves from Madrid Atocha Cercanias station and arrives at a different Segovia train station than the fast train – about 1km from the old city.  Segovia Bus 8 connects.

Use the same Renfe Site, but Choose Departure Point of Madrid Atocha Cercanias and Arrival Point of Segovia *.  The 8.30 am train is the fastest at 1 hour 45 minutes and costs at costs 6.35 Euro each way.  Further 2 hourly departures cost the same but take 13 minutes longer.

Or you can be like us and just arrive and purchase tickets on the spot.

The bus takes 1 hour 15 minutes from Madrid’s Principe Pio to Segovia.  The bonus is it arrives only 300m away from the action in the old city of Segovia and has better Views than the train.  Principe Pio is a metro station as well.

BUS TIMETABLES AND PRICES 8.09 Euro Out and 6.45 Euro back.  On arrival in Segovia get your return ticket validated.