You may have heard me refer to the Blue Blue Mediterranean before – because I cannot overstate just how blue the water WAS in the Turkish Mediterranean.  And that’s the other thing…

Is it O.K. for me to claim part of the Mediterranean on Turkey’s behalf?

Well I did jump from a Turkish boat into the Mediterranean Sea within Turkish national waters – I guess that makes it the Turkish Mediterranean?  That’s settled then.

Here are some photos to back up my claims. 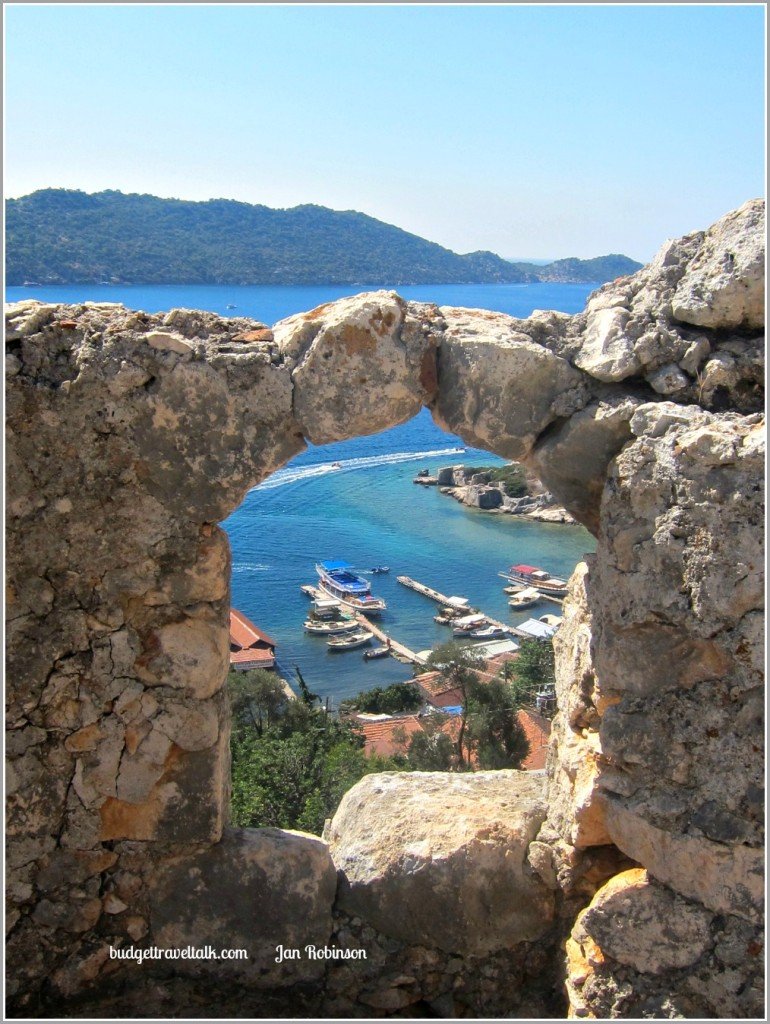 He is alive I assure you. 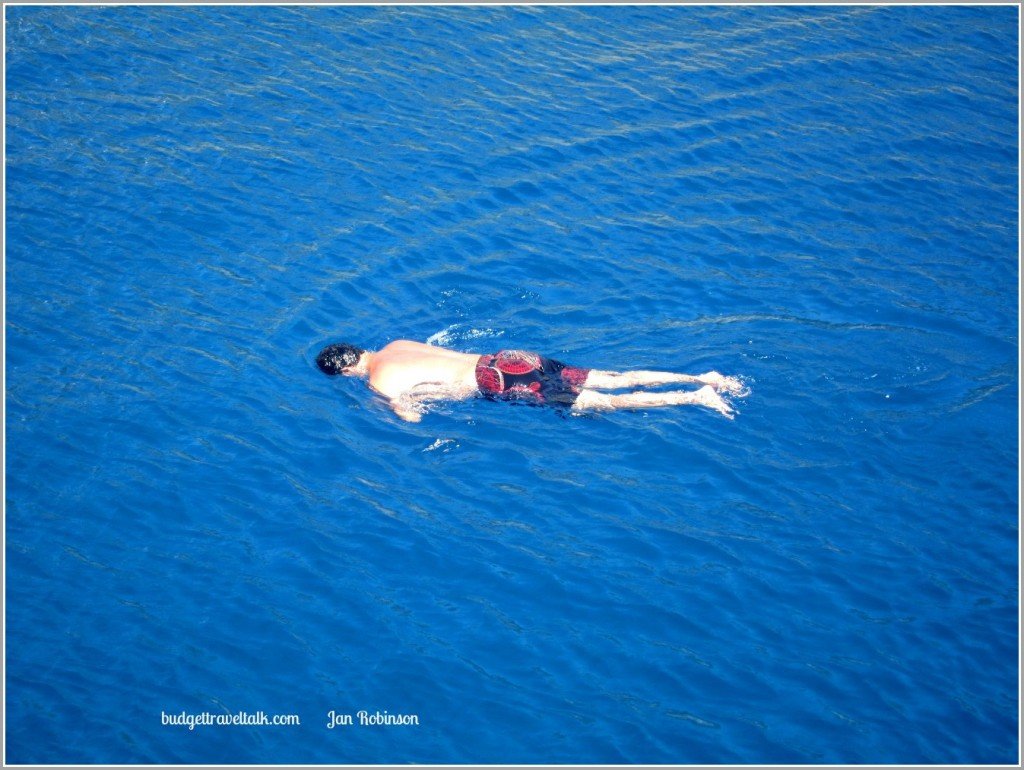 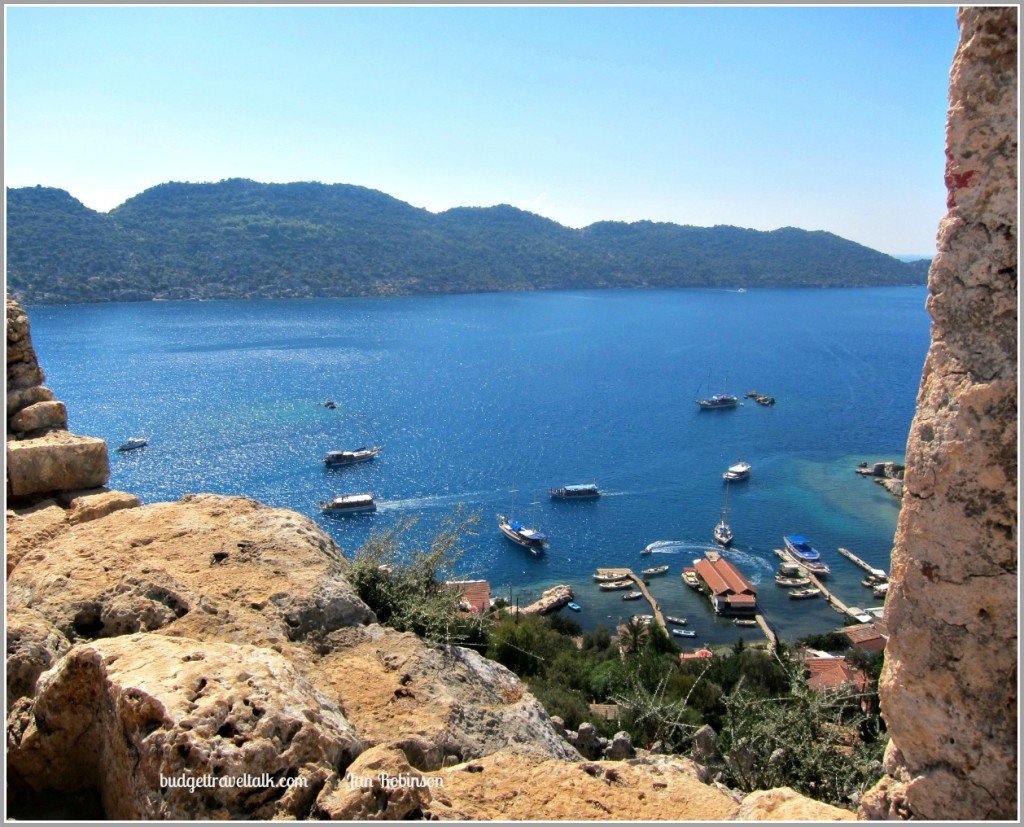 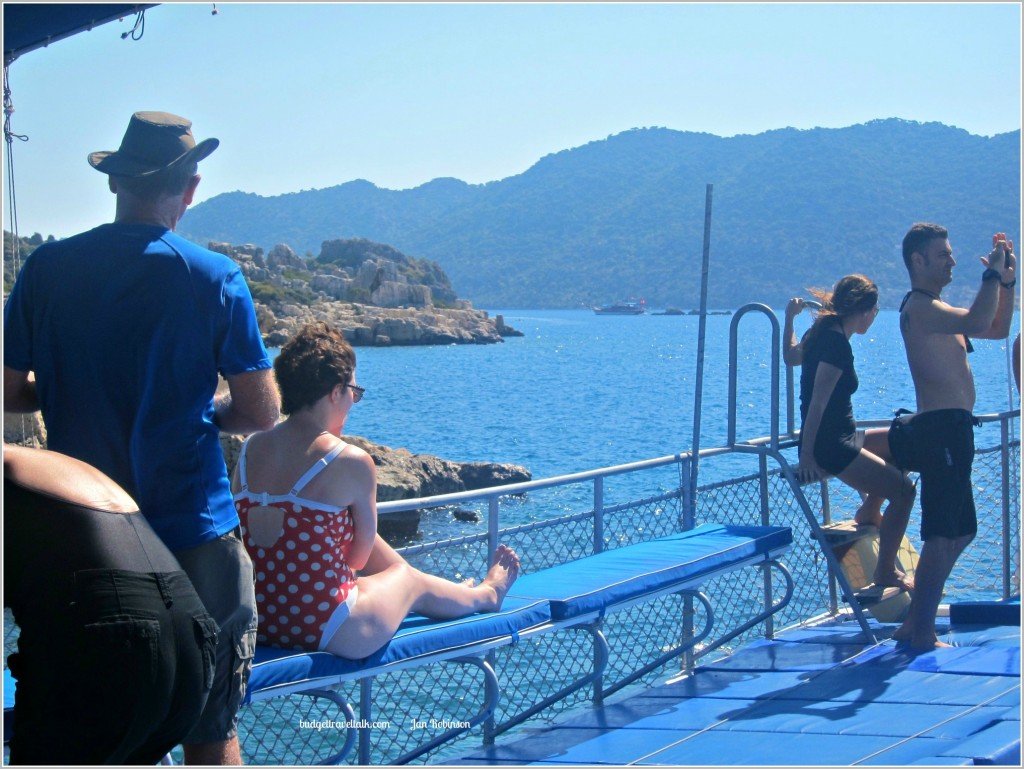 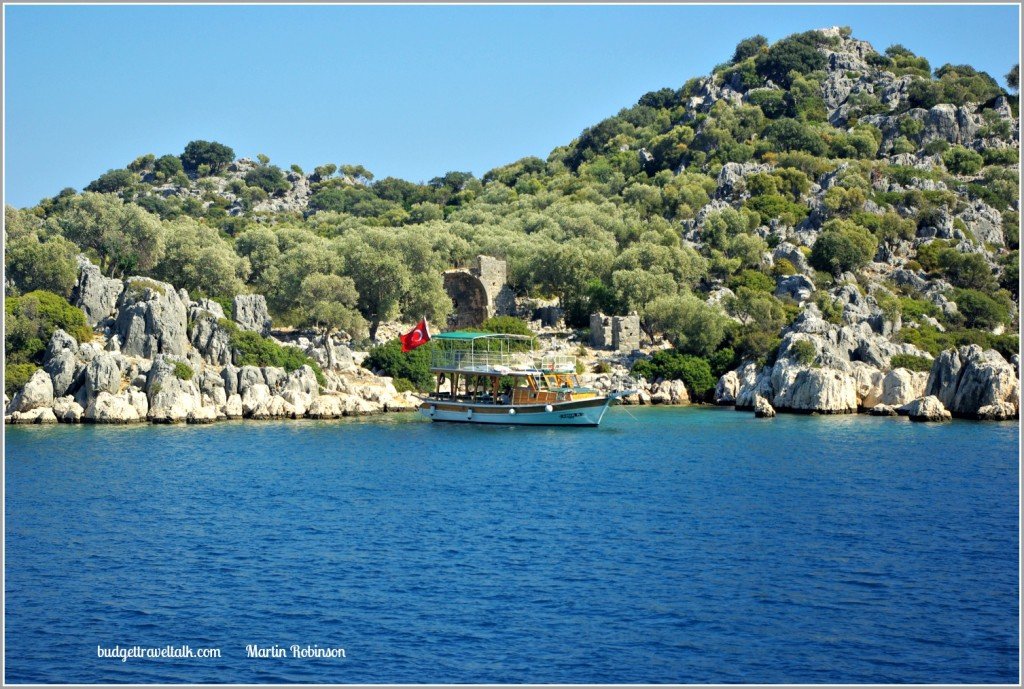 These photos were taken on the Kekova boat trip from Kas in Southern Turkey.  A boat journey is one of our favourite ways of exploring, followed closely by a day long BICYCLE TOUR.

In season the boats leave from Kas Harbour, but in Autumn the winds were too strong, so the company’s bus dropped us at Ücagiz where we joined the boat.

There were a gazillion boat companies offering boat tours of Kekova from Kas.  We chose one that claimed to have bigger glass panels in the bottom of the boat for viewing of the sunken ruins.  That was their selling point.  On the day however due to the low numbers a couple of tours combined and we all ended up on another boat – one that had the smaller viewing panels.  Sigh.

The underwater ruins were the draw-card and to be honest on the day we did not see many along the outside of Kekova Island.  The boat travelled slowly over the area of the ruins but for some reason, maybe tides or water quality, it just was not what we were expecting.  We did see a few pieces of pottery but that was all.  Maybe we were too close and so could not recognize the larger columns and walls for what they were.  On the plus side, the Lycian ruins in the nearby pocket-sized bay were fantastic.

My swimming is hardly of Olympic standard and the sight of me gallantly side stroking to shore while holding my sandals overhead would no doubt have provided free amusement.   Our energetic guide swam ashore first to show us just how easy it was.  There’s always one.

Once on shore, nimbly climbing over sharp rocks in our sandals, we were impressed by the everyday ancient structures still standing and the few of us spread out and explored happily.  The poor viewing of the main sunken ruins was easily forgotten when a walk along the rocks by the water’s edge revealed buildings in the water beneath.  Ah, the sweet feeling of the discovery!  I kindly gave my sandals to my husband for the swim back.

The climb to the Fortress above Kaleköy (Simena) was well worth it.  If you are on a boat tour you will be given the choice – do it.  The tiniest ancient theatre at the summit was hewn on-site from the natural rock and the acoustics were of course amazing.  I have read differing reports of how many people the theatre holds, 300, 200 – I would think 100 at most.  From the summit you could easily see Lycian tombs scattered all over the hillside and in the water below.  The fortress was constructed in layers – Crusader, Byzantine and Roman, we saw an ancient storage hole and strange circular markings on the ground.  I suggest taking a guide with you – ours told us amazing things about the fortress, most of which I have forgotten. 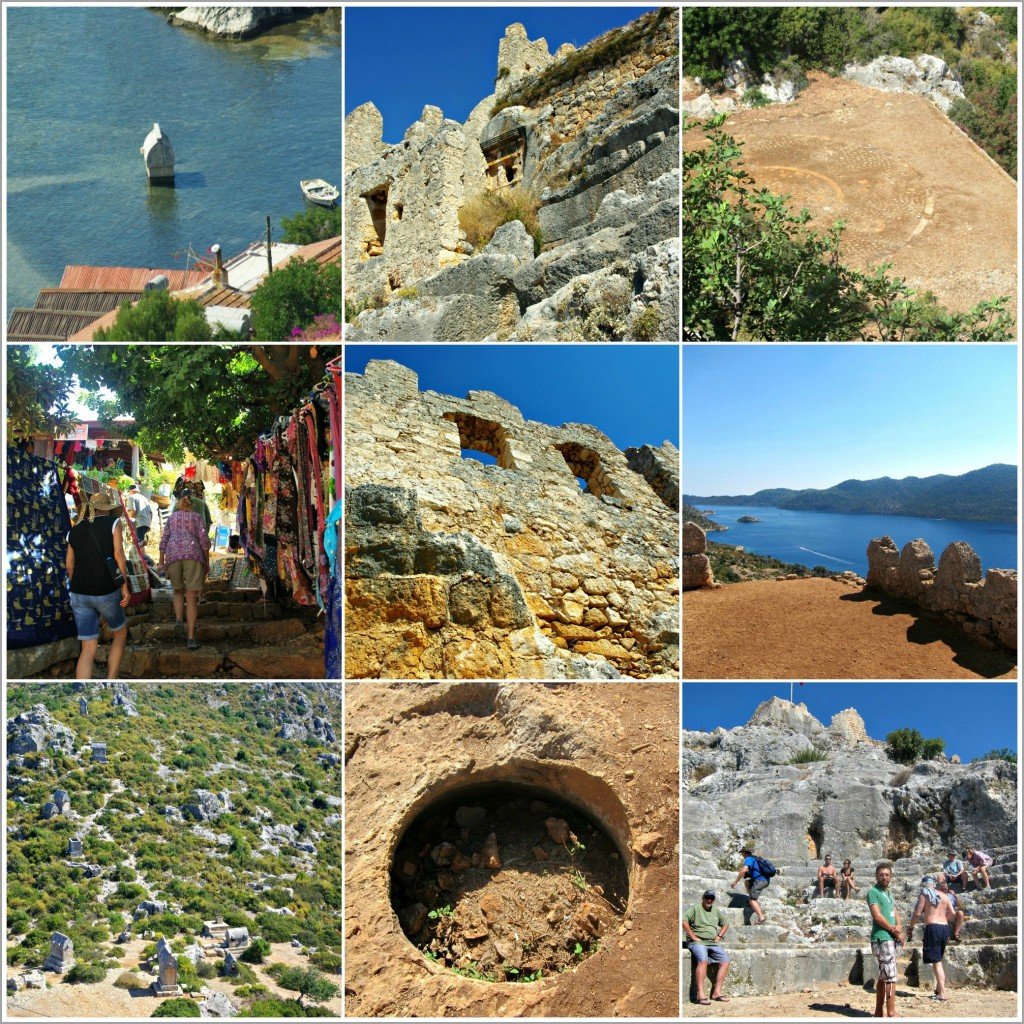 Lunch was superb.  You can see where my priorities lay in that I had no trouble at all recalling the food.  The sea air always makes me ravenous and I attacked lunch with gusto.  Char-grilled Chicken kebabs from the BBQ on the back deck were served in the main cabin – and the salads!  Red rice/Pasta/Tomato Coleslaw/cold Stuffed Peppers and the piece de resistance – a wondrous cold Potato Chip salad with yoghurt herb dressing.  I have never seen potato chips used so adventurously as in Turkey! 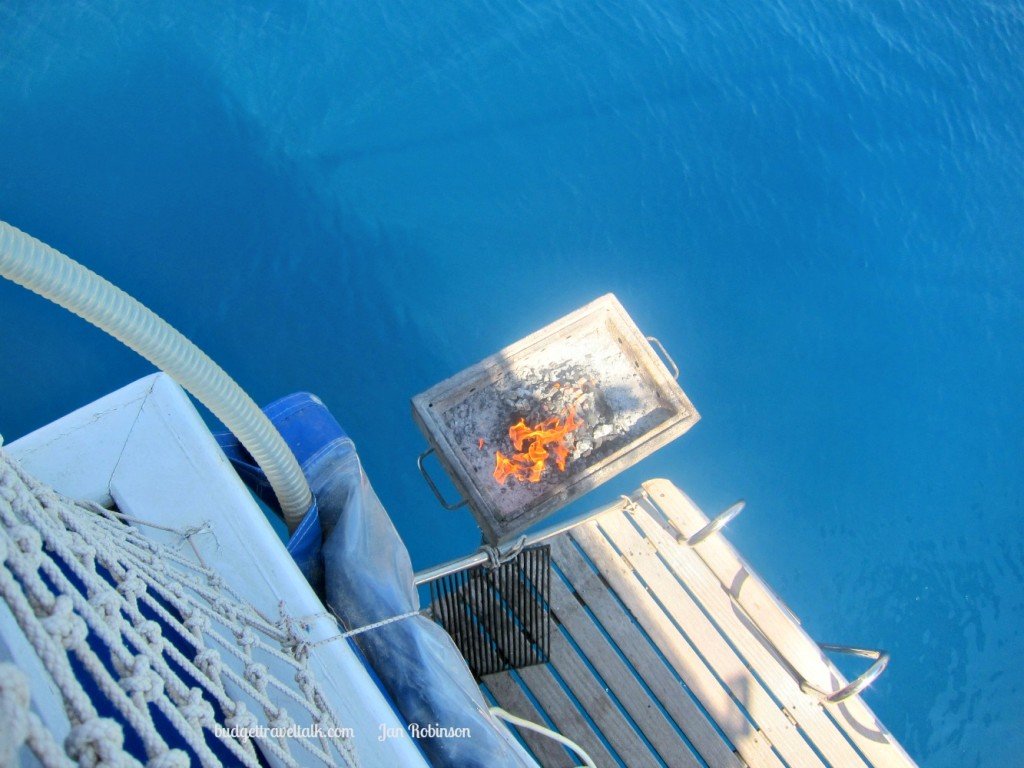 Inside a Cave.  In the below photo, all the people in the shadow are on the boat deck which was expertly manouevred into a cave. 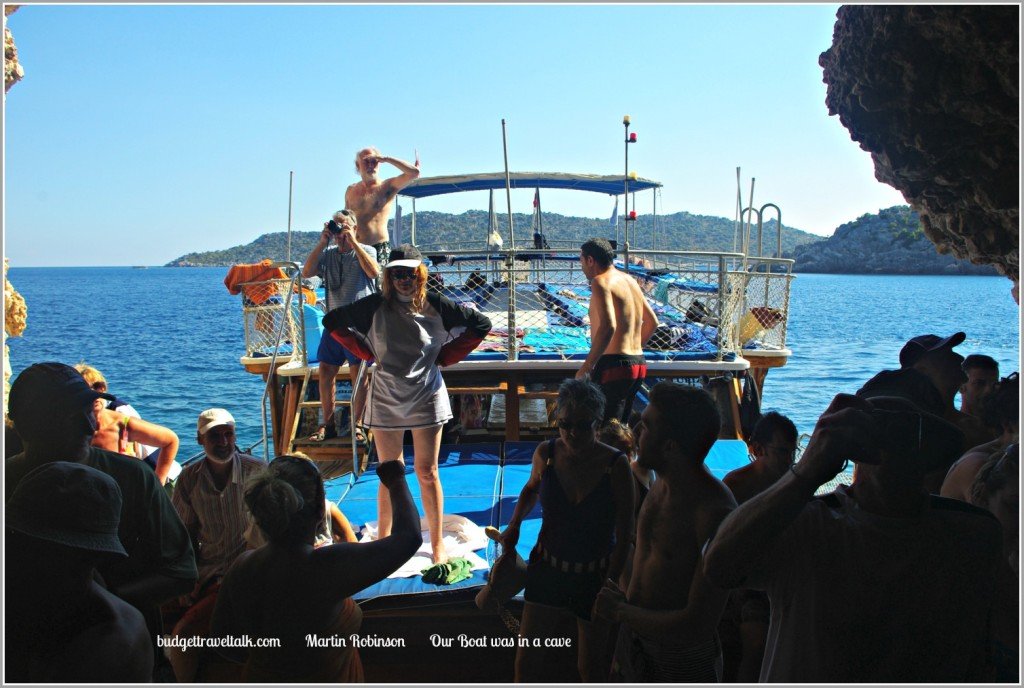 In another cove we were invited to swim ashore for an unusual experience, hmm..  once again our guide preceded us and was standing in the shallow water holding a bucket – we guessed the water would be either hot or cold – it was cold from an underwater spring  – dribbled slowly over our heads!   Banana boating behind a ski boat was available in a larger bay(extra charge) and involved lots of laughing and screaming.  I can imagine in season with lots of boats on the water that would be a tad annoying – those who did it had a ball.

The best part of the Experience for me was definitely swimming in the blue blue Turkish Mediterranean. 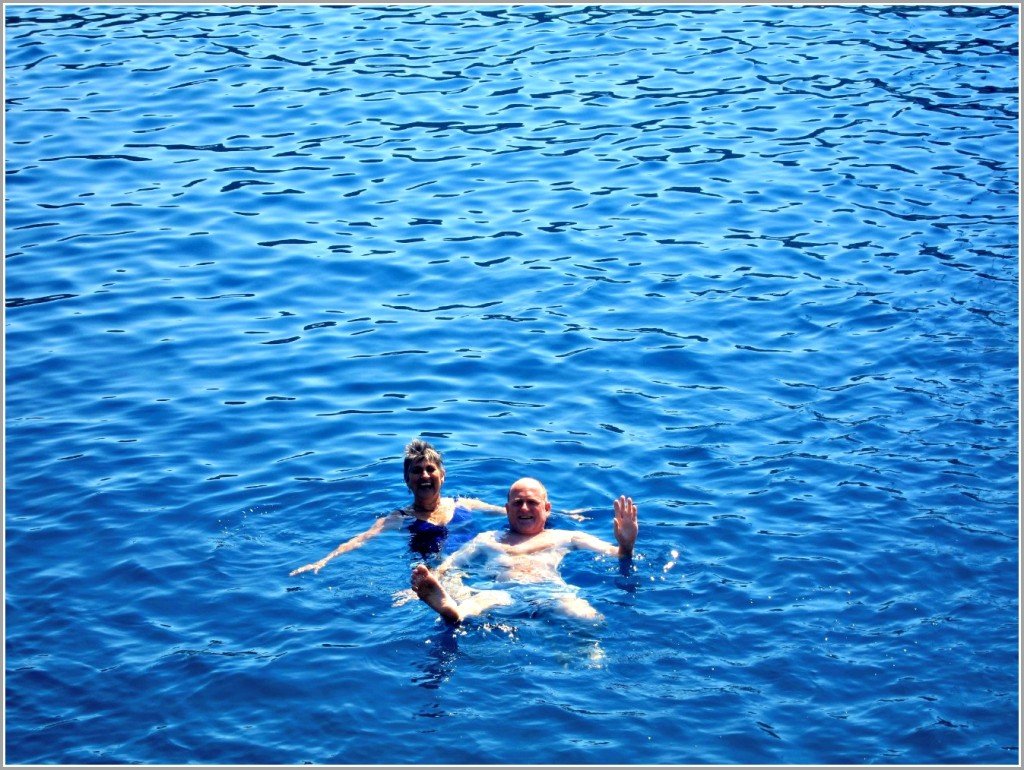 Even though we were at the end of the tourist season the water was pleasantly warm and in some bays there was just our boat.

When our boat arrived at the bay with the ruins there was already another boat inside which meant we had a long way to swim.  Swim shoes that you could also use on shore would be great.

Colours have not been altered in the above photographs.  The different blues are due to two different cameras being used, the height of the shot and depth of the water.