Day 2 of our Eastern Turkey journey, saw Birol of Greenpiece Camping and Pansiyon suggesting we retrace our steps 7km down the road to Ispir to visit the Georgian church at Tekkale.  We did not have it in our hearts to revisit that particular 7 km of road, so when he then suggested the Church at Barhal we went for it.  Unfortunately it would mean a return journey to Yusufeli, doubling the distance (54km) and time taken.

But first of all it was Menemen for breakfast at Arzet Lokantasi.  Marty ordered it as well, so this time it arrived on a large serving plate with two forks – Menemen to share 🙂  Beaten eggs, Spicy, cheesy, with lots of tasty cooked tomatoes in the mix.

Yusufeli 2006 – The buildings back on to the river. 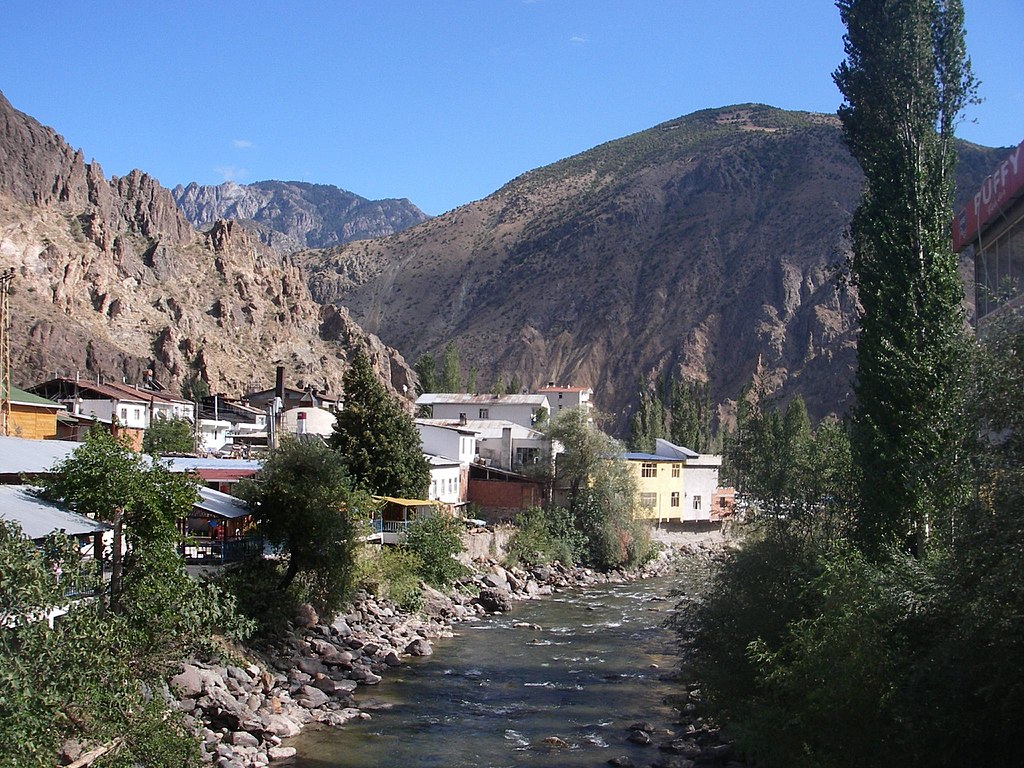 Just outside Yusufeli to the left of the Barhal road,  Kisporot Kalesi sat like a crown on a hill, but did not appear accessible.  We followed the river, twisting and winding our way through the hills, snatching glimpses of farms snuggled tight against the river below.  Occasionally clusters of houses formed villages and rustic bridges provided a lifeline. 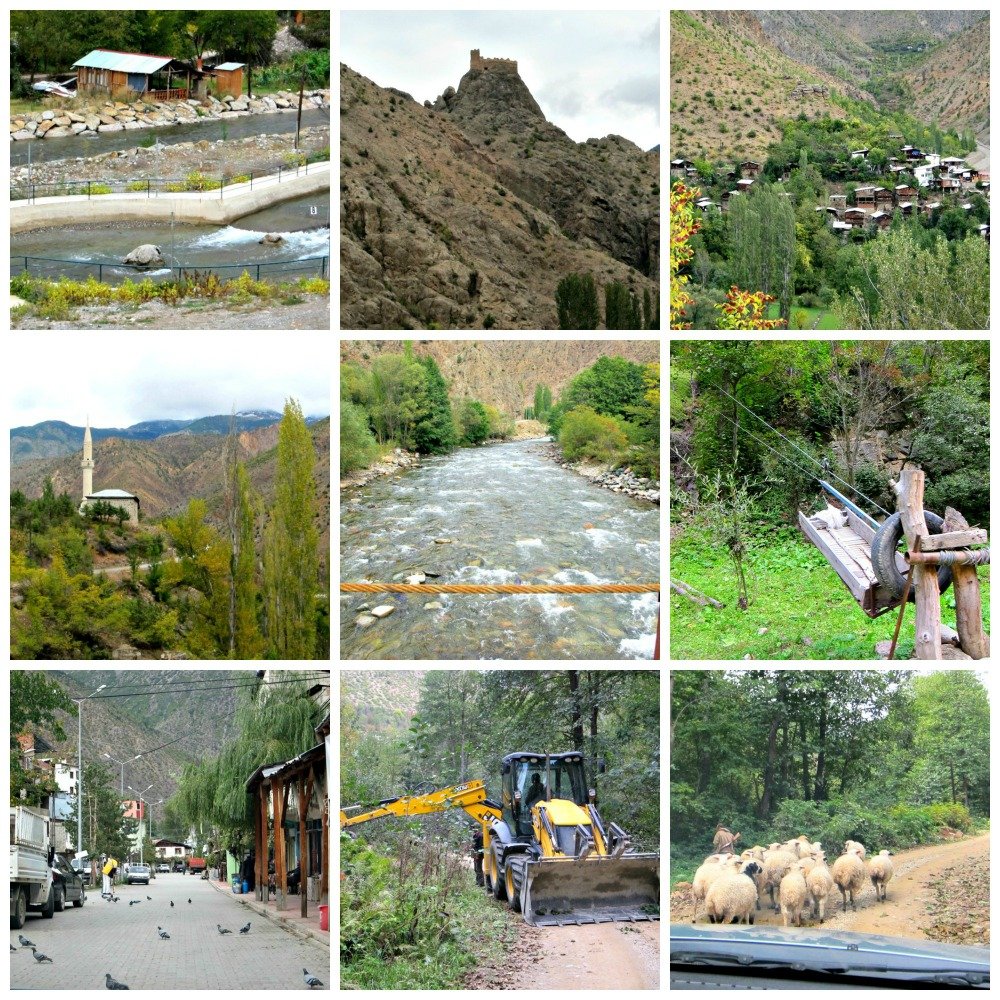 We read there was a possibility of encountering brown bears, wolves or wild boars in the hills around Barhal.  Which do you think the Shepherd was protecting his flock from?

The Church dedicated to John the Baptist, and located 1km past Barhal was locked, but Karahan Pansiyon which overlooked it, could possibly have provided entry.  The pansiyon receives great reviews for friendliness, food and the Apiary fresh honey provided by the Pansiyon’s own bees, and has basic rooms catering mainly to hikers (it takes four days to hike over the Kackar Mountains to Ayder).  For three centuries and until recently Barhal church was used as a mosque.  The church/mosque was squashed into a tiny space making it difficult to photograph.  A climb into the hills would provide a better outlook. 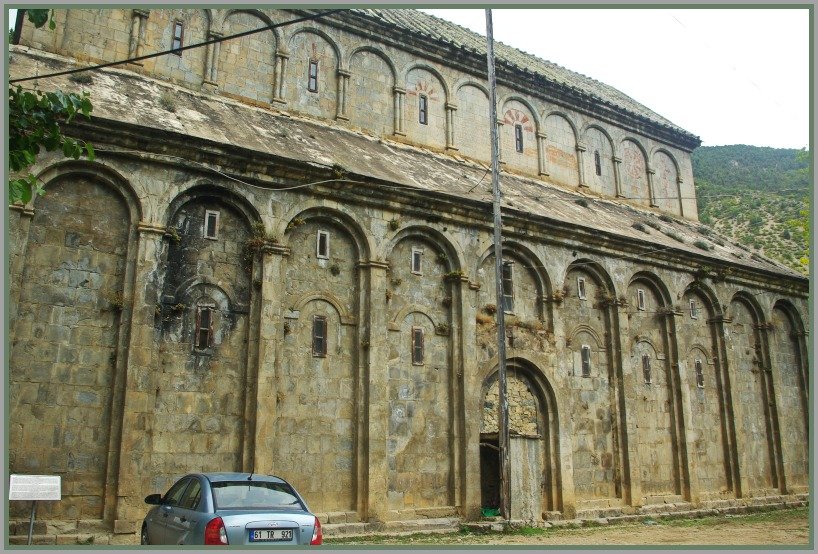 Now familiar with the road, it wasn’t long before we were back in Yusufeli ordering lunch at our favourite.  The white hairdryer near the roasting pit (below) ingeniously provided a blast of hot air to make the fire spring to life.  We had enjoyed our very brief stay in Yusufeli but The Mother of God Church at Ishan was calling. 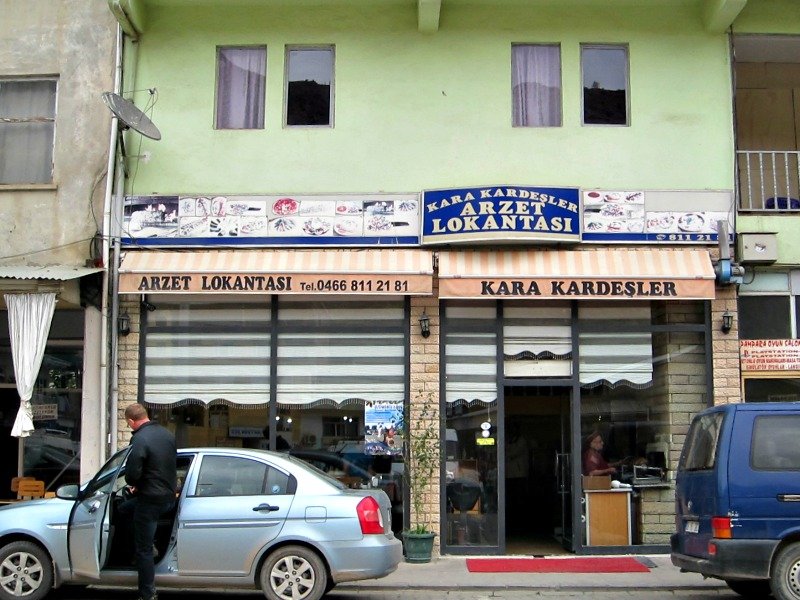 Ishan Kilisesi dedicated to the Mother of God.

After 9 km the Yusufeli Road joined the Artvin-Erzurum road and turning right we followed the Ishan Kilisesi signs for another 21 km.  The final 7km into the mountains was on a recently graded dirt road (known to be slippery after rain).  That particular mountain drive was utterly spectacular.  The colours ranged from yellow through browns and reds to distant blues.  At the summit the road led through a seemingly deserted village and there in a dip behind the mosque sat the church. 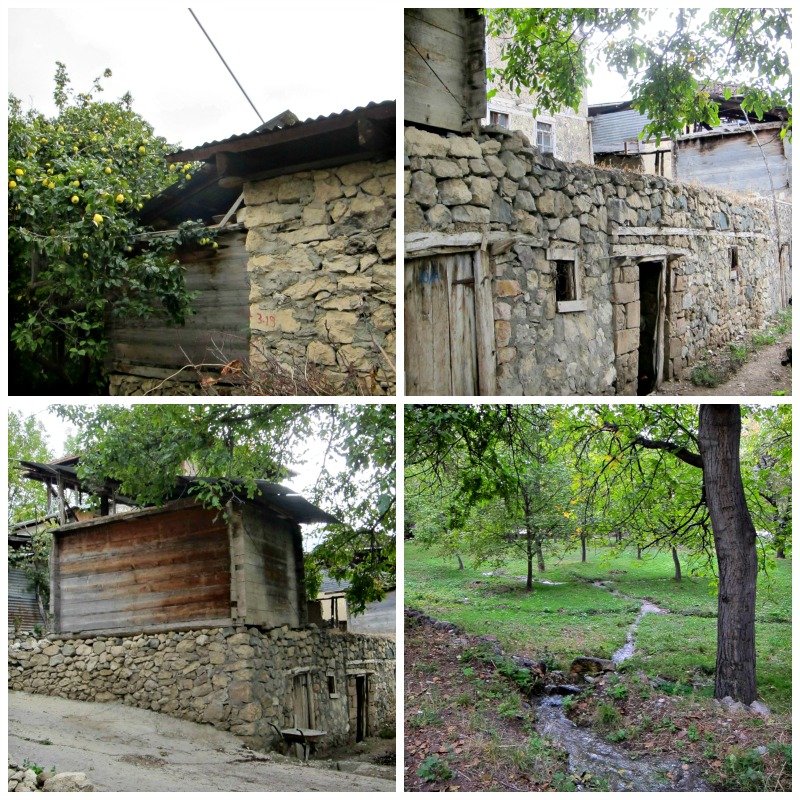 Whereas the church at Barhal had been dark and sombre, this one was light and fanciful but once again we were denied entry, this time by massive restoration work behind a locked perimeter fence.  On our way downhill we passed a man herding his handsome cattle conveniently along the inner edge of the road.  Of all the cattle we passed in Turkey these won the prize for “Best Behaved”.  We had spied him from far up the mountain while taking photos, the bald hills revealing all.  Back on the main road we turned south toward a lake formed by huge landslides three centuries ago.  Looking down to the strange waters of Tortum Gölü, we were blasted by cold winds from the nearby snowy peaks. 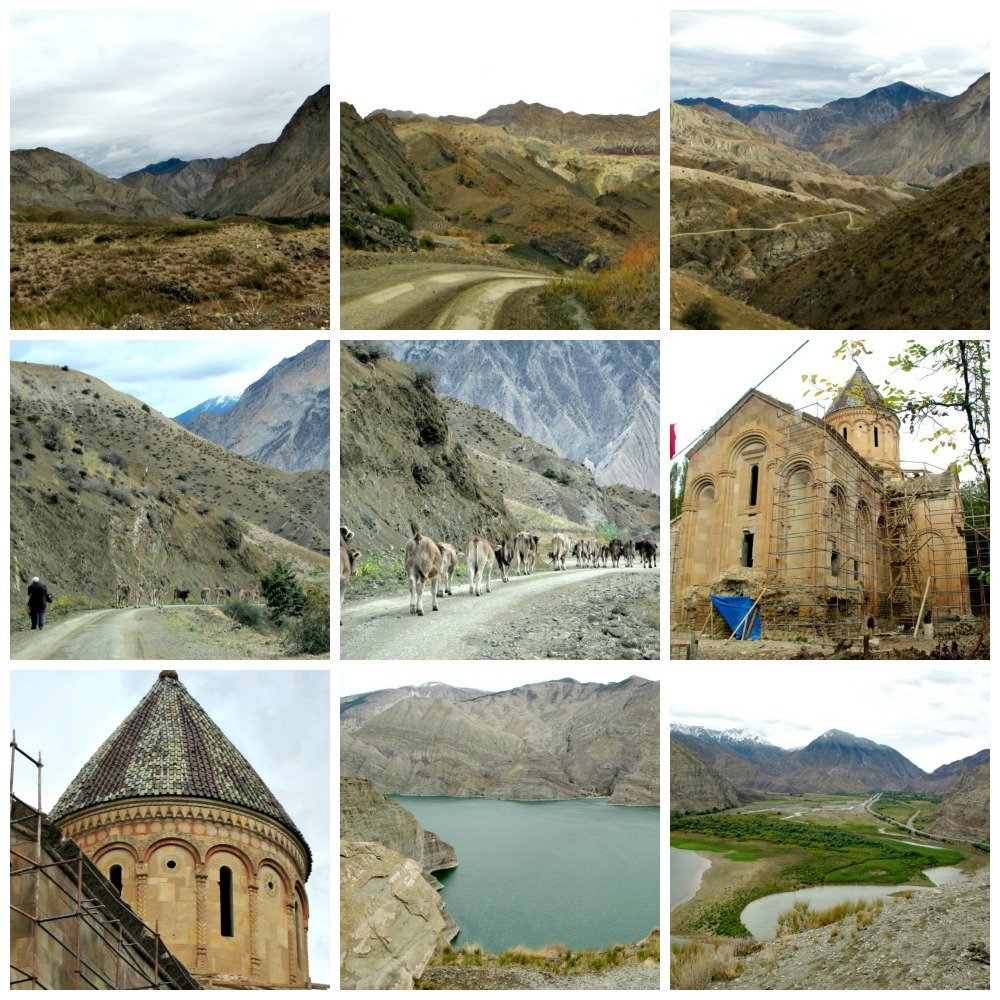 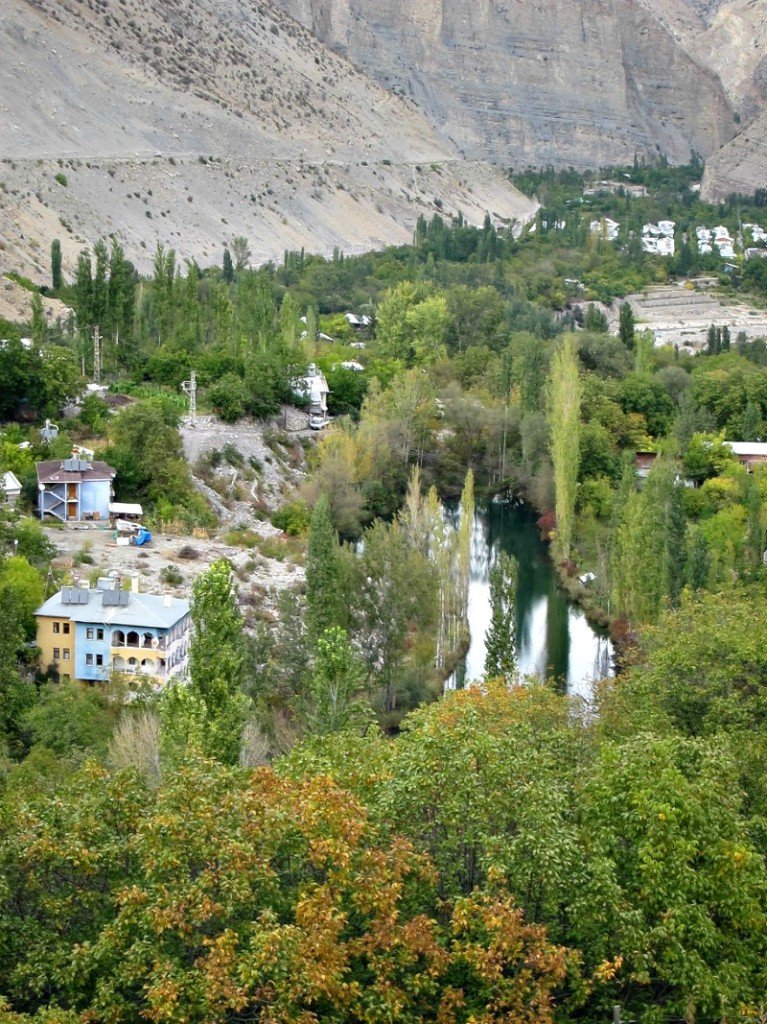 The afternoon was galloping by and we were yet to see the inside of a Church. A further 8km down the highway we turned right onto the type of road that brings out the inner rally driver. There were pretty views of poplar trees and autumn foliage as we moved deep into a valley surrounded by snowy peaks. 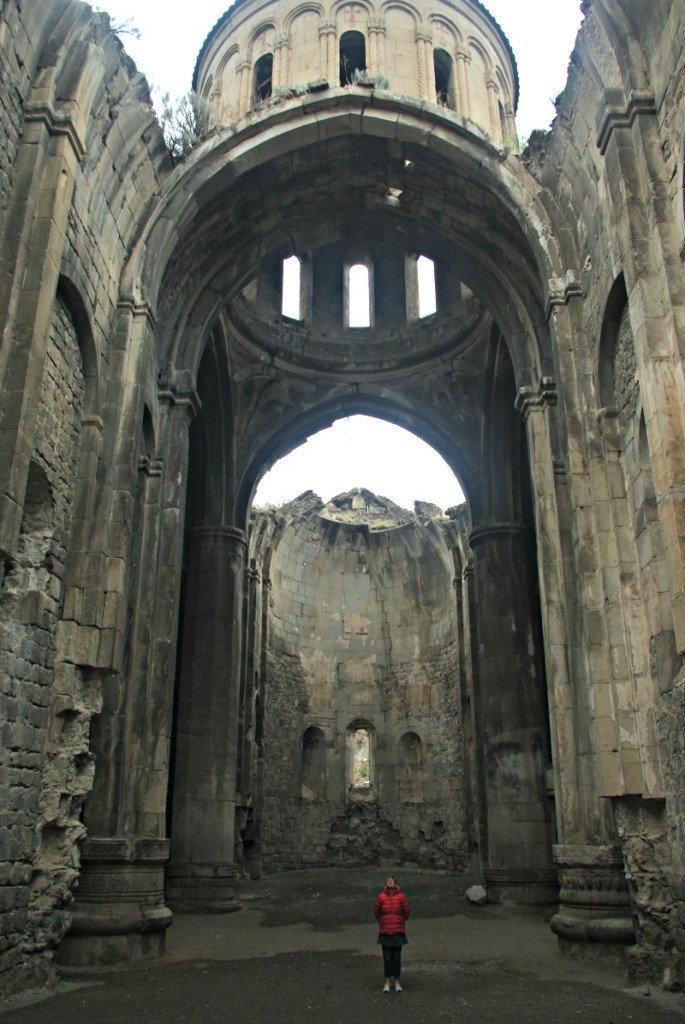 We noticed the same red markings on the exterior of the Barhal Church.

There were the remains of frescoes high up on the inside walls, and detailed carvings on the pillars of this three aisled basilica. 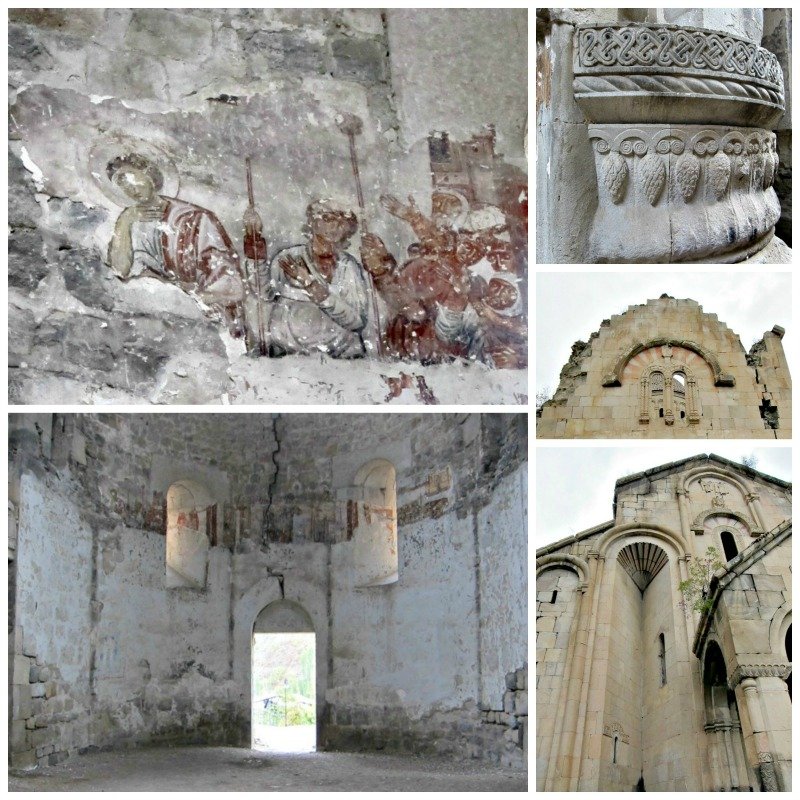 Yusufeli Tourist Bureau was located opposite Arzet Lokantasi to the right of the Otogar, but was only open Weekdays.

No Church Entrance Fees were charged.

The incumbent mayor of Istanbul, Kadir Topbas was born in Yusufeli.  Elections will be held 0n 30th March, 2014.

When to Visit the Black Sea Coast and Eastern Turkey and a Road Trip Surprise.