Before we can begin to think about Hanoi Things to Do we must learn how to cross the road in Hanoi and indeed Vietnam.

How to Cross the Road in Vietnam

Stand on the footpath and look both ways (traffic can come from any direction), when there is a lull in the traffic, however small, step onto the road, stick your arm up in the air, pointing slightly toward the oncoming traffic, so you can be better seen, even wiggle it around if you don’t feel too silly.  Keep a slow, steady pace, and motorbikes will flow around you.  Cars and trucks can’t do that, so it is up to you to not step in front of them.  It is quite easy, you can see them coming, just pace yourself.  Traffic is chaotic but it is slow and the Vietnamese are great at avoiding you.  Have faith, and by all means wait for a local to cross, then stick to them like glue – but promise me you won’t hold their hand! OK?

On day two Jake suggested we visit Ngoc Son temple in Hoan Kiem Lake, by ourselves!  Yes, this was our test, and it involved crossing several roads.  The main one bordered the lake and the first time we crossed, it was mid-morning, so the traffic was not thick, but steady… well … it was fairly light.   We applied all the principles, with strictly no holding of locals hands, and we made it easily.  We were naturals!

Things to do in Hanoi

Ngoc  Son Temple in Hoan Kiem Lake – Admission 3000 dong (15c)
A lot of people visit this temple – I will not say all, as I know there is a die-hard out there somewhere who would rather cut off a leg than step inside, but you get the idea.  The Huc Bridge (Rising Sun bridge) is painted red (an auspicious colour) and is so popular that admission to the temple is paid before you cross the bridge.  I am surprised the hand rails of the bridge have survived the millions who have posed against them!

A giant (read 250 kg and 2.1 m long) stuffed sword-lake turtle,  resides inside the temple complex and the red folding temple doors open onto a courtyard and the lake. There is also a gift shop in true entrepreneurial fashion, which sells small items such as bracelets as well as much bigger things, like statues.   The incense that wafted up the noses of worshippers and tourists alike, set the scene.

The last descendant of the stuffed tortoise died 19th January 2016.

Before then it was captured in a Special Forces manoeuvre and treated on an island in the middle of the lake.  I would need treating too if I lived in the pea green soup that poses as lake water.  It’s capture was truly amazing, as the tortoise had Loch Ness monster status in Hanoi. 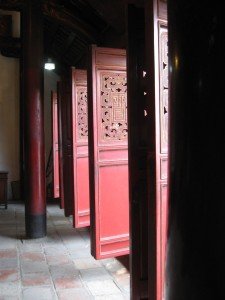 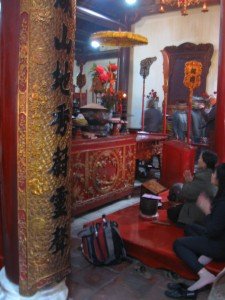 To familiarize ourselves we decided to do the Lonely Planet walk.  We usually end up doing them back to front, which is a bit of a challenge, but we happened to be near the start of this one, so we did it in the correct sequence, well sort of.  It led us through a good portion of the Old Quarter and told us what to look out for on the way.  Just walking the streets was amazing, but having that little bit of insider information made it even more interesting.

We watched a calligrapher at work.  It was fascinating and the house had a soul saving calmness about it.  There was an interesting old toilet out back (not in use today) and looking up from the courtyard revealed a shade cover that was surely a pre-cursor to the current influx of colourful umbrellas in street locations around the world in 2018. 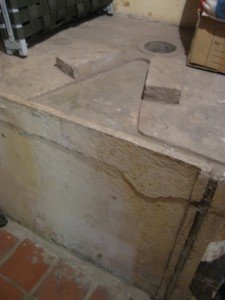 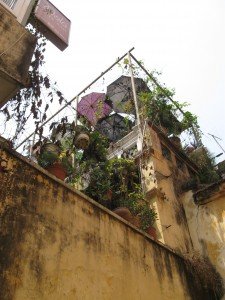 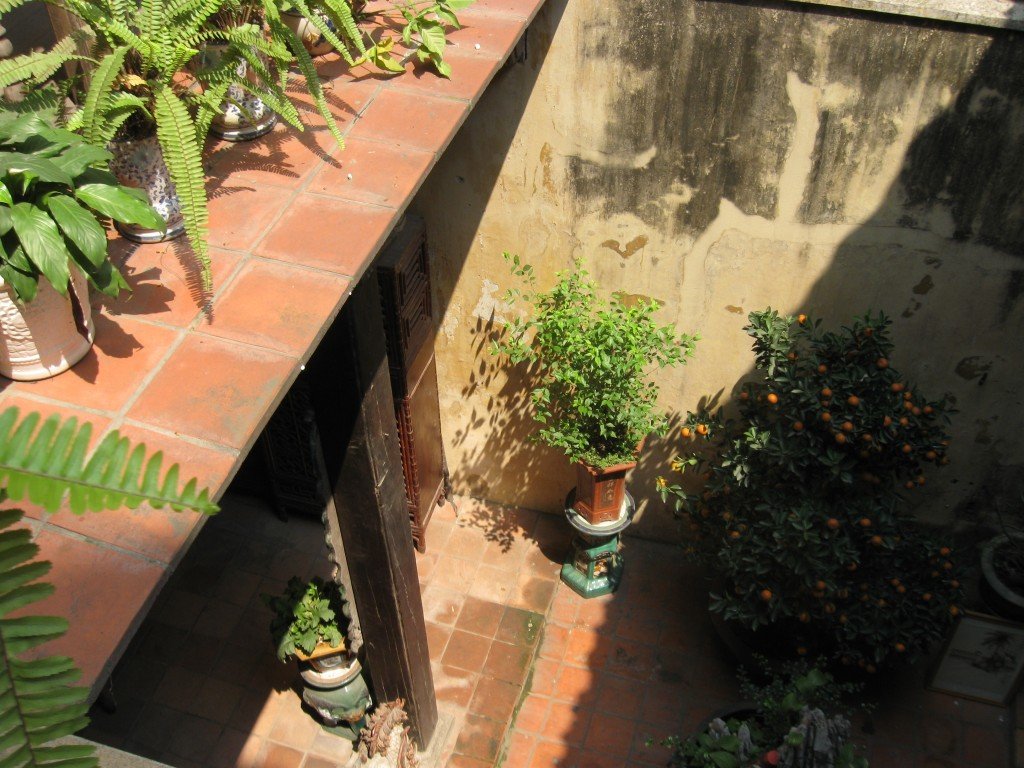 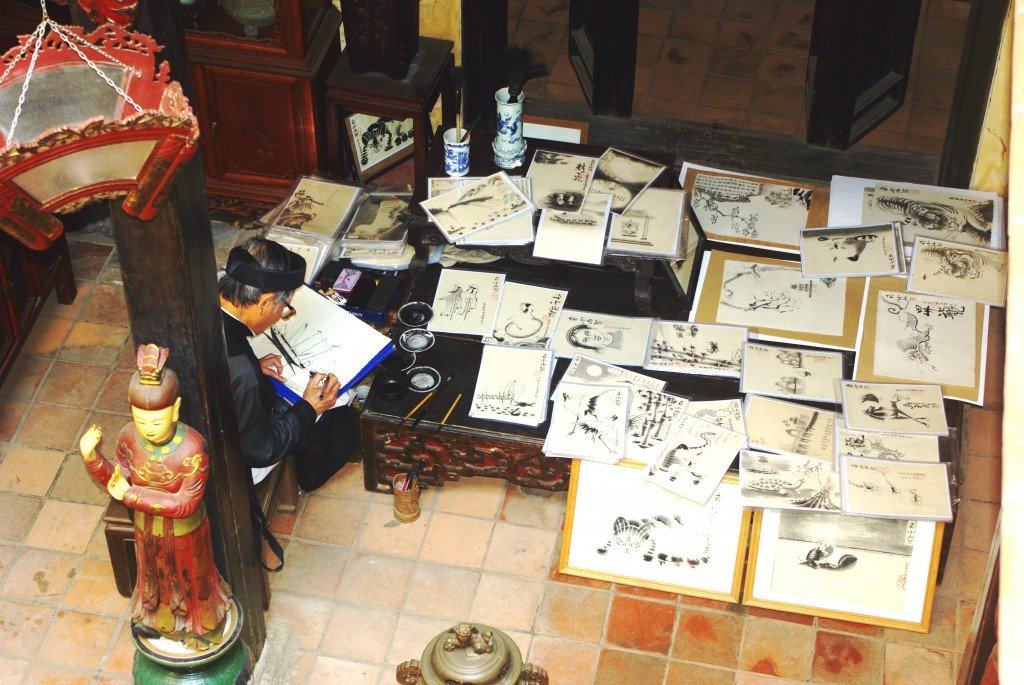 On one of the higher levels, we came across a smorgasboard of dishes set out on long folding tables in a quasi cafeteria.  We grabbed a plate and helped ourselves to the dishes set out on the table.  At the end of the table the cashier sat on a stool behind his cash register.  He looked over our plates, gave us the once over as well and decided on a price.  Mine was 20,000 dong (approx $1).  The food was passable and the experience was well worth it. 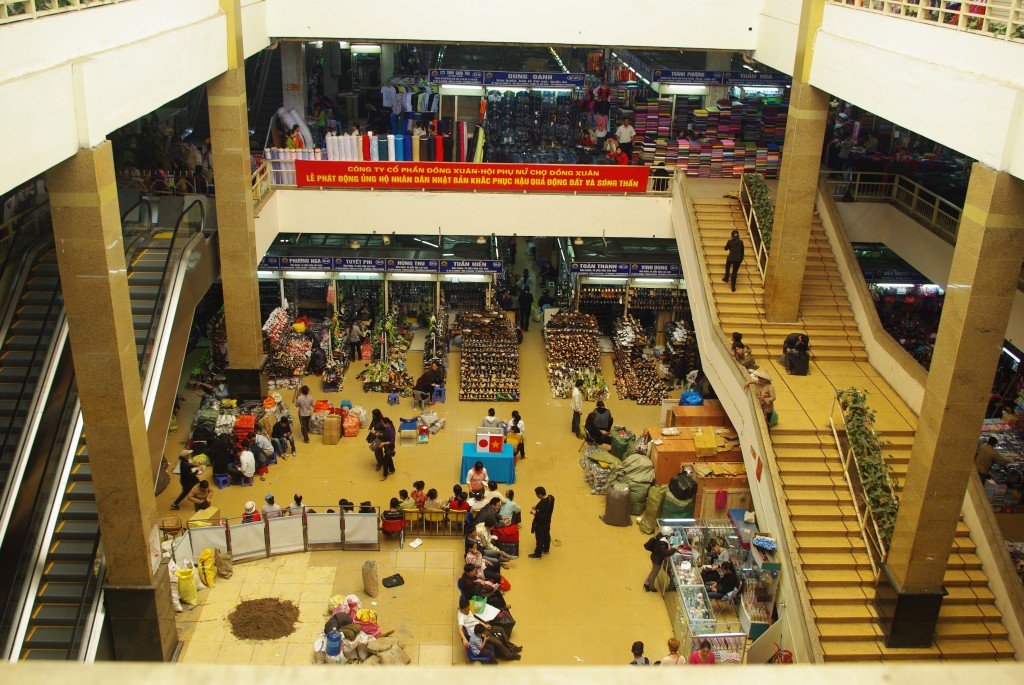 The streets that led up to the undercover market contained more local markets that were full of interesting food choices. 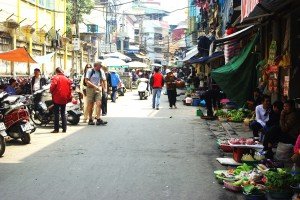 These Roti are not like Indian Roti.  They are enclosed in pastry with a soft sweet inner dough and a chewy texture with a tantalising hint of unfamiliar spice.

Marty and Jake were immediately hooked and tried to veer past Papa Roti whenever we went anywhere.  It turned out that Papa Roti is in other places in Vietnam as well – sort of like Donut King.

Much to Marty’s delight we found one in Nha Trang.  His verdict was, a little different but still good. 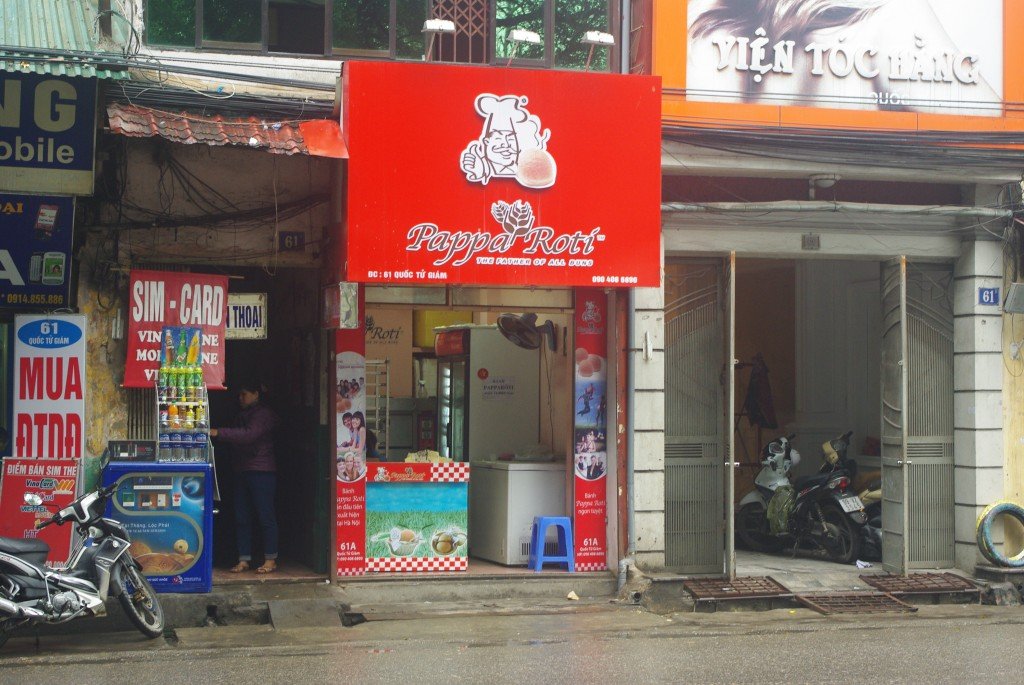 An Introduction to Vietnamese Coffee.

Vietnamese coffee has a thick layer of condensed milk in the bottom of the glass (a little too thick) and a larger layer of strong coffee on top.  It comes in a little tin coffee pot sitting atop a glass with the brew dripping down onto the condensed milk. It is stirred into a creamy, sweet, wall bouncer, best sipped slowly. 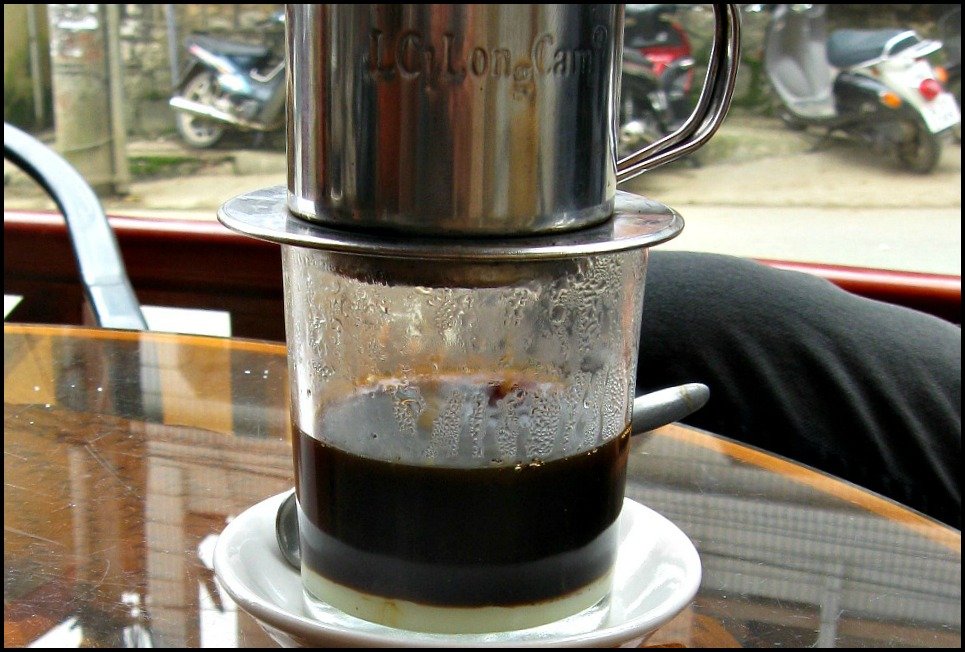 Notice that I put in that little teaser about Nha Trang, but that is a little further down the track.

This post forms part of the One Month in Vietnam series.

See you on the road, Jan.