Jovan Dučić is one of the favourite sons of Trebinje BiH.  While other notable residents were historically either sports people, performers or rebel leaders he was a teacher, turned distinguished diplomat, who was even more well-known as a writer and poet. Today he lies buried in the Church on the hill in Trebinje Bosnia (BiH being the abbreviation for Bosnia and Herzegovina.) 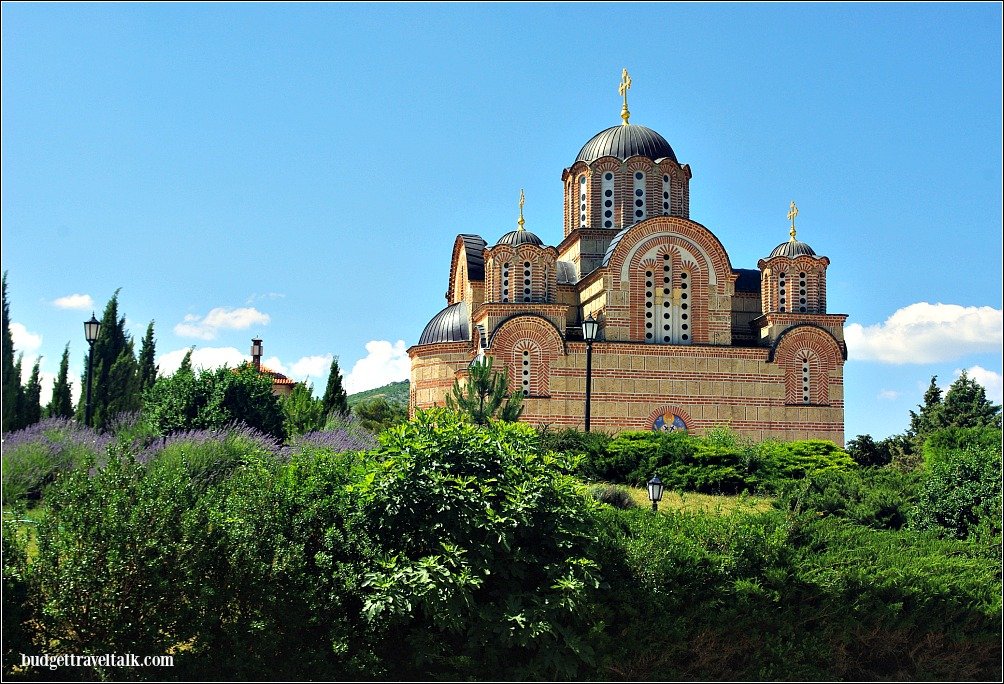 One of three outstanding Serbian lyric poets of his generation, he was exiled to America in 1941 when Germany invaded Yugoslavia. He died there in 1943 with a final wish to be buried in his hometown. It wasn’t until October 2000 that he was finally laid to rest in the newly built Gračanica church on Crkvina Hill.

Views over the Town 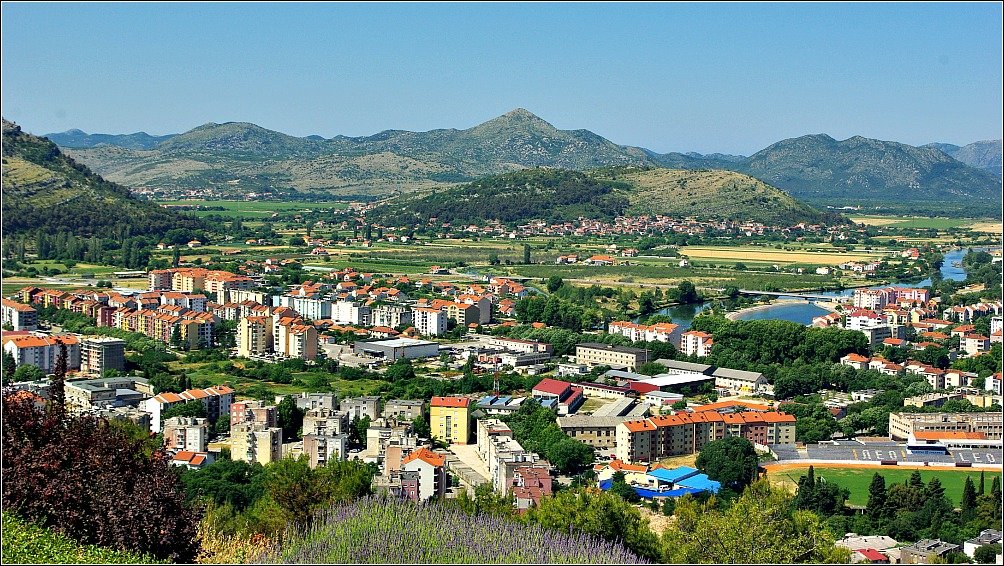 The inside of the small church is totally covered by murals painted on a rich blue background.  When we visited, sunbeams were streaming through the high windows – something I’d photographed only weeks before at St. Peter’s Basilica in the Vatican City.

Gracanica church on the hill  in Trebinje Bosnia (BiH)
[pinit] 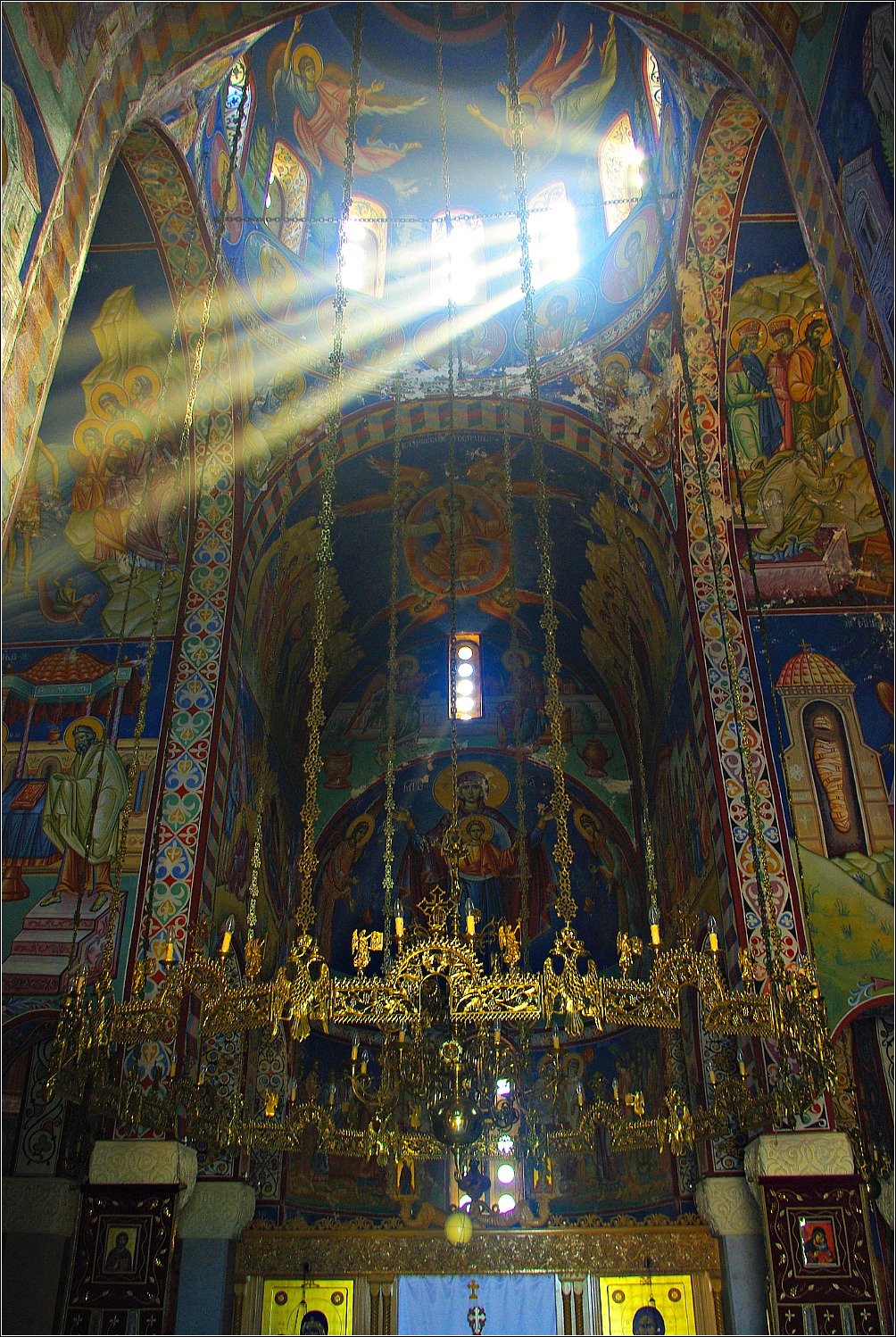 While St. Peter’s Basilica was first built in 322, Jovan is probably the oldest thing in this church apart from religious icons.  The Church was built with funds from Branko Tupanjac, a wealthy Serb in exile.

While obviously new, it is actually a faithful reproduction of the famous Monastery of Gracanica in Kosovo and Metohija – which holds symbolic importance to Serbian people.

The Church alone in a vast space. 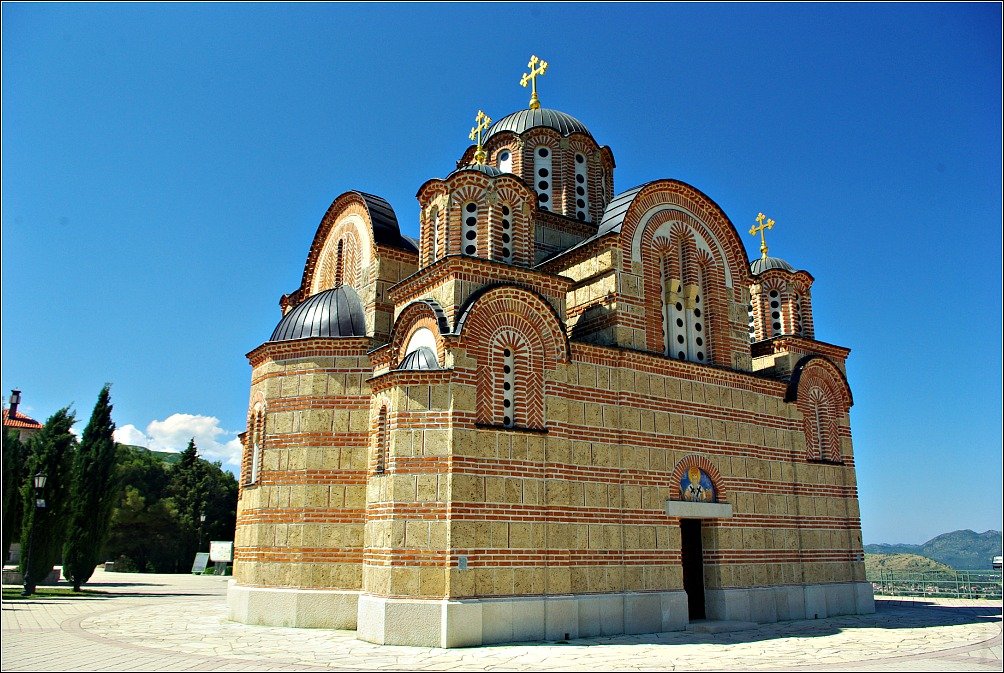 The church on the hill in Trebinje stands alone in a theatrically vast space with a matching bell tower off to one side.  Further behind that tower is a modern restaurant/cafe with extravagant town views. Although we were on a mission to get to the Bay of Kotor that day we couldn’t resist ordering coffees and enjoying them in such beautiful surrounds. 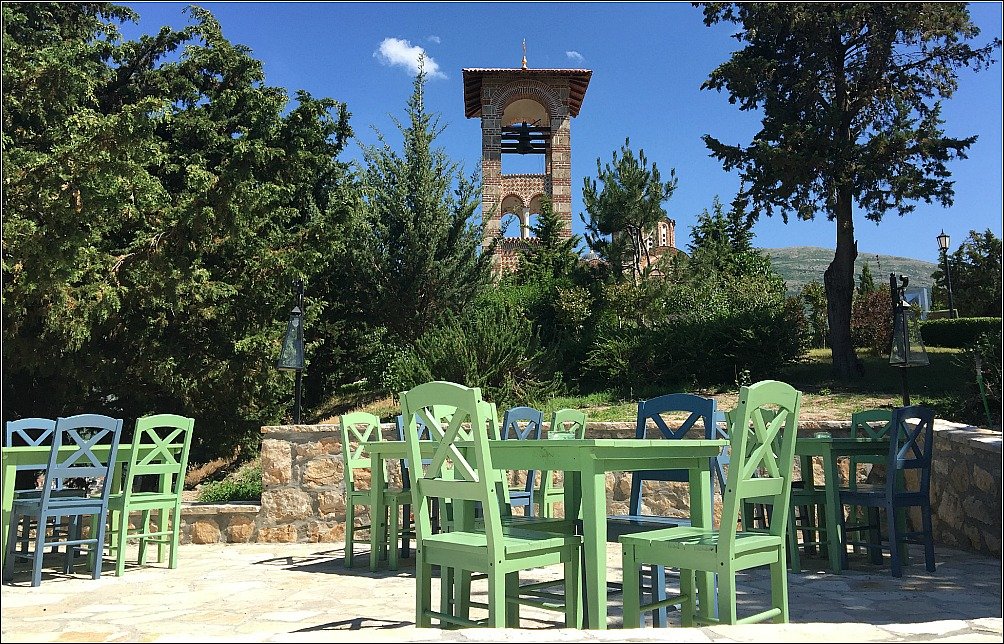 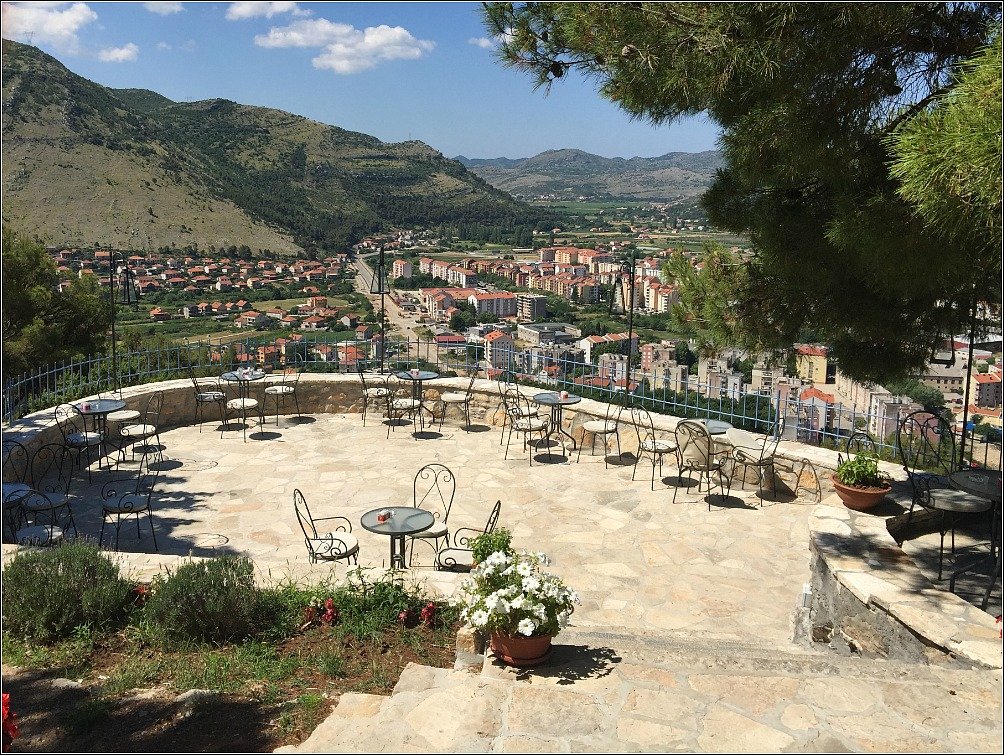 Although the complex was practically deserted during our visit there was obvious space for buses and I’m sure it does get a lot of visitors. The religious and souvenir shop accepts credit cards/Euros/BM and offers shipping. We purchased a couple of decorative bottles painted traditionally, which rightly or wrongly made a Turkish connection in my mind.

On the other side of the Souvenir Shop and parking area was a casual seating area beneath a vine covered pergola accompanied by a sad looking tethered donkey and adequately caged hens, roosters and rabbits, most likely billed as a mini-zoo. 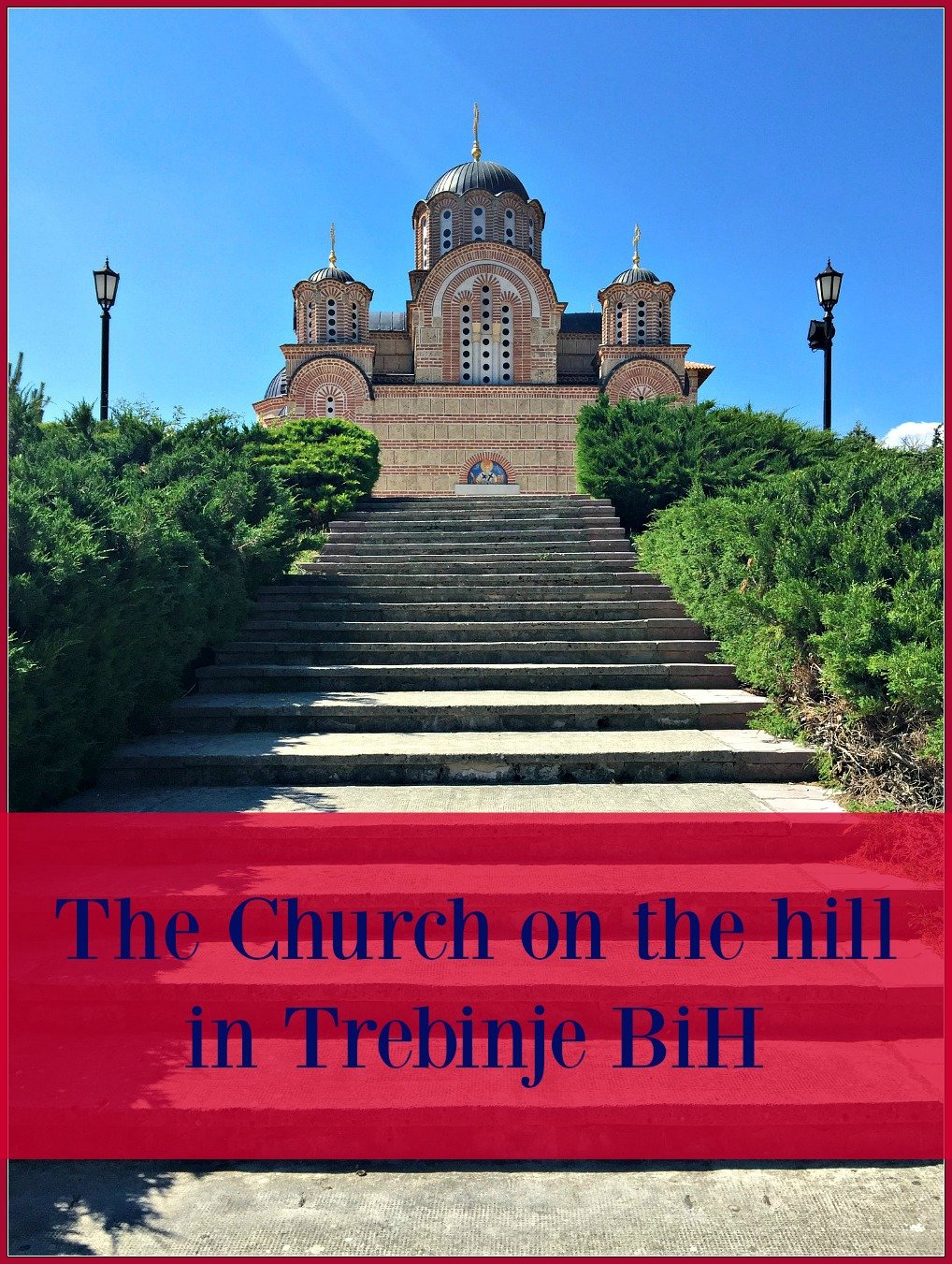 Situated at the front of the church this long staircase leads down through gardens to a small modern amphitheatre built into the hillside as if in Ancient Greece. The plastic moulded seats and atmospheric setting would provide an excellent performance space but it also provides an excellent view of the Ottoman, Arslanagić Bridge below. 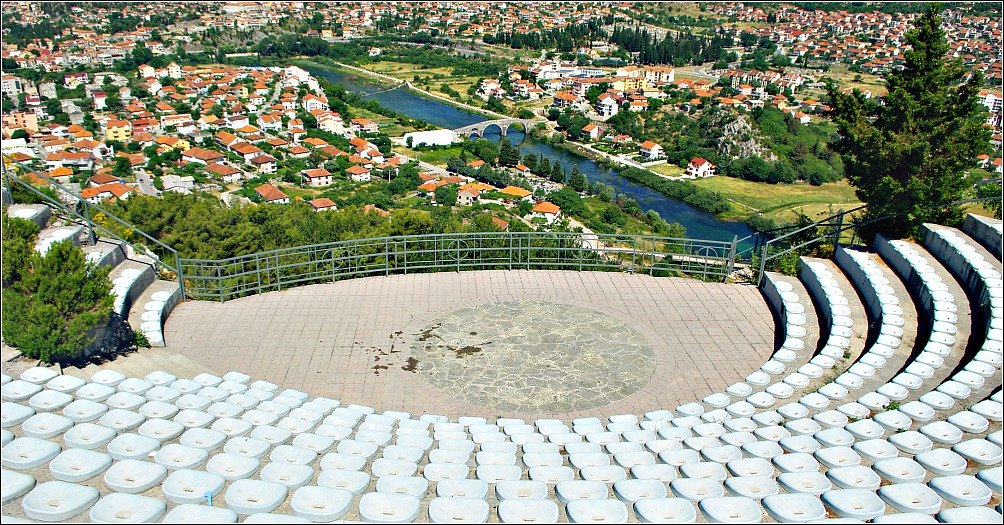 Built on the Trebišnjica River at the convergence of ancient trading routes in 1574, the bridge was moved several kilometres to this site in 1970 after the building of a hydro dam submerged it.

A visit to the church on the hill really is a must while in Trebinje.  The appeal of Europe for us often relates to antiquity and it took a while to process the concept of this new – yet old Serbian church. The landscaped complex is well maintained, the views are magnificent and with more time I would have liked to have eaten at the restaurant which promised excellent local dishes with attentive service.

We visited Trebinje as part of a road trip through Croatia, BiH and Montenegro during our Ten Weeks in Europe 2015.

Entry to the Church is Free

Coffee at the restaurant is inexpensive

The hilltop Church can be accessed by car or on foot