Arriving by train we followed the flow of people to a vast marshalling area beside the river.  While the area was practically empty in mid-November the thought of it overflowing with people was incredible. 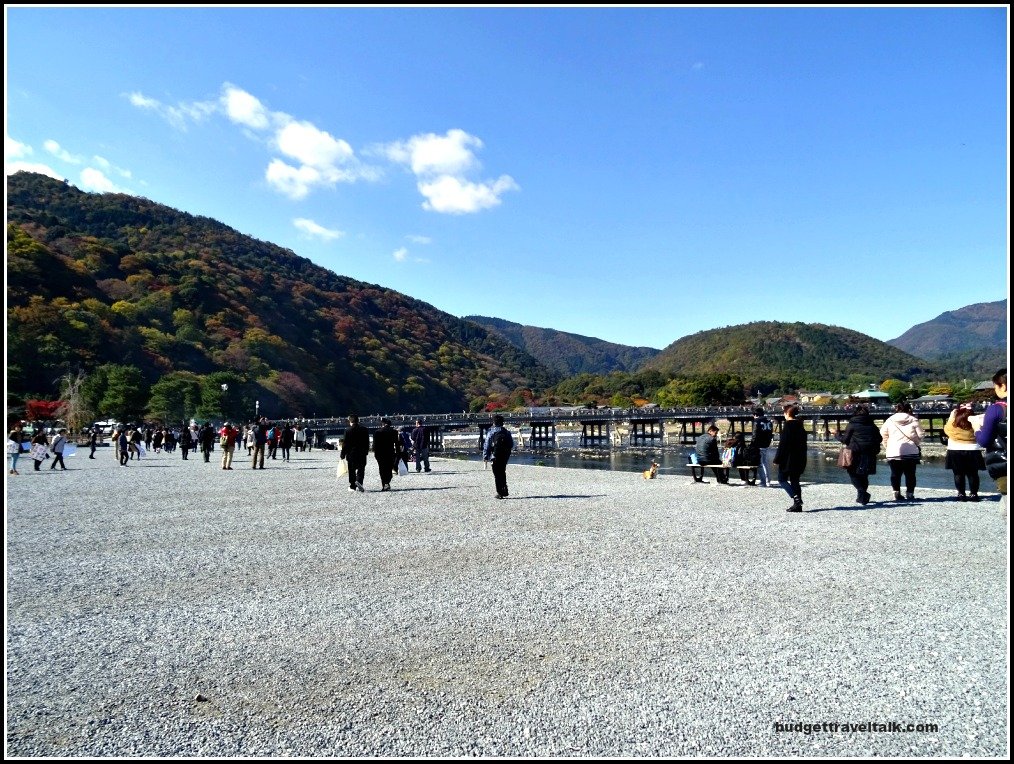 Arashiyama at the base of the Arashiyama mountains in Western Kyoto is well known for it’s rather small but impressive bamboo forest. However it is the forested hills, breaking into a patchwork of Koyo (autumn colours) that provide a stunning backdrop for the river.

As the title suggests this post is all about the river, yet the hills and the river, like non-identical twins, are intrinsically linked. 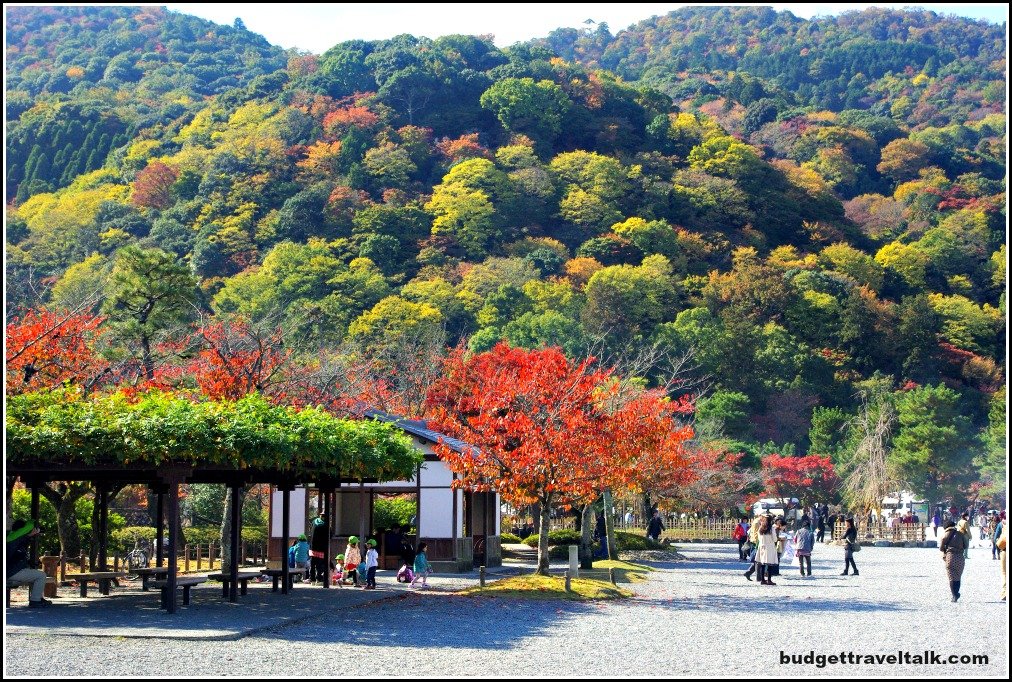 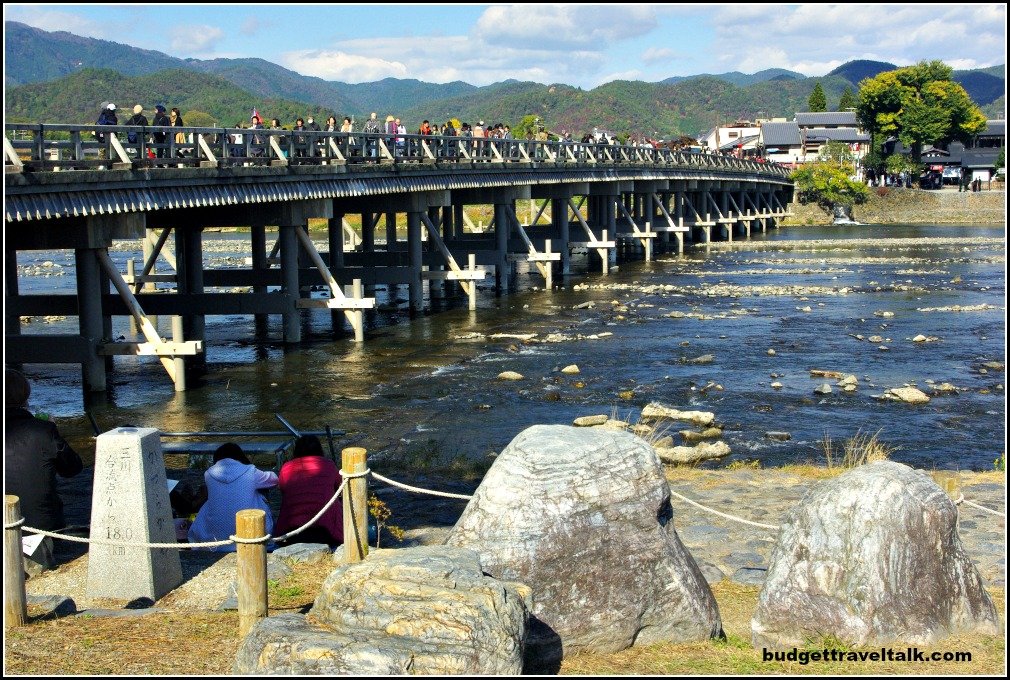 Originally the timber that built Kyoto’s temples was floated down this river and during the Edo Period it was used for several hundred years to transport grain and general cargo.  With the advent of trains and trucks the river trade ceased but the river has since made a touristic comeback. 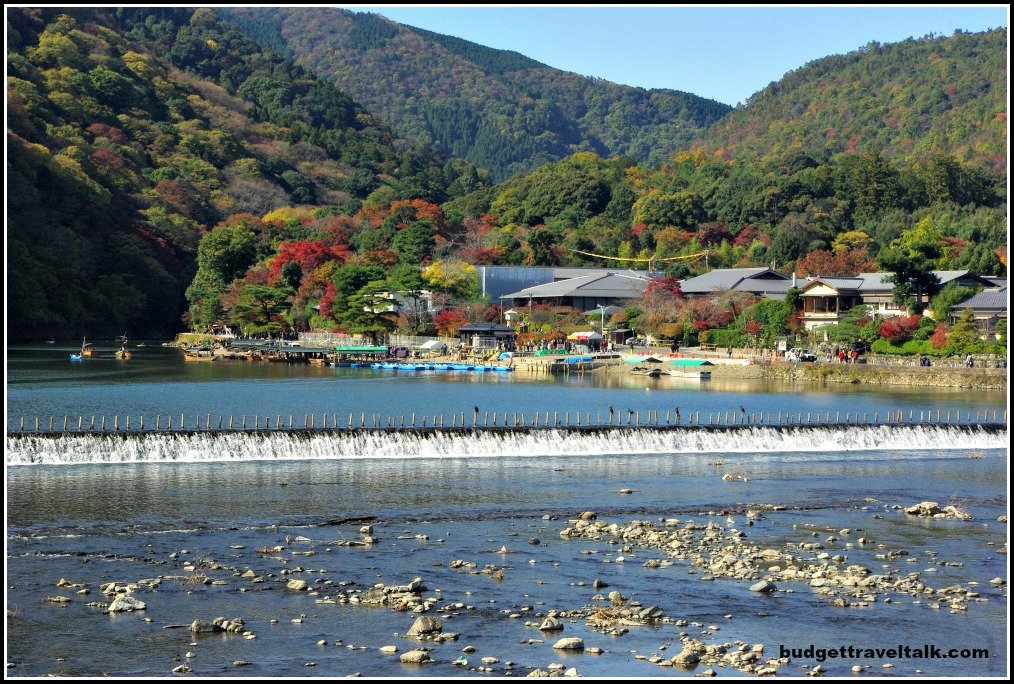 Starting out in the town of Kameoko the Hozu winds through the Arashiyama Ravine before shallowing out near theTogetsukyo bridge.  Therafter it becomes known as the Katsura River. 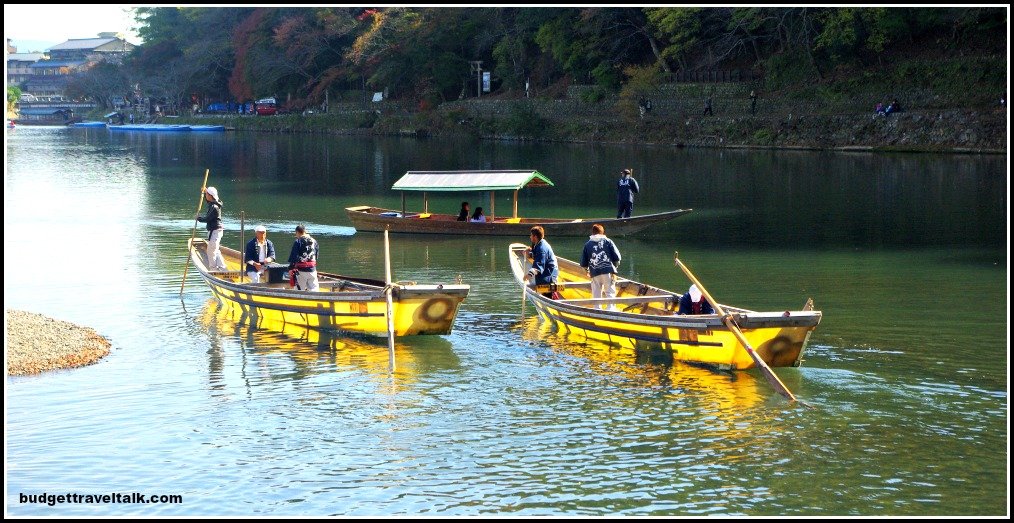 The yellow boats were built of fibreglass made eye catchingly bright as the sun shone through. 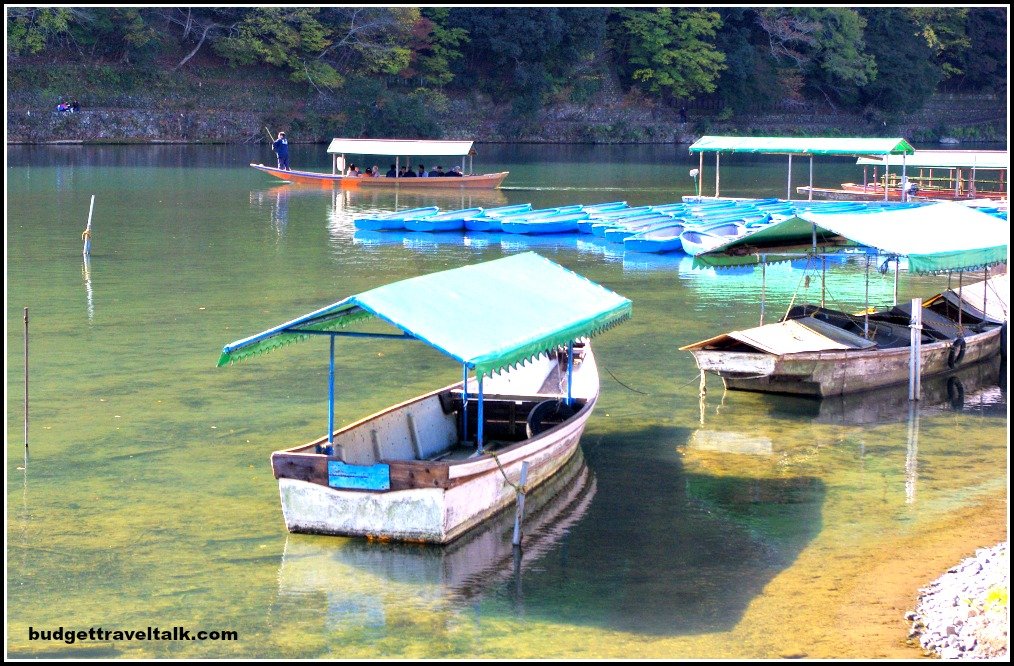 A little upstream on the northern side of the river rowboats carrying up to three people can be hired. 1400 yen/hour. 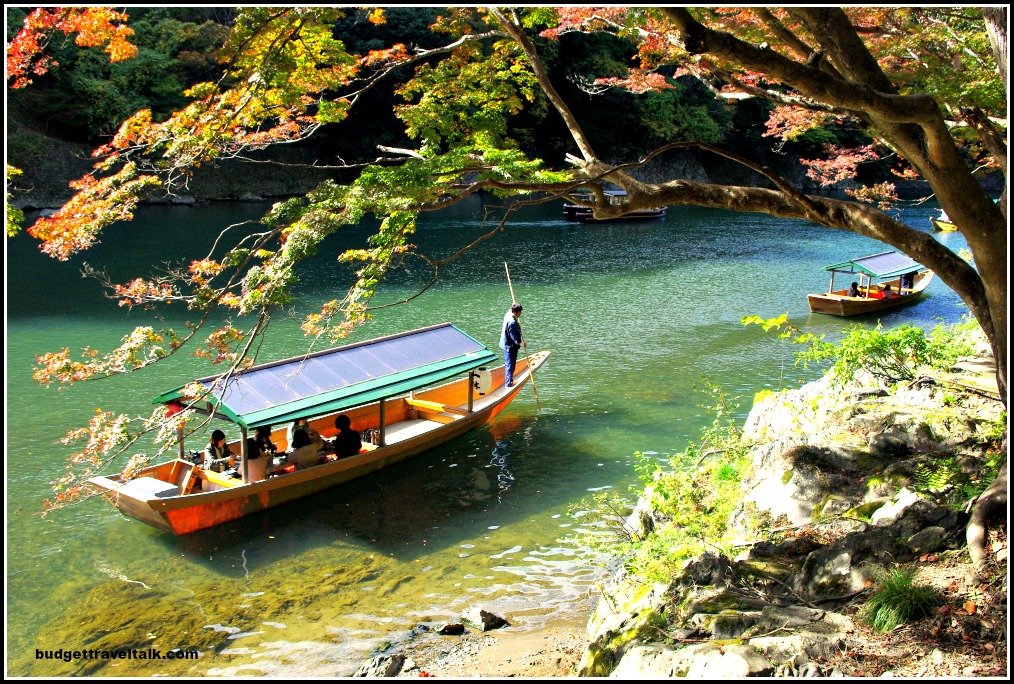 While the smaller were rowed, these larger boats were poled along from the bow.  Some, selling food and drink, pulled alongside the tourist boats while in others the passengers had brought along their own elaborate picnics.  As far as I could tell these boats just poled gently around in the immediate vicinity.

Meanwhile there are two hour white water rafting trips from Kameoko to Arashiyama in traditional flat bottomed boats. The trip is quite safe and does not depart if the river has more than the normal amount of water in it. 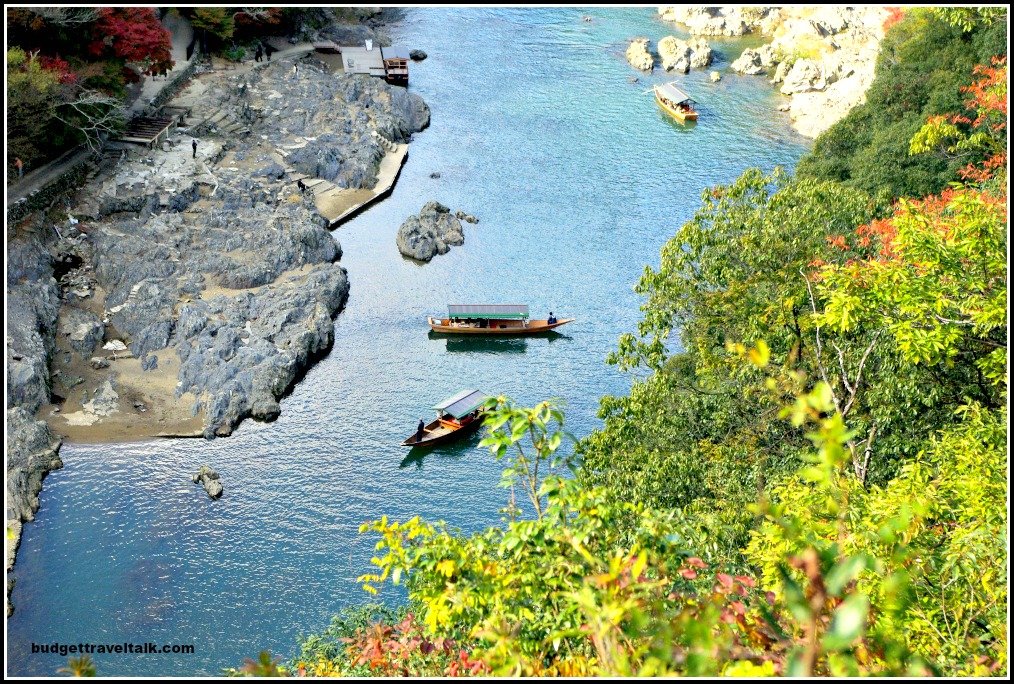 After crossing the bridge we turned upstream and followed the river until a locked gate barred our way.  Luckily there was an uphill track nearby which eventually led to a viewpoint in Kameyama Park overlooking the ravine.  It was only the beginning of Koyo but the pinks, reds, yellows and greens of the hills and the blue of the ravine painted an impressive picture. 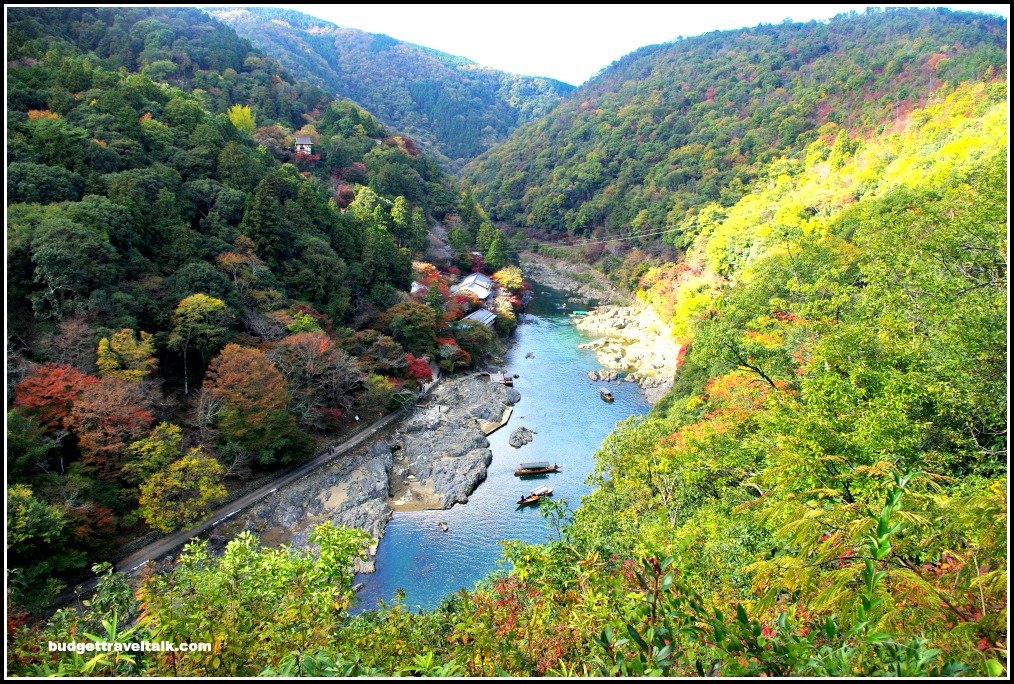 Arashiyama’s Koyo season (the second half of November and early December) is the favourite for the 2 hour Hozugawa River Trip.

The Sagano Scenic Railway follows the river from Arashiyama to Kameoko using traditional restored carriages fitted with timber seats.  The 7 klm 25 minute trip is an autumn favourite and doesn’t operate at all in January and February.

For a Frenzy of Autumn Colours it is possible to do the boat trip one way and the train trip the other.

How to get there.

On the northern side of the river is the terminus (tourist information) for the atmospheric Randen Line which we had used previously to access Ninna-ji and Kinkaku-ji.

We used the Hankyu Line whose terminal is on the southern of the river.

I have linked to Nancie’s Travel Photo Thursday at Budget Travelers Sandbox.

About Townsville
Next Post: Deer and Daibutsu self guided Nara Walk