We had driven all day to arrive in Dogubayazit, a far-flung outpost in Eastern Turkey, lured by the Ishak Pasha Palace which Lonely Planet bestows with a One Thousand and One Night’s romanticism. 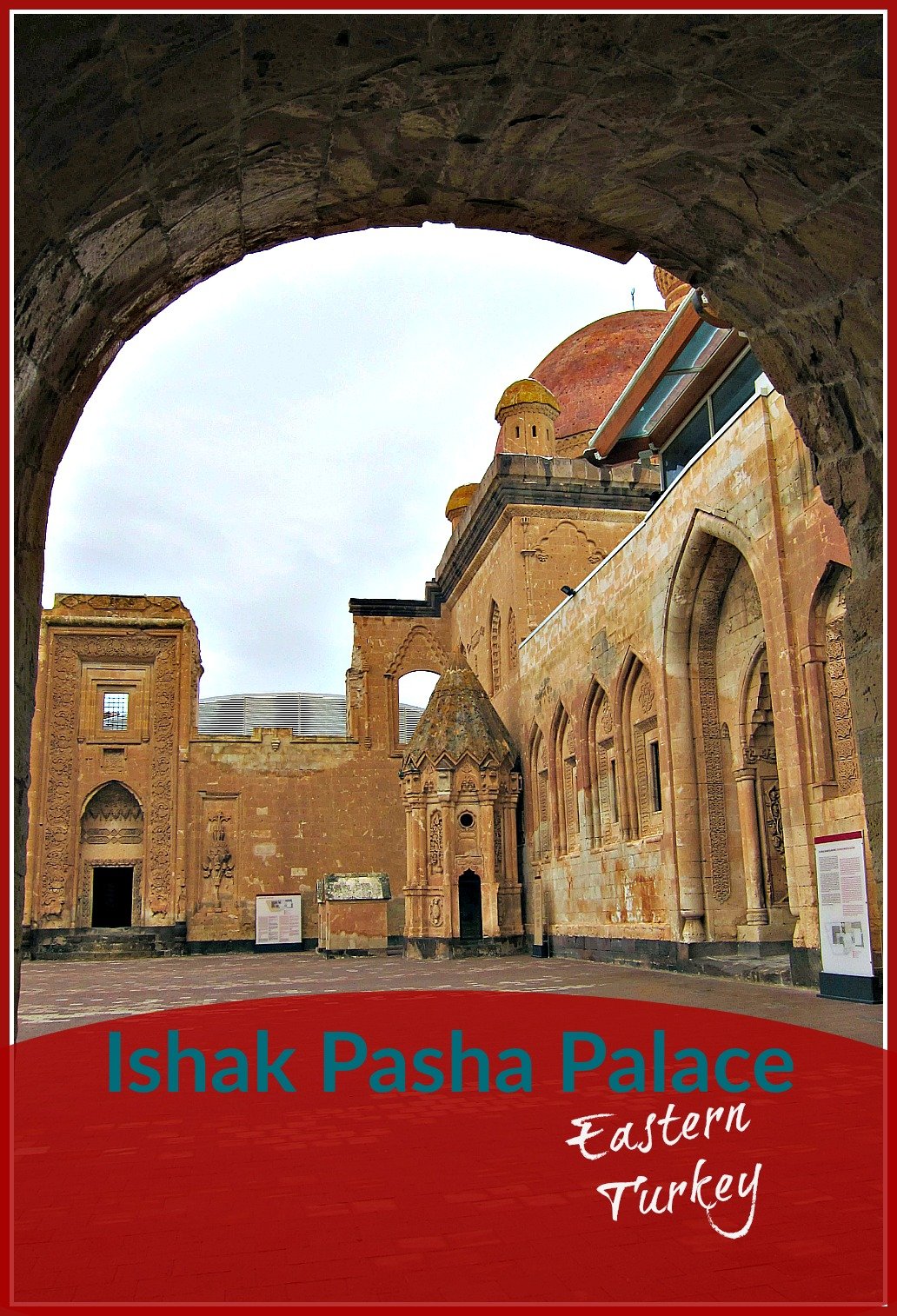 The first 70 km of the day’s journey from Tortum to Erzurum was on the excellent Erzurum Artvin Yolu highway D950 that held little traffic and was bordered by snow covered mountains. To my now shame, we did not visit Erzurum.  All I can say in our defence is we underestimated the time spent exploring the Kackar Mountains to the north and paid the price on this leg.  We refueled on the outskirts of Erzurum before joining the D100 another fantastic road heading the final 280 km east.  Along the way we had views of vast brown grasslands (darker brown where ploughed) and always a captivating backdrop of snowy mountains.

Sitting at 1625 metres itself, it is surrounded by five of Turkey’s highest mountains, the most well known being Ararat (5137 m) which lies only 15 km to the south-west.

The busiest Turkish border crossing with Iran is a tantalizing 35 km away.

The building of the palace was a family affair, started in 1685 by Colak Pasha (or Pasa), taking on it’s final form in 1784 under Ishak Pasha, with Mehmet Pasha adding final touches.  Ottoman in design, it is said to be a hybrid of Ottoman, Persian, Armenian, Georgian and Seljuk architectural styles!

We arrived into the chaos of afternoon peak hour  – when else?  Settled in a basic room of the very unremarkable (except for the views) budget hotel we walked up several flights of stairs to reach the lounge/dining room.

The continuous windows on three sides provided a visual feast, but my eyes were drawn to a sunny patch on the hills in front.  In particular to a small but beautiful building hovering in the light… could it be?

A Dutch couple, recuperating on the couch (from Dogu Belly), confirmed it was indeed the Ishak Pasha Palace. Sometimes I feel I have a guiding star. It was a pity that my star didn’t prevent me from getting the same ailment as the Dutch couple in the days to come.

Q. Can you see the palace?

Hint. It is mid-mountain and right of middle, above the final red roof.

The next morning we hurried upstairs looking forward to breakfast followed by a much anticipated Palace visit, only to find the scene dramatically changed.

The palace rested in a blanket of snow.

Our hotel manager assured us there wouldn’t be a problem reaching the site, but we wasted no time in case it started snowing again.

Ismail Besikci Caddesi, the main restaurant street, leads directly from the Town Centre, 6 km to the palace.  On arrival we were pleasantly surprised to find only one other vehicle in the Carpark.  From above it was easy to see the controversial shelters erected to protect the buildings.

The debate over spoiling the romanticism or preserving for the future, rages on.  In either case there has also been major reconstruction work carried out. 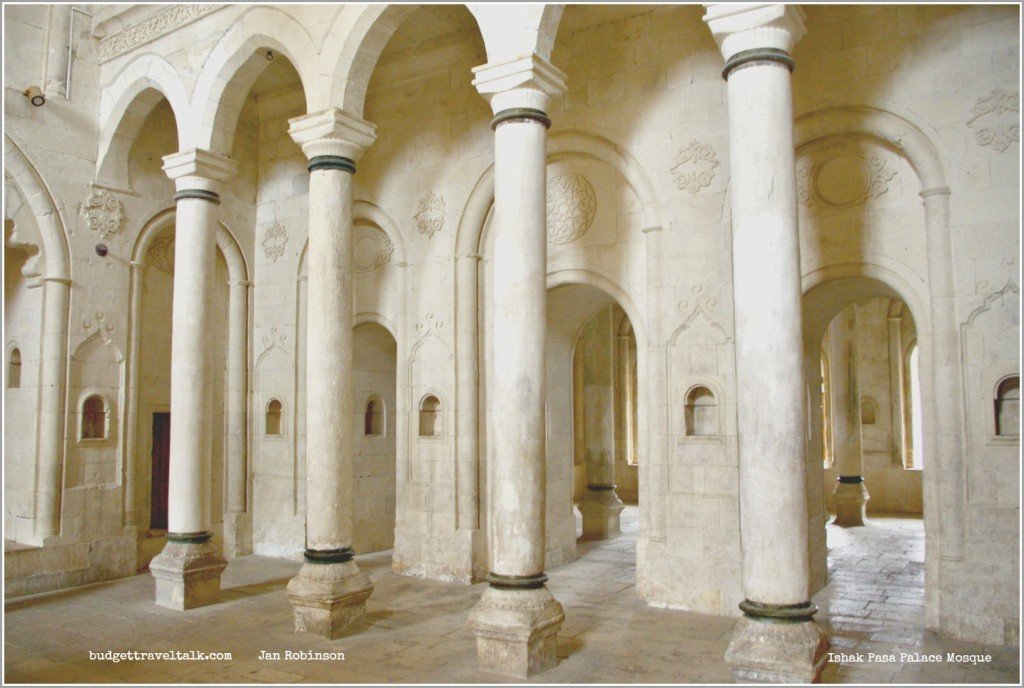 Goosebumps washed over me when I stepped onto the terrace.  The glitz and glamour of European Palaces is not something I would personally desire, but to have a Turkish Palace Terrace like this to call my own would be a dream come true. Standing on the edge of the terrace is magnificent. The sheer drop off, the views to the mountains and down into the valley – a terrace made for a ruler. I retreated to safety to take this photo.

The green tinge to the hills is from the mineral Malachite.

Every Palace needs a Dungeon.

21 steps beneath the guards room are six cells.  During restoration it was noted that one of the cells had no entrance.  However, the diary of Jaubert a secret officer of Napoleon who was jailed in the dungeons in 1805 explains that prisoners were lowered by rope through a hole in the roof. 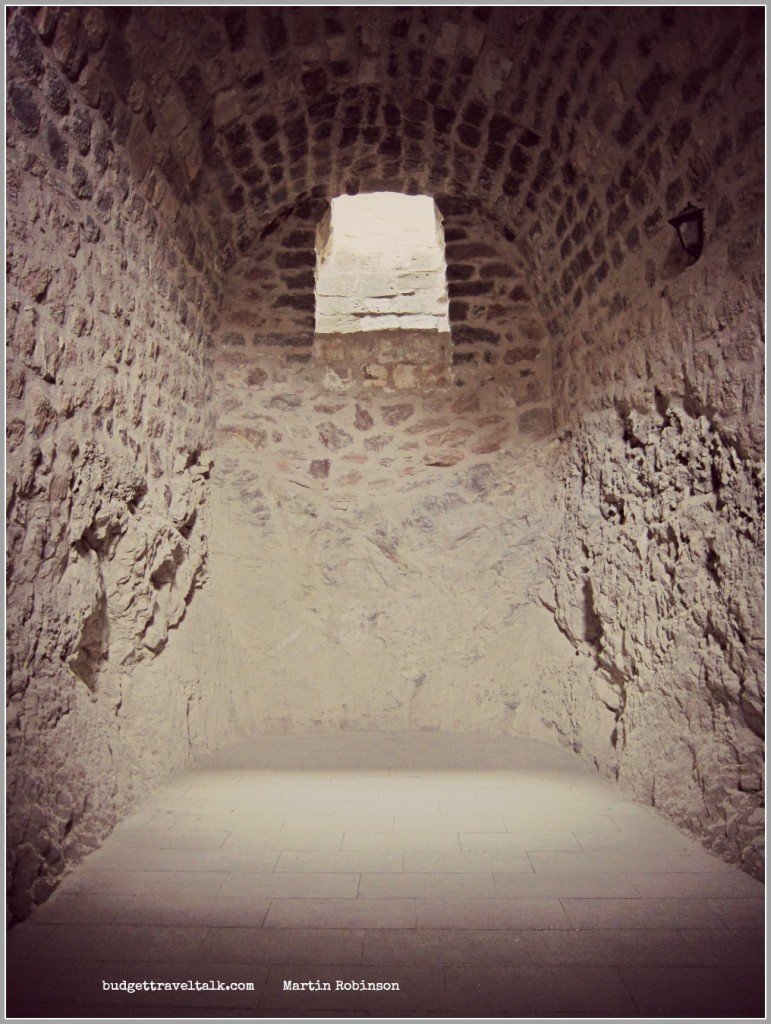 Tomb of a Turkish Poet.

Behind and to the right of the Palace is the tomb of the Turkish poet Ahmedi Hani, who put the legendary Kurdish love story of Mem and Zin into written word in 1695.  This area has a strong proud Kurdish heritage and the tomb is classified as a sacred monument.  If you are lucky enough to find it open, appropriate dress is required and shoes should be removed before entering.

A Mosque for the People.

Standing at the entrance to the Palace and looking to the hills behind you can see a mosque built by Silim I The Grim.

We climbed the impressive walkway to the mosque to peek through the windows and then loitered on the terrace enjoying the view of the palace from a different perspective.  This mosque is a people’s mosque.

The mosque within the palace was for palace use only.

A ruined fortress built by the Urartians (Urartia predated Armenian) clings to the rock above the mosque.  Unfortunately the tomb and mosque were closed and as far as we could tell the fortress does not open to the public.

If you feel adventurous it is possible to climb the hills to the upper section for the fabulous views but it is considered quite dangerous.  Eskibayazit (old Bayazit) was destroyed by the Turkish Army in 1930. 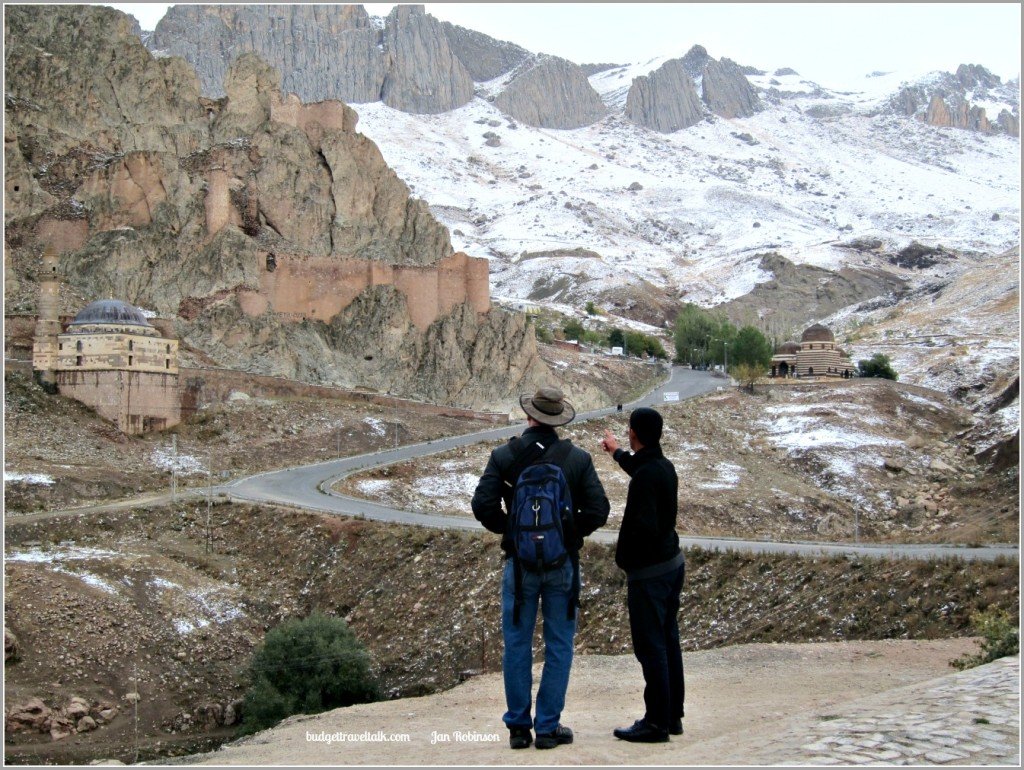 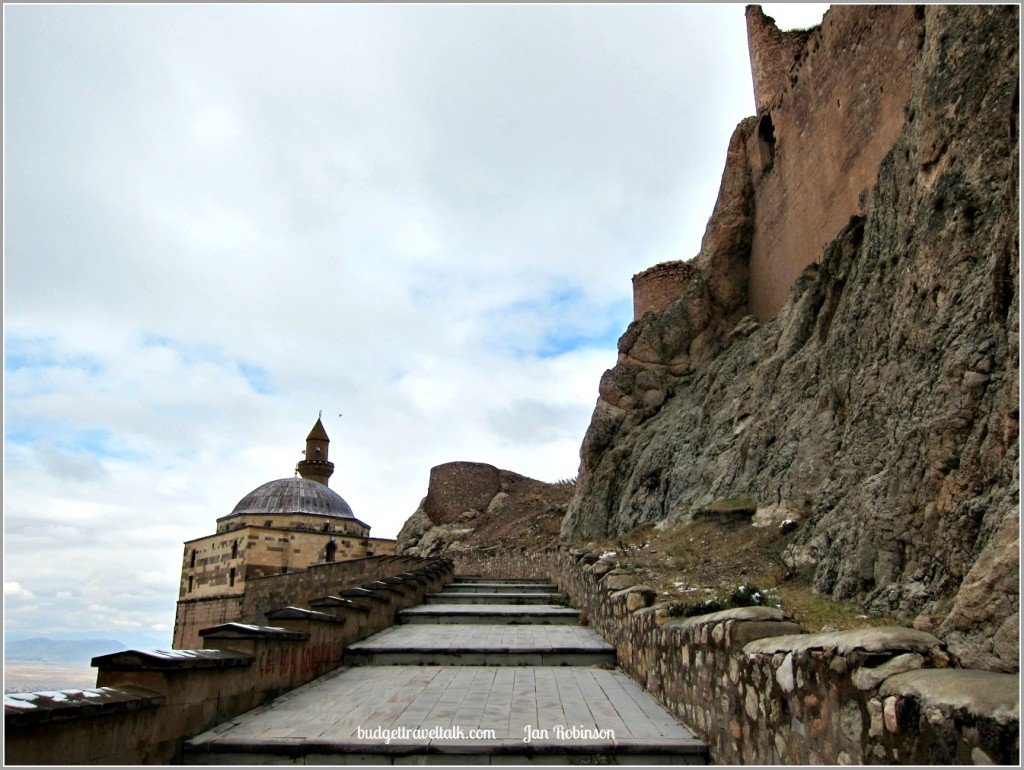 Climbing to the Peoples Mosque. 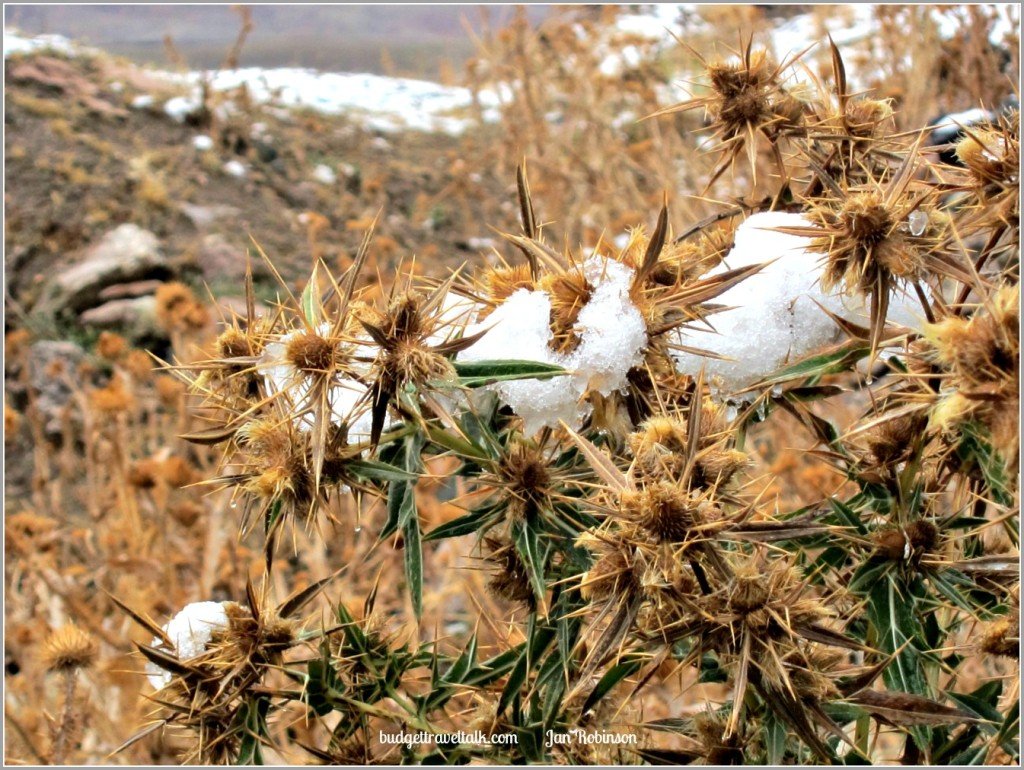 Covers or No Covers?

It is true that the protective covers spoil the romantic feel of the place, but they do ensure a visit during any type of weather, and hopefully will slow deterioration from the elements.

From below the Palace has an exotic stage presence, while from above I felt humbled by the grandeur of the scene – the mountains at our back, the palace before us and Dogubayazit (new Bayazit) huddled on the plain below.

The mineral greens and pinks of the bald hills that unfold into the distance do have a definite biblical air about them although the nearby much visited Noah’s Ark site is of questionable authenticity.

Mini Buses leave from the main street but only when full – 2tl each.

A return taxi that waits one hour should cost around 30tl.

The speed limit on the highway is 90 kph

Tuesday in Townsville Experience Pineapples and Swimming at Rollingstone Creek
Next Post: Fantastic Friday and Cambodian Fish Fillets drying in the Sun