On arrival in Kampot, CAMBODIA after a long, dusty and break-down riddled bus journey from Battambang, we rapidly started reappraising the length of our stay.  Our pre-arrival booking for two nights first extended by one day, and then another as we re-shuffled a schedule that was at best loosely shuffled to begin with.

Kampot days were hot and hectic.

A couple of days into our stay we decided to RENT BEAT-UP BICYCLES (the only type we saw) and explore further into the town.  We covered a lot of ground, collecting some gifts for friends and getting lost in the maze of the undercover market and with that success tucked under our belts we crossed the river heading for Nut Hill on Fish Isle.  Of course we had directions but no map and our idea of finding salt mines led us off the main dirt track which was in a poor state after the wet season anyway.  I always have such great memories of our rides – even if they don’t seem so great at the time!   As much as I enjoyed having wheels, I was more than willing to exchange them for a cold shower at the end of the day.  Hot Day + Bike Ride + Cold Shower = Bliss.

When I think of Kampot, the first image that springs to mind is of the river promenade known as The Front.  Paved in pink and lined with trees, I wondered if Kampot ever got crowded enough to warrant the space.  Maybe a case of good town planning?

I knew that at least some lucky workers had finished for the day when motorbikes started prowling.  Although there were not many travellers in town, those that were, resurfaced to swap stories over beers.  Happy hours were really big in Phnom Penh and the trend continued here in Kampot.  I would would order one beer first and have the other later.  However Marty (yes I have reverted to calling B.H. by his name) doesn’t drink alcohol so had to pay full price for his drinks. Crazy I know.  Sunset was also the time for a walk or jog along The Front.  While photographing the sunset, and I know you will, remember to look out for the swiftlets diving and fish jumping – both catching insects.

In case I haven’t painted a good enough picture, I have some photographs for you as well. 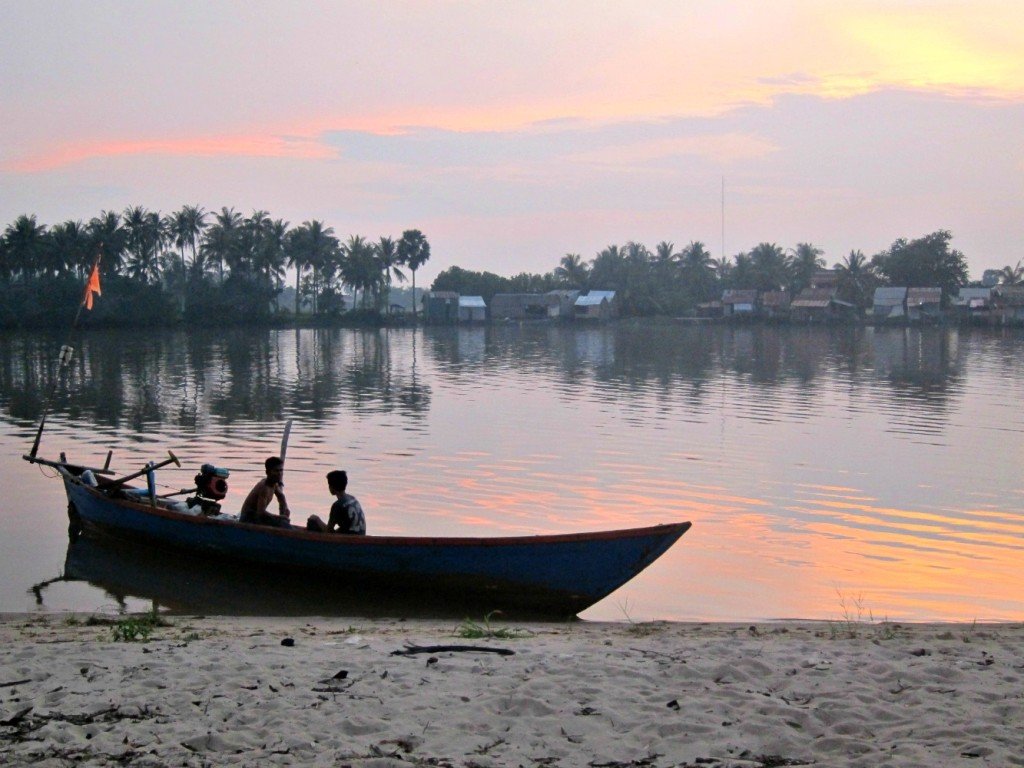 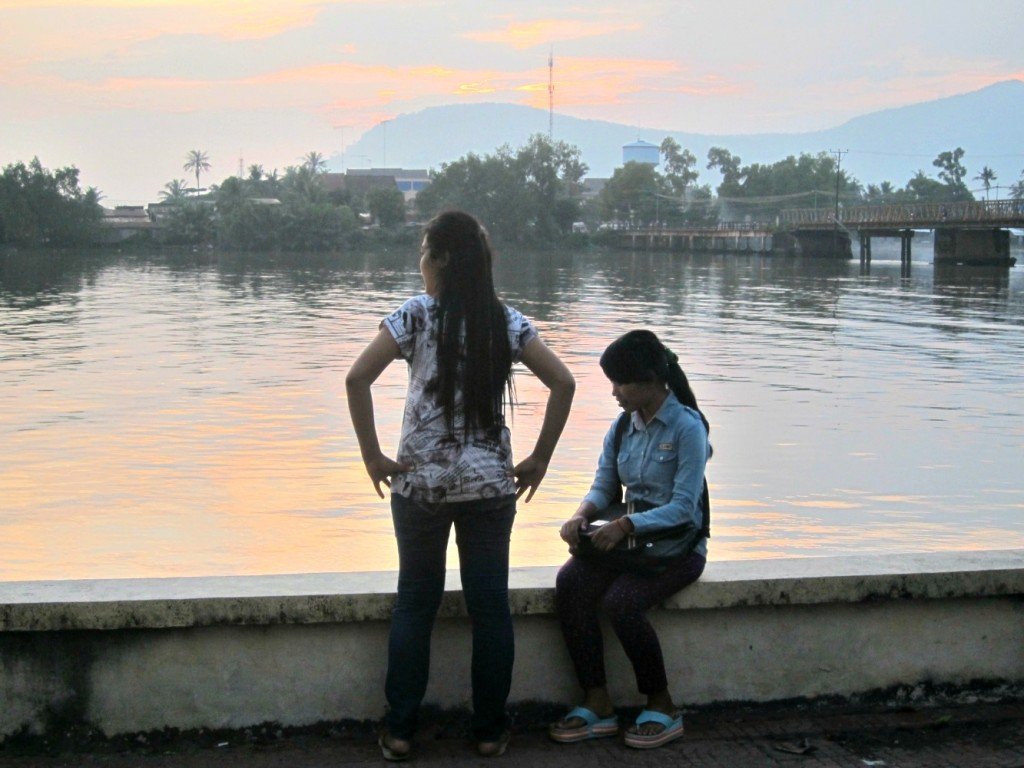 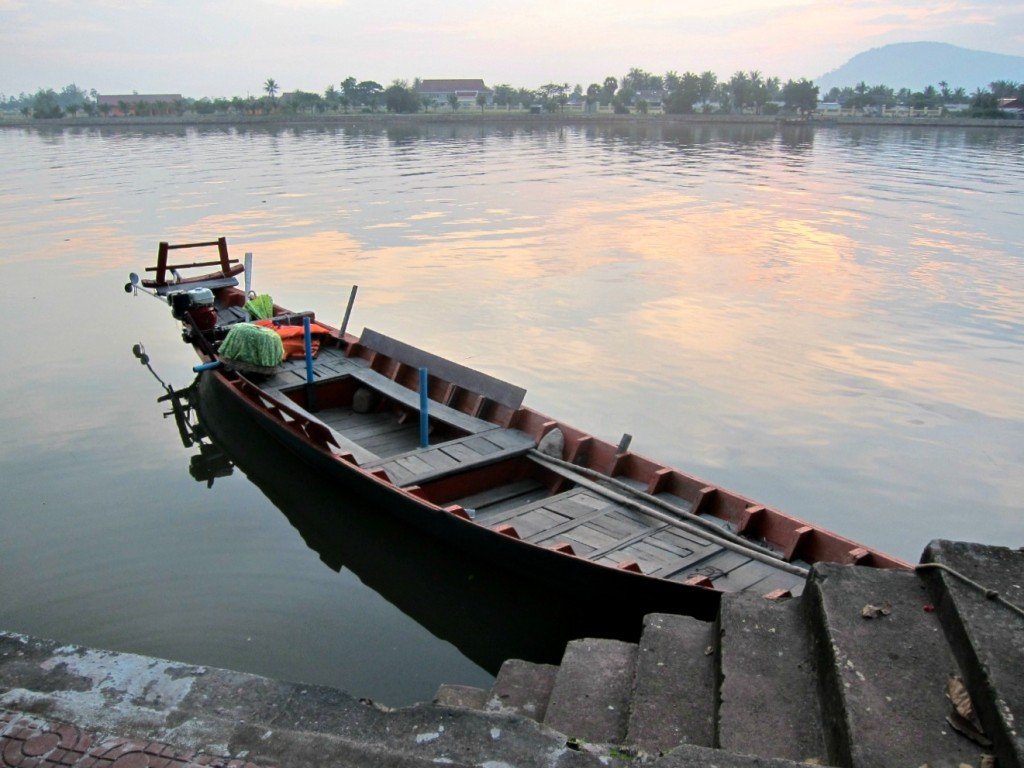 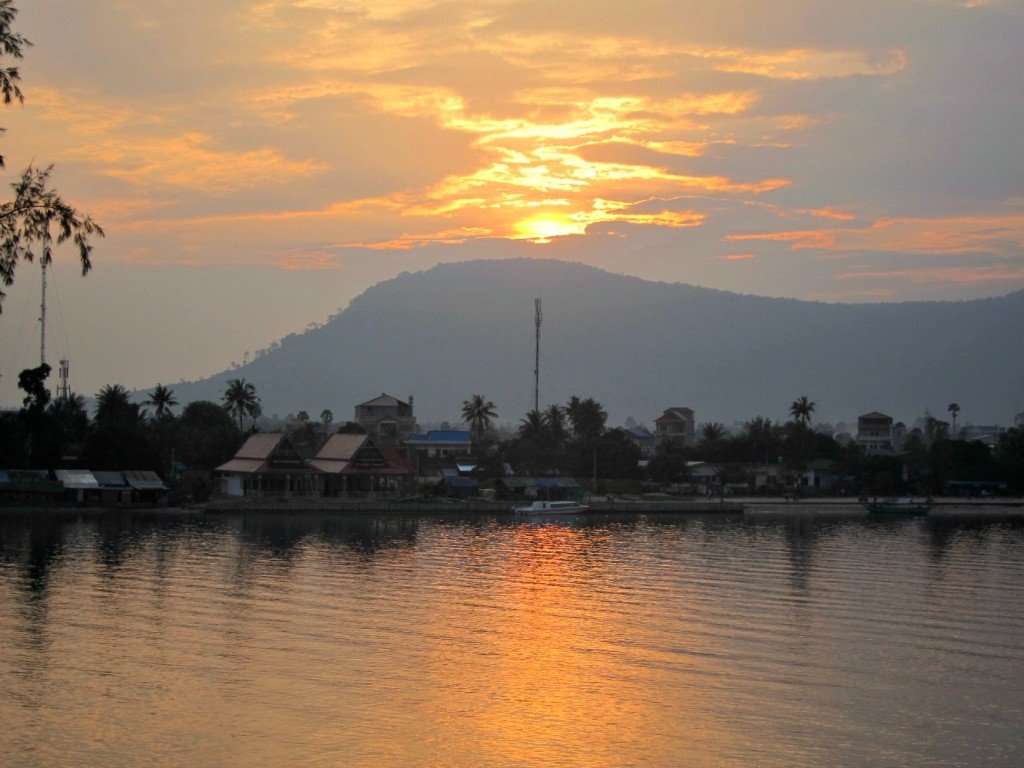 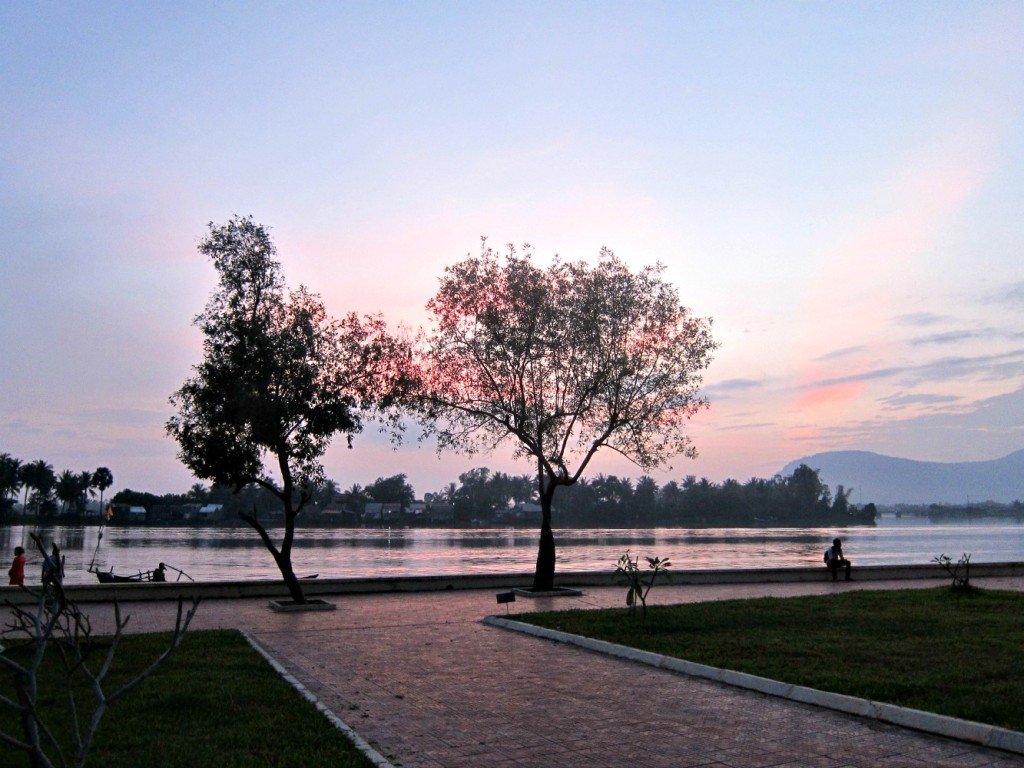 What a peaceful place.

Although the Western Side of the river had some new bars and backpacker hostels, The Front was still the place to be when we were in Kampot in November 2013.

For the Budget Minded

Most happy hours in Kampot use Cambodia beer (I had not noticed this beer until Kampot).  Happy Hour beers were .75USD per glass whereas in Phnom Penh they were .50USD (unknown brand).  I kind of liked the idea of drinking Cambodia beer.

Beat-up bikes cost $1 USD per day and come with bike lock.  You have to pay for the bike if you lose it and I bet they are not cheap so lock it up.  Same goes for motorbikes.

We stayed at the Kampot Riverside Hotel.  It was super clean, came with a huge bacon and eggs and fruit breakfast, and had a great river view.  Our Standard Plus room cost $34USD/night.