We had walked amongst and stood in awe of the inspiring ruins of Ani the once Armenian City (45 km east), but it would have been so good to spend another couple of days in Kars.  The dark and menacing castle was beckoning, but we chose instead to spend our last remaining hours there walking the streets, absorbing the once grand buildings and enjoying the vibrant feel of the town.  I guess it shows that of the towns we visited on our Eastern Turkey Road Trip, Kars was my favourite.  I would also have liked to have visited Van, but it was too far away for us on this particular trip.

As we left Kars on 10th October, 2013, we slowed to accommodate the geese that wandered the outskirts – there was a story behind those gaggles.  Nuran Ozyilmaz a local woman has broken the shackles and opened Kaz Evi (Goose Restaurant) selling – you guessed it – Roast Goose.  Although women in the area have long raised geese to feed their families through the winter, a woman opening a restaurant was unheard of before Nuran.  Her trail blazing has opened the door for other women who have traditionally lacked opportunities. 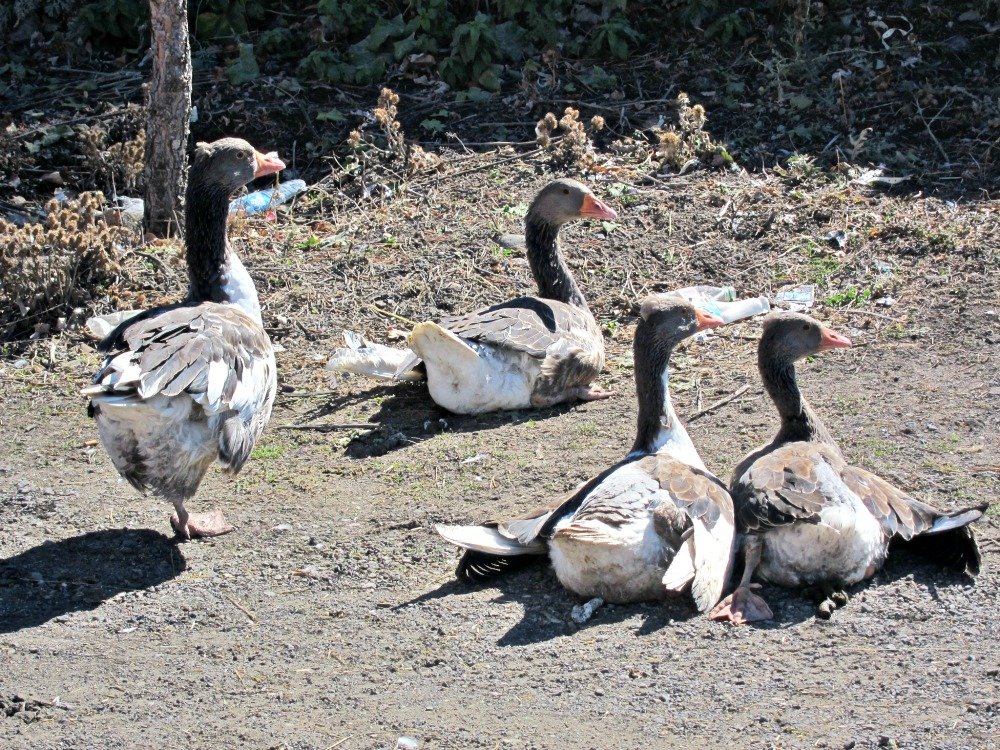 It wasn’t long before we had another animal encounter.  These horses would be hard to spot at night on the dark roads, not to mention that trench in the centre of the road.

Trucks often carried huge loads.  In one week’s driving we saw three single vehicle truck accidents, two of the trucks carrying no loads at all, the third being a fuel tanker.  This load looked like it had been expertly packed, or so I told myself. 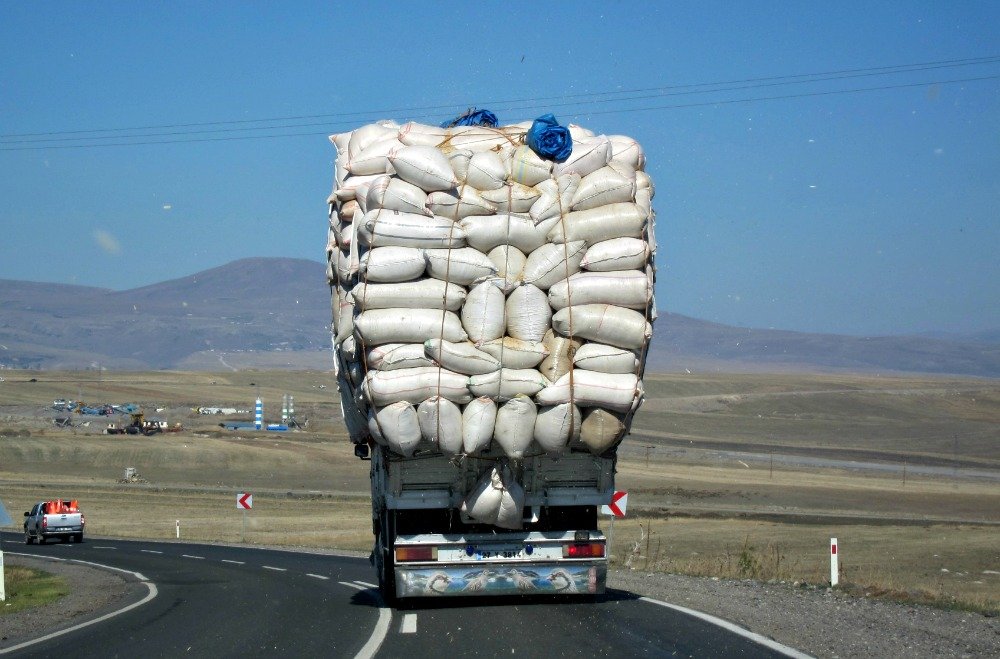 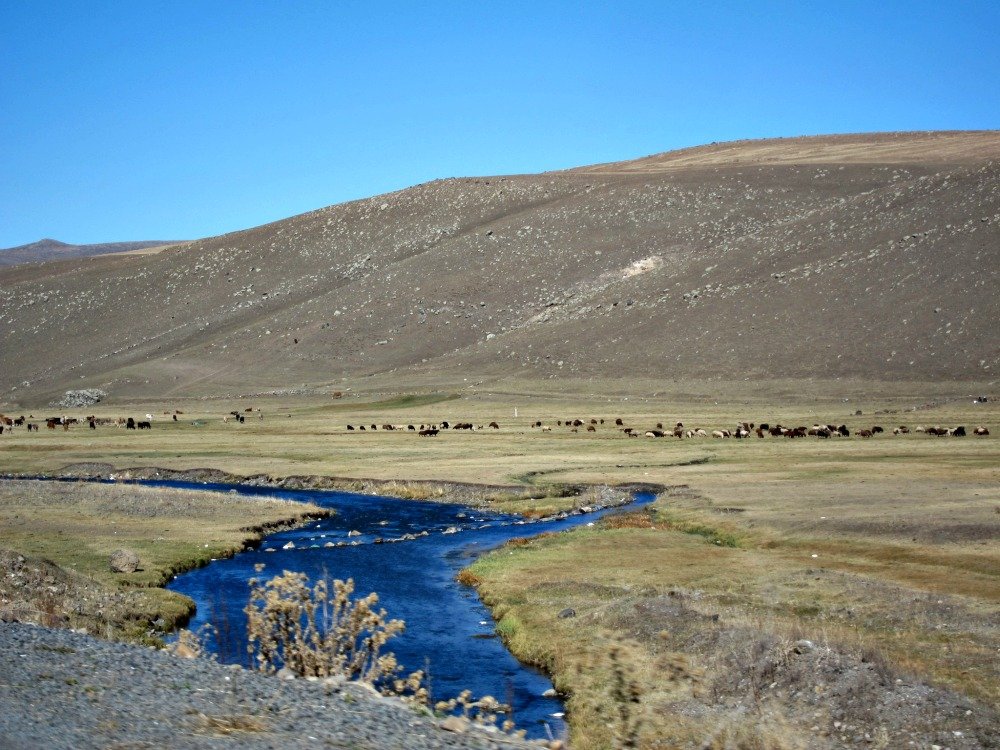 In Ardahan we parked in the first available spot and stretched our legs while collecting a few items for an impromptu picnic.  Jumping back into the car we rounded a corner, only to get caught in traffic chaos caused by road excavations.  When we eventually made our way through the town, we had to bypass a lovely area beside the river complete with picnic tables because of more roadworks.  They were the first picnic tables we had seen on the trip, so we weren’t hanging out for more.  Traffic was minimal so we just pulled over and sat beside the road.  You can see Ardahan in the background of this shot. 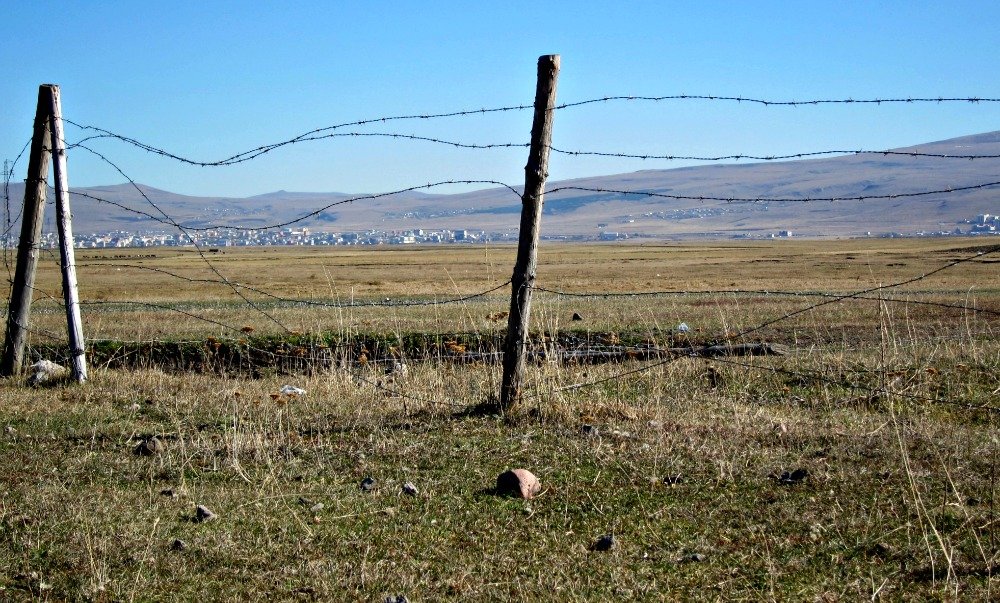 Our picnic only had three ingredients, but what ingredients they were.  The (gifted) tomato was bursting with flavour and the bread fresh from the bakery was crusty on the outside and soft and delicious on the inside.  We had to try a few places before we were able to buy a smallish slab of cheese.  It was delicately (mild) flavoured but complimented the tomato.  Turkish Tomatoes always stole the show! 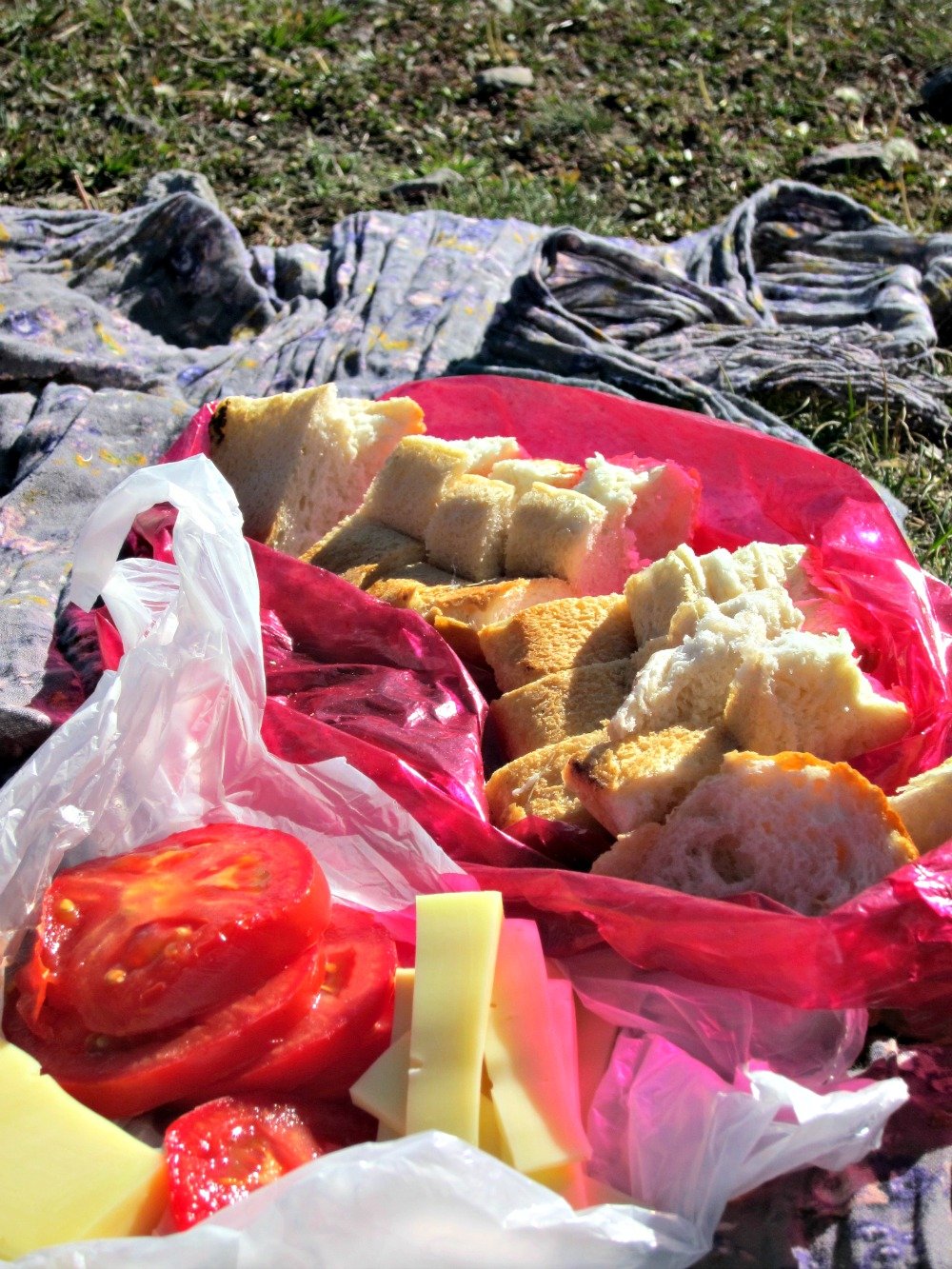 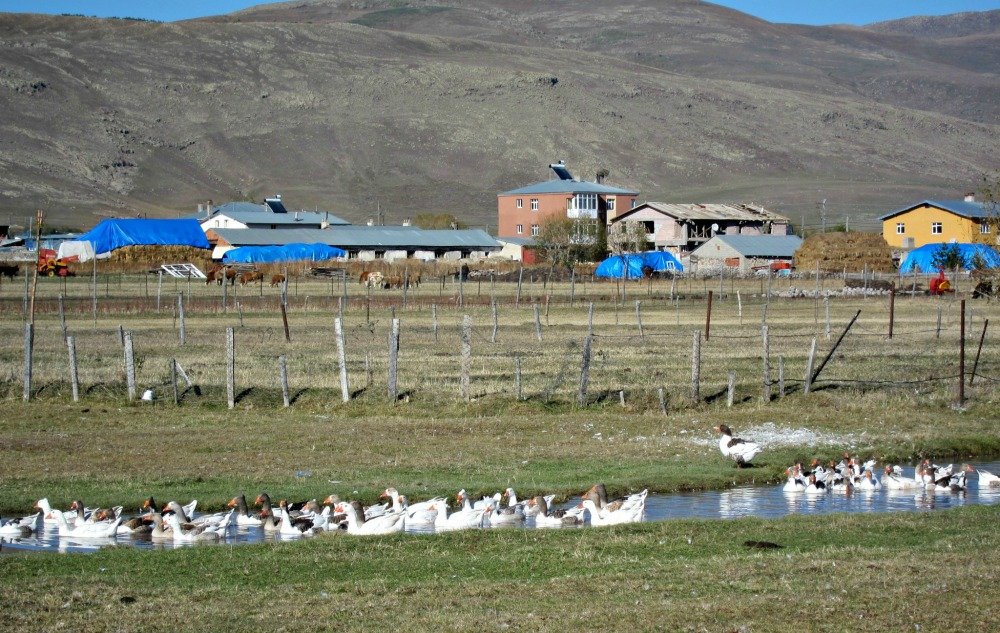 Looking back toward Ardahan as the road started climbing again.

A group of about twenty or more log cabins at the Yakari Kocabey Yayla near the highest mountain pass.  Yayla ( highland) can mean summer pasture for the animals, or a summer mountain resort. 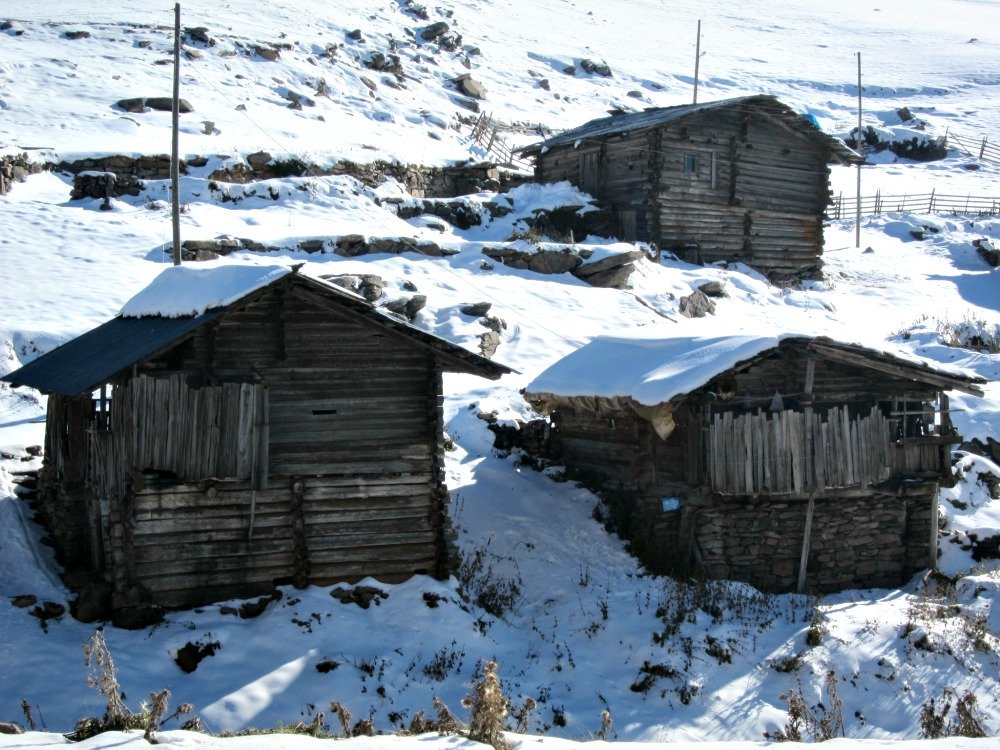 The Cam Pass (2640m).  Posts for measuring snow were common on the roads in Eastern Turkey. 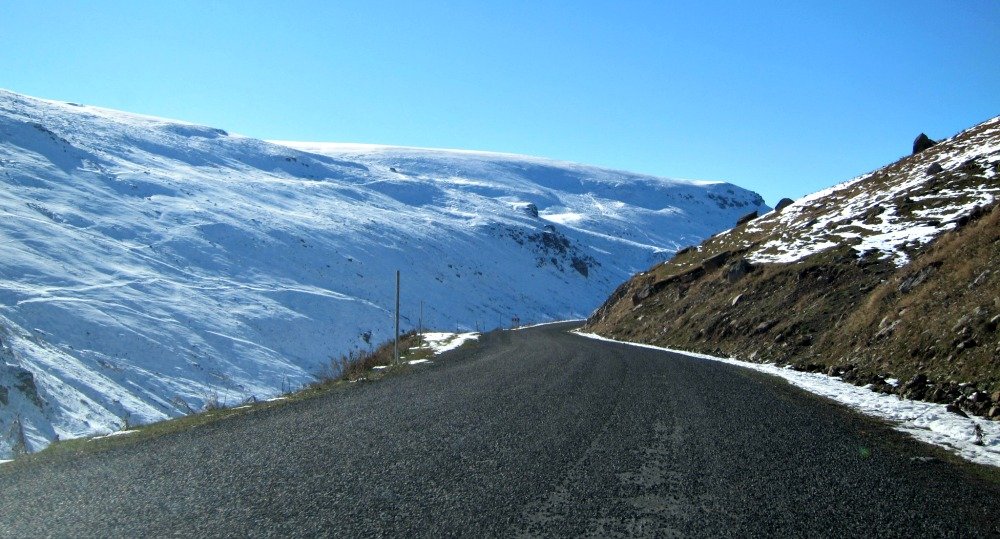 You knew there was going to be more animal photos! 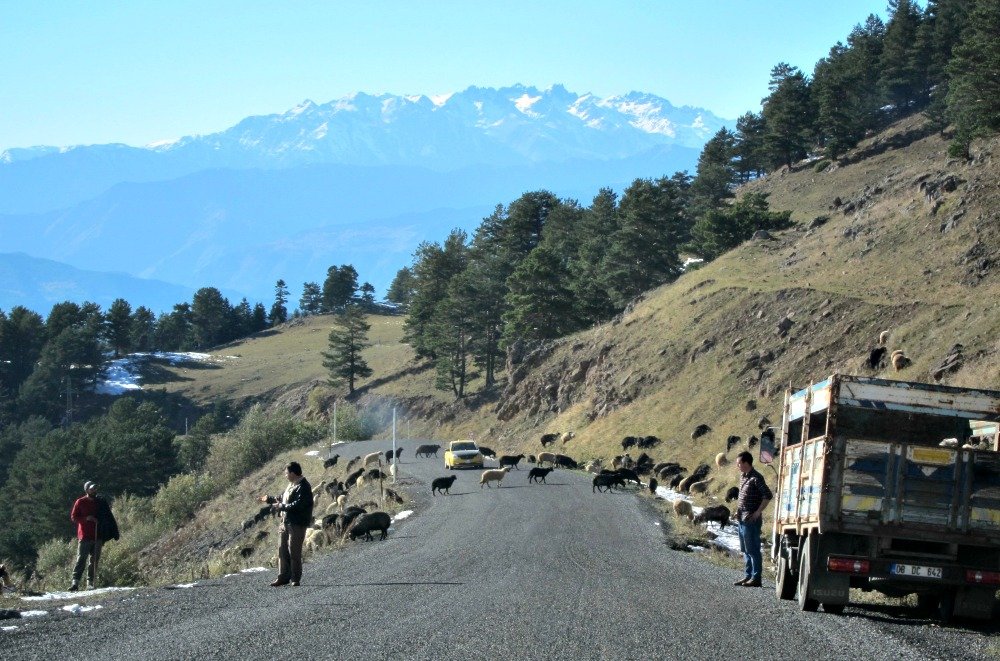 Coming down from the mountains was like discovering a lost Eden.  The Savsat Valley was a sight to behold.  We stopped and looked in amazement.  Were we really in Turkey?  The spectacular mountain scenery of Karagol Sahara National Park can be explored from Savsat.  Just ten minutes out of town on the road to Artvin, when you see Savsat Castle on the right, take the road to Velikoy. 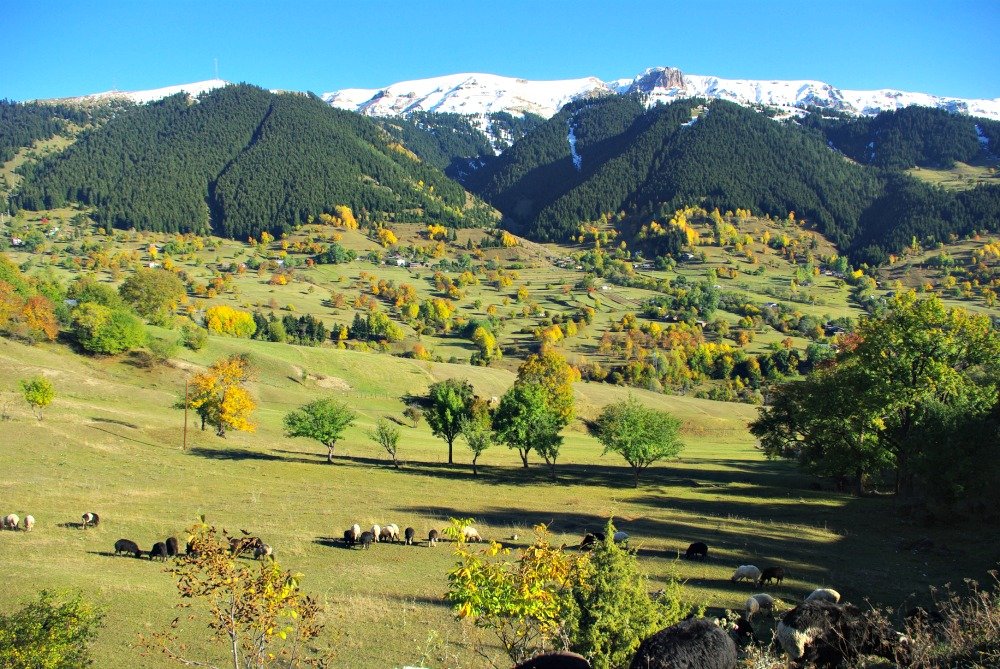 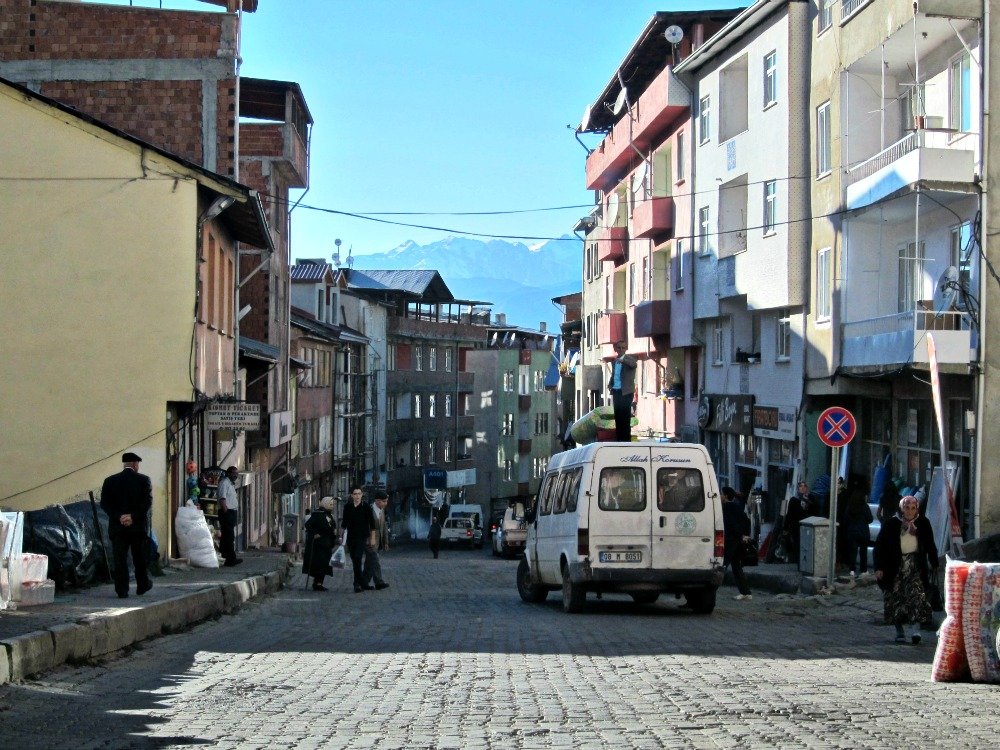 As we got closer to Artvin dam structures appeared. 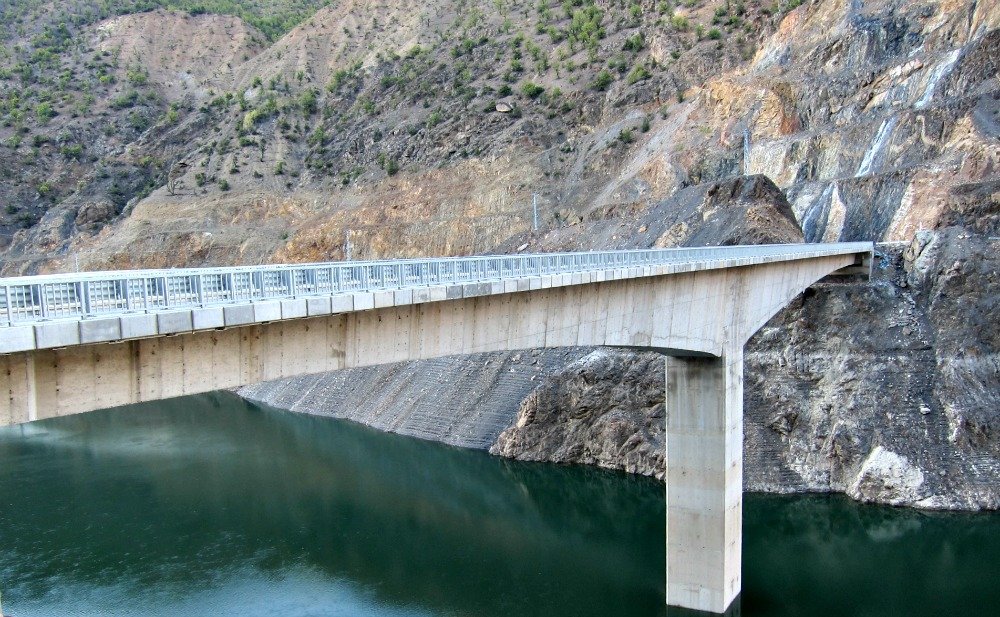 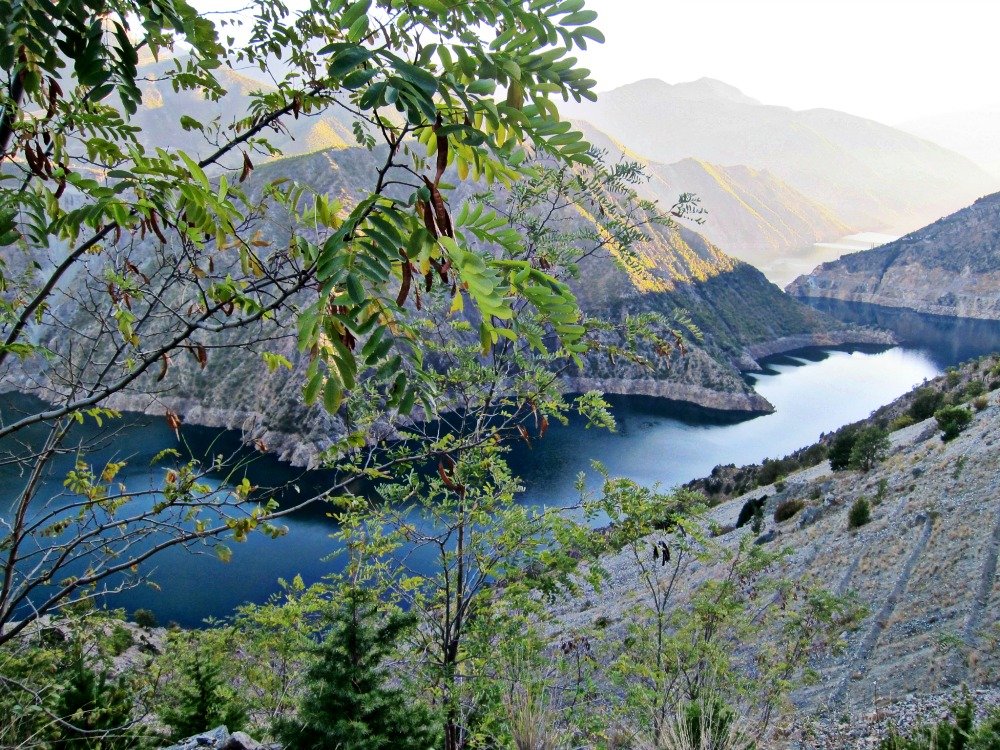 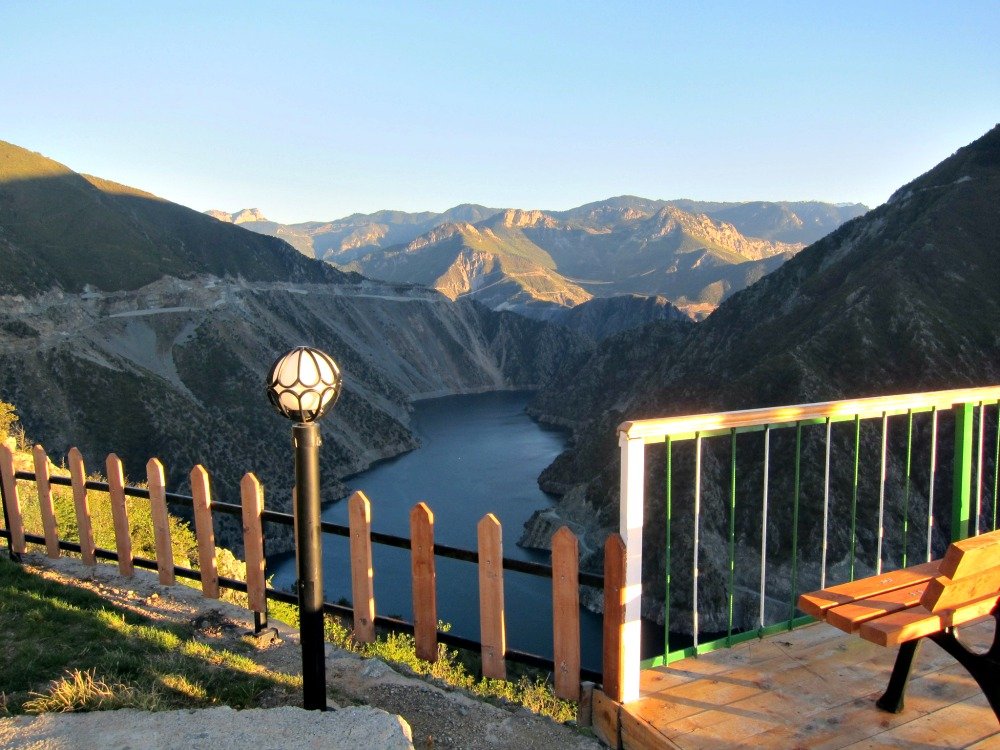 Deriner Dam.  In the distance Artvin clings to the mountain. 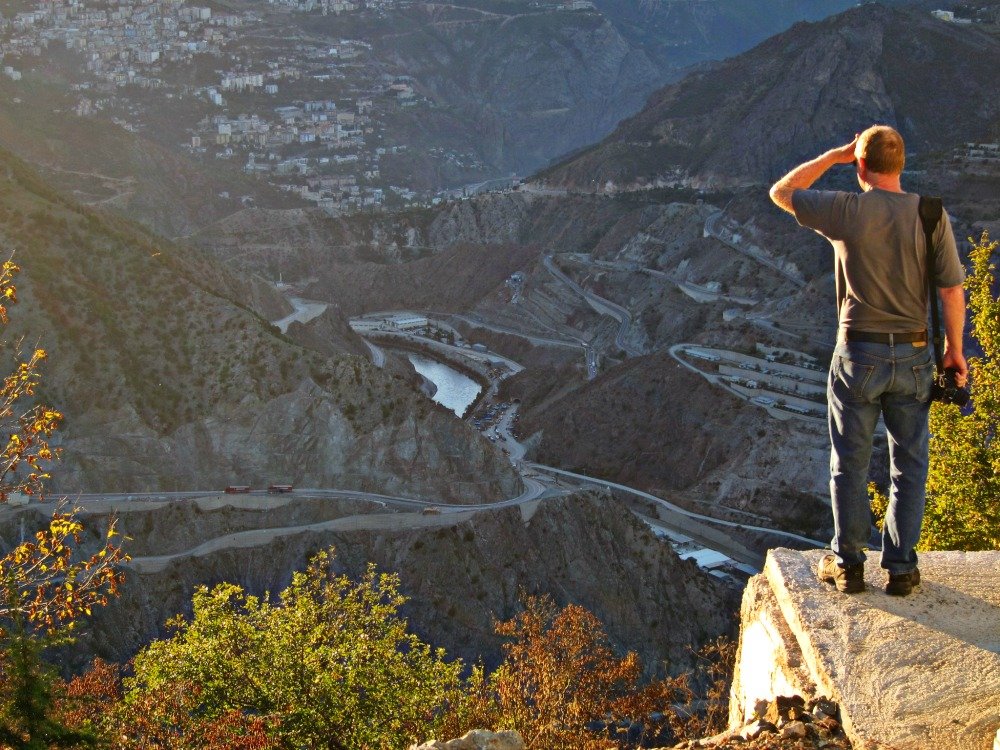 The switchbacks went on forever – we never found the end of them – instead we found a park outside the Midros Supermarket and continued on foot.  Finding the Karahan Hotel closed, some locals stepped in and directed us to the Mersivan Otel where we found a double room with breakfast for 80tl.   At breakfast we sat on the enclosed back verandah that teetered over the drop with the sun warming us and views up and down the mountain and across the valley.  Isn’t life wonderful? 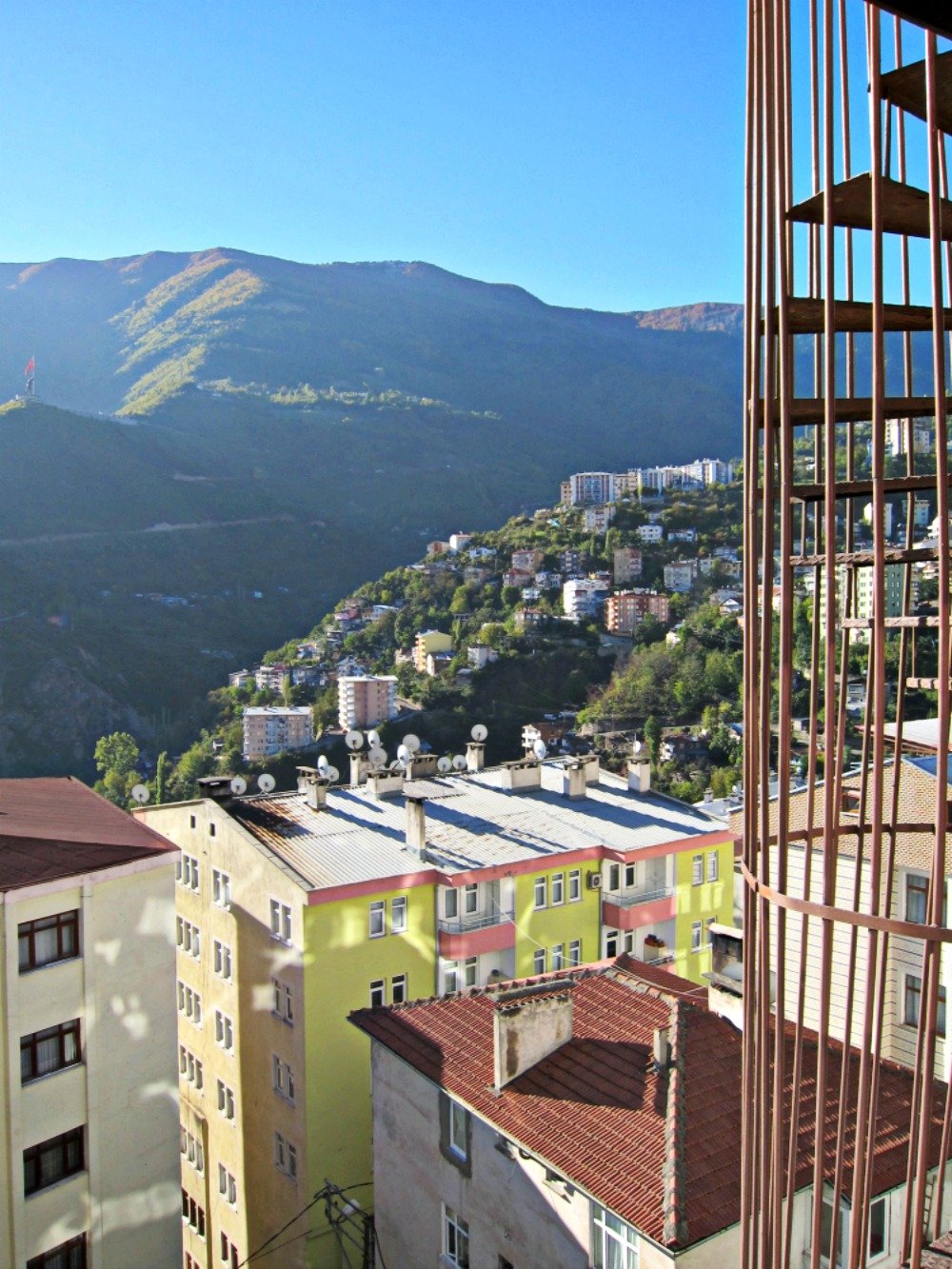 We are linked to Budget Travelers Sandbox for Travel Photo Thursday.

A Self Guided Walk at Riverway Townsville
Next Post: Townsville Strand Rotunda