While Lake Bled considers itself to be the jewell in the crown of Slovenian destinations, I think that Lake Bohinj, only twenty-eight kilometres to the west, is Slovenia’s hidden gem.

Even if you don’t recognise Lake Bled by name, I bet you would recognise it’s stunning Travel Poster photo.  Placid blue lake, wooded island with 17th Century Church overlooked by a crag top castle… sound familiar? It is a fairytale scene, but one that glosses over Bled’s glamorous and busy profusion of lakeside bars, restaurants and hotels.

It could have been the moody clouds or the hauntingly beautiful lake reflections, or the fact that in May Lake Bohinj was delightfully tranquil.  Whatever the reason, I think it is a hidden Slovenian gem, waiting in the shadows for it’s turn to shine.

The time to visit is now, before the Fairy Godmother appears, shakes her magic wand and whisks Bohinj off to join her sister at the ball.

Lake Bohinj, is a glacial lake tucked away in the N-W corner of Slovenia, in the Julian Alps area of Triglav National Park.  It is a well-known starting point for hikers and also attracts climbers, mountain bikers, kayakers, fly-fishermen, swimmers and snow skiers – in short it’s an outdoor enthusiast’s dream.  But don’t worry if this doesn’t sound like you, because it is also a wonderfully relaxing place to be.  Sketchers, artists, photographers, people who walk as opposed to hike, or float dreamily in a boat instead of pumping iron would love it here too! 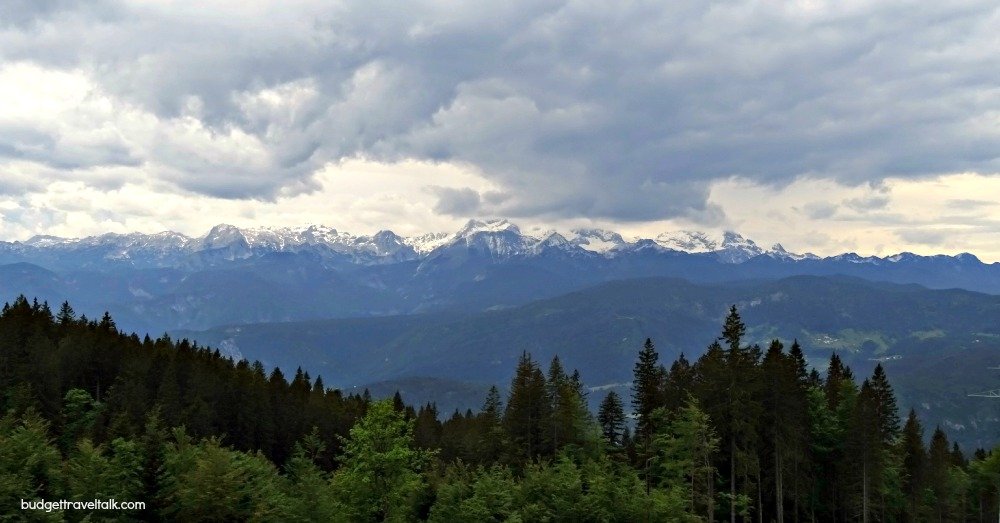 At Ribcev Laz, the village that marks the entrance to the 4.2km long lake is a statue of a Chamois or Goldhorn, the star of a famous Slovenian legend set on Mount Triglav. 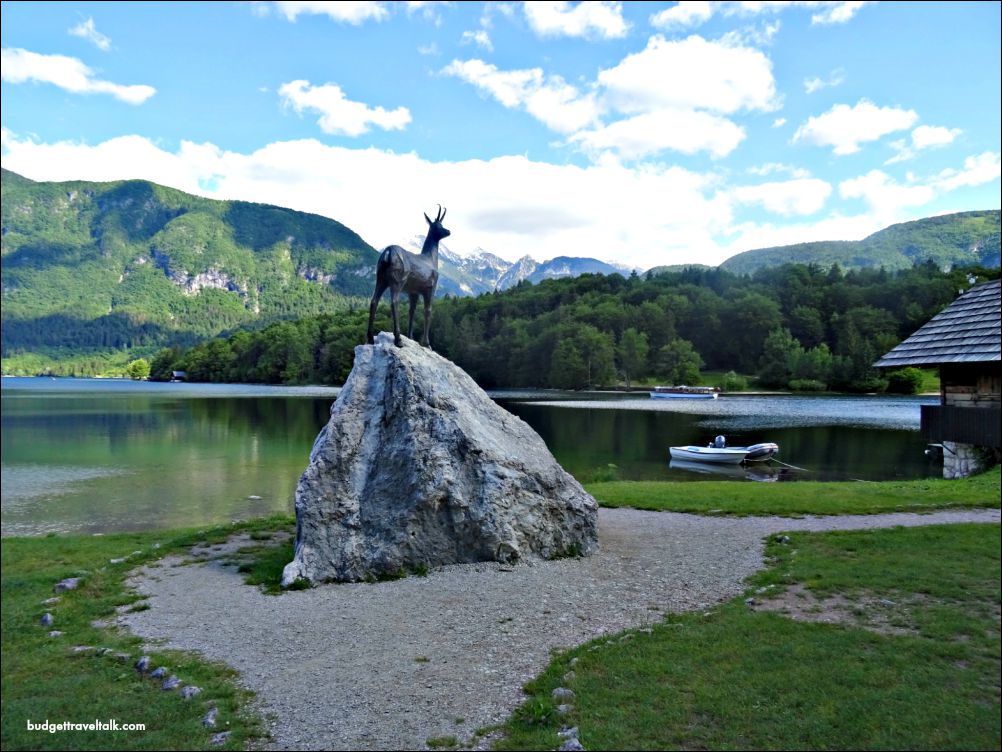 But before reaching the Lake and Chamois there is a group statue in a park on the right of the road, depicting four local men – the first to climb Mount Triglav in 1778. It was erected on the 200th anniversary in 1978 and shows the group pointing toward the 2864m high Mountain. 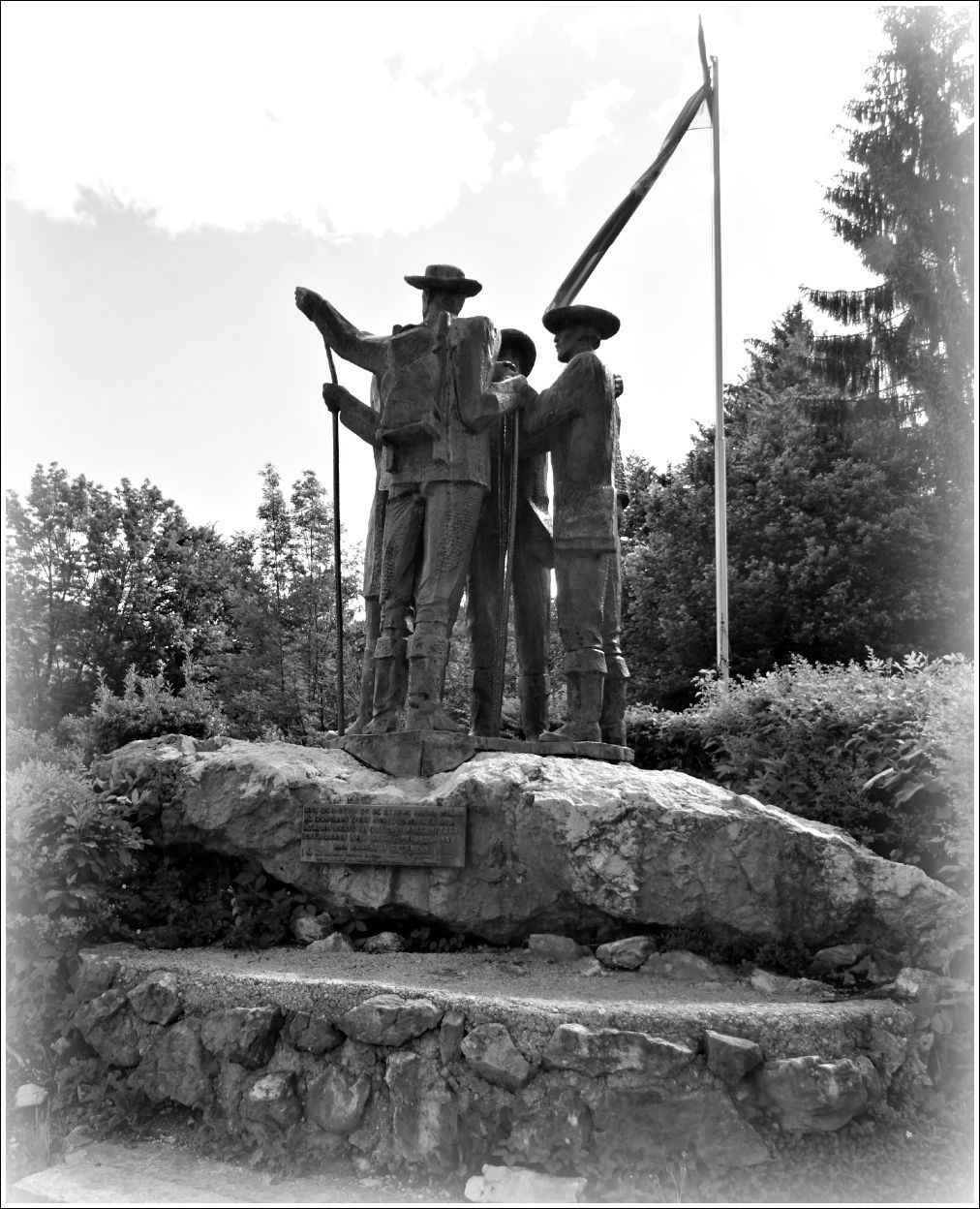 The Medieval Church of St. John the Baptist.

The lake, bridge and church with it’s frescoe filled interior, are a worthy trio for Bohinj’s own Pin Up Poster. 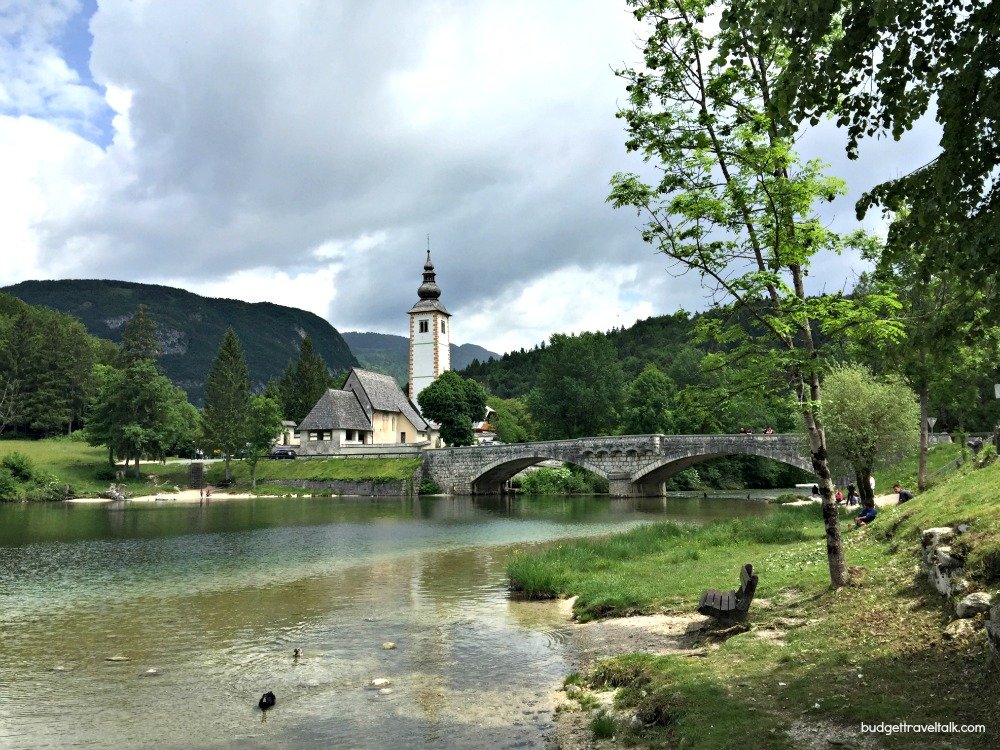 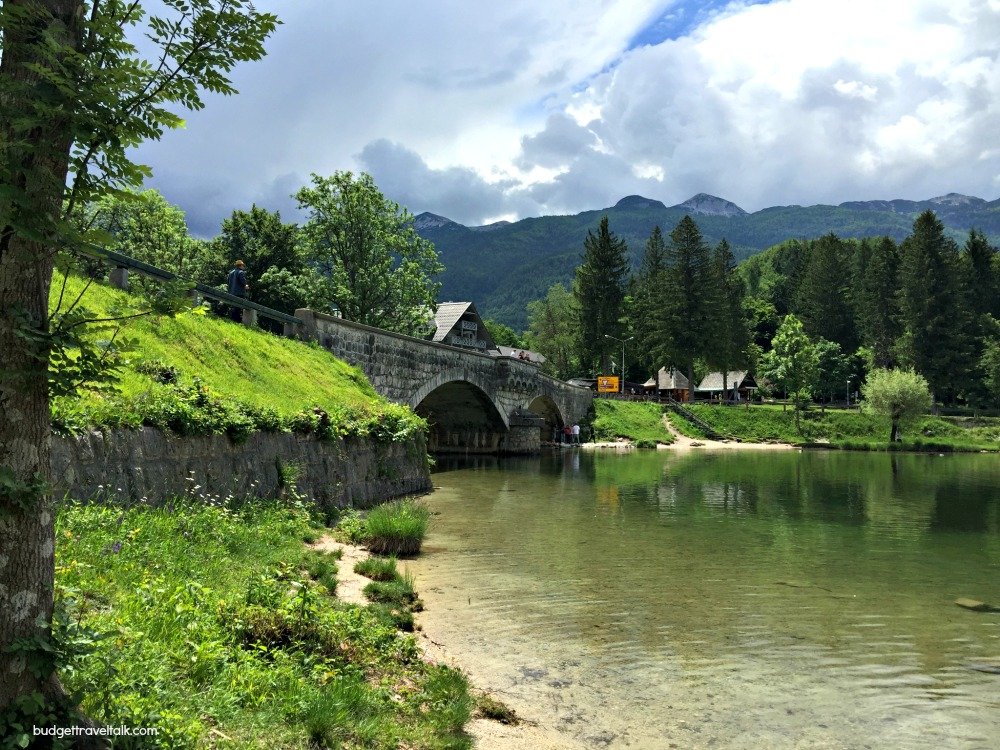 There are boats tied here and stacked there around the lake.  Some are brightly coloured kayaks and others like the one below fit the scene perfectly.  I have started adding photos from Lake Bohinj on the budget_jan Instagram page so pop on over and have a look.  There is a link in the sidebar – see you there 🙂 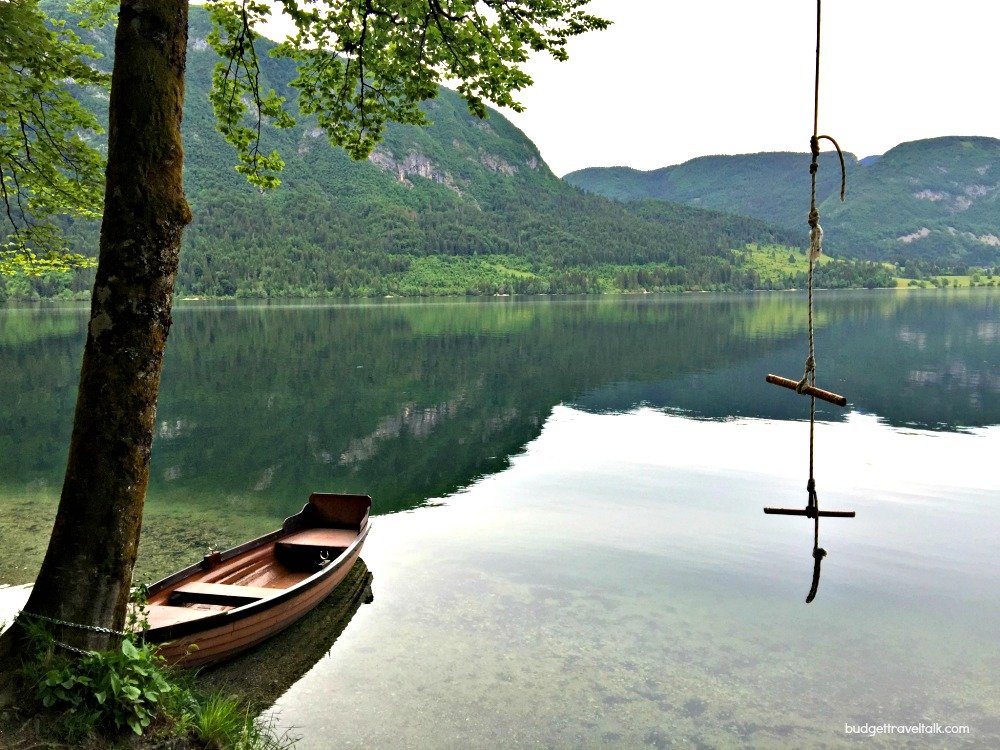 The village of Ukanc is around that bend – out of sight at the far end of the lake. 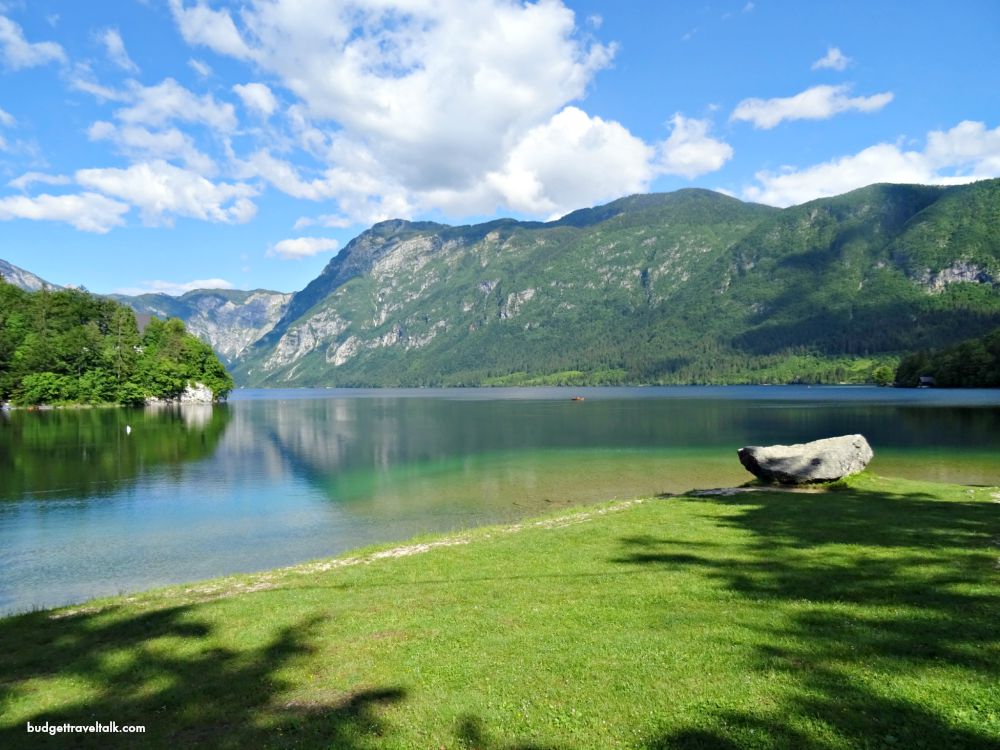 The hidden gem that is Lake Bohinj. 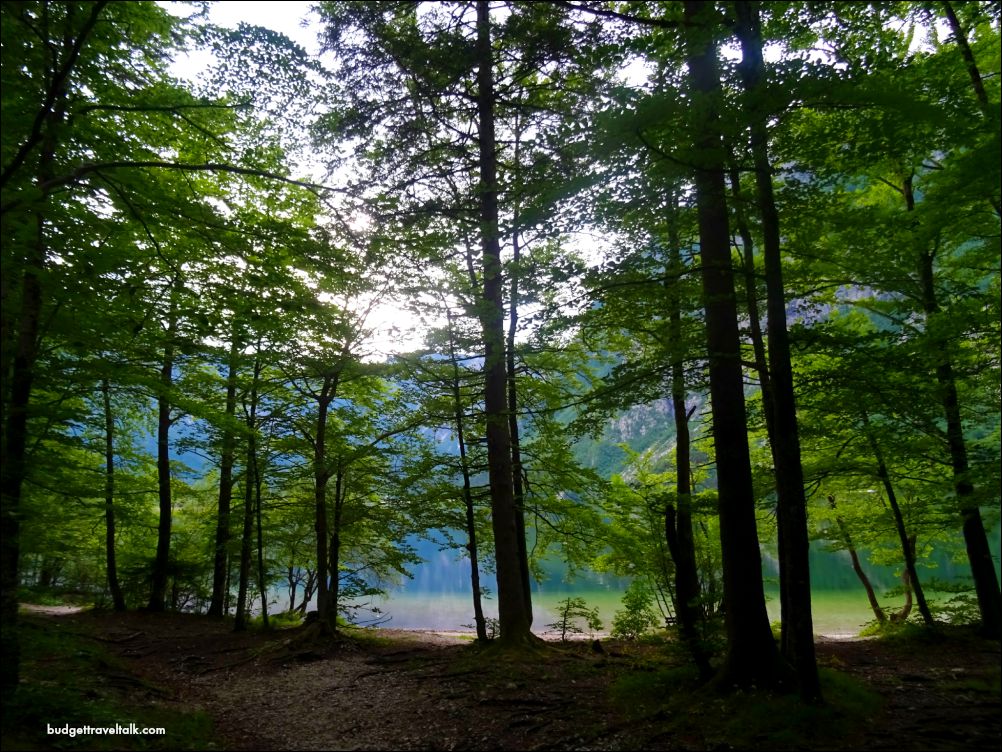 A 12km walking track surrounds the lake and schools of fish – I’ll call them trout – are clearly visible in the shallows. Fishing is allowed and permits can be obtained from the tourist office at Ribcev Laz. If walking the whole way doesn’t sound like fun, you can walk half way and catch the boat back…how civilised.

Ukanc is still out of sight at the far end of the lake, but can you see the fish up close?

Photo taken from the bridge near the Church of St. John. 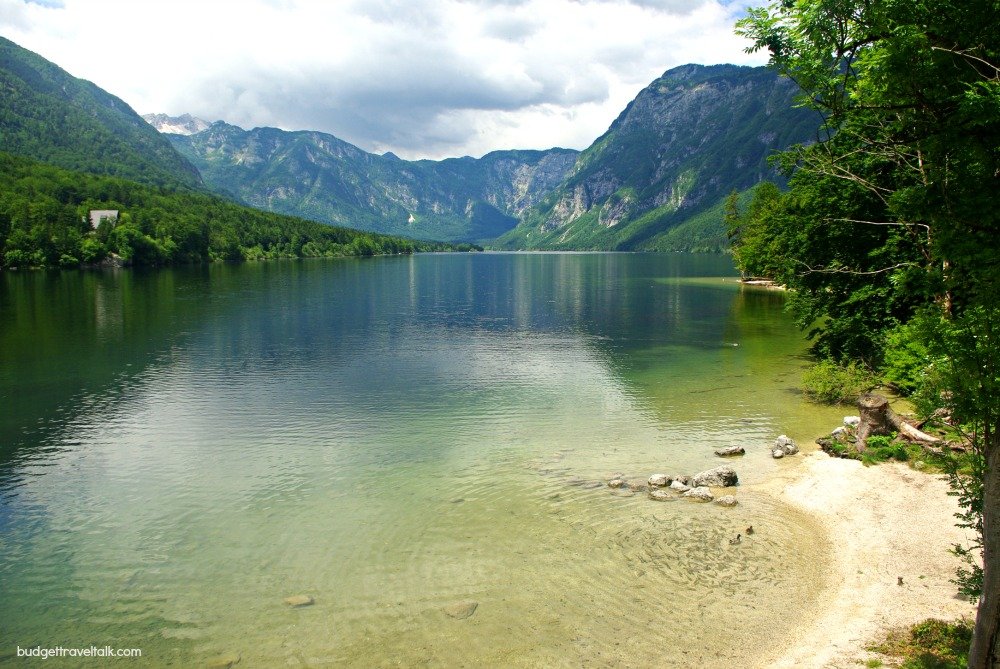 From Ukanc it is a short drive and a fairly easy 20 minute uphill walk to Slap* Savica.

The forest track which includes 553 stairs, starts past the cafe that serves lovely hot coffee.  But first we have to pay at the timber souvenir/entrance chalet. In Spring, wildflowers pop their heads up on the occasional grassy bank beside the path, where sunshine has found it’s way in. At the end of the path is a timber covered viewpoint in the front of the falls. The views are panoramic – behind to the waterfall, sideways to lofty peaks and forward to a sliver of lake hiding in a distant blue “V”.

The waterfall is the most visited in Slovenia so an early arrival, especially in Summer, is recommended 🙂

*Slap being Slovenian for Waterfall 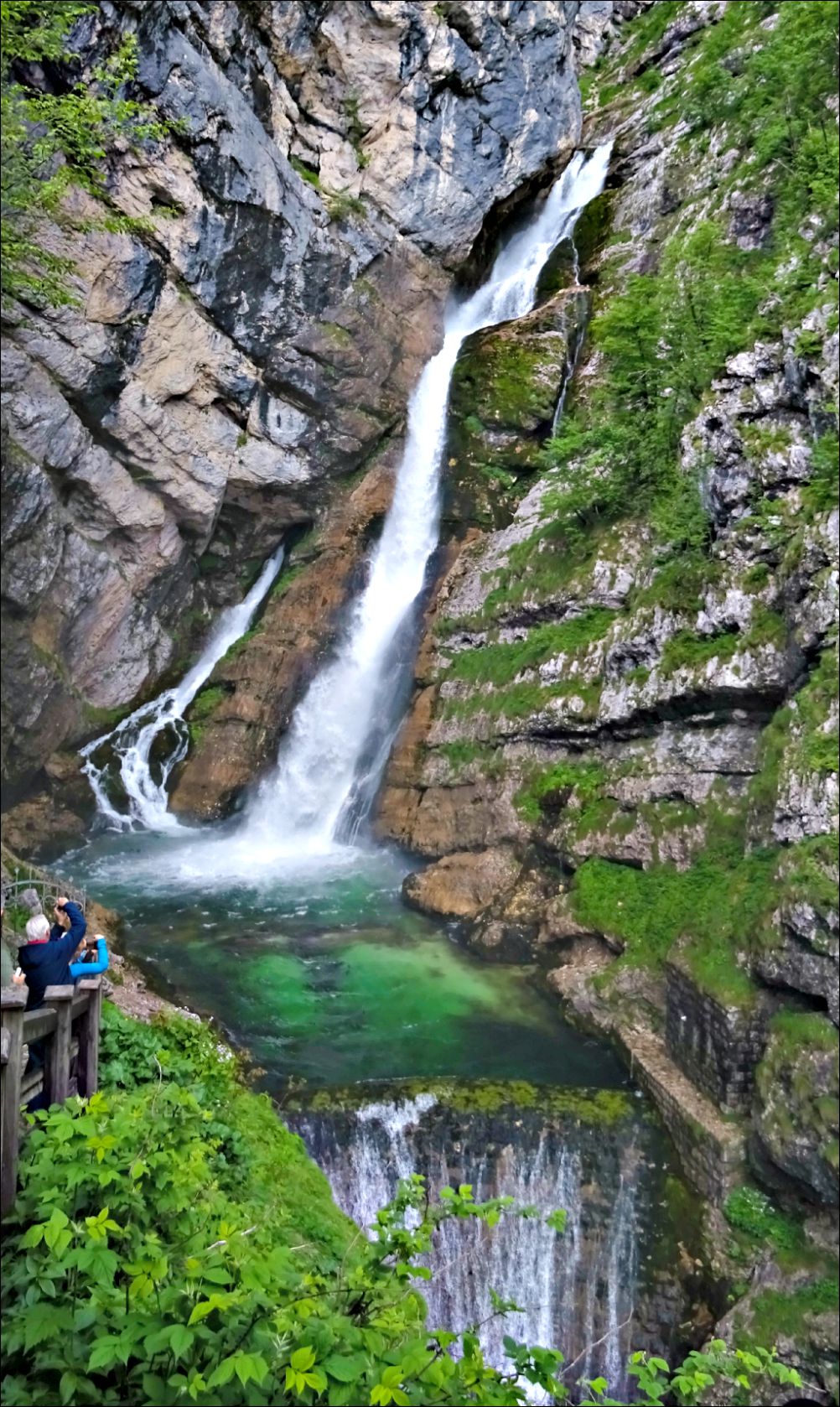 The view down the valley, taken from the trail. 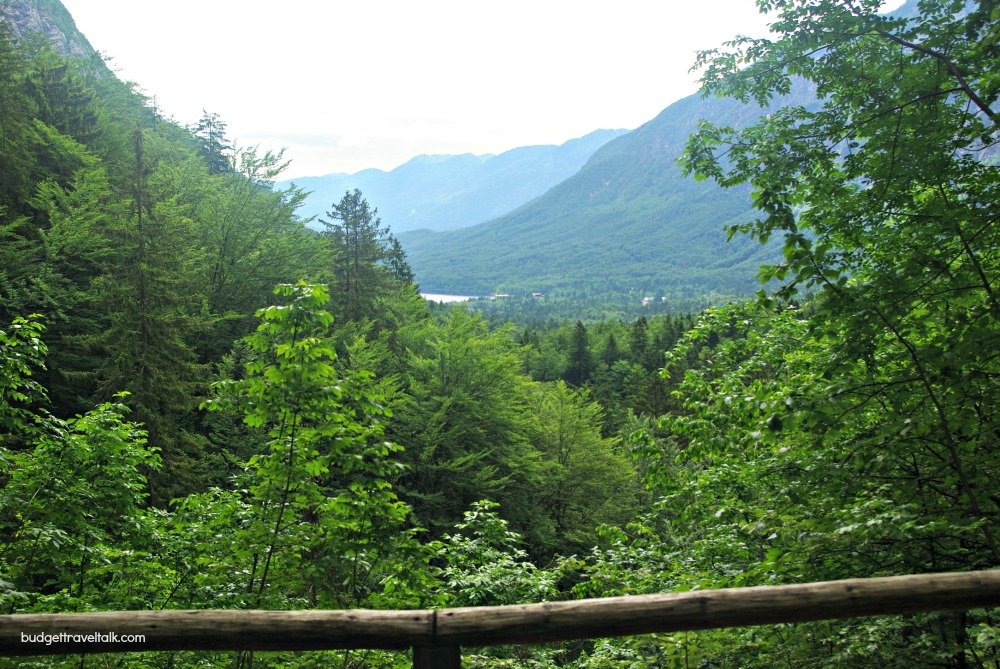 The Summer months. July and August are peak season at Bohinj.  Daytime temperatures peak at 30 degrees in a good season, making swimming popular, while nights reach a comfortable 20 degrees. Toward the end of May it was still too early for swimming.

The Winter months. Ski on 1800m high Mount Vogel. A chairlift at the Ukanc end of Bohinj whisks skiers to the top or you could get in the swing of things and climb. Either way, I hear the views from the top are spectacular.

Spring Time in Bohinj.  We loved the cool weather, tall green trees and clean fresh alpine air.  There was a captivating calm quality about Bohinj and the ever changing lake reflections were a photographer’s dream.

How to get to Lake Bohinj

We drove from Portoroz near Piran in the south, through farmland and mountains – lots of mountains.  Our route (shown below) went through Vipava, Adjovscina, Idrija:), Baca pri Modreju, Most na Soci (navigational error), Podbrdo, Nehmski Rovt, Bohinjska Bistrica.

From Ljubljana via Lake Bled.

From Most na Soči.  This particular route is very scenic with the final 6327m through the Bohinj Tunnel.

Both trains terminate at Bohinjska Bistrica with bus connections to Ukanc en-route to Slap Savica.

Make Lake Bohinj your base and day trip to Lake Bled, thereby solving the problem of finding budget accommodation at Lake Bled.

Hiking is best from Spring to early Autumn – maps available at the Tourist Office.

Kyaks and Mountain bikes can be hired.

A boat service operates regularly on the lake.

These apartments were recommended to us by my mountaineering In-Laws and booked on the Don Andro Website.

On arrival Denis, one half of the team, met us wearing his favourite AUSTRALIA T-Shirt.  He and Katja hope to visit Australia for a break toward the end of the year.

We loved the Alpine style building with it’s spacious pine interior and self-catering kitchen. Although there was a dining setting inside we opted to eat on the large deck overlooking the forest at the rear of our apartment.

It was literally nearly freezing outside at night, but the temperature in our room was pleasant even without the heating on. The bed (two separate mattresses on one base) was comfortable with warm individual covers.  My diary entry tells me the pillows were the best of the trip!

In summer, guests gather on the sunny terrace, with drinks flowing, music playing and a steady supply of pizzas arriving from Katja’s kitchen. As well as pizzas the licensed restaurant offers ala carte meals including breakfast. Coffees are accompanied by a chocolate thimble of forest fruit liquer regardless of the time of day – delicious!

In May the tourist season was just beginning and we enjoyed the relaxed atmosphere.

There is something special about being at the end of the road, surrounded by towering mountains, in a semi-wilderness of trees and a lake full of reflections.

Denis boasts that Lake Bohinj is the most beautiful place in Slovenia and I for one am not about to disagree!

Today is Travel Photo Thursday – add your link at the bottom – it’s fun!

Fall in Love with Australia at Notch Point
Next Post: Townsville to Gold Coast by Caravan and WikiCamps Australia