Ljubljana, Slovenia, is one of the smallest capital cities in Europe, but what it lacks in size, is made up for by an abundance of Charm. Stately baroque buildings, an ancient hilltop Castle, leafy green Tivoli City Park and gorgeous spring weather provide a winning combination.

Charming is a word that describes an awful lot about this liveable city of 300,000 people, but none more than her River and bridges. 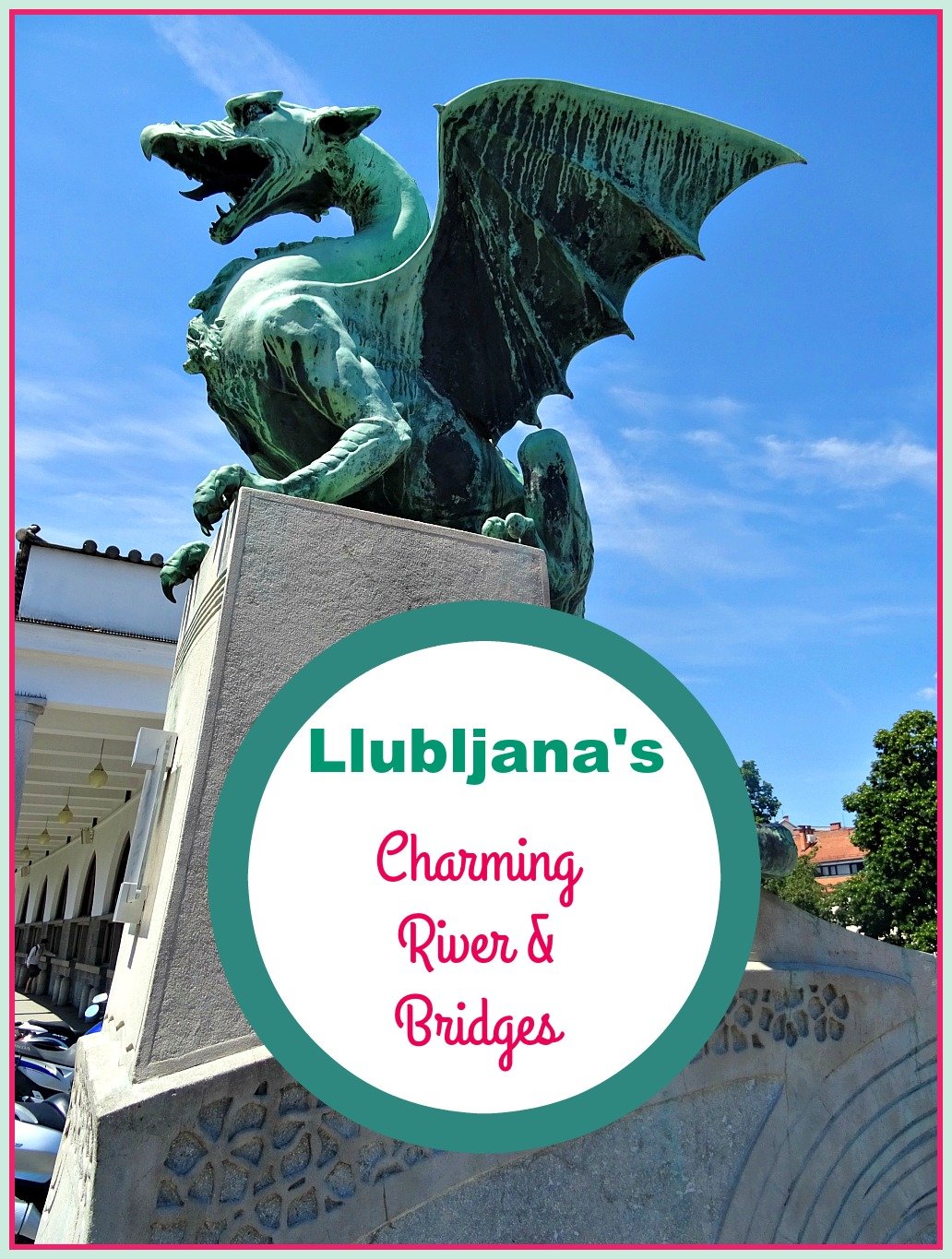 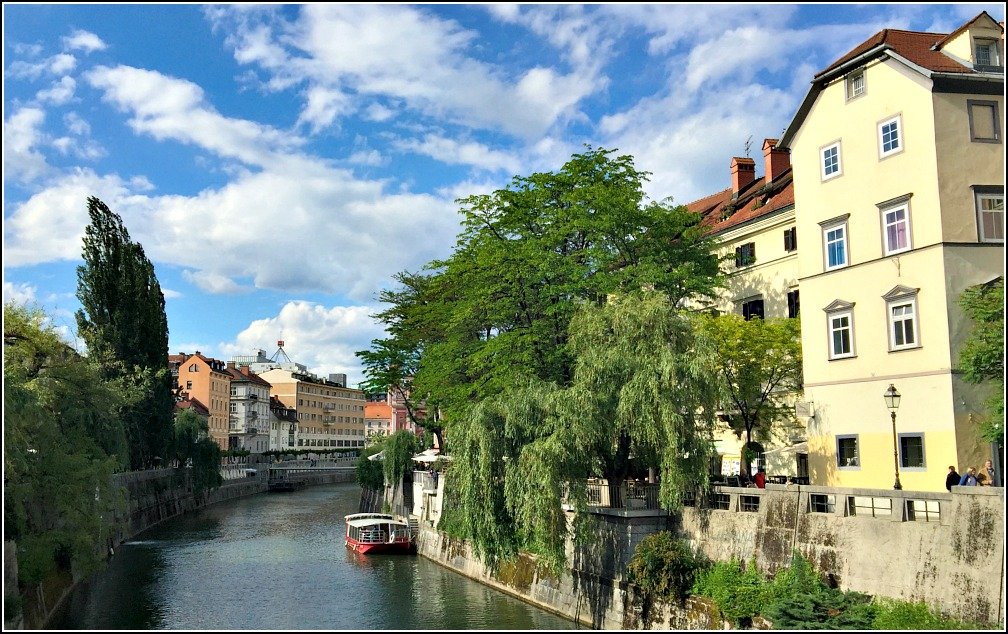 With a whopping 64,000 students, cycling is a popular way to get around, but the compact size of the old town and a matching chunk of the new, makes walking a breeze. 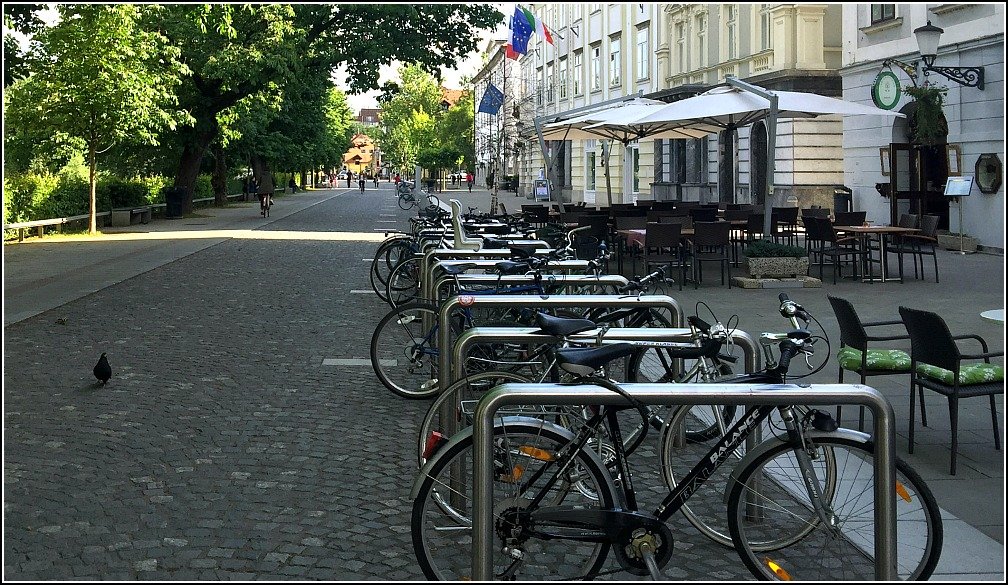 However you decide to navigate by day, there is no better way to enjoy a typical Spring Slovene evening in [lyoo-BLYAH-nah] than wandering along the river, finding a cute bar and sipping a well-earned drink.

Take in the view from a riverside bar. 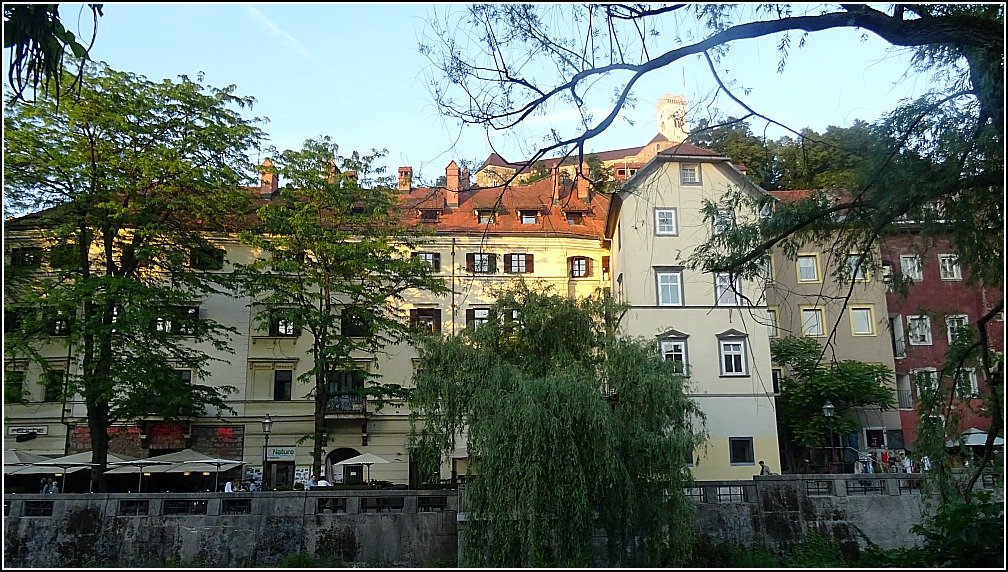 It’s true that there are 45 minute river boat tours (8 Euro), but a great way to get close and personal with the river is by using it’s bridges – multiple times – every day. We grew to love this abundant supply of bridges – no matter how disorganised we were a quick bridge dash remedied the situation. Anyway, who doesn’t like pausing mid-bridge to take more than a few photographs – let’s not get Marty started on that subject!

The Ljubljanica River and bridges. 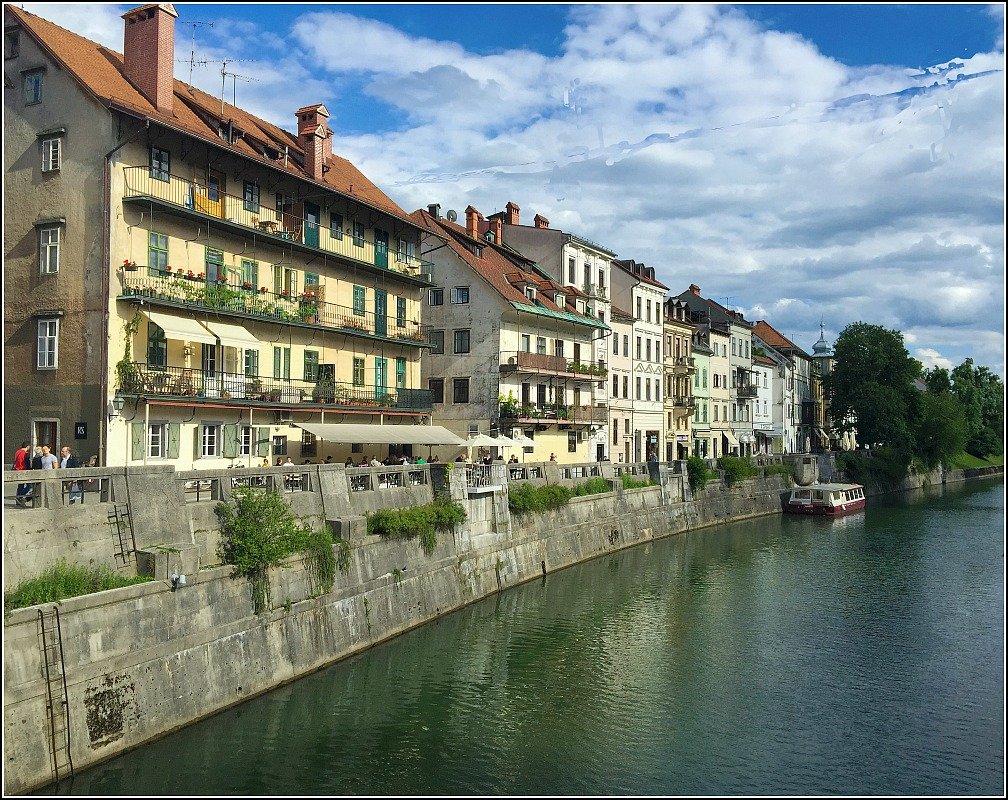 I’ve started with Triple Bridge because like a triple heart by-pass, it keeps the (city’s) blood flowing. It connects the festivals, protests, tourists, locals and buskers of Preseren Square on the western side with the medieval Old Town and hilltop Castle on the eastern. Streets fan out from the square collecting people and directing them toward the bridge. If you need a place to people watch while eating a gelato, do I have the spot for you.

The original 1842 (Giovanni Picco) stone arched bridge is the middle of three, the other two foot bridges were added in 1932. The name of the architect who designed these extensions is Jože Plečnik. His name will become very familiar in this post so from now on we’re on a first name basis only. This piece of town planning genius stops a bottleneck developing as everyone converges on the bridge. I’ve not seen a set of bridges like this before – the outer two run off at a different angle. 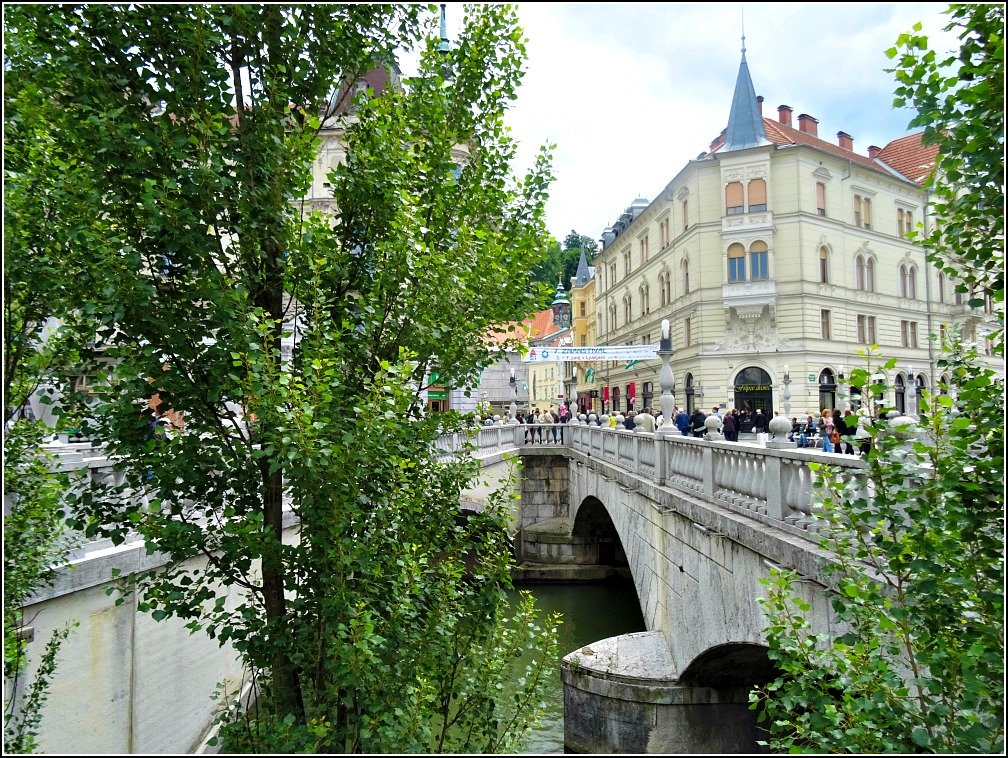 After crossing the river, turn right to Cobblers Bridge or left to the Colonnades, Central Market, Butcher’s Bridge, Dragon Bridge and the Sluice Gates. The Castle can be reached on foot from behind Central Market. 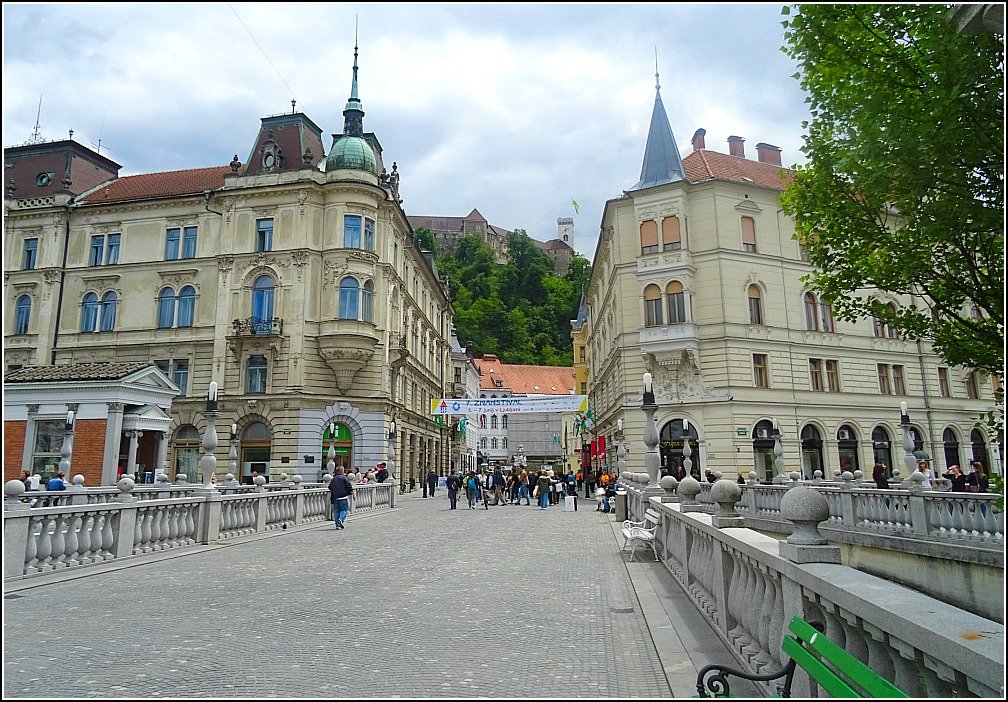 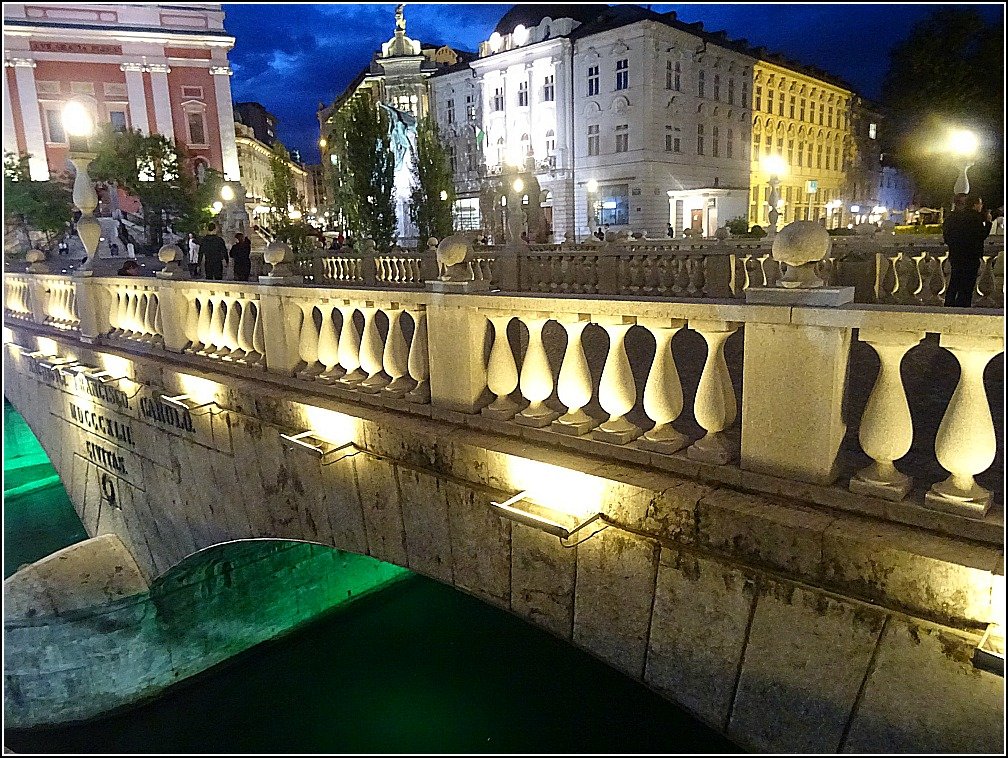 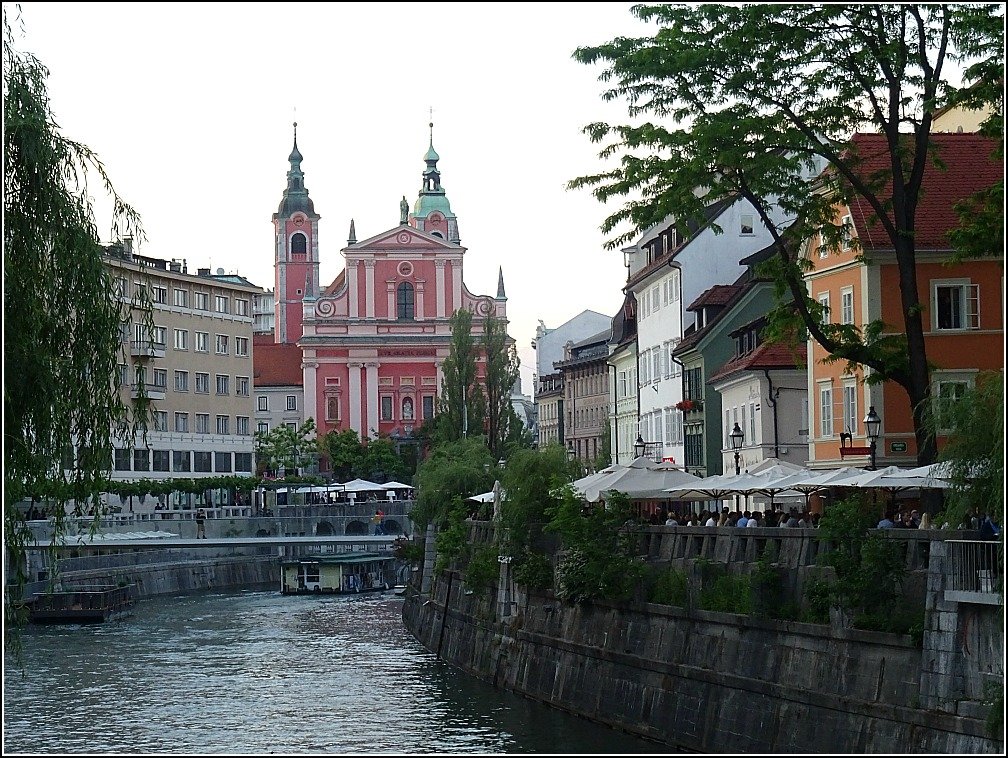 Cobblers Bridge comes in handy when you need to get from Mestni trg to Novi trg on opposite sides of the river. The first bridge to serve this purpose was a covered timber bridge that housed cobblers’ stalls. The current artificial stone bridge was built by Jože between 1931 and 1932. This design differs to his others by it’s striking array of different sized pillars supporting lights and balls. A lone pottery sale display was set up centre bridge on this day. 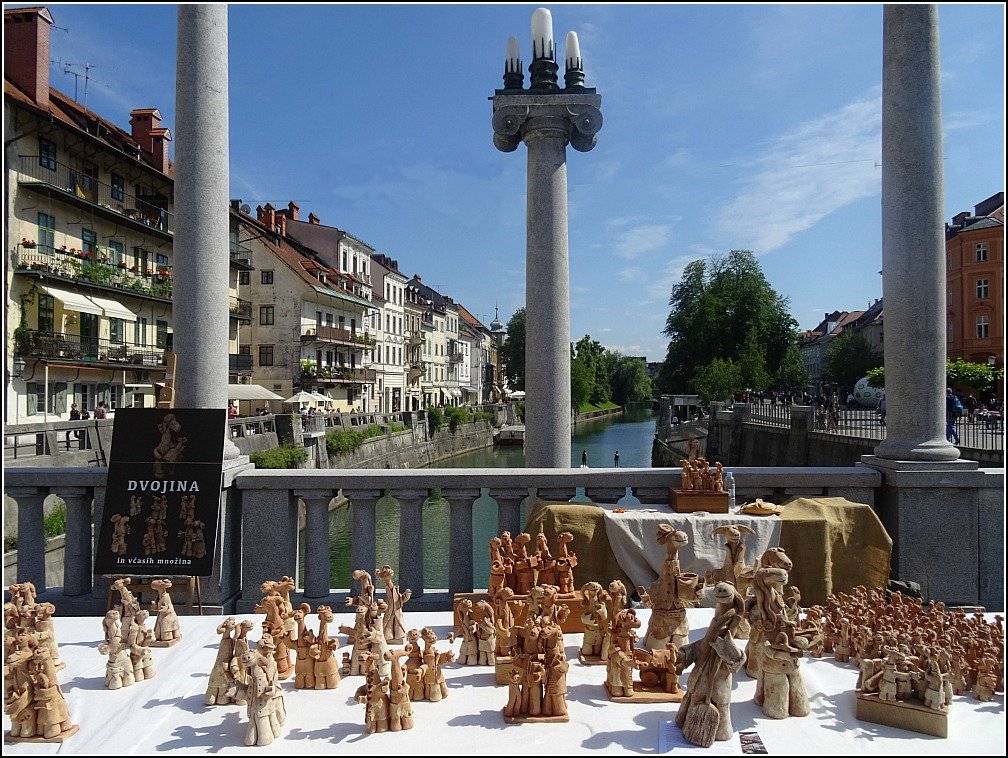 The bridge can be seen here peeking through the trees. 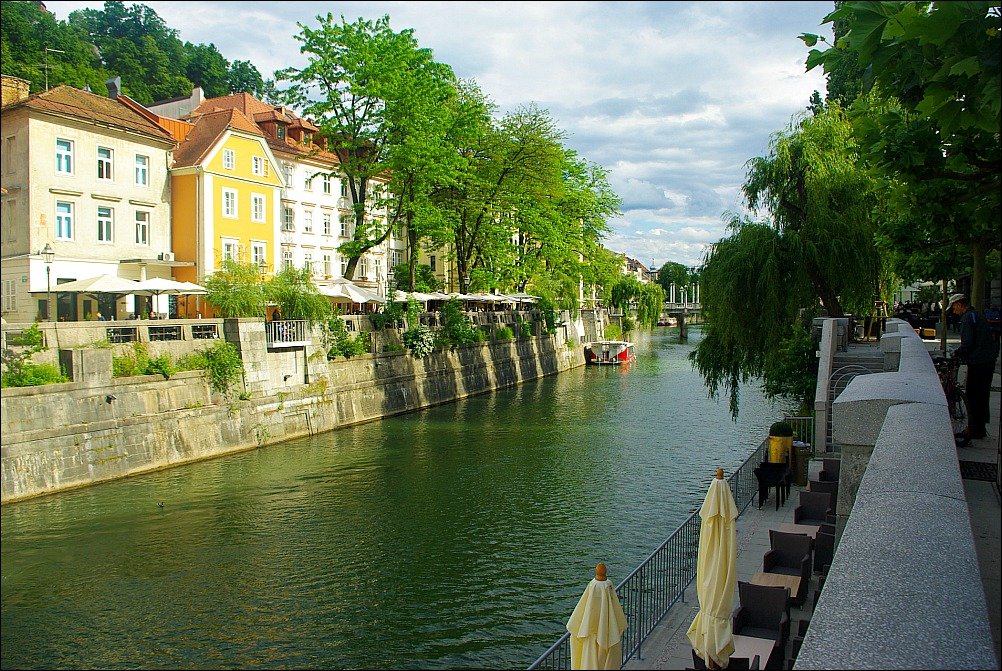 A Colonnade runs on the eastern bank from Triple Bridge to Butcher’s Bridge. Opened in 2010, Butcher’s connects Central Market with the northern side of the river. Jože planned a bridge here in 1930 but it wasn’t built until 2009 having being designed by Jurij Kobe and expenditure finally approved by Council. The balustrade wires of course are full of love locks, with two interesting glass sections underfoot and decorative sculptures by Jakov Brdar. Of Bosnian heritage, Jakov graduated from Ljubljana’s Academy of Fine Arts and Design.

Friday afternoons on the bridge are standing room only as it caters for the overflow from the Open Kitchen food market held at Central Market. I don’t know the origins of the bridge’s name but I’d bet it has something to do with the butchers of Central Market.

Slovenia embraces the weird when it comes to sculpture. This is only one of the many pre-historic creatures squatting along the wide balustrade tops. 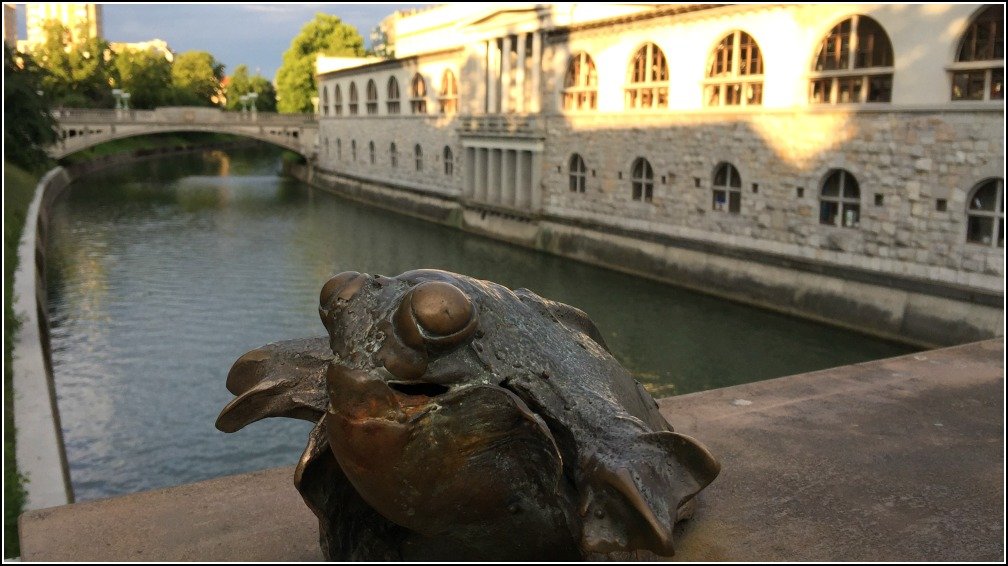 Adam and Eve. Shamed and banned from the Garden of Eden. 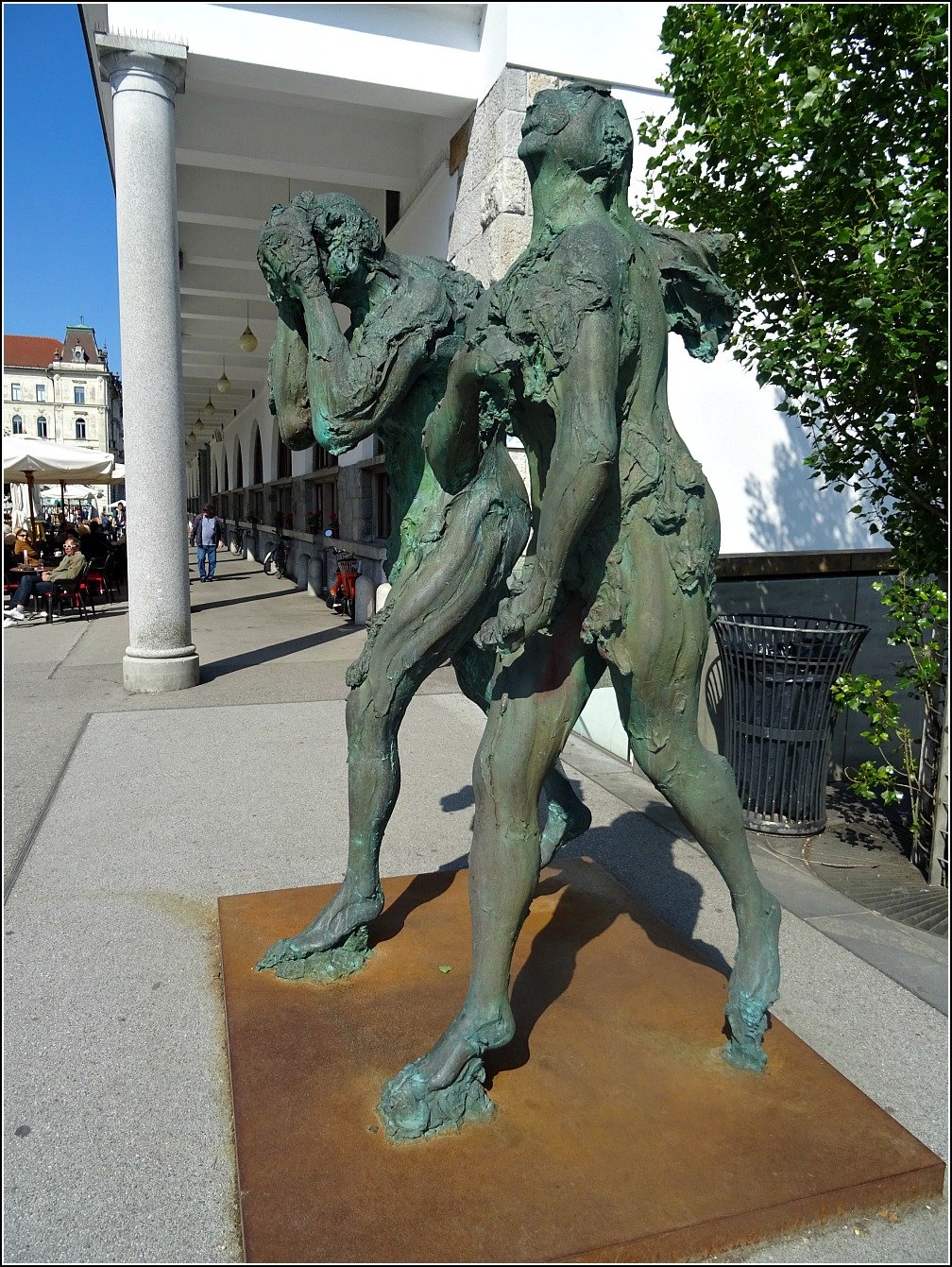 Prometheus. Mythology has him running and disemboweled, in punishment for having given knowledge (of fire) to mankind. 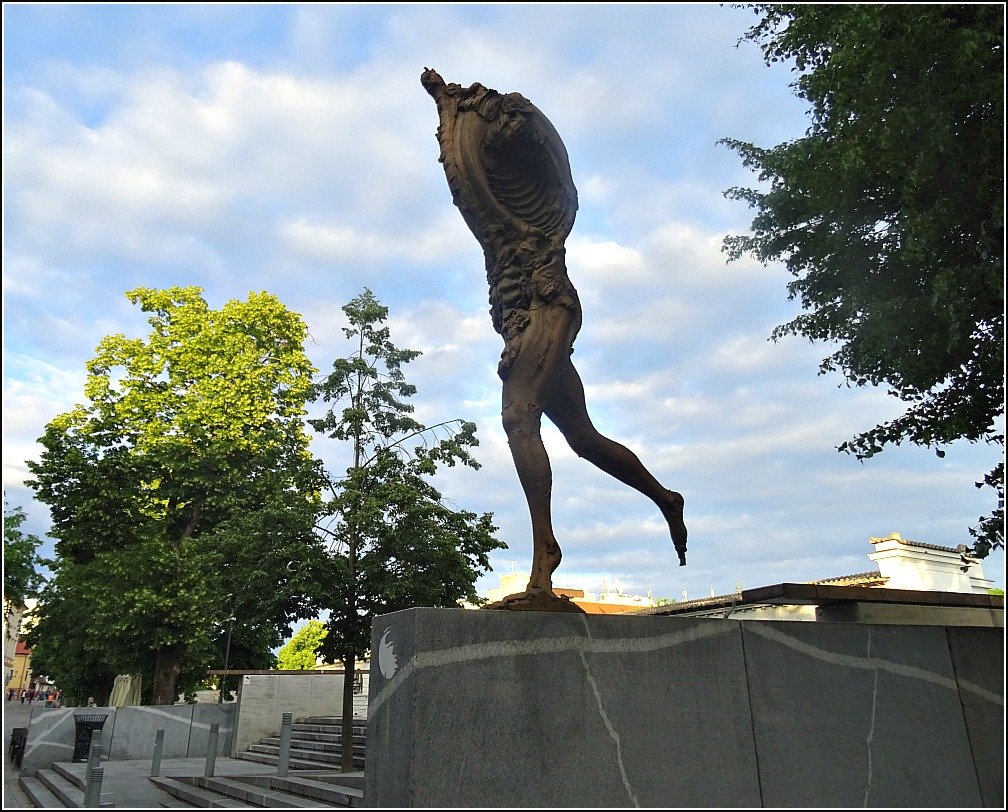 You can see Satyr (startled by serpent), the third of his statues from Butcher’s Bridge here.

Built in 1901, this bridge with it’s four Dragon sentinels was designed by Zaninović, a classmate of our friend Jože. He designed the concrete slabs in which the reinforced concrete structure is clad, the balustrades, and the sheet-copper dragon statues, which incidentally were originally meant to be winged lions. In a confusing twist this replaced a previous timber bridge called Butchers’ Bridge! 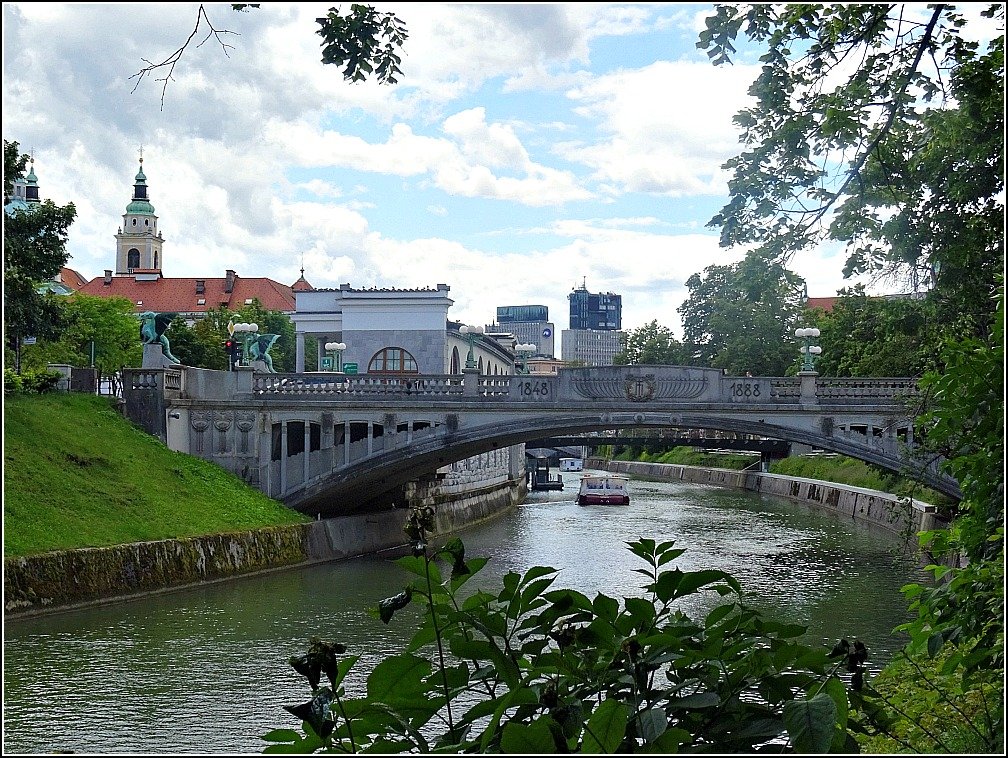 The dragon symbolises power, courage and greatness. It’s likeness can be found at the hilltop castle, on the City’s Coat of Arms and here on Dragon Bridge. 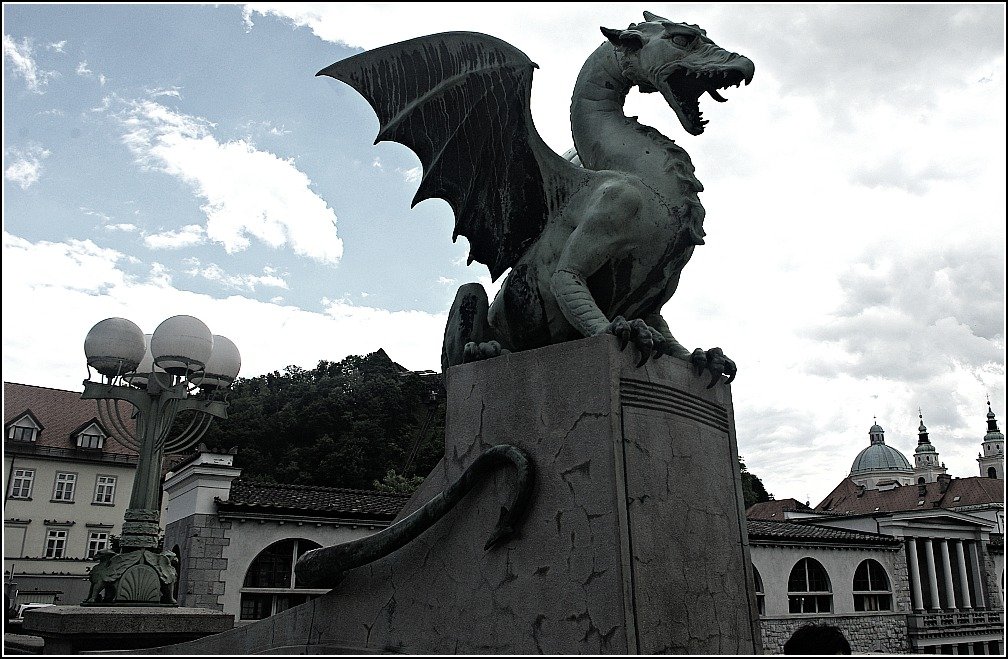 They say if you haven’t posed with a Dragon you have visited Ljubljana!

Situated between an abandoned sugar factory and Vraz Square this gate was designed by Jože in 1939 but completed in 1943 by builder Matko Curk. It was designed to double as a Triumphal Arch, farewelling the river as it leaves the city centre. Nice one Joše. 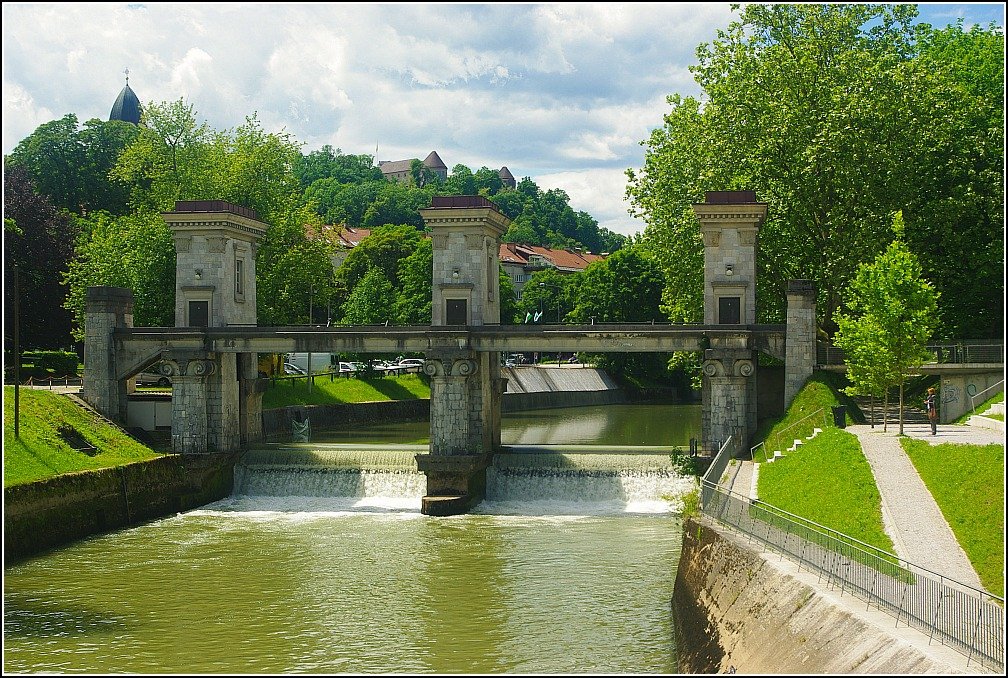 The origins of the name Ljubljana are inconclusive, but there is general consensus that it has something to do with the Croatian word ljubljena meaning beloved.

Thanks for reading and commenting – we really appreciate it. If you have a blog, please add a travel post to the link below for Nancie’s Travel Photo Thursday which we co-host with Ruth from Tanama Tales and Rachel from Rachel’s Ruminations. This week we’ve also linked to Contented Traveller for some Weekend Travel Inspiration.