Ait Ben Haddou is a ksar (fortified village) on the ancient caravan route that linked Sudan with Marrakech.  I toyed with the idea that those camel caravan traders that passed through were the very same ones that stayed in the lodgings we were shown in the MARRAKECH SOUK.   The thought of the trade-laden camels crossing the desert to the very same place on which I stood seemed impossibly romantic, but was quite probably fact. 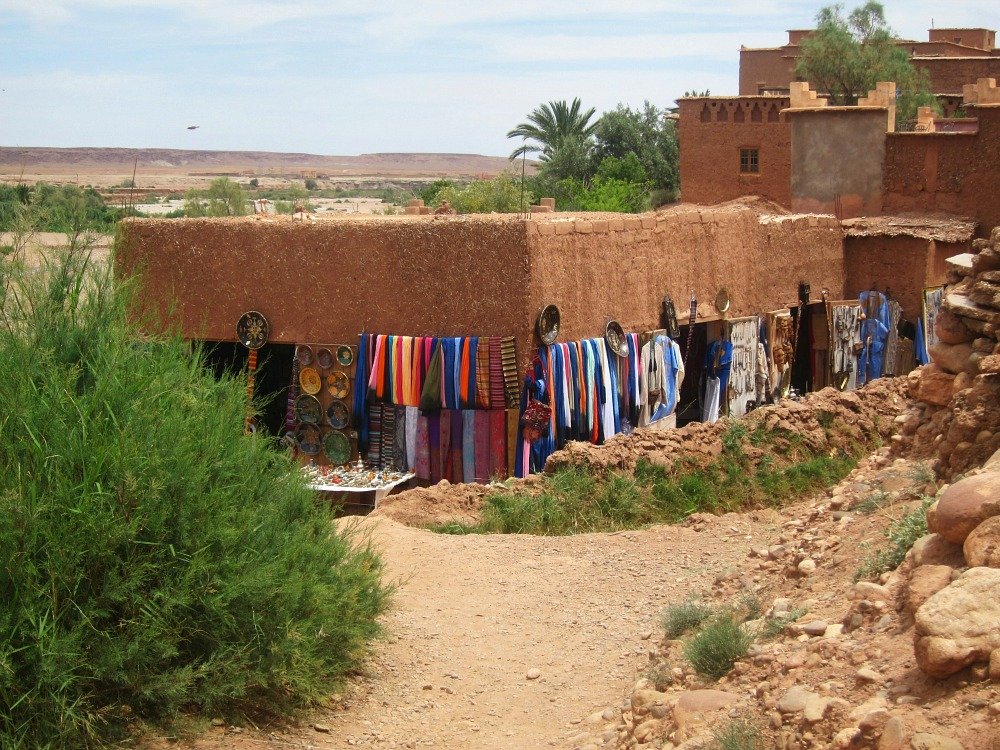 Although we had seen the ksar from afar, this was our first view of it from the New Town side of the Maleh (Salted) River.  We headed across the river with our guide for the ksar. 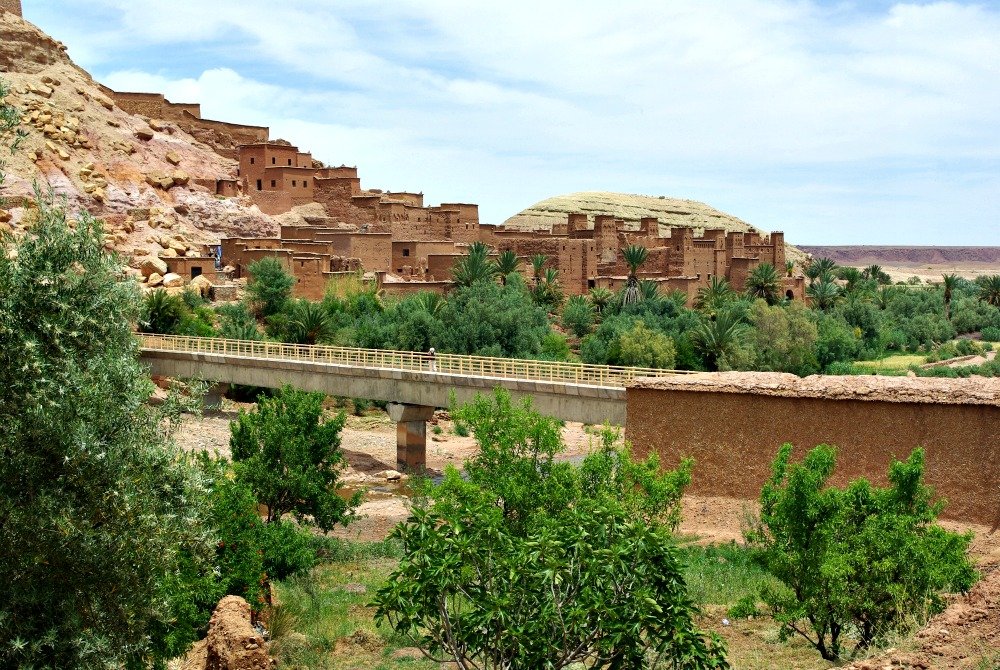 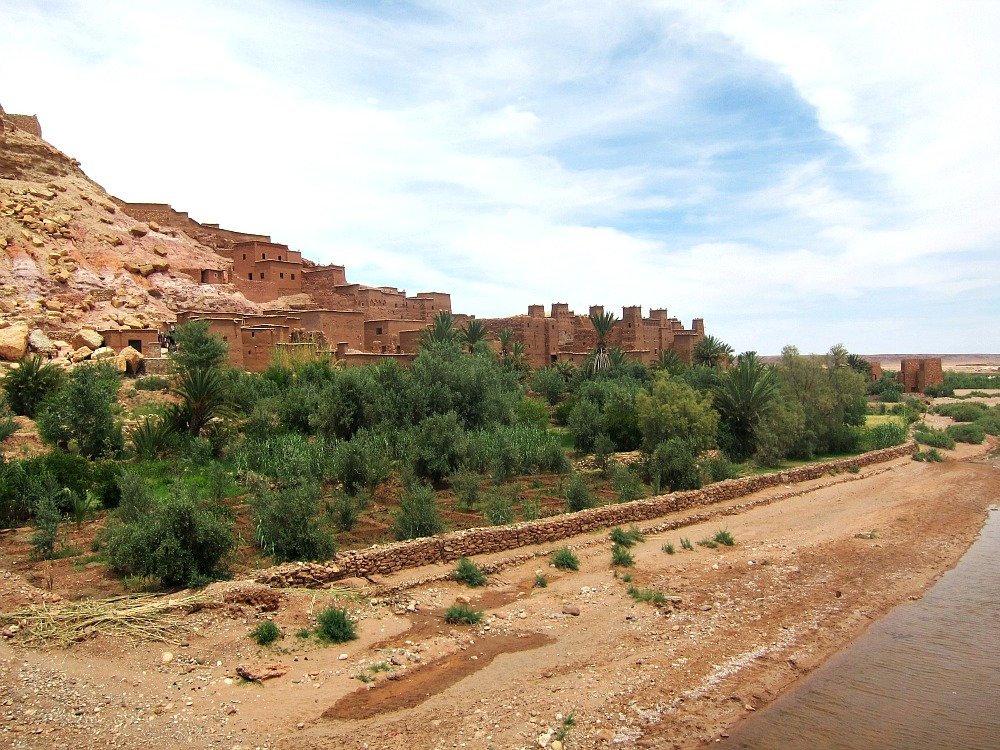 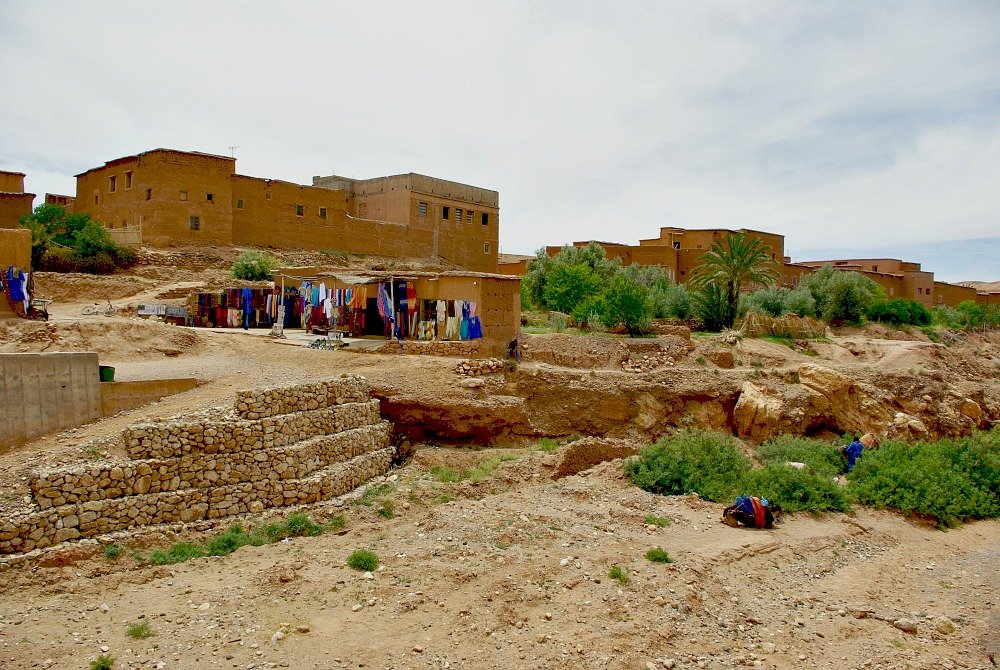 Most families live in the new town but a few still remain in the old.  This house, close to the river, with easy access to water, was the only one we saw with a garden. 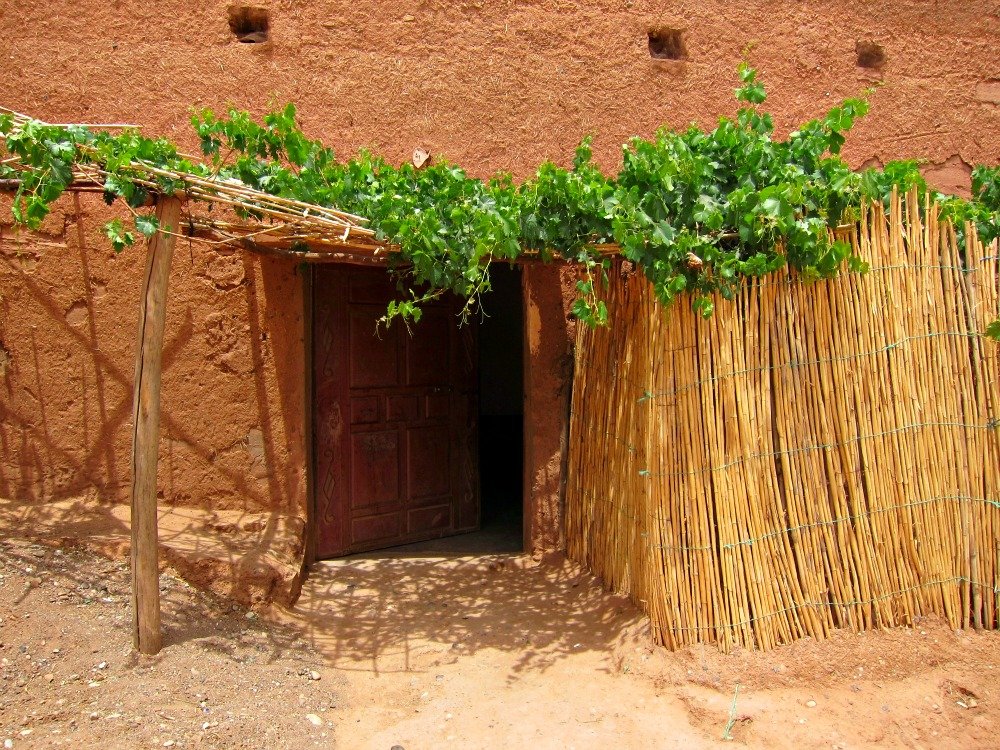 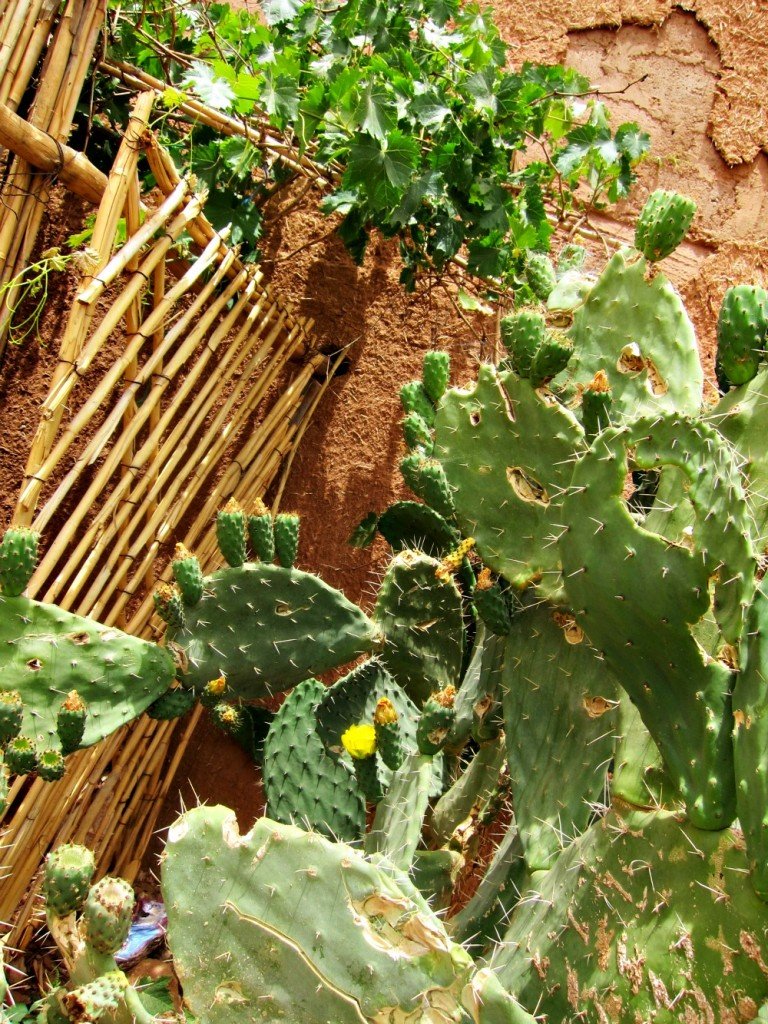 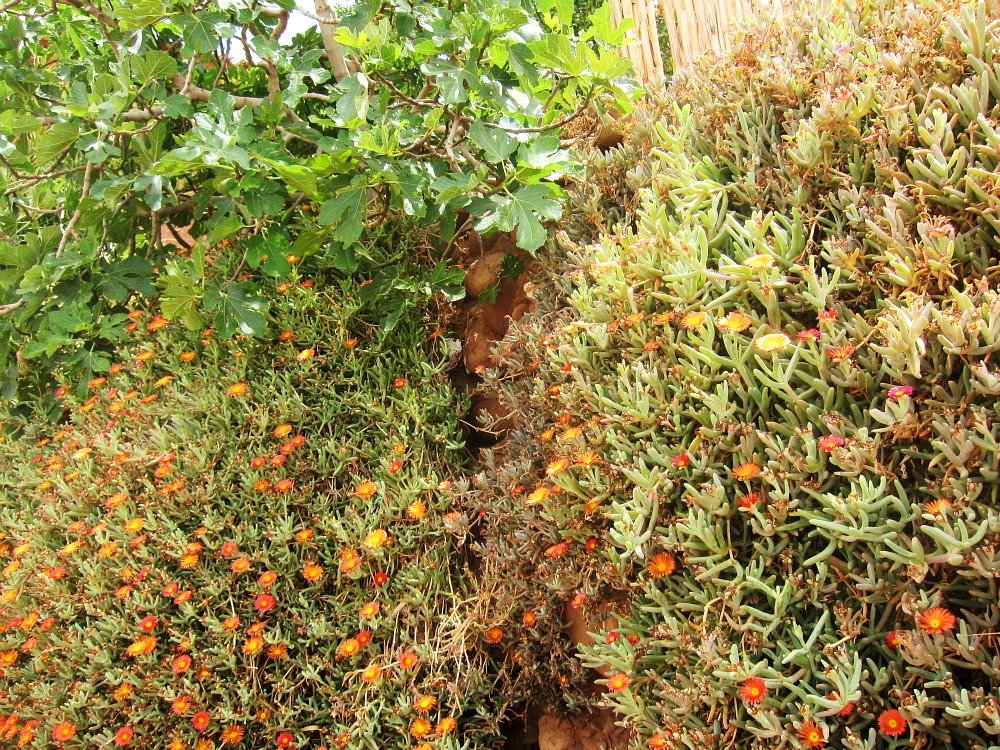 Since 1963 more than 16 films including, The Jewel of the Nile, Gladiator and The Mummy, have been shot using the beautiful walls of the ksar as a backdrop. 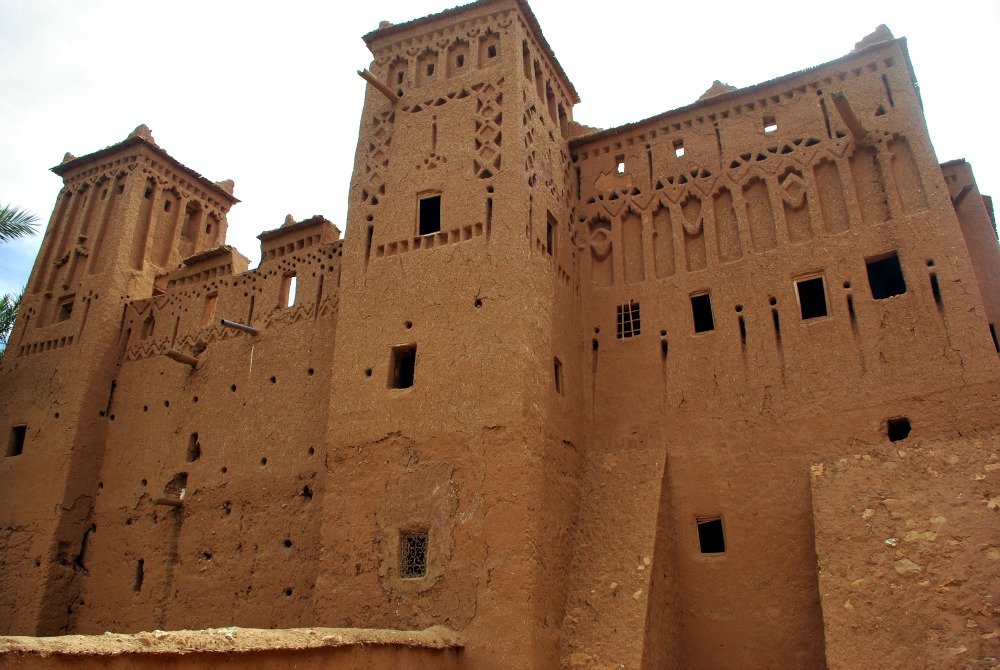 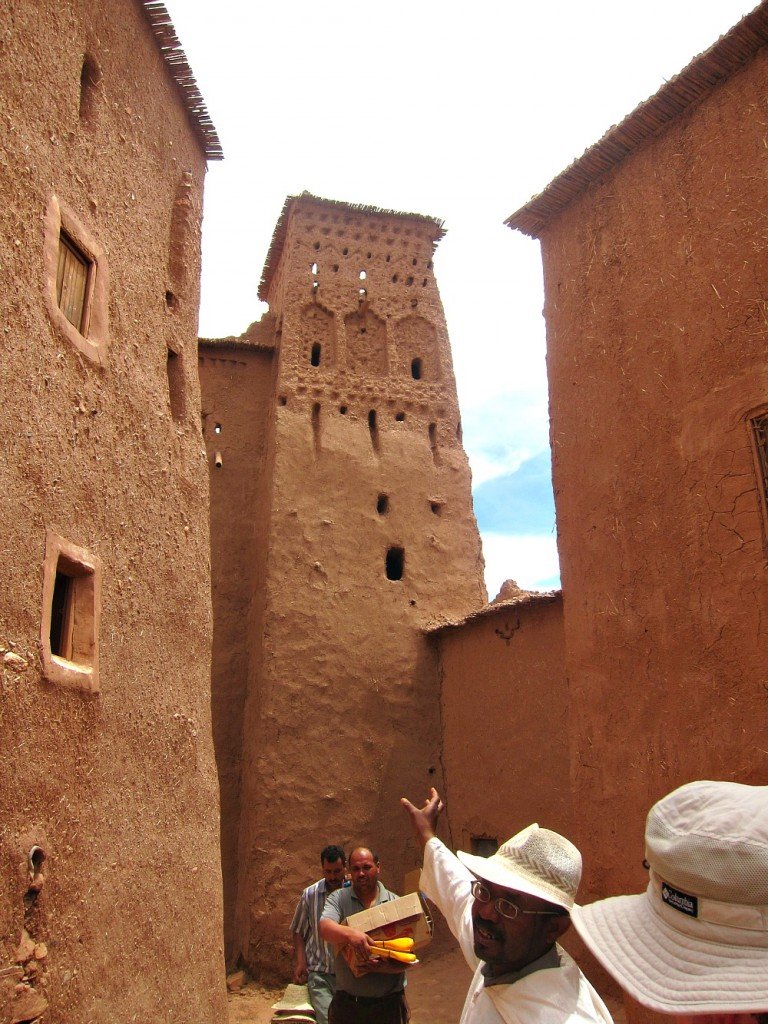 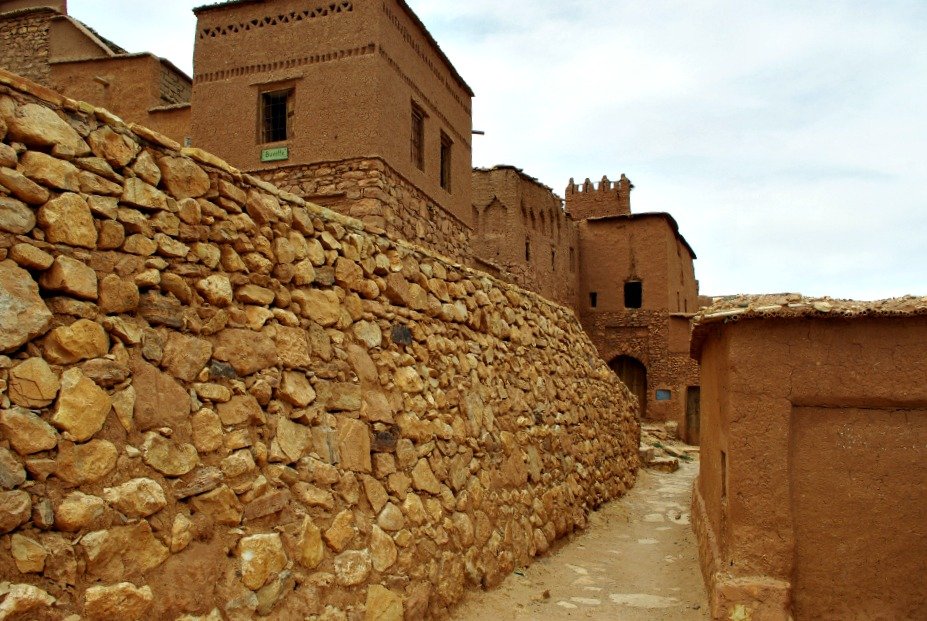 As I approached the young girl seated on the step that formed part of the path, she looked up from her sewing.  With a look of recognition at my camera, she subtly looked back down at her work and posed, after which we exchanged smiles.  But before I could show her the image, her mother came from the house and hurriedly motioned the girl back inside.  Maybe my subject had dreams of starring in her own movie one day, but one thing is for sure – she was as happy posing for the photo as I was taking it. 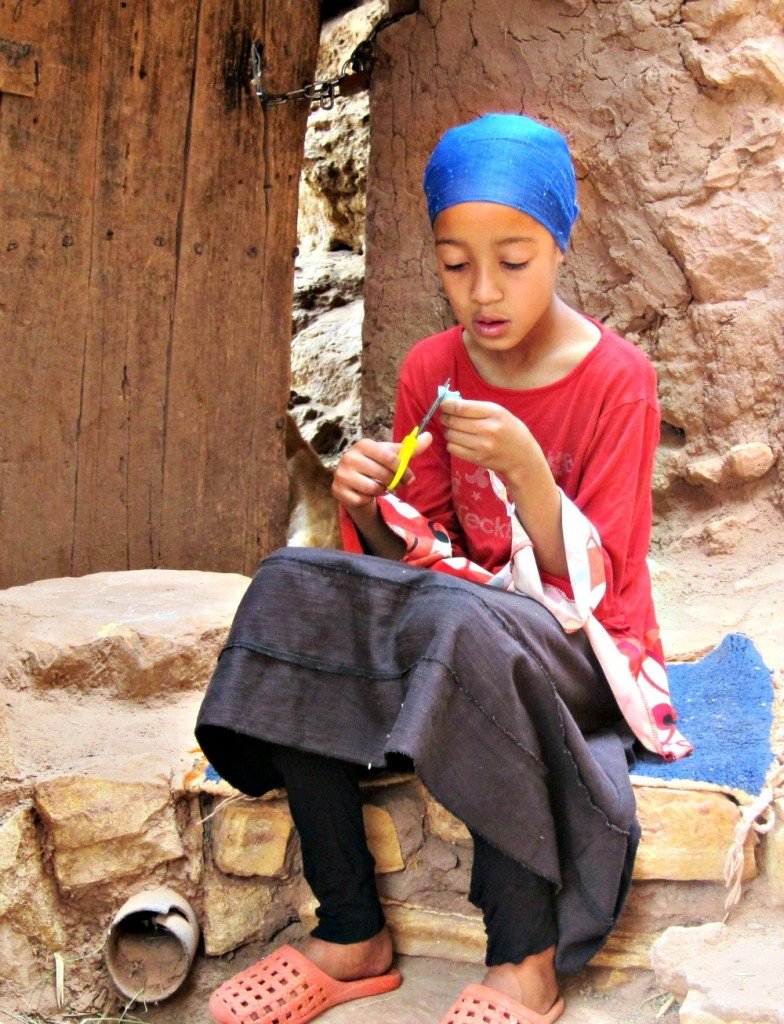 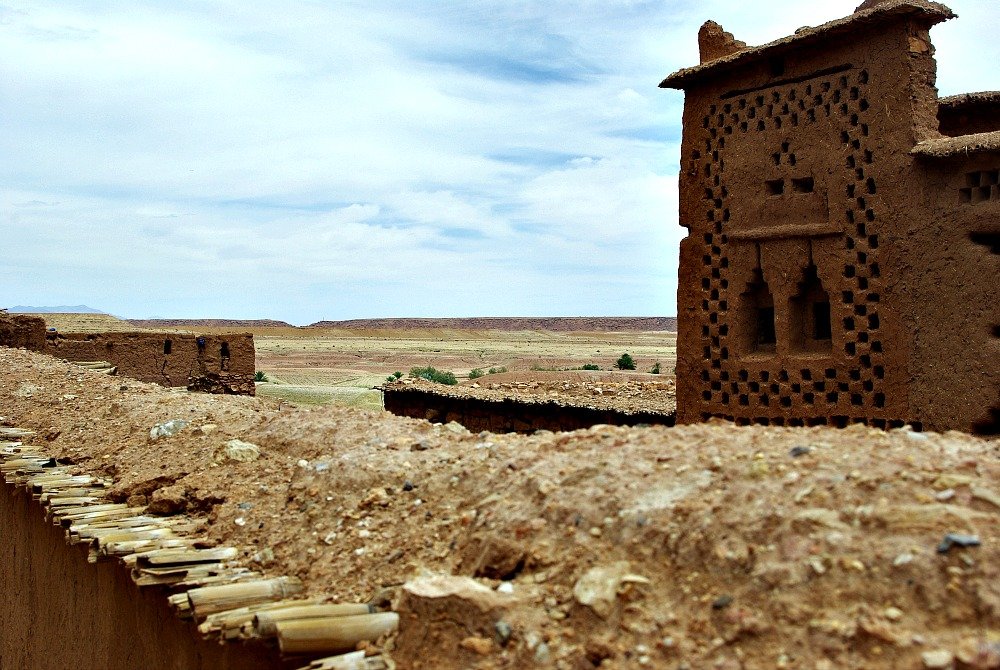 The green of the river valley at Ait Ben Haddou is in stark contrast to any of the land that surrounded it.  The abandoned building from which I first photographed the ksar  (SEE POST 2 OF THE JOURNEY HERE) is located in the far right of the below photograph. 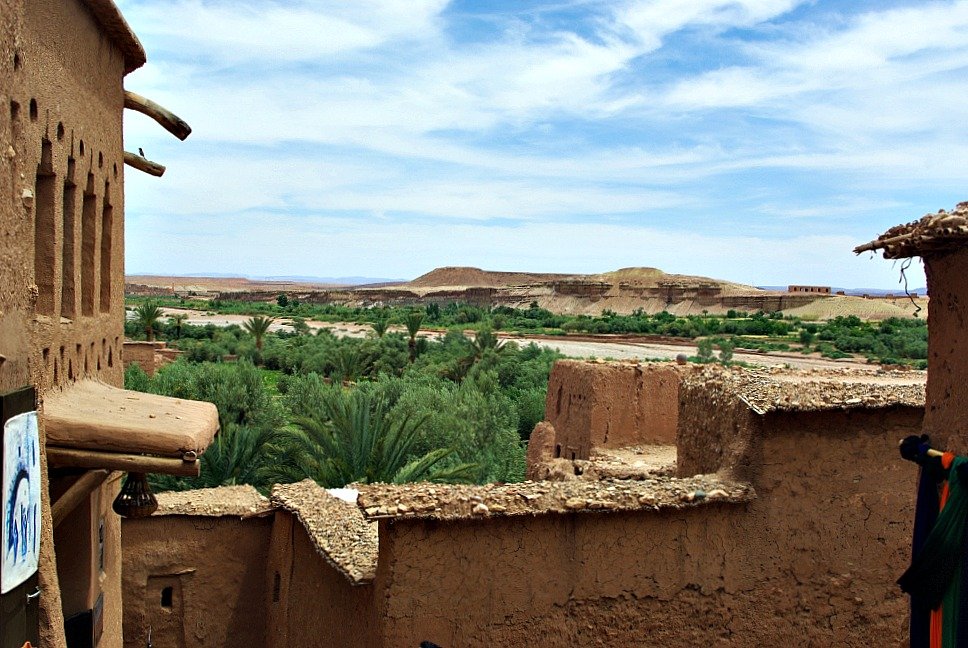 I suppose that the earth surrounds of the bushes in the photo below, help to contain the precious water around the plants. 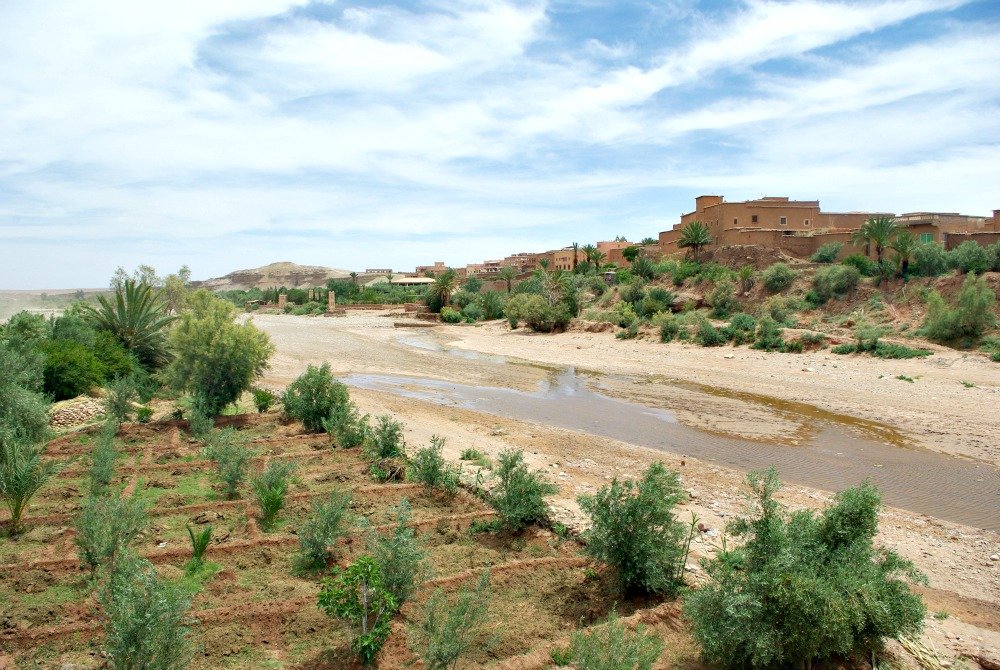 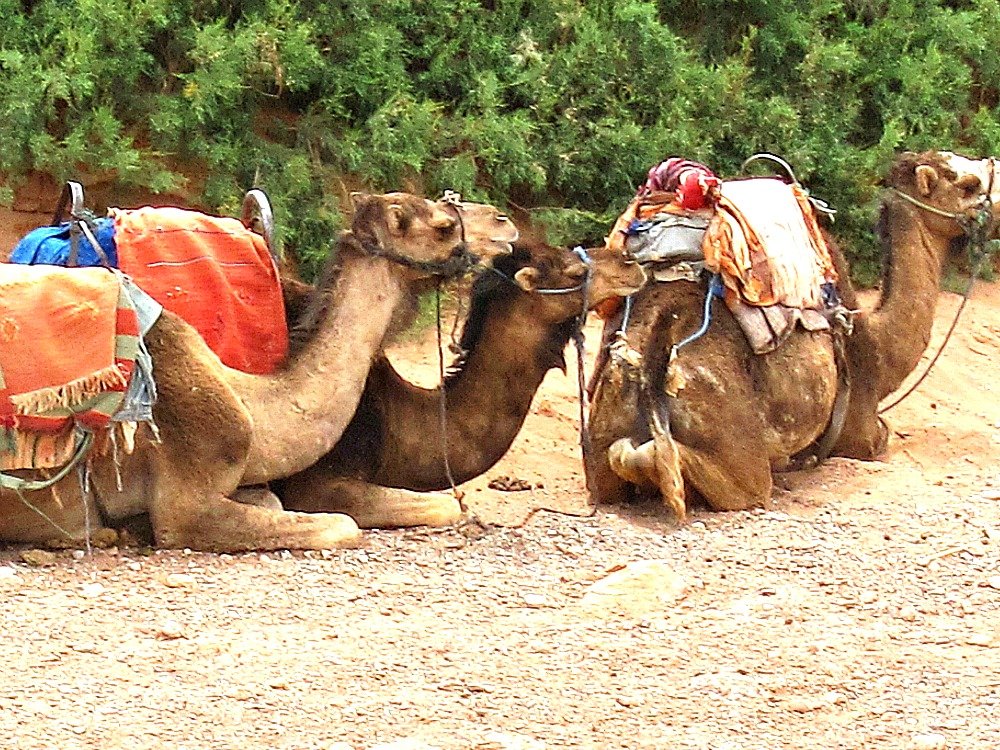 On exiting the ksar, we were overtaken by this man on his horse.  This was the best looking horse I had seen so far in Morocco – I wonder if it was a movie horse? 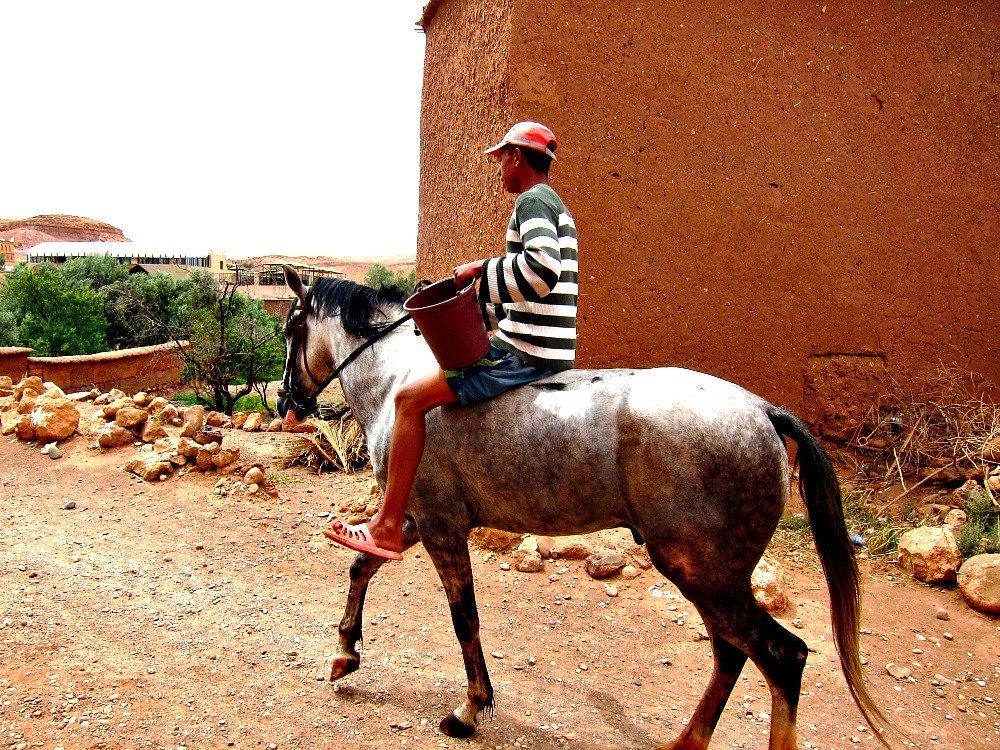 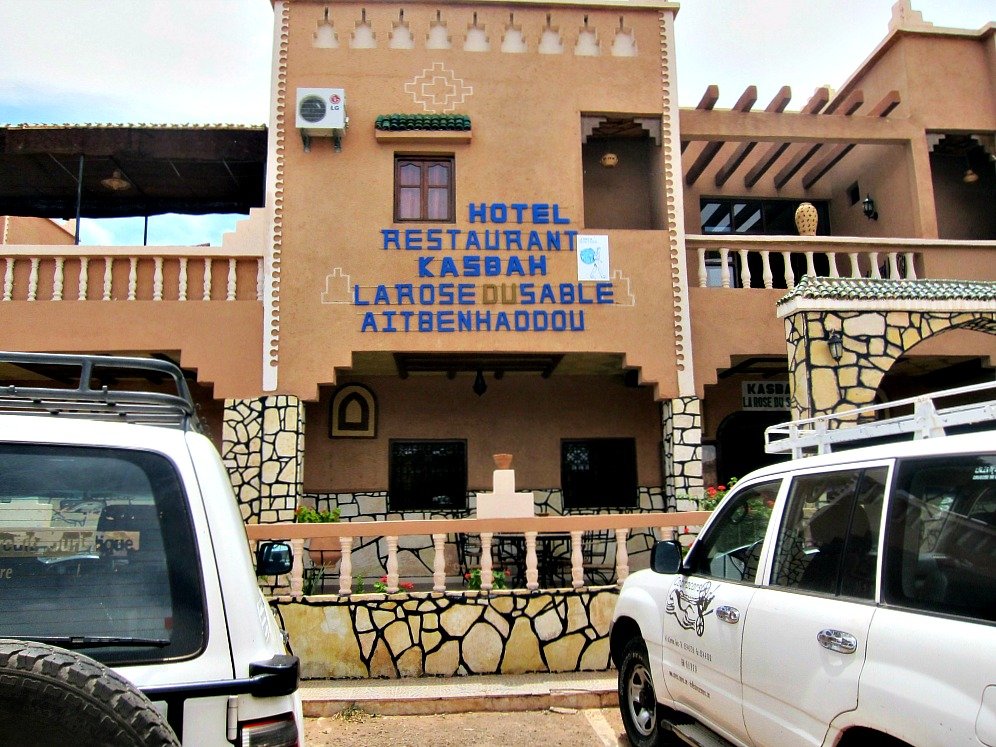 We had lunch on the terrace (top left of photo) of the La Rose du Sable hotel restaurant overlooking the swimming pool, seated beside two smartly dressed young men whom I took to be from the movie industry.  Rates from $15/room.   No Alcohol served.  But we were not staying, we were headed for the Valley of the Roses and our night stop in the Dades Gorge.

Budget Travel Tip – If you are on a tight budget you can ask to sleep on the Terrace at the Hotel – $5/night.

March to May and October to November are the best times to visit to avoid extreme temperatures.

The Scirocco is a hot desert wind that blows in summer and makes life pretty unbearable.

Earthen walls like those of Ait Ben Haddou can disintegrate after rain.  (Our riad owner in Marrakech pointed out one house in the souk that had recently  been purchased only to disintegrate after a sustained bout of rain).  The decorative walls of the lower houses of the ksar are maintained by traditional methods under Unesco authenticity guidelines.

The old granary was situated on the hill top within the fortifications so that any marauders could not steal the grain, thereby starving the townspeople out.

50 km further on the road from Ait Ben Haddou, in a valley surrounded by palm, fig and olive trees is the kasbah Telouet, originally inhabited by Glaoui family, which is not under Unesco protection.  Unfortunately our tour did not visit kasbah Telouet, but mention it if you are booking with the same tour operator as us (I will list it in the last post) and they may include it.

Visit BUDGET TRAVELERS SANDBOX to see travel photos from around the world.

Photos of Townsville
Next Post: Fantastic Friday Photo – Which Jetty