Updated November 2017. Time to get our road trip from Marrakech to the Dunes of Erg Chebbi, Morocco, back on the road.  Part 4 in the series carries on from the magnificent Ait Ben Haddou exploring both the Dades Gorge and Todra Gorge.

Leaving Ait Ben Haddou we were caught in the mother of all whirlwinds. Everyone, locals and visitors alike hid their heads anyway and anywhere they could. Hugging the closest palm tree, I willed my face to disappear into it’s trunk. It is times like this, when your trusty travel scarf – a must in Morocco – comes in handy.

The whirlwind was a swift but crazy reminder that we were desert-bound. 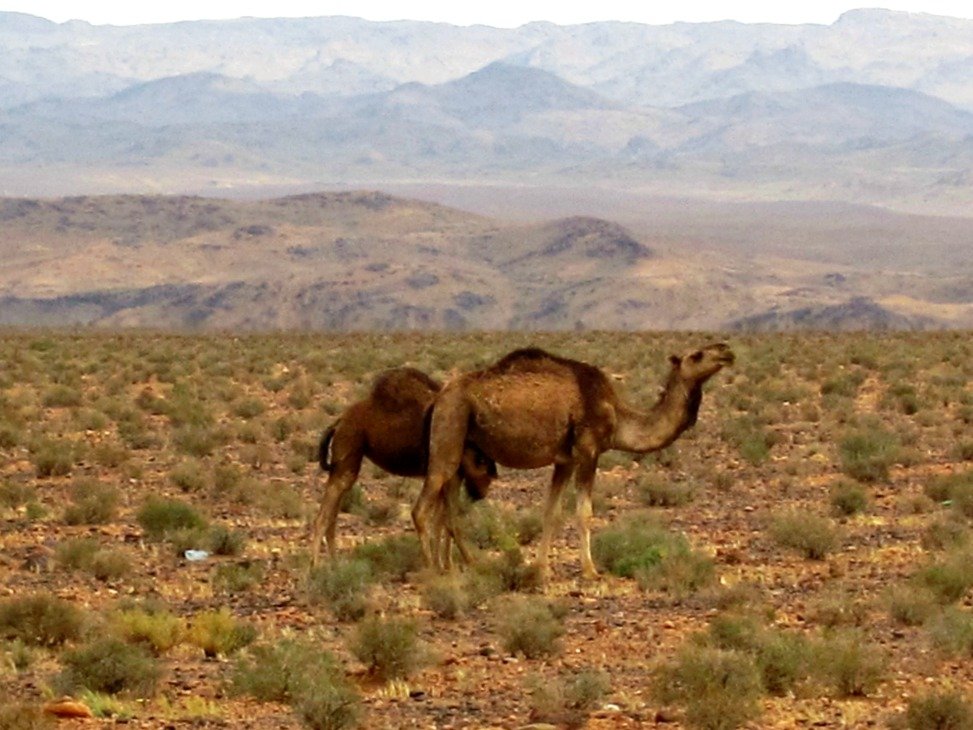 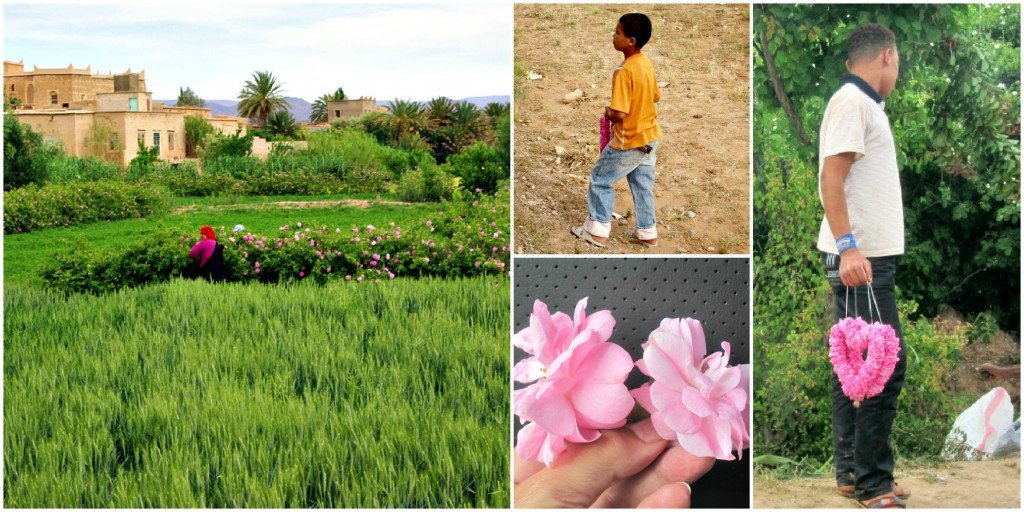 In the Valley of the Dades River, otherwise known as the Valley of Roses, women harvest tiny pink rose blooms early in the morning. Their sons sell them as heart-shaped garlands by the roadside and I wonder if the daughters or the whole family have the sweet-smelling job of threading them.

Farmed commercially, these roses are the major source of Moroccan rose water. 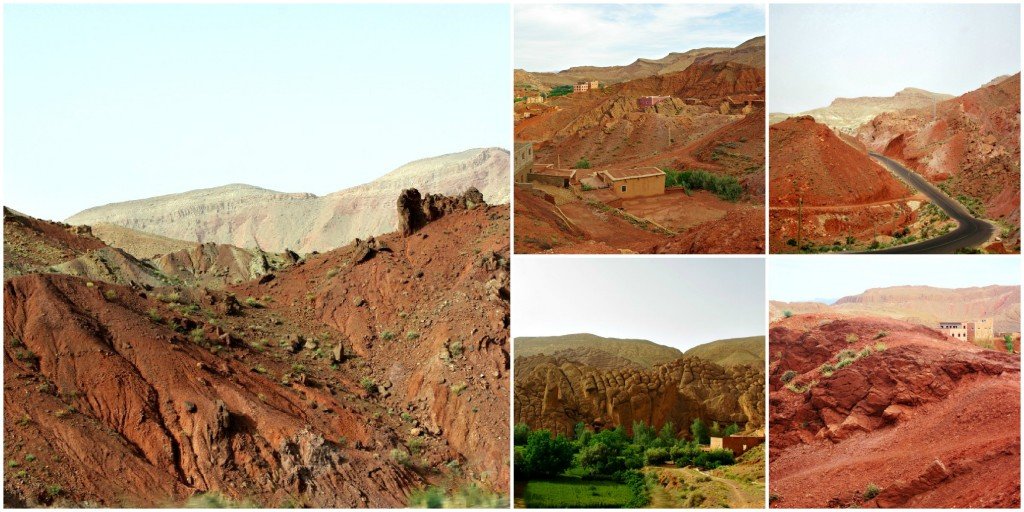 Having left the Dades river Valley behind we were on our way to the Dades Gorge, where over the centuries, the river has gouged it’s own niche between the Atlas and Anti-Atlas Mountains. We arrived at it’s spectacular red landscape and bulbous Monkey Finger rock formations, in the late afternoon.

Men in groups of two or three perched high up on the rocks lining the gorge road. The ambush-worthy scene was thankfully nothing of the sort. A few women were still hard at work in the fields but more were walking home carrying grass for the family’s animals.

Soon it seemed the whole population was taking a mass segregated stroll – groups of girls holding hands, boys walking or doubling on bicycles, women chatting in groups, or men sitting talking – no public mixing of the sexes here. 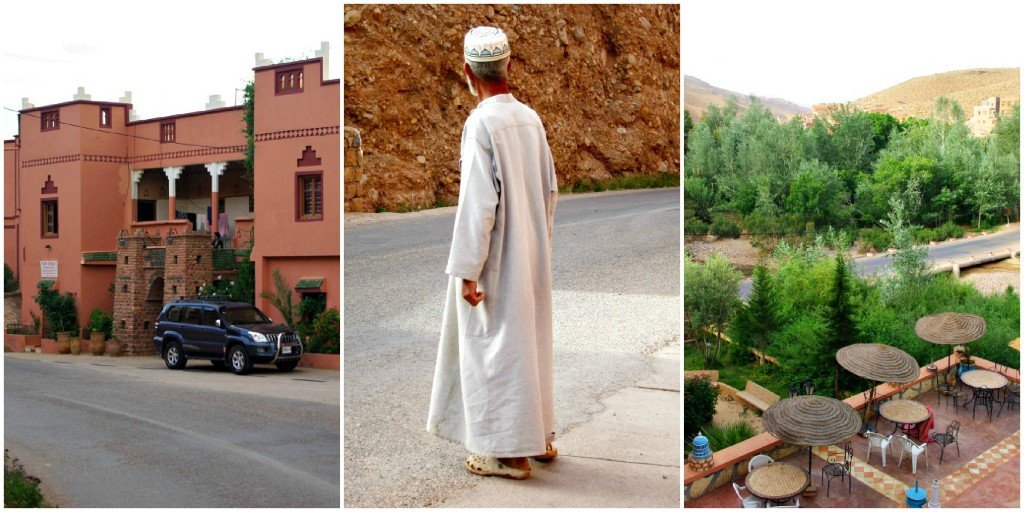 Our Dades Gorge hotel was Auberge des Gorges Ait Oudinar. It was a solid spacious place with warm furnishings reminiscent of an old-time hunting lodge, sans guns or antler trophies. There was a small internal garden near reception, and at the back a large riverside terrace.

Our balcony overlooked this and beyond to the fields and hills. It was a good spot to sit in the cool of morning and watch the valley come to life, while pigeons stole a breakfast of corn from the fields. At check-in the previous night our driver relayed to us that we would eat at 9 pm.

The dining room tables were arranged by vehicle groups at staggered time-slots. Even though we were the last table seated, there was plenty of food. Our table of three was served a shared chicken and vegetable tagine, with a welcome basket of bread and a pre-packaged fruit salad desert.

Because our tour was inclusive of accommodation, dinner and breakfast we weren’t offered choices here. The ensuite shower was sadly lacking in hot water and another in the group’s Air-Con was missing the remote and reception couldn’t find a replacement.

Things to know about the Dades Gorge

I could have stayed longer in this interesting gorge, but our plan was set. The cars were ready, the drivers were ready but one pesky passenger was absent. Quite some time later, after he was roused, fed and packed, we were once more on the road toward Erg Chebbi.

We hadn’t got far, when we rounded a corner and came to an abrupt halt. Nomads were shifting camp and their donkeys and camels swarmed our vehicles, so close that we could easily have touched them through the open windows. I suddenly felt more forgiving of the guy who was late.

We probably would have missed the nomads if we’d left on time!

Today was going to be exciting – I could feel it in my bones. 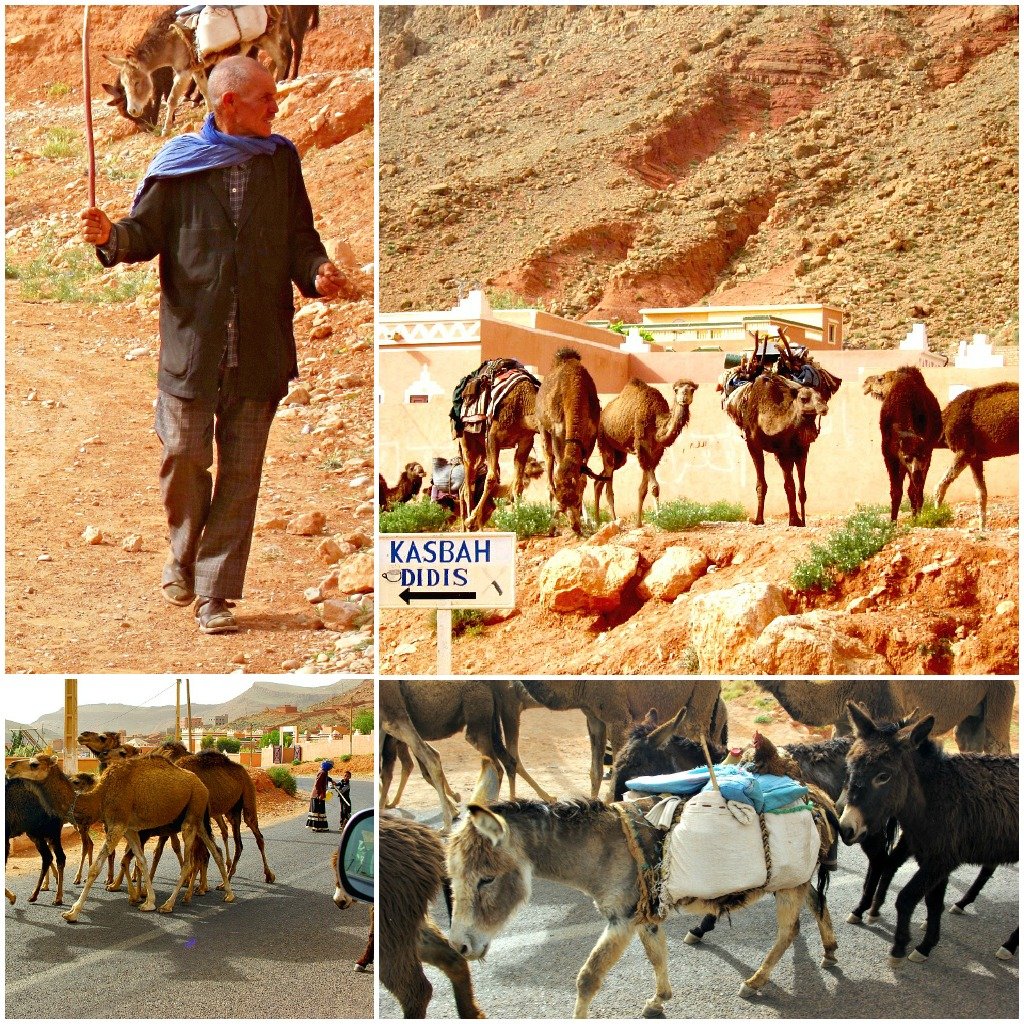 The road from Dades Gorge to the desert town of Merzouga and the dunes of Erg Chebbi was taking on a distinct persona. As the desert gates grew closer, our view was of a flat red expanse, occasional camels and the vague outline of distant mountains.

Haze had long since obscured the sun. The desert was lowering it’s veil.

But before the desert we had another gorge to visit. 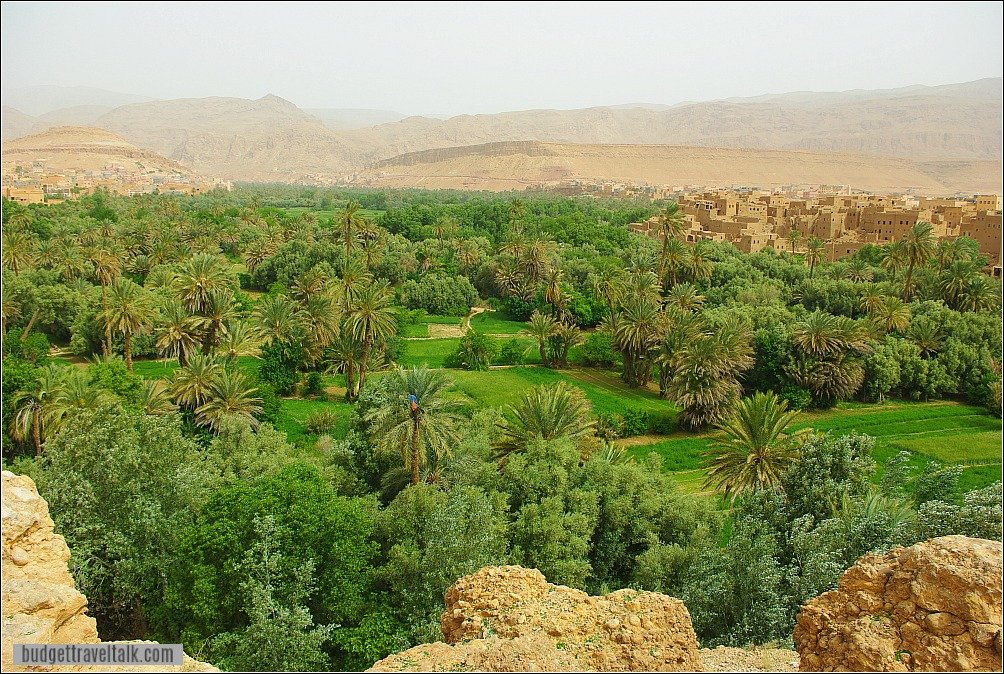 At the gorge entrance, a hill overlooks the palm filled Todra Valley as it stretches across to the town of Tinerhir. Each family is allocated a number of date palm trees for which they are responsible. Can you see the tree top worker?

The gorge itself, is a further 15km along the road. It is an incredible place with orange coloured canyon walls rising 160 m straight up. There is barely enough room at the base of the canyon, to hold both road and river.

The gorge walk dwarfs us on either side and is breathtaking. 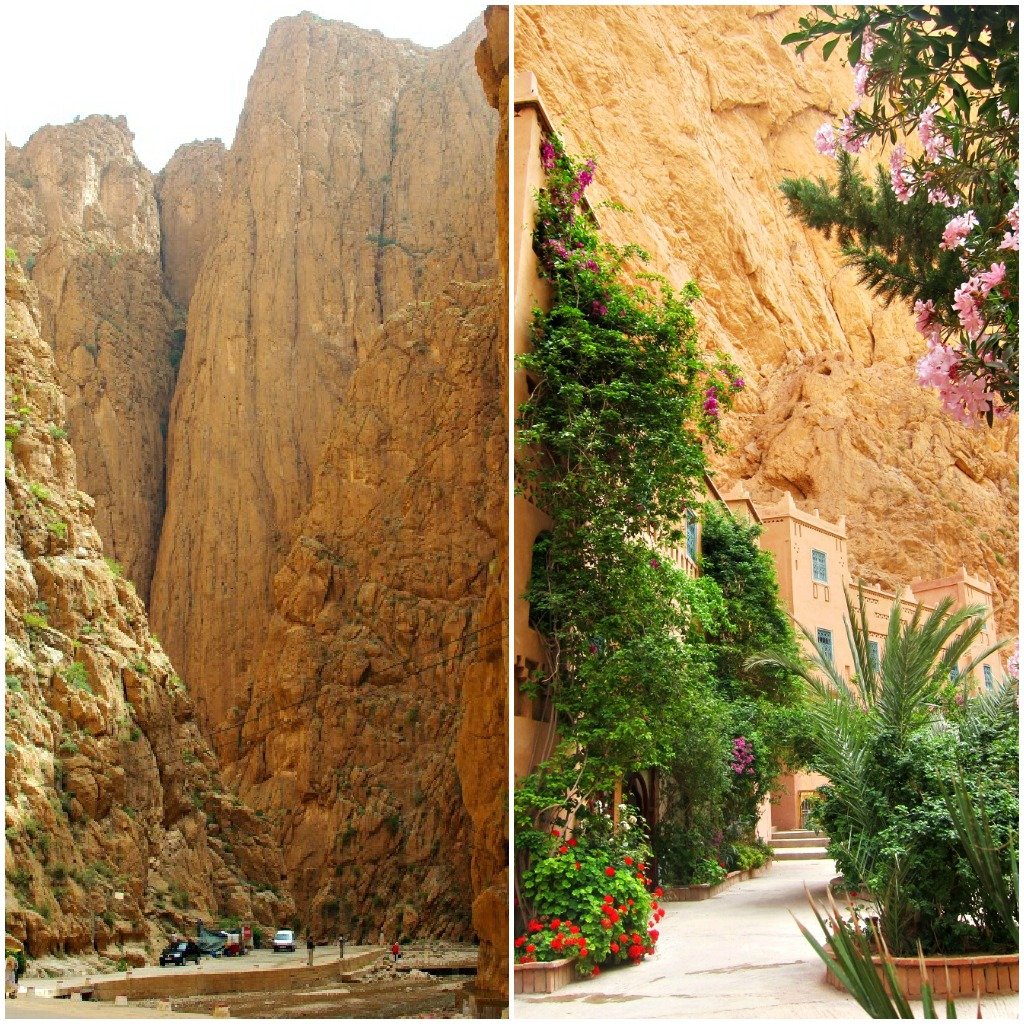 Todra Gorge climbing is popular with rock-climbers and there are more than 150 climbing routes pegged into the limestone canyon walls. 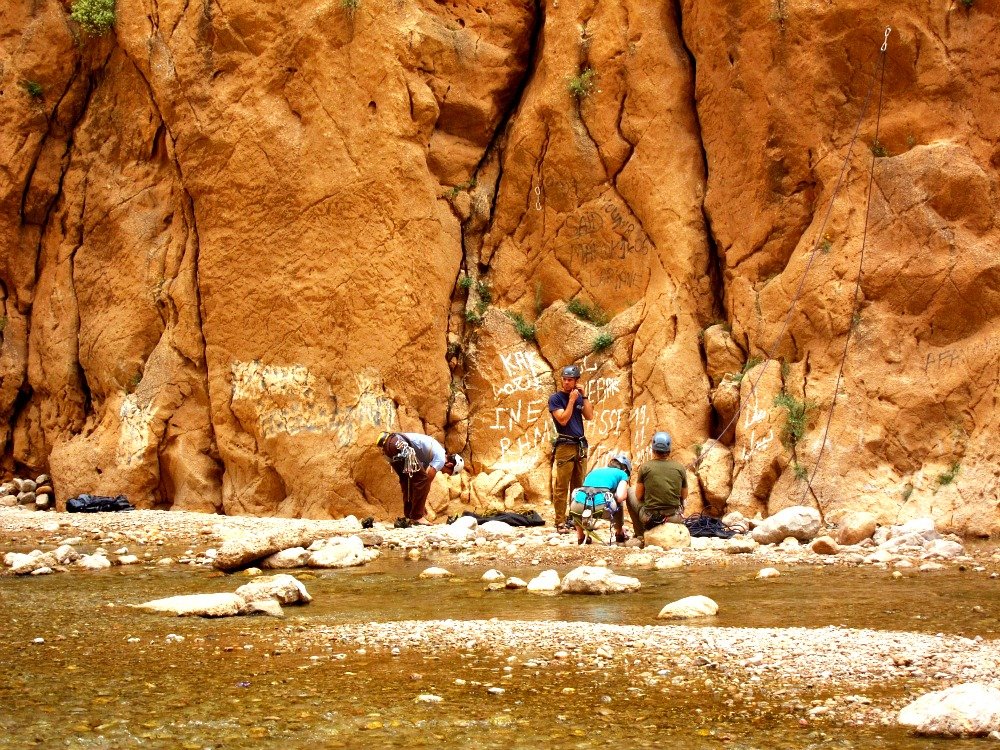 Locals who live nearby herd their animals through the gorge. This Berber or Amazigh woman was minding a flock of jet black goats. Having asked her permission I photographed her exactly how she was sitting. 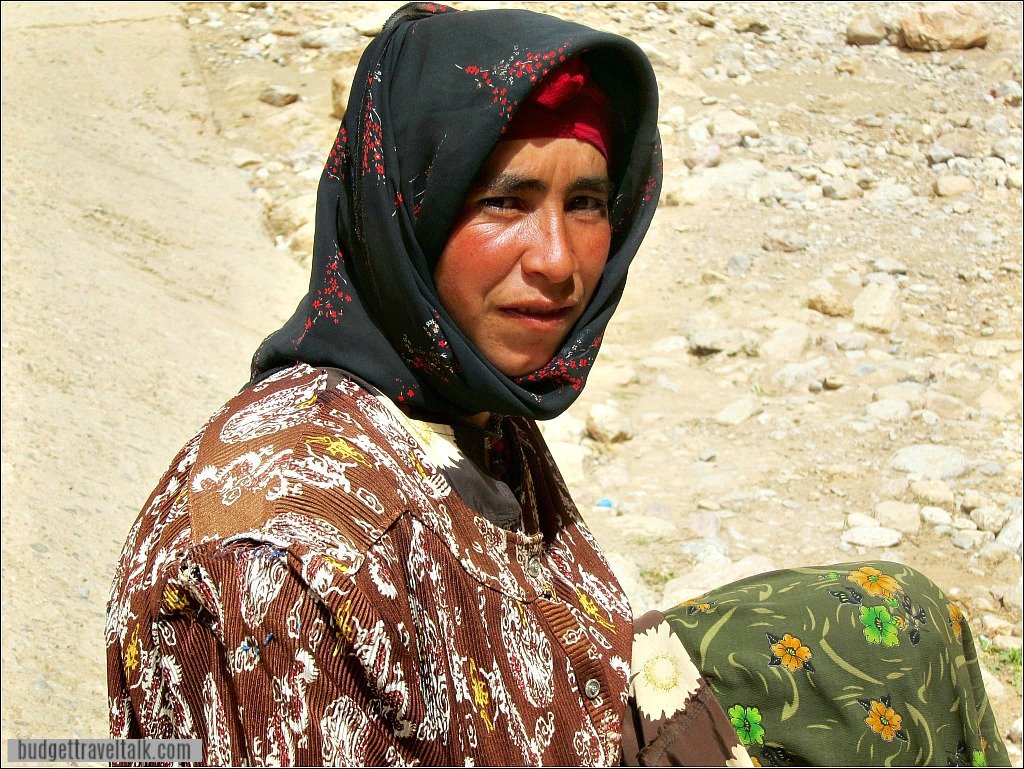 Seeing her image on the camera screen, she excitedly and repeatedly touched her face, pointing to the screen and looking questioningly at me. She was clearly astonished and I wondered if she had access to a mirror. 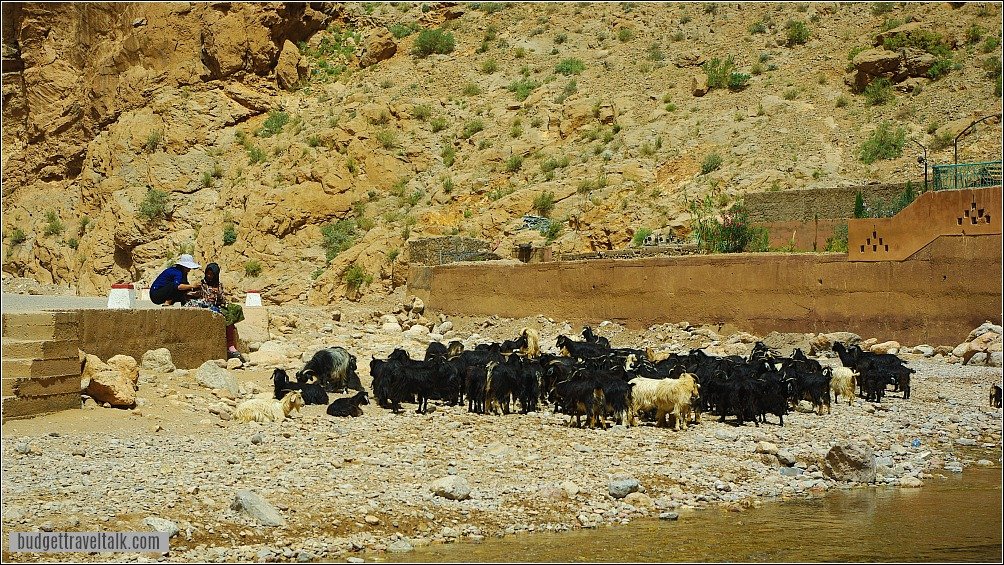 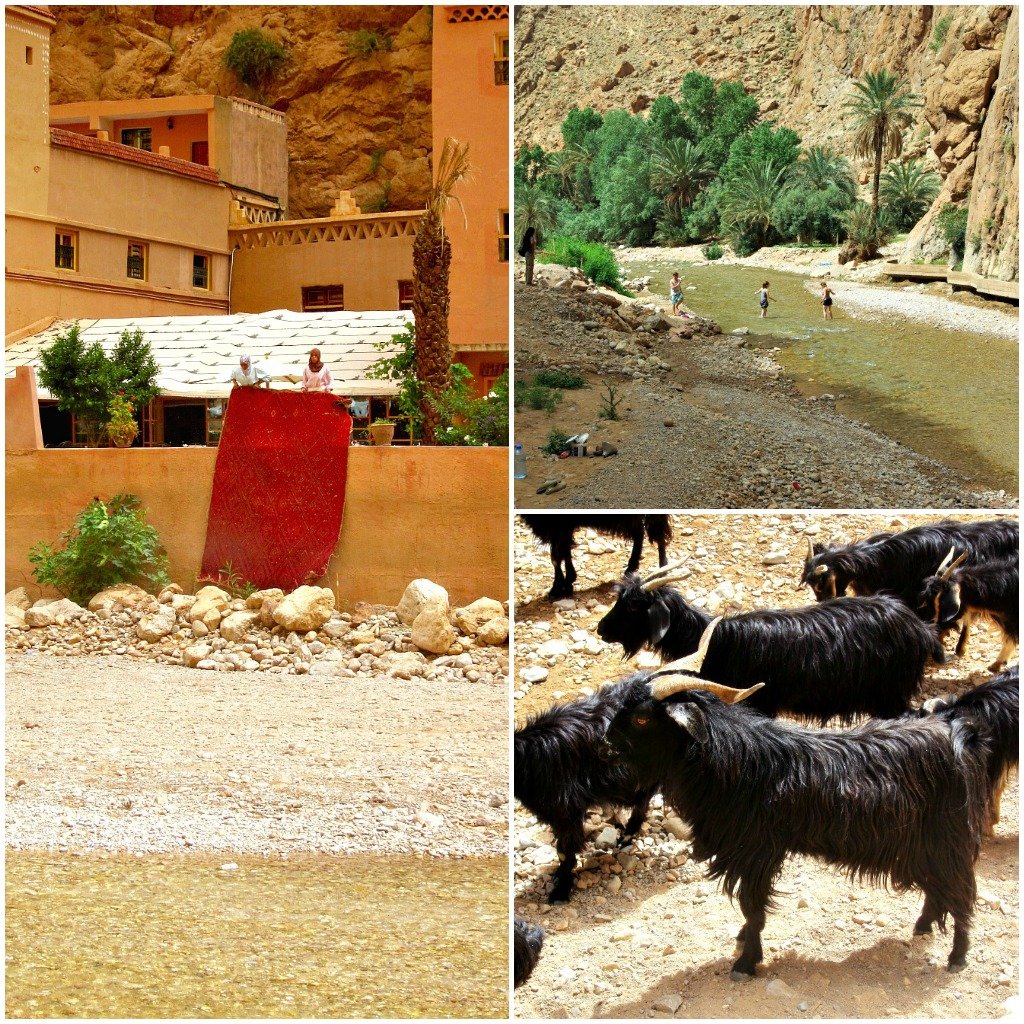 In mid to late May there was only one tour bus in the gorge, but it can be congested. Tours or car rentals are the only way of accessing the gorge. There are walks to the cliff tops where, depending on the time of year, nomads camp.

The road continues on ending at Imilchil, home of the annual betrothal festival in late September, where brides select their grooms.

The Dades and Todra Gorges are areas that I would like to revisit with our own vehicle.

There is only one post left in this Sahara Desert tour series. Next week we leave Todra Gorge and head for the grand finale – the camel trek into the dunes of Erg Chebbi.

This post forms part of Travel Photo Thursday over at  Budget Travelers Sandbox.  Come visit for inspiring travel photos from around the world.