In the late afternoon, we cruised through the empty streets of Merzouga, 560 km inland from Marrakech in Morocco.  Box like earthen houses lined the meagre streets that lead to our rendezvous point on the edge of the Erg Chebbi dunes.

The Dunes of Erg Chebbi. 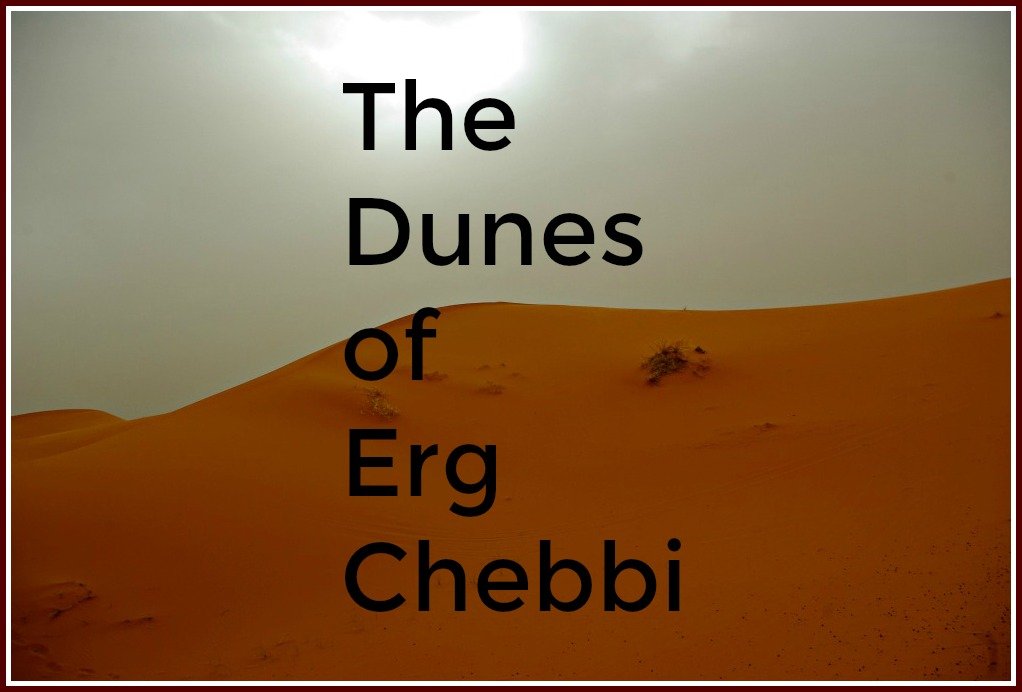 Waiting on the unexpectedly fine black soil were our guides and ready-to-go camels. 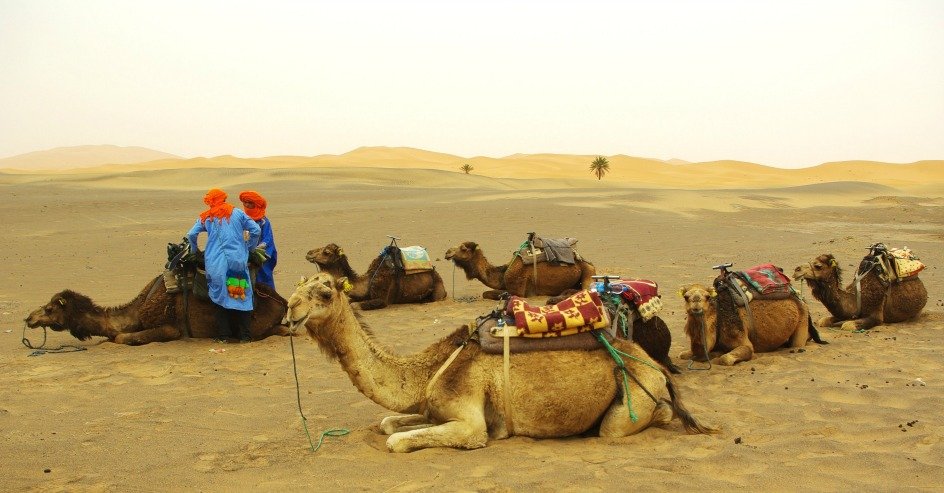 We had met up with the second 4WD in our group at a nearby service station for a toilet break and to BUY WATER to take into the desert.  Then it was all action as we met the desert guides, stowed our backpacks and water bottles and mounted the camels.  When the guides said the word, we leaned back in the saddle and one by one the camels rose. 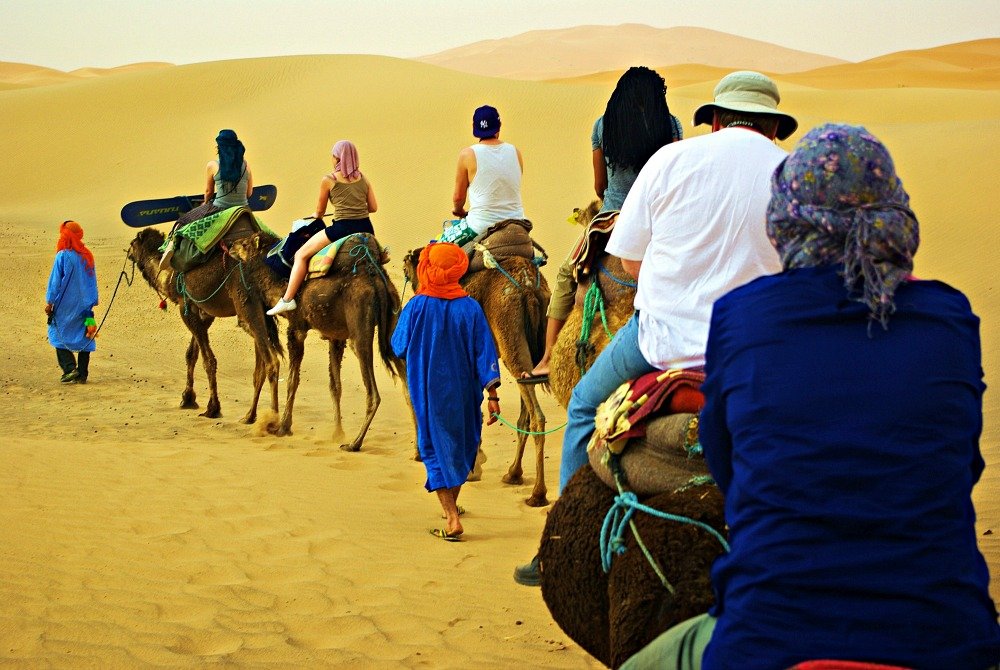 Although we moved slowly civilization was quick to disappear leaving us with the desert wind, sculpted dunes and an eerie quiet.  Scarcely broken by the rubbery feet of the camels, the quietness was everything.  Trying to make sense of the awkward motion of a camel, I admit to being awestruck of the whole situation. It was an incredible feeling to actually be riding camels in the Sahara after first dreaming of it as a teenager.

When I am asked what the desert is like, I answer without hesitation – Quiet. 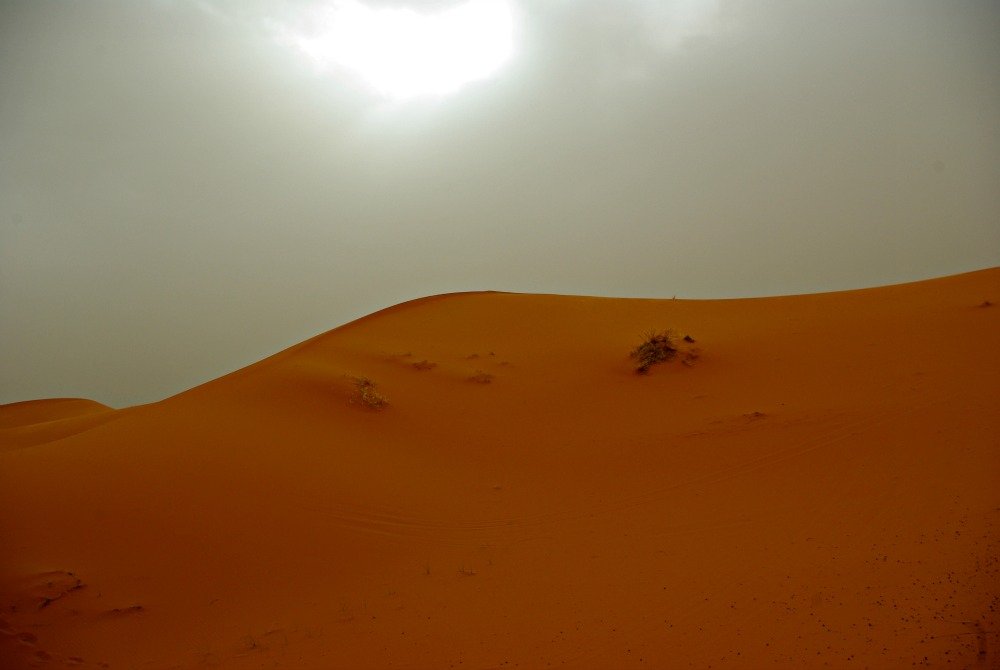 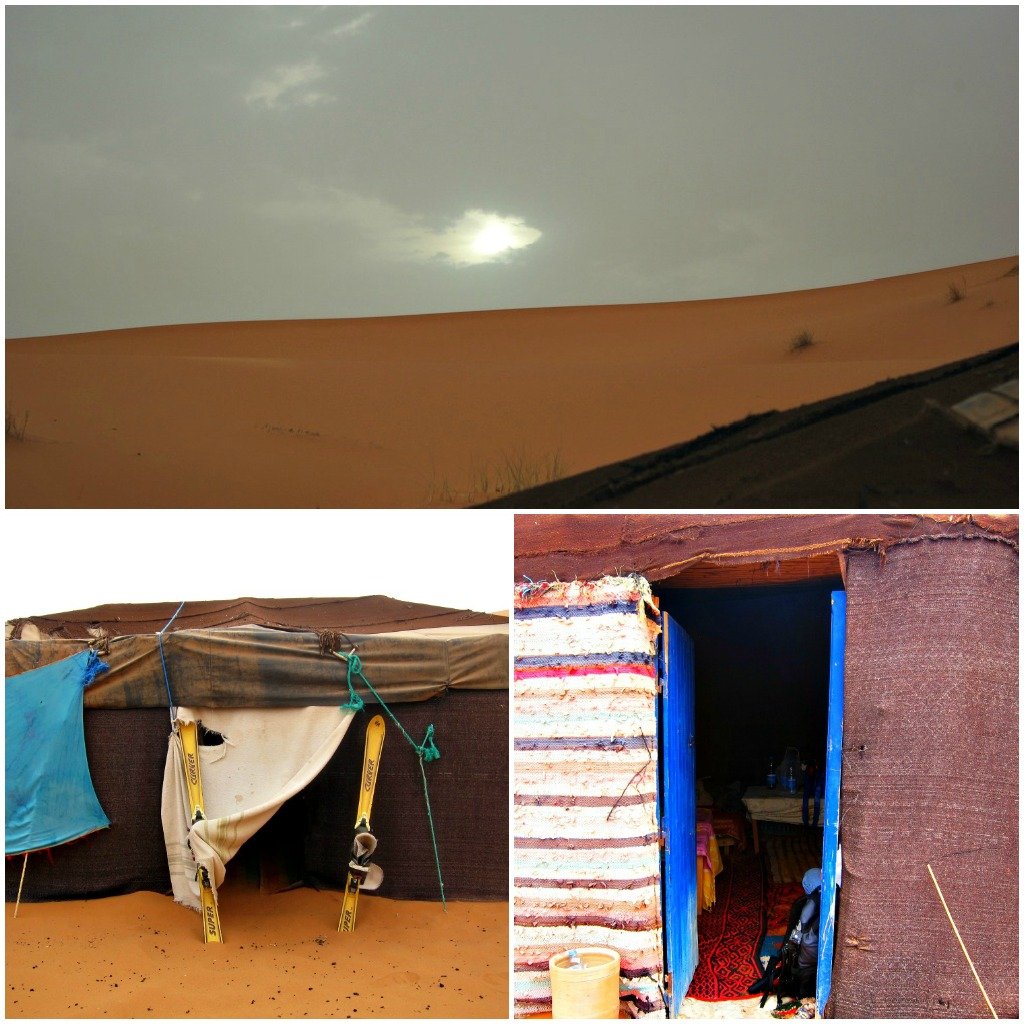 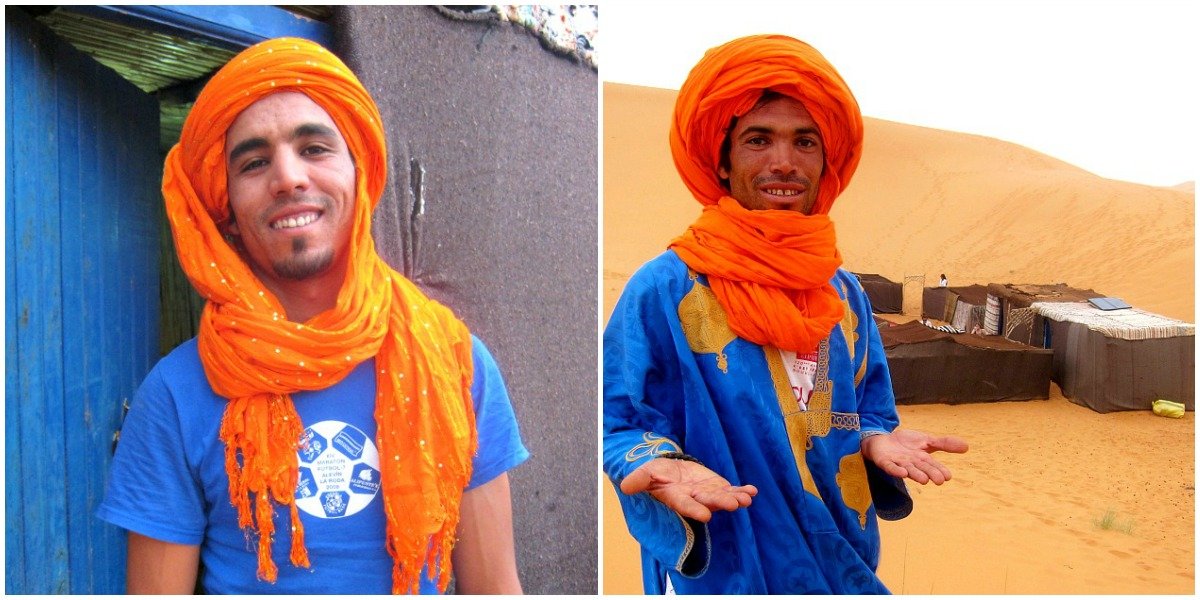 Not only did they lead the camels up and down, dune after dune, but they did it so effortlessly, and for two hours… two whole hours.  If you have ever struggled up a sand dune on foot you will appreciate this accomplishment.

Turbans discarded for virtual chef caps, they whipped up a chicken and vegetable tagine (the best we had in Morocco) and a huge vegetarian couscous. Afterward they became musicians and the sound of berber drumming blended seamlessly with the Saharan night. The floor was open for us to participate – but who knew that simple drumming could be so difficult?

While we sand-boarded down dunes or spectated, carpets and mattresses magically appeared in the compound’s communal area, as we had decided to spend the night under the clouds.

In short, our berber desert guides orchestrated the smooth running of camp life and made it an experience to remember.

This was one turbo charged camp cat.  He clung to the tent sides and Claw/Climbed his way upward, to where the traditional flat tops of the tents provided a fun place to trampoline and roll.  He played find the beetle in the sand,  and peek-a-boo in a plastic bag, and then lolled exhausted on the multi-coloured rug.

Although the kitten was the pet of one of the guides, he spent the night with our group, pouncing randomly on the unsuspecting and then snuggling up amongst the warily sleeping bodies.  The seven of us unanimously fell in love with him.

The weird sun-blocked sky had cheated us of a Sand Dune Sunrise, but we were awoken early nevertheless as we had a long drive ahead.  Following a breakfast punctuated with tales of the nocturnal antics of our kamakaze kitten, we were reacquainted with our rides.

I had used every muscle previously known, plus a few more, to stick on my camel the previous day and it was willpower not muscle power that kept me seated on the return trip.  It was pure bliss to dismount, thank “Herbie” aka “2612”, and climb gratefully into the soft padded seat of the Prado. 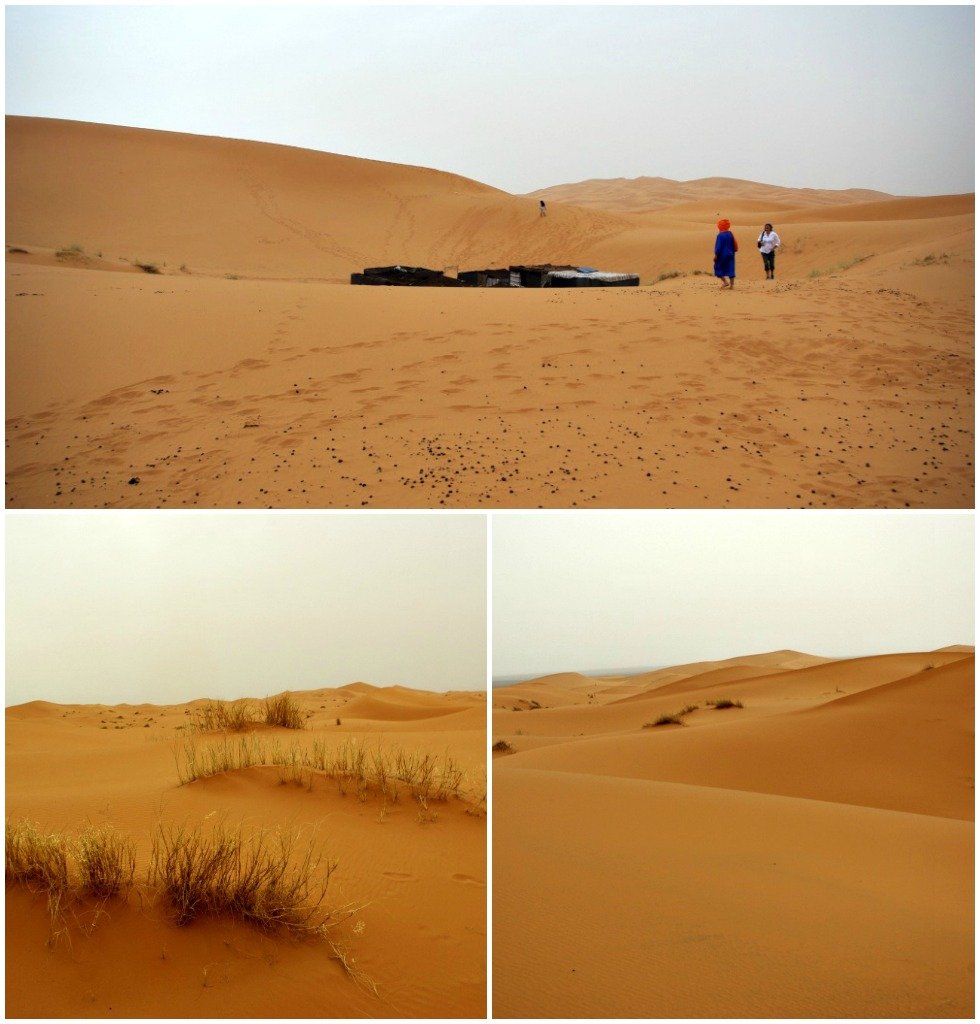 We had come to glimpse the Sahara

but had discovered so much more,

“It is the journey that matters, not the destination”

can not be true in this case however,

The Moroccan Sahara is a show-stopping destination. 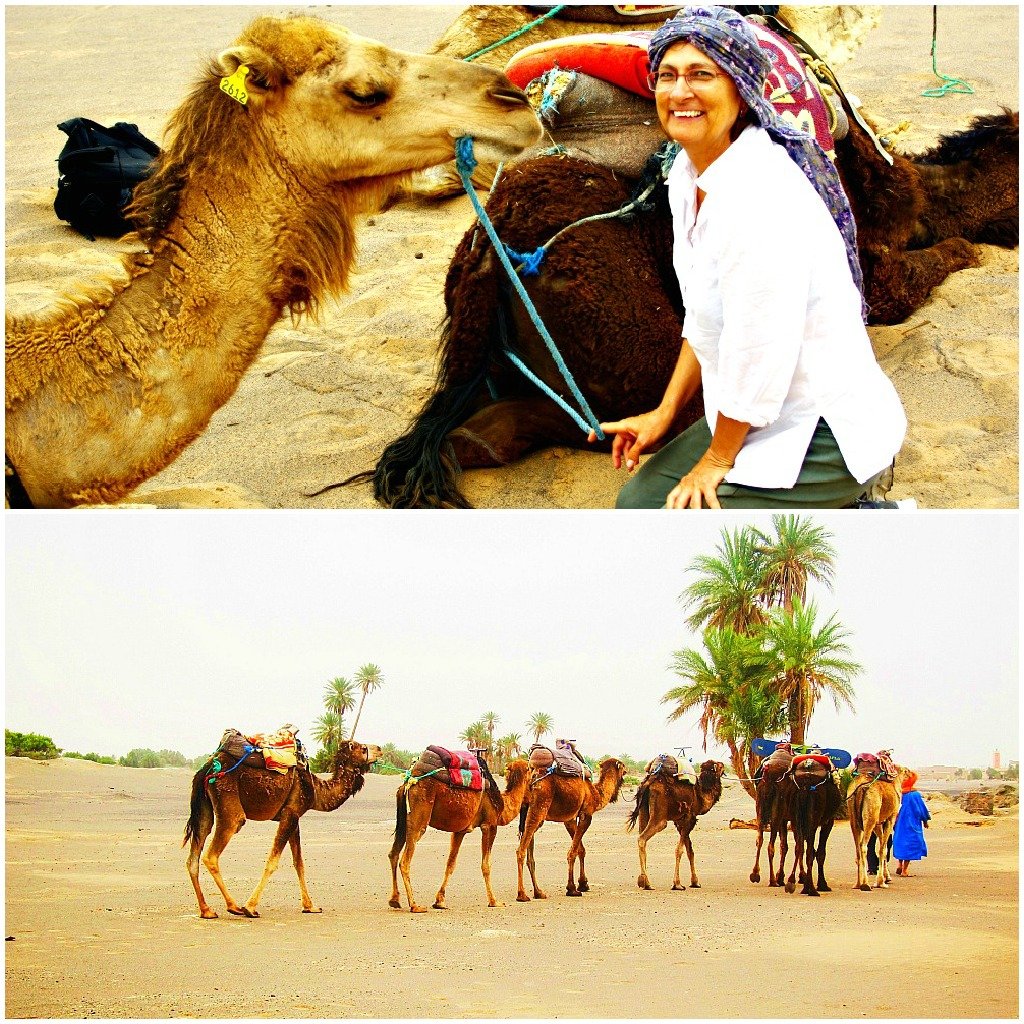 Things I discovered about Camels: 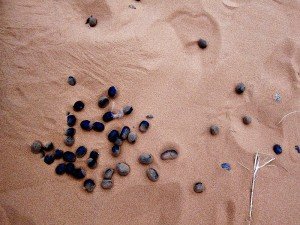 Our return journey to Marrakech was direct, stopping only for toilet and meal breaks.  We were delivered back to our hotels or in our case to JEMAA EL FNA Square as the lanes of the Medina did not accomodate motor vehicles.  The journey took approximately ten hours including  a very welcome joint lunch/debrief session with the guys in the other Prado.

Planning an Unrushed Week in Morocco

Our week’s stay in Morocco provided a neat cross section of the Country, from ESAOUIRA on the coast, to Marrakech 200 km inland, and this 4WD tour from Marrakech to the Dunes of Erg Chebbi.  The formula provided an unrushed way of experiencing a relaxing port/beach town, the craziness of Marrakech, and the diverse country and sights of the Atlas Mountains and desert lands all within one week. We organized all the accommodation and transport ourselves on the back of an extremely cheap Ryan Air fare from Seville in Spain, flying out of Marrakech to Lisbon, Portugal.

This desert tour fitted our plans well. Having said that with more time and with this experience under our belts we would hire a car and drive ourselves next time.

Things to know before you go:

Merzouga is situated on the edge of the Erg Chebbi Sand Dunes.  The Dunes are 50 km long, 5km wide and up to 350 m high.

CAMEL TREKKING was the name of the company we used.

Two days to get to Merzouga and one day to return to Marrakech.

Cost included two dinners, two breakfasts, two night’s accommodation – one in a hotel and one in the desert camp.

Budget Tip – The lunch at Ait Ben Haddou was quite expensive by Moroccan standards (10AUD) and was huge.  I could barely eat half of mine and would suggest sharing.

We did tip the driver and desert guides.  (Own discretion).

If I was wanting to go to the desert for the first time and only had three days I would happily use this tour company again.

Head on over to Budget Travelers Sandbox for the photographic delights of TRAVEL PHOTO THURSDAY.

Previous Posts on this Journey

Marrakech to the Dunes of Erg Chebbi Part 4

Marrakech to the Dunes of Erg Chebbi Part 3

Marrakech to the Dunes of Erg Chebbi Part 2

Marrakech to the Dunes of Erg Chebbi Part 1