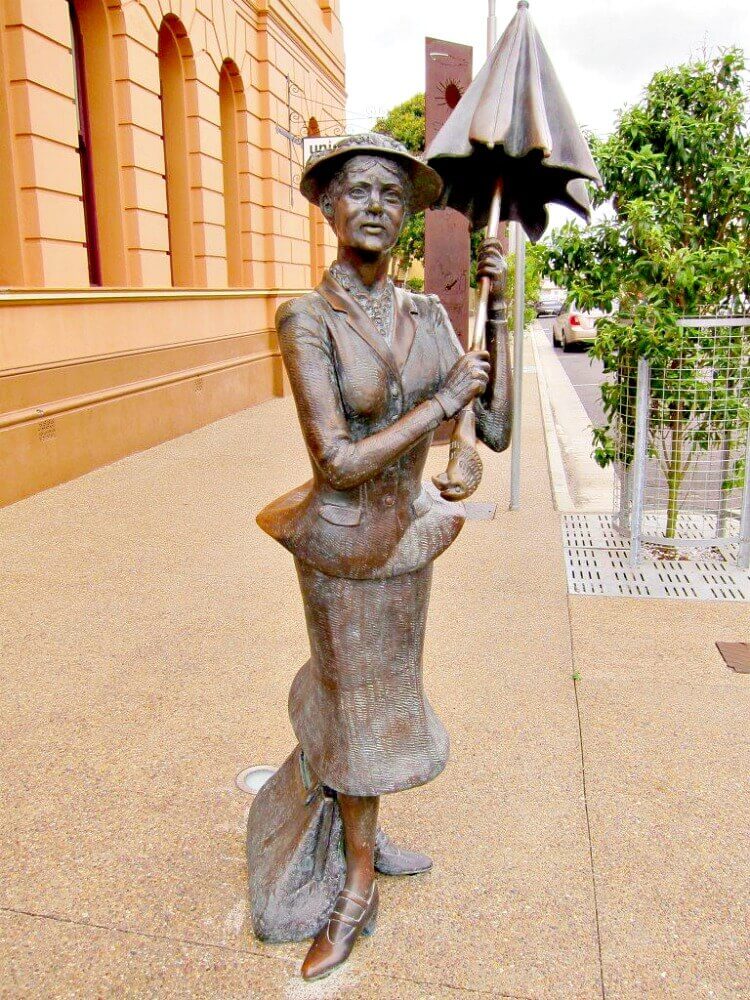 Whenever a new stage show version of Mary Poppins is released, people remember the Australian town of Maryborough, because the author of the Mary Poppins books was born there. As a result, Maryborough has an unusual Queensland Attraction in the form of a life sized bronze statue of Mary, standing right in the middle of the footpath with her trusty umbrella poised for action.

In 1899 Helen Lyndon Goff was born above a bank at the corner of Richmond and Kent Street,  where her father was bank manager.

Today there is a bronze statue of the Nanny from Mary Poppins on the footpath near the bank.  It is not fashioned on the Disney character but on the one from Helen’s books and was erected in 2005. It is a little known Queensland attraction, but one worth investigating if you are in the area.

Helen chose Pamela Travers as her writing name in the early 1920’s.  There are in fact 8 books in the series and Walt Disney was after the movie rights for them from 1940’s, but didn’t  get them until 1961.  The movie based on her books won 8 Oscars so he was right to persist!

Helen died aged 1996 aged 96, but there is a group who remembers her, called The Proud Marys, an international association for women whose name contains Mary or a derivative thereof.

Proud Mary members were the driving force behind the erection of the  Mary Poppins statue.

Having never visited Maryborough before, I was impressed by the amount of historical buildings and how well preserved they are.  If you miss out on the free walking tour that starts at 9am Monday to Saturday from the information centre at City Hall, collect a do it yourself walking tour pamphlet.  It’s loaded with information on the 46 buildings listed.

All the buildings are all within a few blocks of the Mary River so the walk doesn’t take long.

While walking, check out the innovative business names around town, making use of the Mary Poppins theme.

Also take a look at the Bauer and Wiles memorial fountain behind City Hall commemorating the two nurses who died after treating victims  of Australia’s only pneumonic plague outbreak.  They volunteered for the job – nurses amazing people.