“It sure feels like labour day”, I muttered to myself as I dragged aching limbs skywards in the Andalucian Hills.

I do not like walking/hiking uphill!  There I’ve said it.  It’s a shame I know.

Anyway, what is the difference between a hike and a walk?

Some say hiking is defined as off-road walking, in which case our descent into and climb out of Moclin Gorge was definitely the former.

There were lots of tracks on the same level as our house-sit in the mountains at Moclin – ones that our borrowed dog Lulu and I investigated energetically three times each day – and then there was the Gorge.  Tajos del no Velillos that is.  It had to be done – and minus Lulu.

Not that I had a problem with walking down into the gorge, or up out of the gorge for that matter.  But just when my body thought it had finished, I realised I had completely forgotten about the climb from the top of the gorge back to Moclin on the mountain above. You know what it is like when you are convinced that your destination is 5 minutes away only to find out it is actually 30 minutes away?  Best that we leave it at that.

Moclin was not called the Shield of Granada without reason. There was/is a direct line of sight from The Alhambra on al-Sabika hill in Granada to the castle fortification at Moclin, which stands at over 3000 ft above sea level. Moclin’s castle was the last line of protection – a shield for Granada – a position it held until 1486 when Granada was taken by the Catholic King Ferdinand and Queen Isabella.

Yes our adopted village was responsible for ending the last Islamic State in Spain.

We left on our hike at 10 a.m. May 1st 2012 – Labour Day – a holiday in Spain as it was in Australia.  Along the way we stopped to admire the stone cortijo with it’s charming fence line, the hillside vista far above the clouds and the poppies that waved their cheery heads above the grasses.  We even popped our heads into a tiny but beautifully maintained cave church along the route. 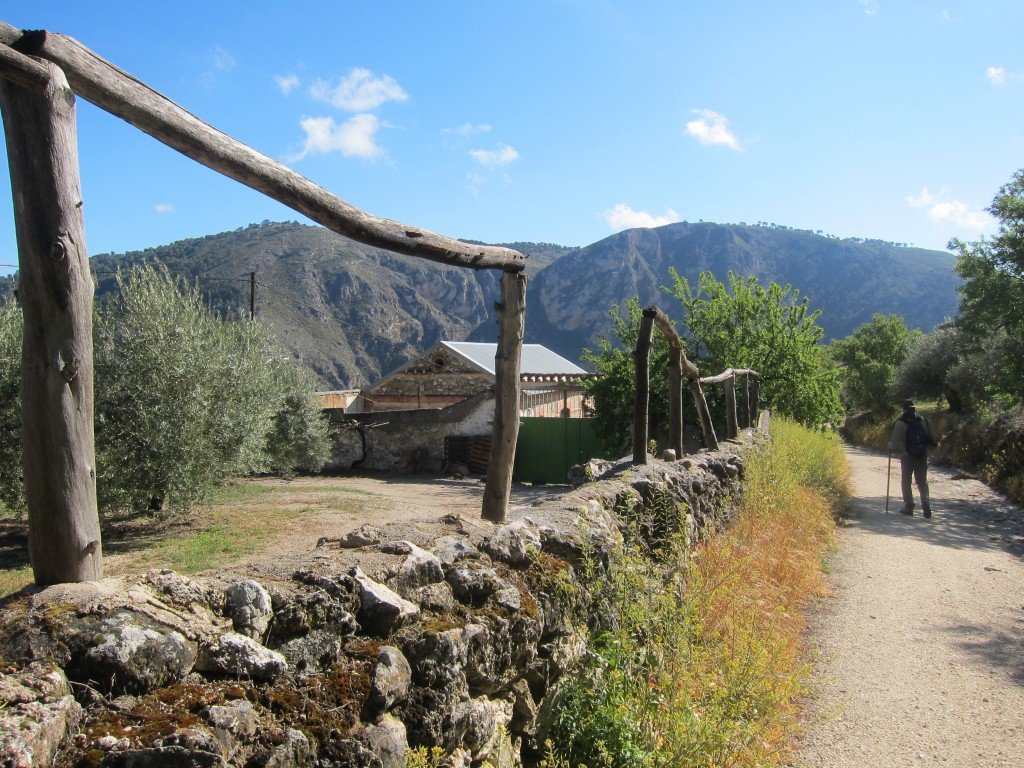 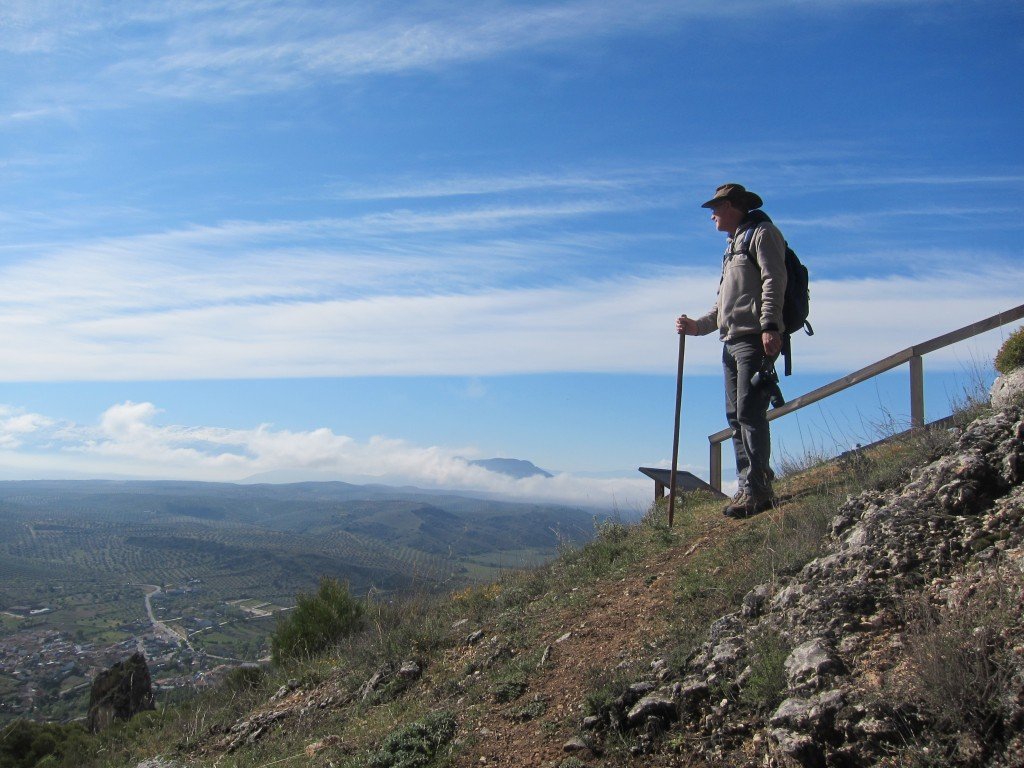 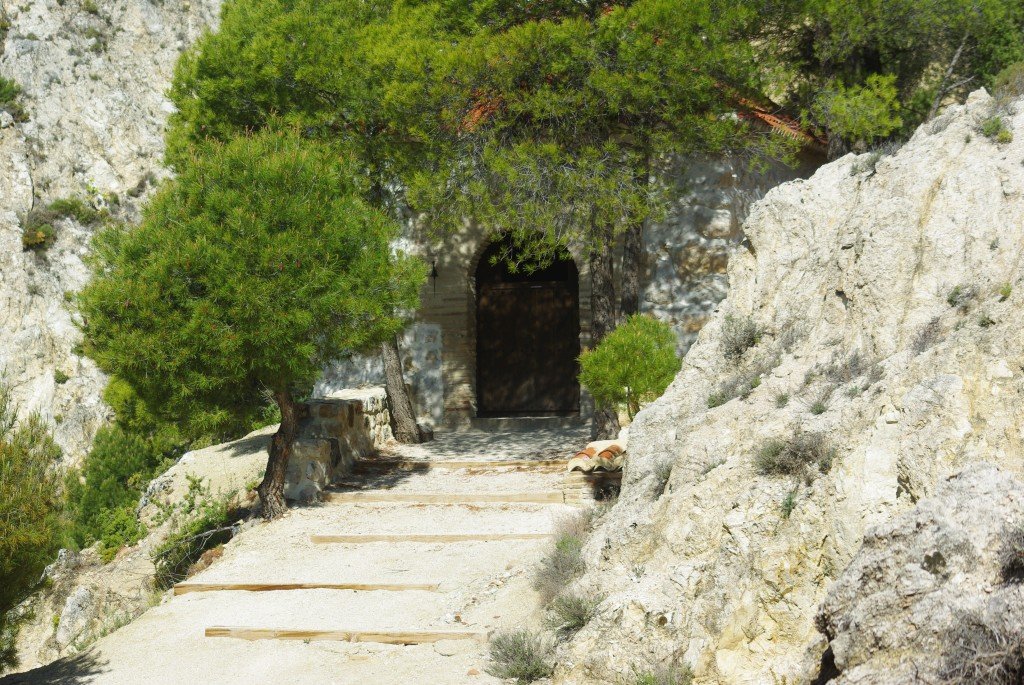 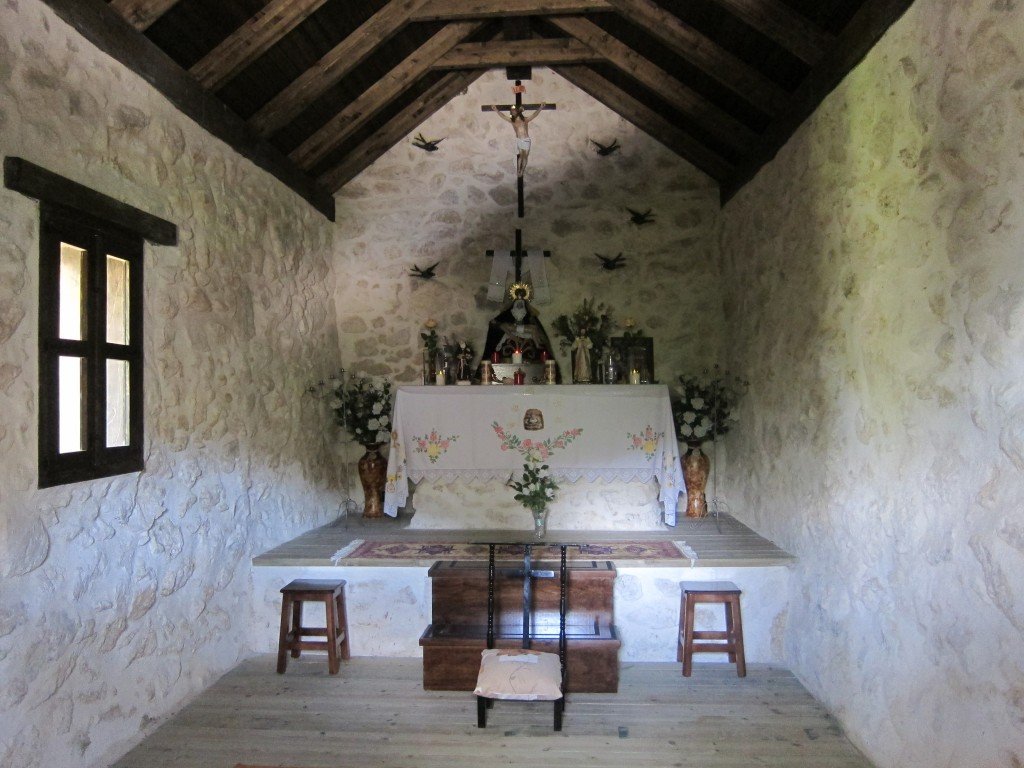 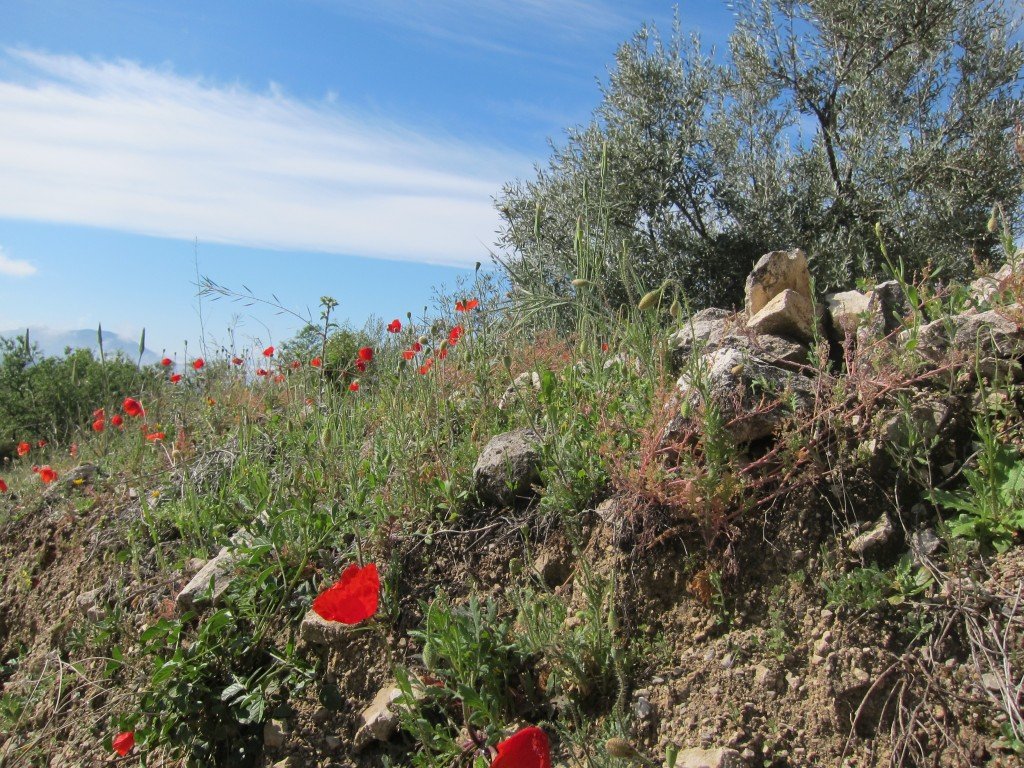 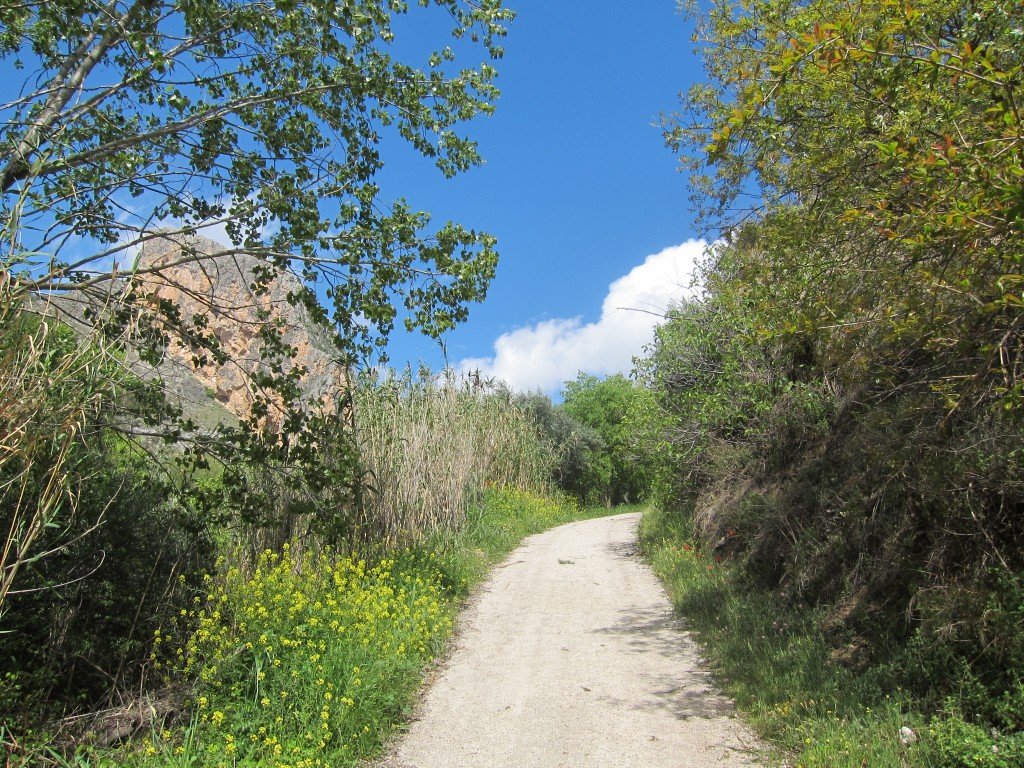 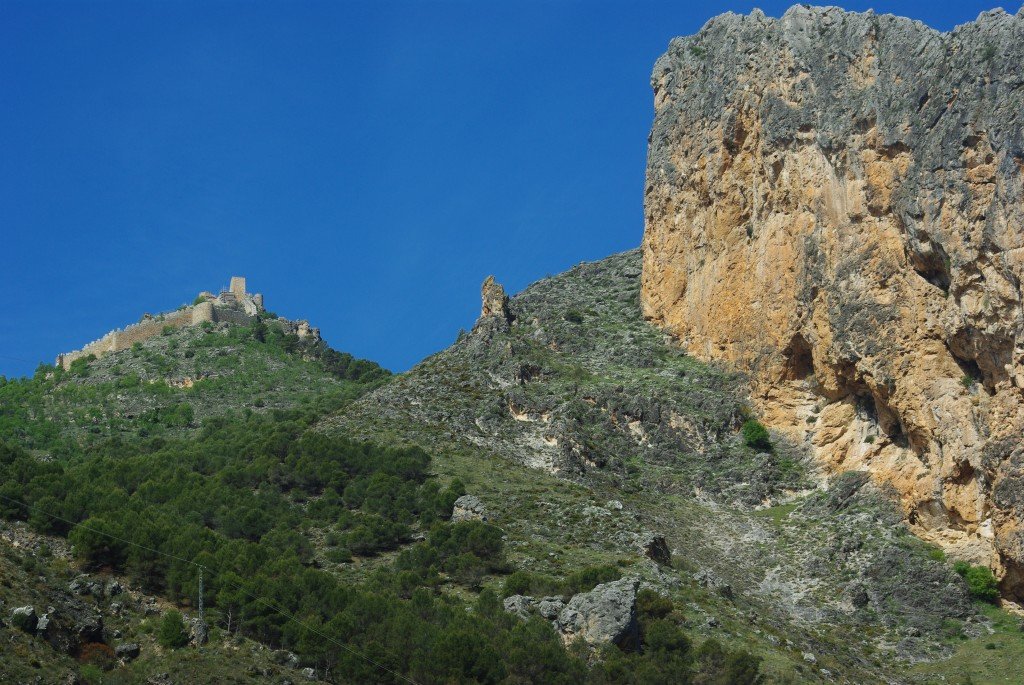 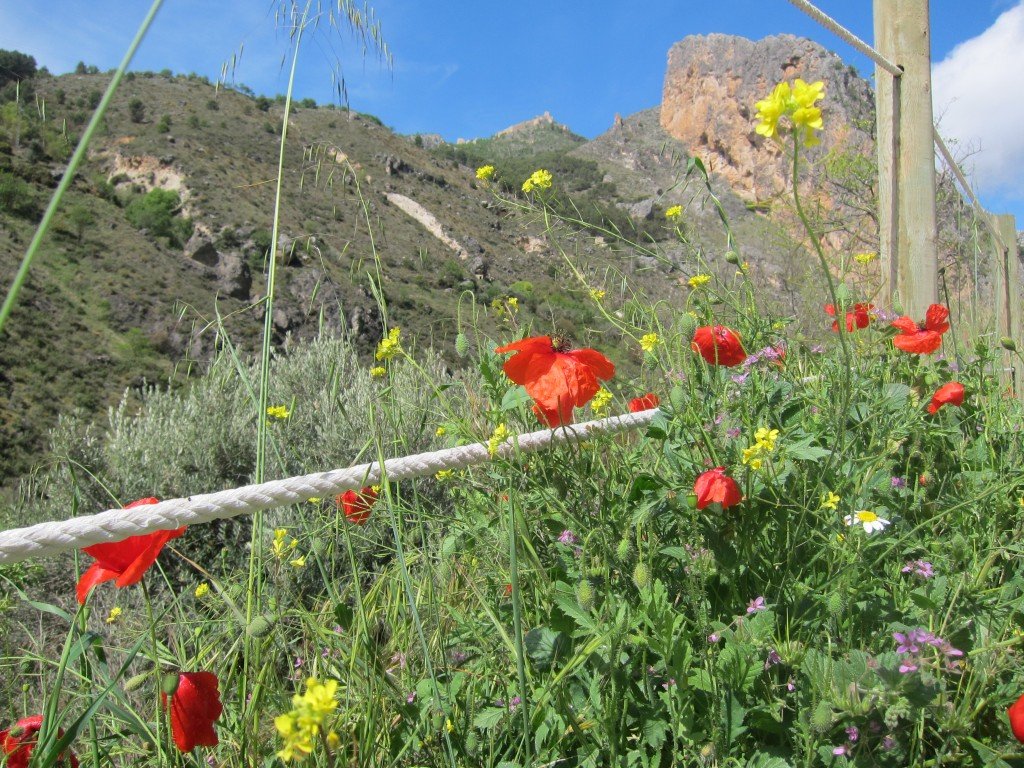 I’ve spared you all of those plummeting gorge shots.  I’m thoughtful in that way.

The Velillos River was quite small and muddy looking when we were there, with an old hydroelectricity plant on the banks and olive trees growing precariously on the hillsides.

There was time for us to enjoy what I considered the best part of the hike.  Time to sit by the stream on a fallen tree; time to catch our breath deplete our water bottles and eat a pre-prepared roll; time to try and stop grinning crazily at each other. It was one of those experiences that you hope you will never forget.

Believe it or not, the crazy looking contraption in the photo below actually worked.  A farmer used it to tend his trees.  Across the gorge we could just make out the figure of a man, bucket in hand, foraging for herbs on the steep slope.  At a distance were two horses inching there way along self made and unseen tracks.  I wondered if they were grazing the same herbs that the man was gathering. 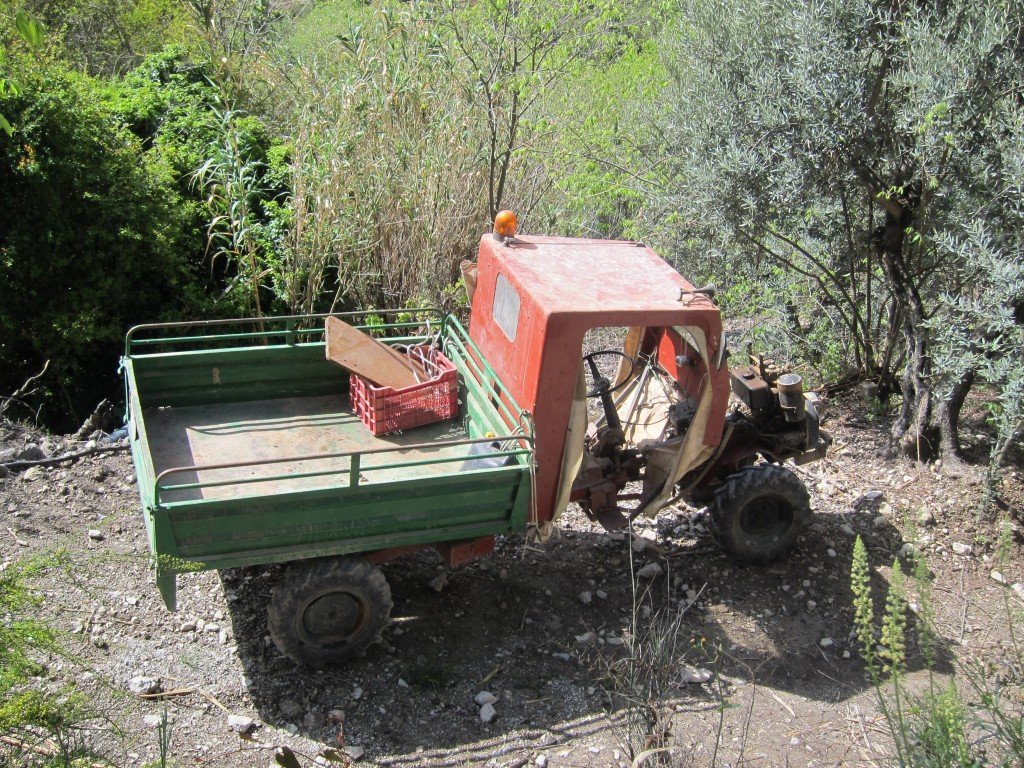 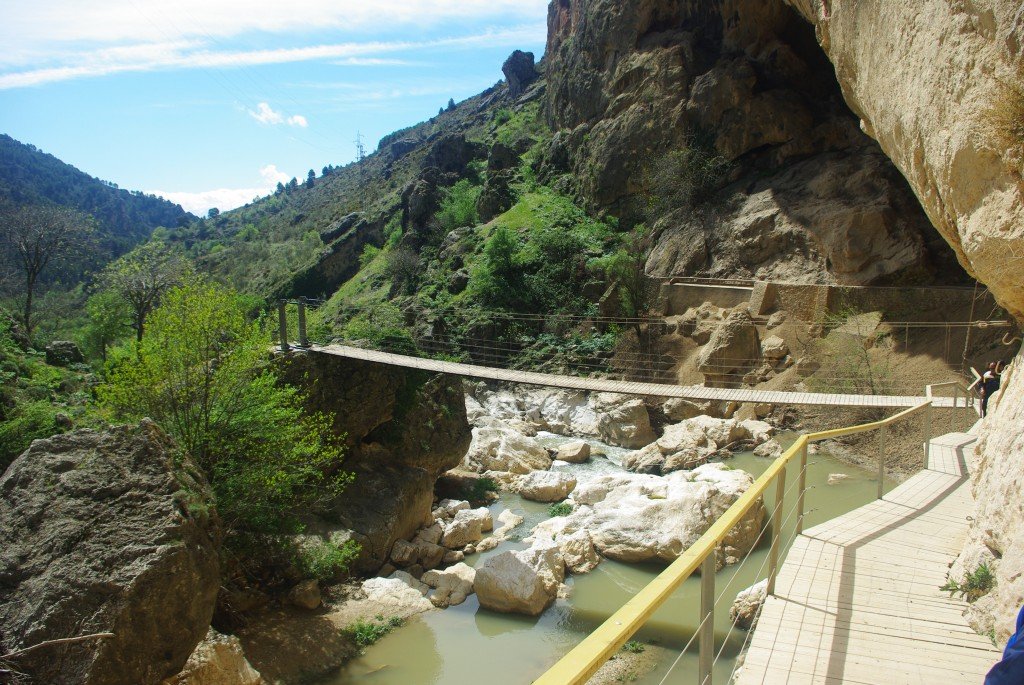 Flowers grew in clumps from the cliff face, no doubt fertilised by the rich droppings from birds nesting in the walls. 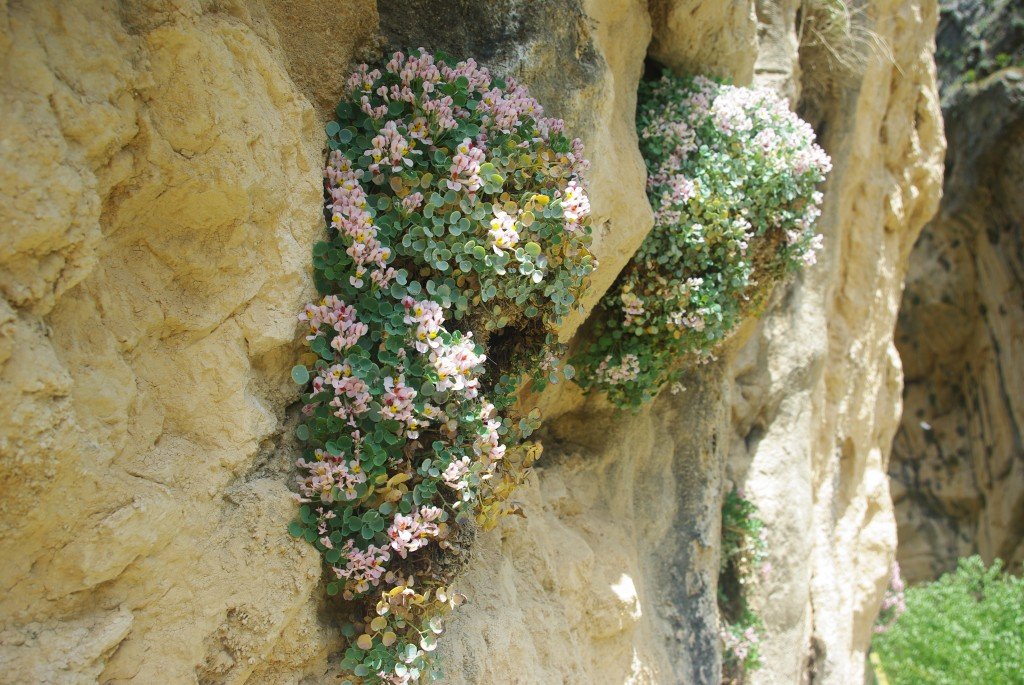 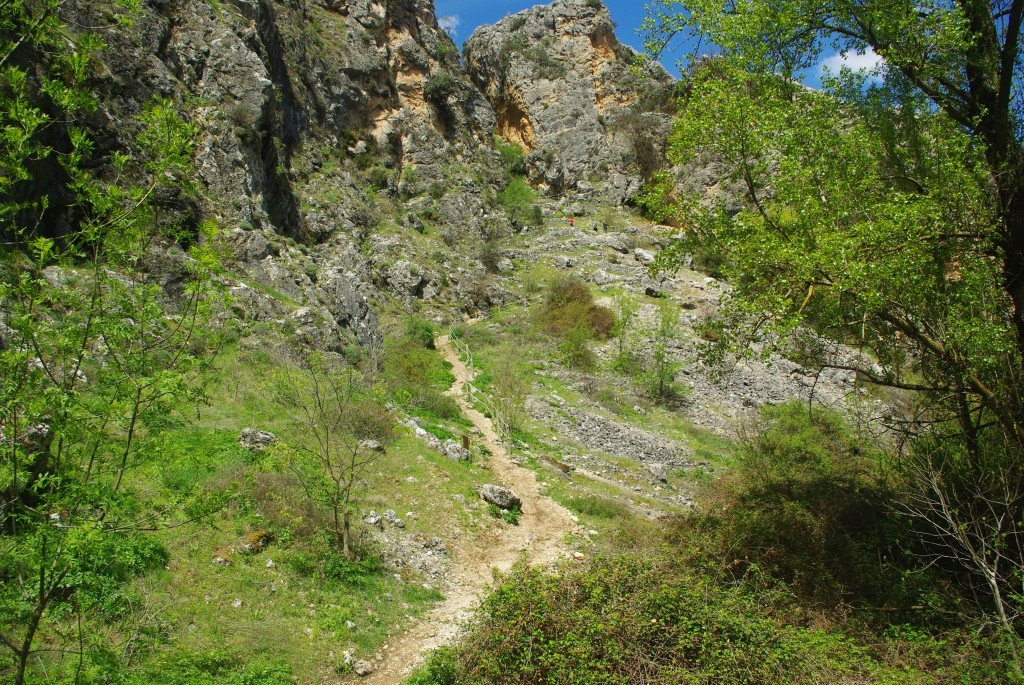 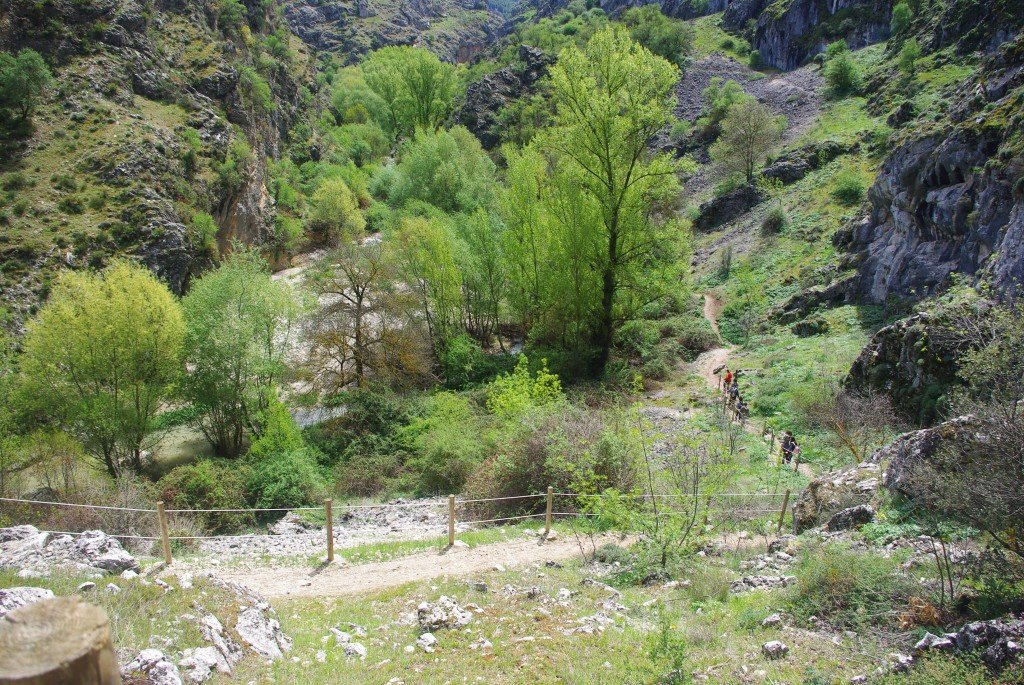 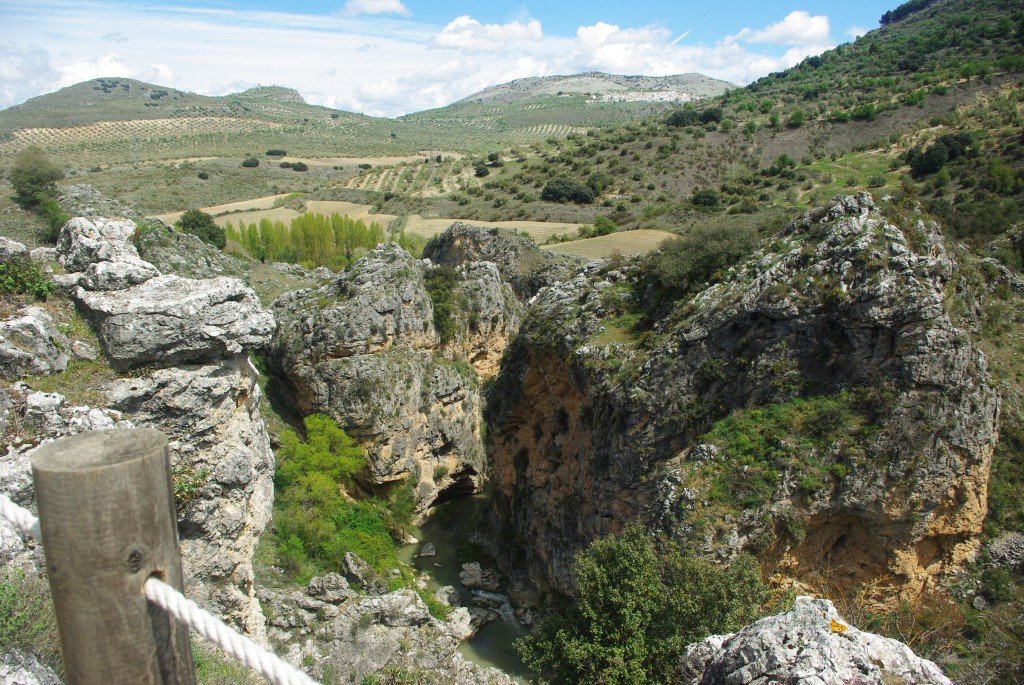 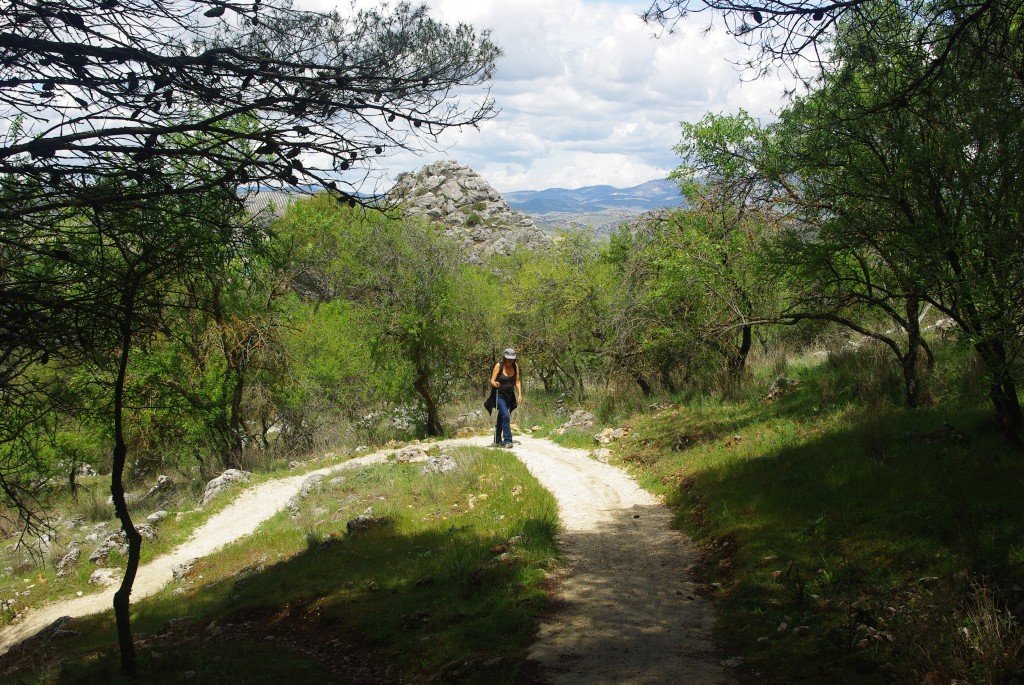 Keeping one eye on the Castle and one on the track (Lulu and I had met a snake on a different track the day before) I was taken completely by surprise when two Spanish Cowboys rode downhill toward us at what seemed like a gallop, but was most likely not.  Being passed by two sweating snorting horses on the (by then) narrow hill track, whilst we were insignificantly on foot, was quite  exciting.

The best thing about eventually reaching Moclin was that our route led directly in front of the village bar. I know!

Families were celebrating the holiday on the terrace – the overflow of patrons being seated at long tables in the sunny square out front.

It would have been rude not to join in – wild horses could not have stopped me.

With drinks and Calamari ordered, aching leg muscles were quickly forgotten. When we found another family who had also just completed the hike, notes were compared and moments (the rope bridge and the horses) relived and shared.

The Moclin tourist information pamphlet refers to this four hour hike as a stroll.  Maybe Google Translate has something to answer for on that front.

We really celebrated labouring on this particular Labour Day, and in retrospect even I admit that the hiking was fun!

Things to Know before you go.

Moclin is 33km north-west of Granada in Andalucia, Spain.  There is a bus service from Granada to Moclin.

Moclin is the name of the village that administrates the seven villages of Moclin Municipality.

Start hiking from Calle Esperanza in Moclin in the direction of Olivares.  Turn left before reaching Olivares and follow the path down into the gorge.  The path will lead you up and out of the gorge.