The Montenegrin tourist capital of Budva is a tempting 23 km south of the Bay of Kotor. Budva has a big reputation as a beach holiday destination and we decided to check out the city beach of Slovenska, to see what all the fuss was about. 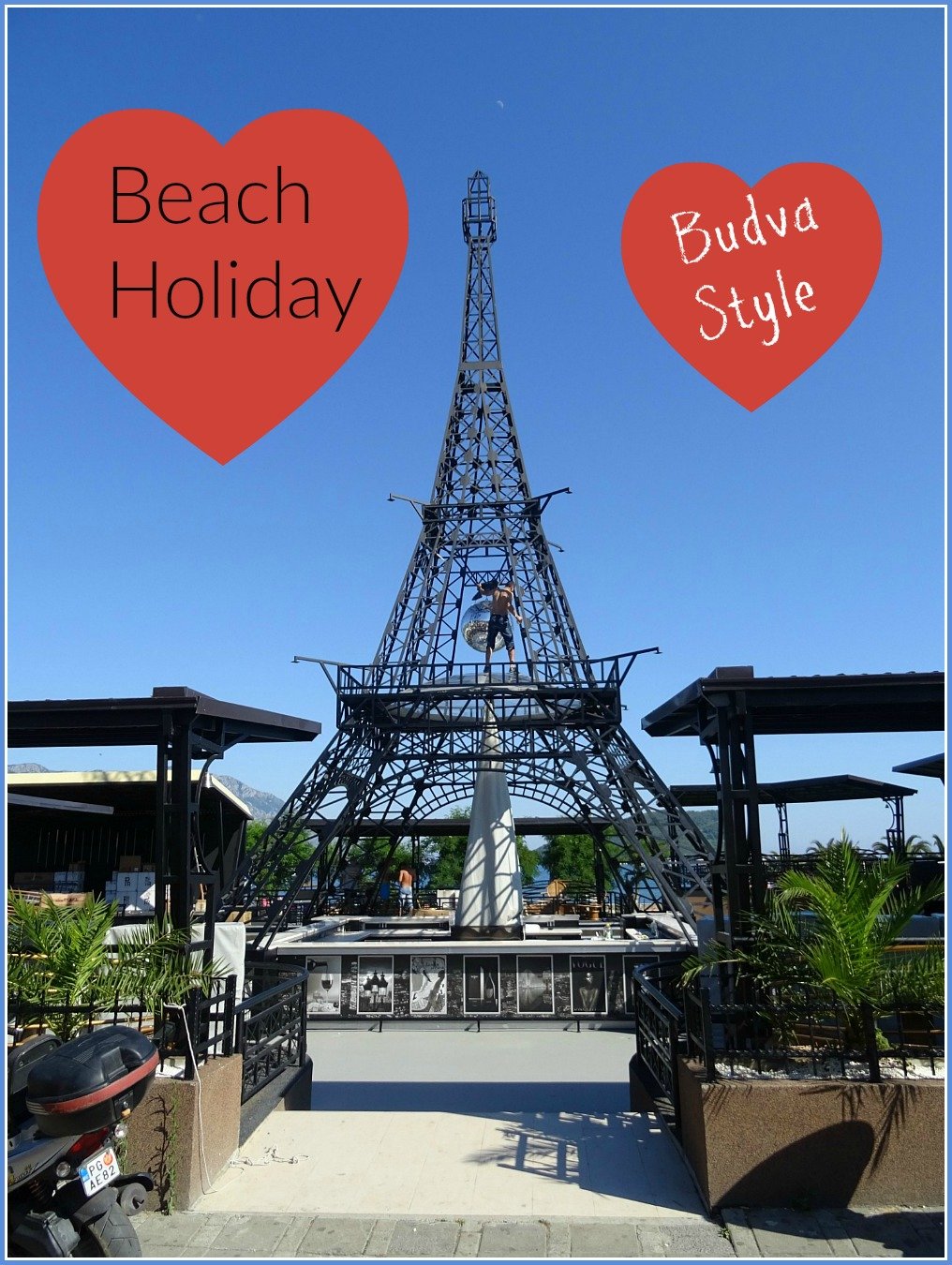 Fighting our way through stalls selling beach towels and cheap sunglasses and bypassing the kid’s carnival rides, we eventually popped up on the promenade. The beach stretches off into the distance but it’s tiny width of 7 m, allowed us to see through the sun-lounges, umbrellas and touts, to the dazzling blue of the Adriatic.

We were here to see the beaches and old town, but many more visitors come for Budva’s night life.

Slovenska beach with the old town in the far left of the frame. 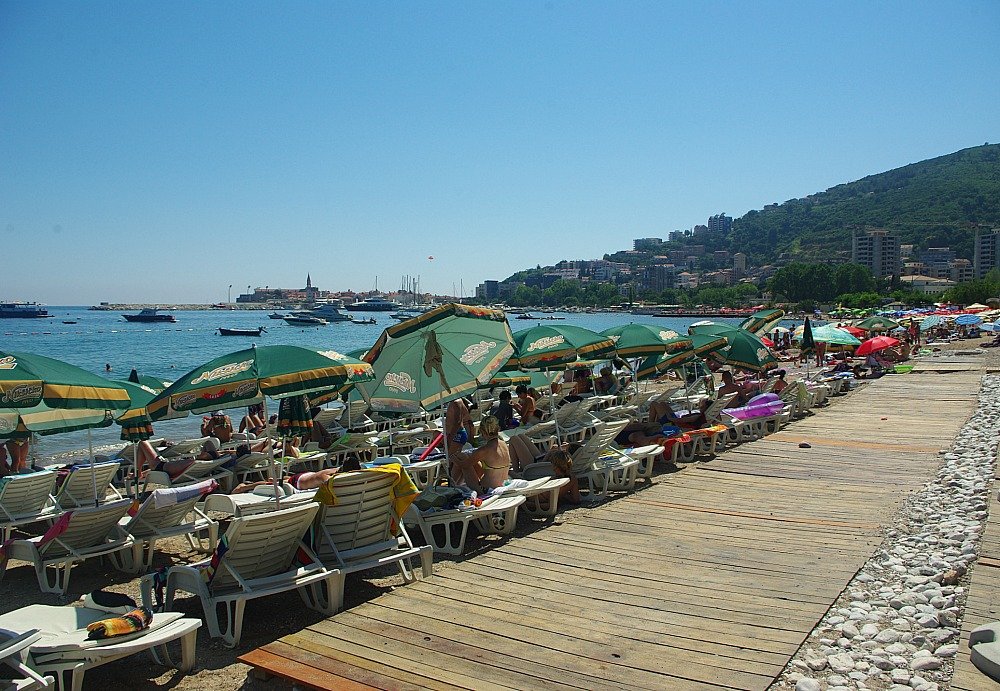 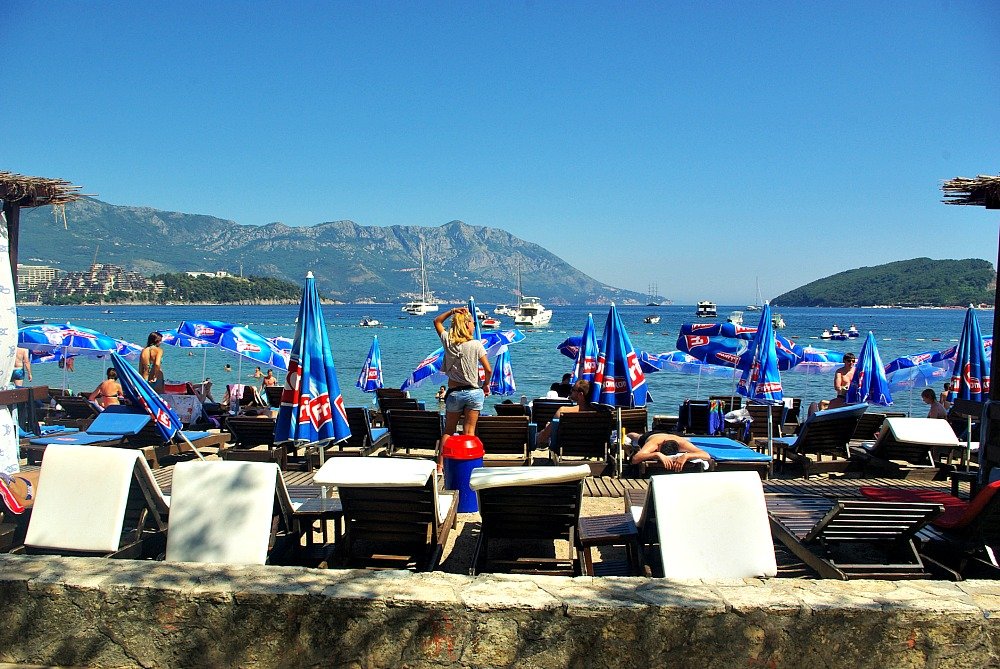 Side by side lounges are not our kind of beach scene, but a quick reality check reminded us this was Europe not Australia. What better way to absorb this fascinating scene than to find a seat in a vine covered cafe and watch the goings on. The majority of visitors to Budva are Russian and Ukranian. 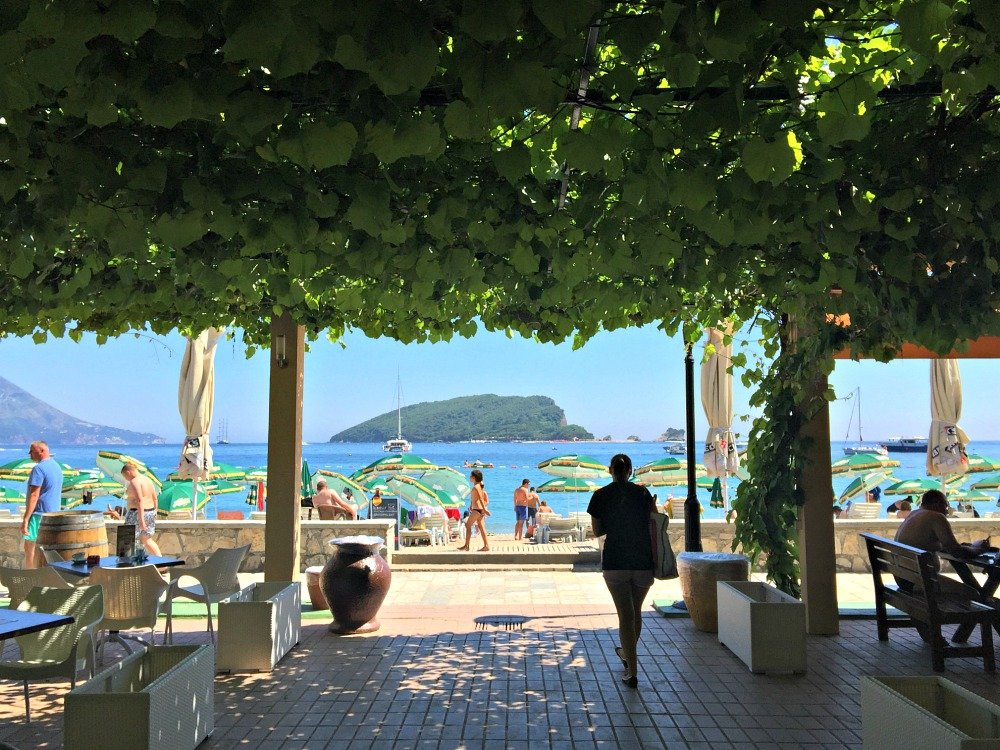 July and August are the months that Eastern Europe flocks to Budva’s beaches and Clubs. Clubs like Top Hill “The best open air seaside club in Europe” which attracts 5000 revellers to an open air venue on Toplis Hill.  The official travel website of Budva claims “Their nights are even hotter than the days” and I believe them. 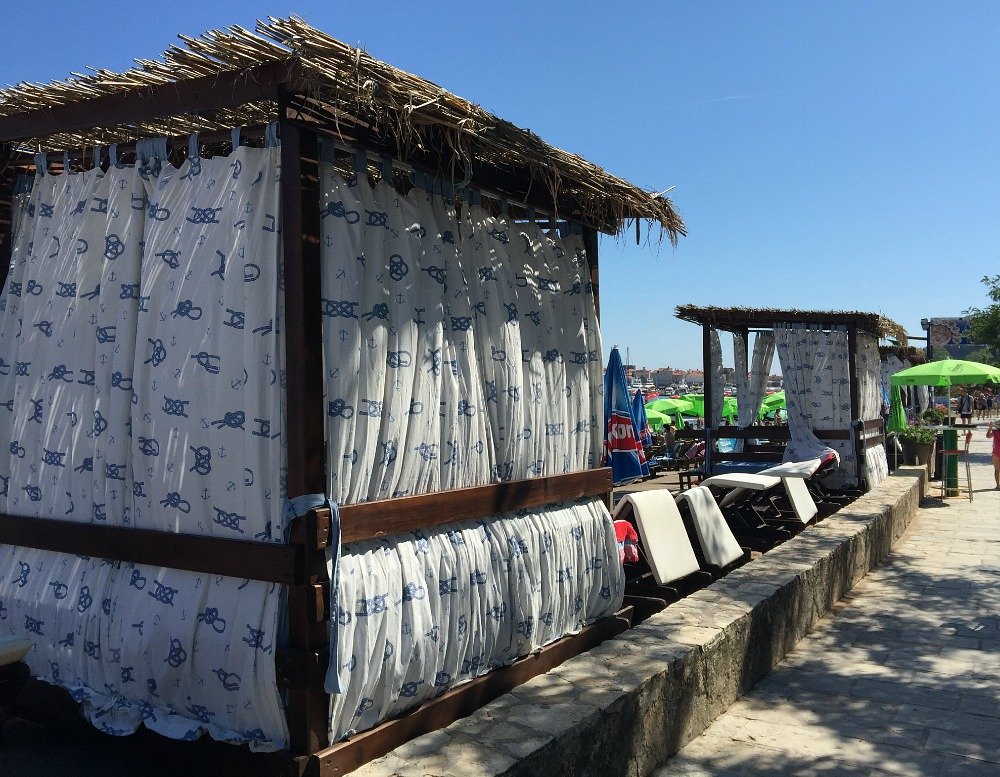 We were headed for a more sedate end of town, along the beach walkway, beyond the marinas to where walls rise from the Adriatic to surround the old town. Open 9 am till midnight May to October and 9 am to 5 pm the rest of the year I liked the casual atmosphere of the walled town. Like Kotor’s, it was rebuilt after being partially destroyed by the 1979 earthquakes.

Immediately before reaching the old town there are two marinas, the closest one to the old town attracting mega yachts in the summer season. 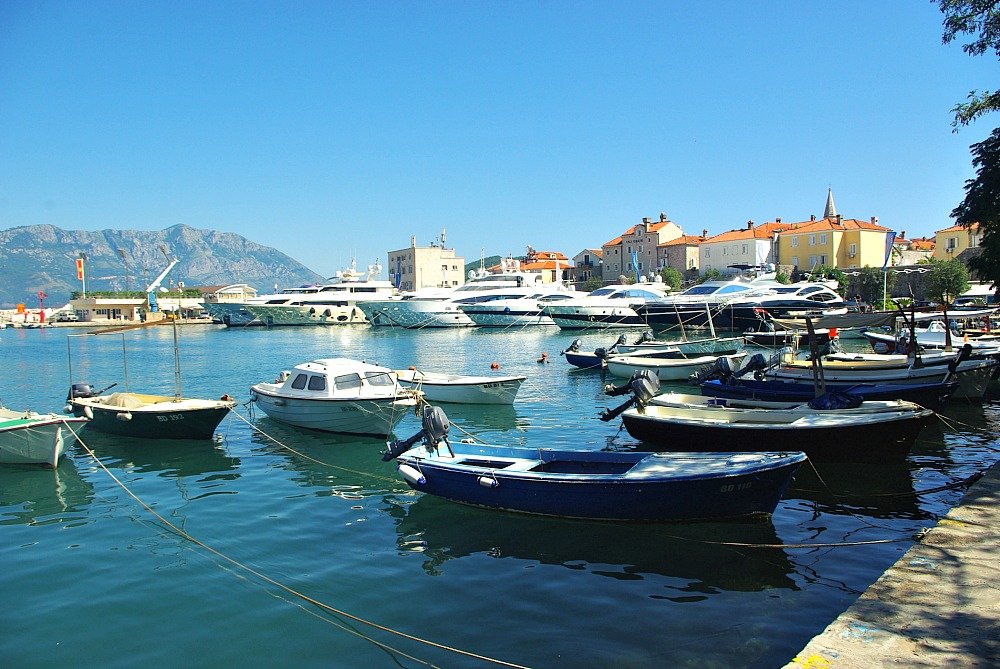 The first Marina with views back to the beach promenade and city. 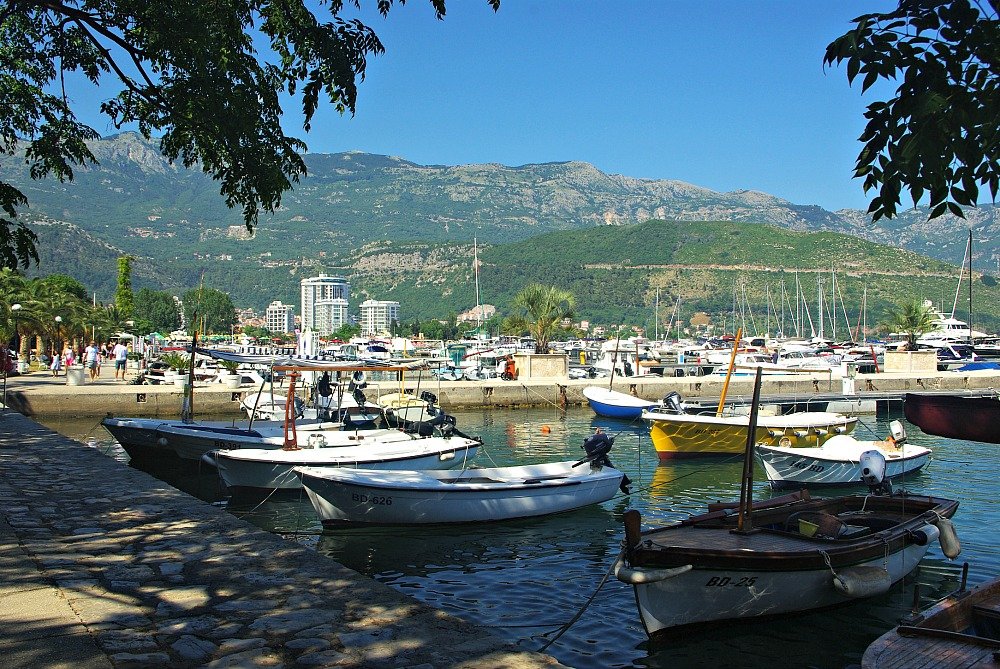 The Marina is a relaxing place to linger and nearby Restoran Porto has a 1st class view. 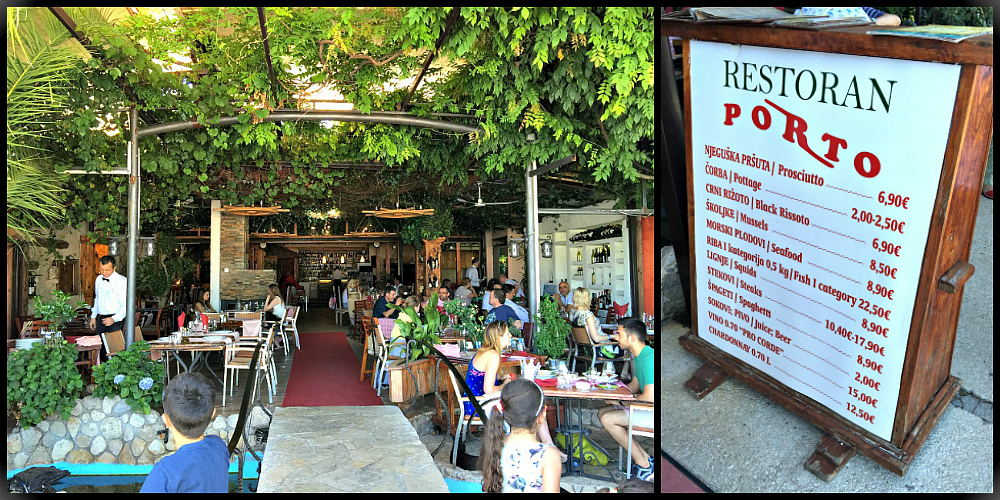 In July and August, the crowded old town, with it’s plays and concerts, is bursting at the seams, but in June you can enjoy a relaxing stroll through the alleys. 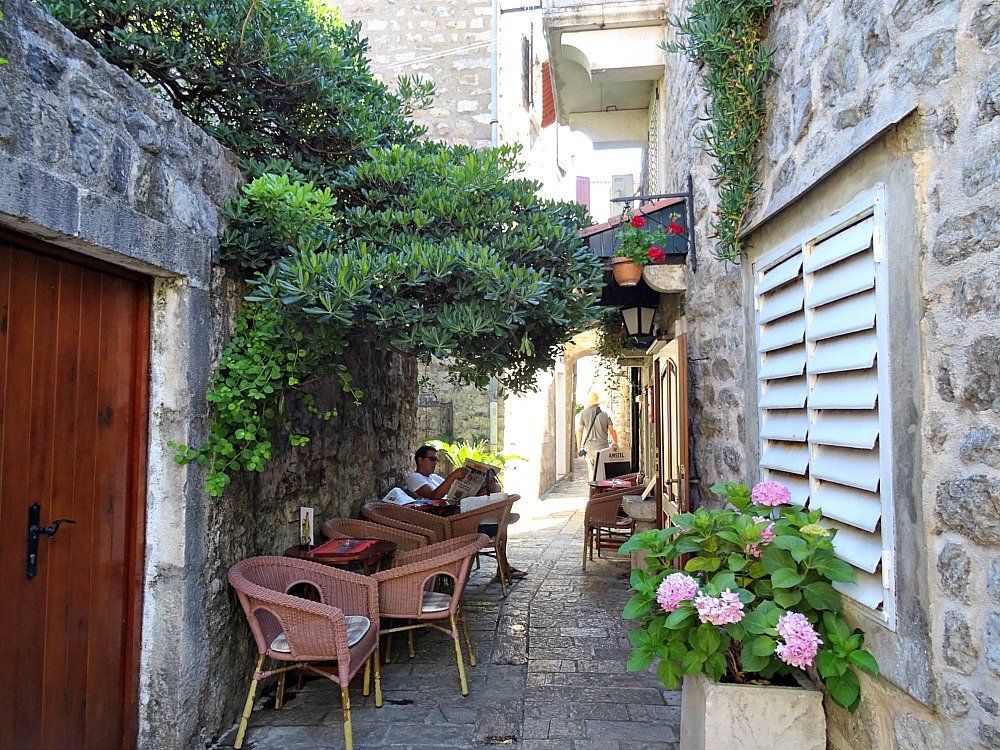 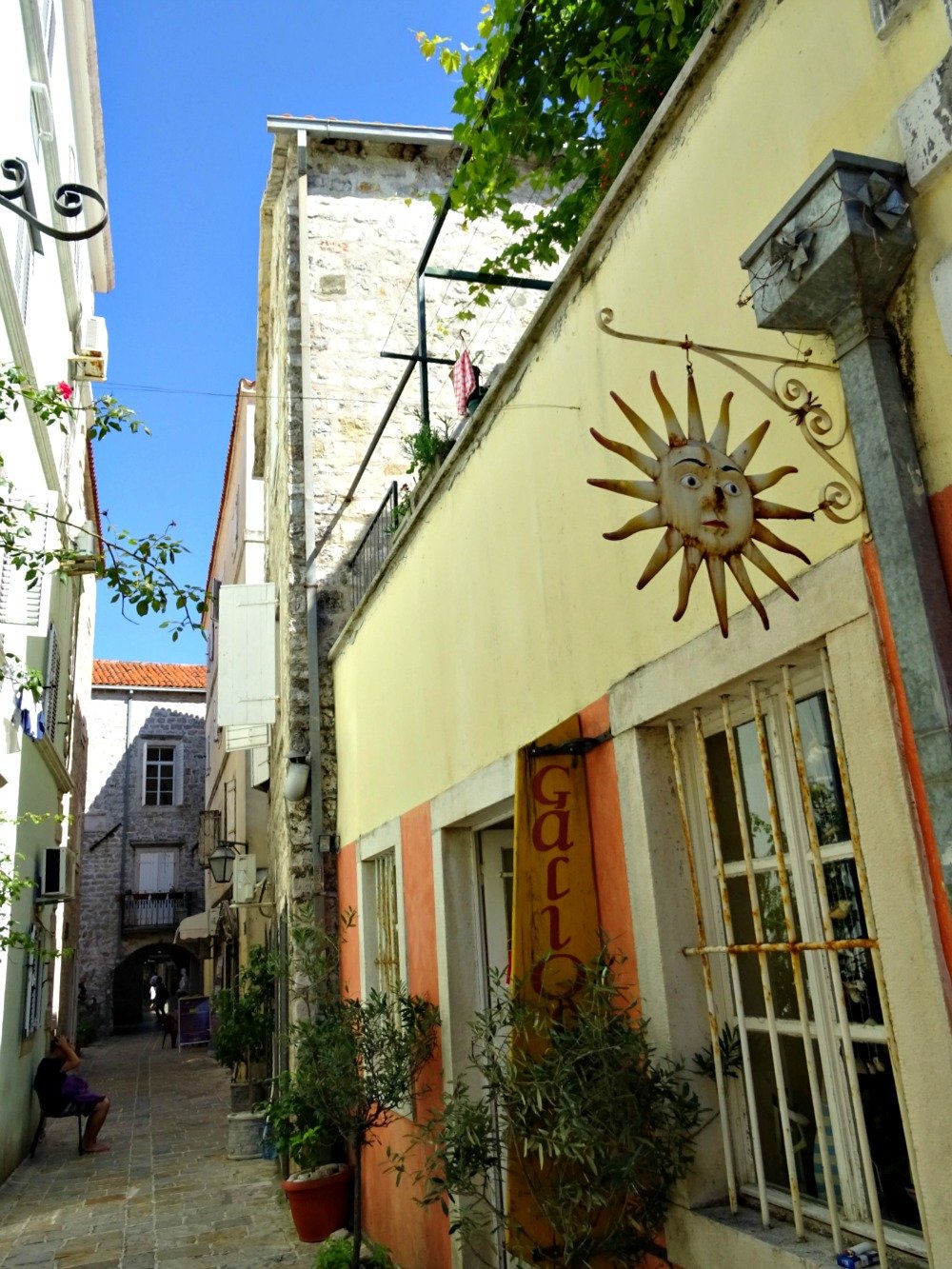 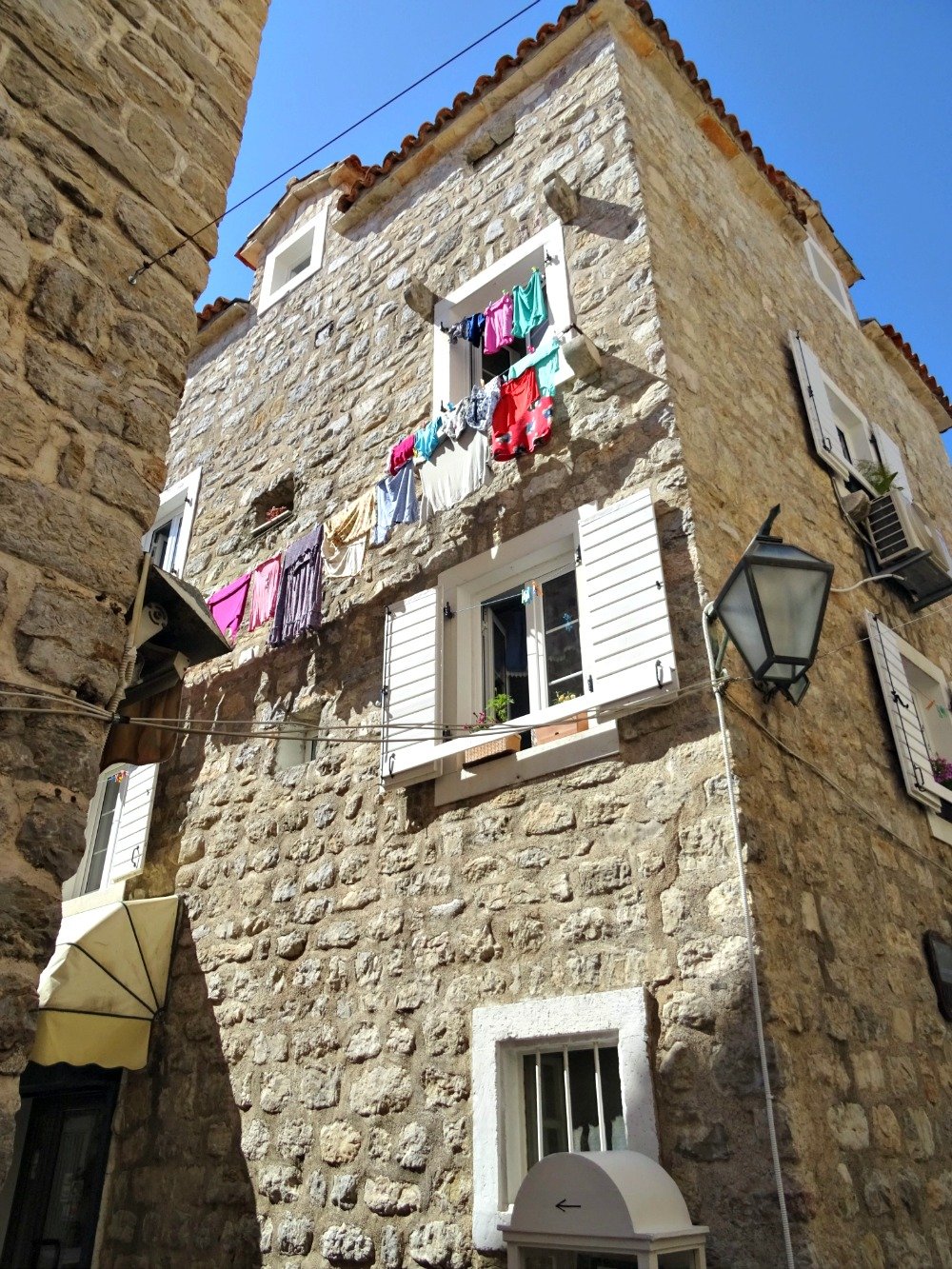 Some parts were more action packed, with tourists, boutiques and men wearing nothing but underwear (and shoes). 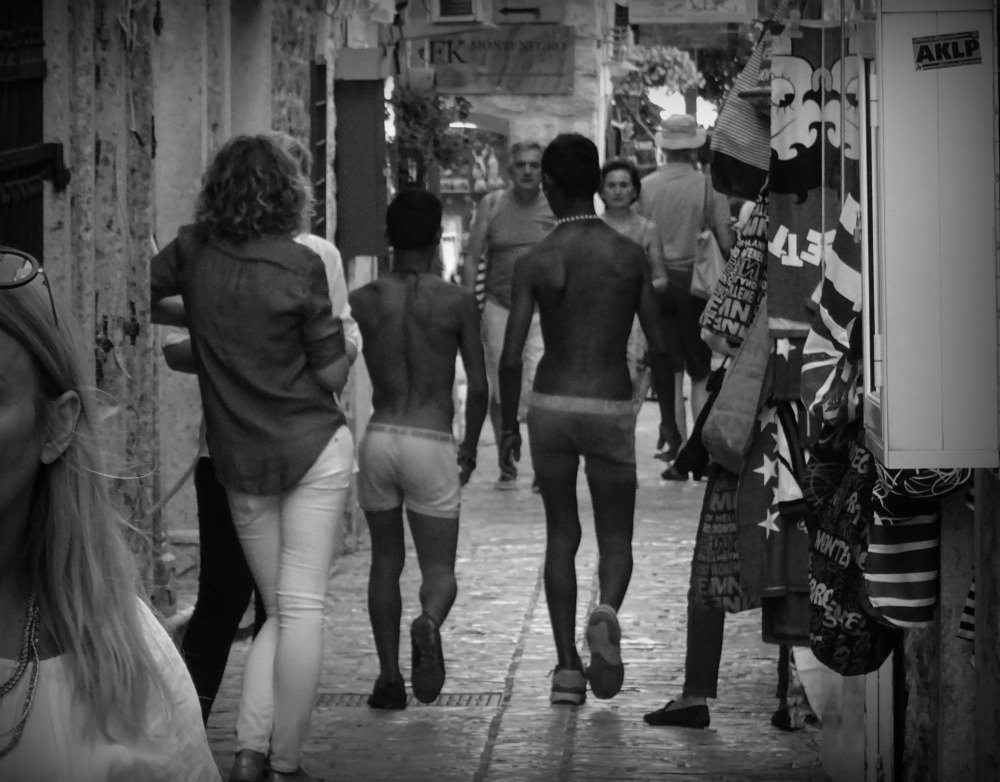 The Citadel is at the far end of the old town with it’s ramparts forming part of the wall. It houses a library full of old books and maps and gives access to a small section of the wall with grand views to the ocean, hills and town. 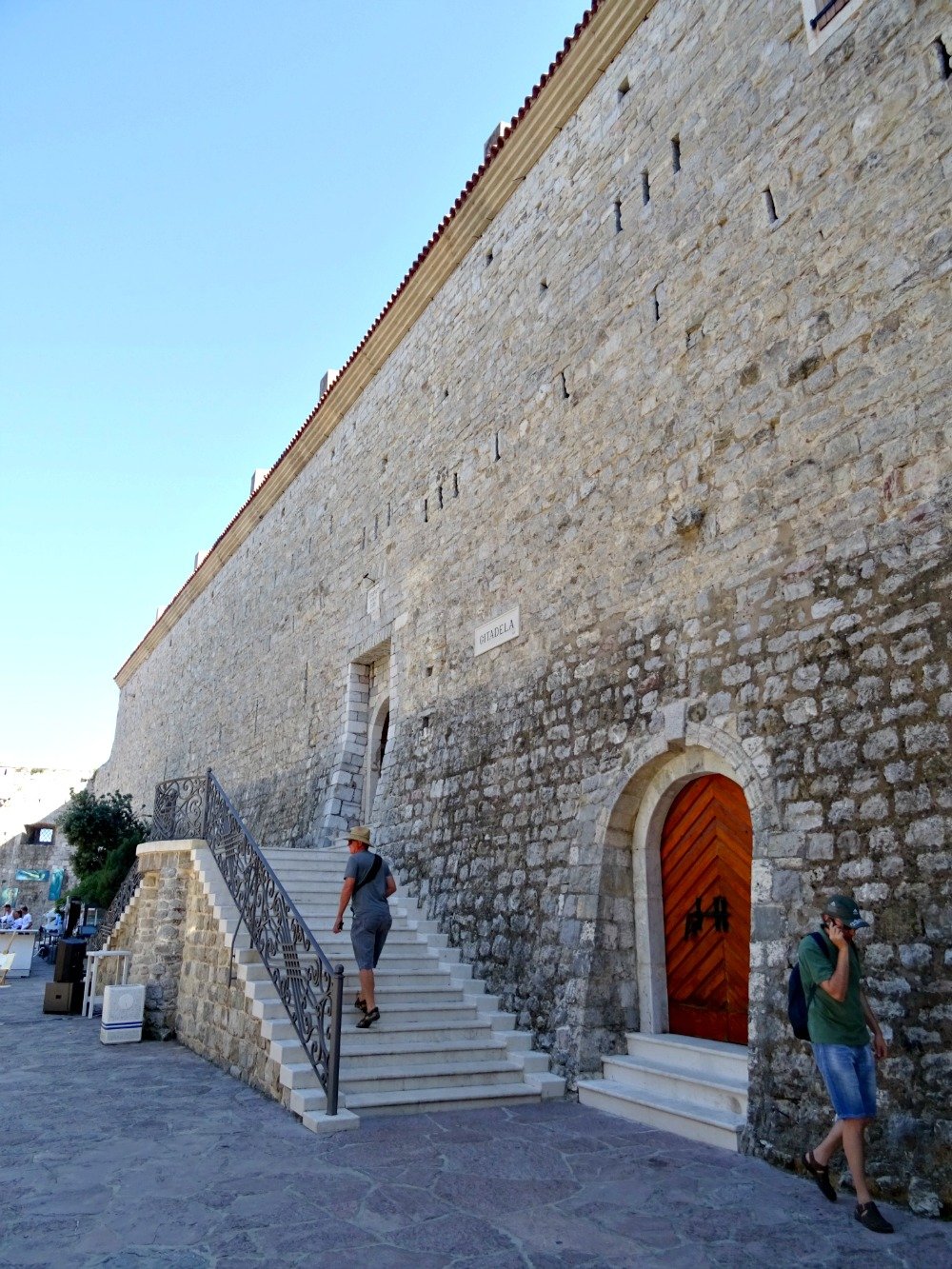 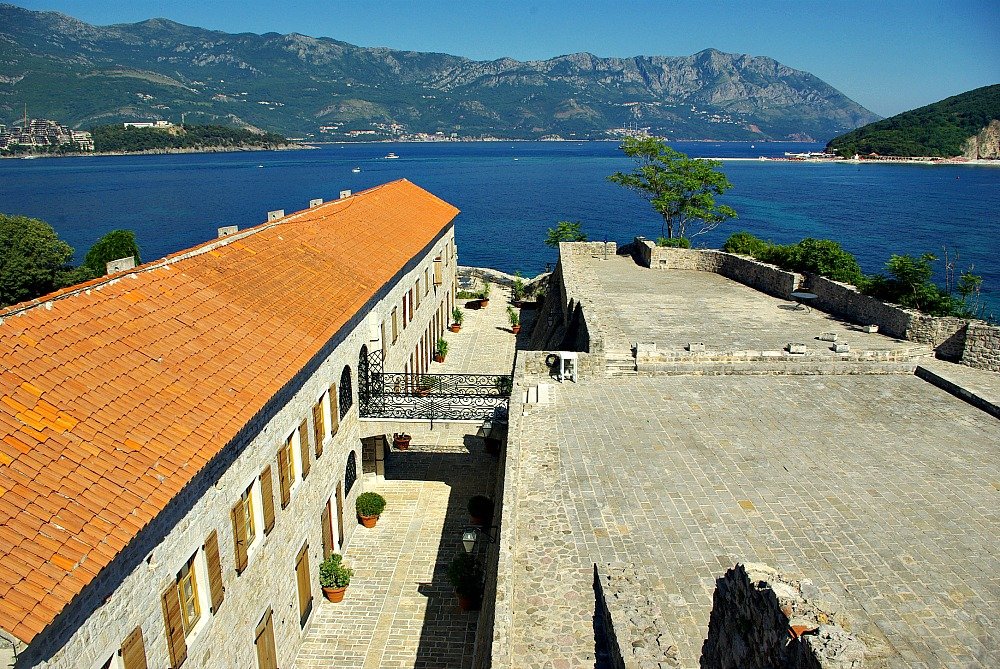 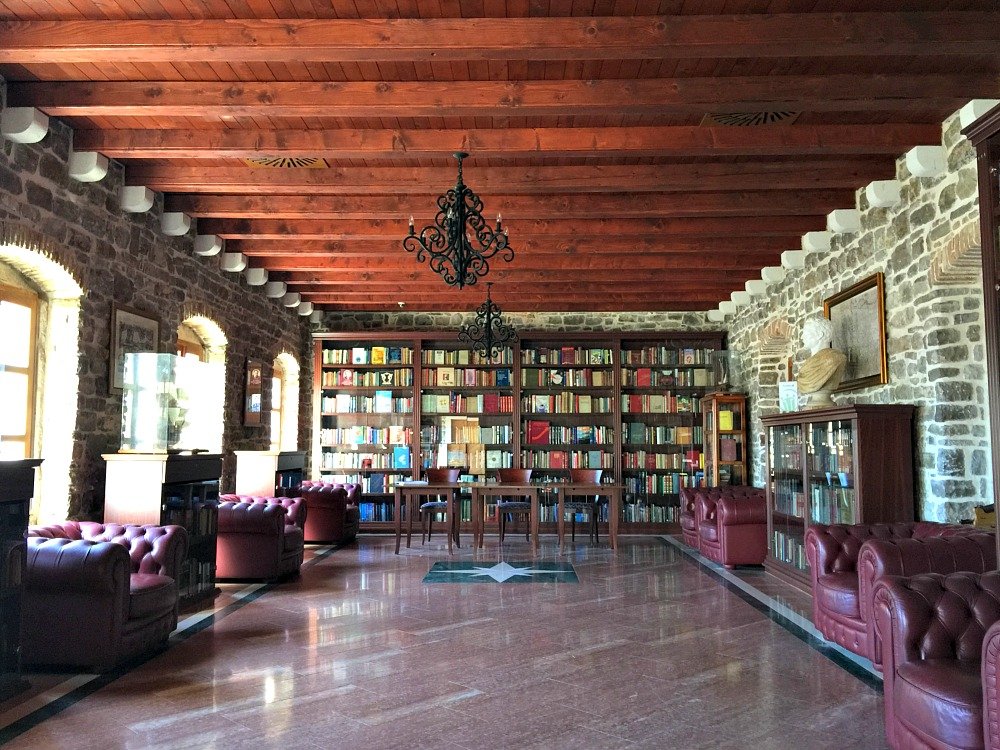 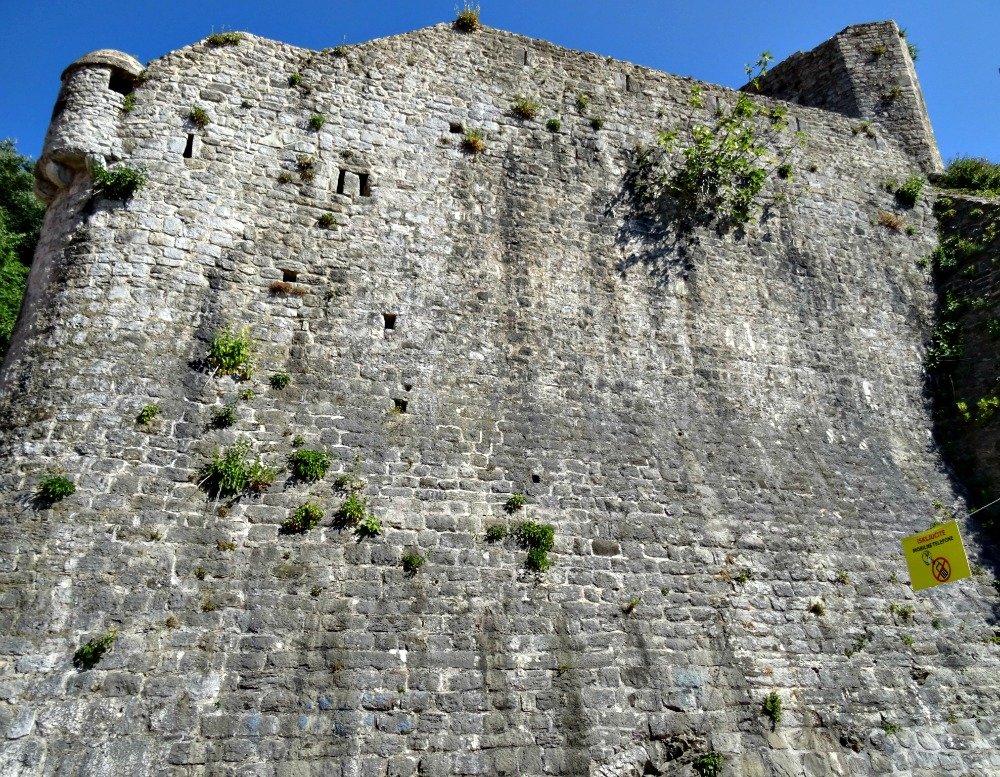 Church of the Holy Trinity. 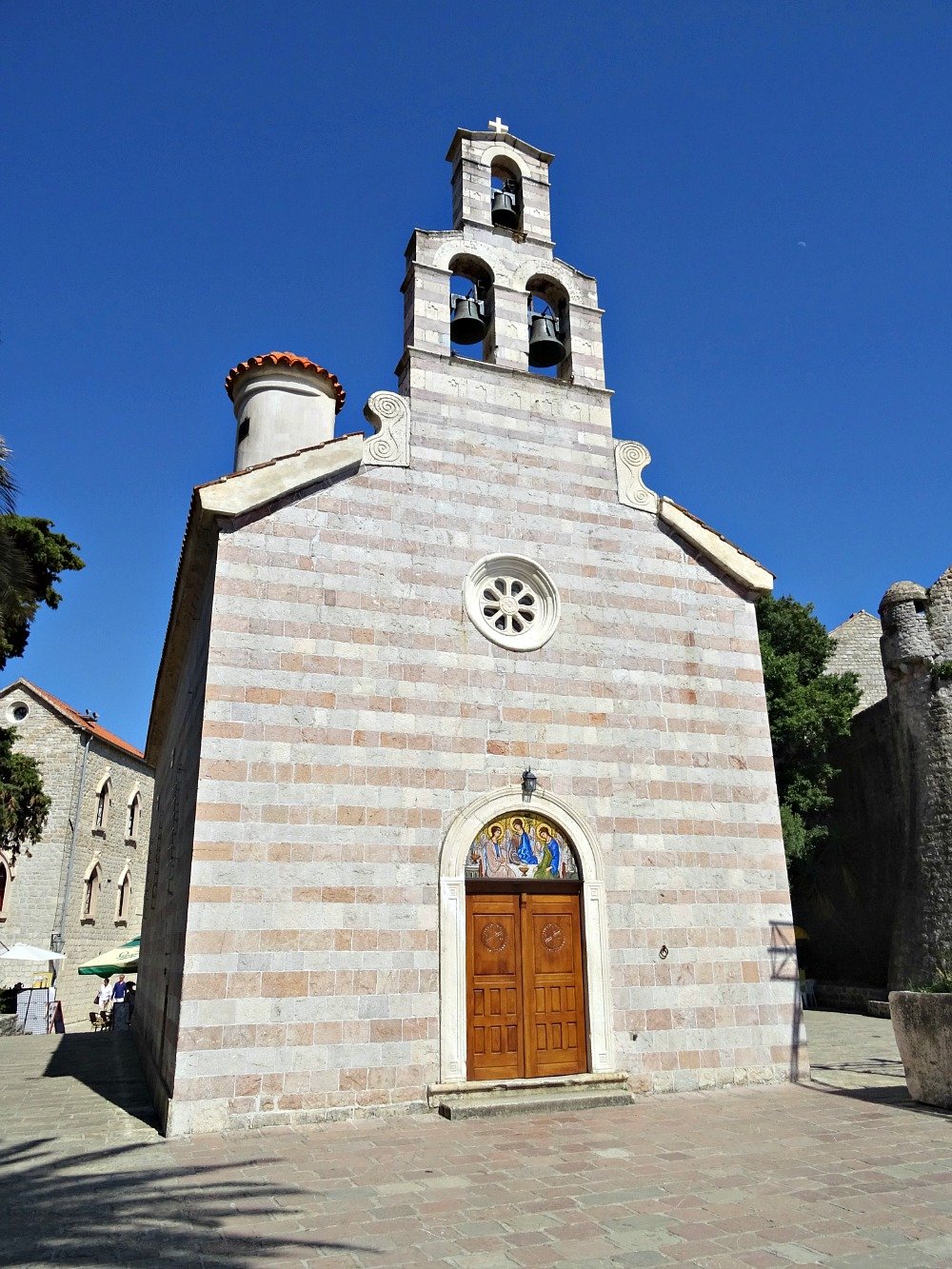 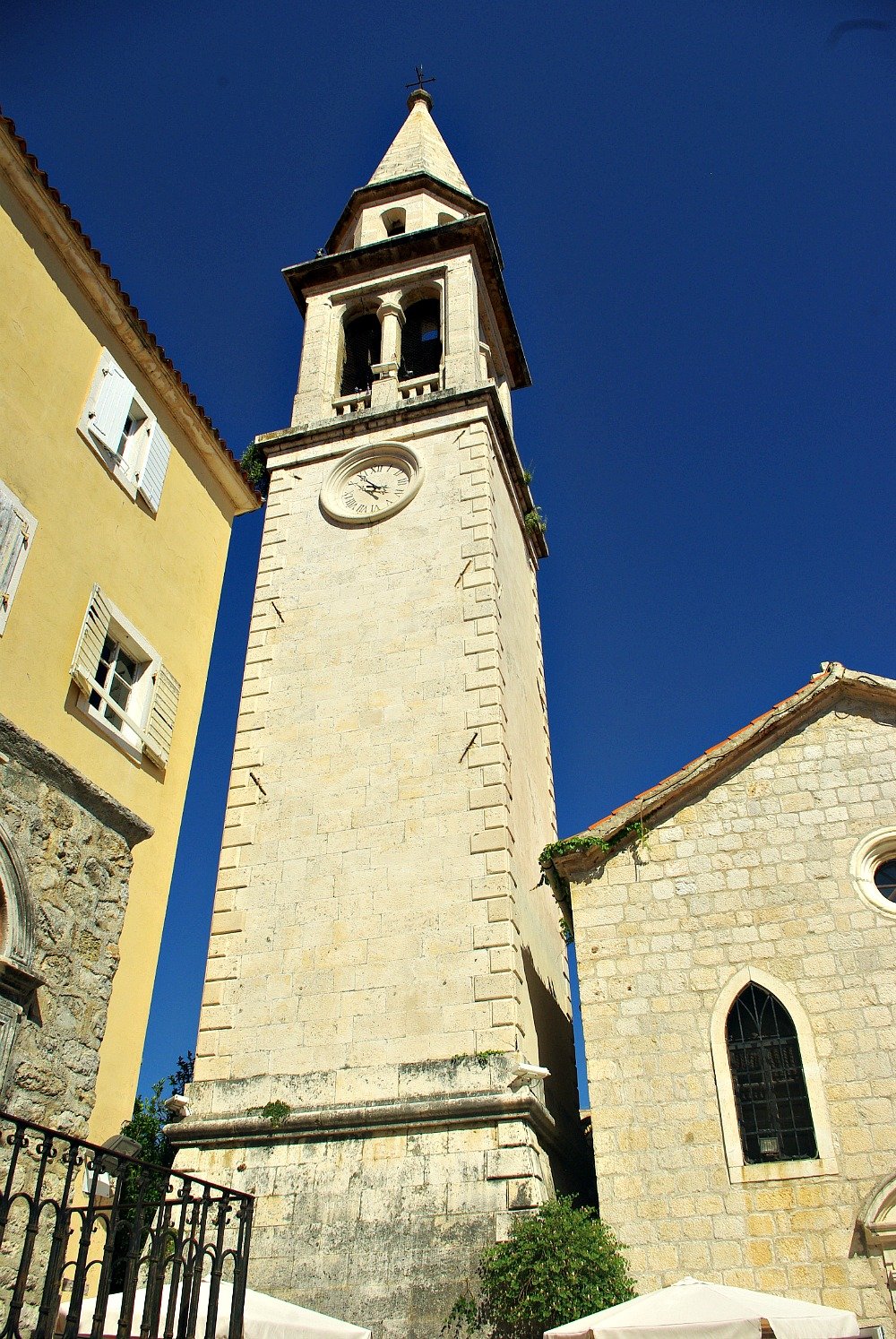 Church of St. Maria Punta (foreground) seen looking down from the Citadel was first built as a Benedictine Monastery in 1864. 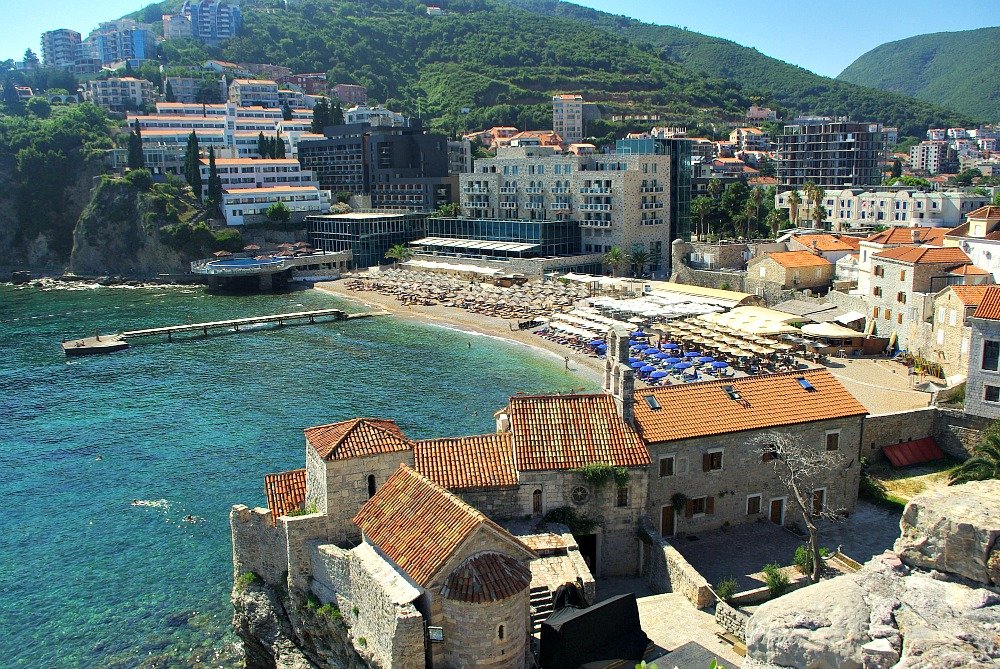 Toplis Hill boasts the largest party space but on the beach side promenade of Slovenska Obalasome final touches were being added to some other popular bars.

Look for the Eifel Tower for Dancing, DJ’s and Live Acts at Trocadero Bar. That’s a huge disco ball being mounted in the tower. 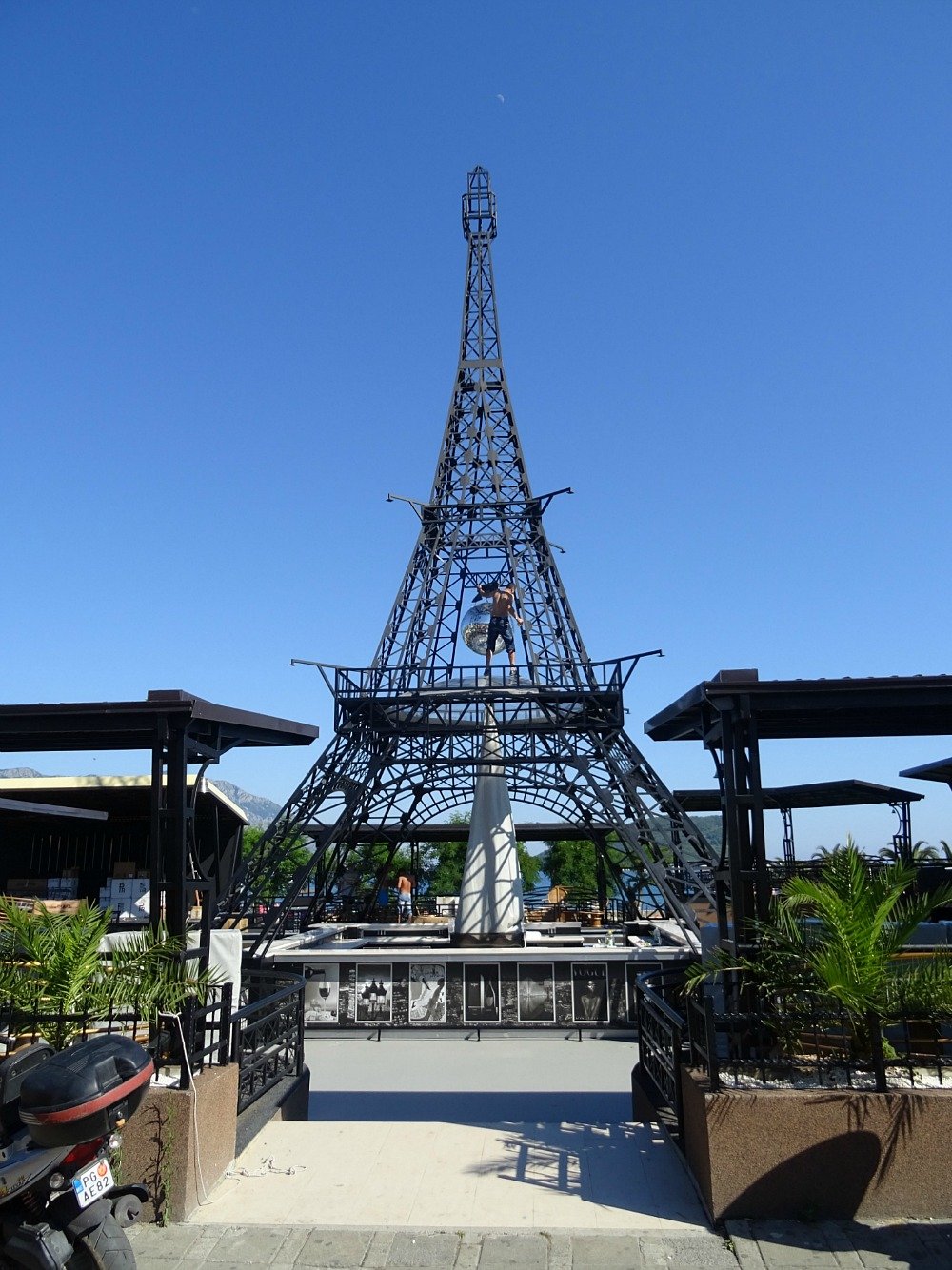 The boat is the bar… 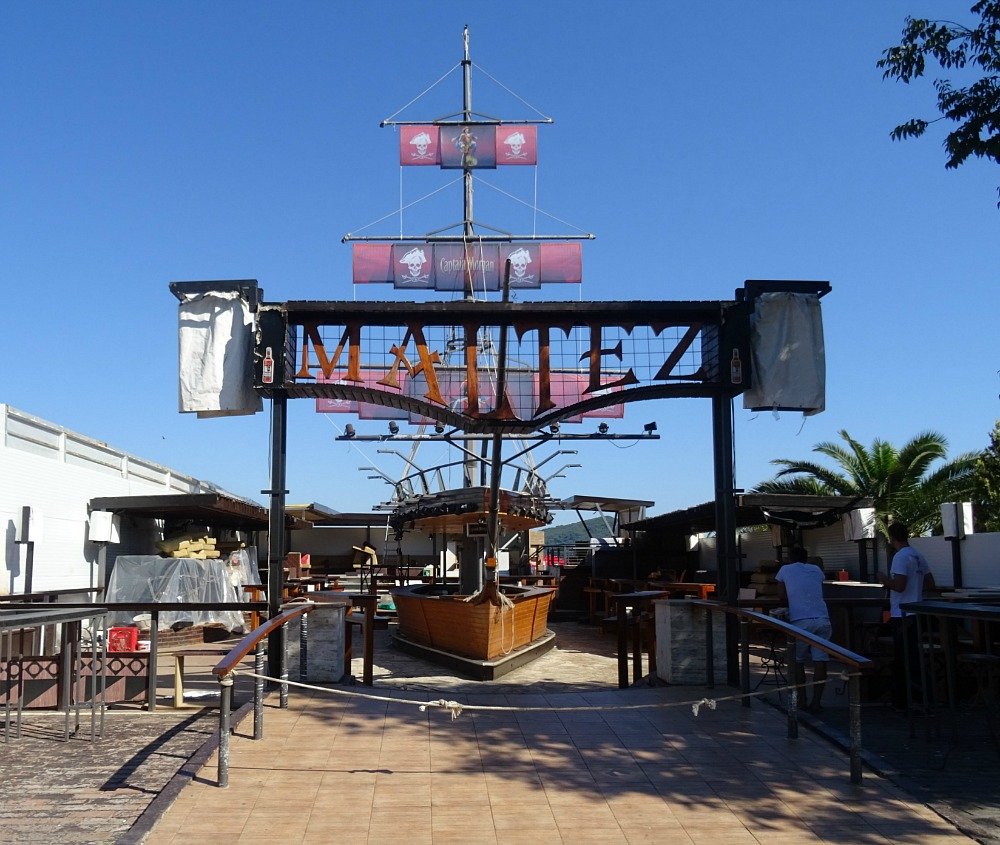 I’d like this bar when my feet were tired. 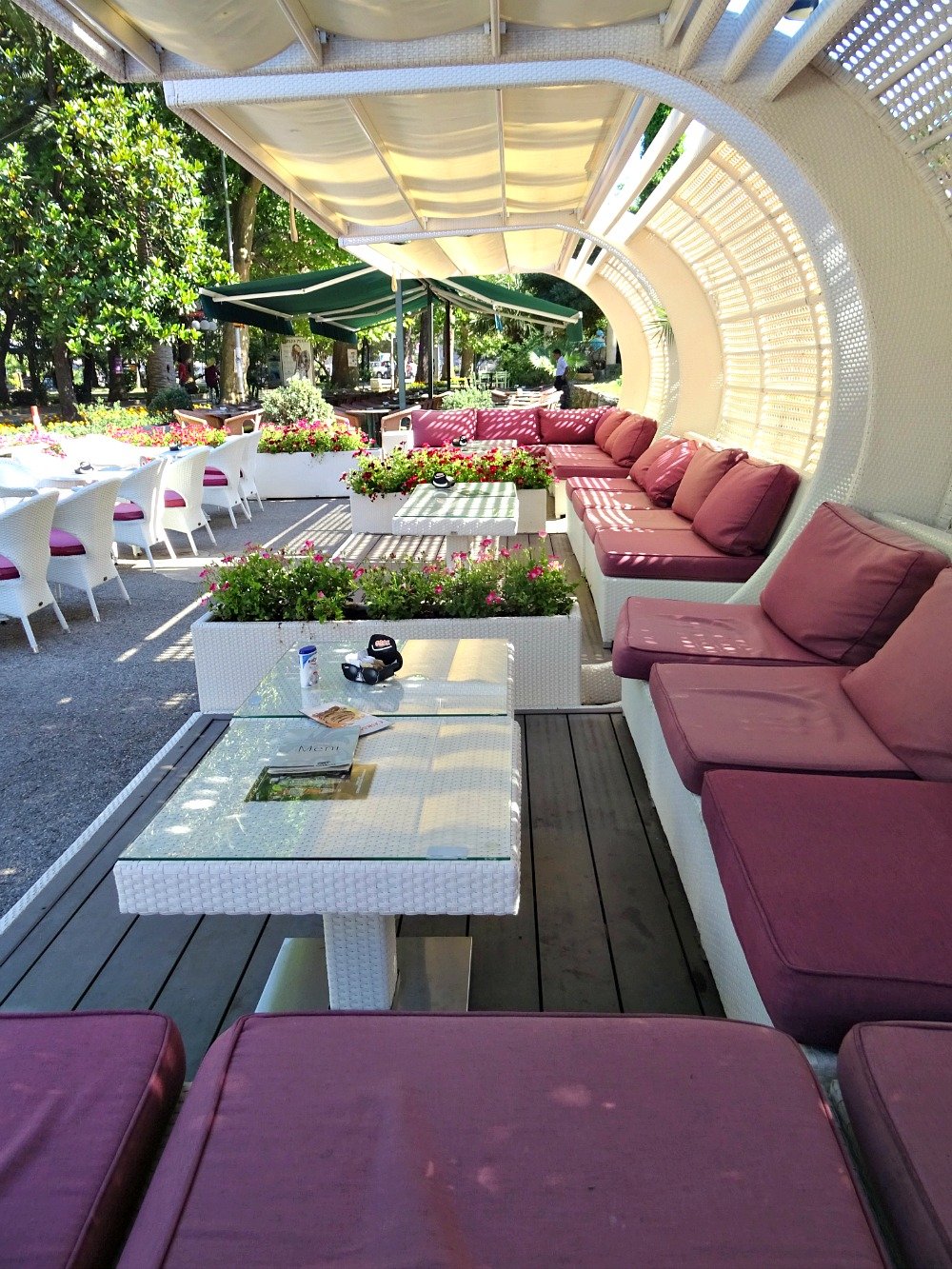 Outside the Wall – Party Space. The white rope around the top of the wall is flouro lighting and this whole space will be full of revellers till 1 a.m. 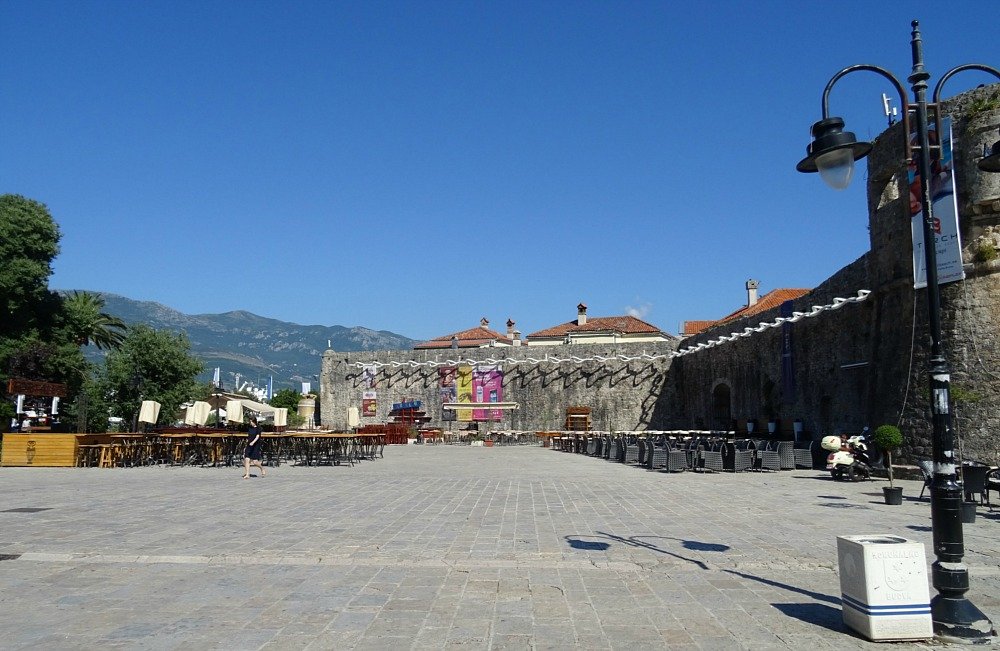 Deer roam free on St. Nicola Island only 1km off-shore. The kids call it Hawaii and you can catch a water taxi from near the marina 3 Euro each way. It boasts restaurant, cafe and three sandy beaches. We didn’t have time to indulge. 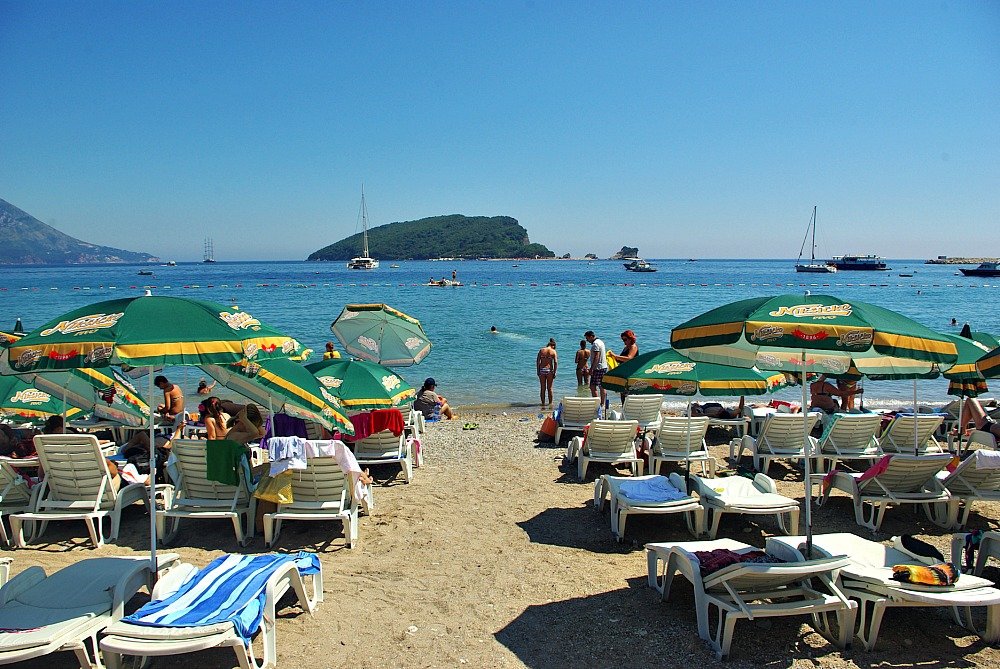 Looking across the walls from the Citadel over the top of the churches of the old walled town to modern day Budva and the hills. 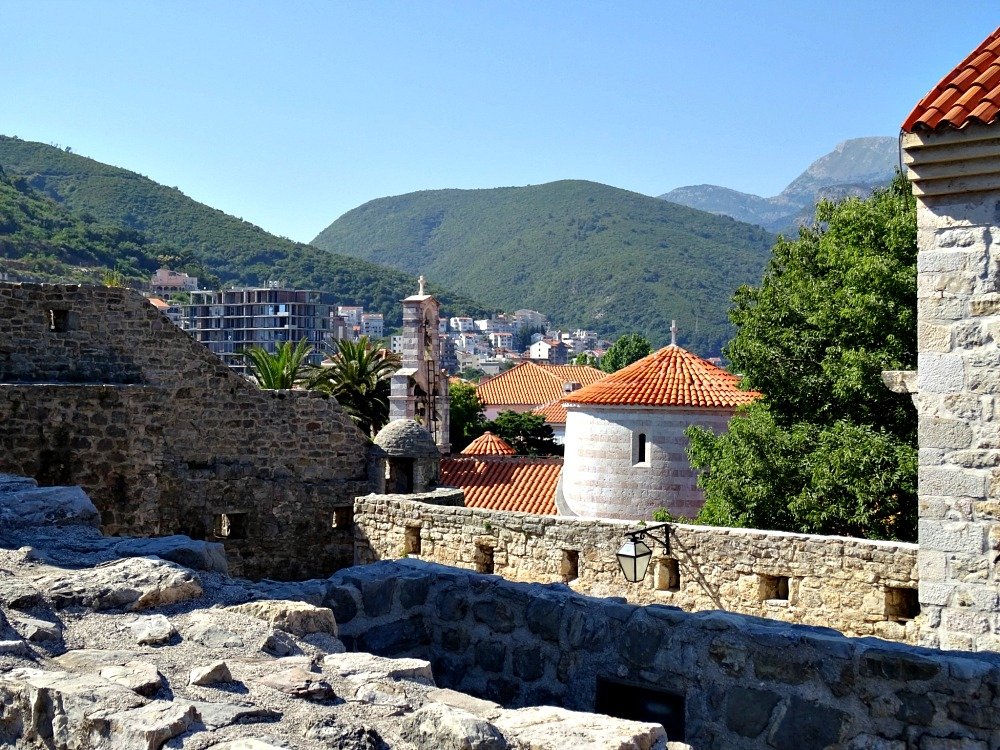 Natural lush greens and deep blues when arriving in Budva from Bay of Kotor. 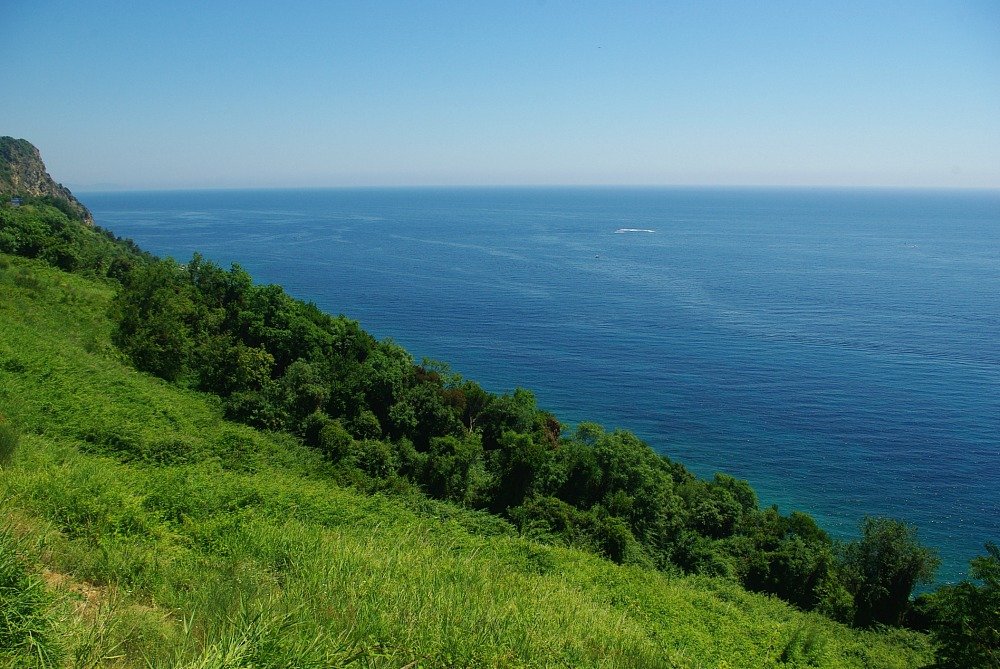 Looking down to the beach to the north of Budva. The road from the Bay of Kotor can be seen. 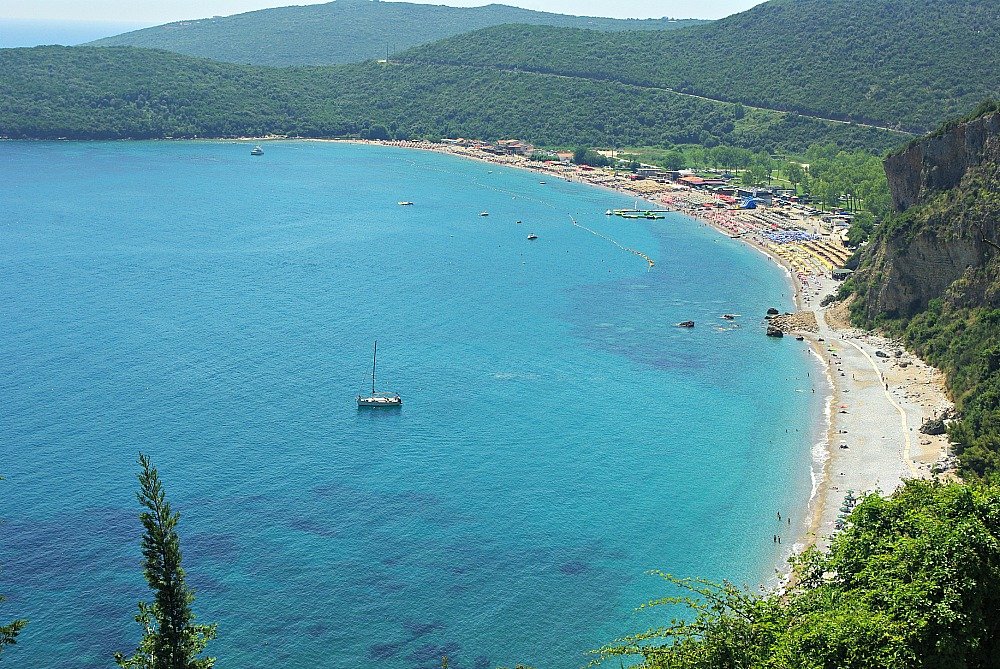 We love the ocean, so it follows that we love beaches. Budva’s Slovenska Beach reminded me of a teenager – bold and unrepentant. The beach scene was not too crowded in June, but would be torrid though July and August. On the other hand if I wanted to party the night away I’m guessing it would be outrageous fun.

Read about local beach buses and those from further away here. In summer there are daily buses to Dubrovnik.

The closest airport is at Tivat (Bay of Kotor) 20km to the north.

Dubrovnik to Kotor Montenegro + Things to do in Kotor
Next Post: Plitvice Lakes Destination Guide