After the culture shock of our arrival in Marrakech, we showered and regrouped.  Dan the owner of our Riad took us on an initiation walk through the Medina to Jemaa el Fna Square, pointing out landmarks by which to find our way.  Dodging soccer balls, motor bikes, bicycles, barrow men, donkey-drawn carts, beggars, cats and bad smells, we made our way to the square, where  Dan left us to explore. 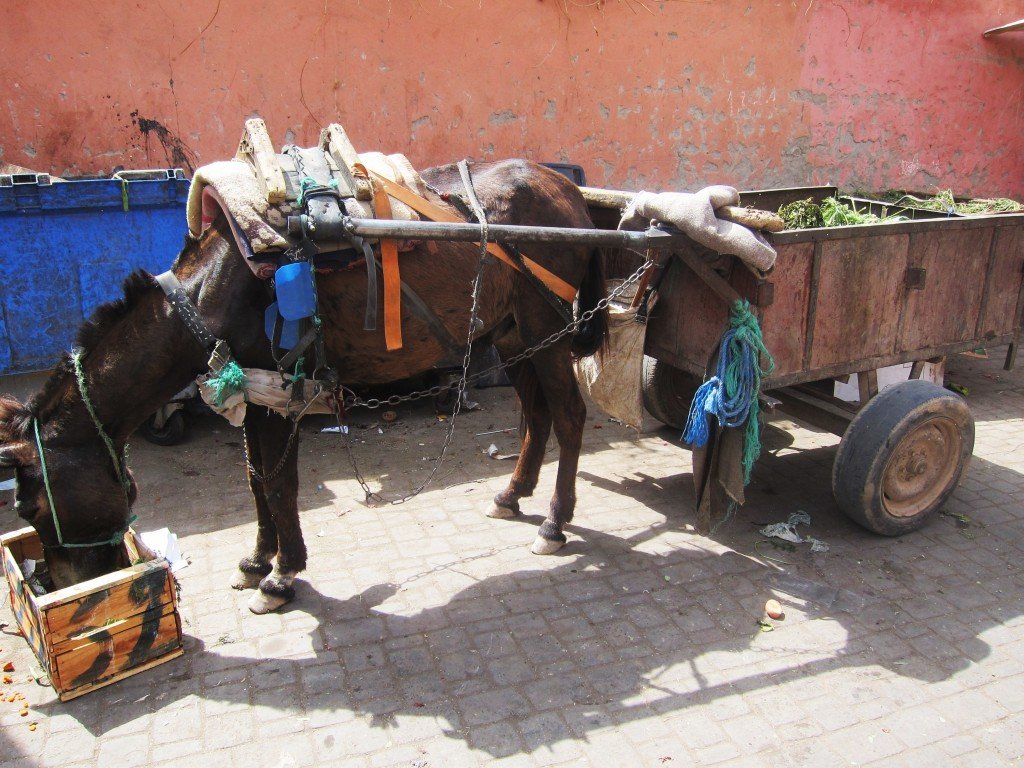 By day the square is one huge open space dotted with monkeys chained to their owners, brightly dressed water sellers, rows of orange juice carts, nut and date carts and a few Argan Oil Sellers.   If the co-operative’s name is on the argan oil bottle it is probably authentic, but it is probably better to visit a co-operative if you are going into the Country and buy direct from them. 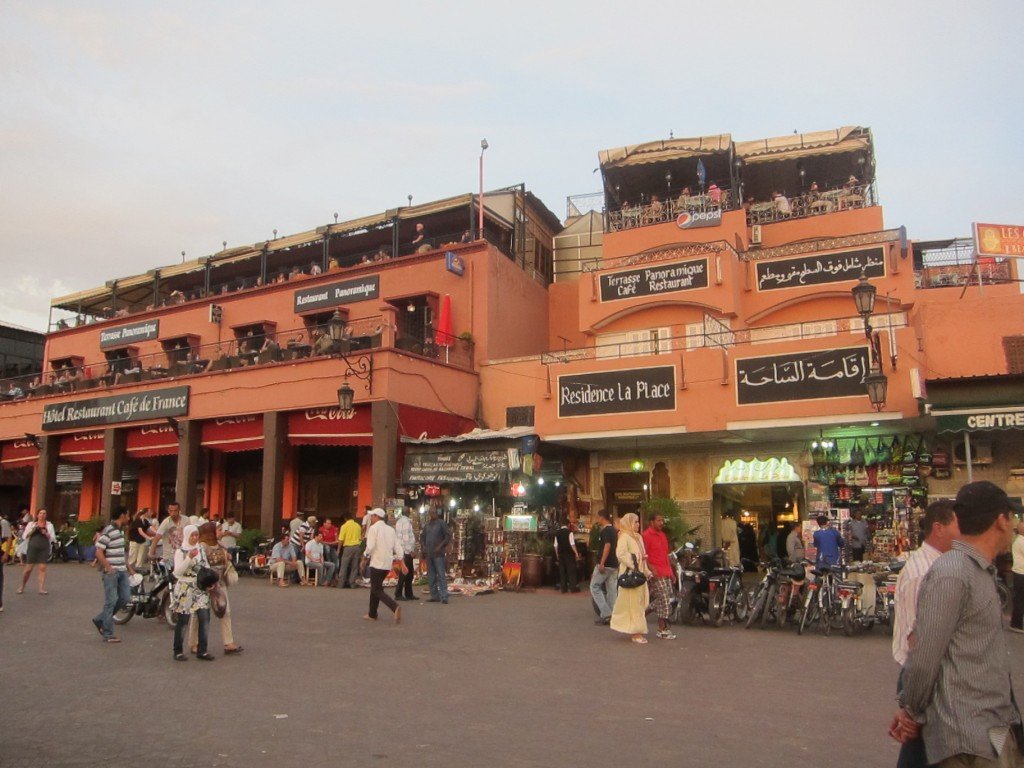 The interlocking maze of lanes that form the souks, adjoin the square and the Medina.  We would explore those the next day.  For now we were happy to return to the Riad, just to make sure we could find it again, and then with evening approaching eagerly return to experience the madness and magic of Jemaa el Fna. 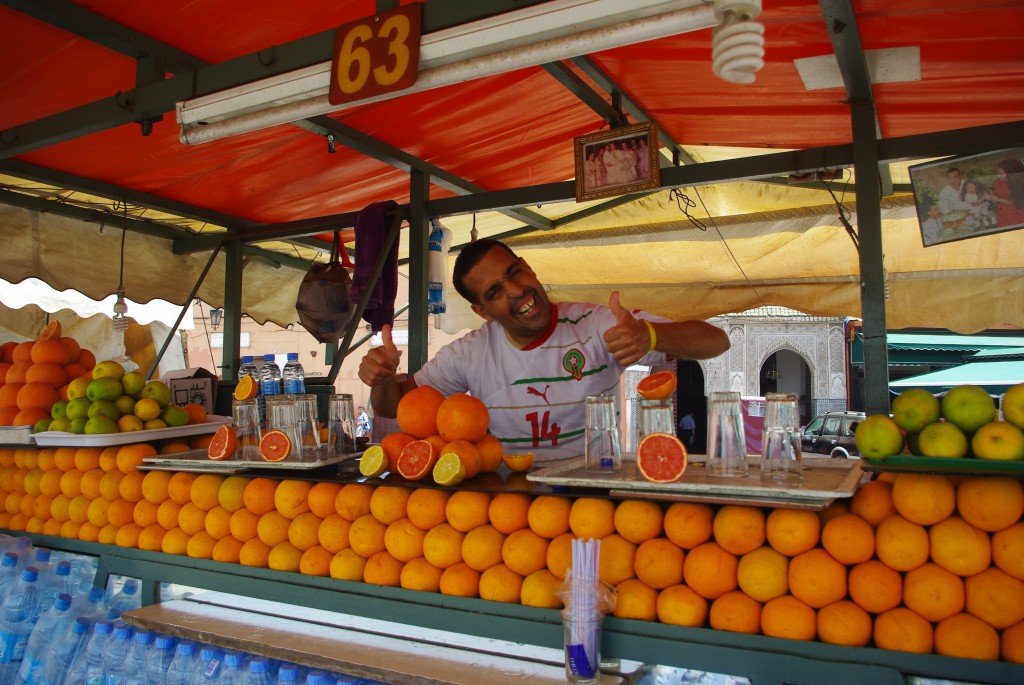 Sidestepping dancing cobras and their turbaned owners, we grabbed a freshly squeezed, 40 Dirham (40c) glass of orange juice and surveyed the scene.  Night didn’t fall till after 9 p.m., but the one hundred food stalls had set up already and were open for business.  Touts tried persistently getting customers to their stalls, shouting  “You Remember – No. 33 – Best Food – You Come Back”.  They are well versed at picking nationalities, and Marty’s hat brought howls of “How ya goin’ Mate” and “Kangaroo” . 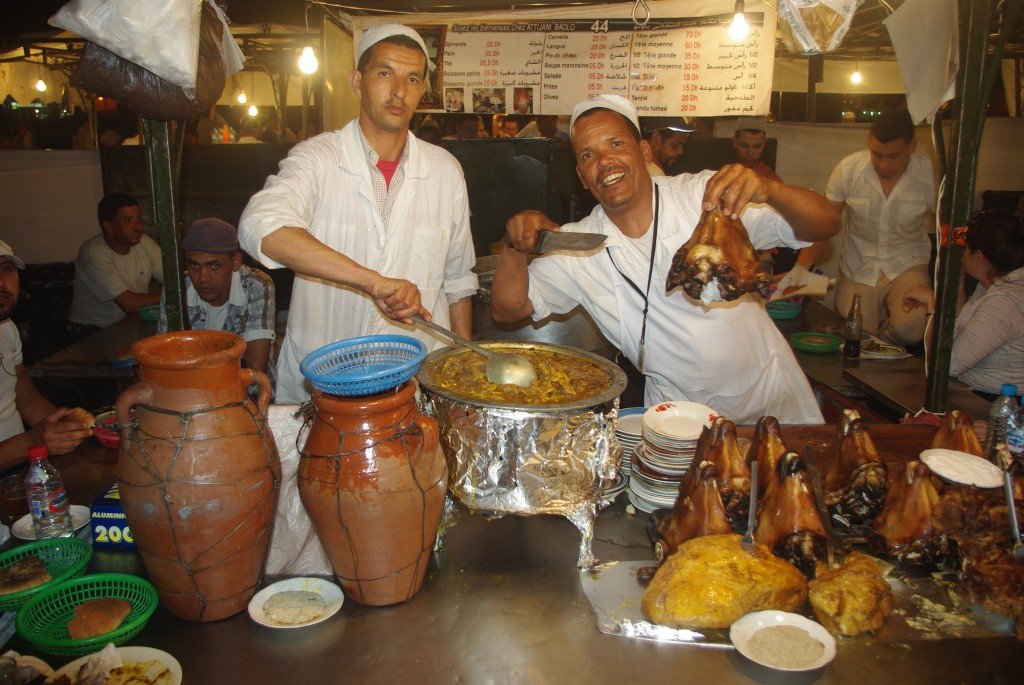 We had already decided to eat at No. 1 Stall, but wanted to look around first.  Smoke poured from the brazier fires, stinging our eyes, and the acrid smell of flare grilled meat filled our noses.  Every stall displayed their produce, with impressive style.   Piles of tiny sausages, plates of lamb, chicken and lamb threaded on long kebab steels, bowls of cooked aubergine and spinach, tubs of olives some glossy green and others wrinkled black, bowls of vibrant salads, couscous, tagines, calamari and fish.  Every afternoon they set up and then late that night it all had to be pulled down, only to repeat the performance the next day.  Between the orange juice vendors and No. 1 were the stewed snails – a local delicacy – should we try some for entree?  Surrendering to a tout from No. 1 we recited as instructed, “Mr. Dan sent us”.

We over-ordered thinking we would get one or two of everything we ordered, but instead received a plateful of each –  sausages, chicken kebabs, calamari and mixed vegetables (delicious), served with bread, and two plates of red sauce.  On investigation one appeared to be tomato and one chilli.  Salt, pepper and cumin were there to pinch onto our food.  Supposedly the cumin has a calming effect on upset tummies! 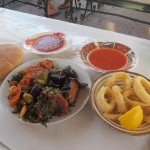 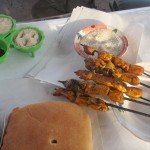 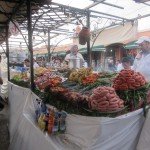 As night fell we sat on the balcony of the hotel “Le Grand Balcon du Cafe Glacier” that overlooks the square.  Carriages pulled by horses clattered beneath us;  the sound of the snake charmers’ flutes mixed exotically with the insistent Berber drumming; Berber story tellers were encircled by rows of entranced listeners while magic acts and tricksters kept the locals enthralled. 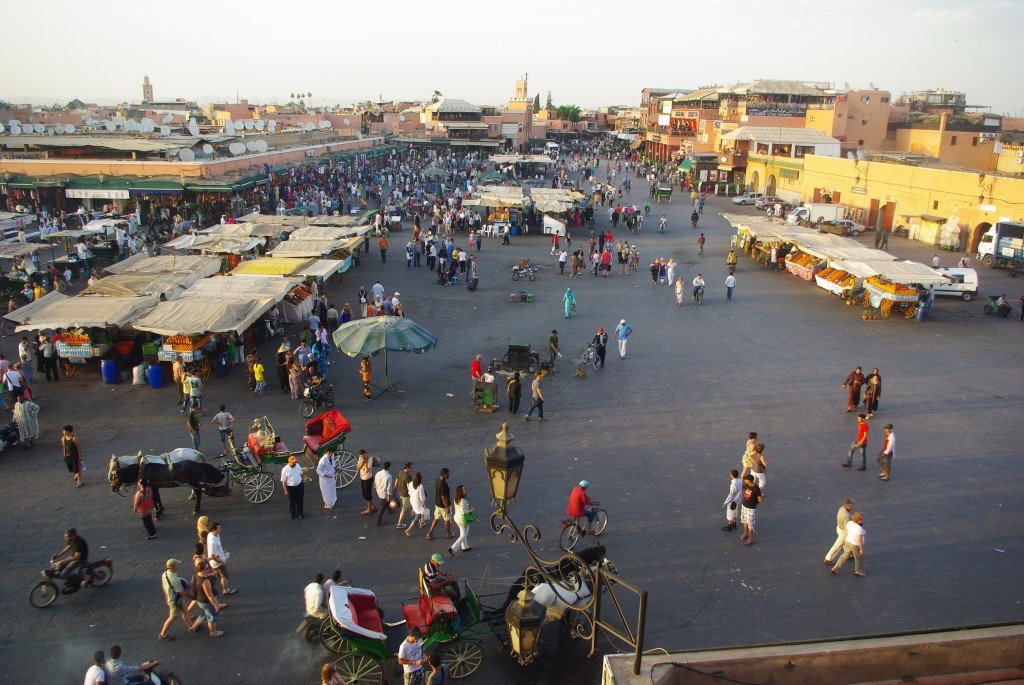 I felt sorry for the monkeys.  They sat in nappies, chained to their owners, waiting for tourists to pay for a photo.  As we watched from the balcony one escaped.  With it’s owner in hot pursuit it ran off through the crowd, taking refuge under a series of carts.  The chase lasted quite a while and had the crowds excited and cheering for the monkey.  Before night descended, the snake charmers and monkeys departed.

Two Moroccan women fought over a stall space.  There was yelling and pushing and then the drummers intervened.  One was led away between the orange carts to cool off, but she shook off her captors and returned to the fray.  More people became involved.  There were vocal threats and posturing, but  I am pretty sure everyone involved enjoyed themselves immensely.  When we told Dan about it the next day, Will the Riad manager, (and Dans step-son), already knew about it.  The Medina gossip wheel had turned.

I can’t think of a more exciting thing than walking in Jemaa el Fna for the first time at night.  As we had only just arrived in Morocco, everything was wonderful and strange, but this square at night was a sight to behold.  It is the same, but different, every single night.  It is the loudness of the drumming and the strange flute music of the snake charmers – the anticipation of what might happen next (a snake around the neck), that gets the adrenalin flowing. 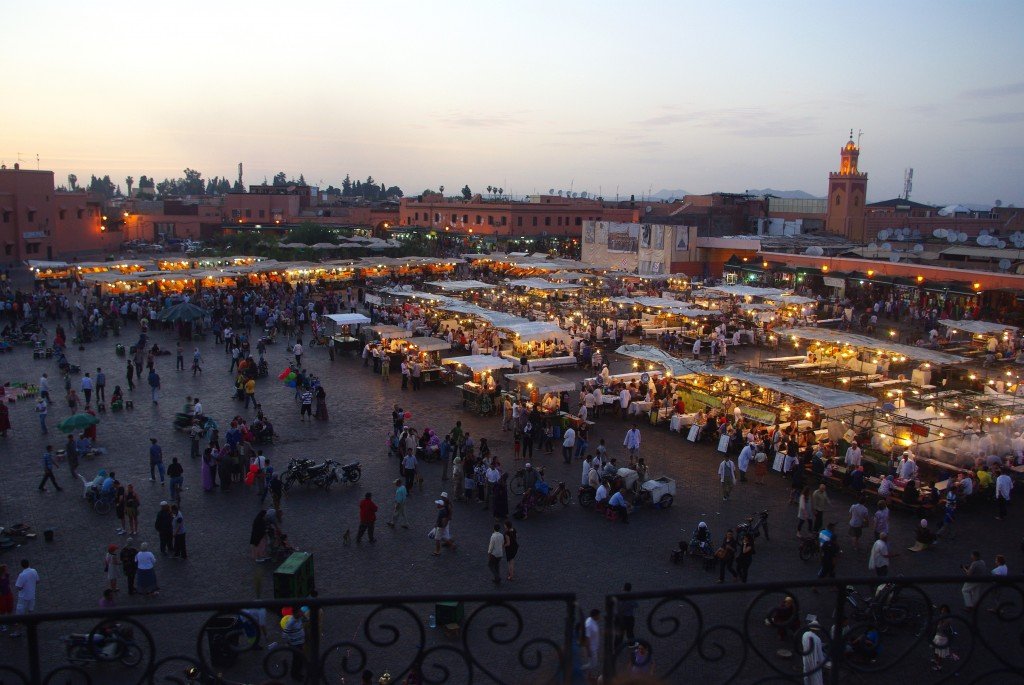 Once away from the food stalls, there are no overhead lights.  In darkness we walked from the Storyteller to the Magician, Trickster, and the Dove Act.  This Act made us laugh.  I think he was meant to be a Dove Charmer, or not.  He played music and his dove lifted it’s feet and walked on the spot in a small square on the ground.  For some reason everyone loved this act!  There was probably more to it than what we saw.

The appealing thing about Jemaa el Fna Square is that it is not just a show for tourists.  It is more of a show by Moroccans for Moroccans and it is world heritage listed for it’s cultural importance.  The reality that it is loved by Tourists just as much as Morrocans does not detract from it’s appeal.

After dark the view from above became even  more magical.  The 100 food stalls lit up, the smoke mingling with the lights from the stalls.

But enough looking from above – the time had come to rejoin the crowds and be absorbed by Jemaa El Fna.

2     Failing the above arrive late afternoon and watch the pace pick up.

3     Take a break at a rooftop cafe to enjoy the views and regroup.

5     Getting your photo taken with or holding a Cobra will cost more than you imagine.
[pinit] 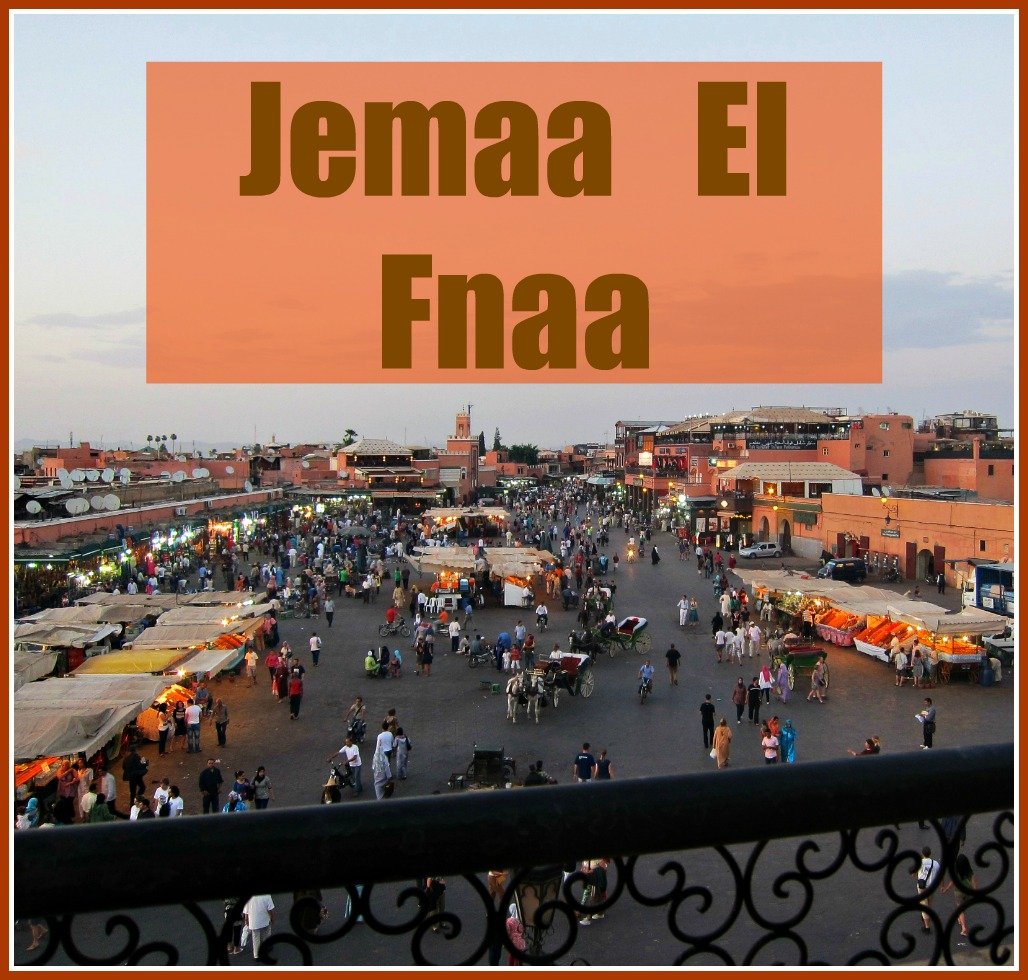