It might be obvious, but the first thing to strike me about Portovenere in Liguria, Italy, was the waterfront.  The local bus from La Spezia deposited us right beside the ocean, where I could indulge in my favourite past-time of  boat watching.  This area is known as the Bay of Poets, due to it’s popularity with English Poets Byron, Shelley and D.H. Lawrence, the original English tourists.

We boarded our bus in a one-way street in La Spezia and grabbed a seat, but after clearing the city limits we started seeing signs to Pisa and realized we were going in the wrong direction.  What to do?  We decided to go with the flow – maybe we were destined to go to Pisa today, not Portovenere.  Alas, not long after, our bus turned left and headed for the hills and away from both Pisa and Portovenere.

Our hopes of staying on the bus when it came to a stop at the small village of Casano (not the more well known Cassano) were dashed when the driver kicked us off the bus.  There didn’t appear to be much to see and we needed to stay near the bus, so we gravitated to the bar across the street.  Practicing our fledgling Italian we ended up with a cheese and salami sandwich and a Coke Light and retired to the shade of a nearby tree to keep an eye on the bus – it was not leaving without us.  After his break the driver was forgiving of our sins and allowed us to ride back to La Spezia,  and on to Portovenere  – all for our original ticket price.   A google search today reveals Casano’s  claim to fame as “the place from where a German battery fired on Carrara, in World War II.”

We may have arrived at our planned destination hours late, but it was with a story to tell. 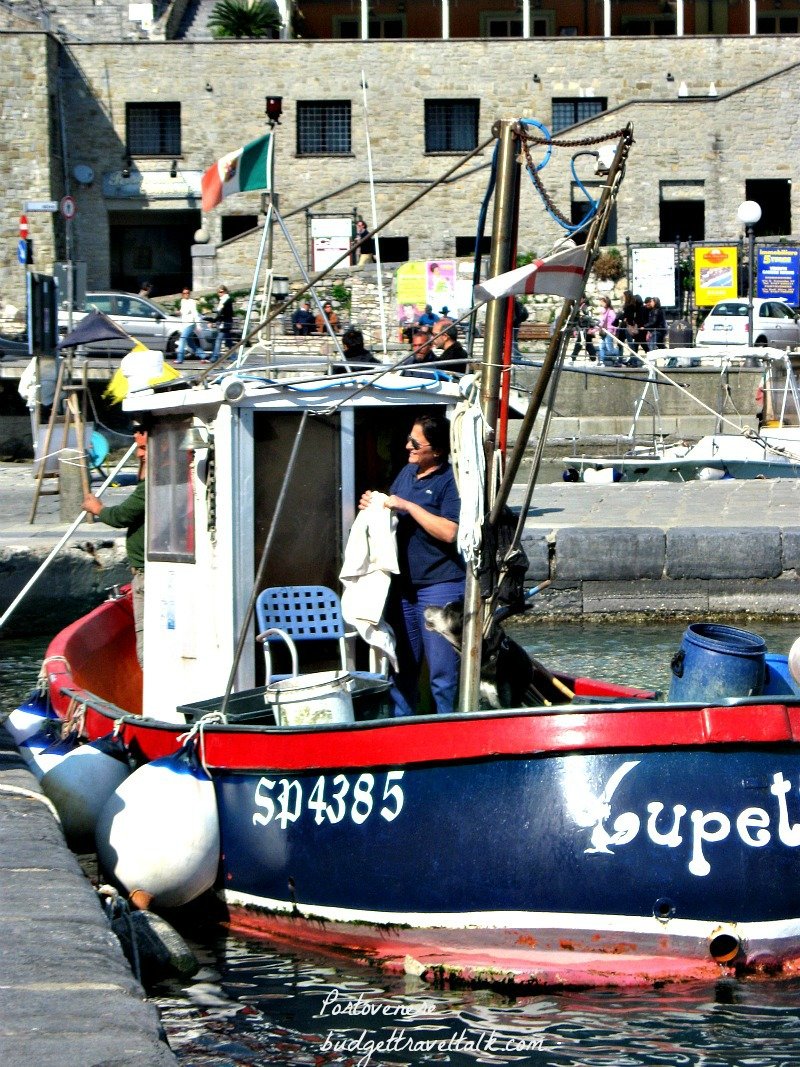 It felt surreal walking past the colourful houses that lined the waterfront, as if we were  in a living, moving, postcard. 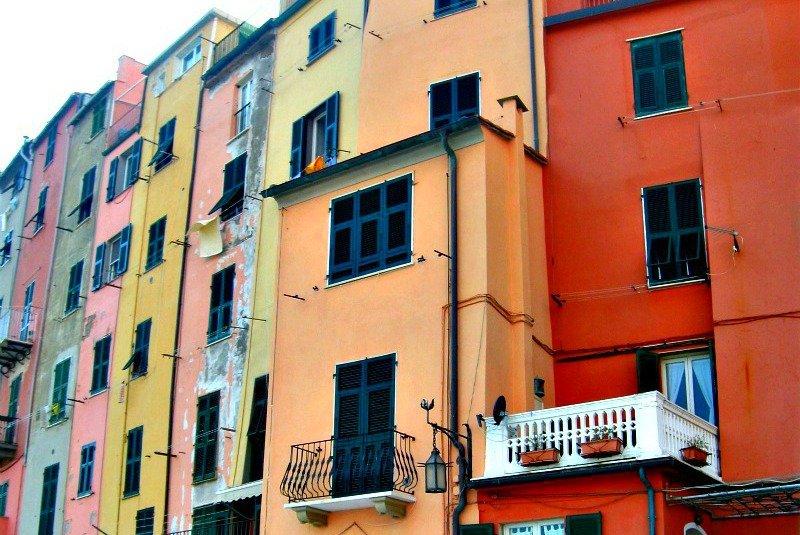 At the end of the promontory was the Church of San Pietro.  This was the first time I had seen a church with black slate and white marble stripes, and I liked it.  The Genoese built the church in the style known as gothic-genoese in 1256 – a gift for the people – after they took the nearby castle.

Back in the first century BC, there had been a pagan temple to Venus on this same spot – hence the name Porto Venere.  We have seen this same theme played out before, where churches, mosques or temples are built on the foundations of those from previous centuries. 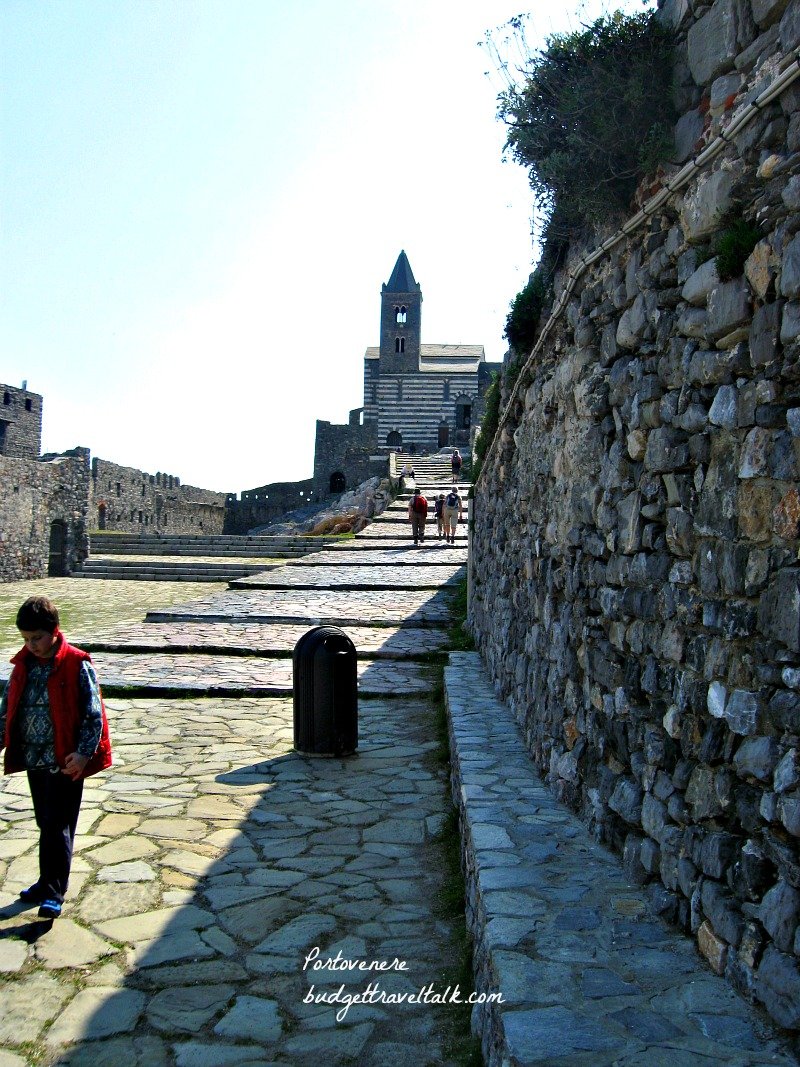 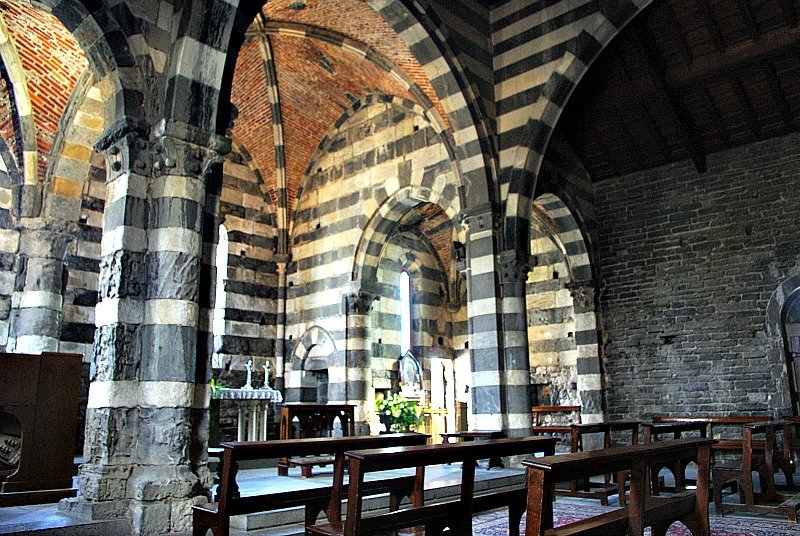 The views from the old arched loggia beside the church stretched out toward the Cinque Terre (translates to five lands/towns).  The five romantic villages perched on cliffs and shores to the north-west, together with Portovenere, were declared Unesco sites in 1997.  They can be visited by boat from both La Spezia and Portovenere. The boat stops at La Spezia, Portovenere, and then each of the Cinque Terra towns except Corniglia which has no boat access.  They are also accessible by regional train from La Spezia or Levanto.  Each of the five towns have their own train station and visitors’ cars are not allowed access. 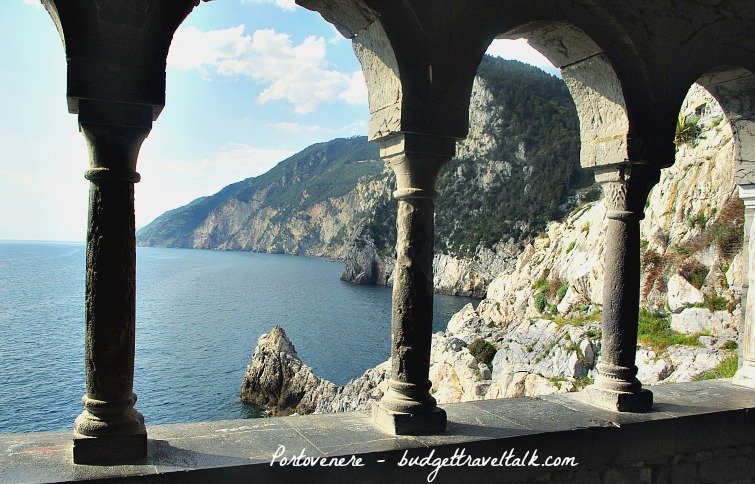 The photo below is taken from the Church of San Pietro.  The landmass on the right is Palmaria, the largest of three nearby islands.  Boat trips around the three islands leave from Portovenere. 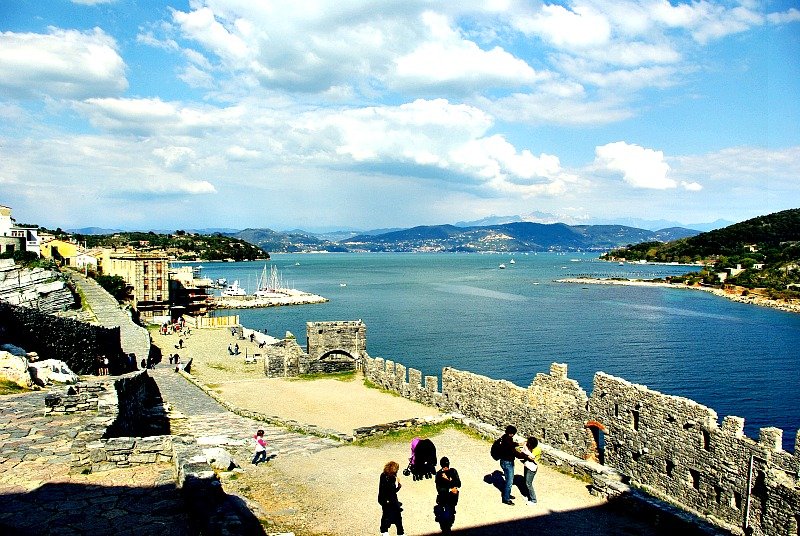 The gates to the medieval town can be seen in the middle of the photo below.  No cars are allowed within. 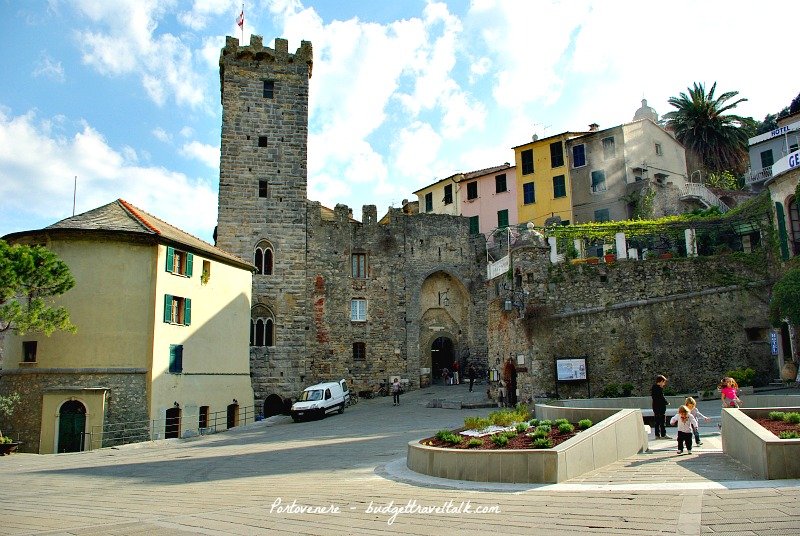 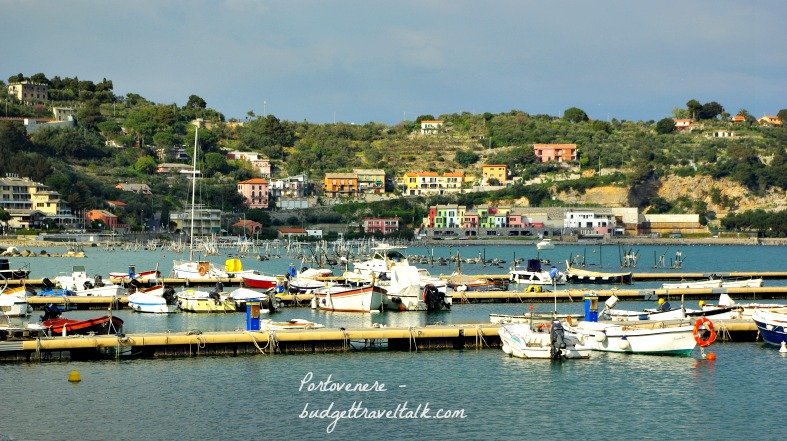 I would have liked to have been in one of the windows looking down, but had to be content with the view from the square below where I devoured my icecream. 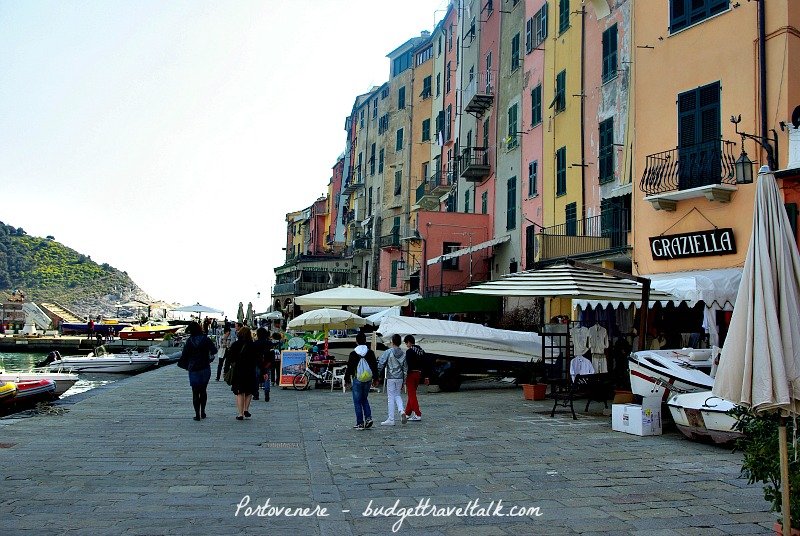 Portovenere, was a beautiful mix of boats and water, lanes and houses, and in April, was not very busy at all.  Away from the waterfront it was fun pottering in the medieval lanes that led up toward the Andria Doria Castle, which is open to the public in summer and houses art exhibits. 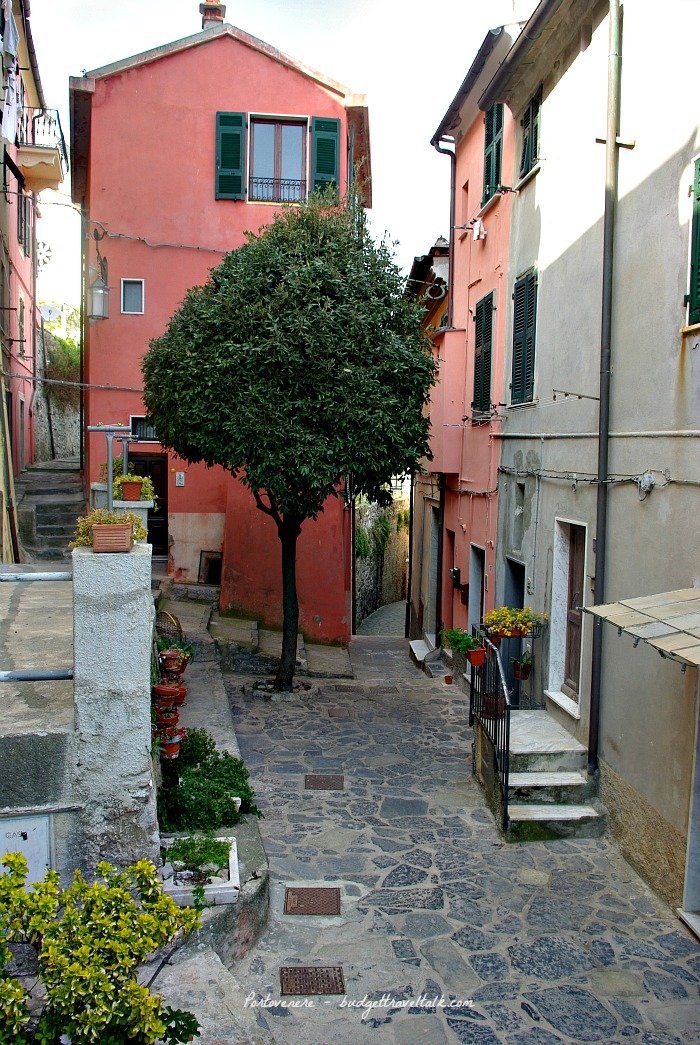 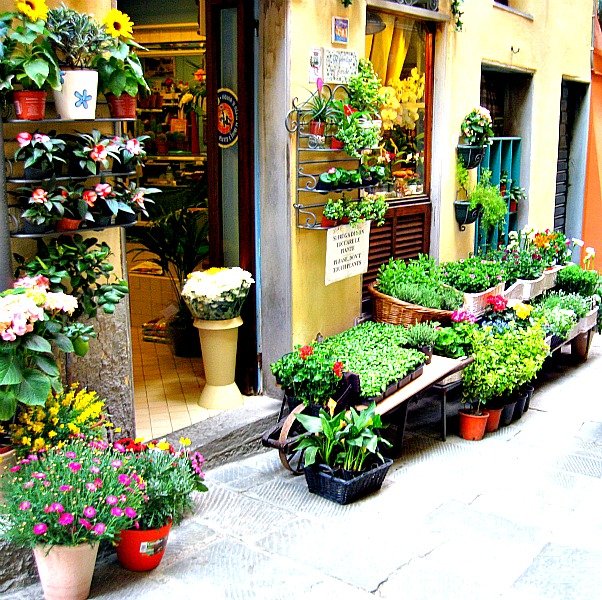 How to get there:

The boat from La Spezia to Portovenere and Cinque Terre is discontinued until Sunday 24th March 2013.

The bus trip (2 Euro) from La  Spezia to Portovenere only takes half an hour.  Check with the driver to make sure you are headed to Portovenere and not Casano, I have heard of others catching the wrong bus as well.

This post forms part of Budget Travelers Sandbox Travel Photo Thursday.  Click on the link for a mix of photographic posts from around the world.