Renting a vehicle is a good option for exploring Croatia and we picked ours up in Zagreb.  A little more than 100km south we came upon Rastoke, a historic town in the Croatian district of Slunj, which was to whet our appetite for the next day’s destination of Plitvice Lakes. I recommend that everyone who is physically able to visit Plitvice Lakes, but if you can’t, then consider Rastoke your own free sample.

Look behind this Rastoke waterfall and you will see more and more waterfalls.  It would be fair to say water is everywhere in Rastoke and that means lots of trees – Burr, poplars, aspen, willow trees, lime trees and alders.  These names are not familiar names to us in the north of Australia, although I do recognise the Poplars and Willows.

Spring in the north of Croatia is an overload of green. 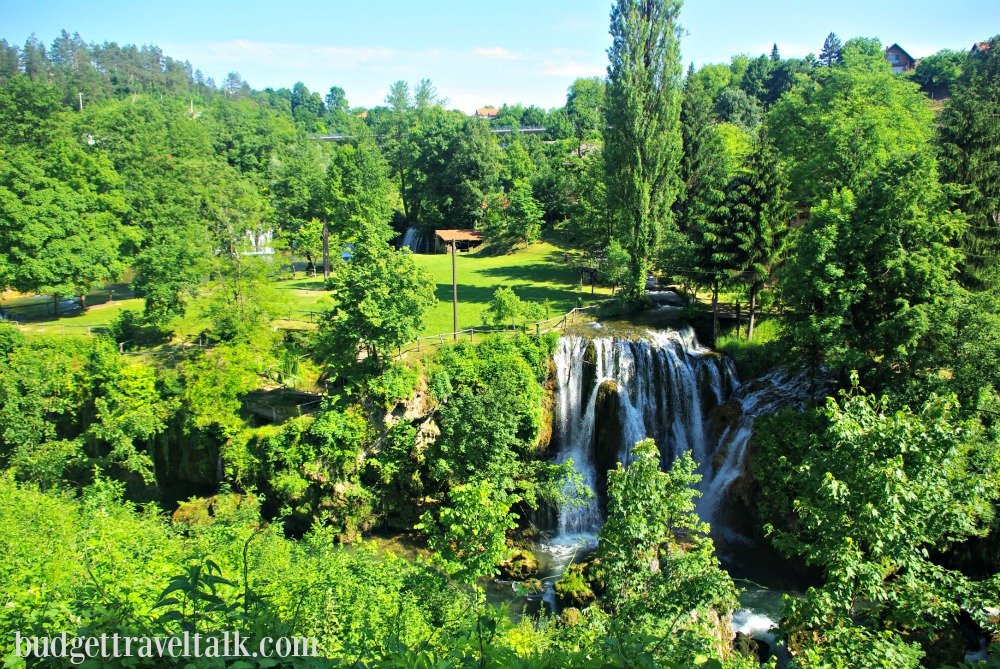 The Slušnica (Slunjčica) and the Korana rivers meet here and traditionally mills were set up to use the abundance of water.  Where the rivers join, a travertine rock face 500 meters wide and 200 meters formed creating 20 or more low waterfalls no higher than 20 metres and a series of rapids and pools. Otters live in crevices in the travertine so keep your eyes peeled. 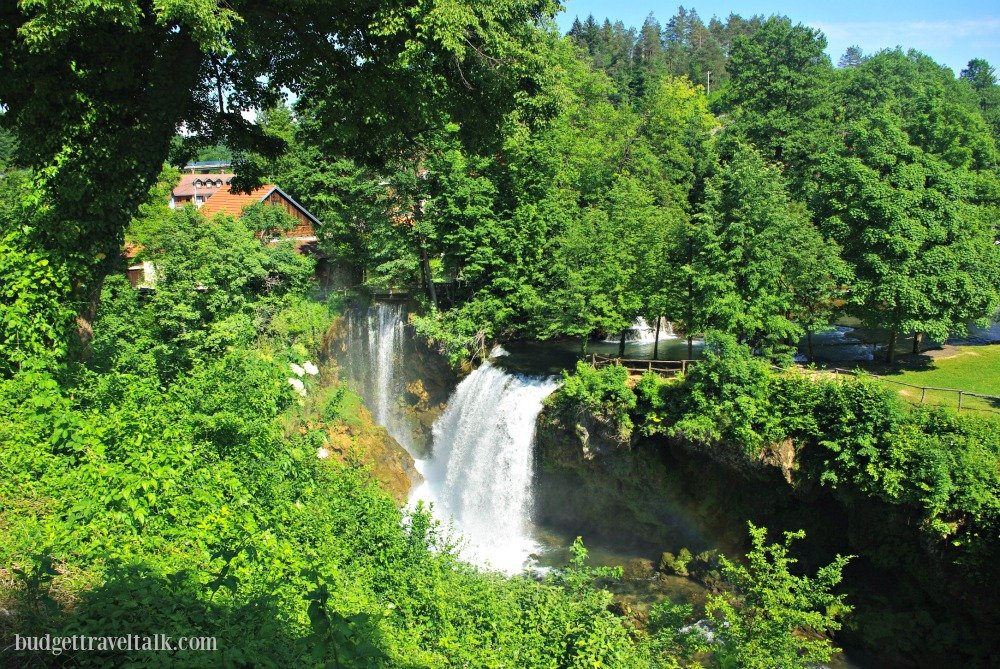 The Slušnica river flows underground for 20km before reaching Rastoke.  While it barely reaches a high of 16 degrees C, the Korana reaches 28 degrees C and the joining of the two covers parts of the town in fog.  The cool waters are perfect for growing trout for which the Slušnica is famous.  Local restaurants serve river trout as well as the local speciality of roasted Pork and Lamb, that can be seen cooking in roadside ovens from Istria to Plitvice and beyond. 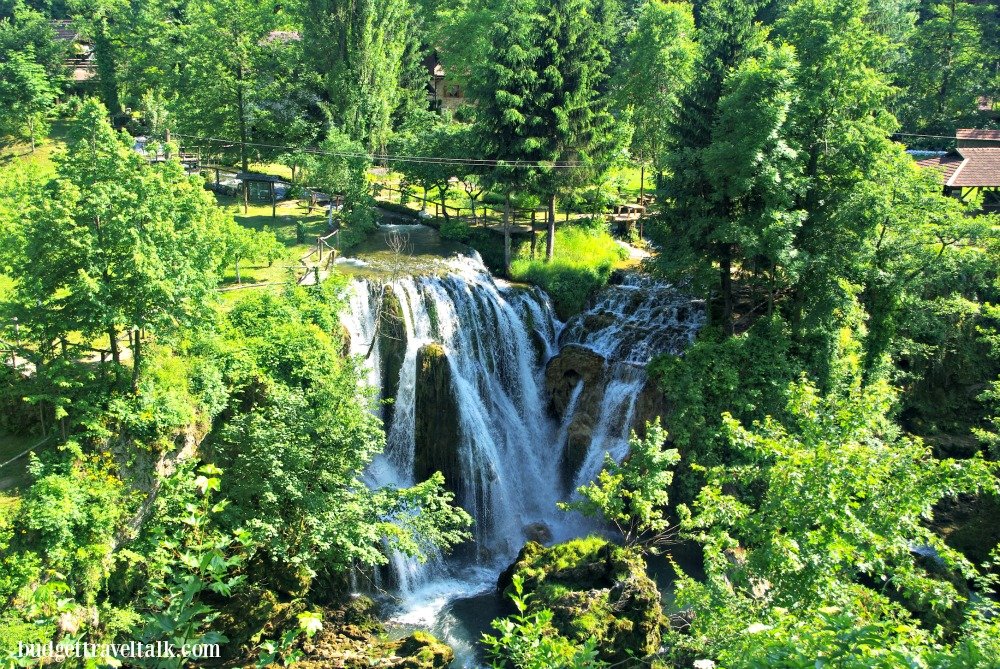 In Croatian the word rastoke has dual meanings. One meaning is the branching of rivers and another is the rock known as Tufa or Travertine. The very nature of the travertine has created problems in the past.  In 1914 the Korana undercut the rock face and in the middle of the night the town dropped.  I can only imagine how terrifying that would have been. 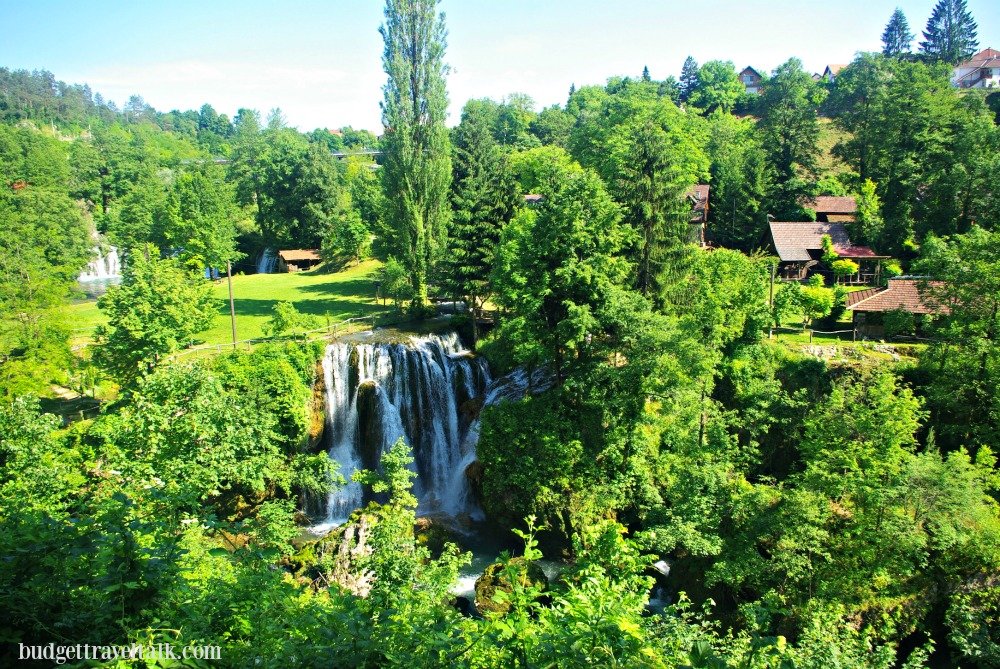 Buk waterfall was purposefully damaged by explosives during the Croatian War 1991-5. 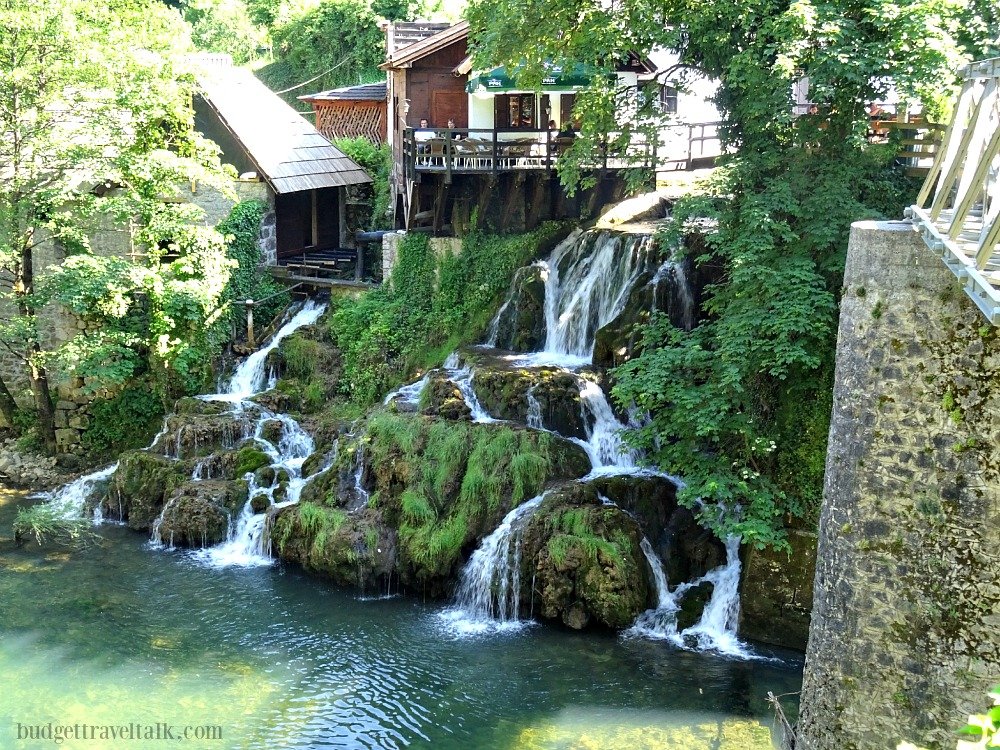 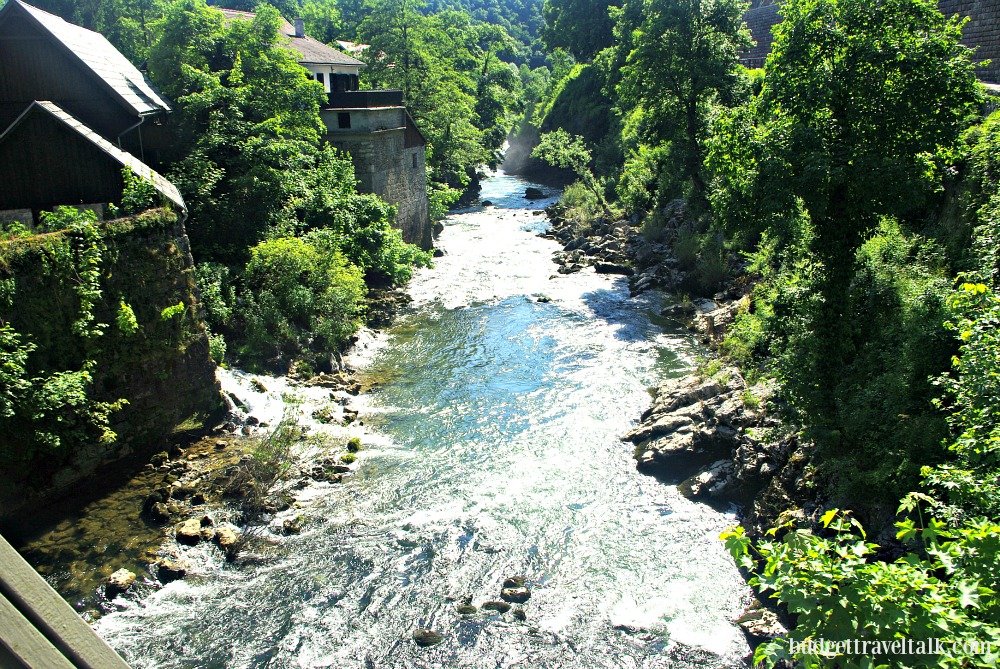 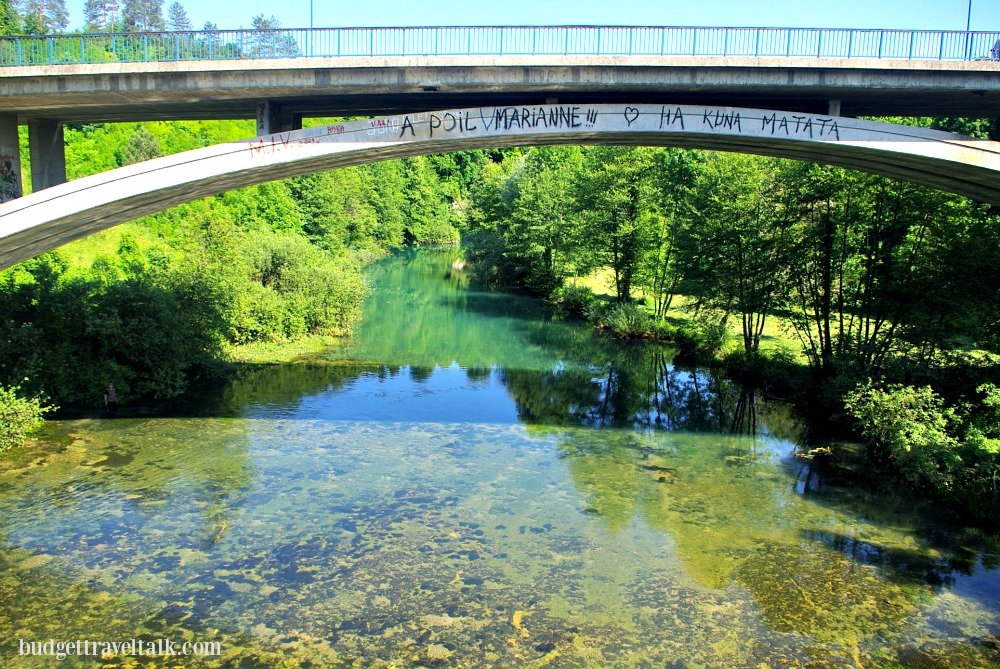 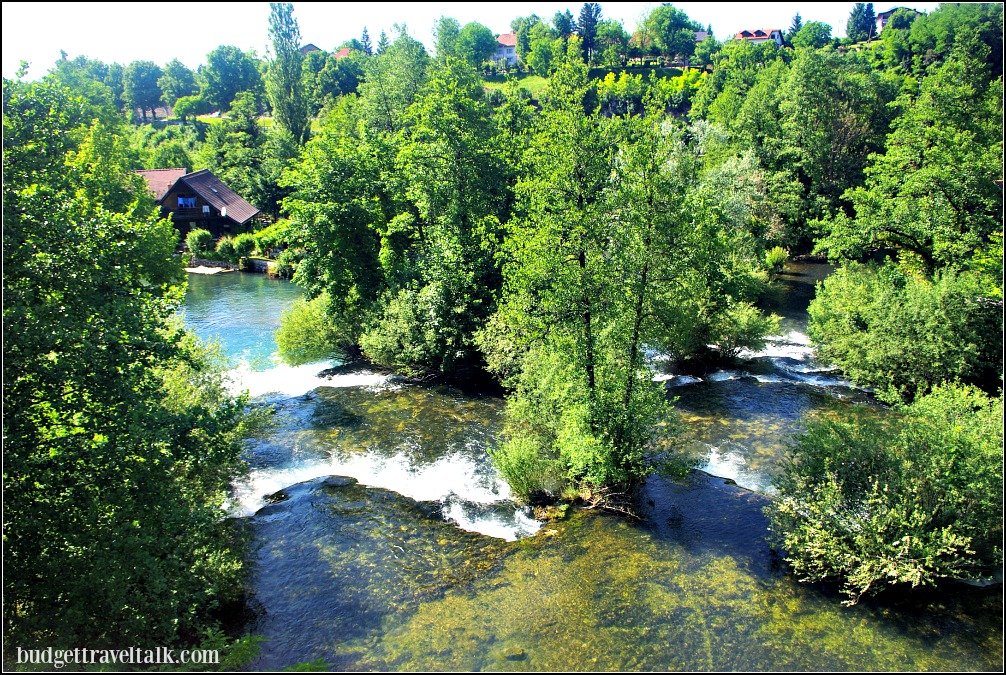 An attempt was made to destroy this bridge during the War but it was only minimally damaged and opened again within months.  Unfortunately some of the century old houses were damaged and/or completely destroyed. 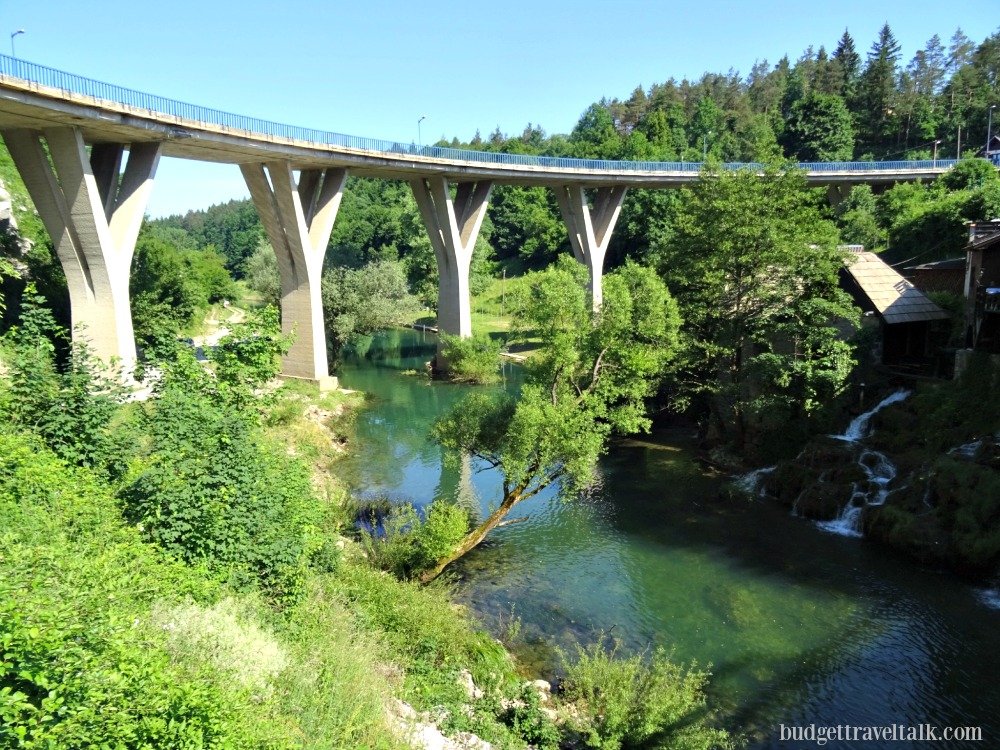 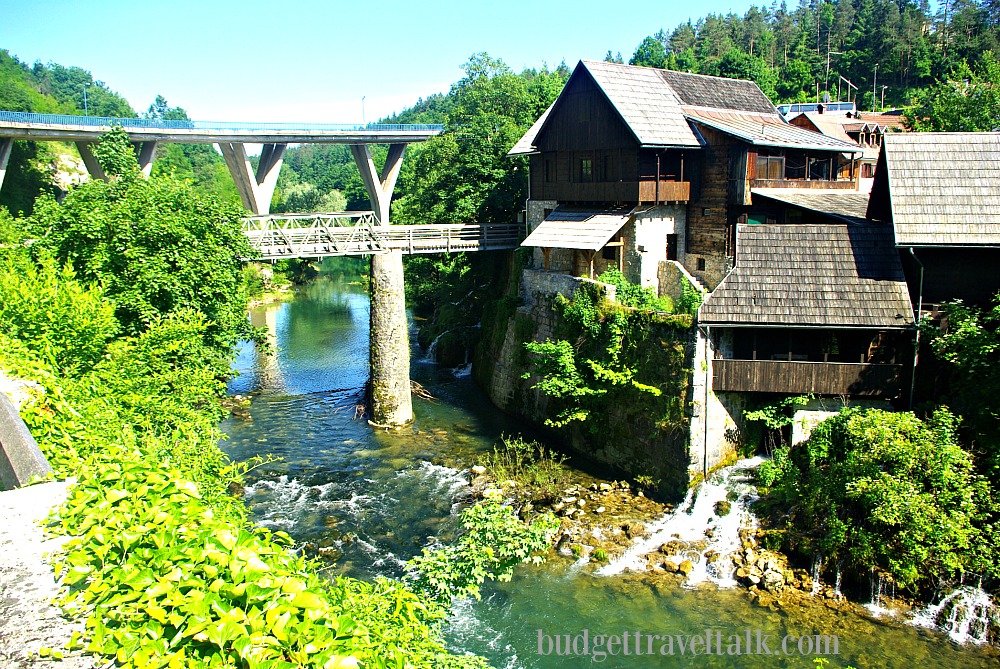 The locals of Rastoke rent out their rooms.  A search on Airbnb revealed quite a few.

Petro Restaurant with views of the river, fresh trout from the river (via a tank on the deck).

Swimming, canoeing, rafting (summer only). Nearby Caves of Barać.

Turn left off the road from Zagreb and park along the river. You can see the Blue Parking sign at the top of the map below.  Although there are other parking areas this is the most convenient if driving from Zagreb. 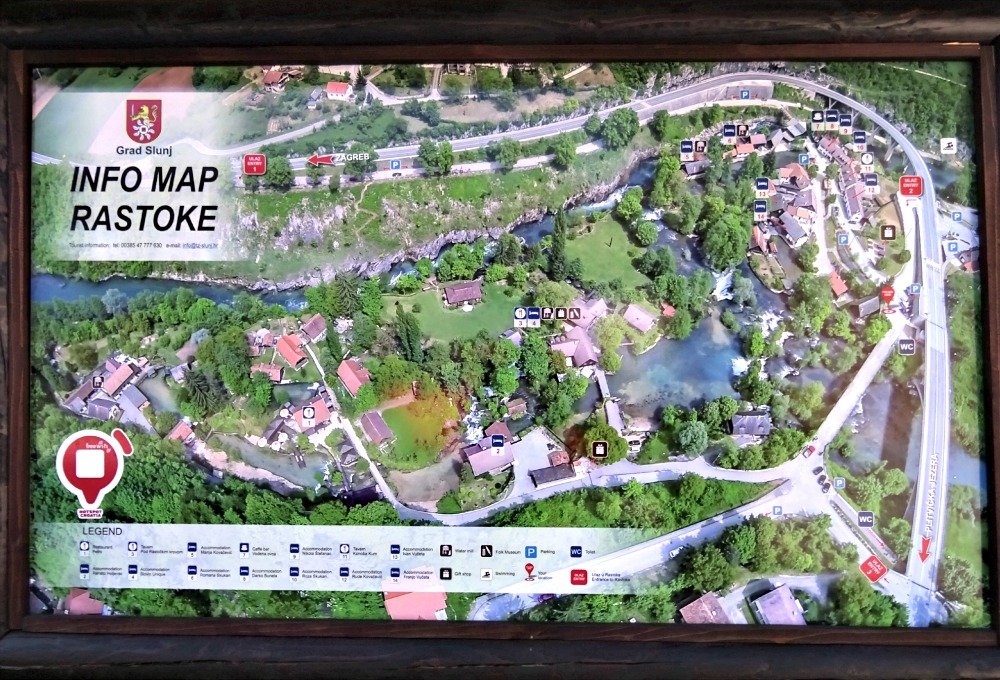 Every Thursday I link to Budget Travelers Sandbox for Nancie’s Travel Photo Thursday.  You can add your link below and read stories from all over the world.