Rustem Pasha, Istanbul’s hidden mosque, is a delightful find and if I were to live in Istanbul I know it would draw me back time and again. 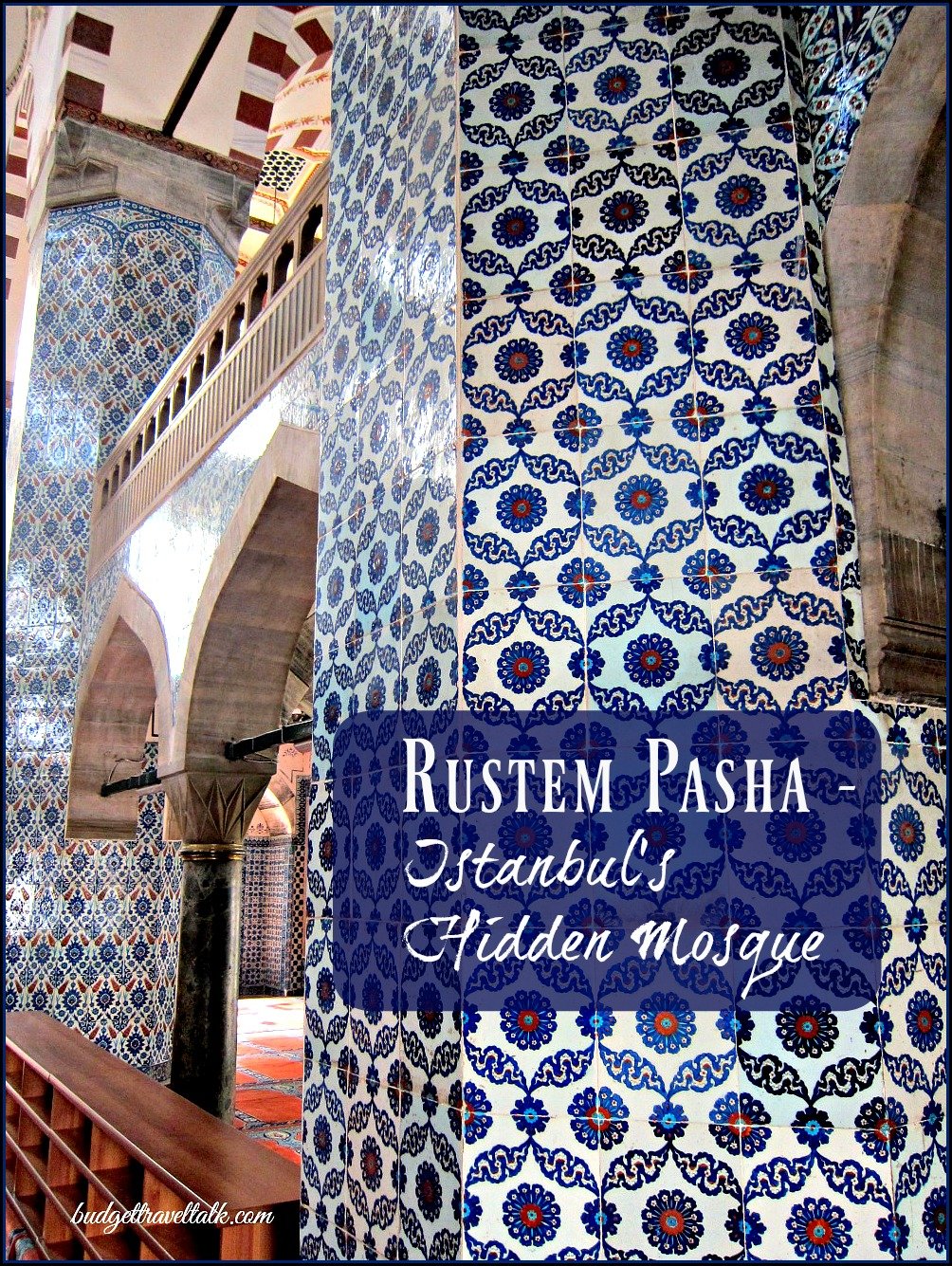 Following an effortlessly balanced tray of simit, we squeezed down Hasircilar Caddesi, a street that comes to life on the edge of the colourful Istanbul Spice Market, Misir Carsisi. 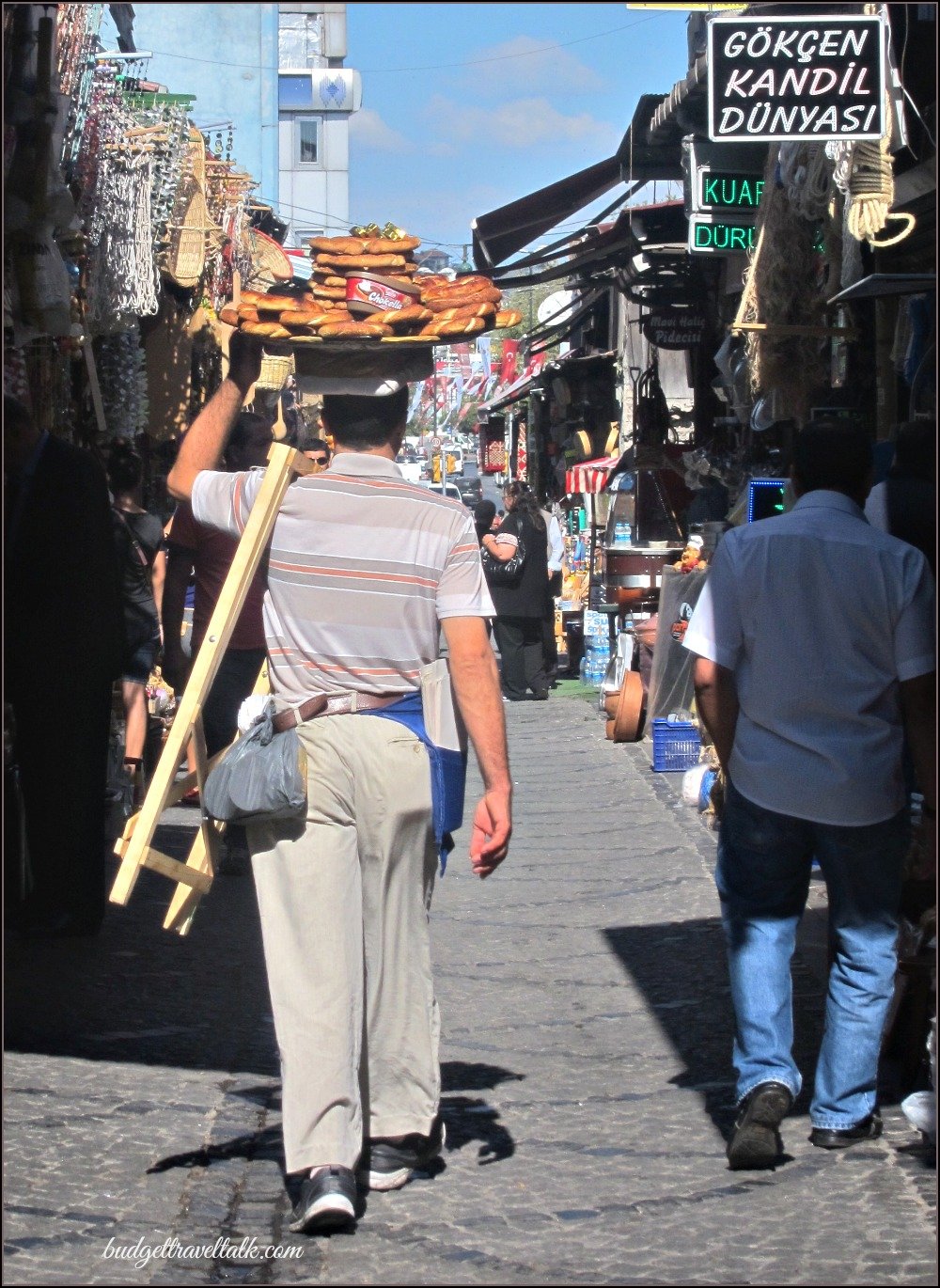 Somewhere in that street, between the stalls selling timber and cane wear, pots and bling, lies the hidden entrance of the Rustem Pasha mosque. Hidden because the mosque is set back a little and built above vaulted shops that hide it from the street below.

Sometimes it is necessary to dive into a shop entrance to let market traffic through the space challenged sreet. 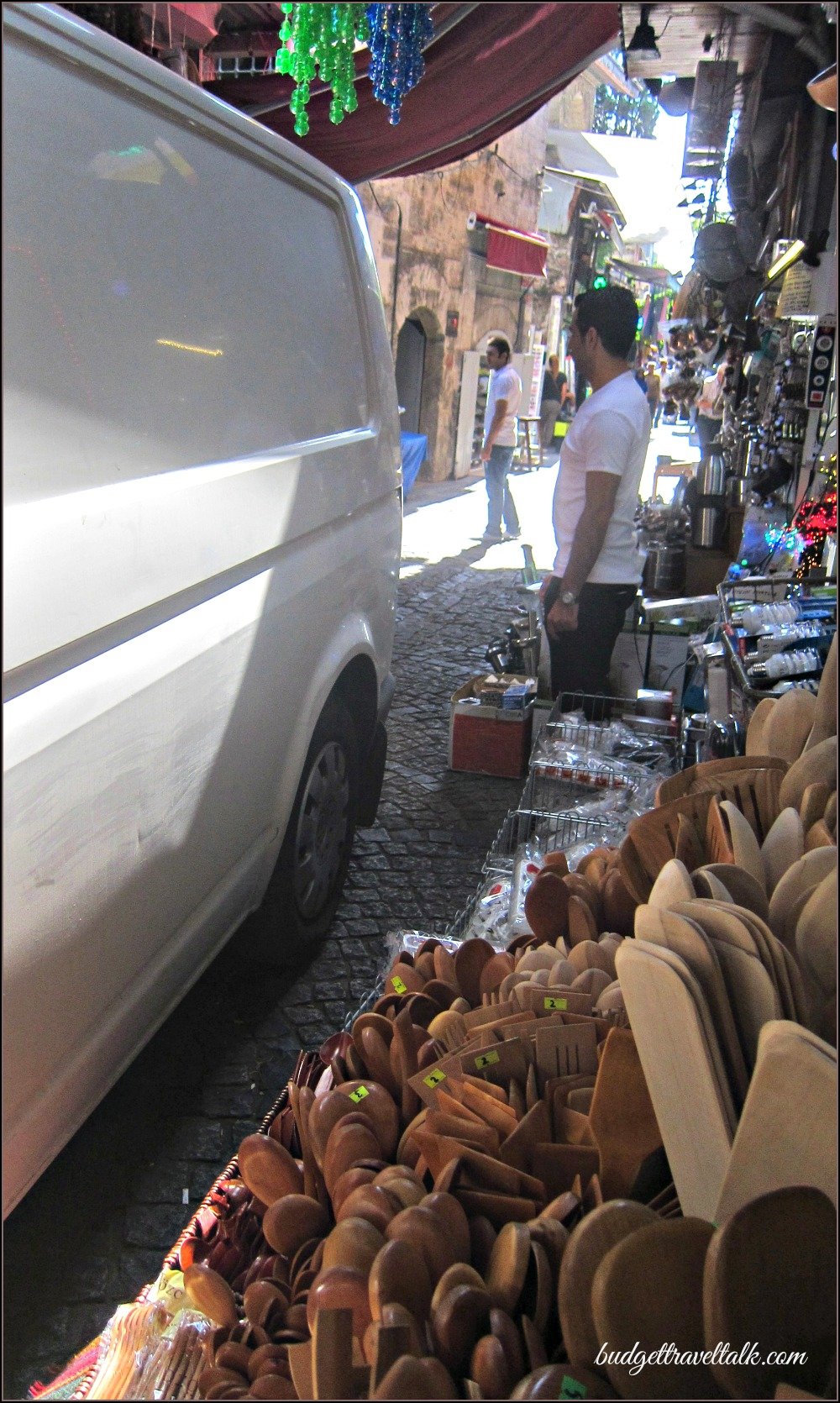 Less than five minutes after leaving the Spice Market we spy a doorway on the right. Could this be it? Climbing the stairs and reaching a terrace, we were still not sure – then we turned and saw the five domed portico and knew we had arrived. 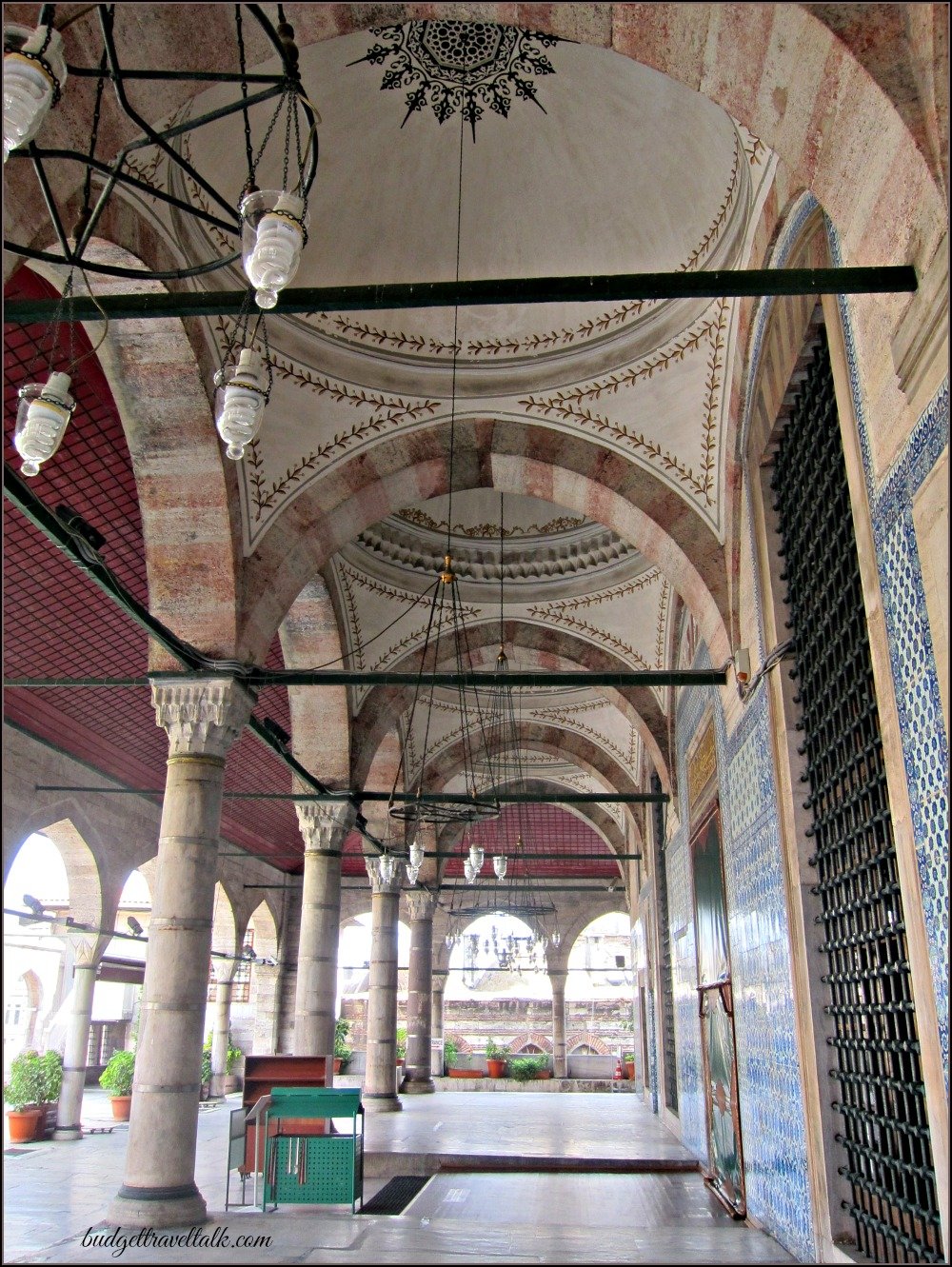 Rustem Pasha to whom the mosque is dedicated, was son-in-law to Suleymaniye the Magnificent and his Grand Vizier – the equivalent of a modern day prime minister. After his death in 1561 work began on the mosque.

One point of view suggests that even though he was extremely wealthy, his mosque could not be placed in a position to rival that of his employer.  Hence it’s position hidden away in the market area, at the base of the very hill that the Suleymaniye Mosque dominates.

Rustem was born in the Krka river port of Skradin in Croatia and lived there until he was six years old. You can read our post on Skradin HERE. 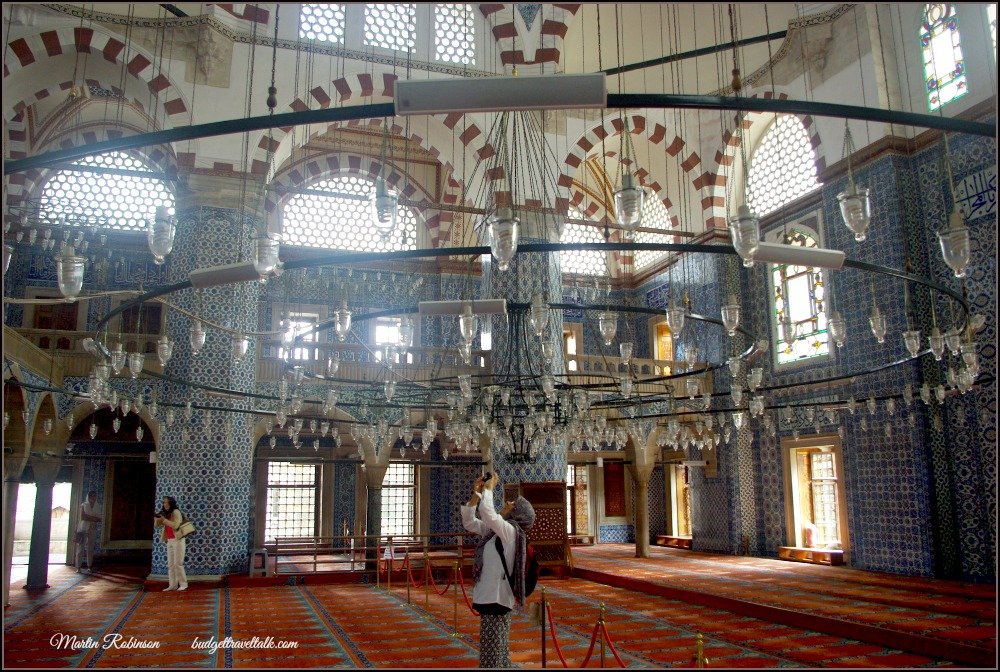 The circular rows of lights suspended on high, hang low over the carpeted prayer area, providing equal light for all worshippers.

I was intrigued by those rings of glass lights and noticed they contained energy saving globes. In 2008 the Turkish Religious Affairs Directorate ordered 895,390 energy efficient bulbs to be fitted in 80,013 mosques leading to a 65% energy saving. I wonder who supplied that many bulbs! 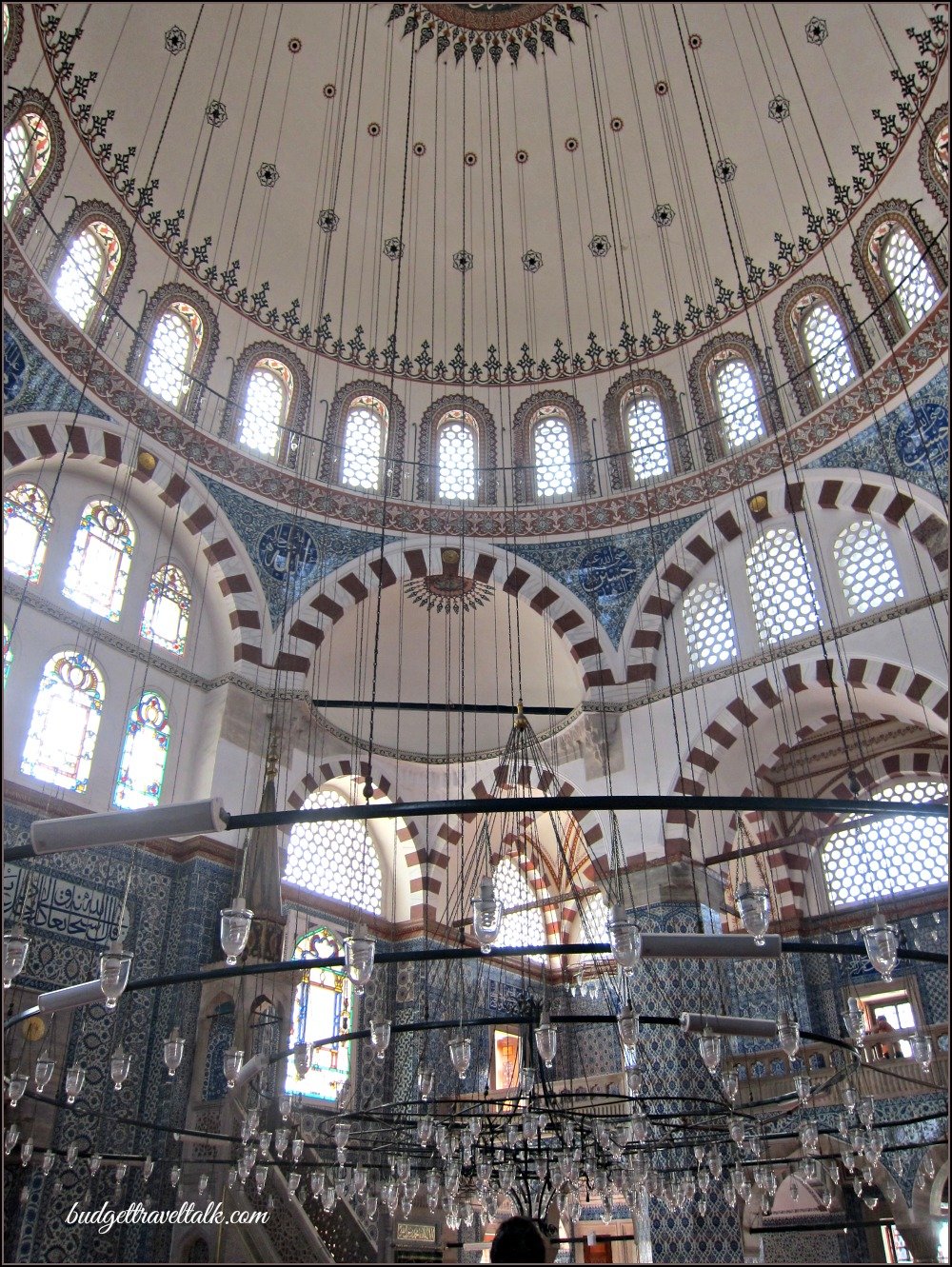 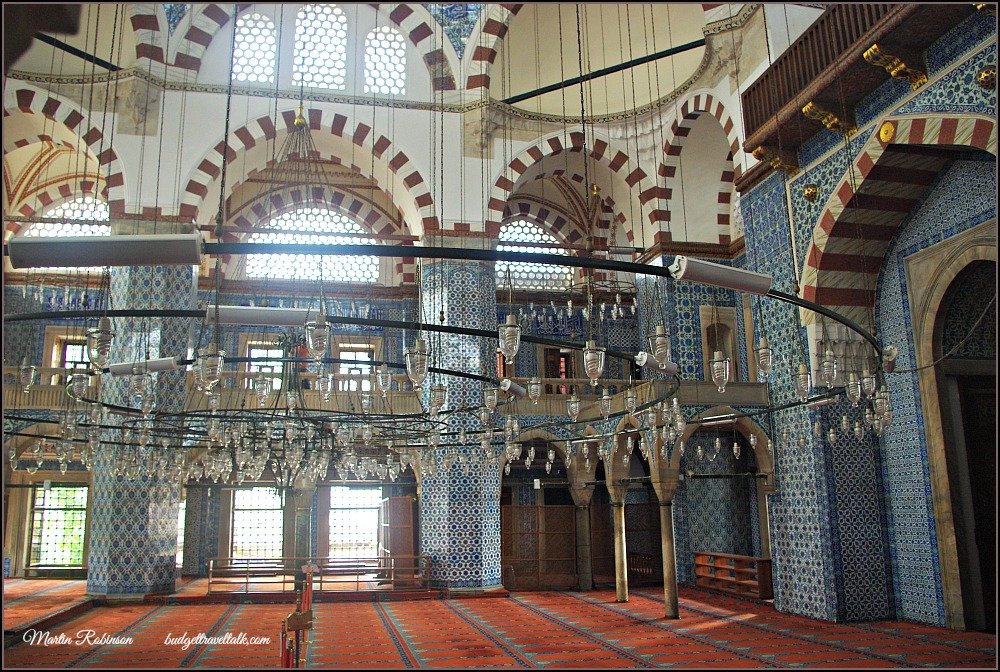 Mimar (Architect) Sinan was an enormously gifted and popular architect and although the mosque he designed was small, the interior and exterior were decorated with 2,300 tiles from the town of Iznik on the banks of Lake Iznik 90km south-east of Istanbul as the crow flies. Although the majority of the tiles were blue, they included red – considered very hard to achieve by tile makers of the day.  The collection also contained purple and sage green tiles from the earlier “Damascus Ware” period. 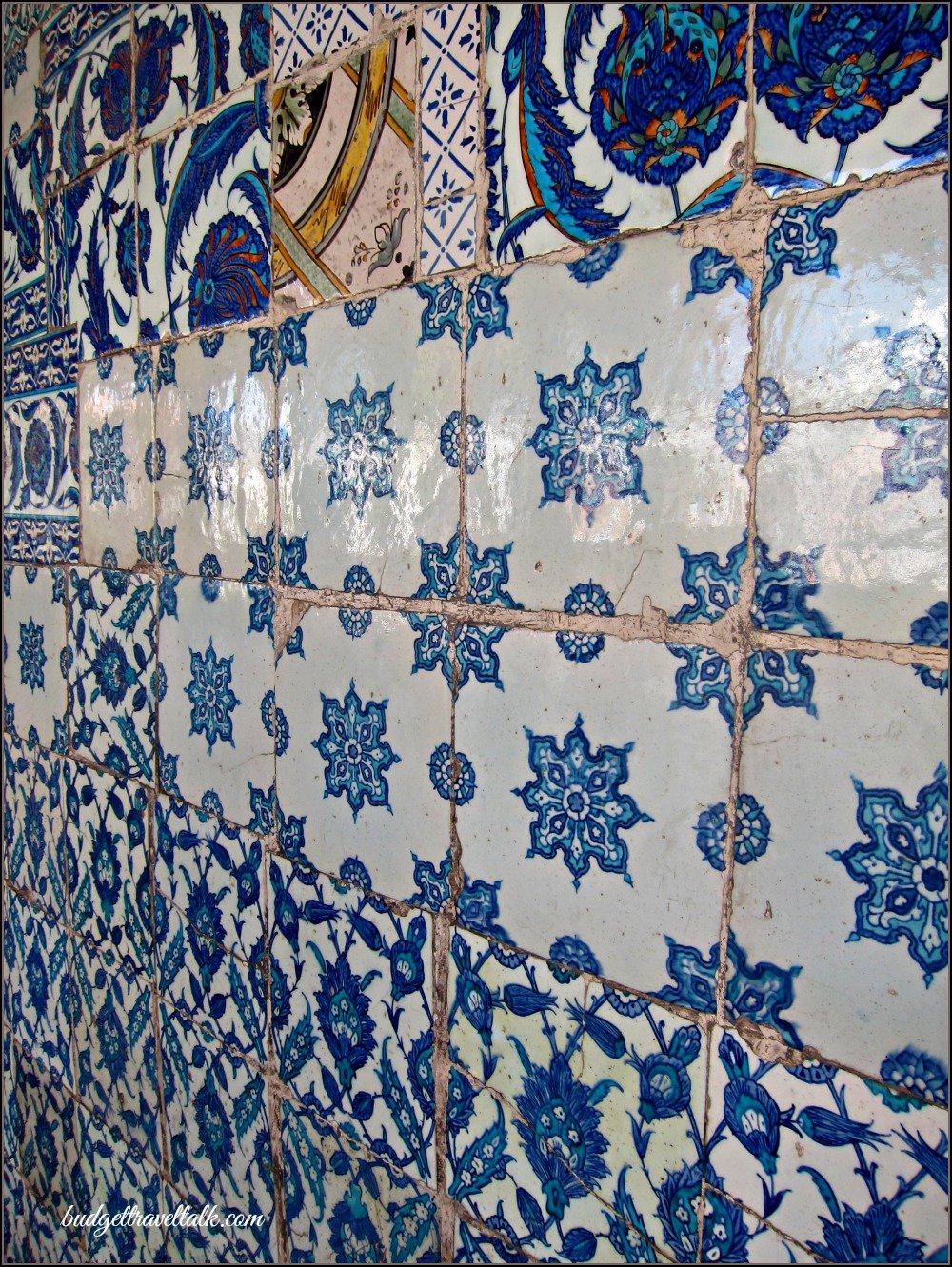 The Tulip flower is depicted on everything from pottery to carpet in Turkey and we purchased a pottery plate with delicate painted tulips from Avanos, in Cappadocia. 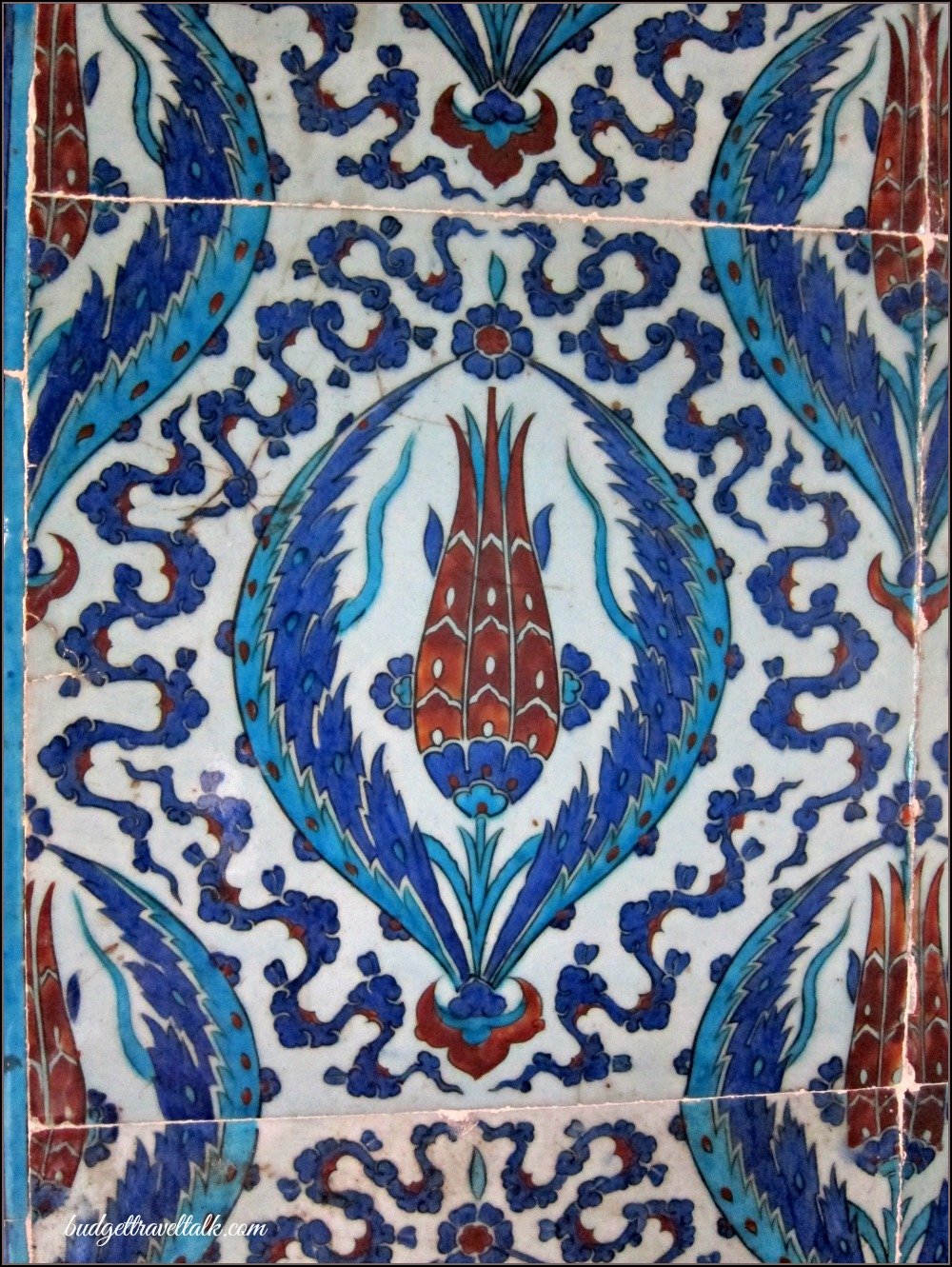 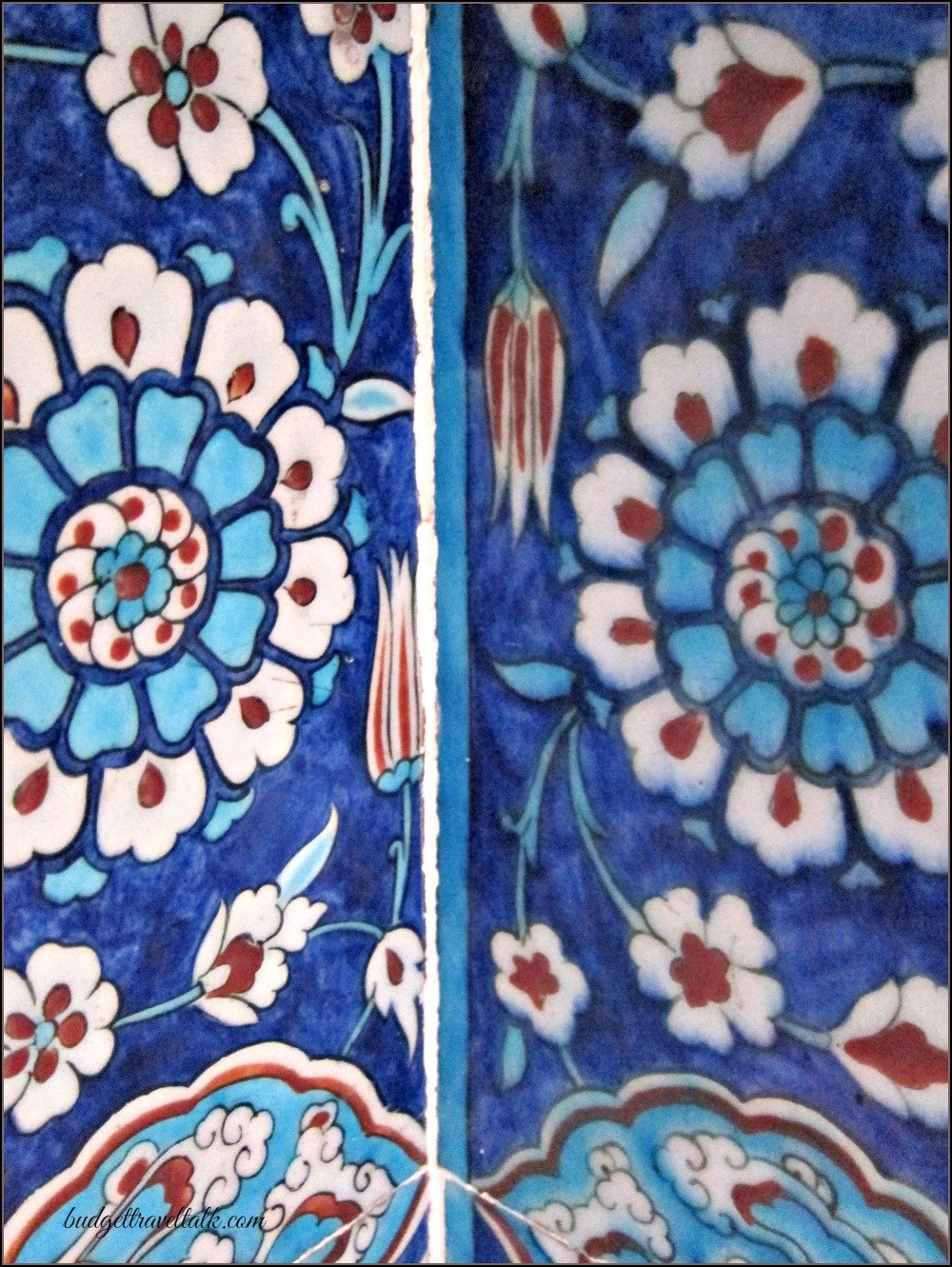 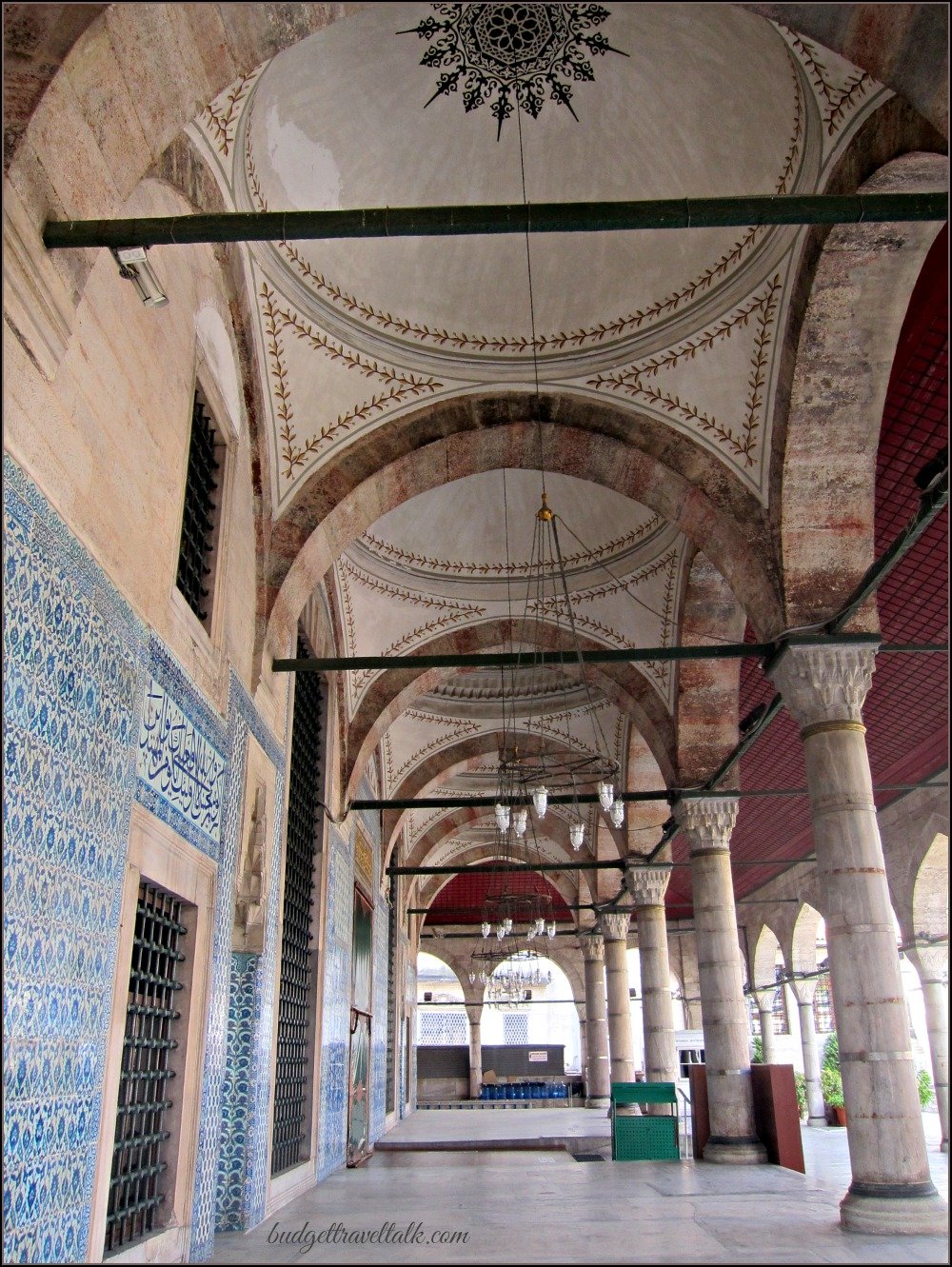 What Rustem Pasha’s mosque lacks in size and position is more than made up for by it’s exquisite tile collection.

This mosque is where I find myself, when daydreams lead me back to Istanbul.

I was in awe of the grand Blue Mosque and the monumental Hagia Sofia, but I fell in love with the quiet tiled mosque hidden away in a busy market street.

Another view of the Mosque peeking above the surrounding buildings. 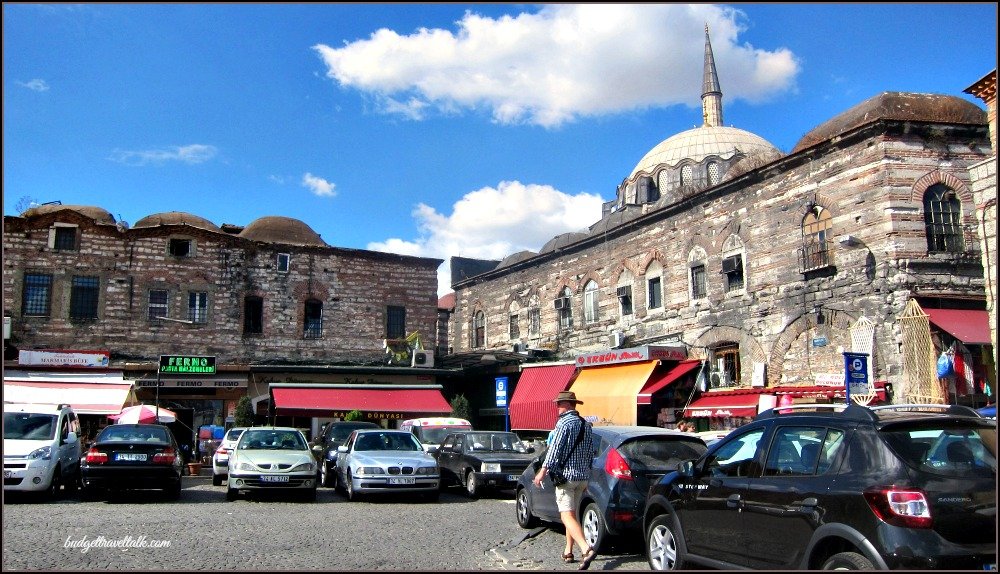 There is no doubt that Rustem Pasha is an alluring mosque, but history tells us that Rustem Pasha the man was not.  His nickname of “The Louse of Fortune” alluded to the fact that on the eve of his marriage he was discovered to be crawling with lice, while his fortune was said to have been boosted by bribes.

The mosque can be visited anytime except during prayers.  Prayer times vary with the season but basically correspond with Dawn, Mid-day, Afternoon, Sunset and Last Light.  The main entrance in the middle of the front portico is used at prayer time.

For the tourist entrance continue to the far end and turn right, where a mosque attendant will direct you.  The roped off and signed area is strictly for prayer.

A visit to Rustem Pasha Mosque could be combined with the New Mosque, The Suleymaniye Mosque, the Spice Market and the Grand Bazaar.  As the Grand Bazaar and Suleymaniye Mosque are on top of a hill it would make sense to begin at the top and work down.  We chose to visit Rustem Pasha first, even before the Blue Mosque and it proved to be a wonderful introduction to the land of Turkish mosques.

Transport. The Spice Bazaar, New Mosque and Rustem Pasha Mosque are within easy walking distance of the transport hub of Eminonu on the southern end of the Galata Bridge.  Ferries, Trains, Trams and Busses all have stops at Eminonu.

Nancie from Budget Travelers Sandbox is hosting Travel Photo Thursday where she has some crazy fantastic photos of the Chinese Opera in Penang.

Hierapolis Photos of the Holy Spa City
Next Post: Ten Reasons Plus One to Visit Istanbul