Updated Jul 2018. Arriving from Hanoi to Sapa Vietnam in April can translate to mist so thick it is difficult to see more than a metre. If you have come to Sapa to photograph the rice terraces this is not good news.

But this kind of Sapa weather is a draw card itself. 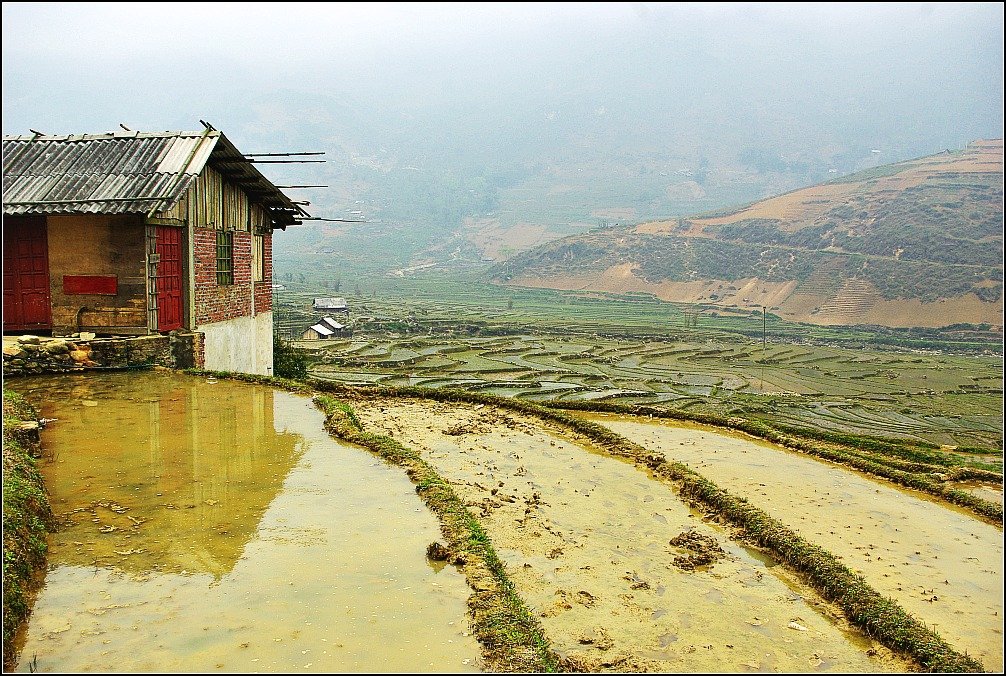 The popular overnight Hanoi to Sapa Train, can also be taken by day, costing $30-$35 one way to Lao Cai, the nearest town to Sapa.  On arrival at Lao Cai train station several mini-buses were waiting to take us on the hour trip to Sapa ($4 in 2018).  We chose one that was nearly full, as we had heard stories of passengers sitting in buses for an hour or more, waiting for them to fill. 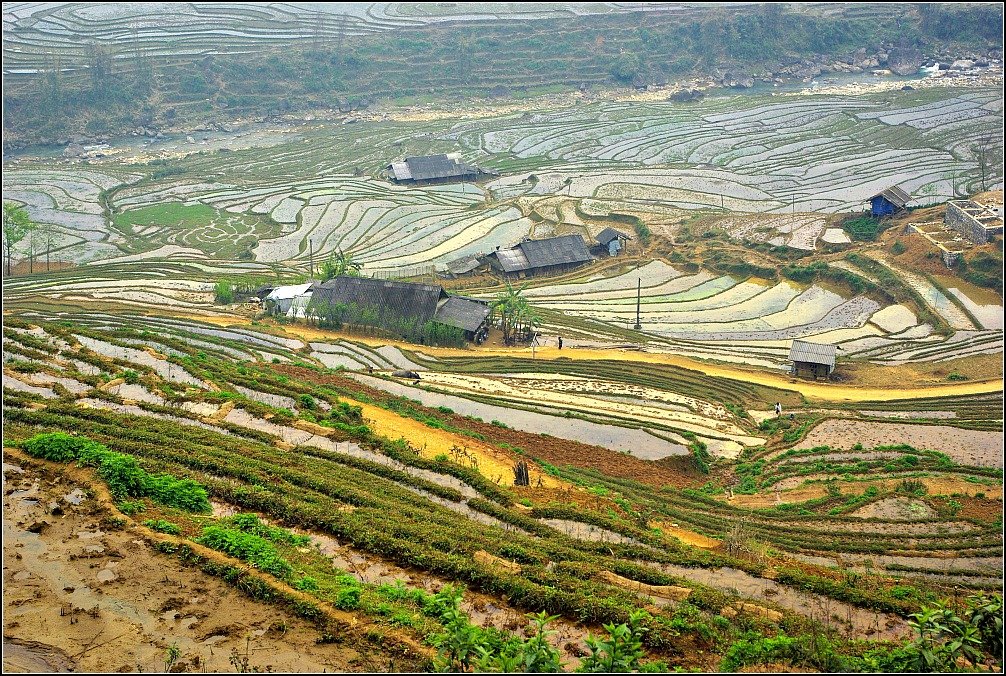 There are different types of trains from Hanoi.  We had soft sleepers in a local train.  Local trains are not as luxurious as private trains, while the terms Soft and Hard have nothing to do with mattress comfort. Standard through Vietnam, a soft sleeper means four bunks to a carriage, and a hard sleeper six.  It wasn’t easy booking a night train only a few days in advance and I suggest booking a week ahead if possible. There are two train stations in Hanoi, the correct one being Tran Quy Cap (Hanoi train station B). If you have a voucher hand it in at the counter of your train company. Don’t give it to any “helpful” locals as it could be a scam.

Later we discovered it would only have cost a little more (2018 price $38) to purchase a soft sleeper in a luxurious private train. Don’t you just hate that.

Best Train from Hanoi to Sapa?

Try one of these: 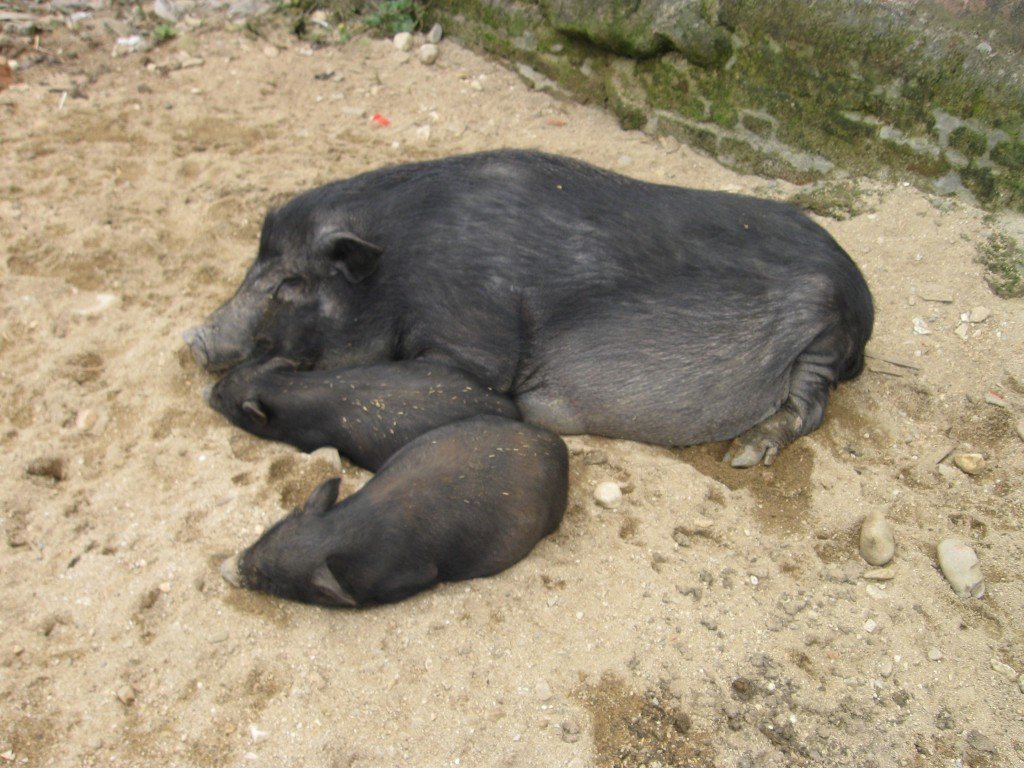 At Lao Cai station, still half asleep, we negotiated a somewhat inflated price for a bus ticket, boarded and as the bus was full, departed immediately. The mist was thick even at the lower levels and I hoped the driver could see more than we could!

Seated at the rear of the bus, both Jake and I started feeling ill as the bus climbed and turned in the mist and we hunted unsuccessfully for travel sickness pills. Although several passengers were physically sick, opening the windows did not appear to be an option. Urgh!

Keep travel sickness pills in your pocket and have water with you, or even better take them before boarding if you are at all susceptible. 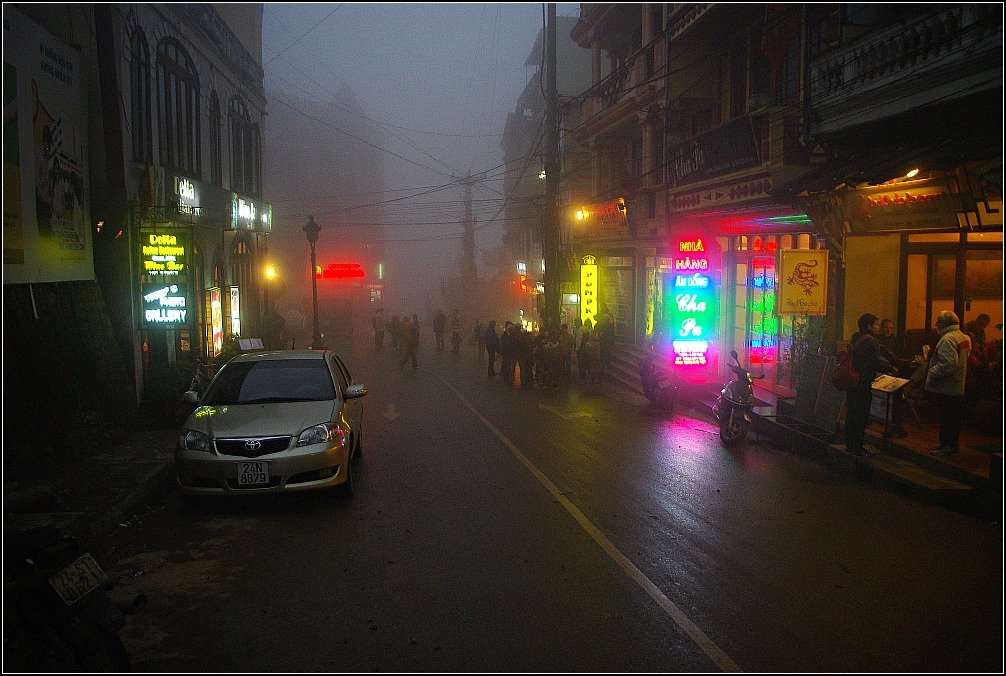 Where to Stay in Sapa

Confusion over two hotels with nearly identical names led to us being dropped at the wrong one at the top of town. The three of us and a new friend Dom, ventured downhill in the pre-dawn mist.  Dropping Dom, at the Dreams Hotel, we continued on to the Green Valley Hotel at the other end of town.

Although we felt guilty arriving at such an early hour, our hostess answered the door promptly, took our passports (common throughout Vietnam), booked us in and showed us to our rooms.  The hot showers and beds with electric blankets were welcome, as the room itself had no heating.

At $10 per night double we weren’t complaining and promptly fell asleep. Whenever we returned to the hotel I immediately got into bed!

The up to date (2018) price for this hotel is $26/night so I would probably try elsewhere next time.

Check your hotel has heating before booking. 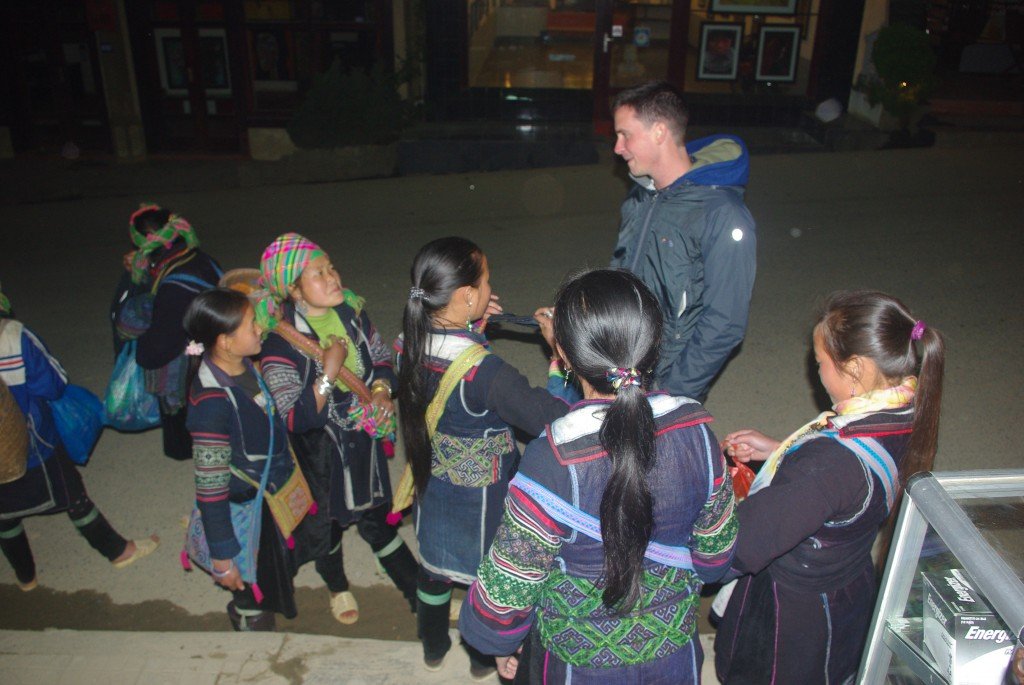 The ladies of the Black Hmong (an ethnic group originating from China who wear traditionally died black clothes)  have a sixth sense or maybe insider information about new arrivals to town. As we stepped outside the next morning we were greeted by eight ladies who serenaded us with a plaintive, “You buy from meee?”

Although it took some adjusting to, they were a friendly crowd and loved to chat as they accompanied us around town.  They worked from early in the morning till late at night looking for custom or embroidering in large social groups.

Whenever I tired of their hard sell, I reminded myself that their earnings supported their families back on the farm.

Although the Black Hmong are the most common ethnic group in Sapa there are also Flower Hmong who mostly live around the market town of  Bac Ha. 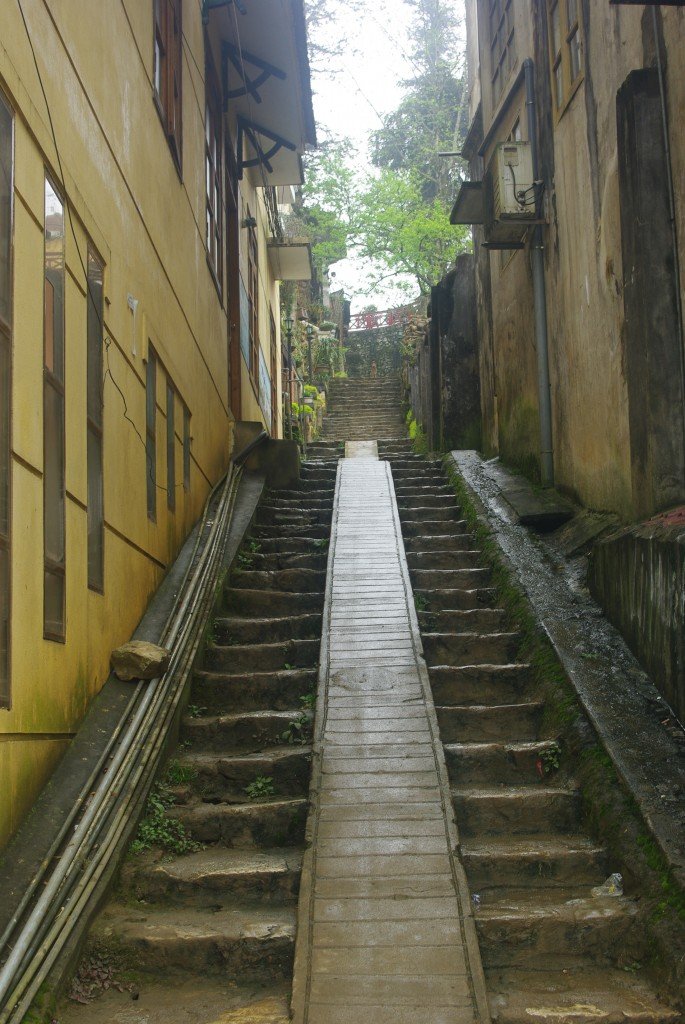 Where to eat in Sapa

Climbing the steep staircase to Baguette and Chocolate, for breakfast we noticed our followers remained behind but as we ate, but a new vendor appeared miming at us through the window, with strings of jewellery. Seems like we’d changed territories. Unfortunately Baguette and Chocolate is now closed (2018).

Where to book your Trek in Sapa

At the nearby Sapa Tourist Bureau we looked through interpretive exhibits and chose our trek for the next day. Ours came with an official guide and a mini-bus connection to and from the starting point. Cost was dependent on the amount of people who took the tour and as we were the only two taking it, the cost was $23 each.

Jake’s, purchased from our hotel cost a measly, by comparison, $9.  Comparing notes afterward, it seemed the only difference was our first bus connection as Jake returned in a bus at the end of the day, the same as us.  His trek turned into a party when they were invited to join a village wedding celebration. We wished we had gone with him!

The bus dropped ourselves and guide Lung (a young local woman) above the first village, Lao Chai (different to Lao Cai), where we were joined by three Hmong ladies.  With much welcoming and hugging, the babies were strapped to backs in cosy fleece blankets secured by embroidered wraps.  After a final check that their woollen caps were securely tied, it was full steam ahead into the valley.

I would suggest booking treks and bus trips through your hotel. 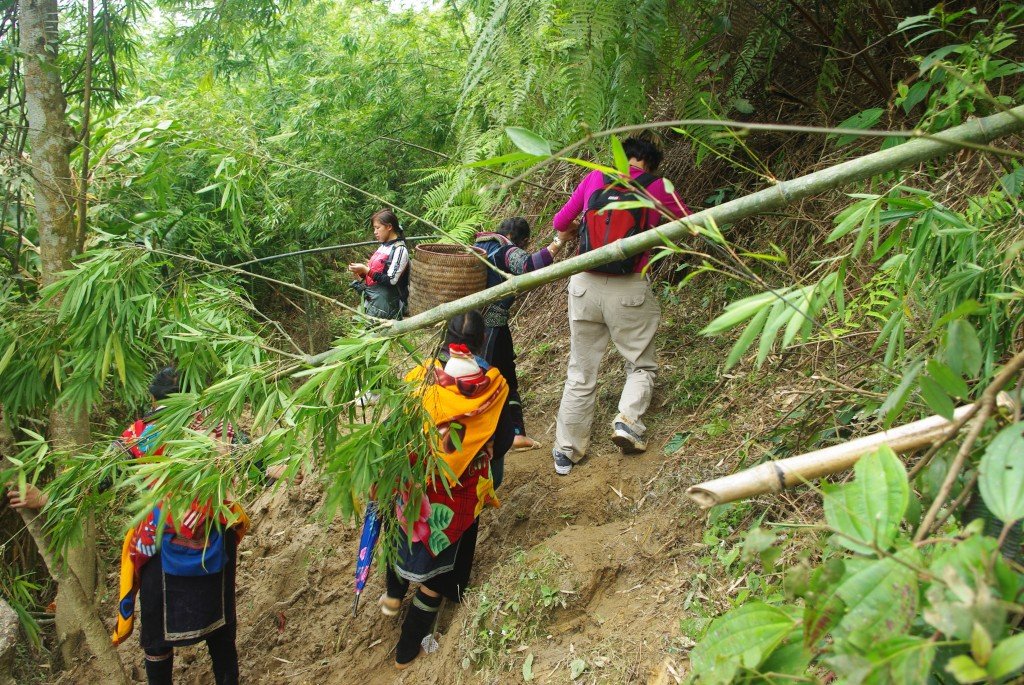 As the terrain got more difficult, the oldest Hmong, who was probably about my own age, offered her hand as support.  I returned the favour when she slipped down a muddy slope, to the amusement of the entourage.  She seemed content holding my hand, all.the.time… and I got the impression it was her self-assigned duty. We must have looked odd, trekking hand in hand. Arriving at our destination and looking back to the forrest, it was impossible to see the muddy track we’d just navigated through the bamboo forest.

Our prearranged lunch was served on the verandah of a home-stay.  The hostess met us in the village and walked with us to her home on a small rise.  A table was placed in the shade of the verandah while Lung boiled eggs in the kitchen and the babies were unstrapped, fed and cuddled.  Lung produced Laughing Cow cheese, tomatoes, cucumber, baguettes and the biggest red apples I have ever seen, from her backpack, and arranged them on the table, while Vietnamese tea was poured. 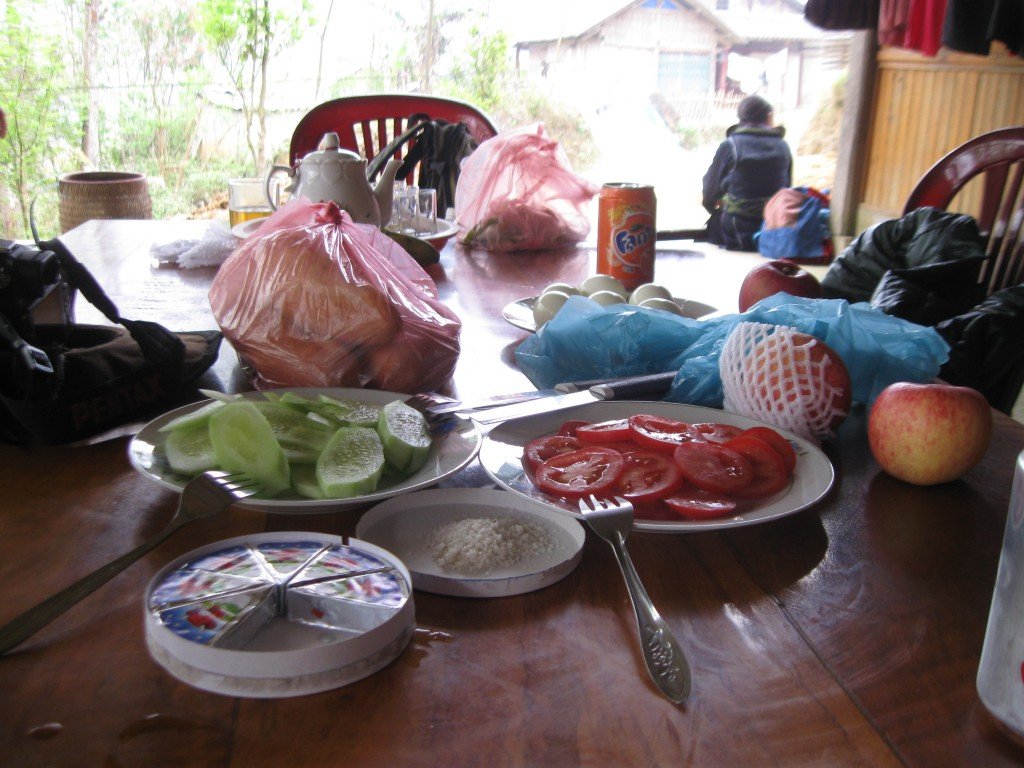 Inside, the home was spotlessly clean, with a concrete floor.  Neat lines of plastic slippers stood to attention against the interior walls, while shoes were left at the door. Sensible precautions in the muddy environs. It was odd that in this tiny village, we were served our first cold can of drink in Vietnam!  The power was off in the village as it was in Sapa that morning, so a child’s teddy bear lamp was offered to light the way to the bathroom.

After lunch we handed the boiled eggs over for the babies to eat later, while the apples found their way to a local woman who approached us for money along the route.

In a few days time Lung would be guiding a group of 19 climbers on nearby Fansipan, the highest mountain in Vietnam.  With a porter for every client, it would be quite a group. In this regard Vietnamese women are very liberated.

The small Ta Van village school held classes five mornings a week, enabling the children to work on the family farm in the afternoon.  Children were taught in their own dialect and Vietnamese, with English learned solely from contact with tourists.  A boarding school catered for children from outlying areas, who lived there with their teacher.  Primary grade 1 to 5, Secondary 6 to 9, and High School 10 to 12.  The village had a basic looking hospital, that catered primarily to the needs of the children.  Lung, in her early 20’s, spoke perfect English with no accent at all. 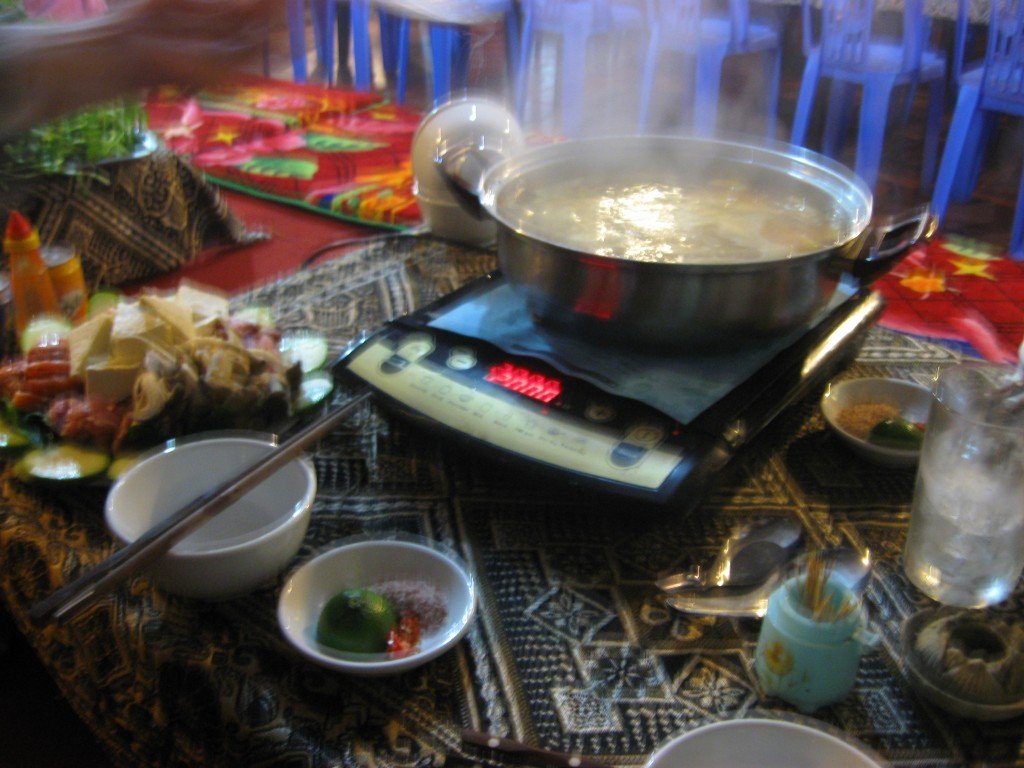 That night we had a “hot pot” dinner of pork, chicken (the same black hairy pigs and chickens that roamed freely) and salmon caught in the mountain streams. Vegetables were added from a platter overflowing with cabbage, water spinach and herbs and the whole lot simmered in stock, flavoured with ginger, tomatoes and lemon grass.

Afterward we couldn’t resist a coffee and cake at the Friendly Hotel, which advertised their Cafe as being a warm 26 degrees. As Sapa was unusually cold, with snow falling only two weeks previously, we were regulars.

Our first impressions of Sapa were a mix of colour, cold weather and Hmong culture, wrapped in a cloud of mist.

Read more about One Month in Vietnam here and more Asia posts here.