On our return trip from Barcelona to Brisbane, we had a twelve hour day time stop over in Singapore.  While generous, the free stopover tours from Changi Airport did not appeal as they would only half-fill the day and leave us stranded back at the airport twiddling our thumbs.

I approached the tourist information counter and started talking to the assistant. I told him of a visit I had made to Singapore THIRTY-FIVE YEARS AGO, and how I had eaten in a local food court, about how fantastic and cheap the food had been and how I would love to do that again. His eyes lit up – I was talking his language now.  A map and pen were produced and he started circling and writing names vigorously.

A Plan was being Hatched

With limited time available he suggested we travel by MRT (Mass Rapid Transport), the Singapore Rail System.  We, like the 2.5 million other people that used it daily, would not be held up by congested roads and would arrive cool, calm and collected at our destination.  And with a train every 3 to 8 minutes from 5.30 a.m. to 1 a.m. we would not be kept waiting.  He explained the system briefly, and we followed his instructions to a “T” with help from some enthusiastic Singaporean Samaritans.

The trains were cool, clean, fast, crowded and SILENT.  The only words we heard were – SORRY! – EXCUSE ME! as people squeezed in.  I Pods, I Phones and Kindles ruled the tracks. Then an old chinese lady, complete with shopping trolley, motioned that I should sit beside her in the seats reserved for the old and infirm.  We sat together in companionable silence, smiling at each other.  I am not too old to travel.  OK? 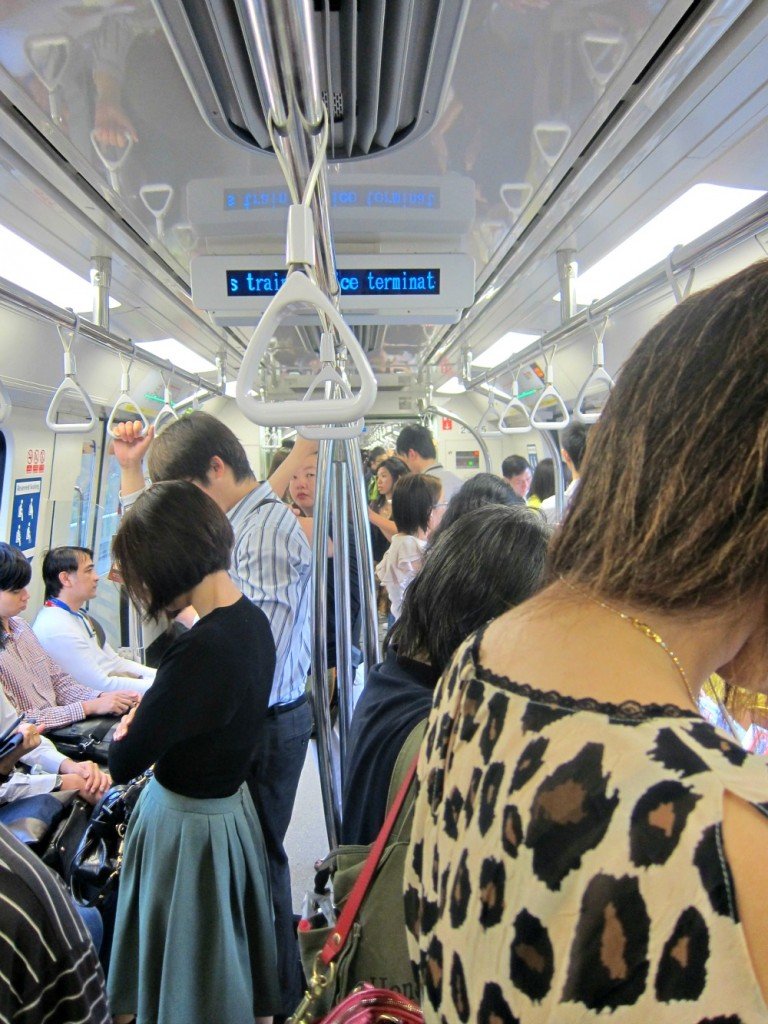 At our first stop was Chinatown Markets, where at this hour of the morning the wet markets were all action and the breakfast options minimal. 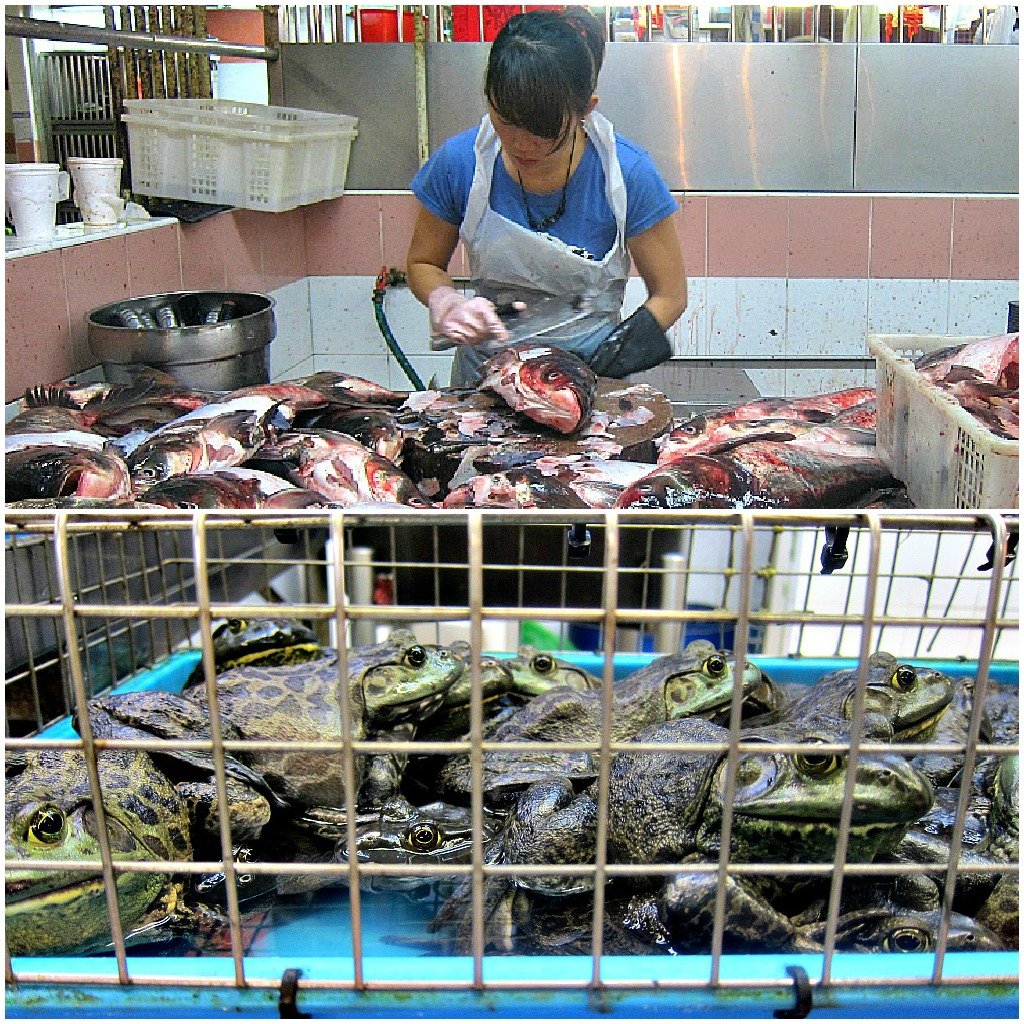 We chose Siew Mai (Steamed Pork Dumpling) 4 for $2 from Hong Kong Dim Sum.  They were dainty mouthfuls of tastiness, which was what we were after – we had a big day of tasting ahead of us.  Regretfully abandoning her morning paper, the vendor plopped dumplings from a bamboo steamer onto our disposable plate, took the cash, and picked up her paper again in one seamless motion and without changing her expression. 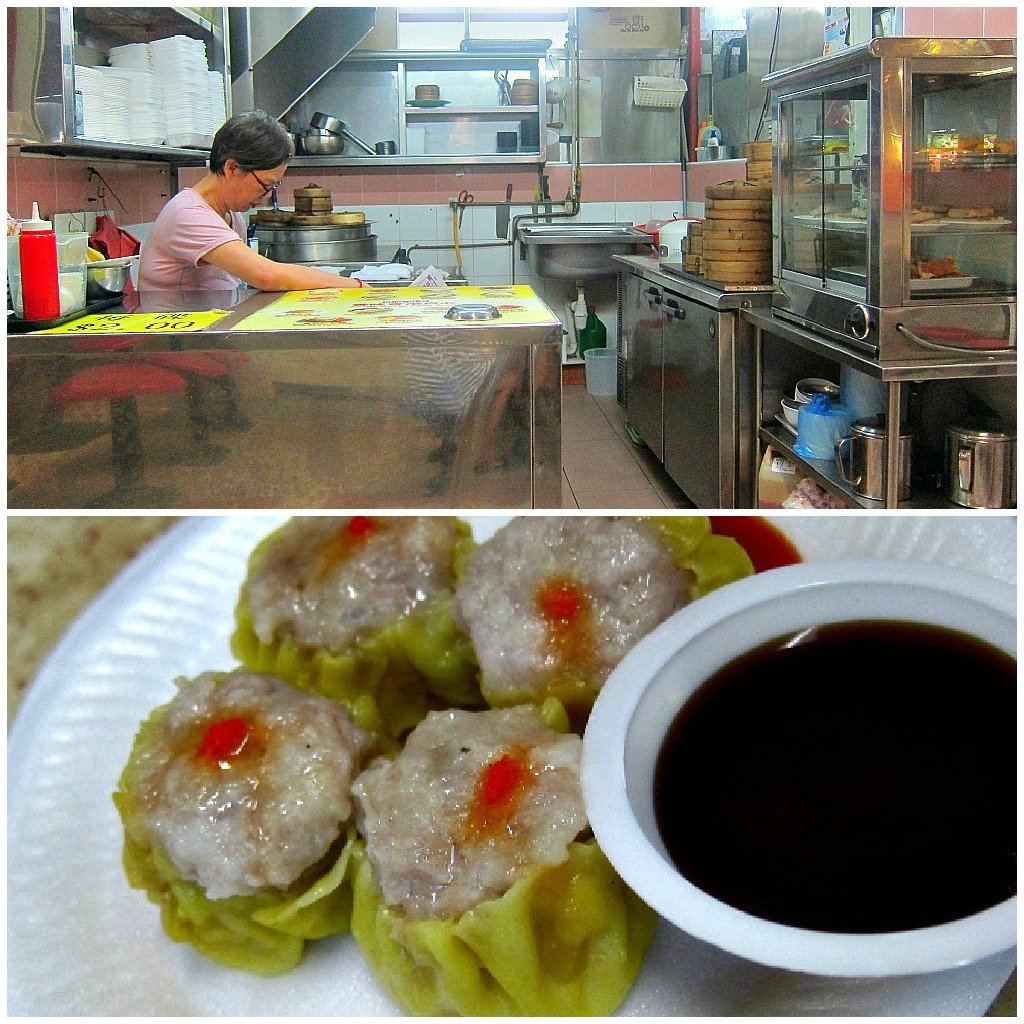 At our second stop – Kampong Glam, we would eat food “Just like a Local” our helpful assistant had said.  As he told us this, even though it was only early in the morning, he rubbed his belly wistfully, and both he and I wished he could accompany us! 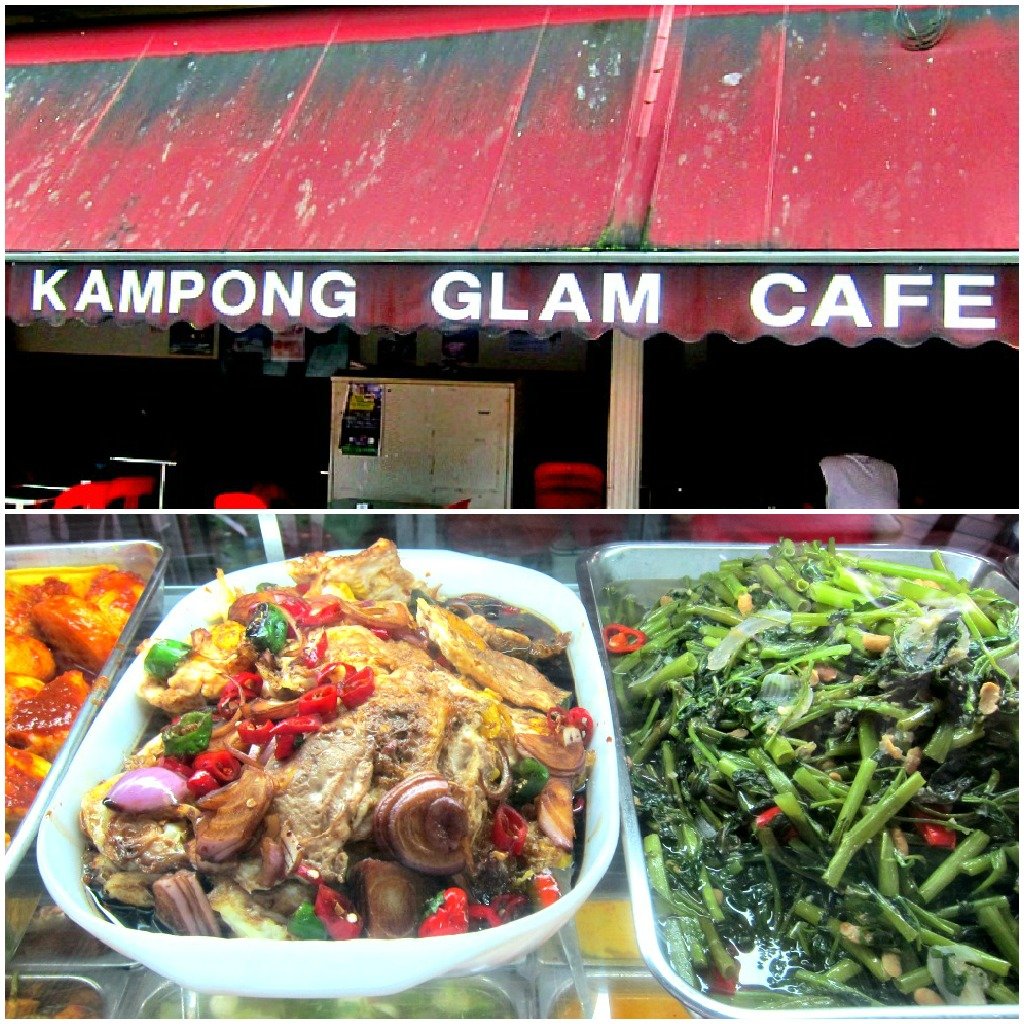 The prawns were fiery in temperament, and delightfully, the sweet potato morphed into some kind of seafood, possibly Abalone.  Those prawns were begging for a mellow accompaniment and the eggplant did not disappoint.  And the fish? Surprisingly good. 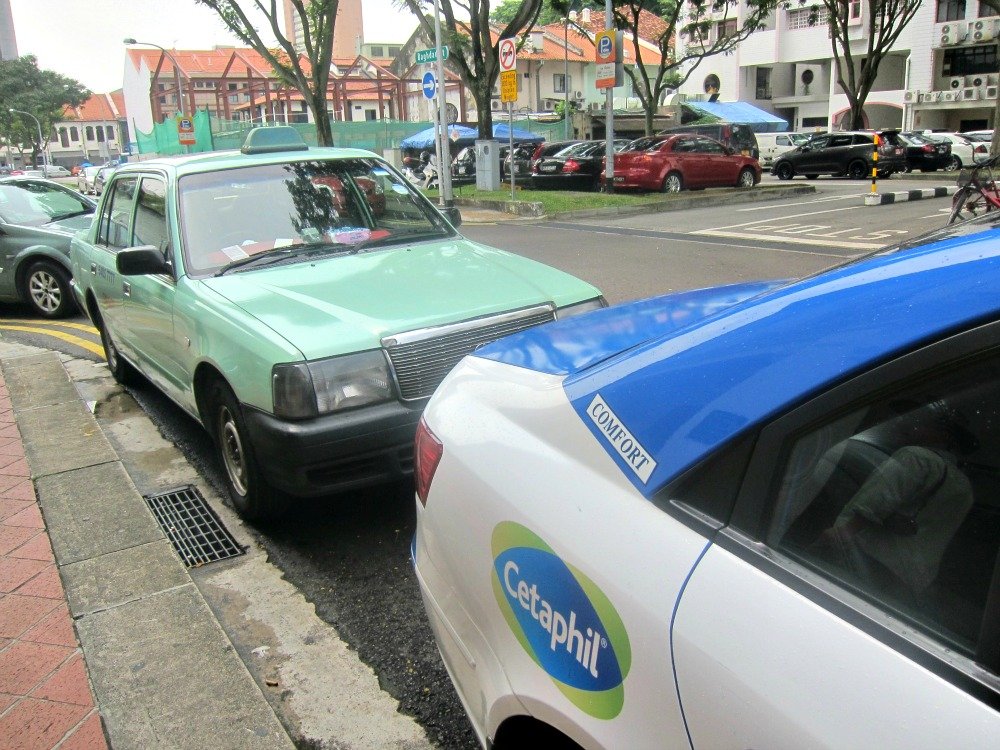 The area and the cafe shared the name Kampong Glam.  Taxis lined the street outside and were backed up around the corner while their drivers dined in.  Ask a Cabbie – they always know the best and cheapest eats in Town.  Our own meal came to a grand total of $9.

At our third and final stop – Little India, our tourist information guide had suggested we eat Roti Prata and Nasi Byrani, but he doubted we would be able to fit it all in! 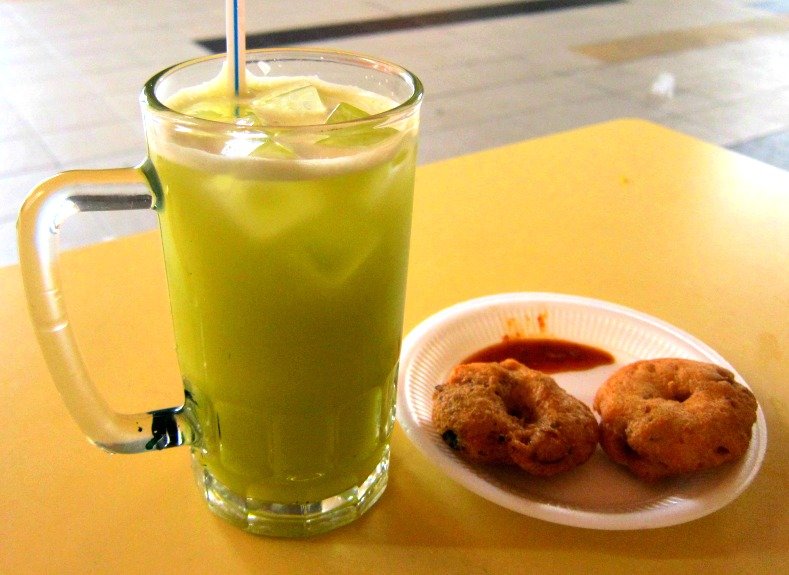 He was correct.  All I could squeeze in were these Plain Vadai fritters (45 cents each).  Light and fluffy with a hint of chives – I had purchased one for both of us but Marty bailed.  The juice was huge and refreshing with a hint of lime and a cost of $1.50.  We have rolled sugar cane ourselves in Vietnam with a small slice of lime added – a universal theme that cuts the sweetness.

But on our way to Little India, we managed to get lost and ended up on the bottom floor of a shopping centre and in – you guessed it – a food court.  Although we did not indulge, there were some tempting choices on offer. 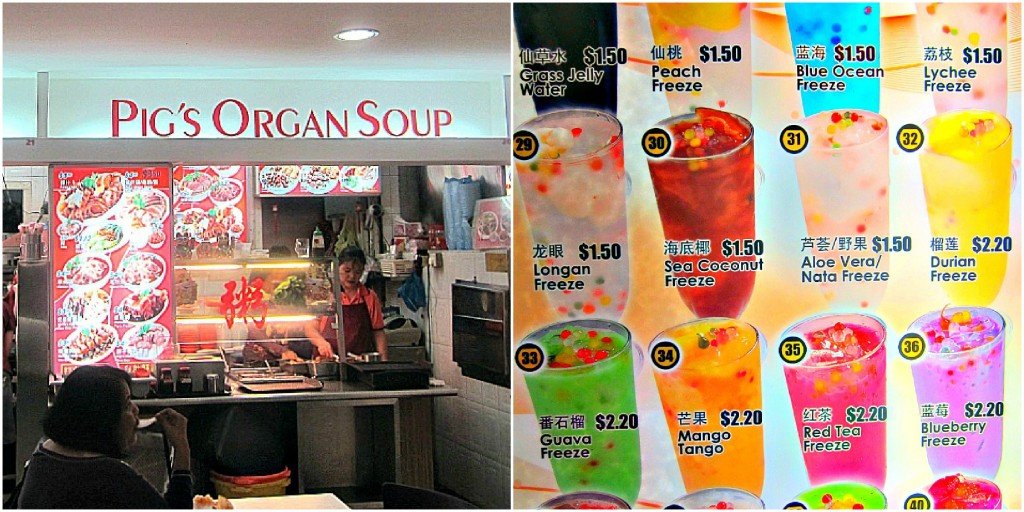 Although the Grand Plan had us travelling by MRT between stops, our guide had not reckoned on Marty’s penchant for walking regardless of temperatures and humidity.  Maybe it was for the best, after all we had consumed.

And as we walked we managed to also:

The Tastiest and Best Value meal of the day.

We stumbled upon the Tian Wanton Sidewalk Noodle, New Bridge Road on our way from Chinatown to Raffles.  There were plenty of Singaporeans lined up joking with Auntie as we placed our order for shrimp dumpling soup.  The surprise was a whole prawn encased in pork mince inside each dumpling.  They were the most delicious thing, and at 5 for $3, the best value as well.  On top of this the soup which even minus condiments was delicate and tasty, really delivered after a splash of condiments.  We both left with smiling taste buds.   More walking! 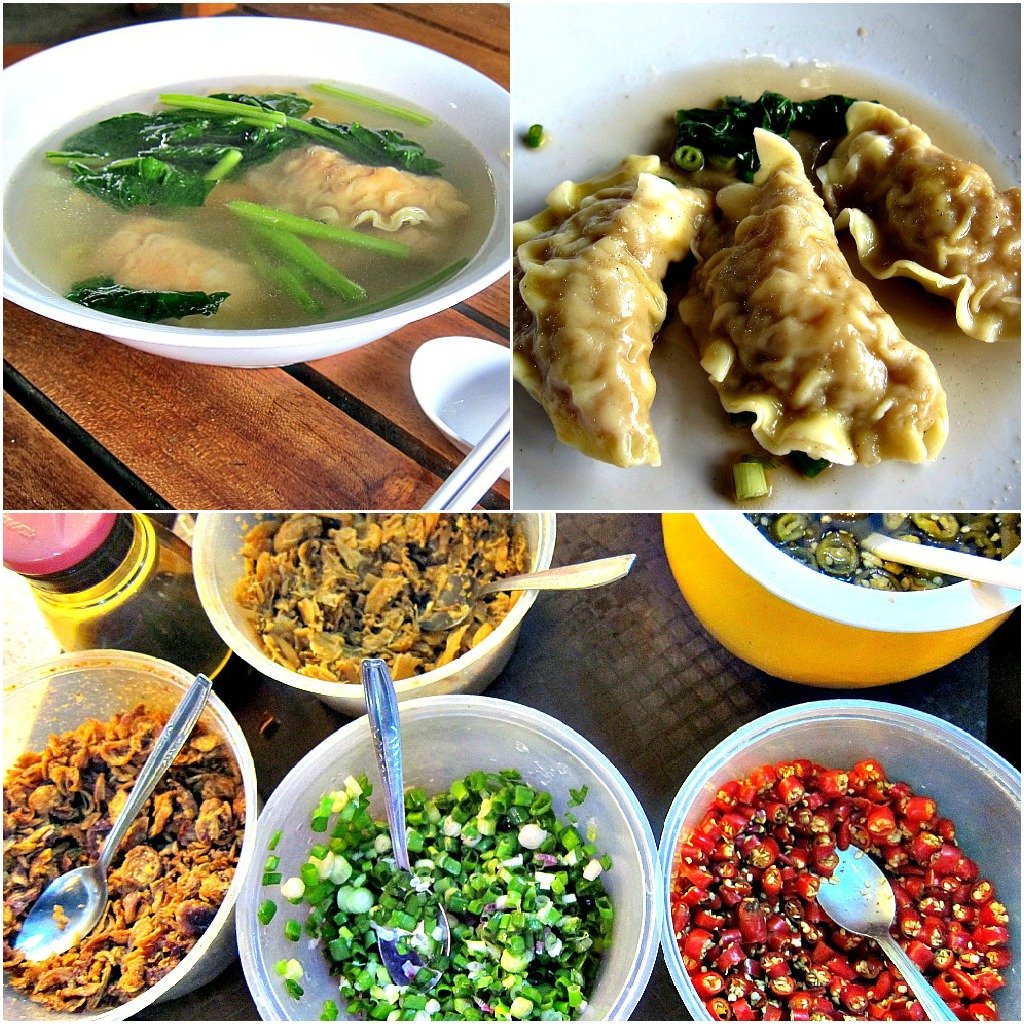 We wandered around the shops, restaurants and bars, of the huge Raffles Hotel, but it was a little too early in the morning for a Singapore Sling! 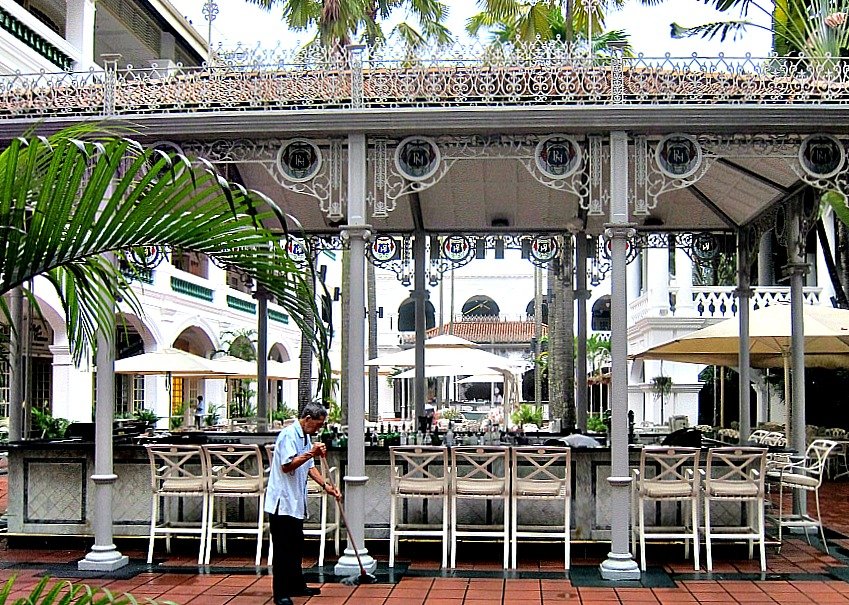 Attracted by crowds of locals and tourists we investigated the ice-cream vendors on the footpaths of Orchard Road.  No-one could dispute that it was hot and bloody humid, but why the mega interest in an ice-cream?  Turns out it was all in the serving of it.  Traditional ice-cream wafers lay neglected while everyone went crazy over the rainbow bread option.  All that was needed were some sprinkles and it would be a real partay!

It is amazing what you can experience in a twelve hour stopover.

Tell me YOUR Stopover Stories.