New Zealand South Island lakes are the blue on blue.  The only other place we’ve seen that equals the intense cool blue lakes of New Zealand’s South Island, is Canada.

But then New Zealand is like a mini Canada, and we all know good things come in small packages!

Why are the lakes in New Zealand’s South Island so Blue?

Let me rephrase that question:

Why is Lake Tekapo so blue?

I will use Lake Tekapo as as example because I think it is the most spectacular of New Zealand’s blue lakes.

There are glaciers in Lake Tekapo’s headwaters and glaciers have a habit of grinding rock to a fine dust or flour. This rock flour becomes suspended in the water making it opaque and brilliant blue.

Where is Lake Tekapo?

How to get to Lake Tekapo and other Blue Lakes?

New Zealand might be known as The Land of the Big White Cloud, but it’s definitely the land of campervan road trips and that is how we got to Lake Tekapo with some Kiwi Friends.

Driving from Timaru through Mackenzie Country to Lake Tekapo and the incredibly blue lakes of New Zealand’s south island is an enchanting experience.

In our case the guys took our Jucy Campervan while the girls loaded into an old sedan.

There is nothing like a girl’s road trip to catch up with old friends!

That’s the guys in front of us on our New Zealand Road Trip. 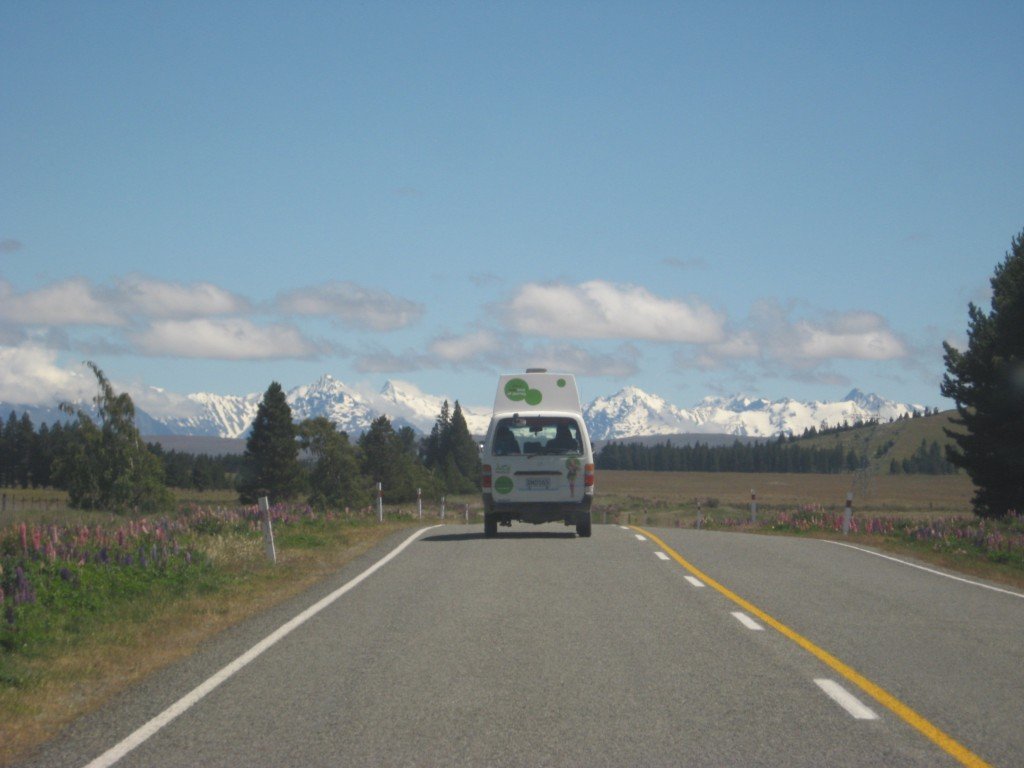 This link shows all the GYG tours generated from Lake Tekapo as well as a Tour departing from Christchurch that encompasses Lake Tekapo.

Spring is the best time to visit New Zealand. The moderately cold temperatures and wild lupins blooming on the shores of Lake Tekapo were testament to that.

Clean crisp air,  boots crunching on bleached dry rocks,  bright blue/purple Lupins and mesmerizing iridescent blue water – what is not to like about Lake Tekapo?

Church of the Good Shepherd as viewed from the Lake. 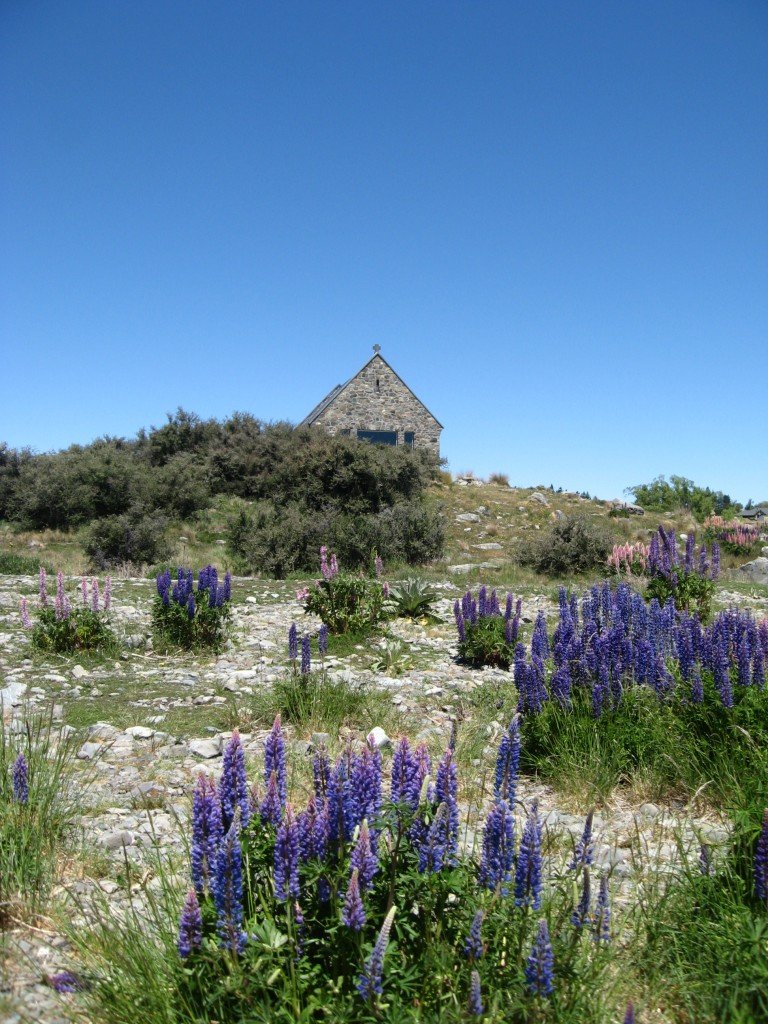 Can I swim in Lake Tekapo New Zealand

If you’re wondering what there is to do at Lake Tekapo besides stare at that pretty blue water, you can also kayak or paddle board but you’d better not fall out. Seriously the water is extremely cold. The Kiwis swim in it in Summer but this Aussie would never even contemplate it.

The Church of the Good Shepherd (suitably named for a New Zealand church) is sought after as a wedding venue – the window behind the alter frames the lake!

For a Church, this one is hideously popular. Best steer clear when the tourist buses arrive but if you’re staying near Tekapo get up early and visit for Sunrise photos.

The church itself can only be accessed with the caretaker:

Neither Marty or I are religious, but he flatly refused to accompany me inside the Church to take a photo of the view through the window. He felt it was not appropriate, which in turn made me feel like I shouldn’t. 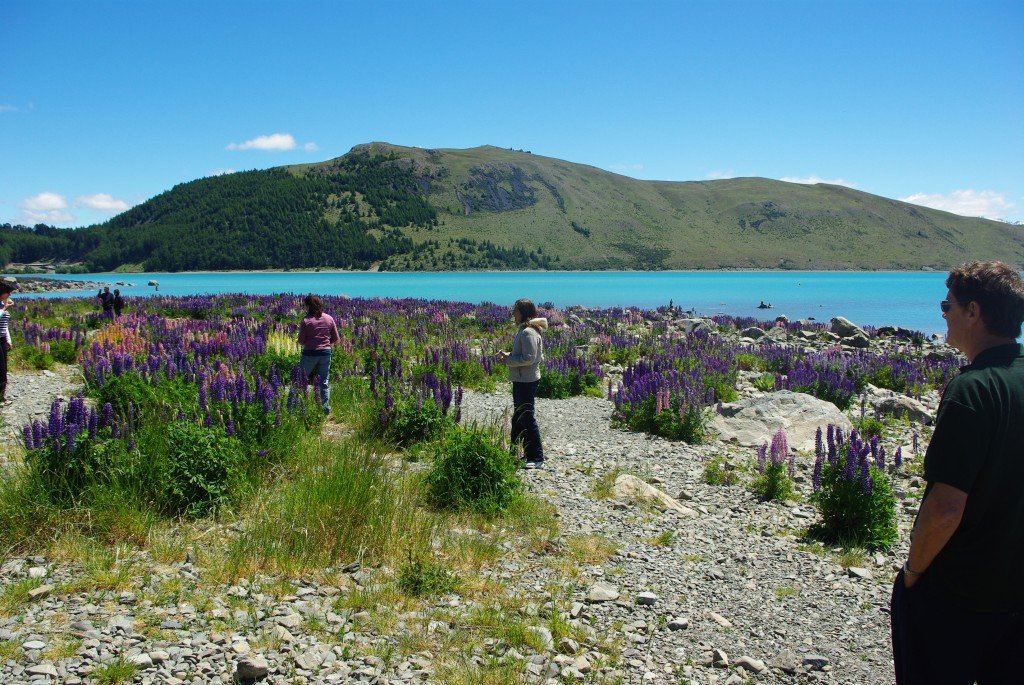 There is a New Zealand South Island lake called Blue Lake. Sacred to the Maori, Blue Lake is in Nelson Lakes National Park. Fed from Lake Constance, it is believed to have the clearest water in the world. It is not near Lake Tekapo but south of Nelson as the top of the South Island.

The Lake Tekapo Mt. John Observatory, operated by the University of Canterbury, once known as Earth and Sky is now known as the Dark Sky Project. It is the most southerly permanent optical observatory in the world. Once

The position was chosen because of its lack of night light pollution.

Mt John is the best view point around and you can see forever from up there. 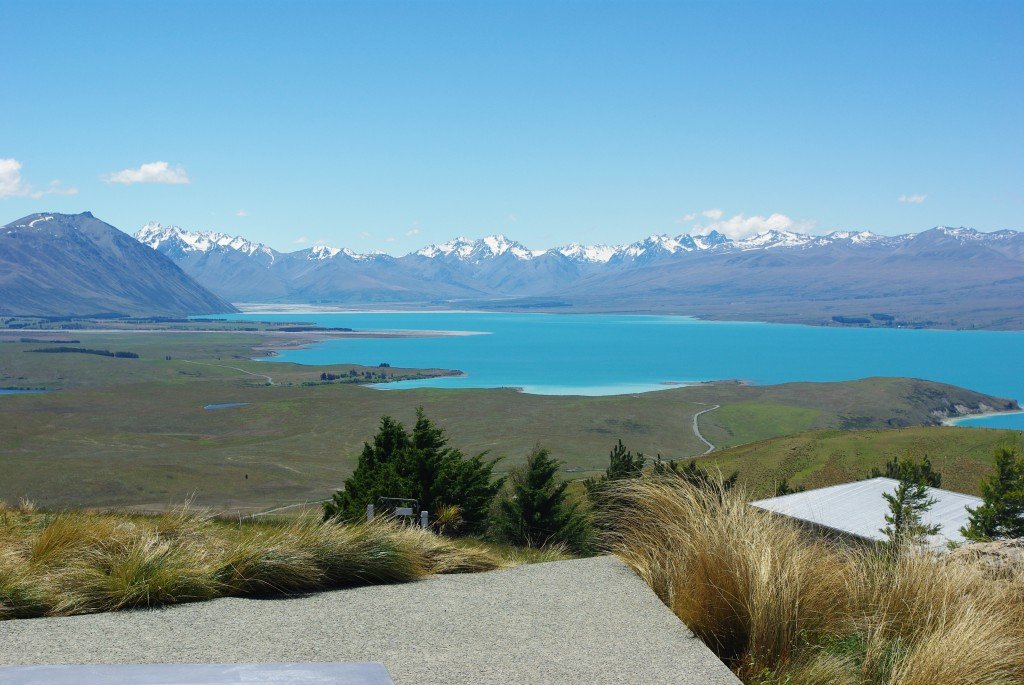 Zip up your jackets, order a hot chocolate from the glass walled Astro Cafe, then soak up that views of the Mackenzie Basin, Aoraki Mt Cook and Lake Takapo from the deck or take a hike. Kiwis call it tramping.

Even though the night views are what makes this area perfect for viewing the stars, the day views are fantastic too – brilliant blue lakes, snow covered mountains and blue skies.

By the way there is an $8 per car road fee to access Mt John Lake Tekapo. The drive takes 15 minutes from Lake Tekapo or a 45 minute uphill hike.

Astro Cafe is a day time cafe with simple type food (it’s all about the view). But it’s soup and toasted sandwiches and Barista coffee hit the spot. Even after the kitchen is closed you can still buy food from their cabinet.

Lake Tekapo observatory is a short walk from Astro Cafe. 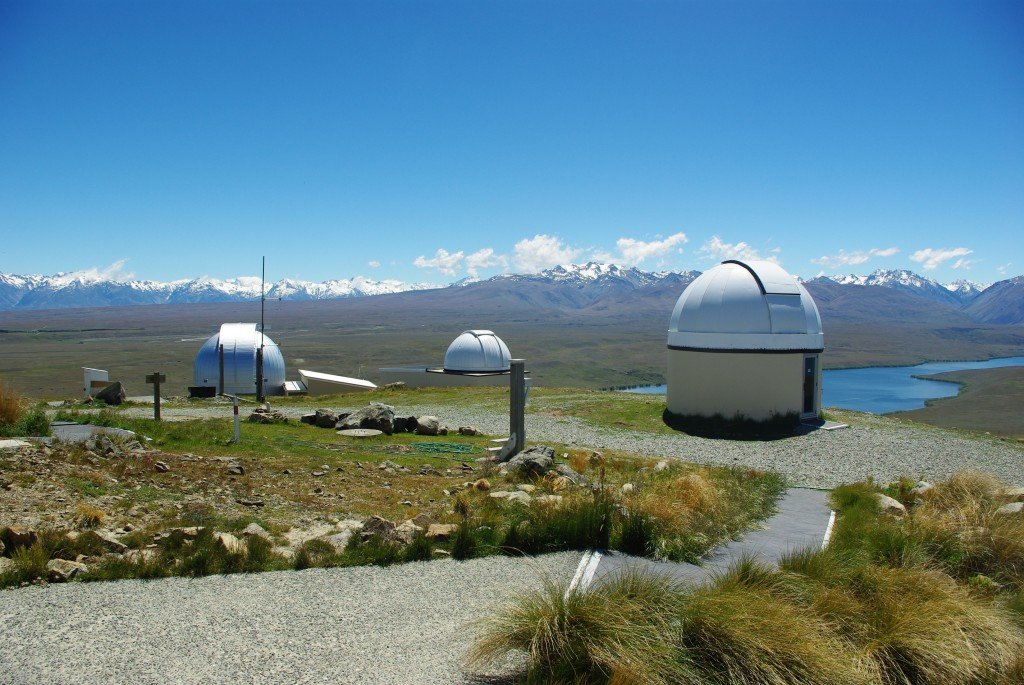 Dark Sky Project also operate the Dark Sky Diner, opened in July 2019,  down by the Lake. Unlike Astro Cafe, Dark Sky Diner is open nights as well as days. A good place to site under a Tekapo night sky.

The diner is located at 1 Motuariki Lane and can be accessed on foot from Tekapo Village.

Open 9 till late 7 days a week. Fully licensed after 5 pm.

Next up was our overnight stop at the 6.4 sq km Lake Alexandrina – a motor free Lake. This typical high country lake is fed by a spring and is full of Rainbow Trout and Salmon. It is also very deep and those suckers are difficult to catch. 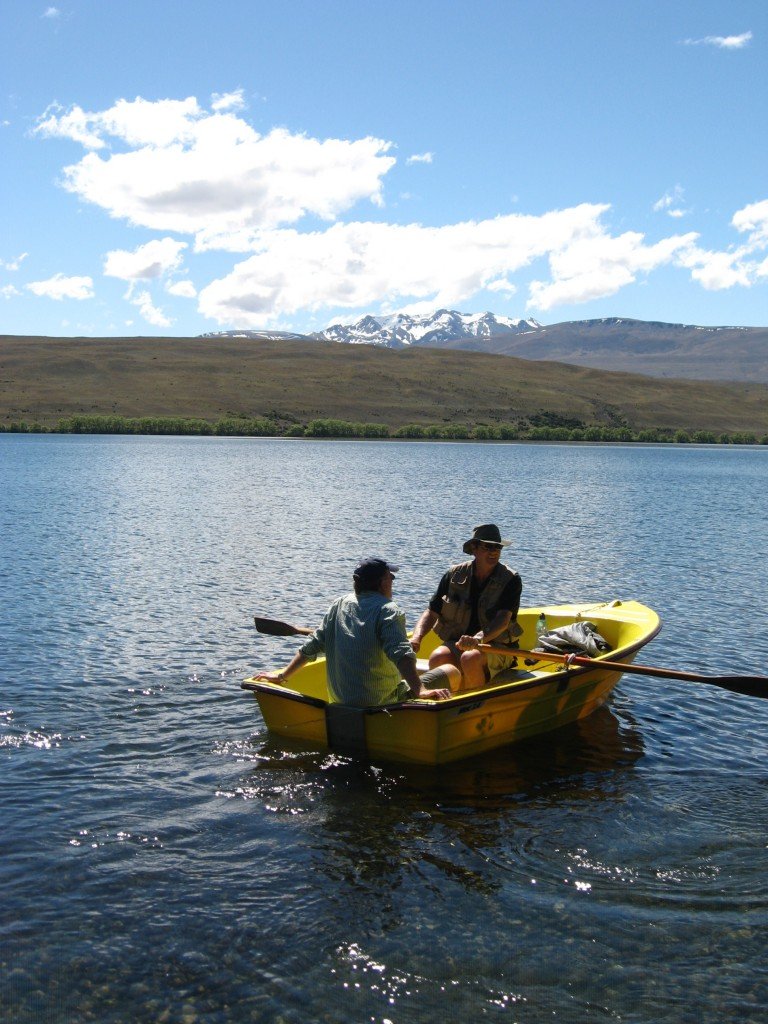 We stayed at a genuine fishing bach (hut), for some relaxing days of trout fishing and hill tramping for views over Lake McGregor and Lake Tekapo. 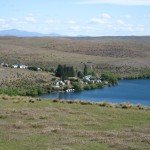 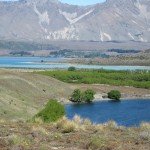 Staying somewhere off the beaten track is on every traveller’s wish list and our Kiwi friends enabled us to do that here.

Airbnb might be the best place to find a similar experience. If you haven’t used Airbnb before you can get a very decent discount by booking via the link in our sidebar.

There were fishy tales and drinks around the Barbie in the afternoons before it became too cool. 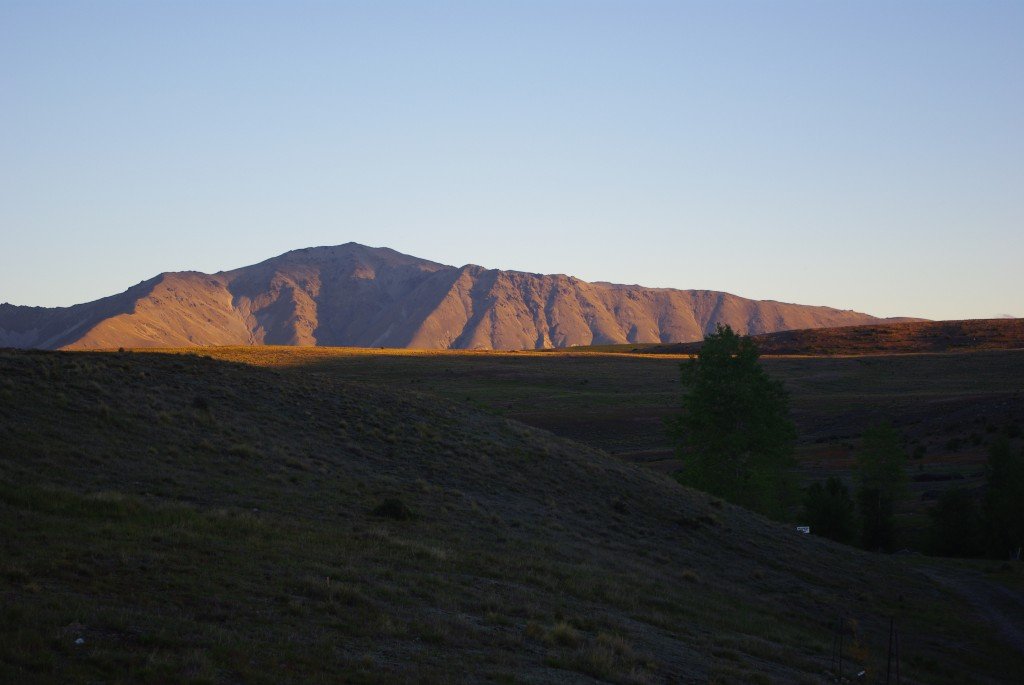 Is Lake Tekapo worth visiting?

I can’t believe people ask this question. The answer is Yes. I rate Lake Tekapo as on the best things to see in New Zealand.

If you want to see Mount Cook, the tallest mountain in New Zealand, then Lake Tekapo is the place to be. Mount Cook in all it’s glory fills the sky behind Lake Tekapo.

Aoraki/Mount Cook (in the background) lost 10 million cubic metres of snow and rock in 1991 – causing 10 metres to be lost off the top. 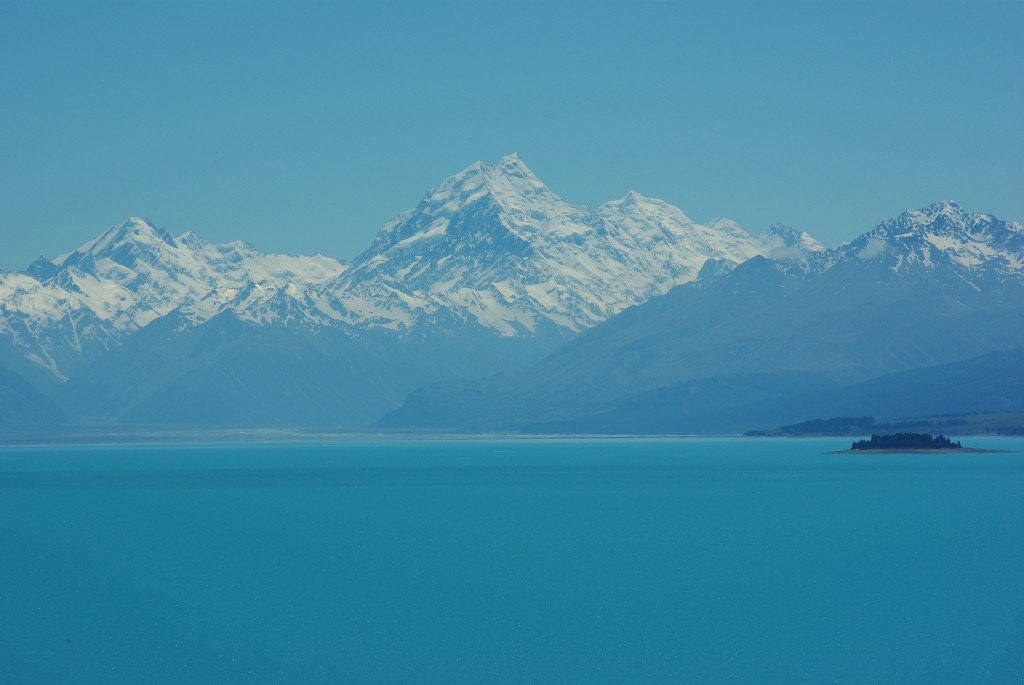 After leaving the blue lake of Lake Tekapo our South Island Road Trip continued on to Mt. Cook glacier.

WE WANT TO HOUSE-SIT AGAIN!
Next Post: KICKING HORSE PASS (HOW I LOVE THAT NAME)