In the town of Split on the Dalmatian cost of Croatia it is possible to step through a gateway in a modern bustling city into a Roman Palace built in 305AD. Palaces usually summon expensive thoughts, but it costs nothing to enter the palace in Split, making it the best of the free things to do in Split. 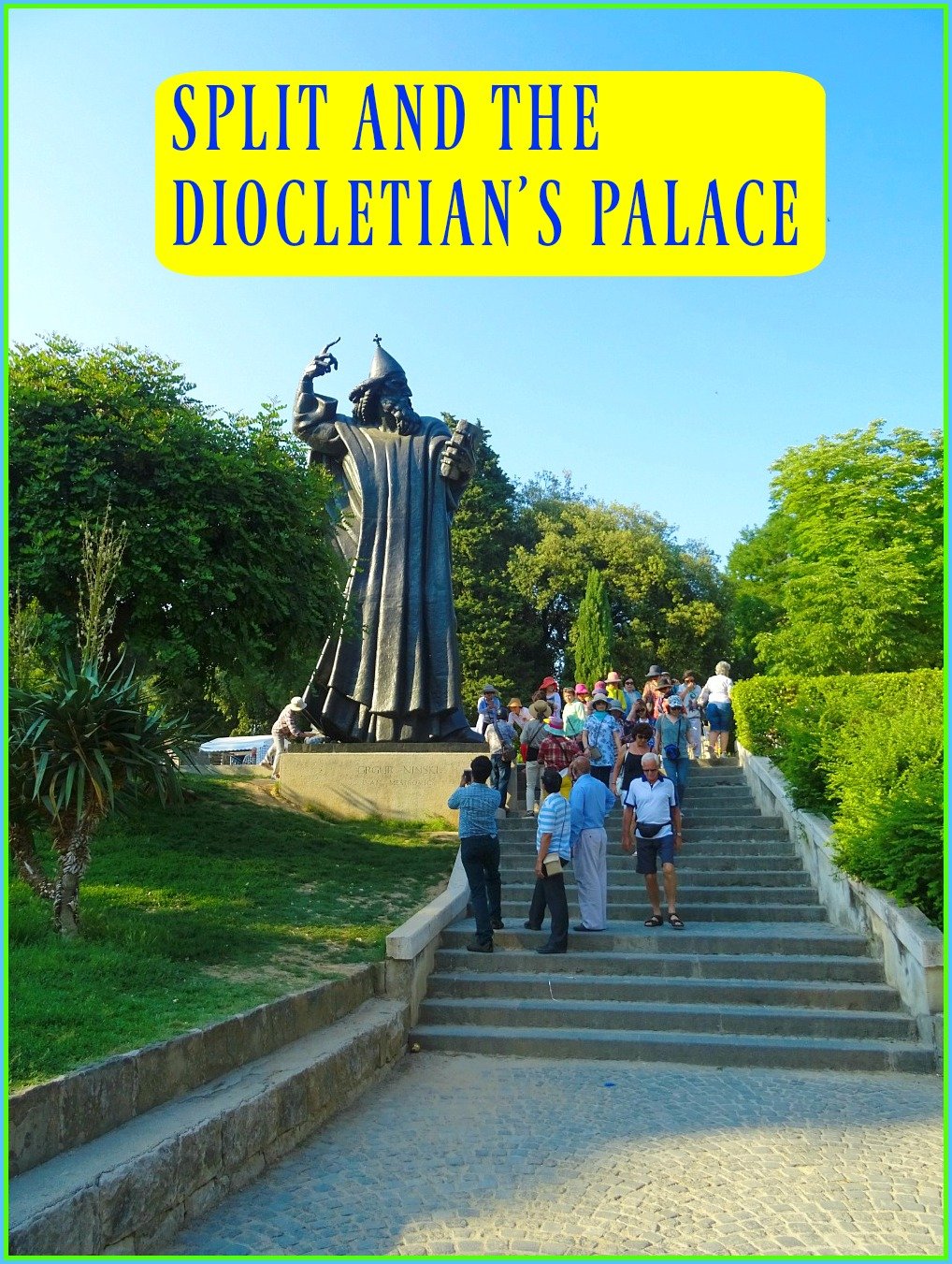 Emperor Diocletian built the Palace as his retirement home, outside the then Roman Dalmatian Capital city of Salona. After centuries of abandonment the Seventh Century AD citizens of Salona fled inside the palace walls for protection from the Croats and never left.

The fortress like Palace Grounds, which have housed up to 9000 people at a time, are intertwined with modern day Split in such a way that the two are now inseparable, with 3000 people still calling the palace home.

The white limestone, river Tuff and Brac Island marble buildings accommodate modern commerce, interspersed with intriguing sights from the past. Brac Island is one of the many island that can be visited from Split.

The Palace was originally decorated with eleven 3500 year old sphinxes from Egypt. This is one of three left today. It decorates the Peristyle and can be scrutinised up close. 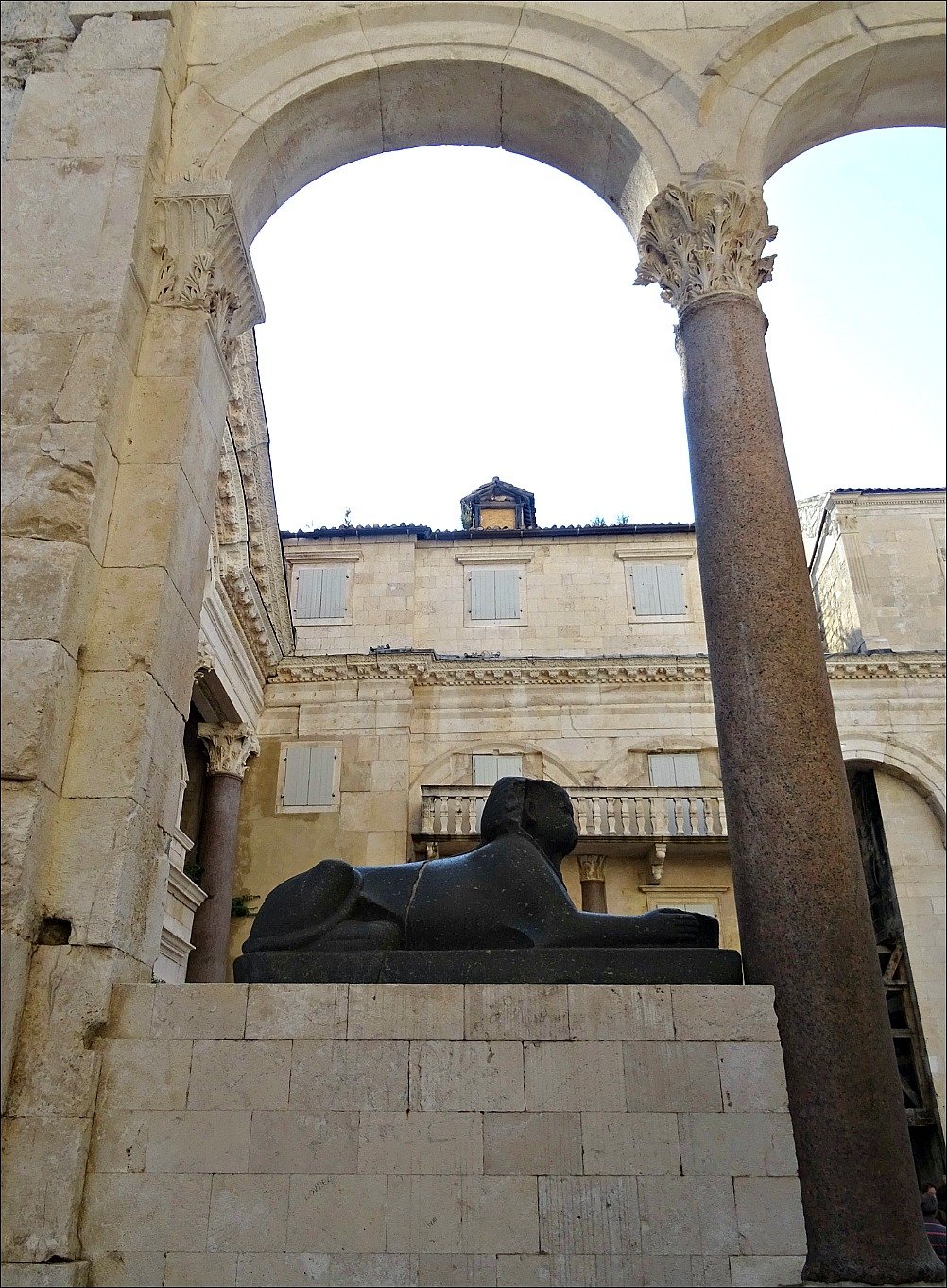 Relax in the Peristyle of Diocletians Palace

The colonnaded courtyard or Peristyle, situated at the intersection of two main palace roads and leading to the imperial apartments was the meeting place of powerful Roman citizens. (Note the sphinx is at back left of frame). 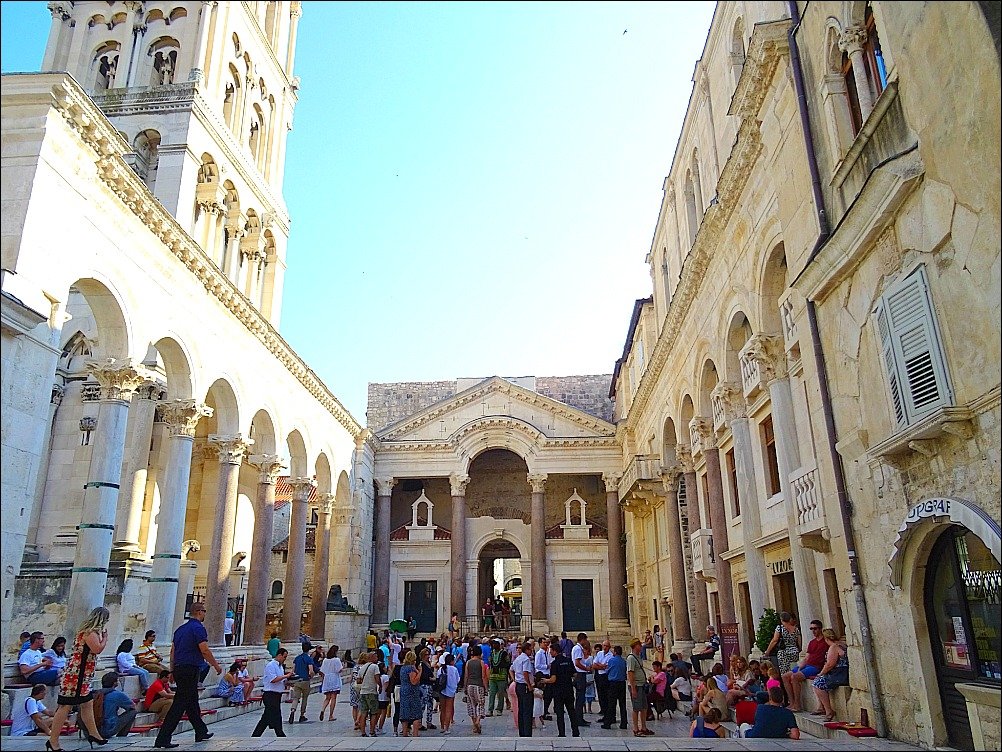 A good place to sit and dream or just recuperate. 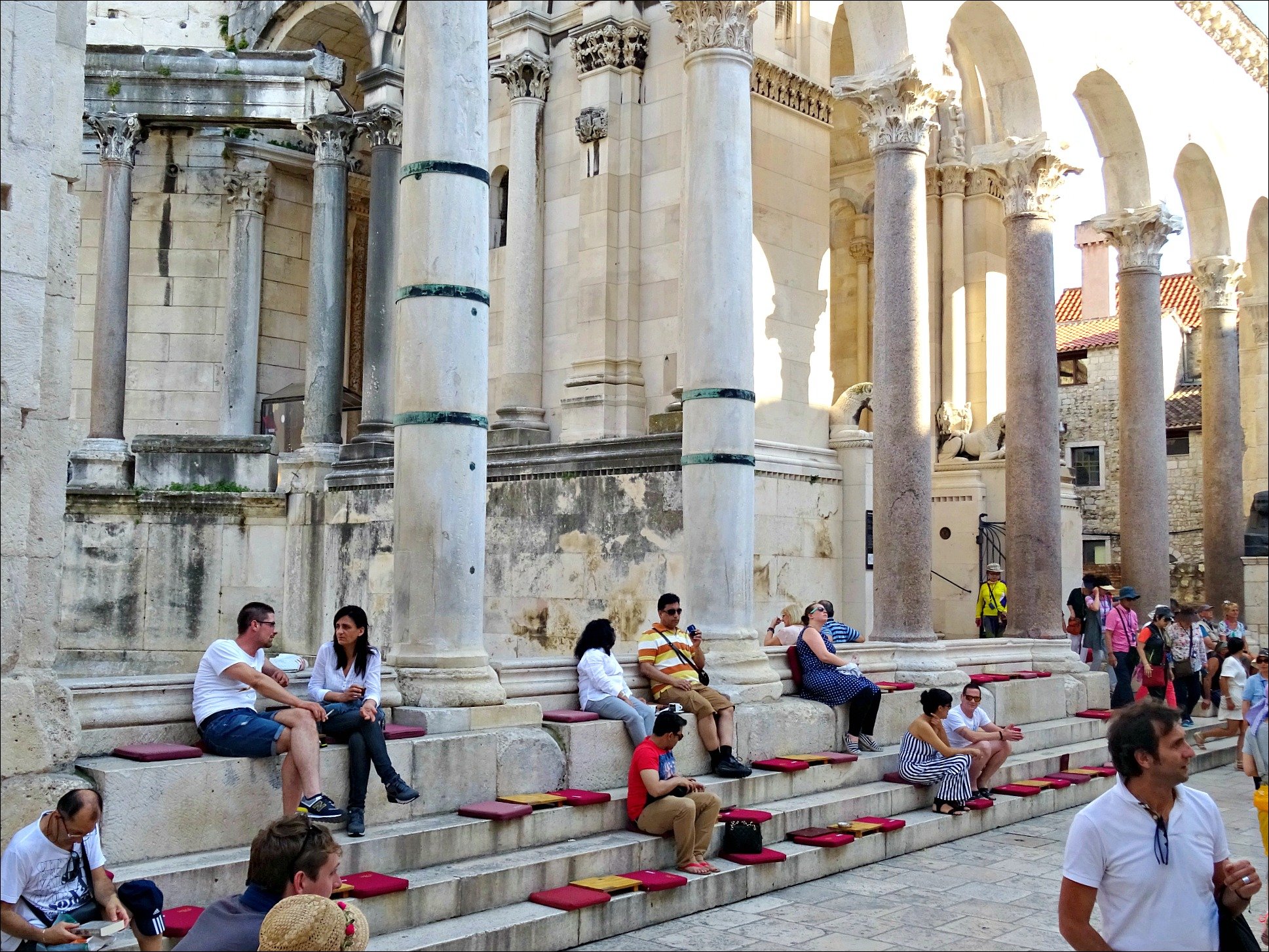 Check out the Tower of Saint Domnius in the Palace

The landmark tower of Saint Domnius, is 12th Century while the 7th Century AD Church, to which it belongs, is the oldest Catholic Cathedral operating in it’s original unaltered building, in the world today.

The tower, which can be seen in the photo of the Peristyle above, is a Split landmark. 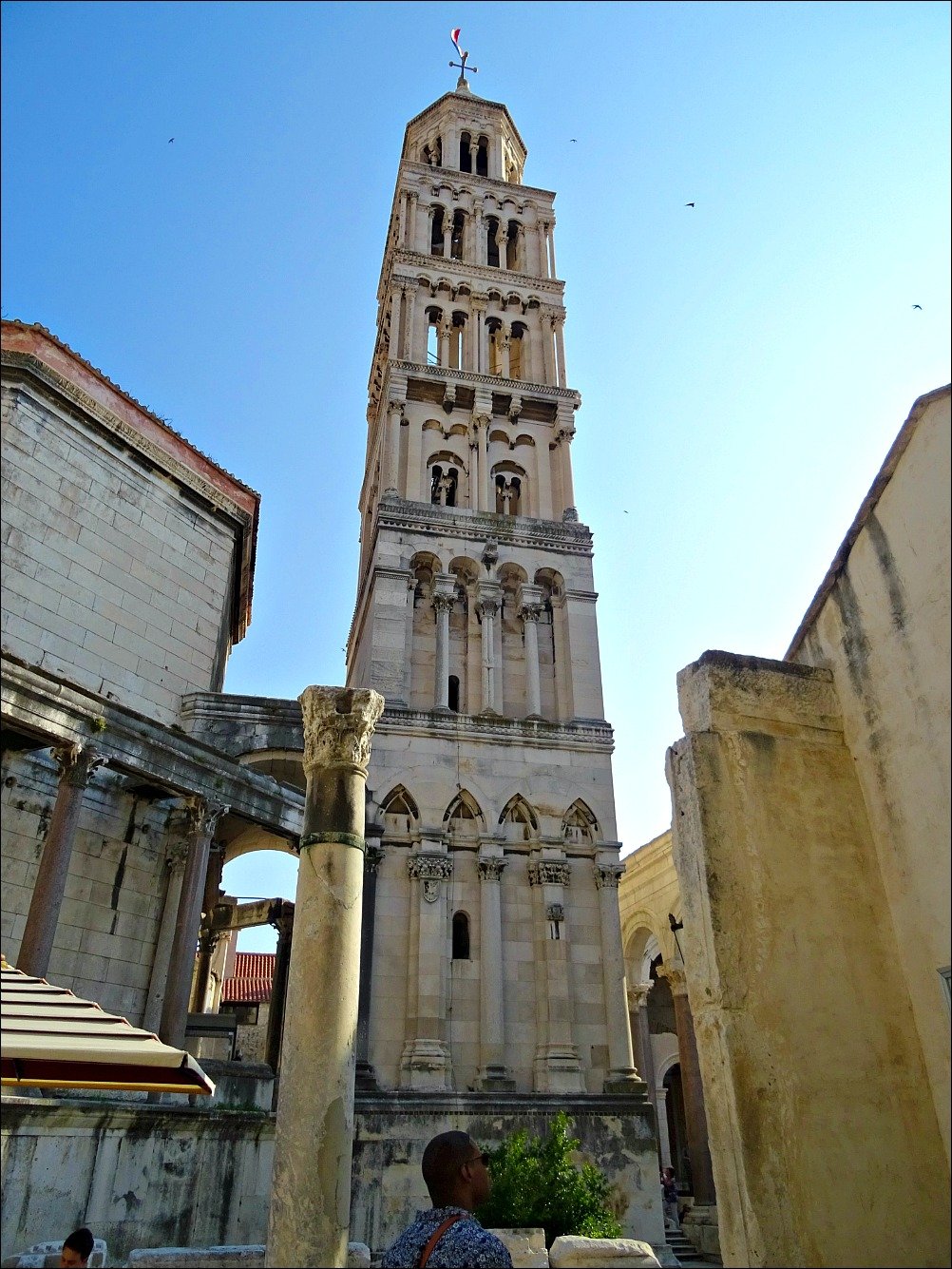 Walk through the Golden Gate

The Golden tag originated in the 16th Century under Venetian Influence, but in Diocletian’s time it was known as Porta Septemtrionalis. From the Peristyle, the road led through the Porta directly to Salona the Roman Capital of Dalmatia and back then was reserved exclusively for the emperor and his immediate cohorts. 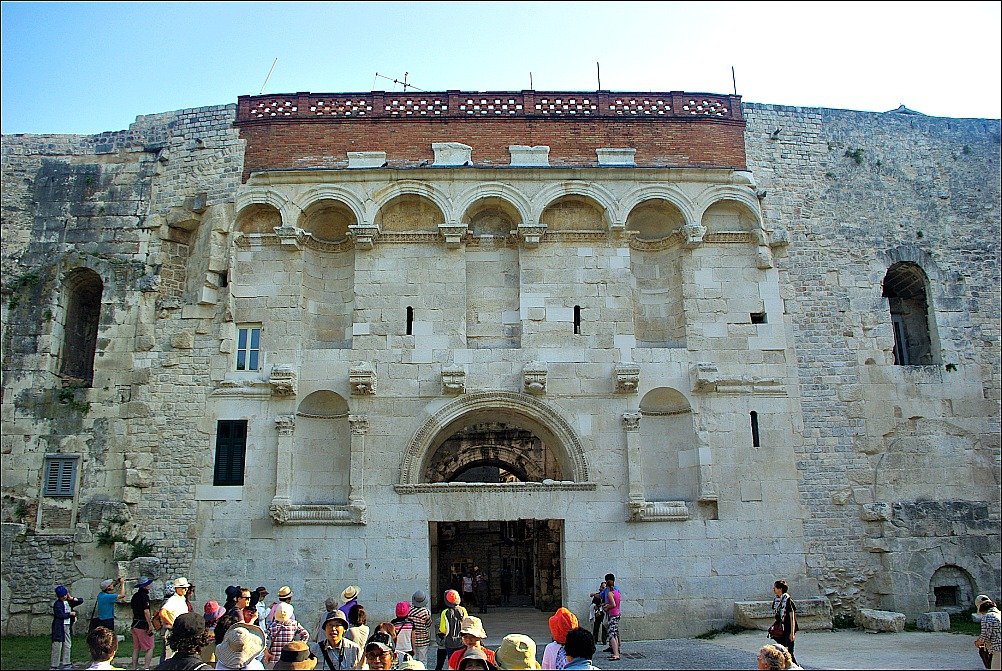 Inside the golden gate above is another gate (see below). This was a defensive mechanism where persons could be vetted or detained between walls. The actual doors are long gone but imagine they are still there and you will get the idea. 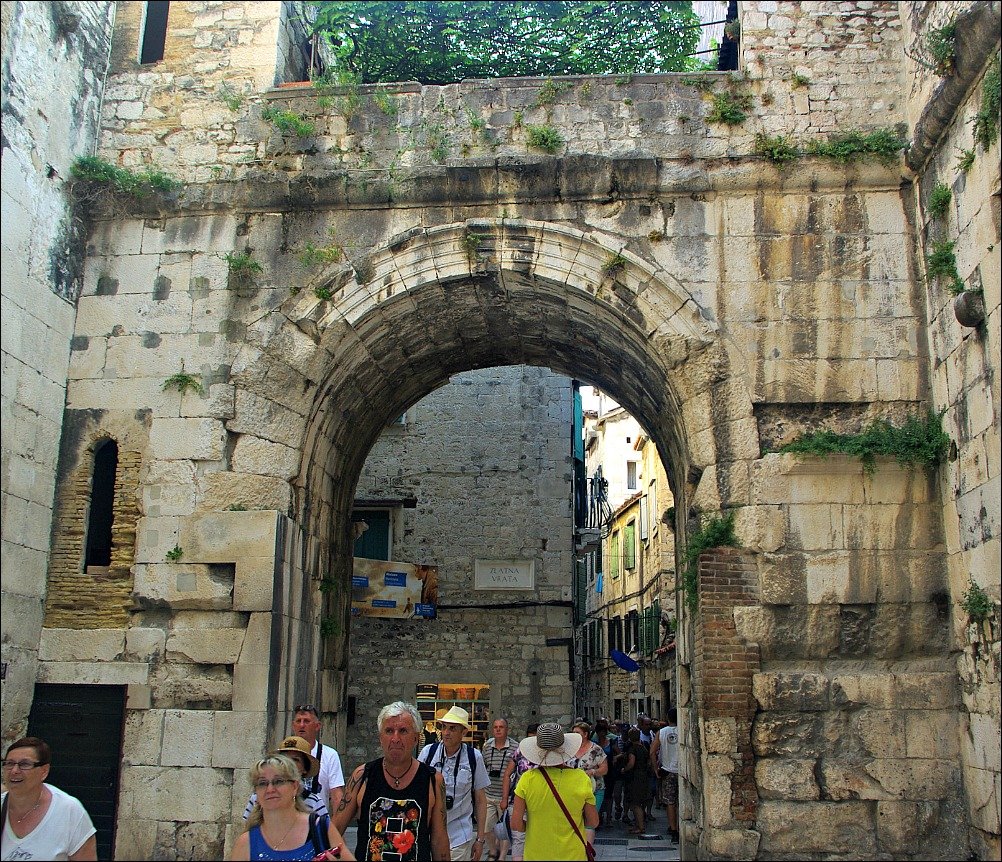 The northern wall containing the Golden Gate is set in a green space. 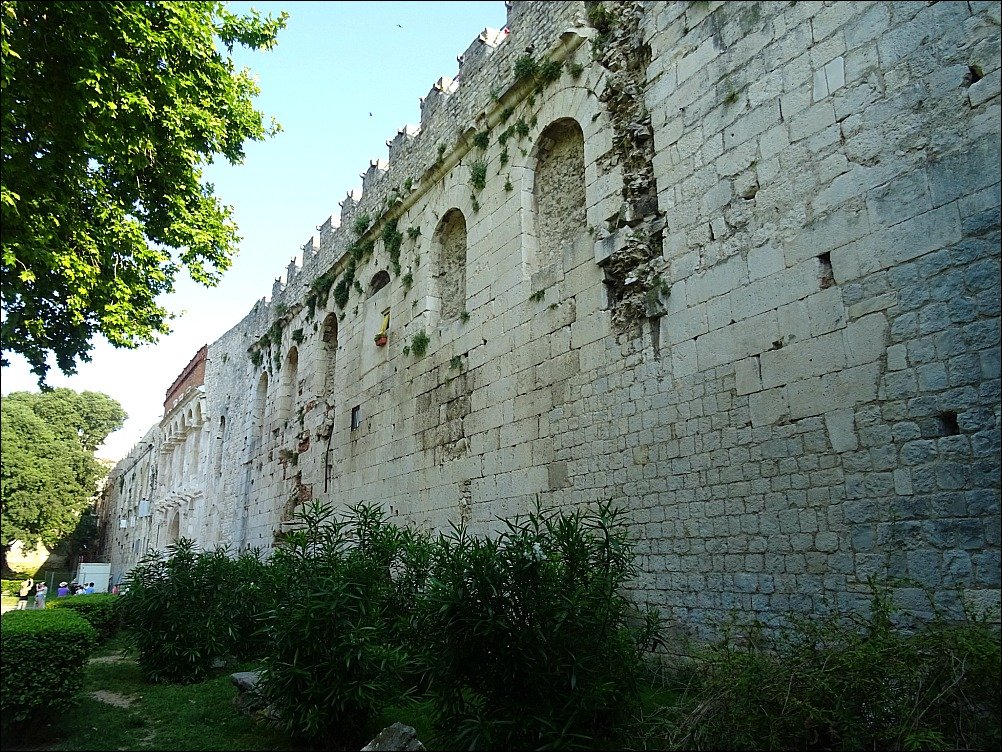 Situated outside of the Gold Gate today is a sculpture by the famous Croatian Sculptor Ivan Meštrović.

Come under the spell of the Gregory of Nin Statue.

Grgur Ninski the rebel medieval Croatian Bishop, abolished Latin in Services in favour of the National language. This brilliant move meant the congregation could finally understand sermons, improving the church’s standing dramatically. Pre WWII, the statue was located in the Peristyle, but Italian soldiers moved it outside the Gold Gate. The statue is lofty and imposing but his toe is easily accessible and is deemed lucky to touch – hence it’s shiny appearance.

In this photo Gregory’s toe is cunningly concealed by a photographer, but it’s easy to see the woman leaning over to touch it. 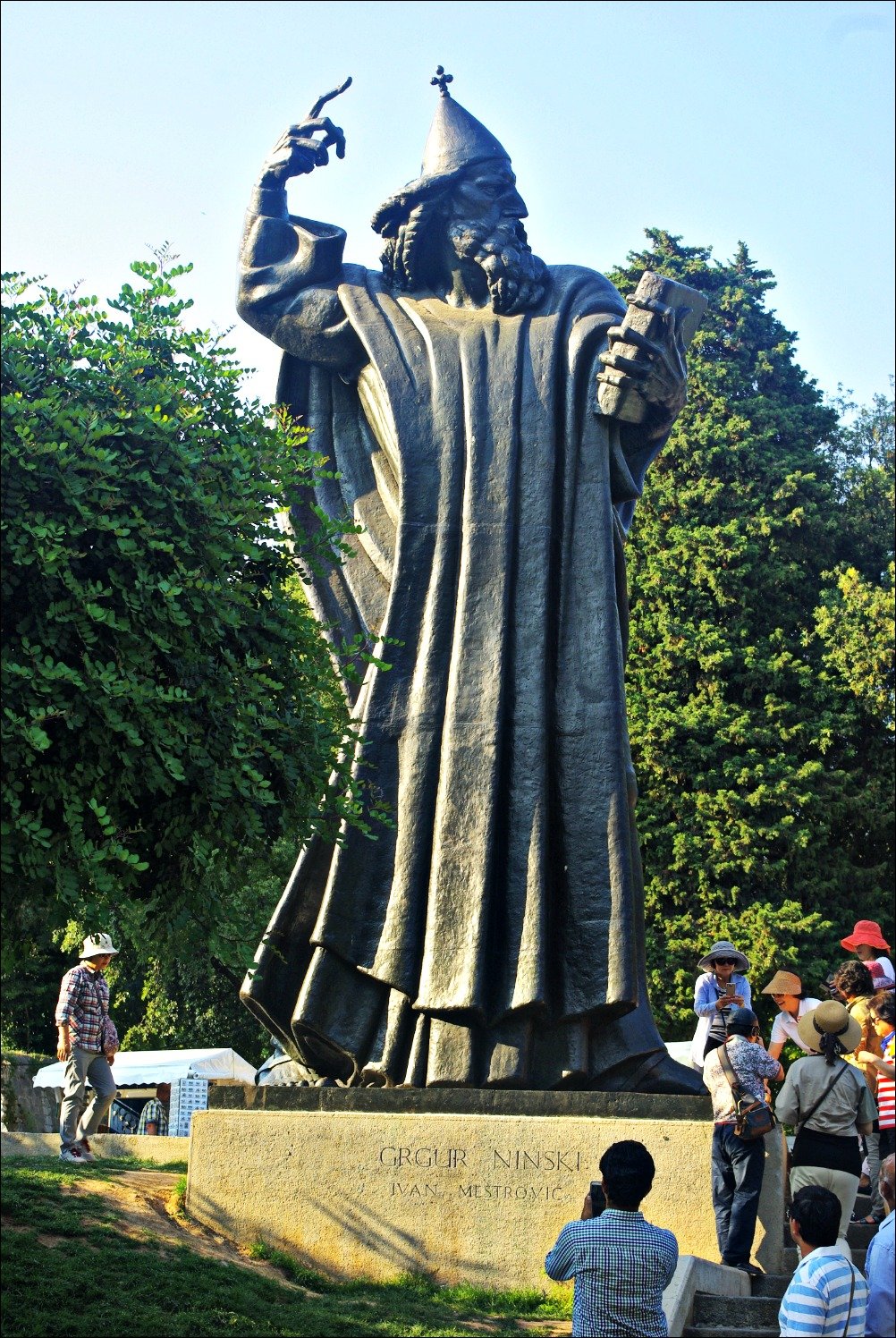 See the East or Silver Gate.

From without and within. 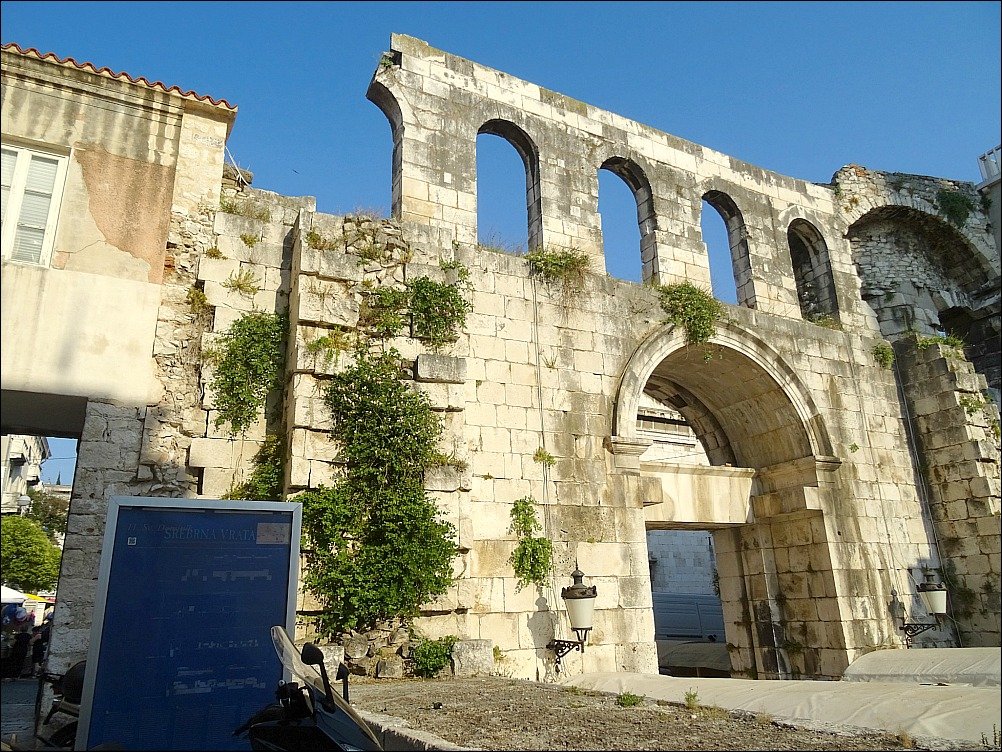 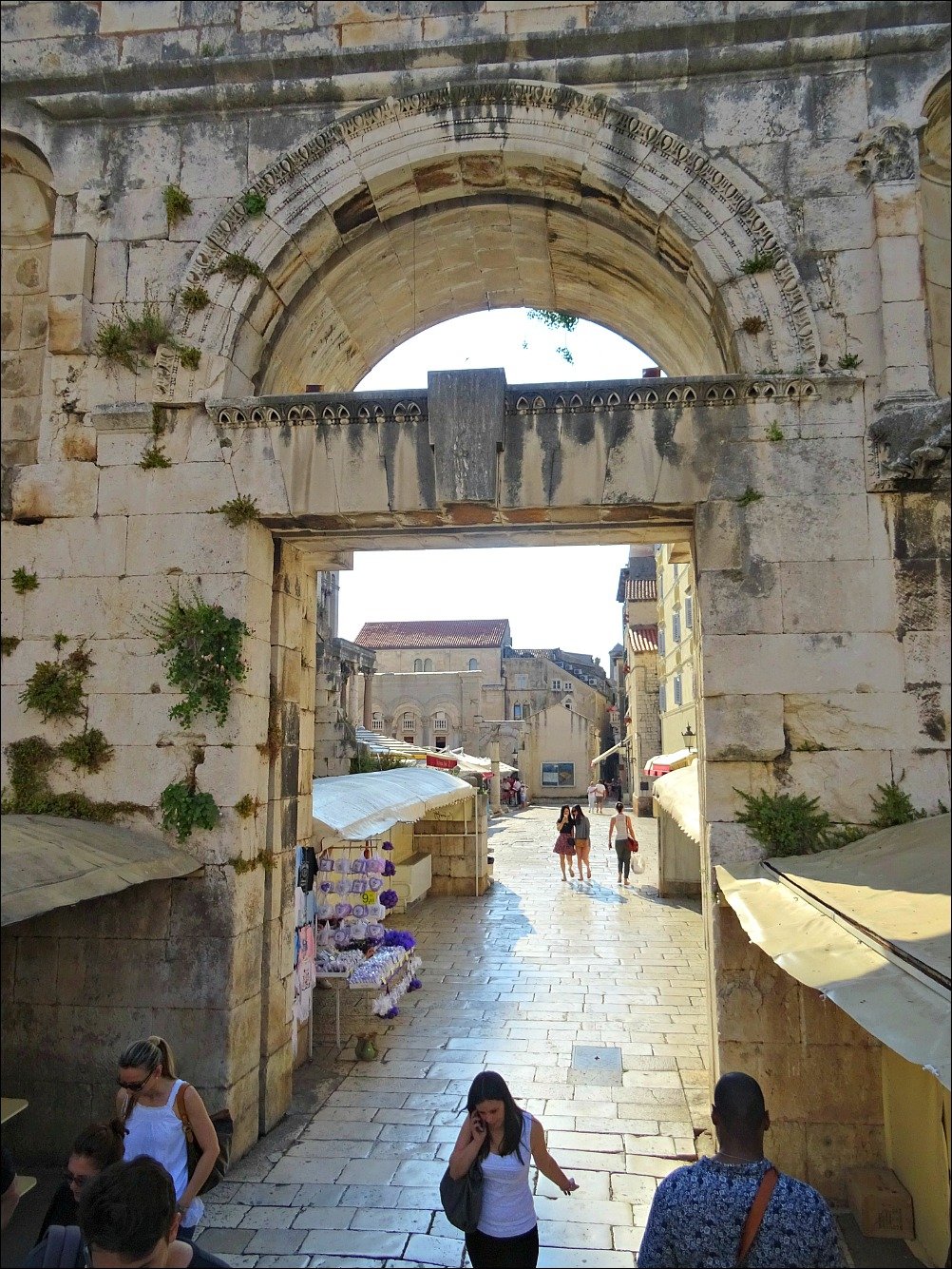 Buffed by thousands of feet, these paving blocks remind me of the shining streets of Dubrovnik. Between this gate revamped in 1932-34 and the Riva is the town’s green market.

The street that leads within the palace grounds from the East or Silver gate intersects with another leading from the North or Golden Gate at the Peristyle.

I smile whenever I view this photo taken looking up to the town clock and an advertisement for the 2015 Split Film Festival which we were lucky to attend. The festival takes place from 10-18th September in 2016. In 2015 it was held in an open air venue with bar, on the coast east of the city centre. All films are subtitled in English. 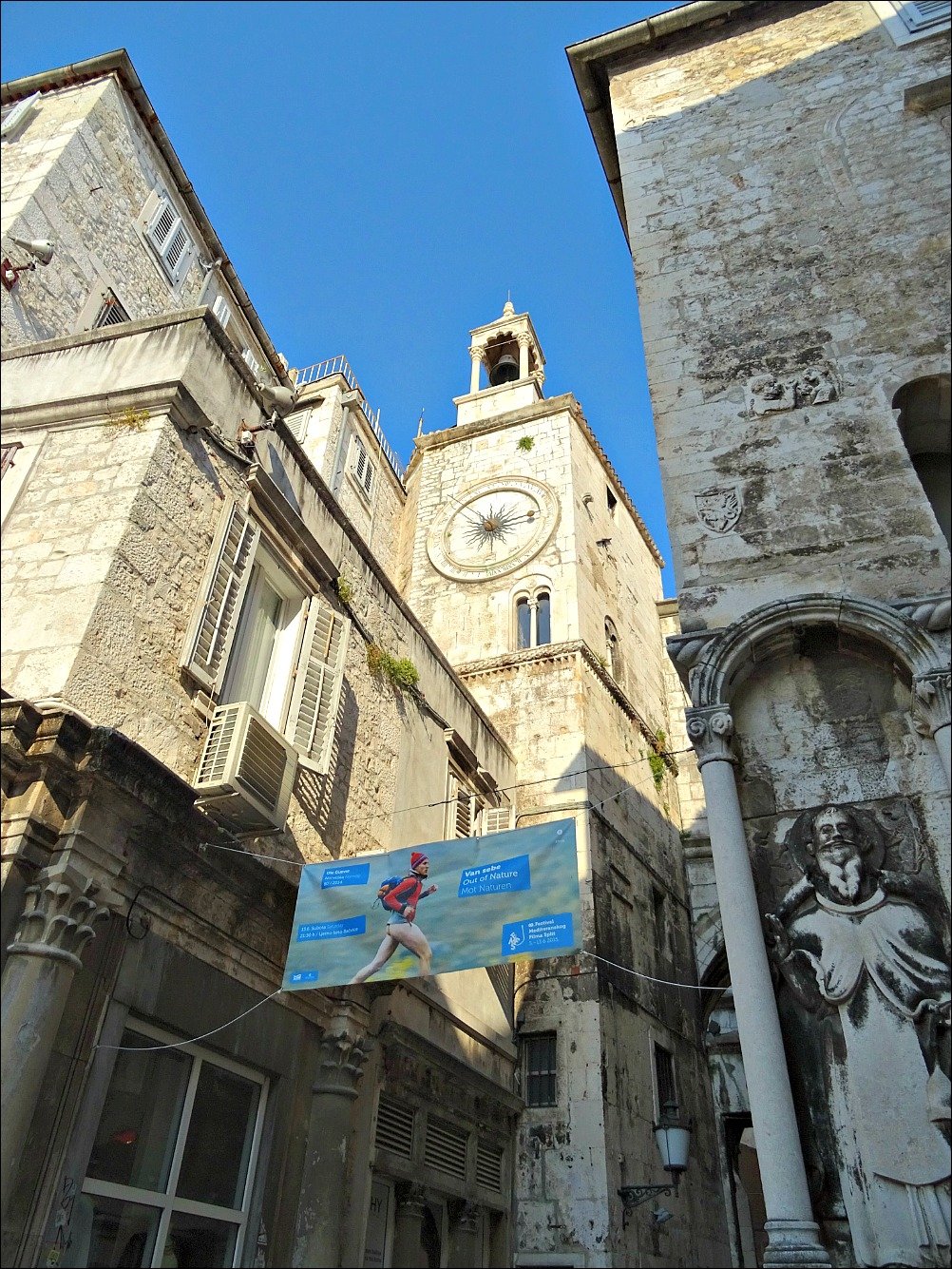 The Brass Gate was a functional gate – a tradesman’s entrance – from where goods were unloaded directly from boats and stored in the basements. The Riva area did not exist back then, with the palace built directly onto the ocean.  The basement layout is the same as the palace rooms that once existed above. A circular basement room amplified sounds into Diocletian’s bed chamber. He specifically asked for this so he would be alerted to treacherous persons entering through the Brass Gate. It is interesting to note that he was the only one of four Emperors who ruled conjointly, to die of natural causes.

Shop in the Palace Basement

Today the basement houses jewellery shops and the like. Another part of the basement was only discovered in 1956 – it had been used as the palace garbage dump and some believe the rubbish actually preserved the structure.

The basement corridor connects the Riva to the steps that ascend to the Peristyle. 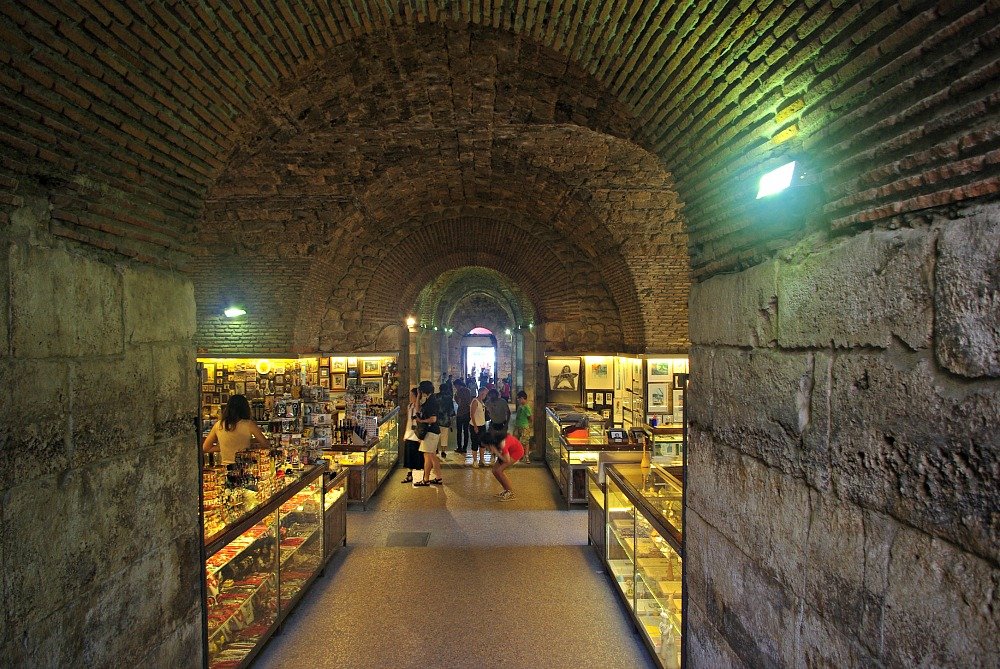 The layout of the Palace is a simple rectangle divided into four. 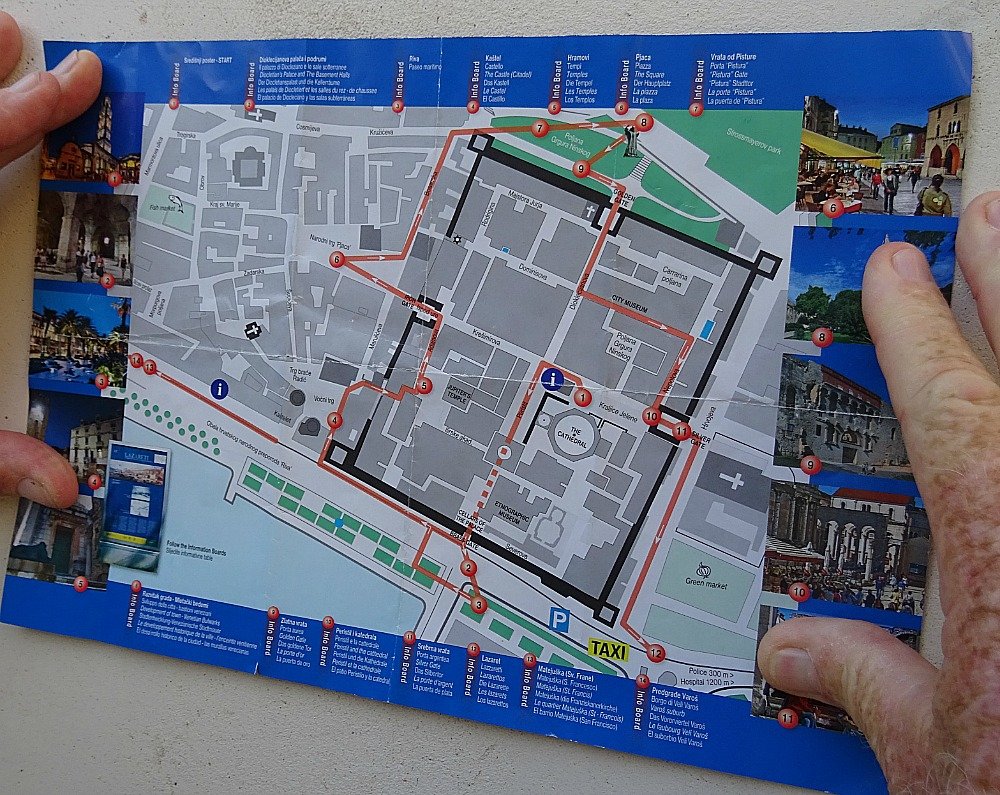 The above sites are impressive but what makes the Palace so great is it’s accessibility.

While fossicking in the market, come upon the East Gate and divert inside the walls for lunch or shortcut through to Narodni Trg.

The Split Palace history is special, but it is also a very real part of life in Split and the best of free things to see in Split.

Other cheap and free things to do in Split are:

Buffet Fife is a great place for lunch or dinner and it’s right at the end of the Riva. Eat there before a night on the town or for a filling cheap meal. It really is good.

Eat Splitska Torte – It is a traditional cream cake made locally in Split.

If you’re ready for more try these Get Your Guide Food Tours in Split.

Although the Diocletian’s Palace and off-shore Croatian Islands are the major draw card in Split, her beaches and in particular Marjan Peninsula are also very popular free things to see in Split. We recommend spending a relaxing and cheap day cycling the peninsula and walking to town beaches?

Walk through the historical streets

This pretty town clustered by it’s port and blue ocean vistas is a beautiful place to walk. See things like:

Read about how to see these free things to do in Split here.

Watch the Sunset over Split

There is nothing more romantic than a sunset cruise and on the good ship Polaris you can do so with unlimited drinks and acoustic guitar or similar accompaniment. This GYG tour gets awesome reviews and is a budget friendly sunset cruise as it includes two hours of drinks and some nibbles to share.

Climb Marjan hill for a free sunset view back over Split. Marjan Hill is situated at the far end of the Riva near the ocean. The views are best from the lookout after the stairs not from the top.