Arriving at St. Lawrence just before sunset works perfectly for viewing of the wetlands located behind the Recreation Area. Dawn and dusk are the best times for Kangaroo viewing and photography. Despite having driven past the turn off many times on trips from Townsville to Brisbane, we had not investigated the town previously.

This time we found the St. Lawrence free recreation ground on the WikiCamps Australia App and spent the last night of our Townsville to Gold Coast Caravan trip, there.

The town is tiny really but has a vibrant past.

In the late afternoon the wetlands, shrunken due to drought conditions, attract a large mob of kangaroos. A zoom lens is required to photograph the kangaroos when the water level is low as they stay near the water and the walkway is fenced.

Kangaroos getting in some fighting practice. 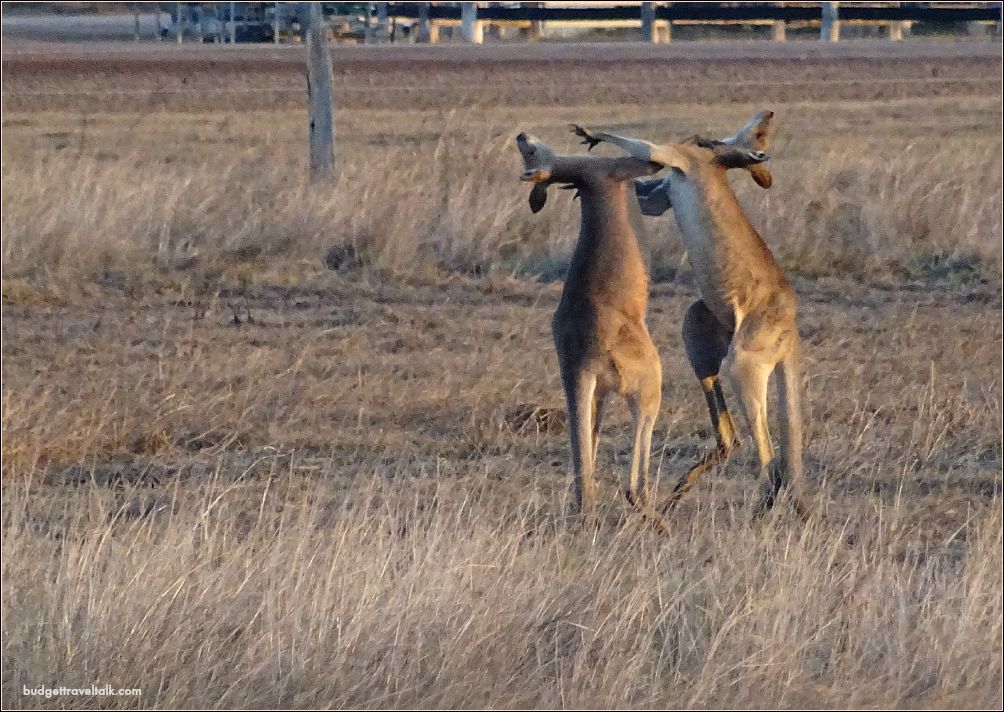 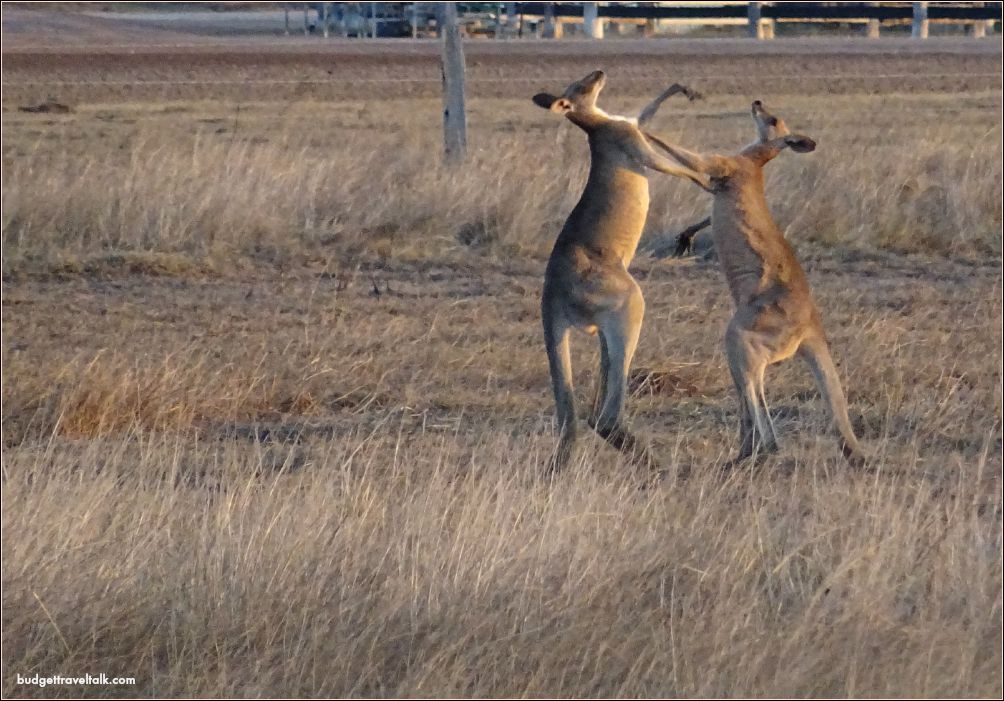 When the well maintained dirt/gravel track to the wetlands turns left, another continues on to who knows where. The walkways seemed extensive and well planned.

The boxing Kangaroos were too engrossed to worry about intruders, but some others pricked their ears up and kept watch.

A timber hide structure overlooks the billabong where black swans, geese, ducks and Ibis are silhouetted in the setting sun.  The wetlands support a straw-necked Ibis population of 15,000. 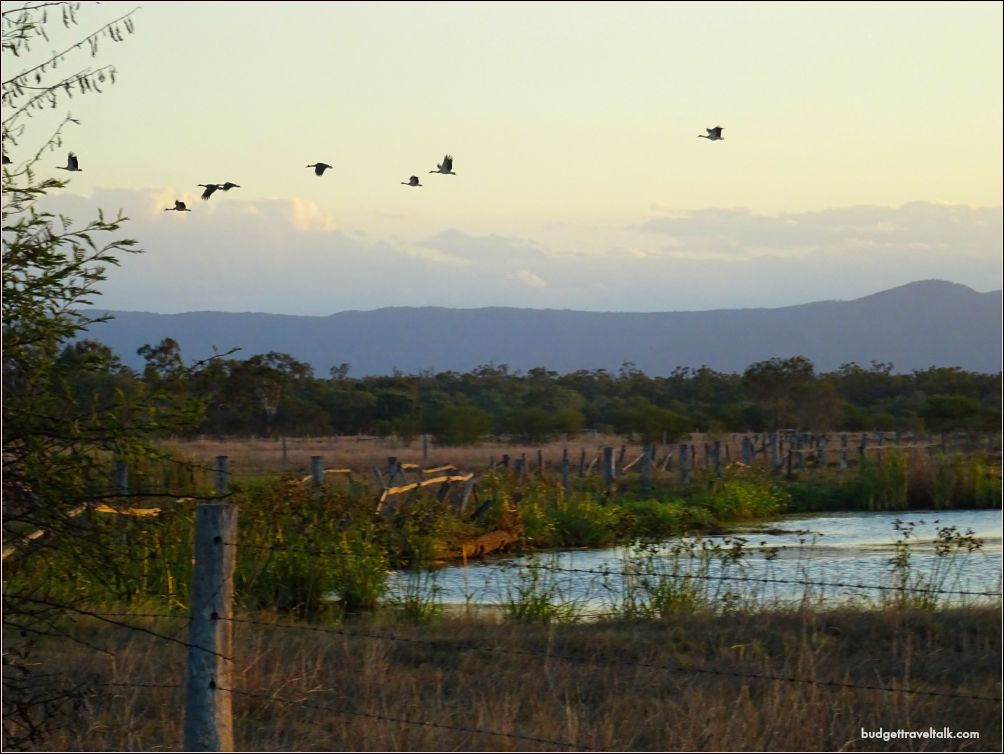 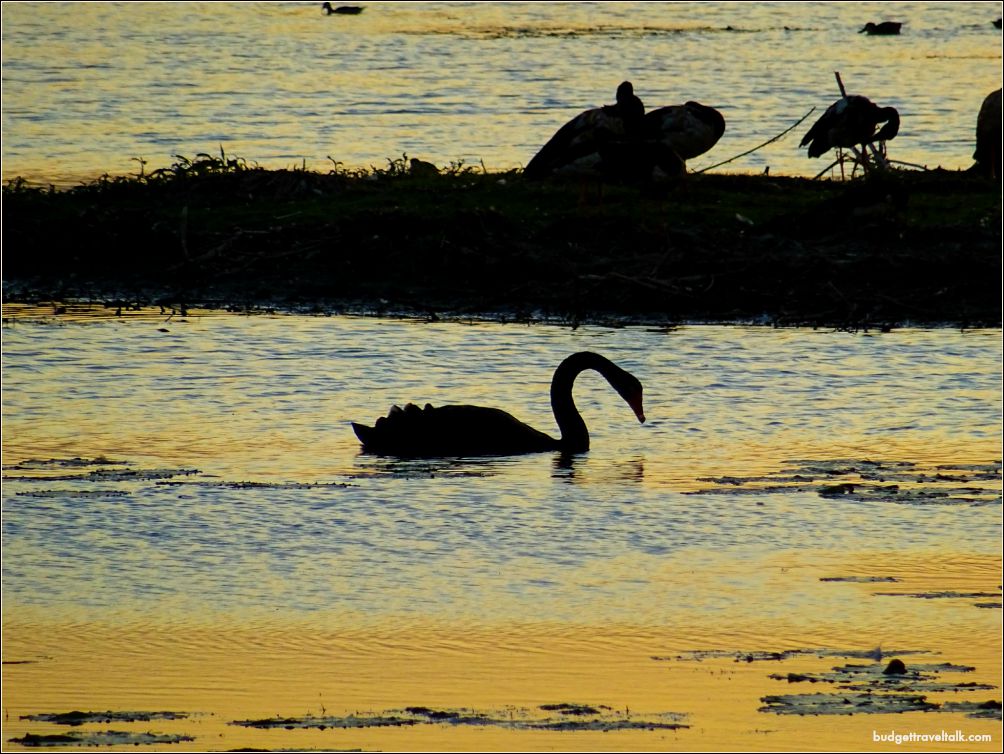 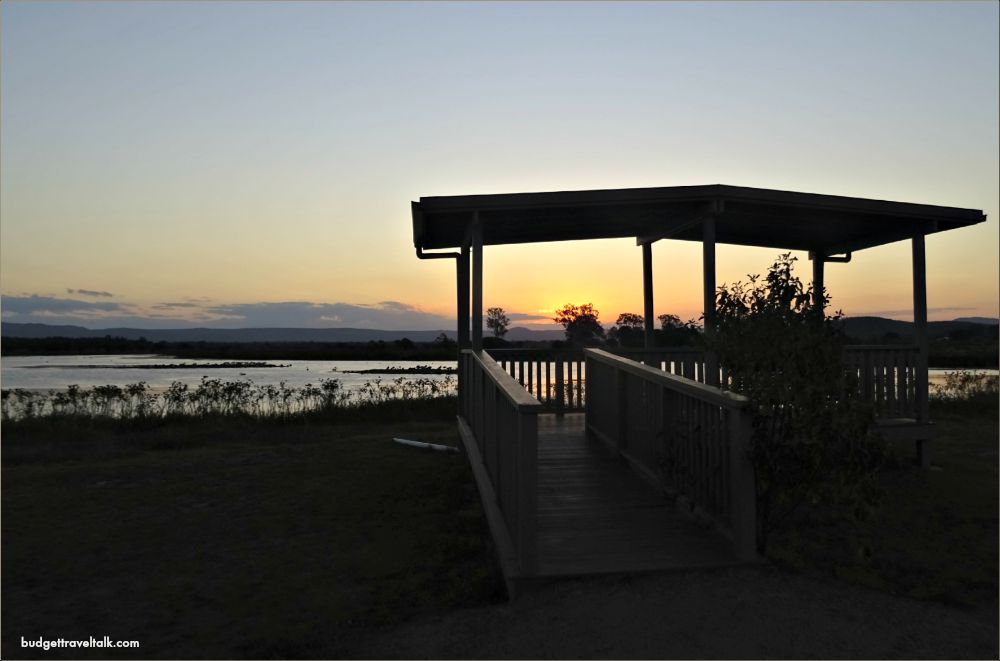 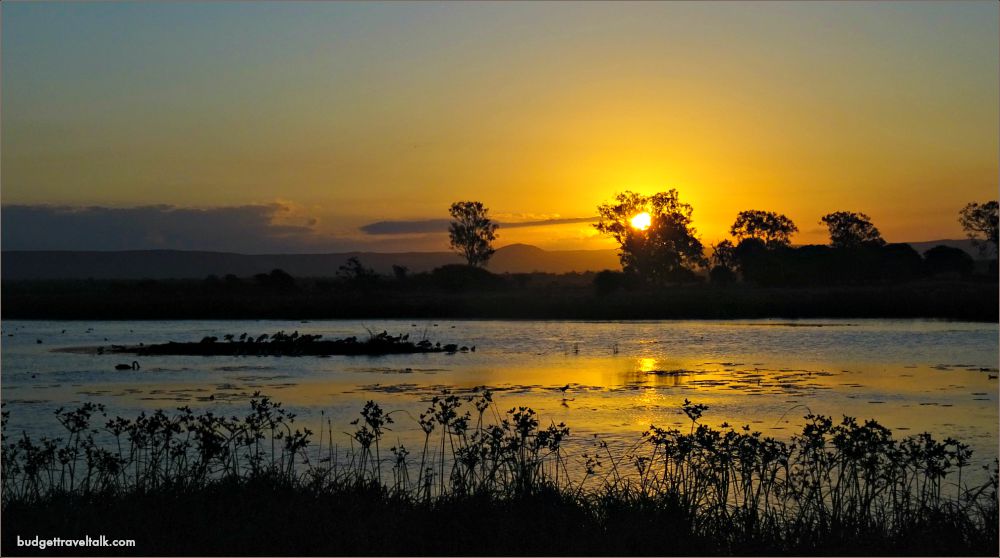 The St. Lawrence town population is only 160, however the streets are wide with some nicely restored old buildings. Established midway between Mackay and Rockhampton, it became one of Queensland’s first ports. A meat-works opened in 1893, exporting both canned and casked meat until 1903.

The Court House and Police Station built in 1870’s.  Painted in original colours, it was last used as a Magistrate’s Court in 1992. 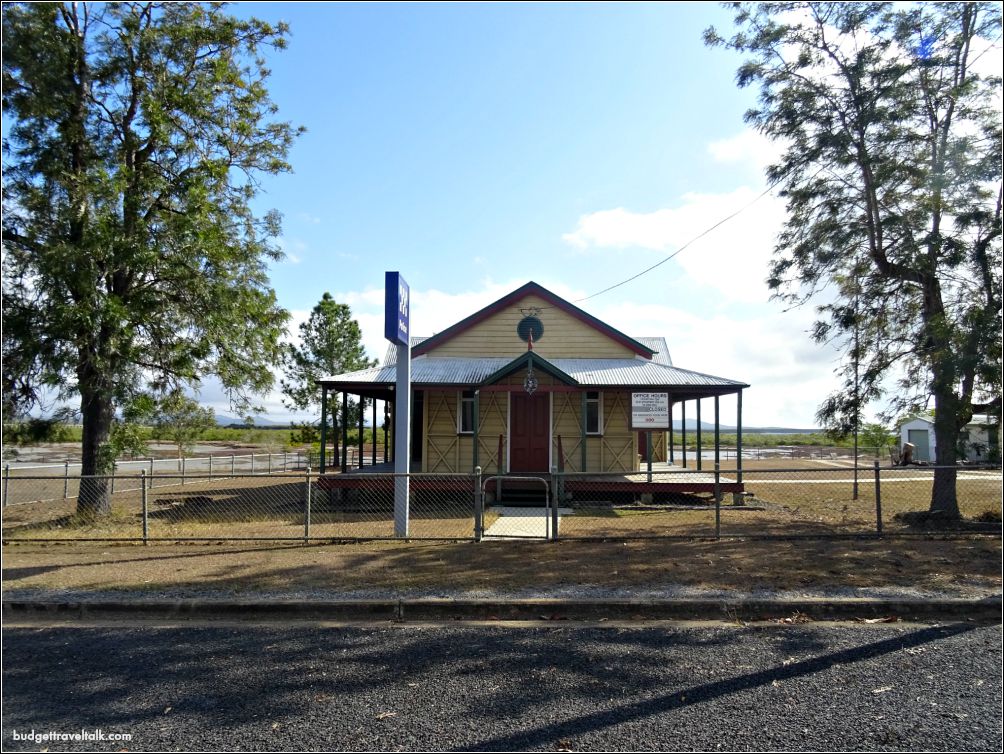 Originally the Customs House then sold to the Broadsound Council in 1901. 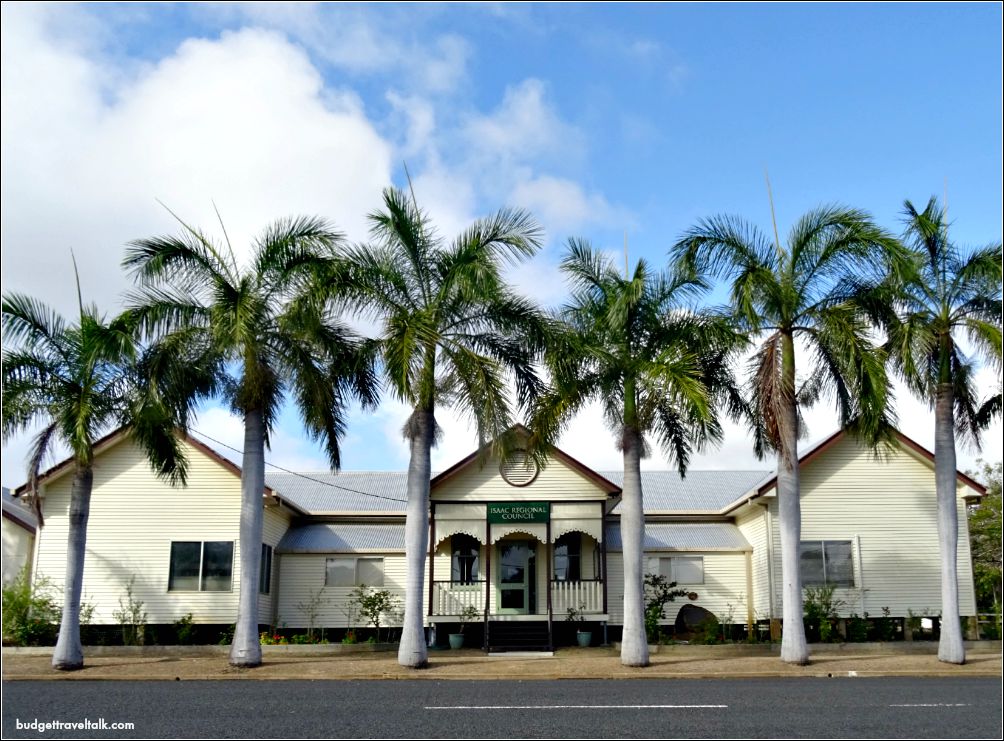 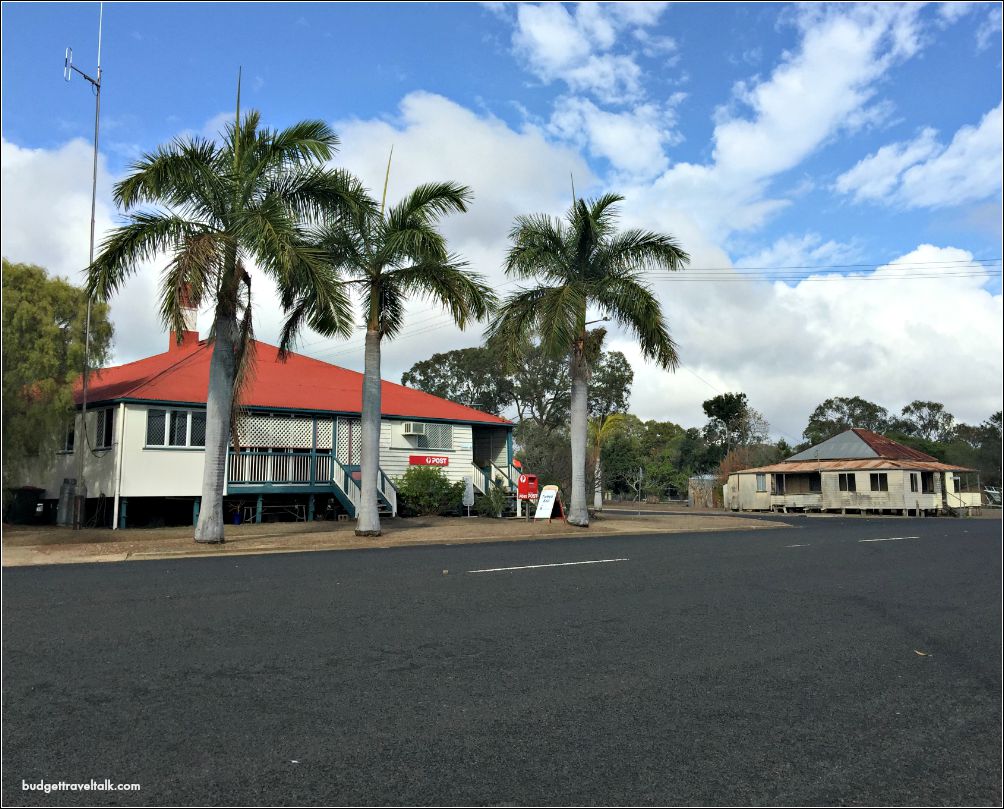 Bottom Right. The library is the old Railway Building restored. The pub is closed Mondays. 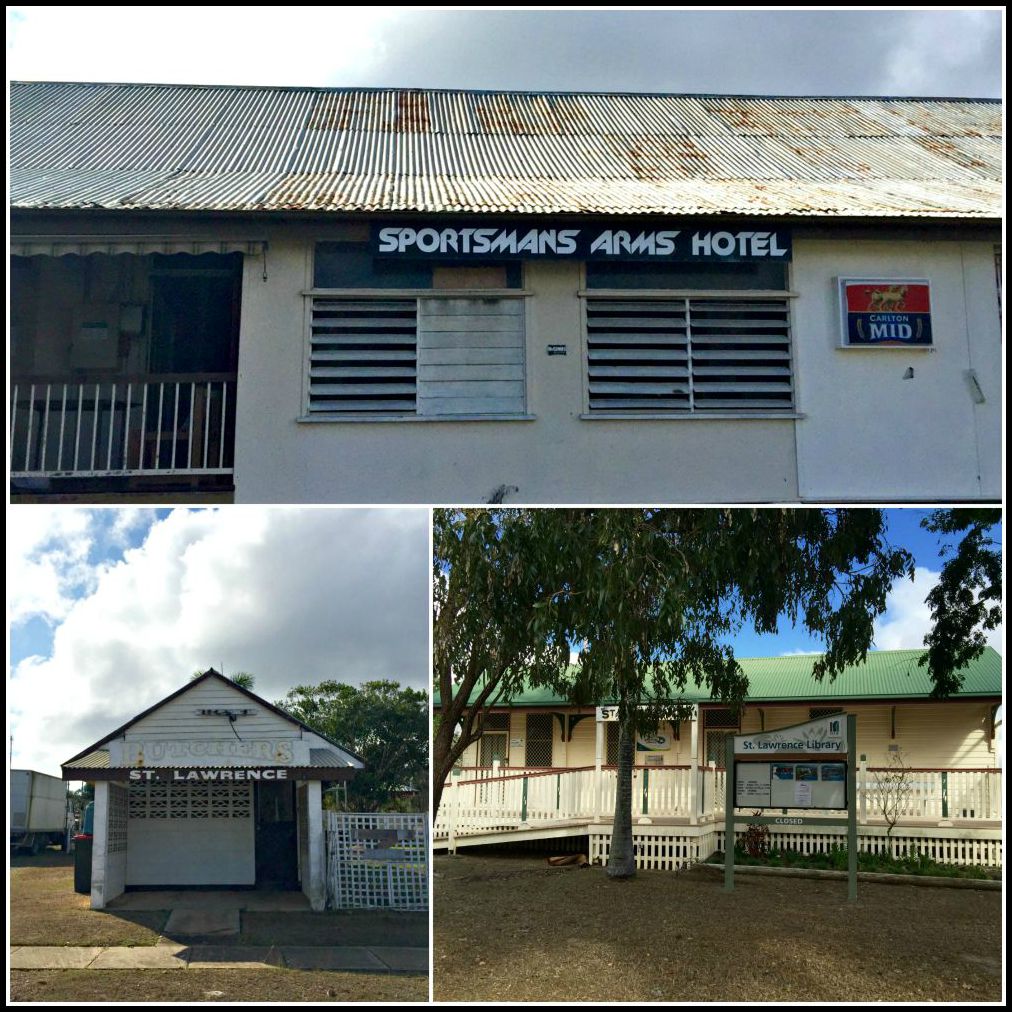 The remains of the meat-works – a collection of rusty boilers and a scrap heap of metal offcuts – are down Settlement Road near Newport Conservation Park.

These century old relics could easily be mistaken for an Aussie Bush Art Installation. 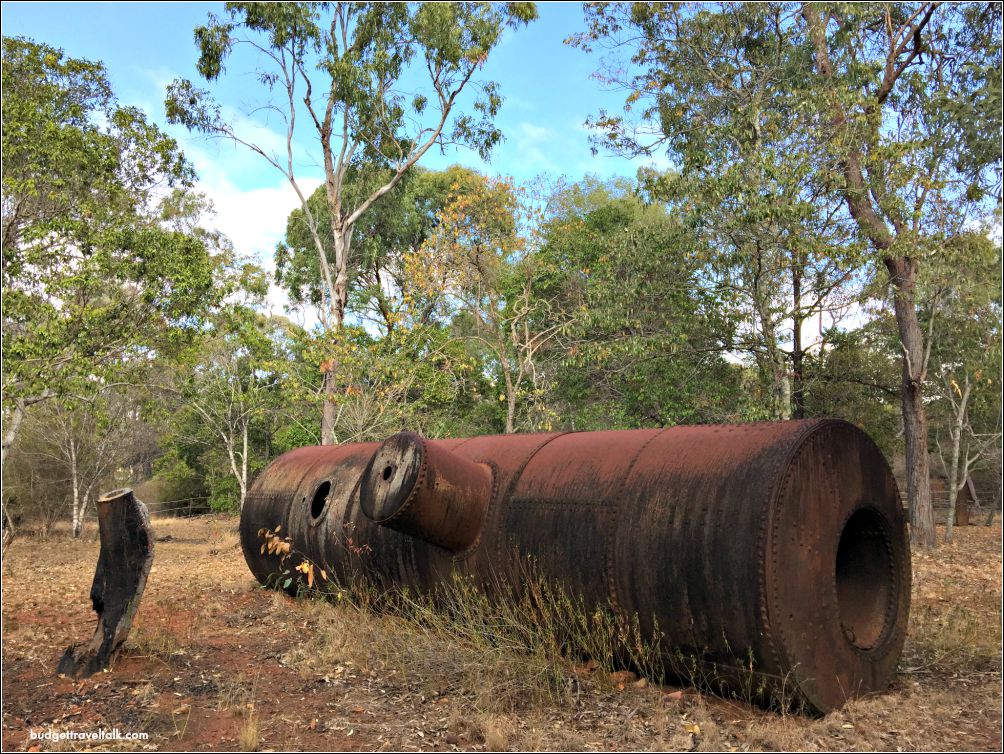 A short drive through the conservation area leads to Waverley Creek boat ramp, confusingly located in Meatworks Creek! Broadsound, the bay the town is built on, is known for it’s 9 metre tidal range, the largest on the East Coast of Australia. The theory is that St. Lawrence was named after Canada’s St. Lawrence River which also has huge tides.

The boat ramp totally covered by the previous tide,  now with only a trickle of water in it. 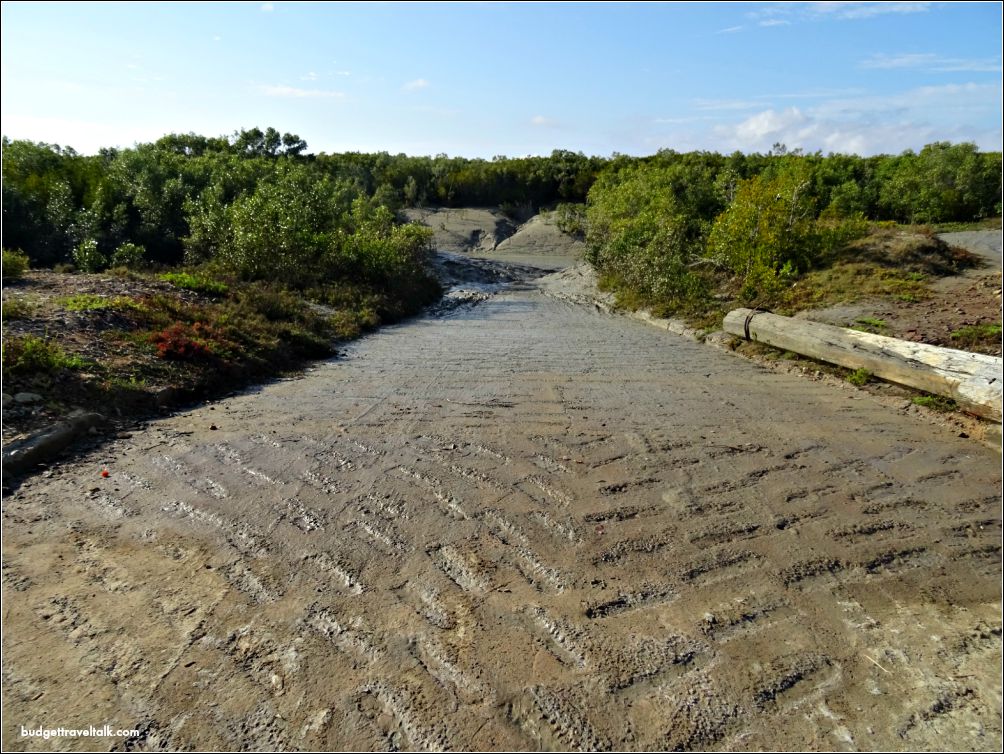 To the right of the boat ramp, a board walk takes a right turn behind the mangroves before narrowing and becoming a slippery mess. Evidently it culminates in a jetty built by a professional fisherman.  What state the jetty is in is anybody’s guess. 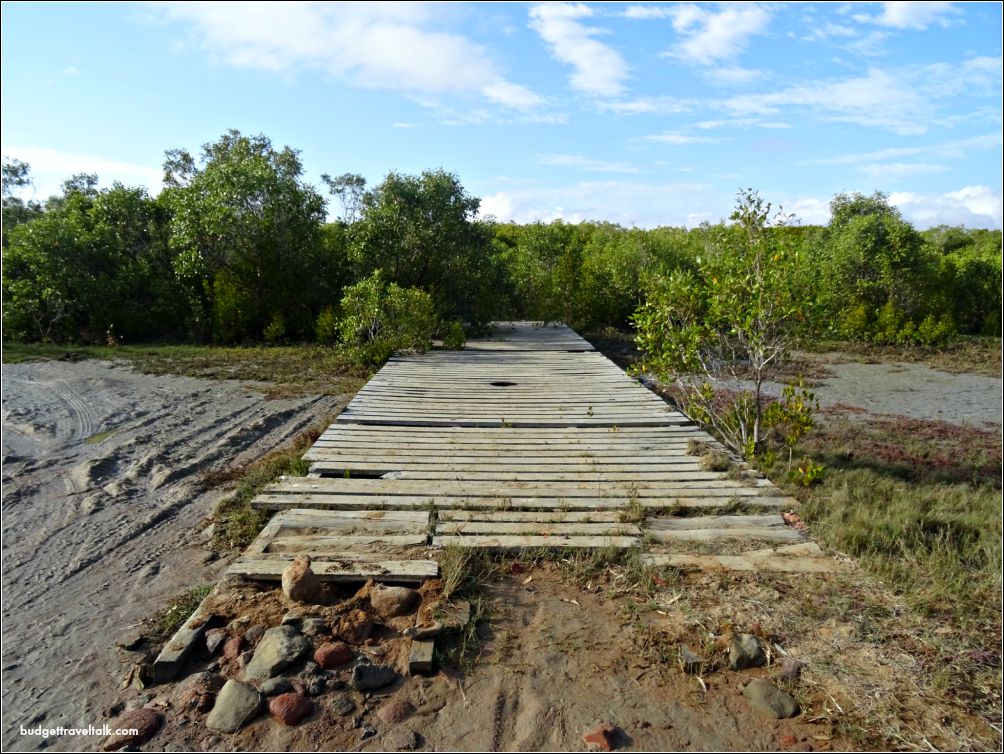 I started asking questions about the history of St. Lawrence and was thrilled by this quote from a local.

The history of St. Lawrence is a very interesting one.  It was an important place back in the 1860’s and 70’s when it was also known for Goats, Girls, Glass Bottles and Grog.  In it’s hey day there were 4 pubs and the streets were packed with horse and bullock teams making their way to the wharf with loads of wool and copper from the interior.

The following photos were provided by Meg Sargent from her father’s collection. 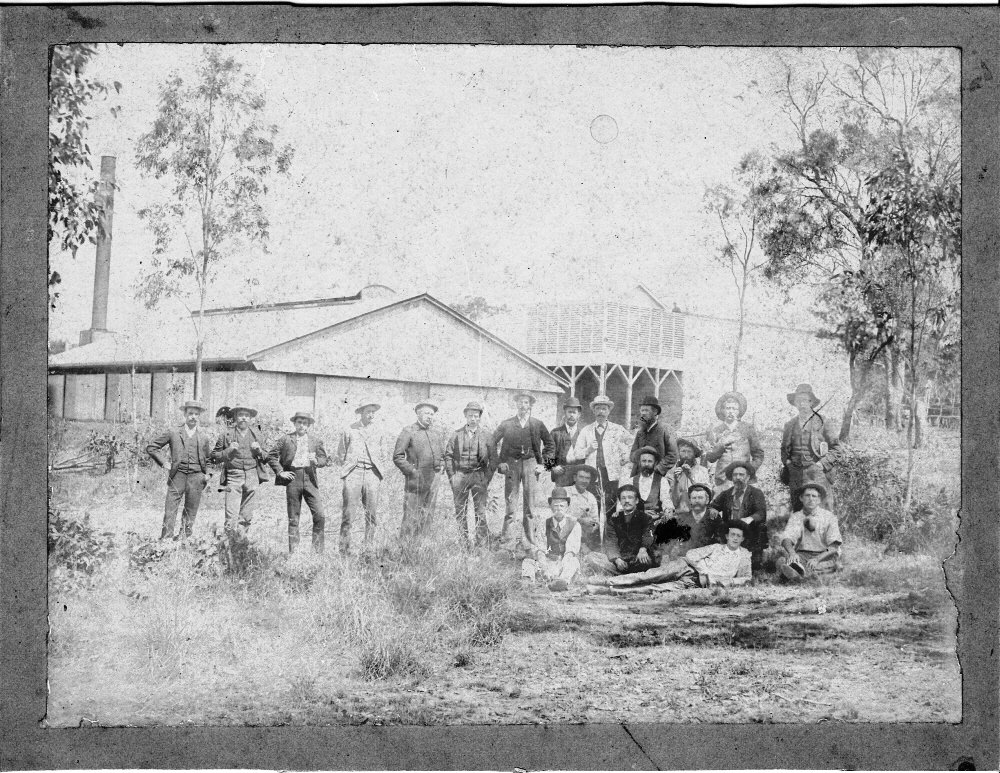 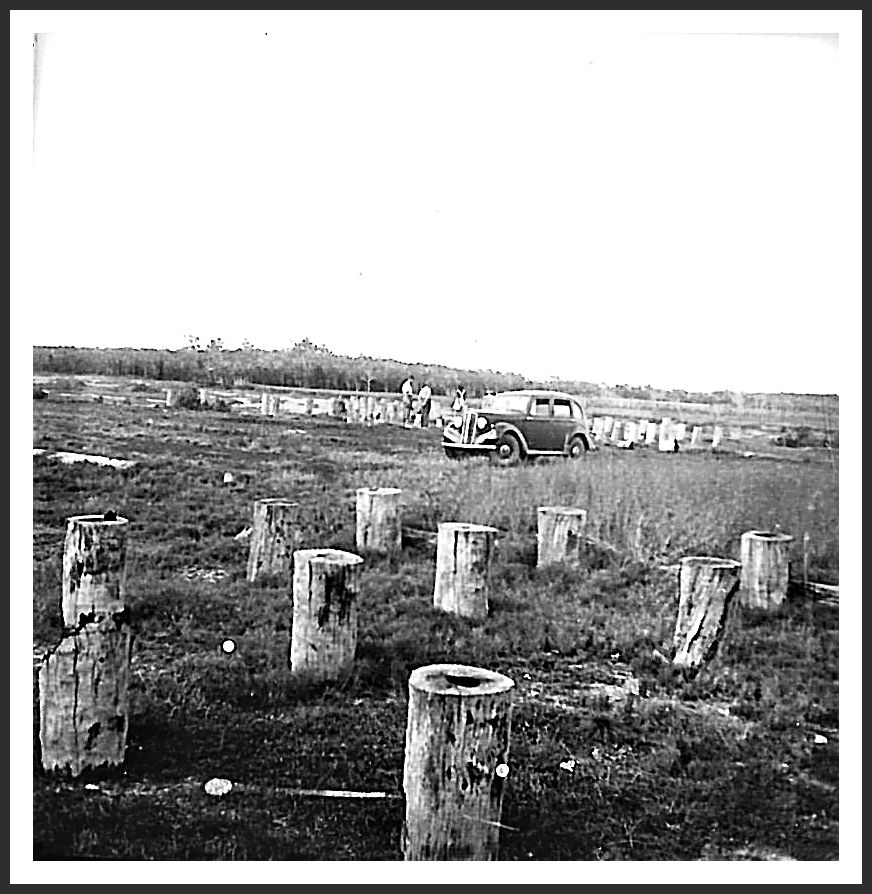 The Brinwar ship at Waverley Creek Wharf.  It was later destroyed in a 1918 cyclone. 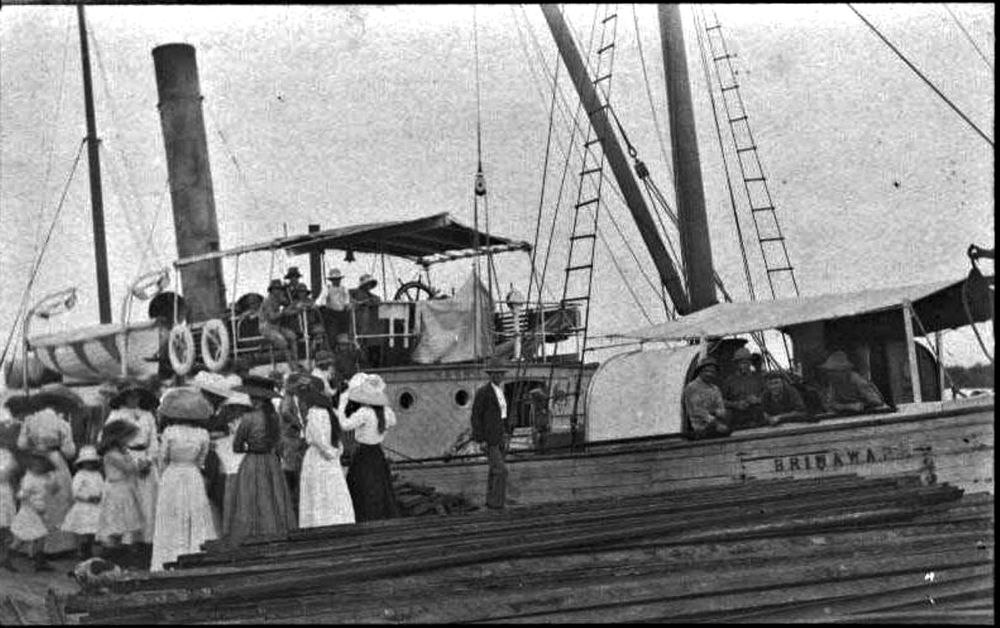 The amount of people drawn to out of the way towns by free/low cost camping can only boost local economies.

At the moment the Recreation Camp Ground is free/donation, but will change to $10/night/camp by Parkmobile App shortly. Signage will be erected when this takes place. The camp has a tiled amenity building with free cold showers and gold coin operated hot showers. Considering the nearby wetlands which can be accessed without charge from the grounds this is excellent value.

Centenary Pavilion houses some old farm machinery and relics. (Near the tennis courts)

Seasonal fruit and veg stall on the road between the Camp ground and town.

Good fishing and crabbing (watch those tides though).

This post is linked to Noel’s Travel Photo Discovery.  Noel shares his amazing photographs on Travel Photo Monday.  This week from London.

I am co-hosting Travel Photo Thursday with Nancie from Budget Travelers Sandbox – add your link at the bottom!