If I were given the task of filing Sicily into a suitable Destination niche, I would struggle to categorise this island of contradictions.

After experiencing the Seductive Streets of Siracusa I might be tempted to slot this most beautiful city of the Ancient Greek Empire into the Enchanting Box.

But Ortigia Island, the historical centre of Siracusa is home to some sights with a definite Strange leaning.

Crossing over the causeway from Siracusa and turning left leads to the Eastern side of Ortigia and an interesting etched window on the corner of Via Trieste and Vittorio Venetto. An interesting and mysterious mix of Greco/Latin/Asian that defies description. 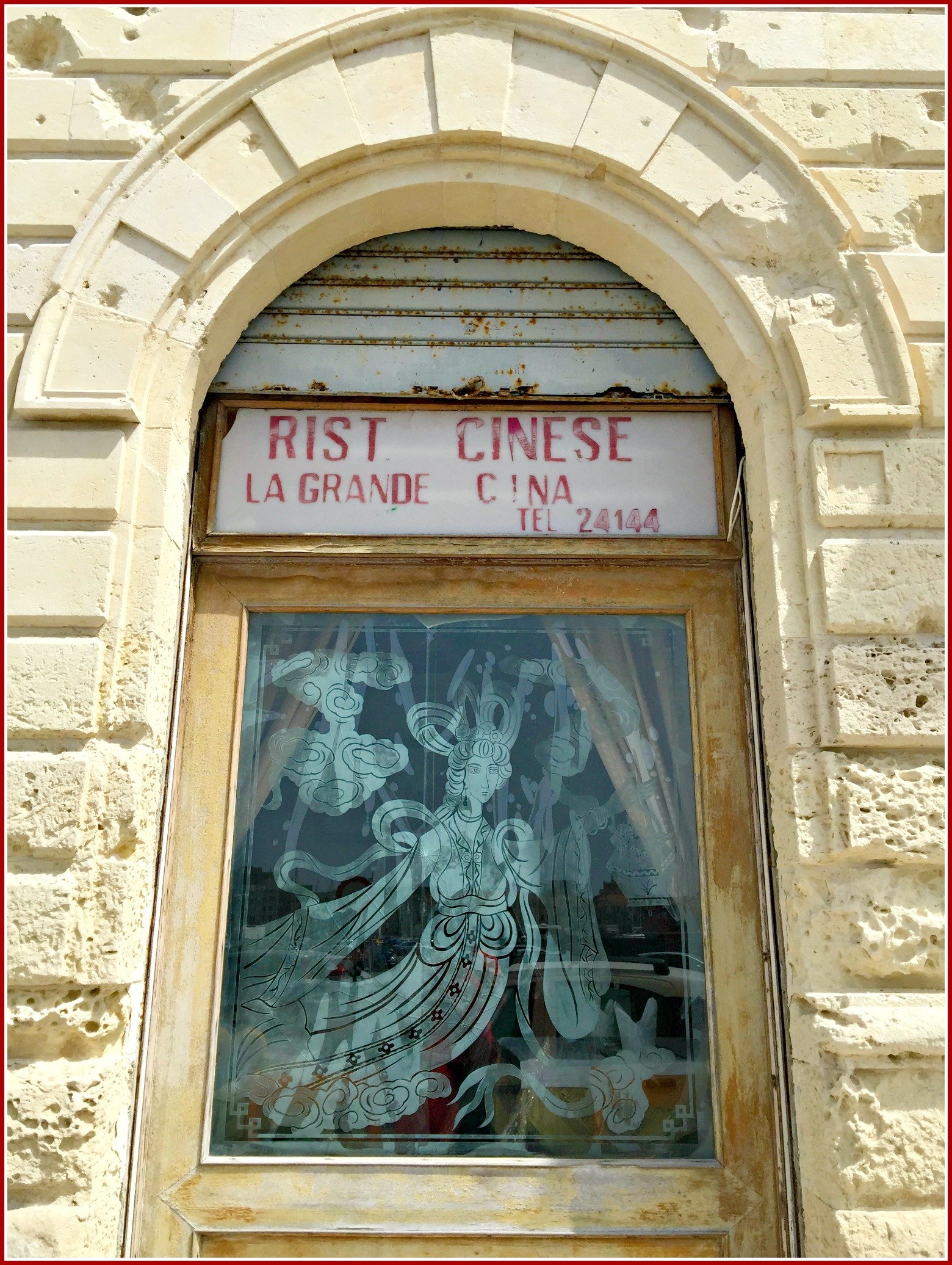 Our aim on this particular day was to walk along the extremities of the island, starting in the east and staying as close to the sea walls as possible. While the centre of the island is tightly packed with historical buildings, after leaving Rist Cinese, we quickly came upon a wasteland of concrete, that defied description.  A carpark that appeared deserted lurked beneath this brutalist slab of concrete. It filled the area between a large and smaller breakwater and was home to rusted seats, planters and a playground from hell. 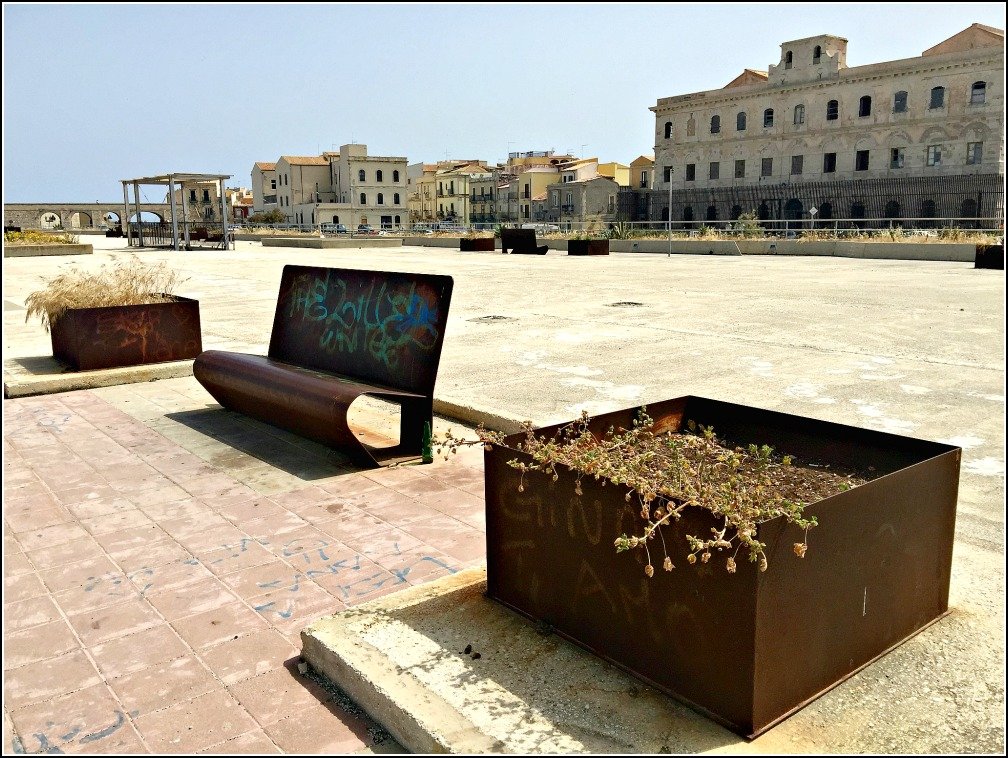 Only the wildest of flowers survive here. 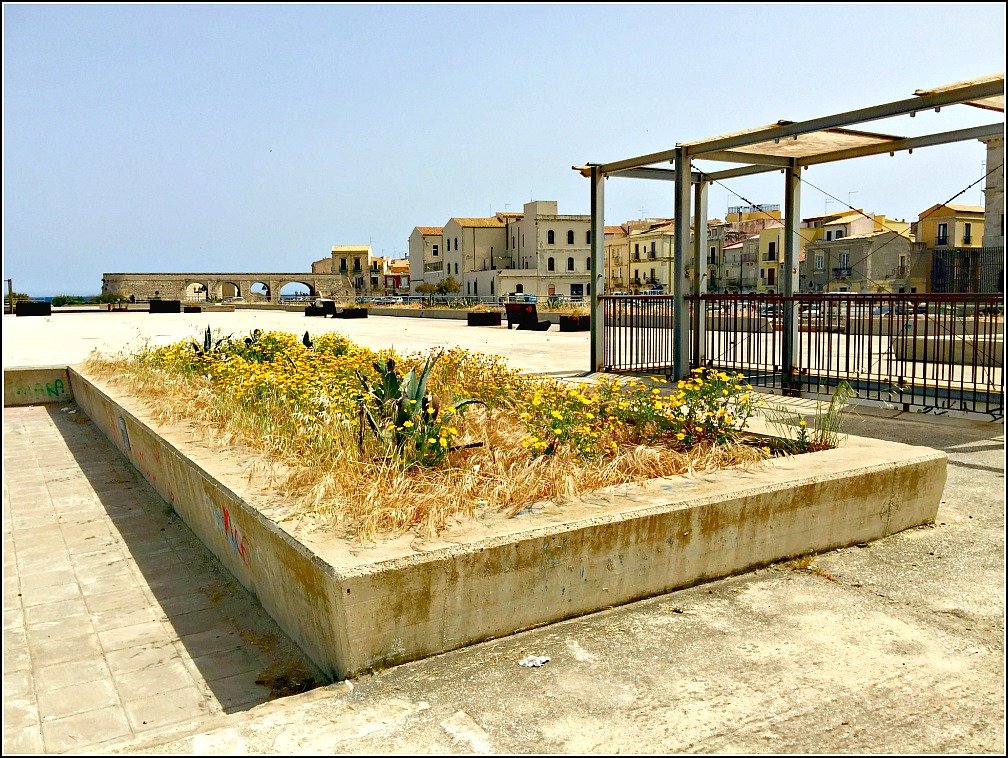 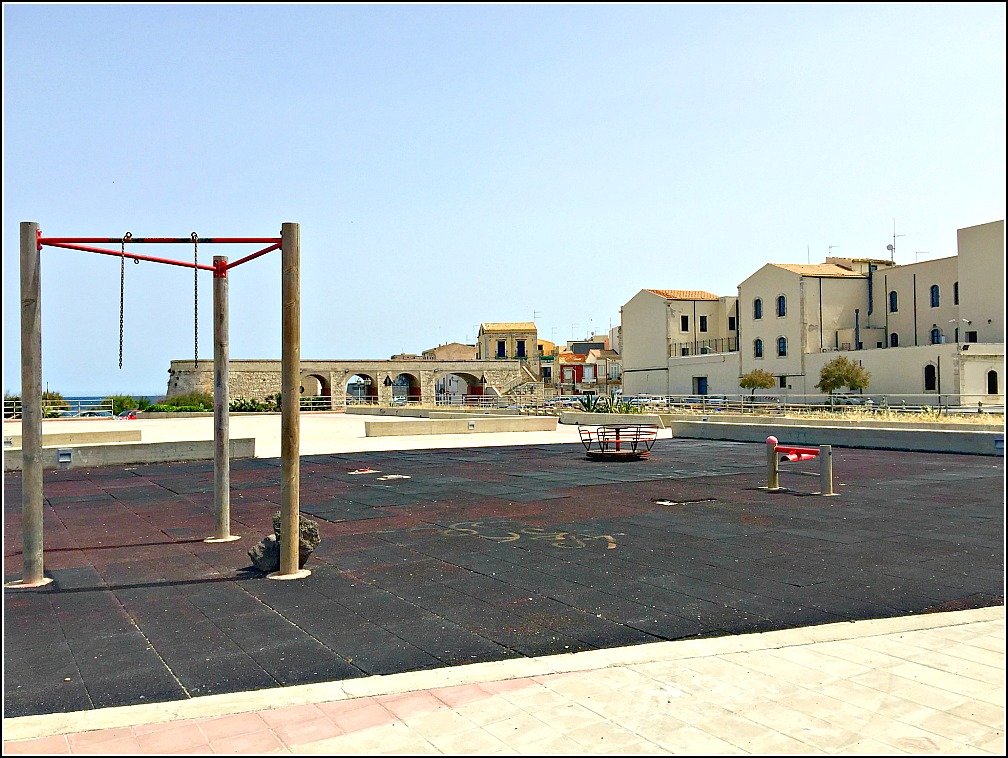 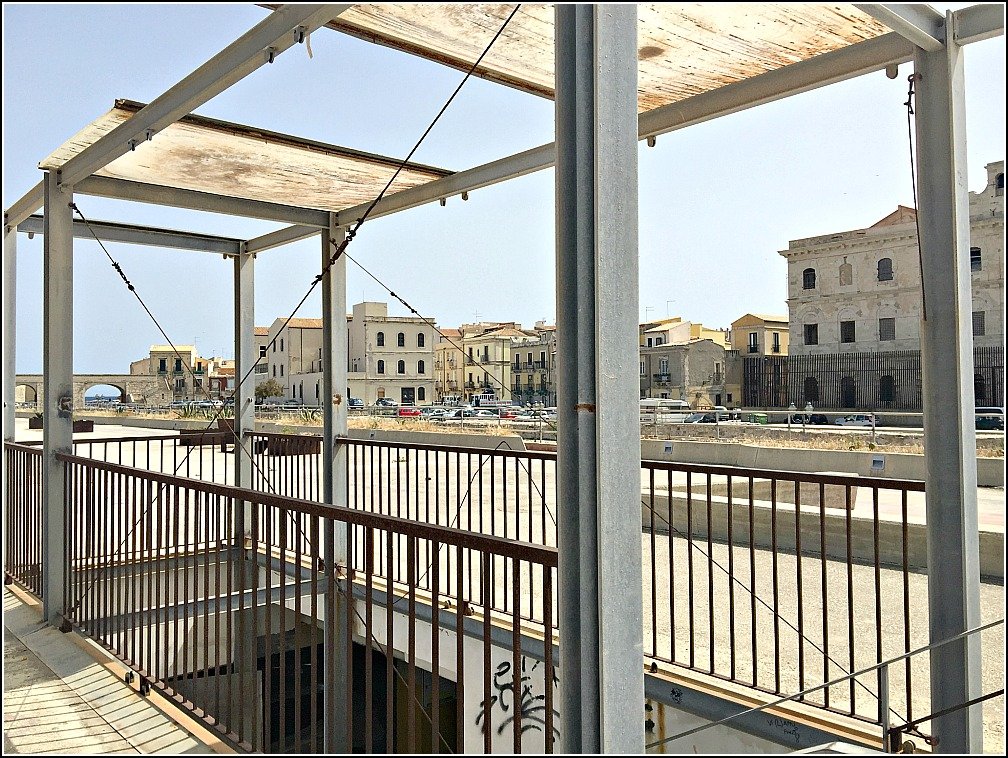 Looking back to mainland Siracusa. 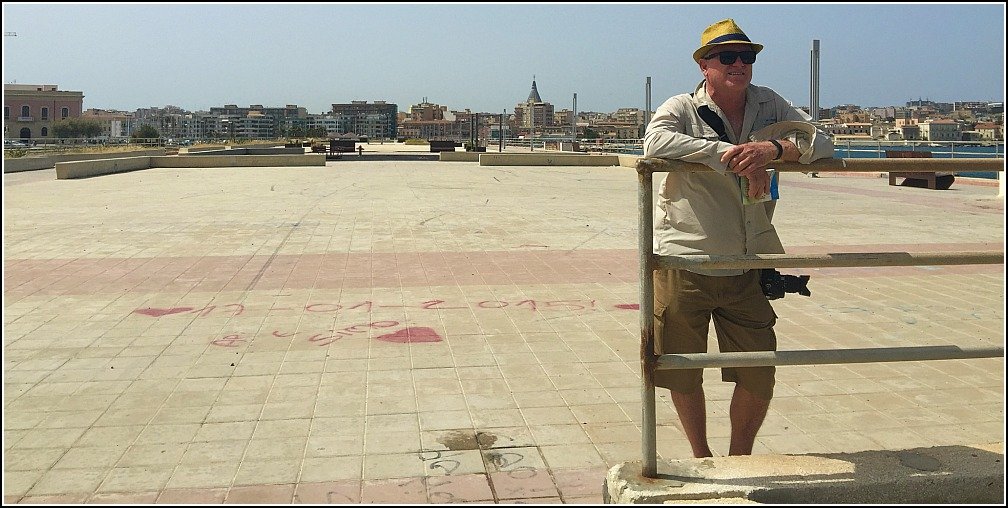 Marty peering into the abyss, the larger of the breakwaters in the background. 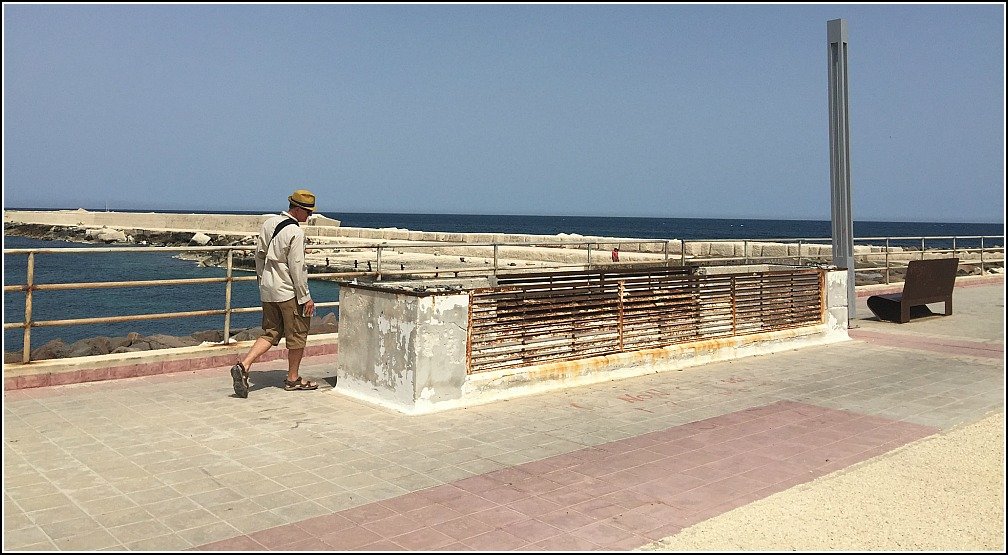 Continuing on through some city gates and still clinging to the sea edge, things became more normal. 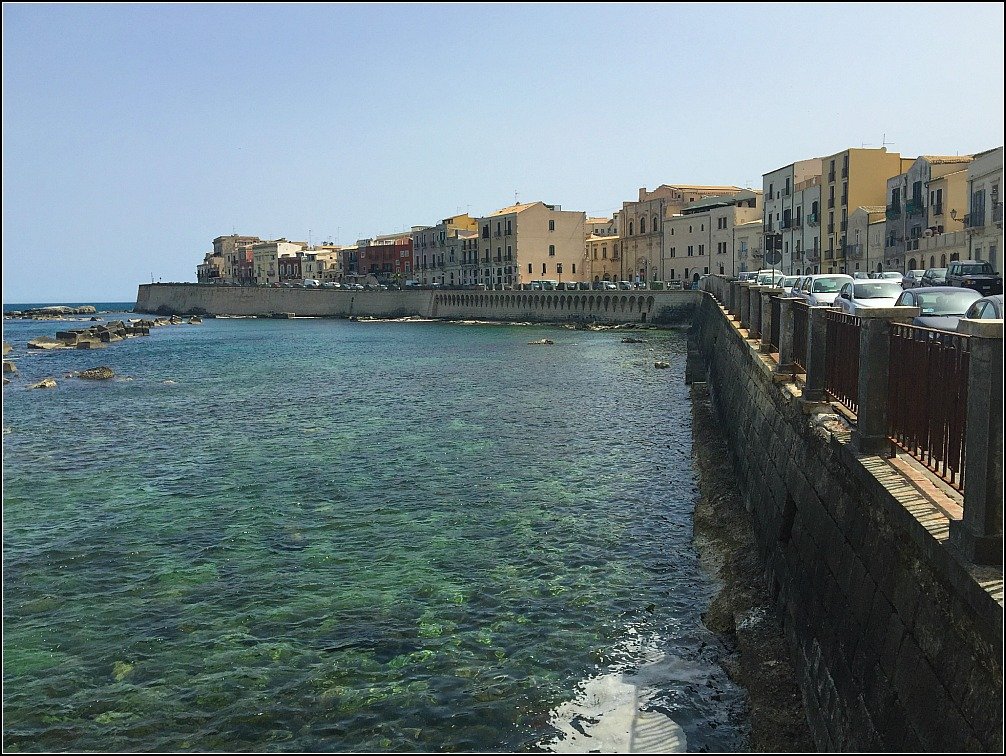 Steel ladders scale the seawalls periodically, either for sailors to ascend or swimmers to descend, but then we reached the swimming platform at Via Nizza, being refurbished ready for the deluge of sun-worshippers.

Swimming Platforms look strange, but in fact are a practical solution to the lack of natural beach areas in Ortigia. There is however a pebble beach accessed by steps opposite Royal Maniace Hotel at 12 Lungomare d’Ortigia a little further along this walk. 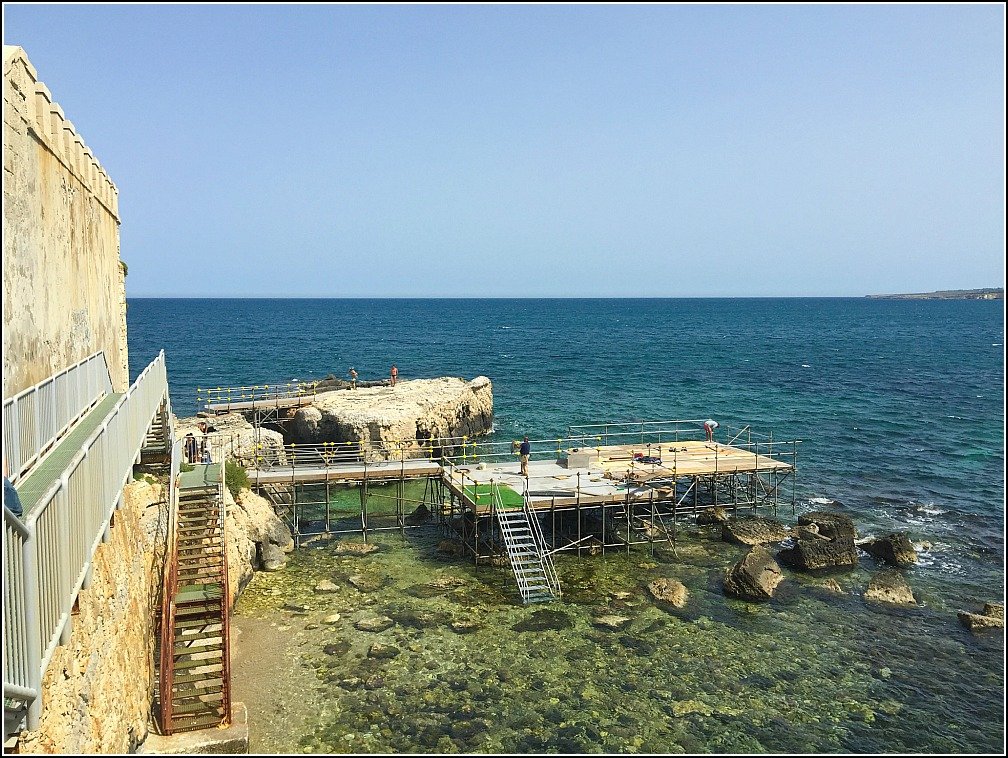 Another unusual sight was discovered in 1989, 18 metres beneath the Residenza Alla Giudecca hotel in Via Alagona, Eastern Ortigia, close to the sea walls.  Back in 1492 when Ferdinand the Catholic from Spain became ruler of Sicily, half the population of Ortigia was Jewish. Ferdinand issued the decree that Jews were to convert or die and many decided to leave. Before fleeing however they filled the baths, used for purification ceremonies, not normal bathing, with a mix of fine sand and rubble smuggled into the cellar, to avoid detection. In a final bid to keep the baths secret, they sealed the entrance, hoping to one day to return.

It was only when the building was being restored nearly 500 years later that the baths were found. Two years after their discovery the natural purifying springs which lie 2 metres beneath sea level were finally cleared of fill. Our guide at the baths (5 euro entry) agreed that there is a strong likelihood of more undiscovered baths beneath the city.

Via Alagona 52 (at the entrance to the “Residenza della Giudecca”) Tickets 5 Euro. Steep ancient stone stairs are the only entrance. A little claustrophobic. Guide speaks first in Italian and then in English and answers questions.