The traffic in Vietnam scared the hell out of me, just as it would most Australians.  So when Marty suggested renting a bicycle and ticking off some Nha Trang Things To Do, my first reaction was – “You Must Be Joking”.

When I realized he was perfectly serious, I decided to accept the challenge. After all I do like to expand my horizons when I travel. 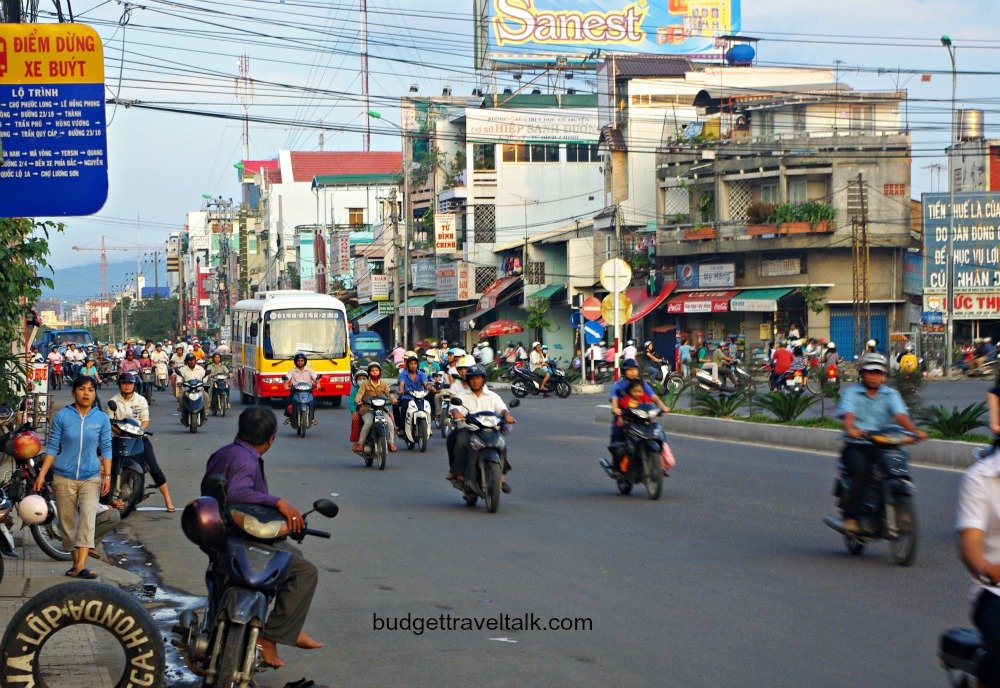 $3 bike hire each was arranged through our Hotel the Ha Van and within minutes we were making our way down Trang Quang Khai toward the ocean and Tran Phu Street which hugs the beach all the way from our starting point at the Sailing Club in the south to our  most northerly destination on Hon Chong Promontory. 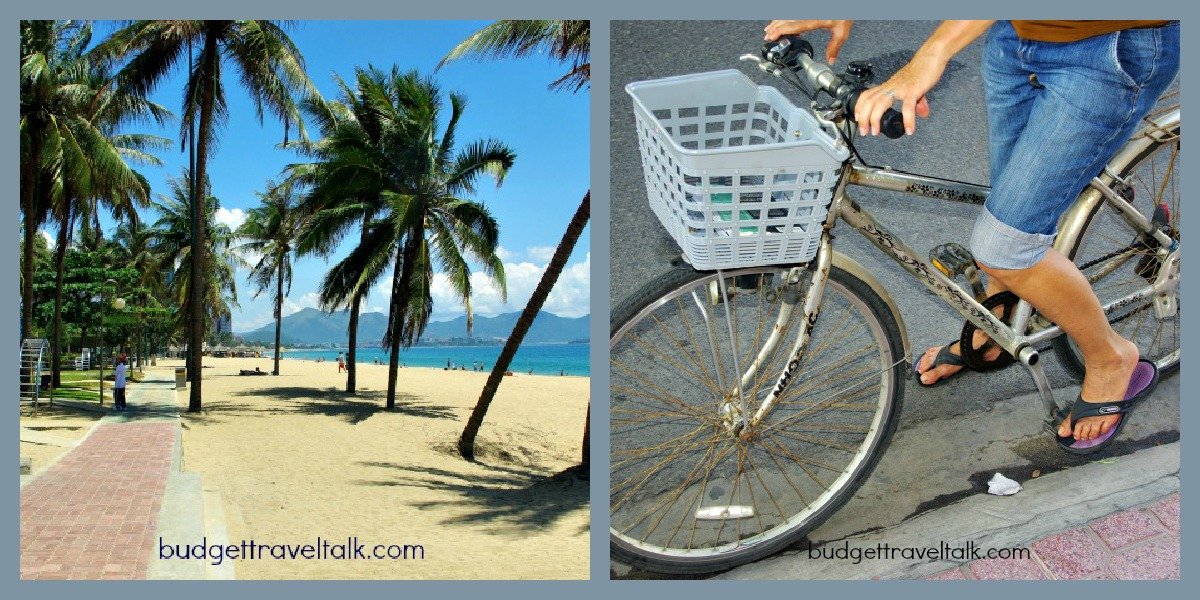 There was a walking path through the park that fitted snugly between the road and the beach, but B.H. maintained that as there were so many bicycles on the road we were probably not meant to use the path.

As with most things that I perceive to be scary, it actually wasn’t that bad.  I find the trick is to believe I can do it and relax, but not so much that I become completely blase.  Luckily we were on the side of the beach and park.  Whenever we could find a place to pull off and have a look at the beach we did.  Before long I was even overtaking with bravado – well, truth be known, the truck was stationary so I had no choice. 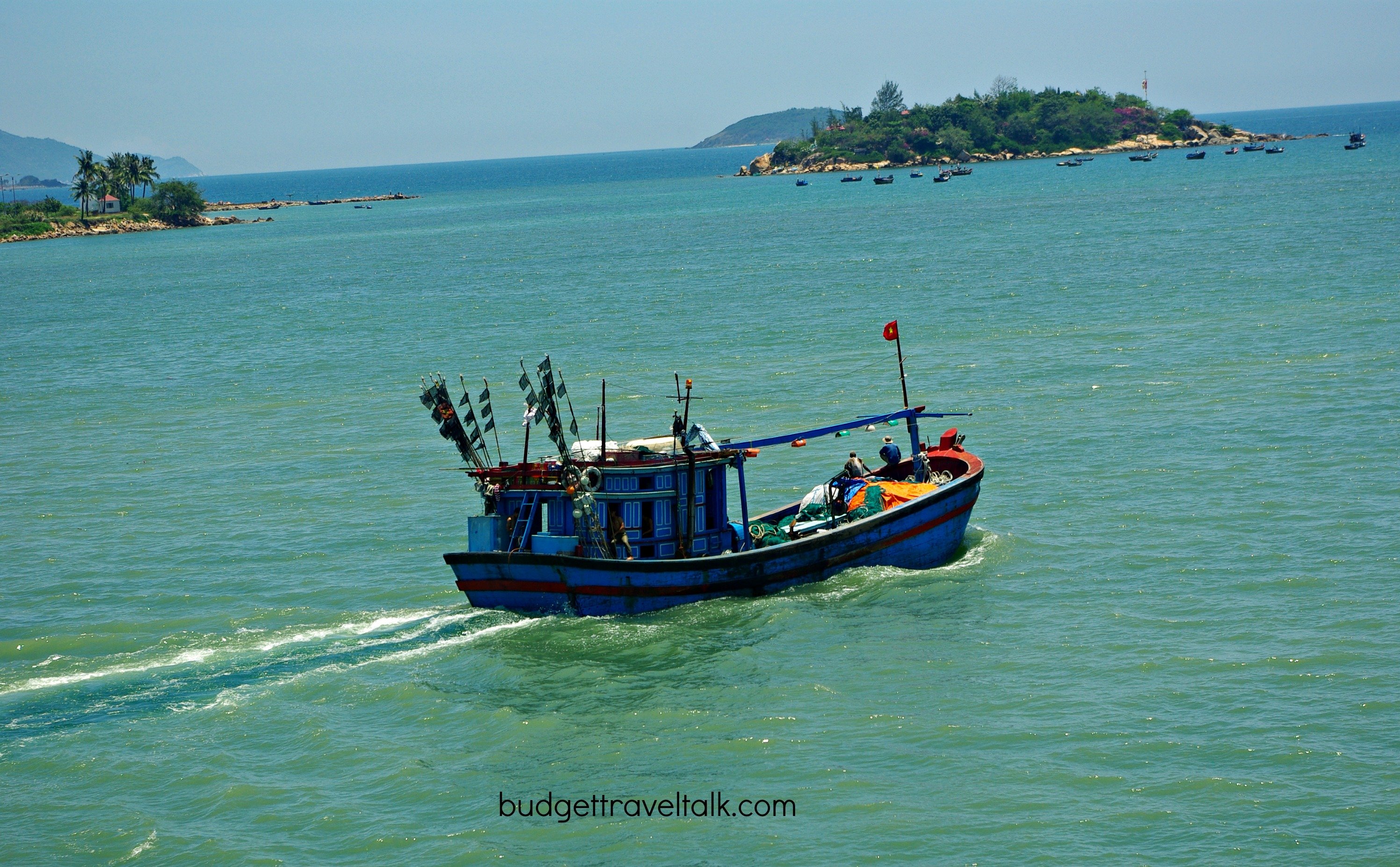 The Tran Phu bridge was a good place to take a breather and peer beneath at the blue fishing boats exiting the fishing port in the Cai River.

After riding up the hill at the promontory for a view over  Hon Do island, we parked our bikes and retired to a thatched roof bar, ordering our hard-earned drinks and quickly melting icecream.  With the ever-present Carpenters’ soundtrack playing, we sat overlooking the granite boulders, identical to those on Magnetic Island, back home in Queensland.  The difference being that these boulders were players in the local legend involving a giant male faerie and a lovesick female faerie. 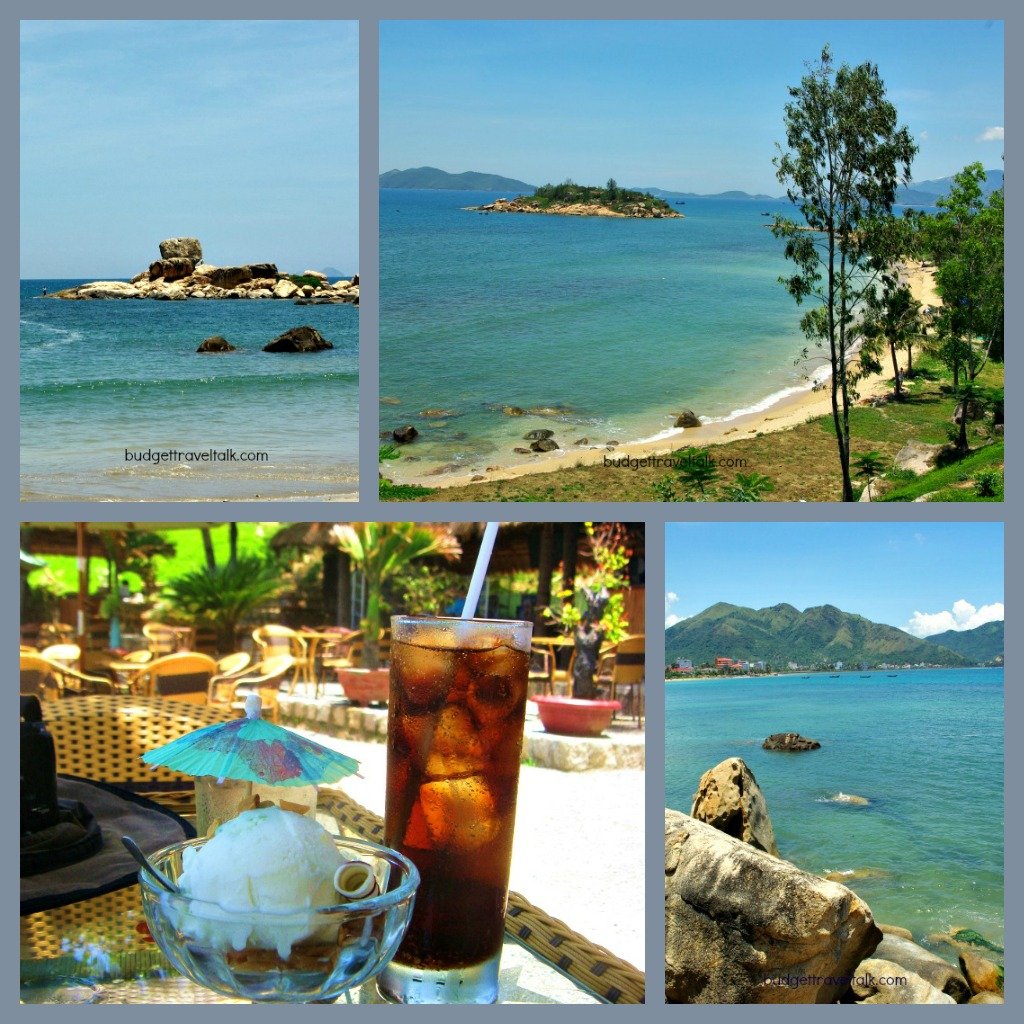 This was where we left the ocean and turned left, heading in the general direction of Po Nagar Champa Towers.  Luckily we avoided punctures on the rough un-made, but peaceful, back streets until we burst onto 2 Thang 4 road where we turned left again into full on traffic.

Po Nagar was an unexpected and impressive cluster of four towers with massive pillars below.  Today they reside on a hill about a kilometre from the mouth of the river, but at the time they were built between the 7th and 12th centuries they were actually at the mouth of the river. Time and the river have grown the land mass further seaward. We surrendered our bikes to the attendants at the parking area to the right of the complex and were given tickets with which to reclaim them later. 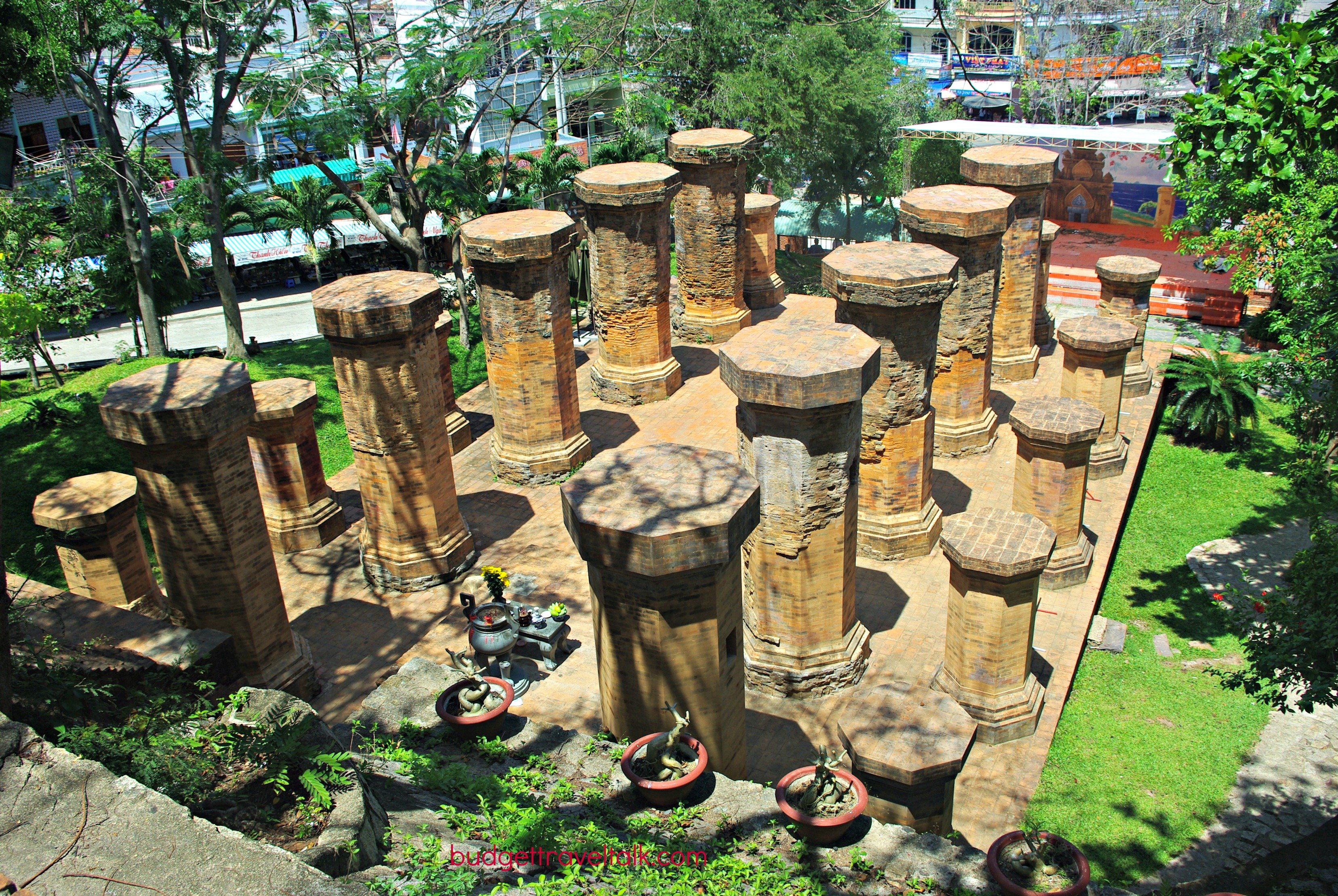 Entering the towers, holding shrines dedicated to Hindu deities was an Alice in Wonderland experience. On entering the tower, we plunged from bright sunshine, through a short tunnel into a tiny space, enclosed by centuries old smoke blackened walls.  There was not much time to linger as the lack of space and an influx of people, urged us to keep moving. 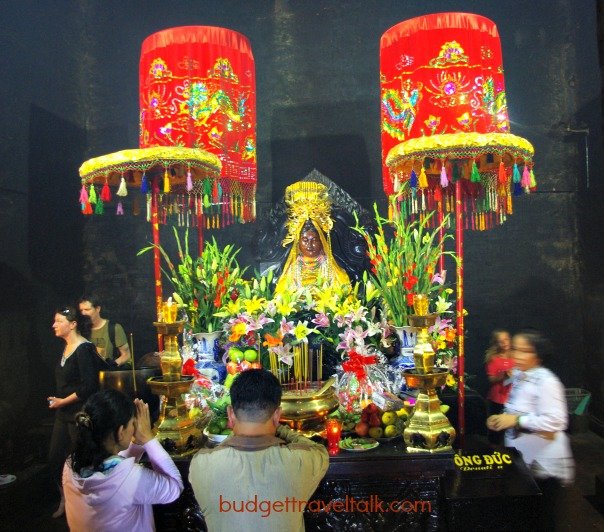 It was a visual bombardment of bare foot worshippers, bejewelled and tasselled umbrellas, flowers, polished brass and carved shrines. Looking up to the high vaulted roof, caught in a swirl of incense, I felt connected  and wanted to linger.  So much so that rejoining the world outside the tower, felt like a slap to the face. 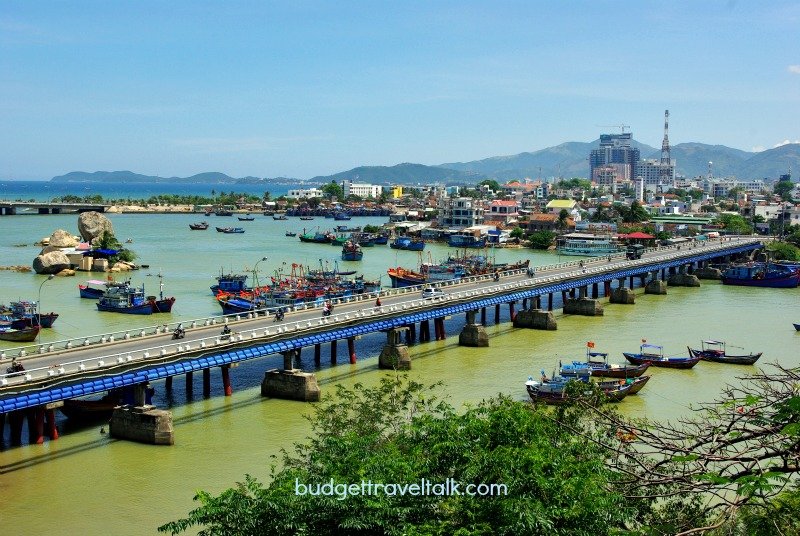 The view from the gardens was of the same colourful bustling port, that we had viewed from Tran Phu bridge a few hours before.  Reclaiming our bicycles it was time to tackle another bridge the Xom Bong that joins the north shore to Xom Bong island, and the Ha Ra, that joined the island to the southern shore.  These bridges did not have the comfort of a walk way to retreat to if needed, and I felt my bravado weakening.  But there was no way to back out – we were riding bicycles and the alternative of walking them, was too horrendous to contemplate, so on we rode.  I confess it was only me who had these thoughts and B.H. was loving every minute of it.

We hoped to visit the gallery of world renowned Vietnamese photographer Long Thanh.  After finding the street easily, 126 Hoang Van Thu was eluding us.  We were expecting a prominent gallery, but it must have been obvious to the old man sitting on the footpath what we were looking for, and he led us to it unasked.  The unobtrusive gallery was full of wonderful black and white photographs, that captured Vietnamese life with a stunning clarity.   Long Thanh only uses black and white film which he develops out back and he frowns upon digital. To our surprise Long Thanh was there and we shared a few words with this talented person, who was as unobtrusive as his gallery.  It does not surprise that he has chosen to exhibit his photographs in his home town of Nha Trang instead of the cities of Hanoi or Saigon.  He talked of his exhibitions in Australia and he left us to wander the gallery in admiration. In this motorbike and scooter crazed nation I should not have been surprised to see the shiny cream Vespa standing proudly in a central space in the gallery. But there it was and I have a feeling that any future romantic Italian Vespa dreams that I indulge in, shall have a distinct Asian aura about them.

It was about now in our travels that I realized I would have to be brave and leave my designated far edge of the roadway.  You see, the far edge seemed to be the domain of people riding on the wrong side of the road, against the traffic.  Not that I blame them, for I did not wish to cross the road unnecessarily either.  So it was that I got a little braver and ventured further out into the road and took my place in Nha Trang traffic big time. 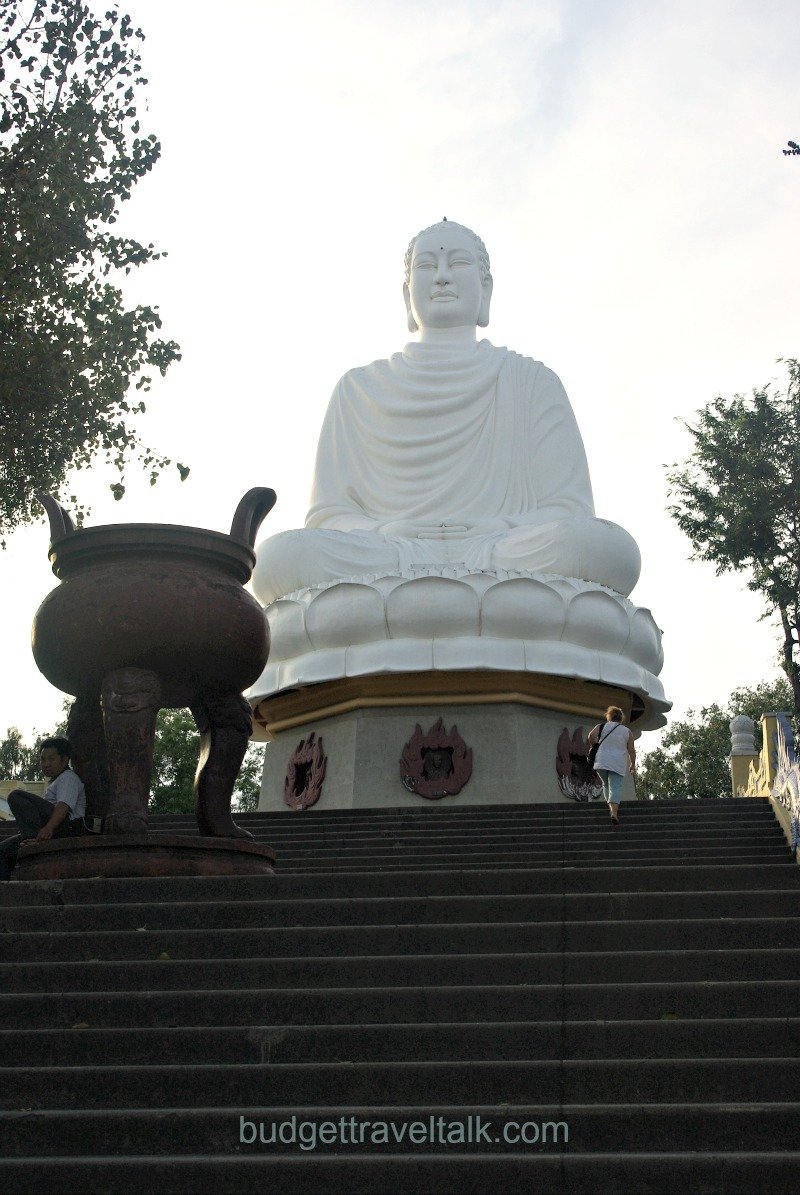 Getting back onto the road even seemed like fun and before long we had arrived at Long Son Pagoda and were climbing the 152 steps to visit the white Buddha sitting upon a lotus flower that can be seen from all over the city, the total height of base, flower and Buddha totals 24m.   Standing insignificantly at its base we looked up at this incredible sight and then out past familiar gum trees to the ever present ocean and islands.  The faded red corrugated tiled roofs below provide shelter for the ashes of departed monks, while the Buddha itself is a memorial to the six monks who self immolated in protest of  Ngo Dinh  Diem’s Catholic rule of South Vietnam and its persecution of Buddhism.  Reminders  of Vietnam’s tumultuous past are never far from the present. 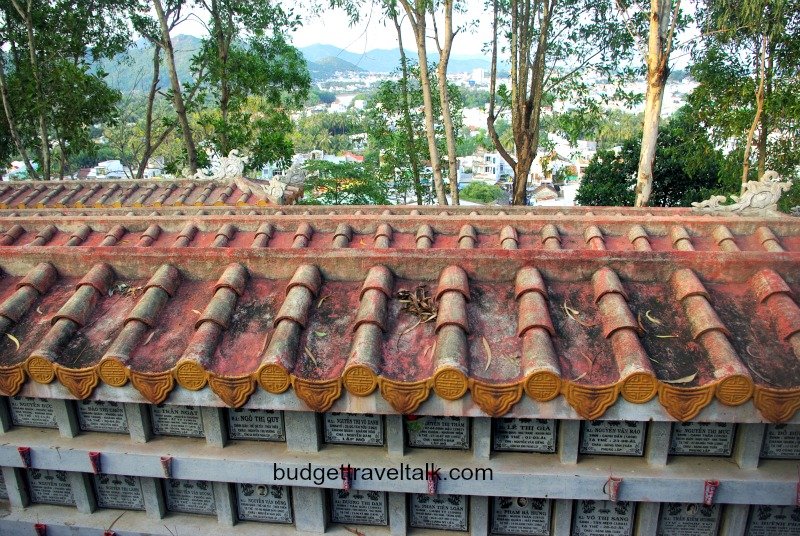 Back on street and pagoda level I spied an incredibly ancient looking monk on the monastery door step.  Harbouring thoughts of how someone so wrinkled could still be alive, I wish I had been brave enough to ask permission for a photograph, but instead I stepped into the light airy space of the pagoda, so different to the holy Po Nagar Towers. 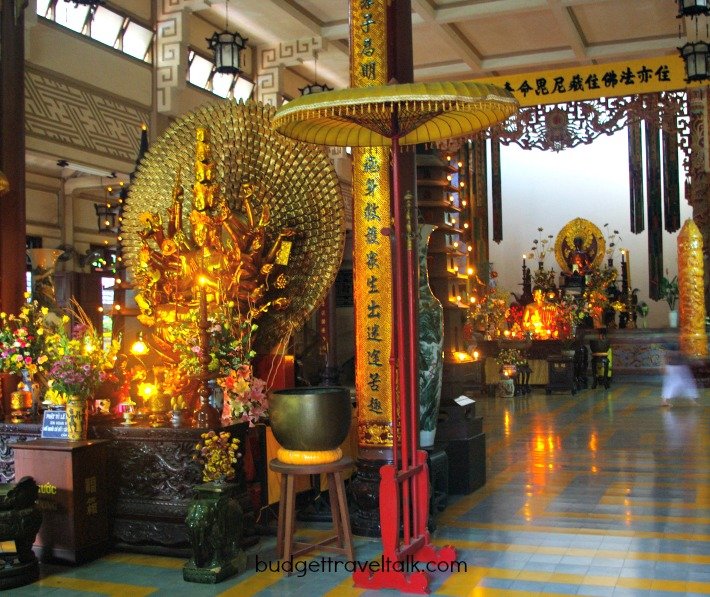 Leaving the Pagoda we rode down Yershin Street, past the General Hospital,  a buzz with people and food stalls out front, toward the ocean.  We both feel at ease near the ocean and enjoyed a lazy ride back to the Ha Van, and a refreshing shower.

Nha Trang is situated on beautiful beaches with a multitude of islands off shore.  In a move of solidarity, it defied the weather forecast and while the rest of the country was being rained upon, we managed three beautifully sunny days snorkeling and sightseeing before flying south to the oppressive heat of Saigon and the Mekong Delta.