Having visited three of the major historical sights of Rome, the Palatine Hill, The Roman Forum and the Colosseum the nearby Baths of Caracalla are a must see Roman destination. I’m not sure why this ancient thermal baths complex, built in 212AD isn’t more popular because it is a spectacular ruin set amidst beautiful landscaping.

However it’s being off the radar worked in our favour with plenty of room to move through the vast site. Al Callarello, one of the most affordable and local restaurants in Rome is also in the neighbourhood and is a delightful stop especially in late Spring.

Find Things for couples to do in Rome Tours here.

About of the Baths of Caracalla

Before feeling sorry for these above ground workers though, a thought should be spared for the slaves who stoked the fires in underground tunnels and ran on treadmills to pump the water.
[pinit] 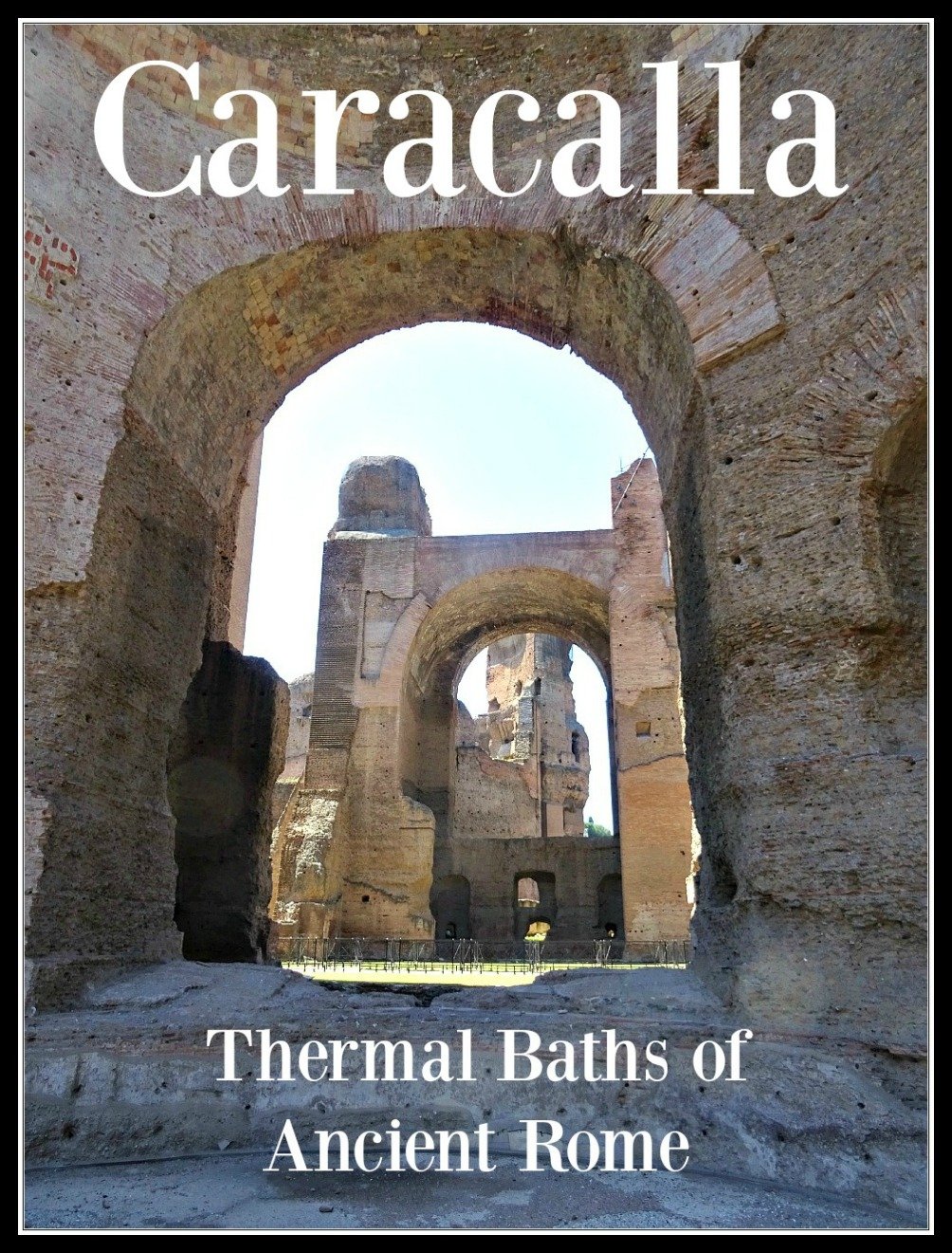 What Activities were available at the Caracalla Baths?

Those who were lucky enough to attend the baths of their own free will, had a veritable smorgasbord of activities to choose from. First there was the sauna, followed by rooms of differing temperatures and then outdoor swimming pools. Libraries, art galleries and gardens added culture to the mix.

The plans below give some idea of what the baths looked like back in their day. 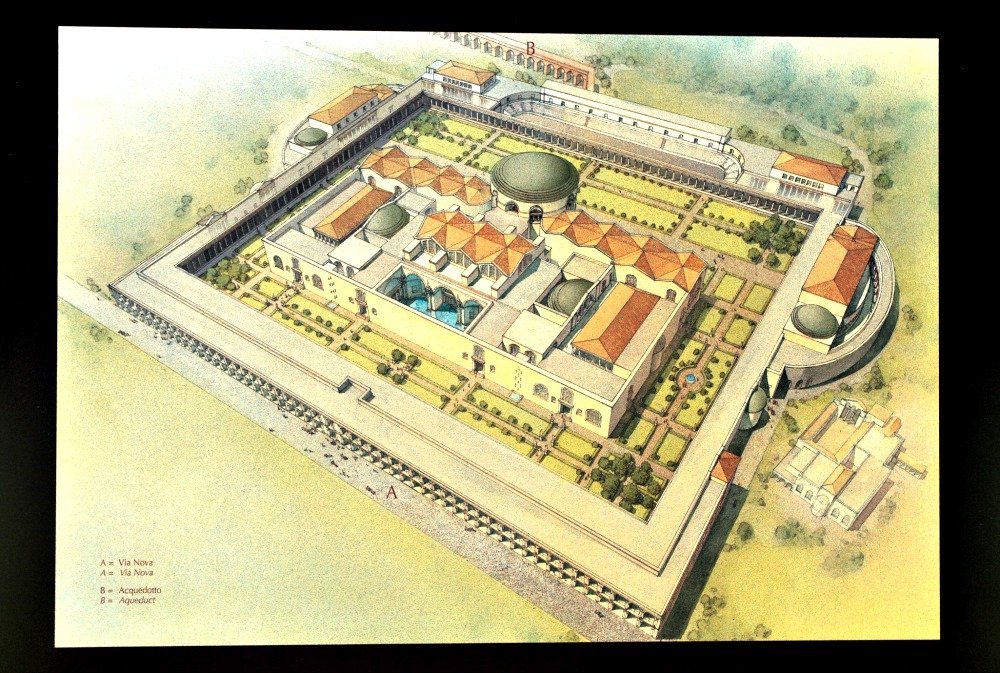 What the Baths of Caracalla Looked Like in their Hey Day. 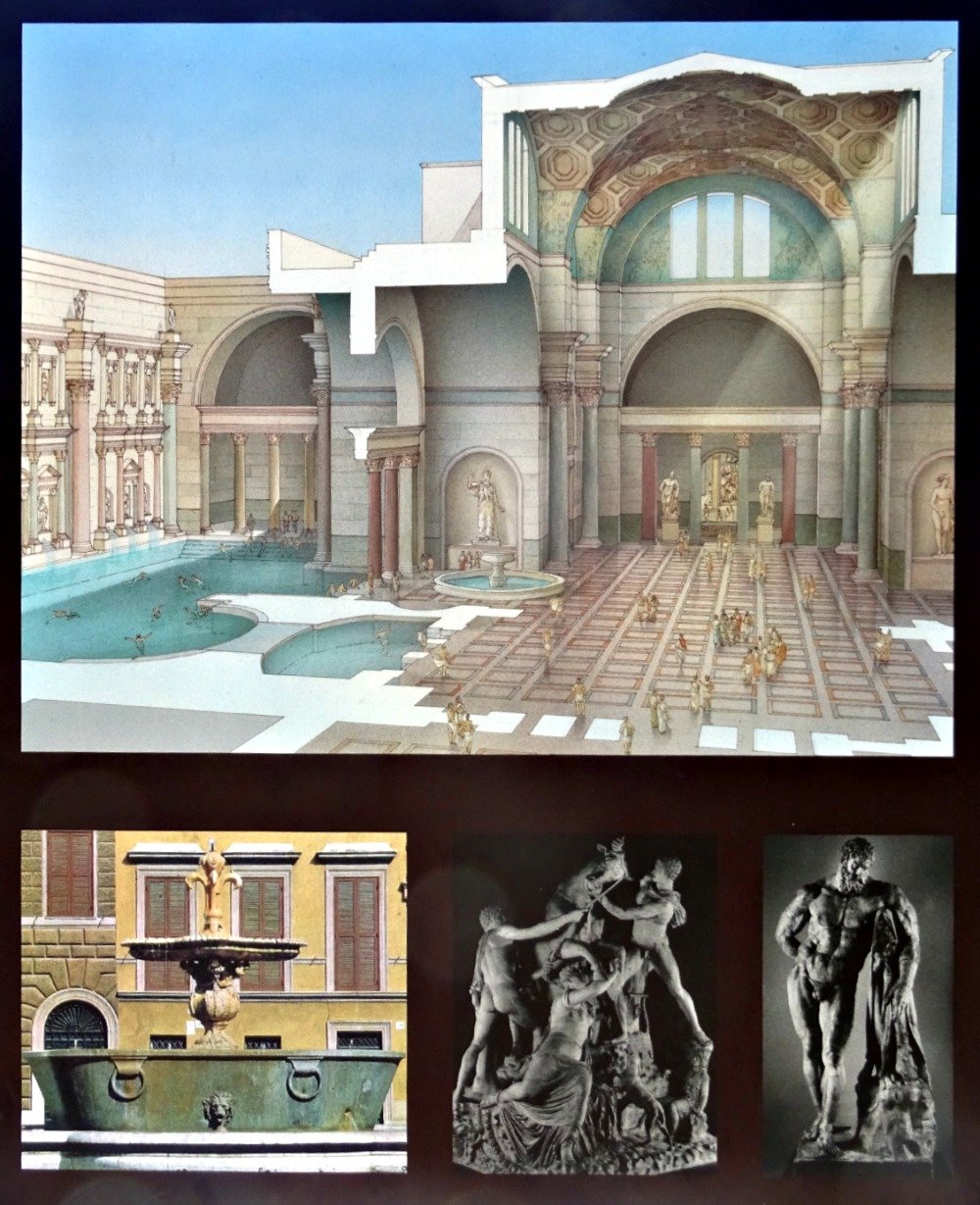 A board game on the edge of one of the pools where walnuts were thrown in the holes with a first past the line ending, like in mini-golf. 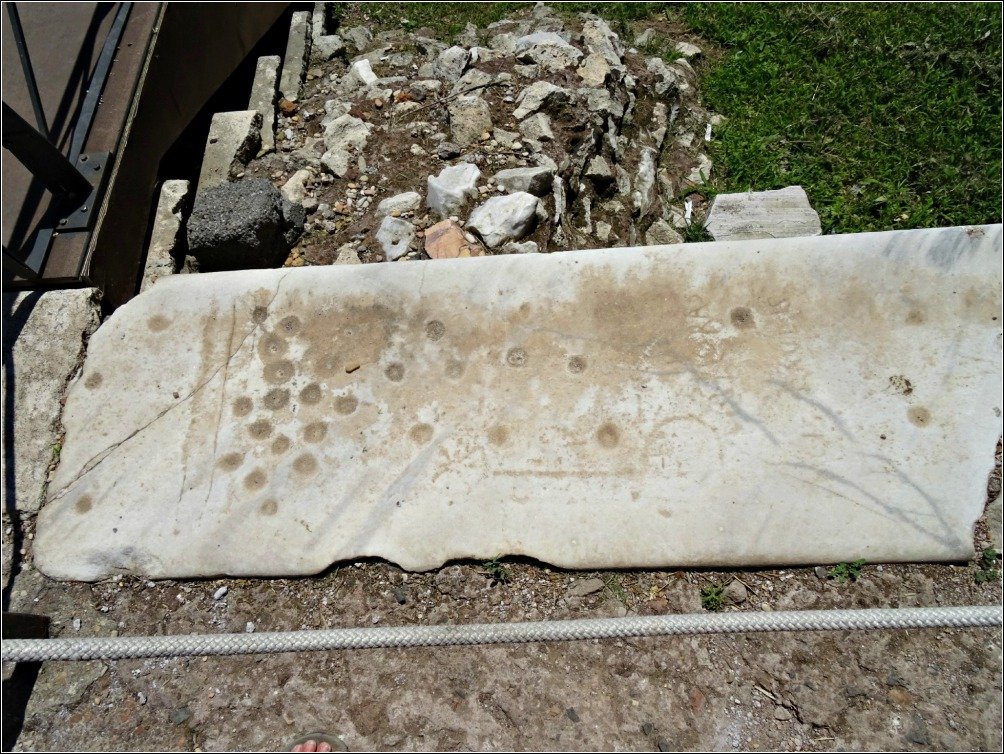 Founding Emperor Caracalla, had the public baths built in a political move to gain favour with his subjects – and it worked. He decorated the complex with high-end ornamental sculptures like Farnese Hercules (now housed in the Capodimonte museum in Naples).

Some mosaics are now located at the Vatican and of course more been looted over time. There is no on-site Museum. 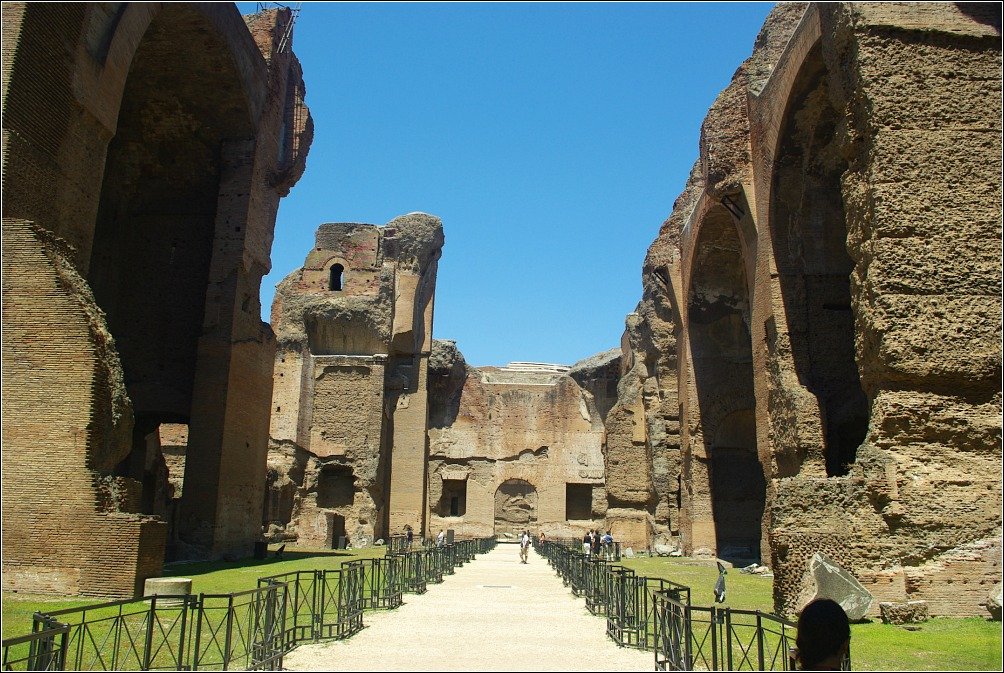 Back in the day, the bottoms of the Emperors’ subjects rested on marble seats, their eyes and feet feasting on mosaics – some of which are preserved in-situ today.

The mosaic remnants propped willy nilly around the walls at ground level today were once on the (now non-existent) floor above. 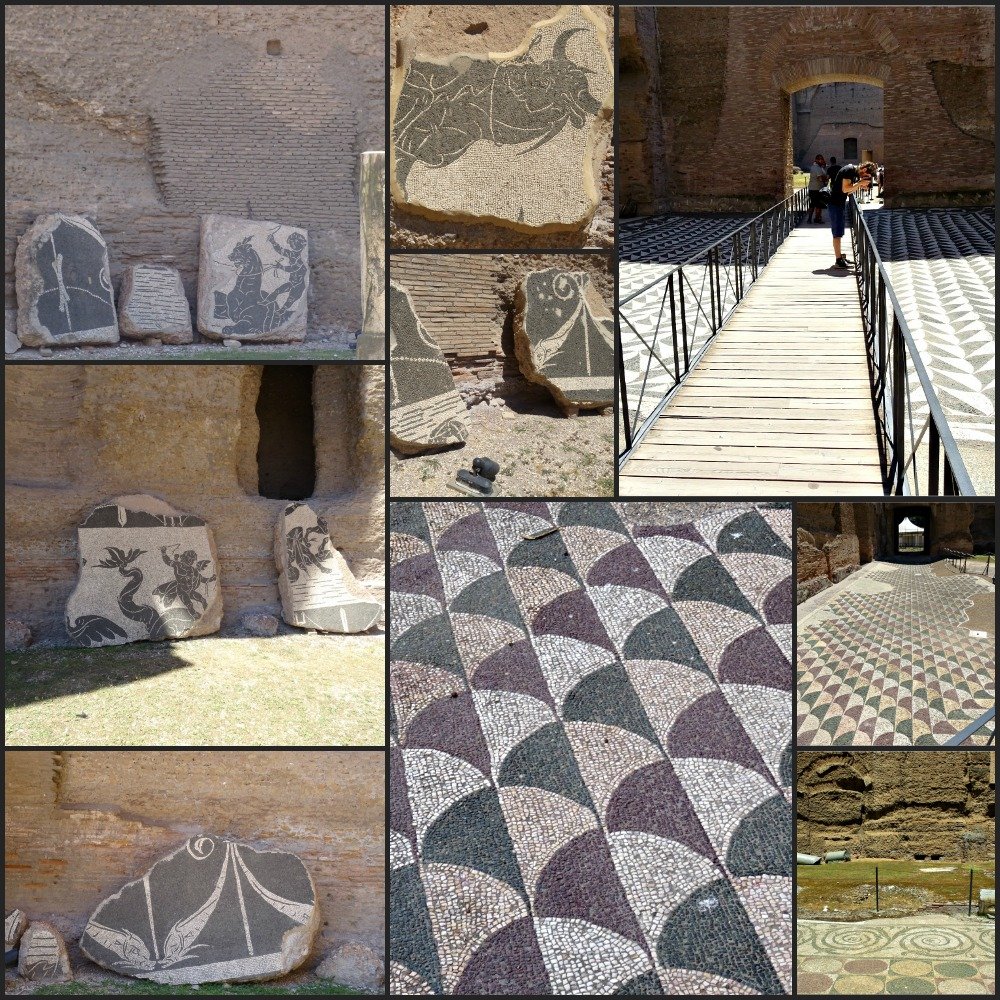 1600 patrons from a wide cross-section of the community enjoyed the baths at any one time, with a total of 6,000-8,000 entering daily. Houses back then had no bathrooms, so the Baths of Caracalla played an important role in keeping the population clean. No wonder the emperor was popular! 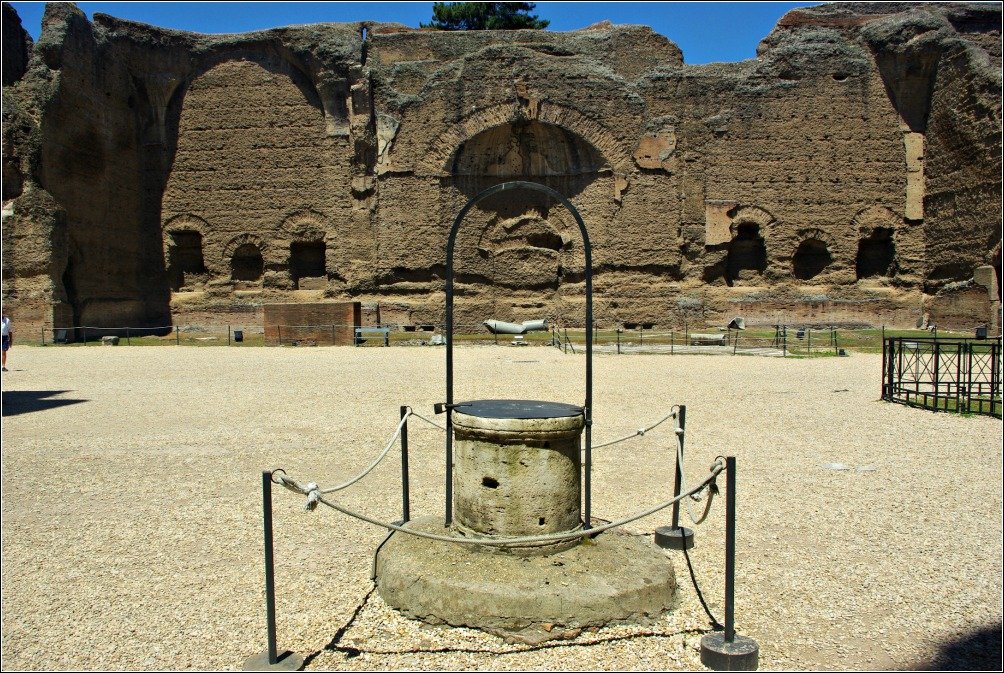 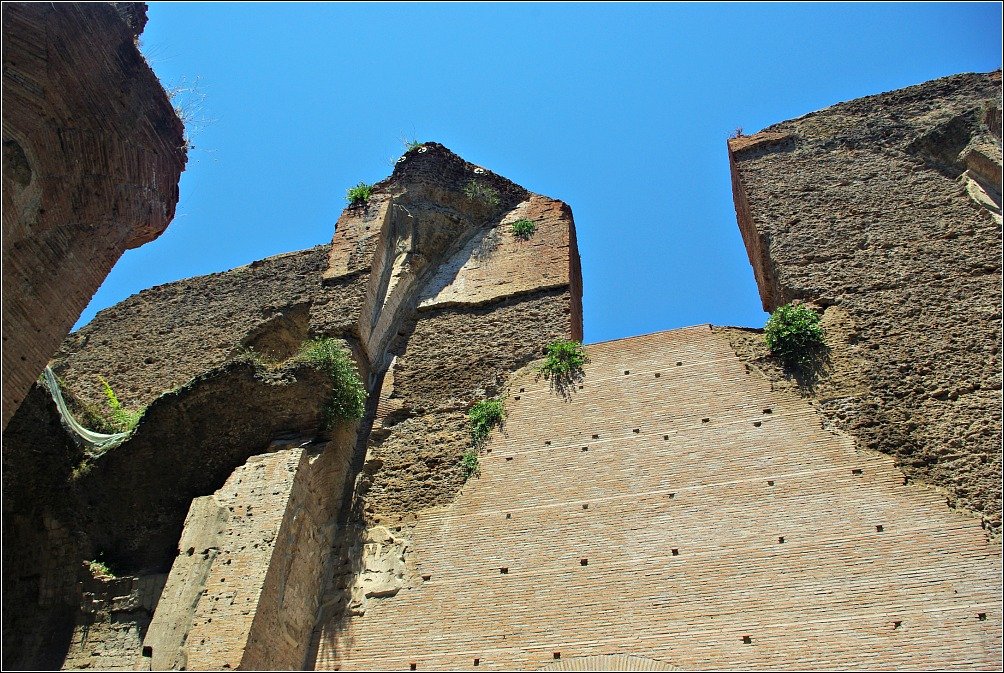 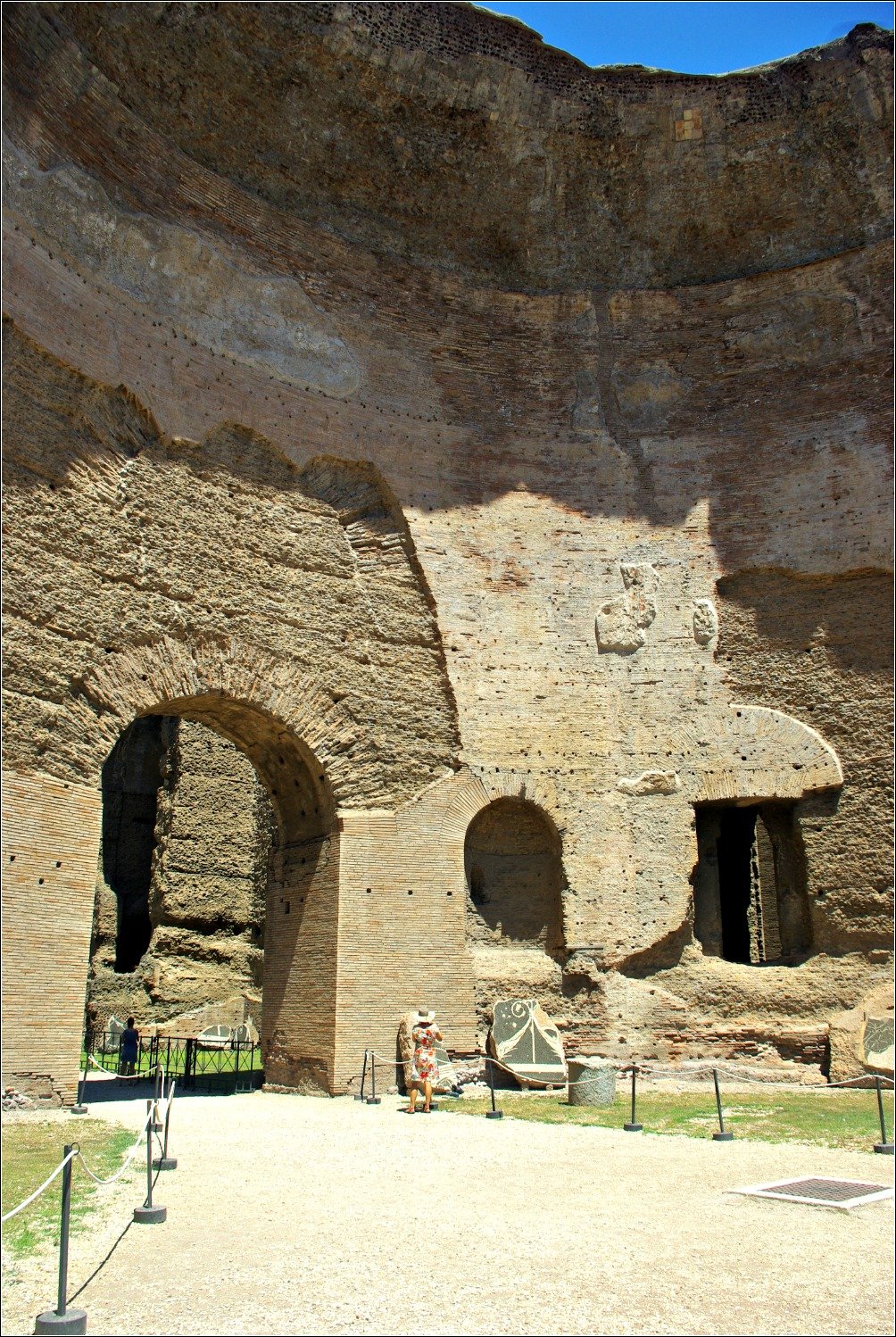 Although the baths have not worked since the 6th Century, we did raise a sweat in temperatures of 33 degrees Celsius in late June. The high walls radiated and channeled heat and it was hard to comprehend how hot it would have been feeding fires in the tunnels. 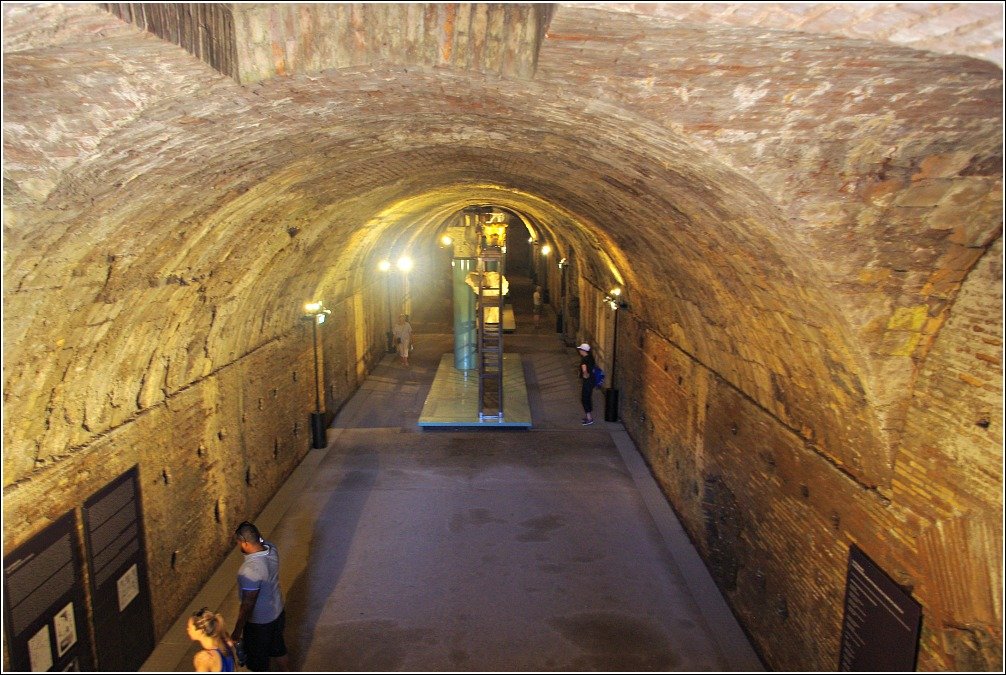 Only opened to the public in 2012, the tunnels are a surprising 4km long and at 6 metres across – wide enough for horses dragging carriages of wood to enter and turn around. Nowadays the tunnels (only a small portion of which are open to the public) display columns and artefacts and sans fires were noticeably cooler than above ground.

A portion of engraved Column on display in the tunnel. 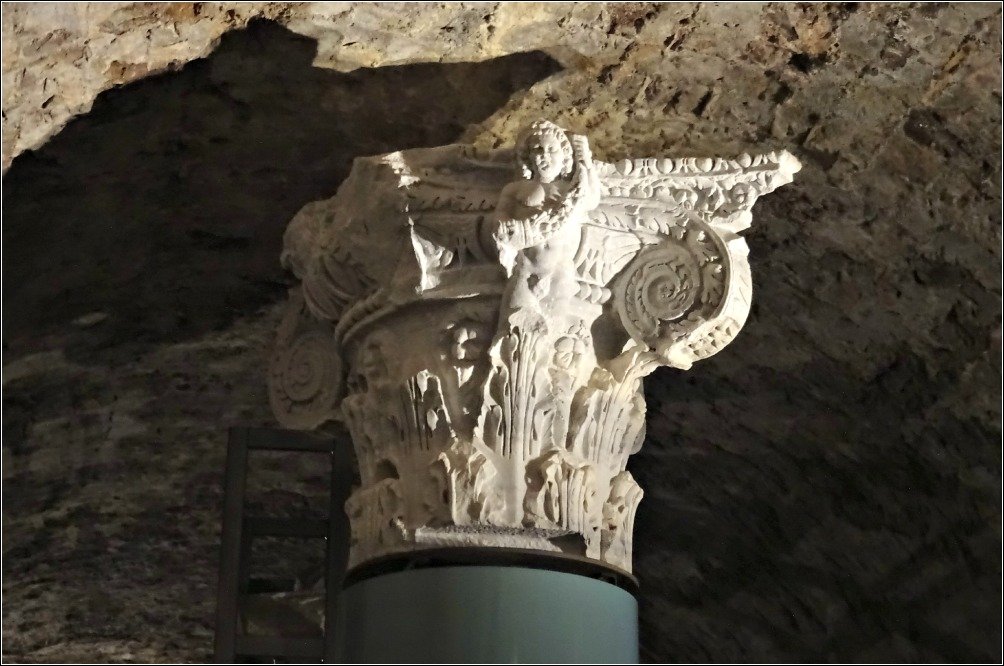 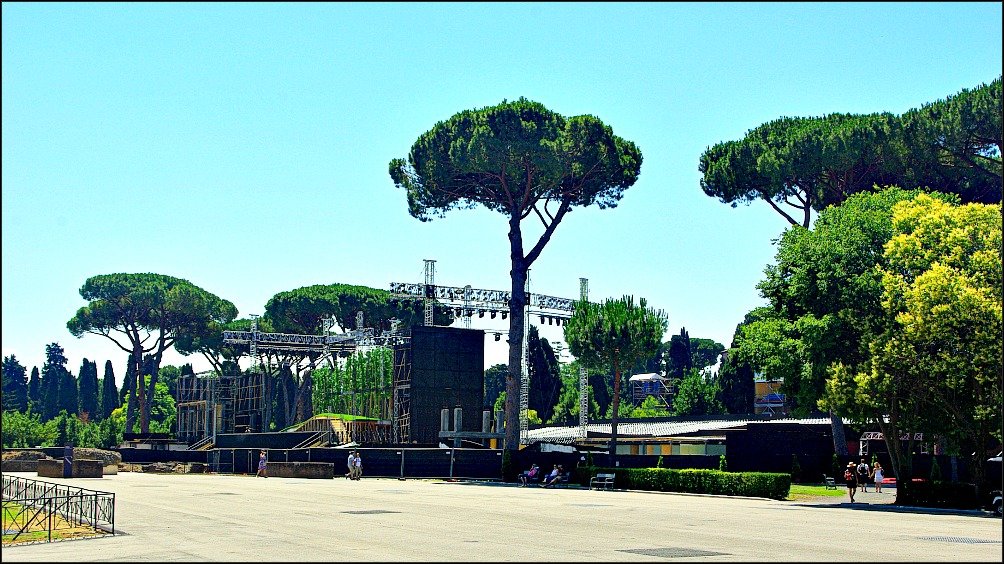 The Pink Floyd Ballet was performed in the grounds the night before our visit. You can sign up to be notified of Opera performances Here.

A caravan at the entrance to the Baths complex sold panini rolls and drinks, but this was our second last day in Rome and we wanted to relax over a restaurant lunch.  We walked all over looking for a restaurant before straying into Piazza Gian Lorenzo Bernini where a flower seller directed us to Al Callarello.

Being a hot day the restaurant had marquees set up street-side. 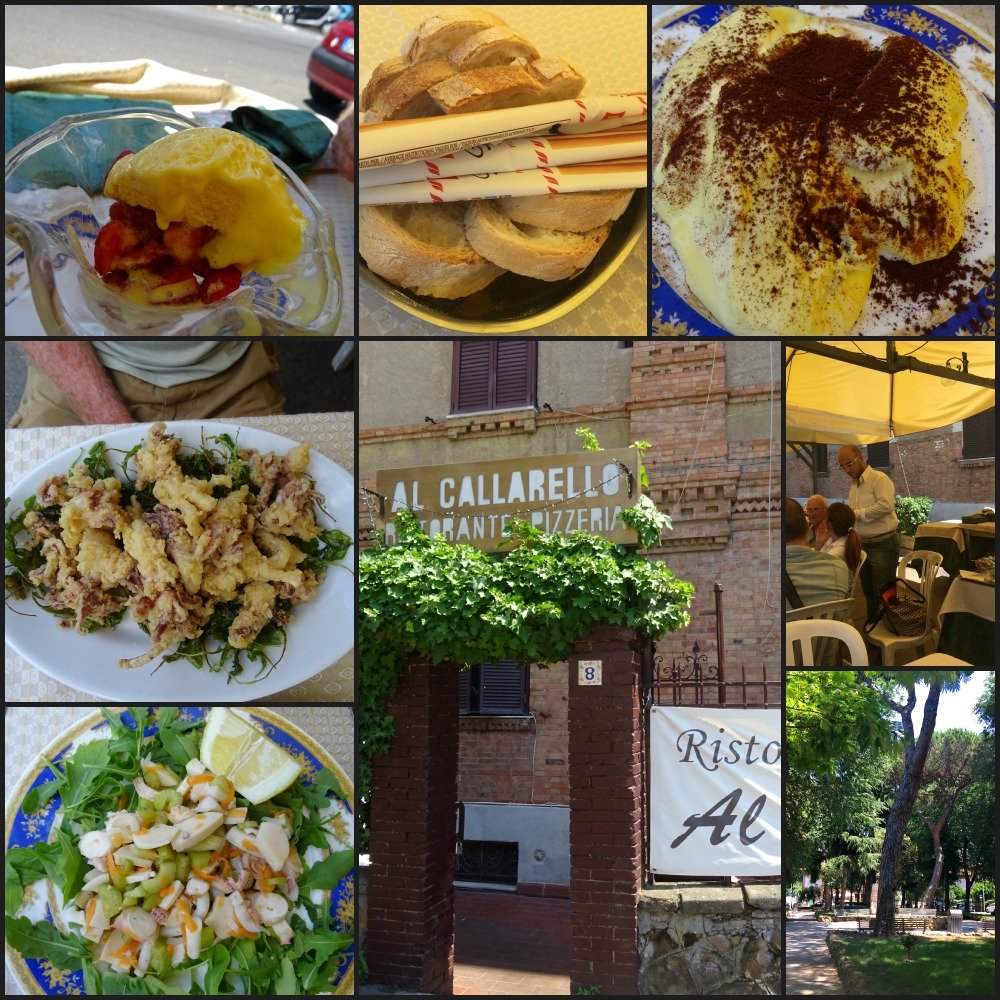 The waiter sat us at the sunny end, possibly segregating us, or maybe he thoughtfully assumed we would enjoy sitting in the sun – damn our language skills! In either case he didn’t object when we joined the other diners in the shade.

I must say it was lovely to be seated with local families enjoying Sunday lunch together. Ever conscious of the budget, Marty chose a fried calamari entree, which arrived on a bed of fried leafy greens. When it arrived he found it large enough for a lunchtime main but he had already ordered a side of fried potatoes. I stole liberal tasting of the whole baby squid and can vouch for it’s crunchy, moist perfection.

My order of octopus salad elicited noises of approval from our waiter. The Octopus was boiled or ceviched it was difficult to say which, then cut into bite sized pieces, tossed with celery and carrot and served on a bed of fresh rocket. It wasn’t how I envisaged, but I could not have ordered better for this hot Roman day – tasty, tender and refreshing.

We’d not previously seen Tiramisu presented the way Al Callarello did with the components of the dish arranged free-form on a flat plate and the cream custard dolloped on top. Marty demolished it but decided the one at Pizzeria Al Marmi on Viale Trastevere was a little better.

Having spent the morning walking in the hot sun, I found the thought of Strawberries and Vanilla Gelato irresistible. The quality of the strawberries shone through and with the gelato rapidly melting, I devoured it pronto.

The charge of 2 euro for a large bottle of cold sparkling water was welcome, after much higher prices seen elsewhere. It’s a lot to do with the area I guess.

35 Euro for two mains, two desserts, one side dish, a large sparkling water to share, and cover-charge seemed inexpensive.

We enjoyed lunching at Al Callarello.

This map shows how to get the Al Callarello from the Baths of Caracalla.

The houses in the vicinity of Piazza Gian Lorenzo Bernini (above) were decorated with exposed bricks (same as in Al Callarello above) and the area seemed like an interesting pocket suburb.  It is actually very close-by to Aventino the suburb we covered on the blog last week.

I am co-host of Nancie’s Travel Photo Thursday at Budget Travelers Sandbox, together with Ruth from Tanama Tales and Rachel from Rachel’s Ruminations.  If you have a blog you can add a link to one of your posts containing a travel photo below. Feel free to link back to this site in your blog also.

Budget Rome Off the Beaten Track in Aventino Testaccio and Ostiense
Next Post: Food to Love – Grilling Fish on Vis Island Croatia