At Budget Travel Talk we are all about free Townsville activities and a top free thing to do in Townsville is finding and enjoying Townsville Street Art.

You will hear a few well known names mentioned when talking Townsville street art, namely HAHA, ROA, Fintan Magee, Kennie Deaner, Lee Harnden or the Run Collective. This post talks about the artists and where to find their works.

Also look for some random eye-catching finds and up and coming artists.

Street Art Townsville first came on my radar after visiting the coffee shop known as Hoi Polloi, a hidden gem in Denham Lane.

Denham Lane is one of Townsville’s street art hotspots. 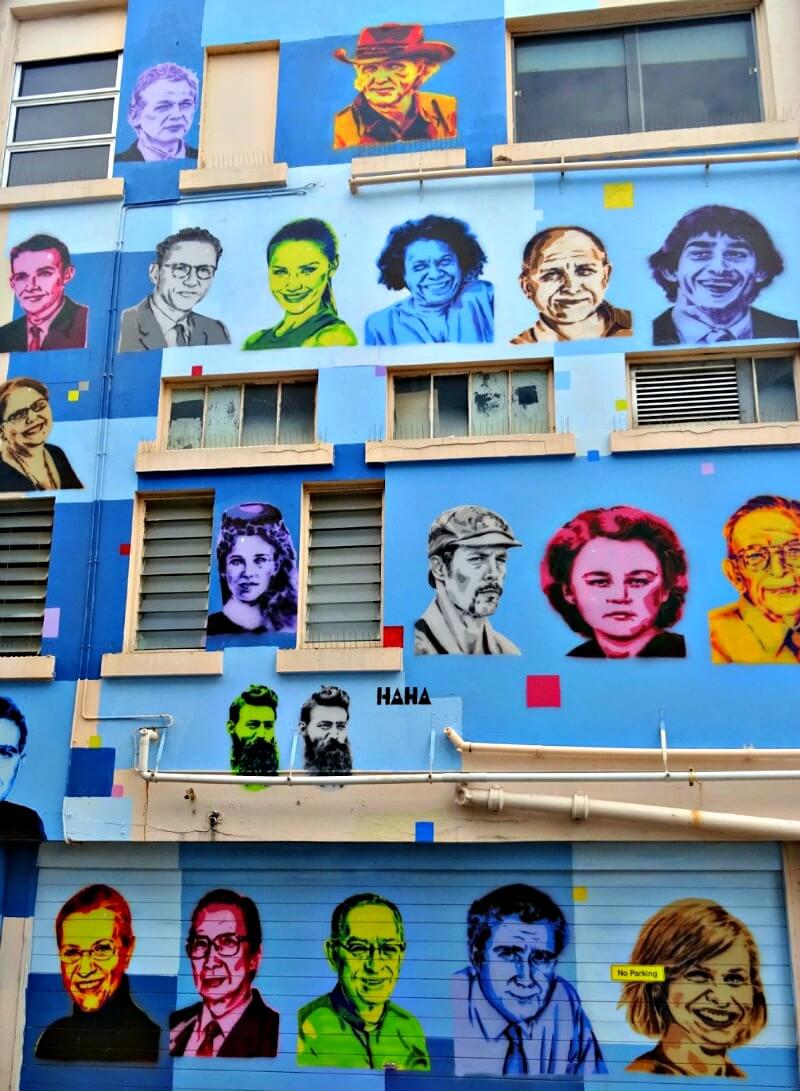 His 2015 stencil art in Denham Lane is a series of 23 stencil portraits approx. 1m square, showcasing some well known local people like golfer Greg Norman, swimmer Libby Trickett and Model Rachel Finch amongst others. I did notice Regan included his iconic Ned Kelly stencil in the mix.

He taught himself to cut stencils with both hands to improve productivity. At first right handed, he now draws and writes with both and it only took one week to achieve.

The Tower by Fintan Magee 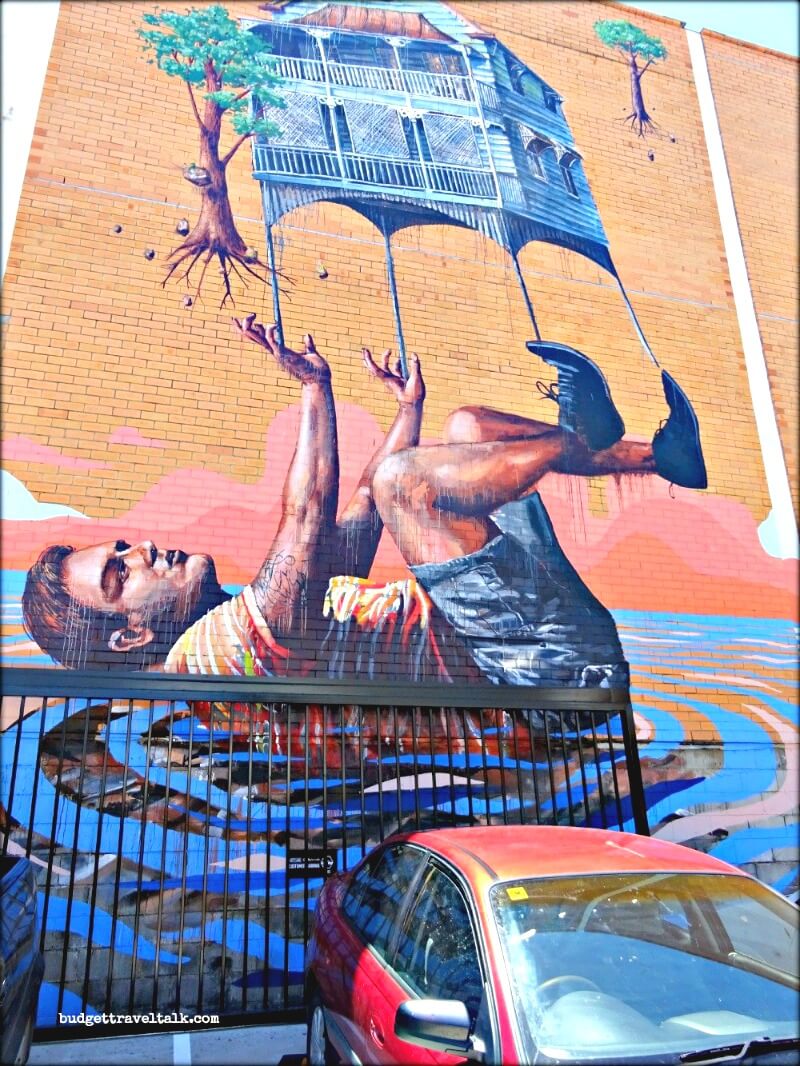 In 2014 international artist Fintan Magee hailing from West End Brisbane, was commissioned by Lancini Property in consultation with Perc Tucker Gallery, to paint “The Tower” in City Lane. Fintan originally worked graffiti style with spray paint but now uses house paint as his medium. Starting as a self taught graffiti artist he then attended art school. This work took 4.5 days to complete.

The inspiration for Magees surrealist painting in City Lane “The Tower” was experiences in the Queensland floods and the community spirit he saw. With the devastating flood Townsville experienced in 2019, this work has proven relevant.

It’s not often that anyone gets to paint a 10m tall street painting of their friend and mentor, but that is exactly what Lee Harnden did in City Lane Townsville. The subject Garth Jankovic, nick named “The Smizla” is another Townsville artist and teacher.

The Smizla by Lee Harnden 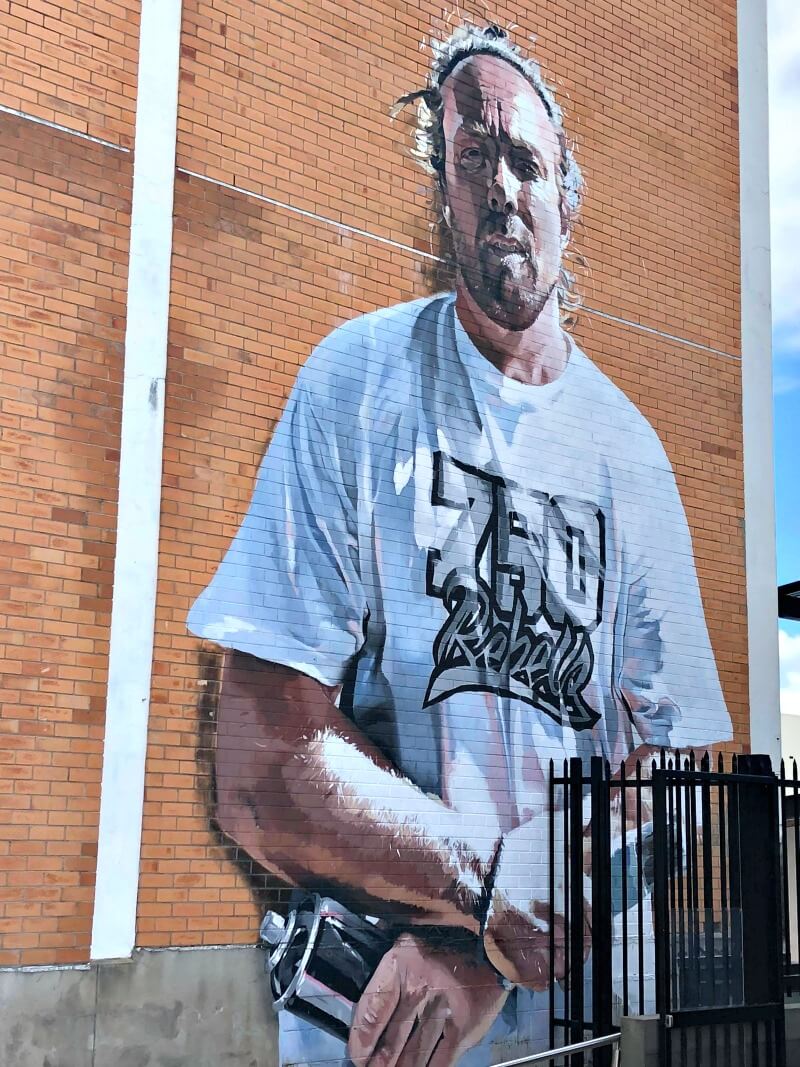 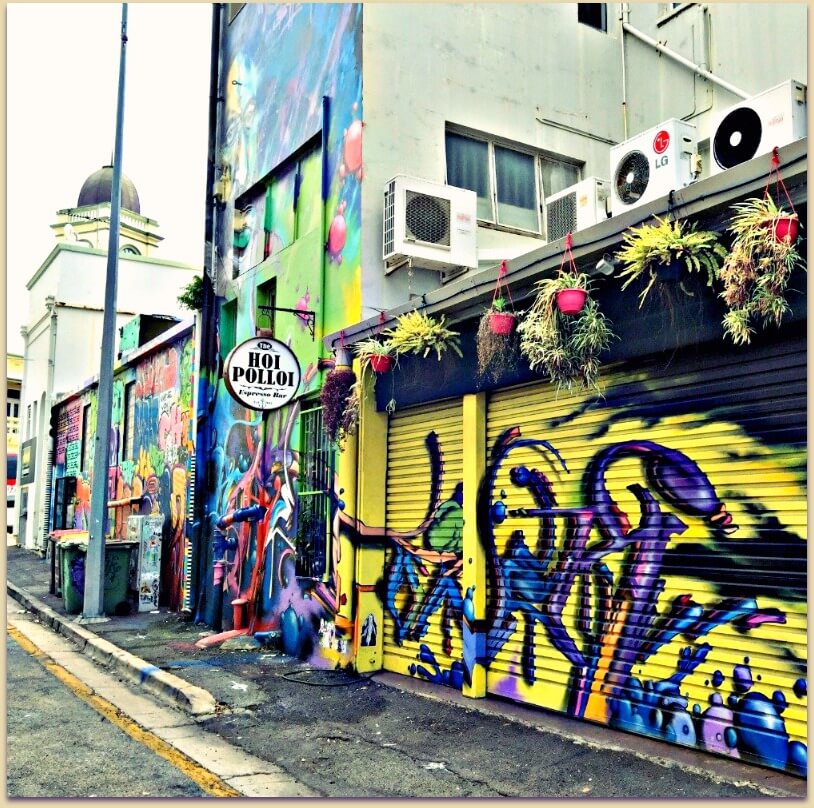 Kennie first became interested in aerosol street art as a teenager in Brisbane. 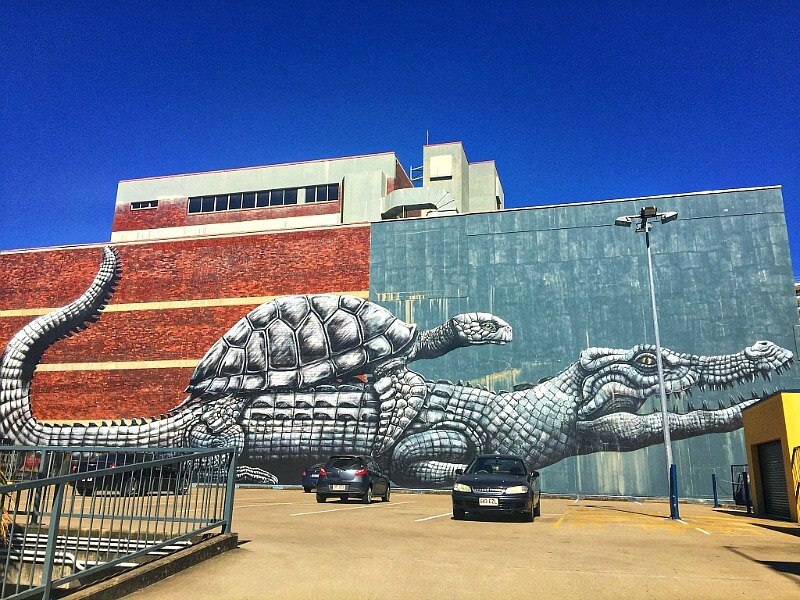 Born in the mid to late 70’s, ROA is a product of the 80’s. His street artistry career started with throw ups beneath bridges or on the walls of Ghent.

When his creativity took a dive he drew on his fascination with animals and came back with enthusiasm. Portrayed in black and white, his focus is native animals and how they share their environment with humans.

With a resurgent crocodile population and a under threat turtle population, ROA could not have chosen better for Townsville North Queensland in this mural.

ROA was inspired to create this Goanna, standing tall and holding his tail between his front legs when he was invited to an indigenous campfire gathering where a Goanna was cooked and eaten. 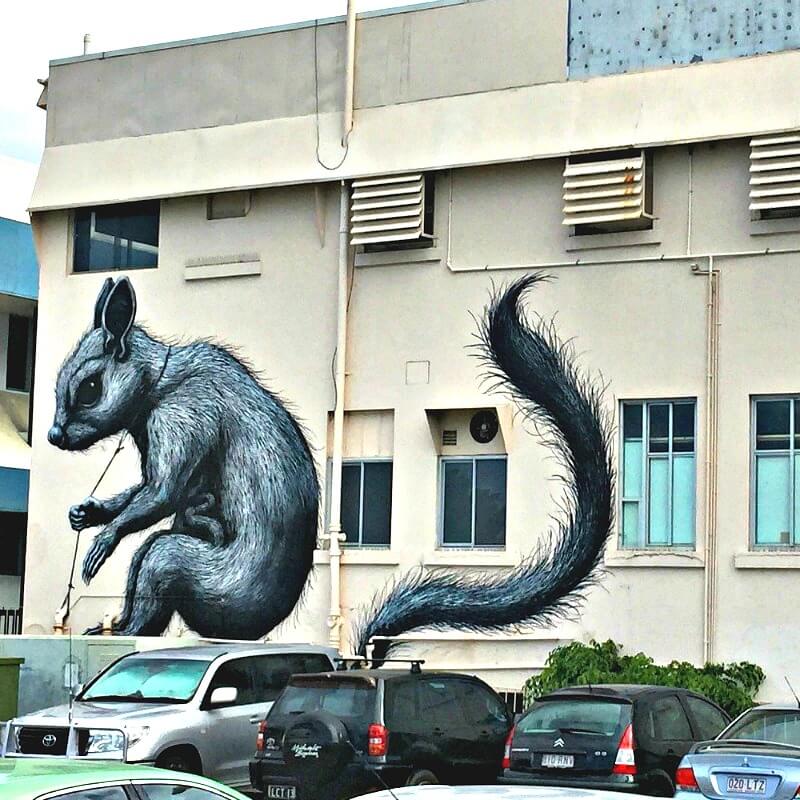 In Denham Lane Car Park near Hoi Polloi Coffee Shop, ROA painted a Sugar Glider in Black and White (his trademark colours). A sugar glider is a possum that glides or flies between trees in the North Queensland rainforest.

From a distance it looks very much like a rodent sitting on, and draping his tail across the car tops. Actually the glider is sitting atop some power boxes, chained to a water pipe.

ROA prides himself on choosing the right position for his works and in this case he also shows a quirky sense of humour.

The glider’s hair looks textured and it has some inner organs exposed – another of ROA’s style traits. He was attracted to painting a sugar glider because of it’s uniqueness as an omnivore that could fly. 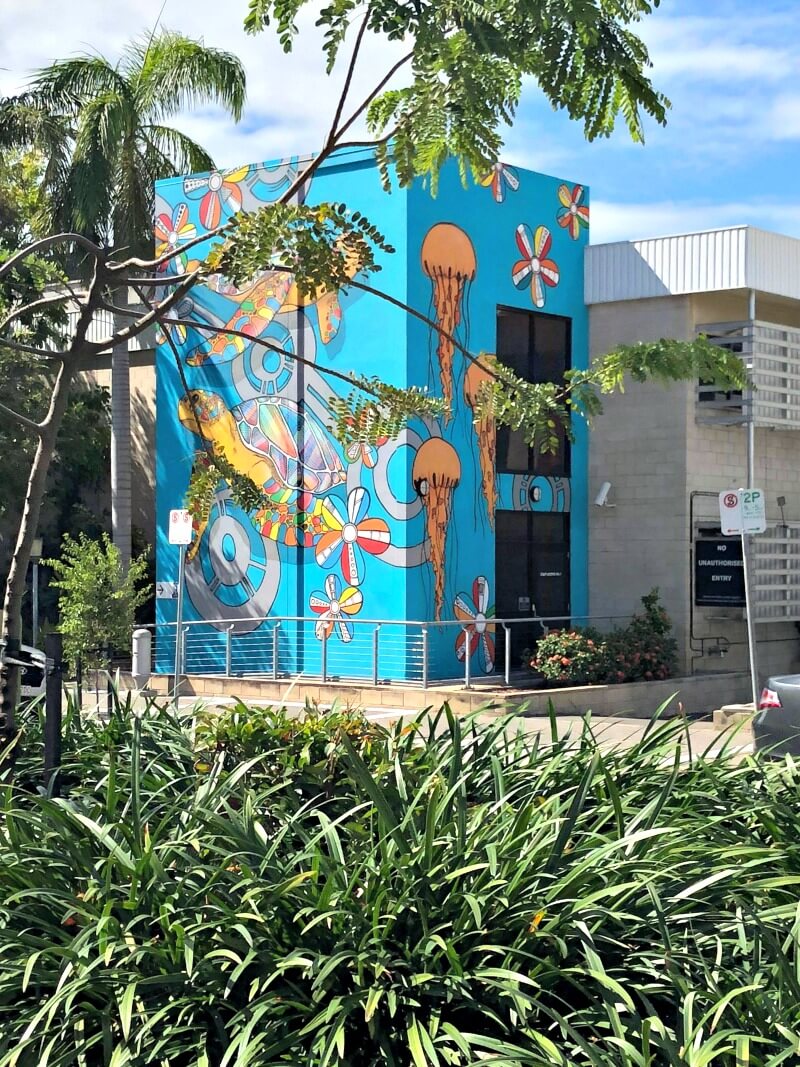 Professional Artist Hafleg is an indigenous street artist who comes from an Island Off Darwin. He drew on his knowledge of home that could translate and be meaningful to Townsville, hence his subjects of turtles and marine stingers.

He certainly achieved that with this eye-catching work.

Leans interpretation of Townsville’s ecosystem, portrayed on a mustard coloured wall in Ogden Street. The mural delves into the Great Barrier Reef, coral and fish, fruits, characterised by a hibiscus wearing woman above an underwater world. 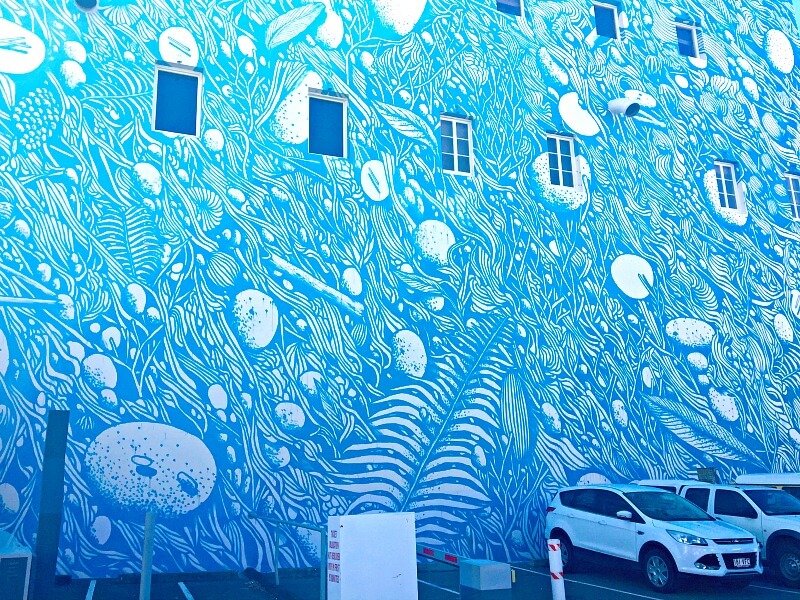 A big blue and white mural by Tellas called The Barrier, adorns the side wall of Federation Place (1889) Townsville. His tribute of natural elements in abstract form is of the Great Barrier Reef, which sadly is predicted to disappear if global warming continues unhindered.

Born and raised in the wild natural landscape of Sardinia, he trained in Bologna’s Academy of Fine Arts. On his return to Bologna after his Queensland trip in 2017, he launched a Solo Show inspired by his Queensland experiences.

Federation Place was used from 1941 as the Australian Defence Headquarters for WWII North-Eastern Division. Today the building is beautifully decorated inside, featuring a fabulous restored timber staircase over several stories.

The Barrier is across the car park from ROA’s Croc and Turtle.

Born in 1987, Contemporary free hand muralist Mantra, is an internationally renowned street artist, learning and developing in the French street graffiti scene since 2008. His nick-name evolved from his unique and repetitive art – like a Mantra. As a child, born in 1987, his interests were always flora and fauna and he still paints them almost exclusively.

A look at his collection of work, shows a predominance of female arm tattoos, butterflies, owls and birds. One of his murals of a woman amidst books is on the wall of a library.

Mantra’s Townsville Mural is quite muted in colour, a decision he made so as to not impose on the architecture. The mural narrative is of the reef and rainforest that surrounds Townsville.

Sound and Movement Personified is a mural done in collaboration with Dance North. She expresses sound and movement in colour depicting an actual contemporary dancer in action.

Flinders Street East – Boarded Up Building near “The Bank” Nightclub 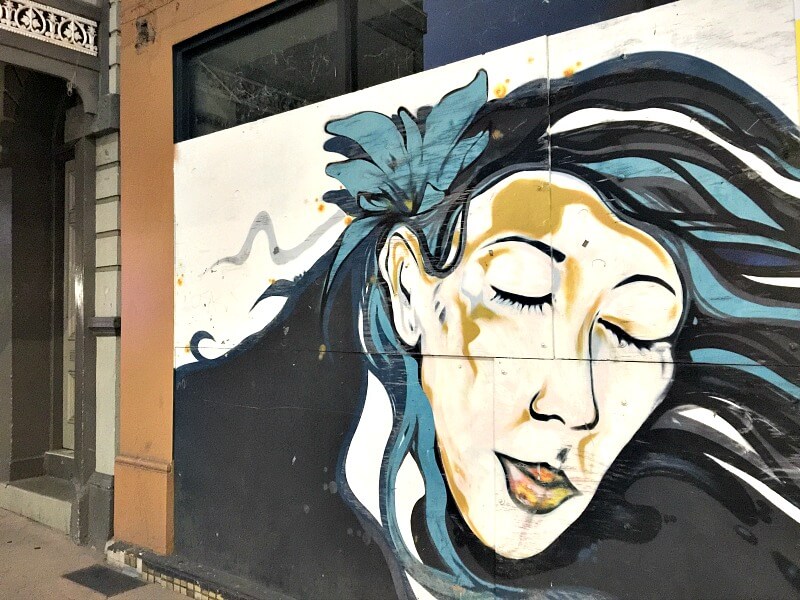 Situated in the laneway beside Kirwan Gym, in the Suburb of Kirwan. 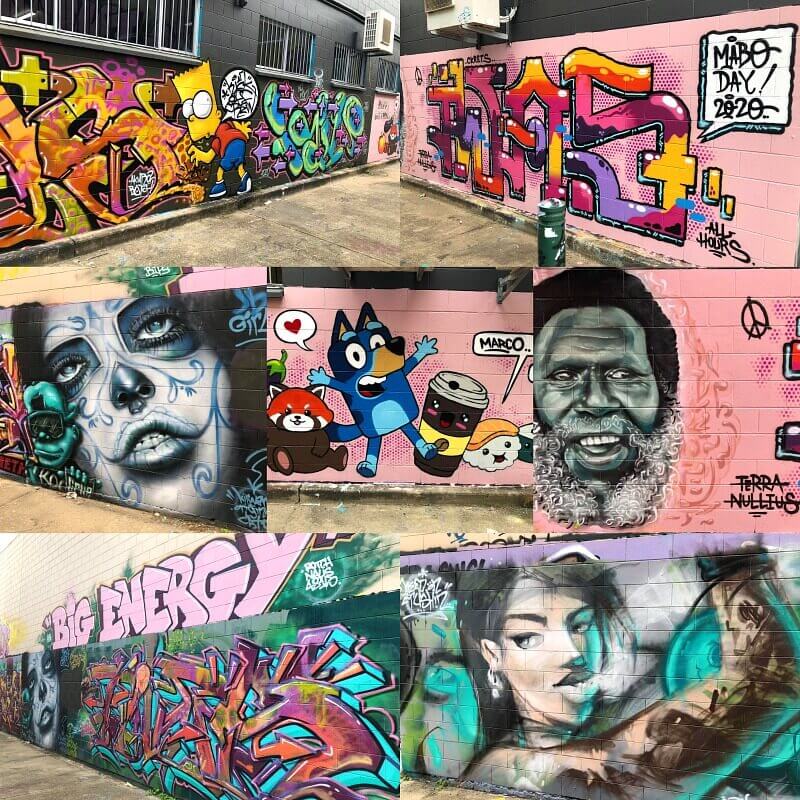 Have a look at the Laneway off Tavern Street Kirwan, beside Noddies Cakes & Cafe. I found some “Love” art here but it has now been painted over. 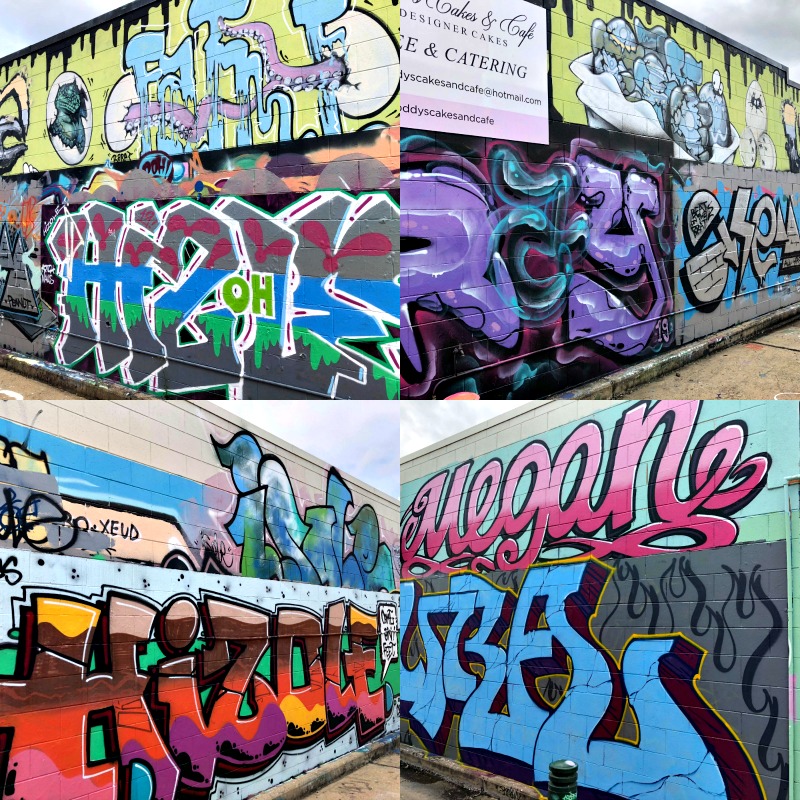 Pop around behind Noddies Cafe to find even more Kirwan Lane Street Art. 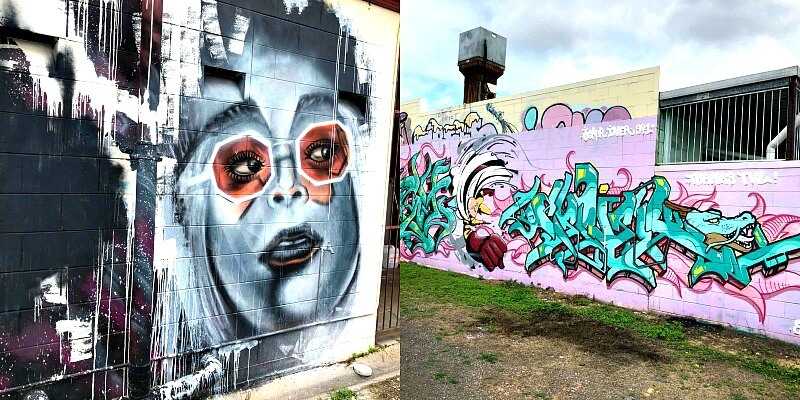 Click here to get your first time airbnb user discount!