Being closer to Africa than the Italian mainland, the Sicilian fishing port of Trapani is an interesting place to walk around and photograph. Although it seems to be off the beaten path, Trapani is actually well connected by bus and train to the capital of Palermo, by air (Ryan Air and others) to the rest of Europe as well as by a Thursday morning Ferry to Tunis in Africa. We arrived from Palermo by bus and left via Ryan Air to Trieste, the Italian town at the top of the Adriatic Sea.
[pinit] 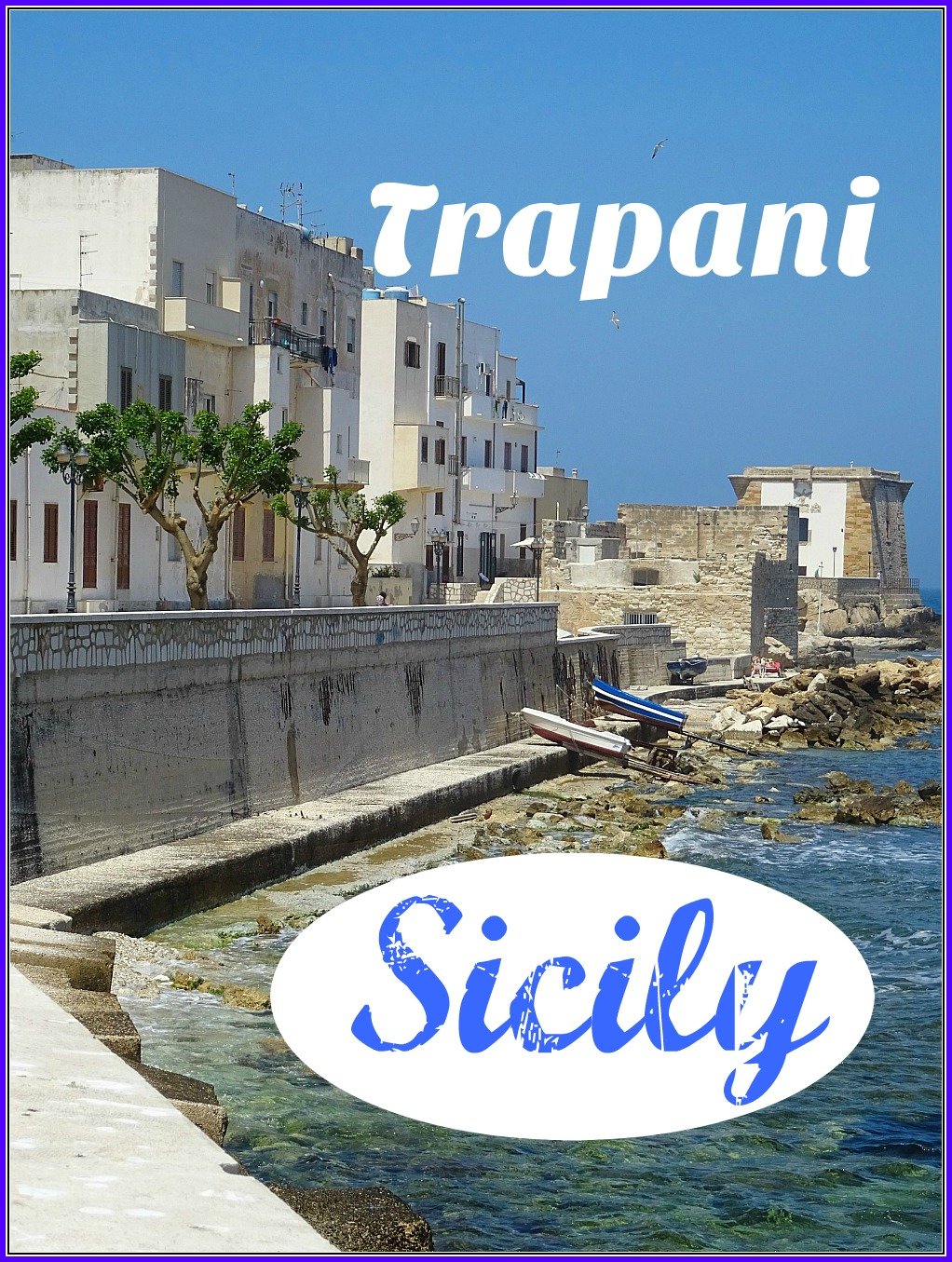 If you like eating fish, try a Trapanese Fish and Couscous specialty dish. 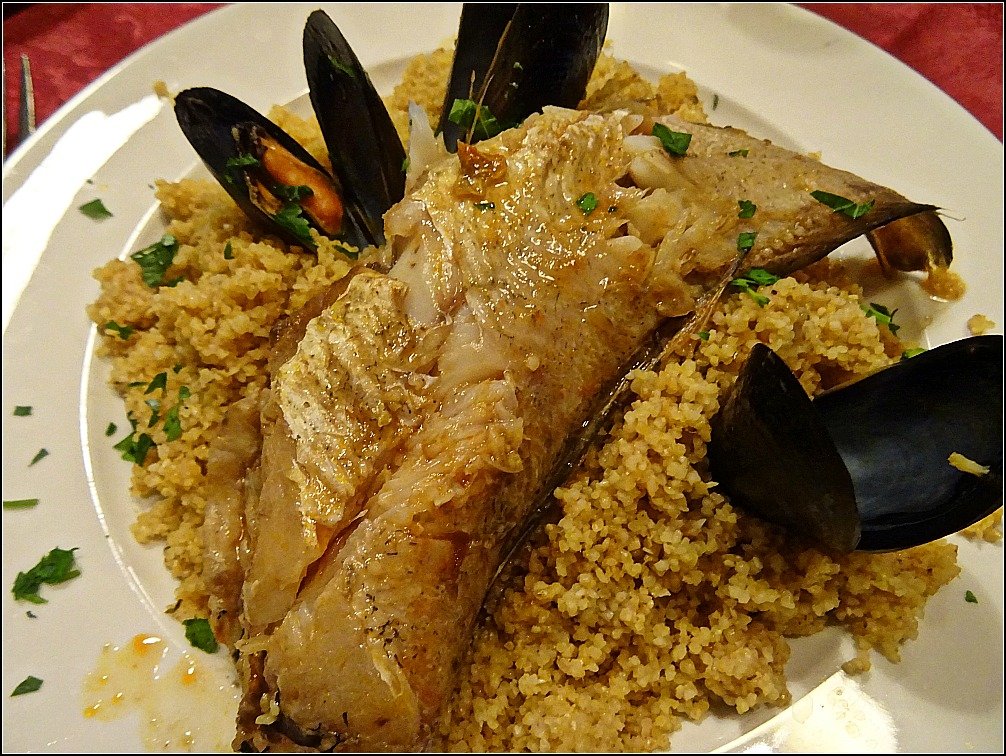 We asked our Airbnb owner’s recommendation for the best place to try this local speciality, but it seemed to lack flavour. This must be the only time an Airbnb recommendation has let us down. Next time I’ll try the soup version in a different place. The soup is prepared with an Italian base of fish, garlic and tomatoes, the couscous being added with an African splash of chilli, saffron, cinnamon and nutmeg.

I’ve read a travel memoir where the author sat at a randomly chosen port cafe, eating a bowl of fish and couscous. His Egadi Island ferry came and left without him while he asked for a refill – it was that good. If only he had mentioned the name of the that cafe.

On the same subject – one and a half hours away in San Vito Lo Capo they have an Annual 6 day September Couscous Festival. That might be the place to try! 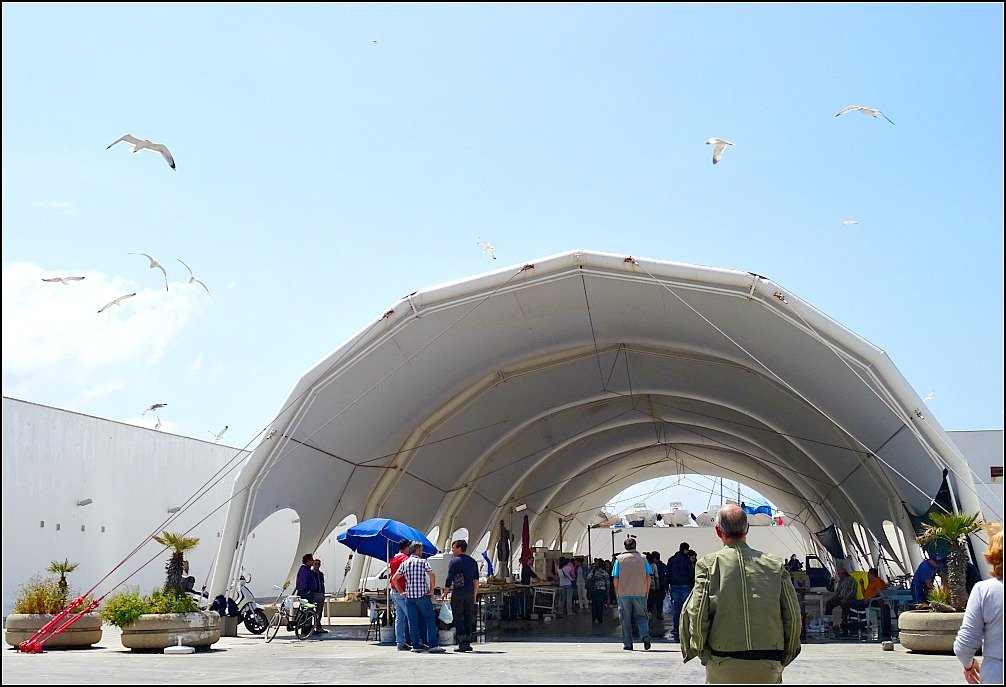 A white igloo shaped structure on Via Cristoforo Colombo, houses the harbour-side fish market. It is relatively small but cooled by ocean breezes with plenty of fresh fish daily from 6 am till 2 pm. 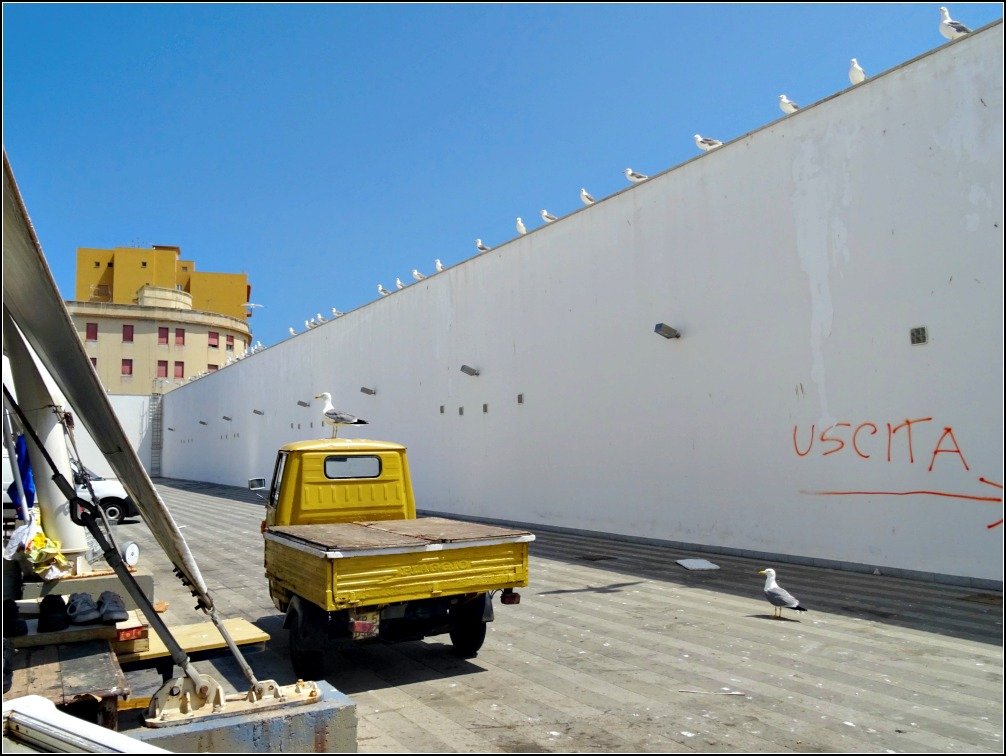 For 500 years, Favignana, an island off Trapani hosted a yearly Blue Fin Tuna festival, but in 2009 it was cancelled due to the lack of tuna fish. Locals blame this on Japanese, Taiwanese and Korean overfishing in the 1960’s. 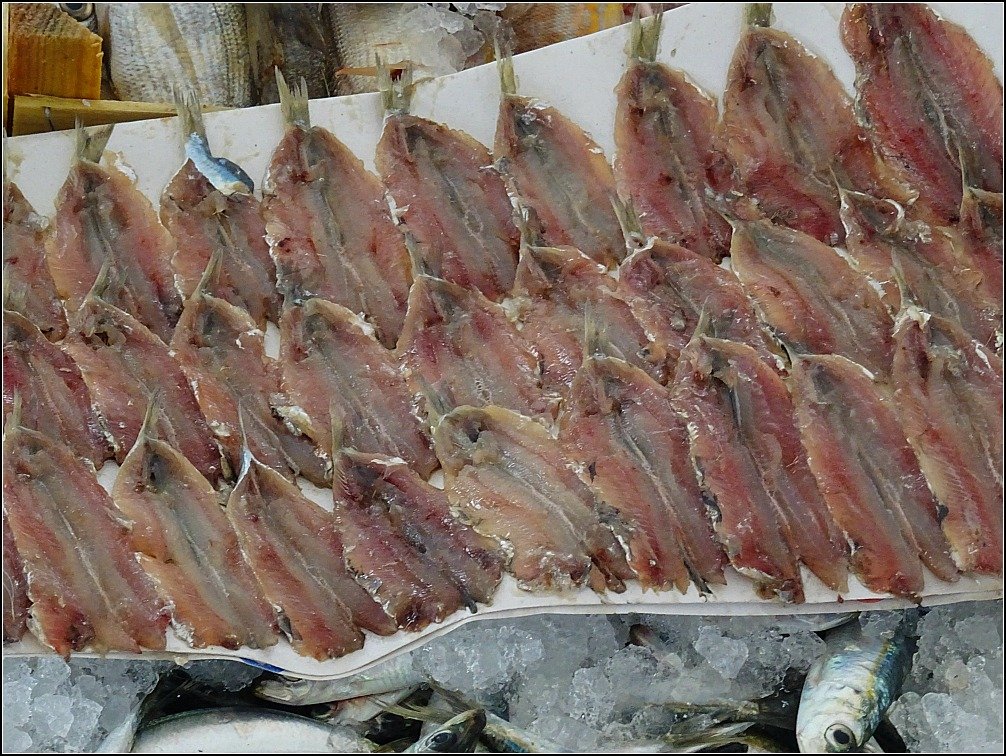 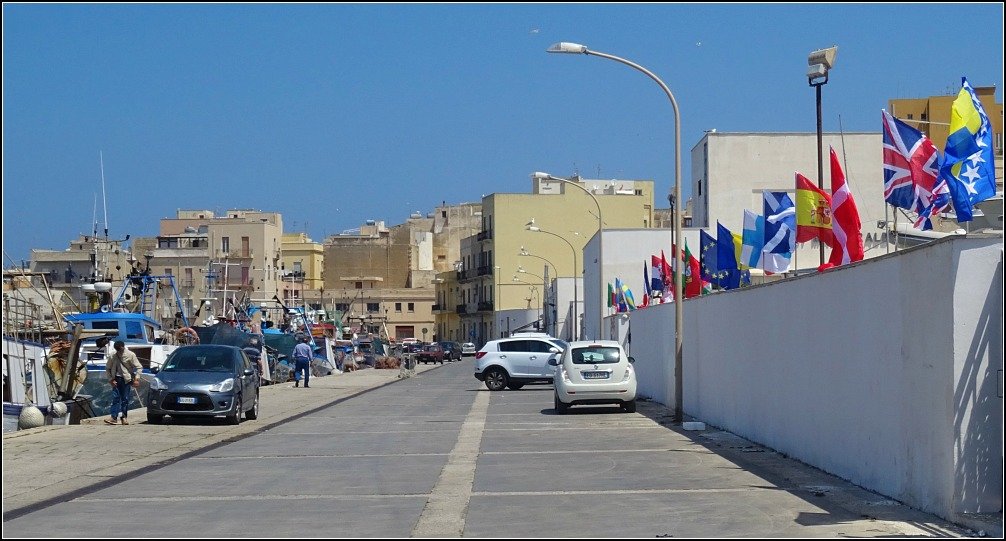 Fresh Fava Beans and Dill on sale outside the fish market. I’m thinking that the locals use the beans (and dill) in a fish dish. Two men sat beside their dilapidated trucks peeling beans and dropping them into the pile. 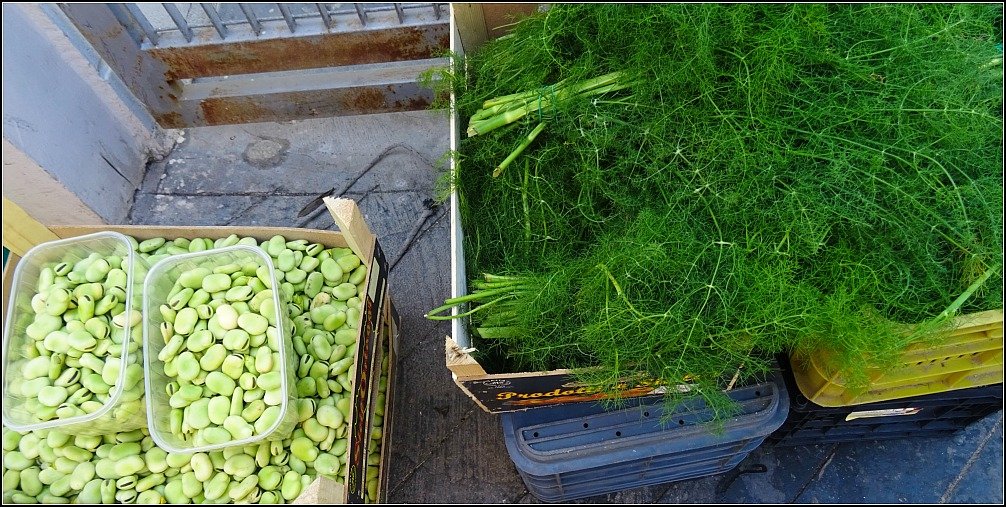 A Moorish influence can be found in the small lanes of the old town, but the grand buildings are all in the Spanish Baroque Style. I’ve shown some examples of Trapani architecture and Trapani travel tips previously. 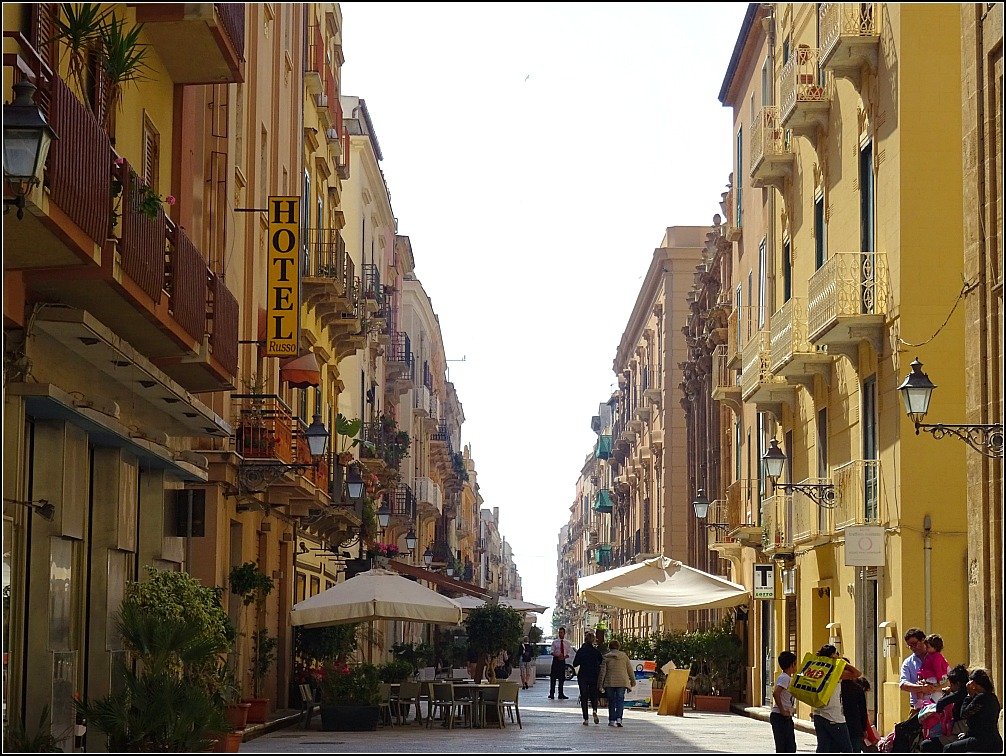 Once the Senate House, Trapani City Hall lies at the east end of the pedestrianised Corso Vittorio Emanuele. Clock and Calendar look down from a beautiful Baroque facade. It’s also known as Cavarretta Palace – commissioned in 1672 by Giacomo Cavarretta.

There’s so much going on in this photo, it is one of my favourites. 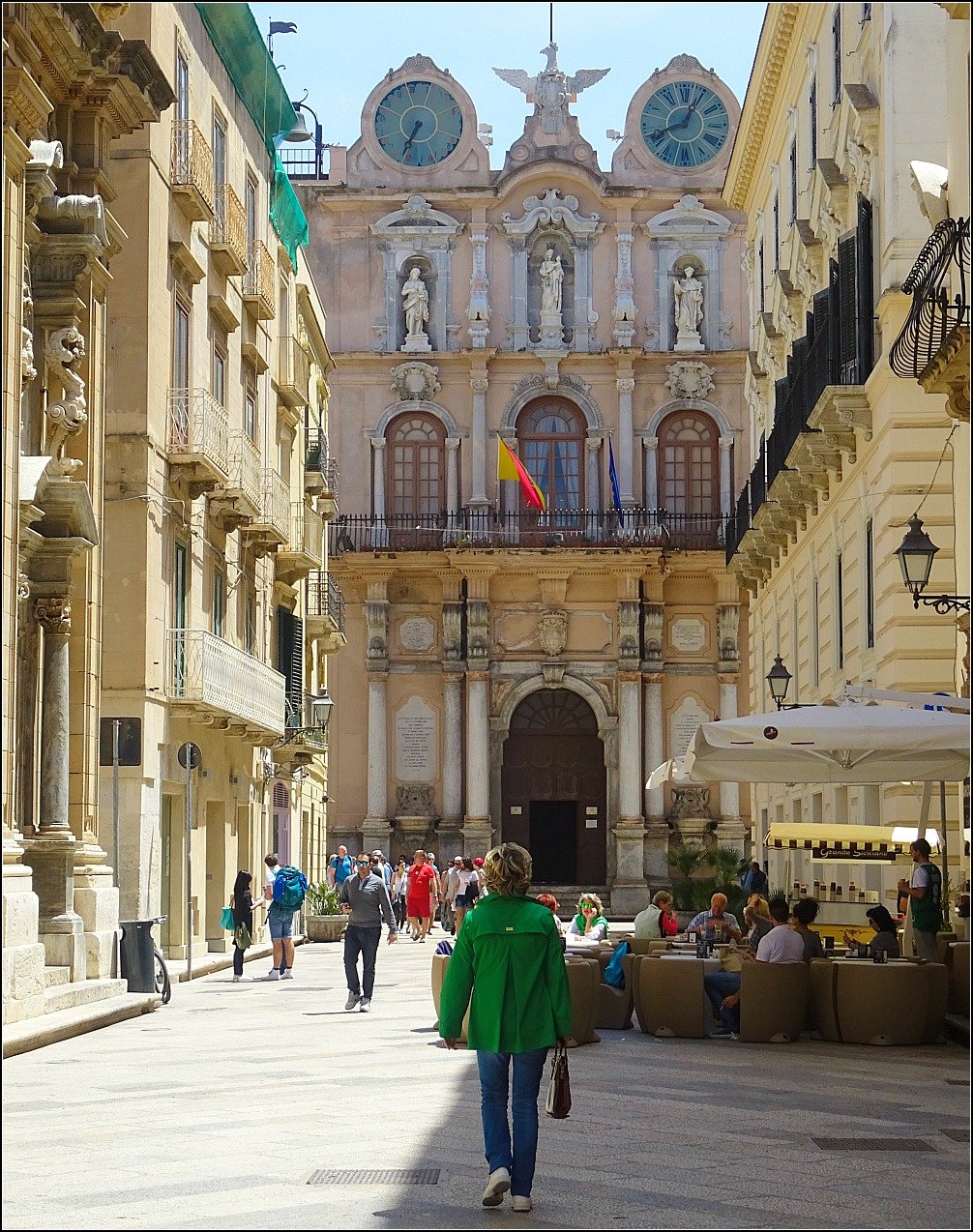 In August 1937 Mussolini was photographed standing on this very balcony at Casa del Mutilato with his arm raised in Fascist Salute. 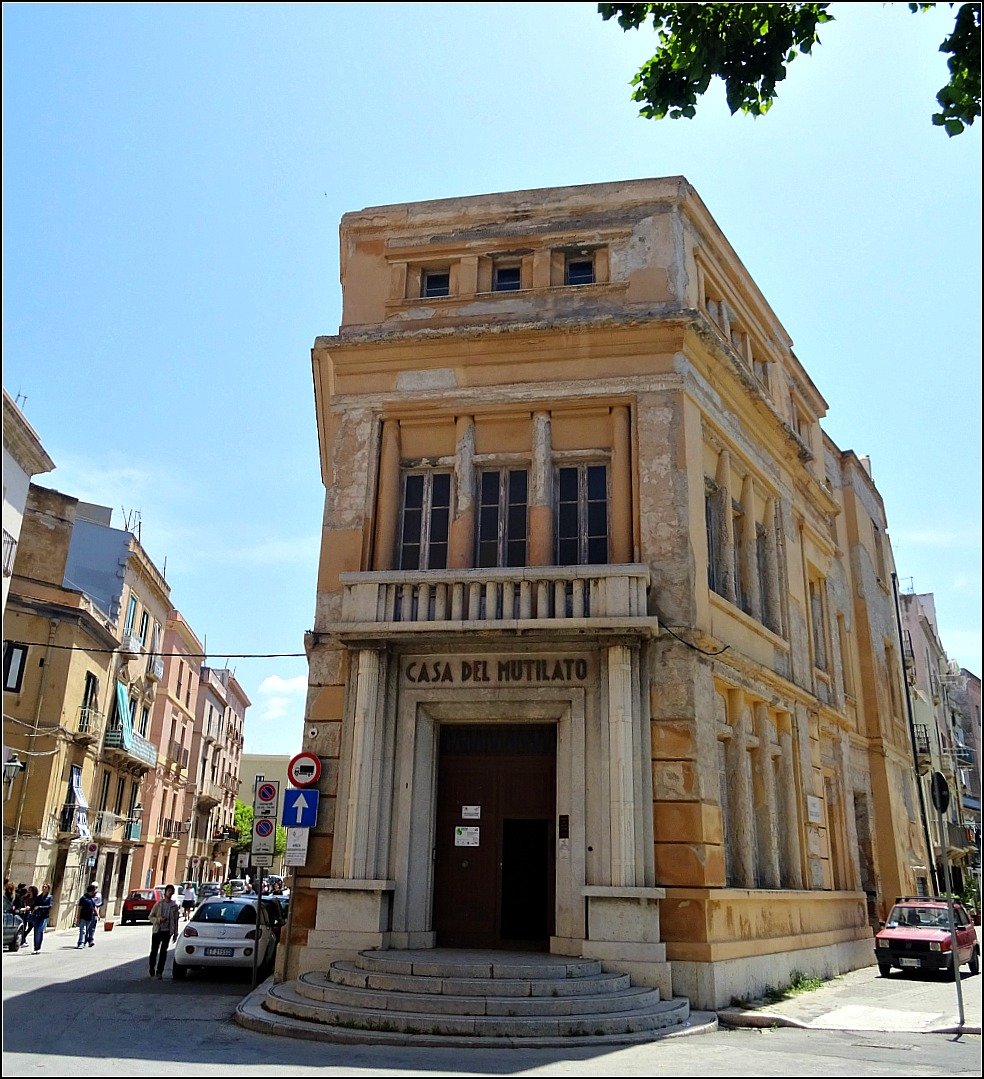 Venus statue and fountain at the old fish market. 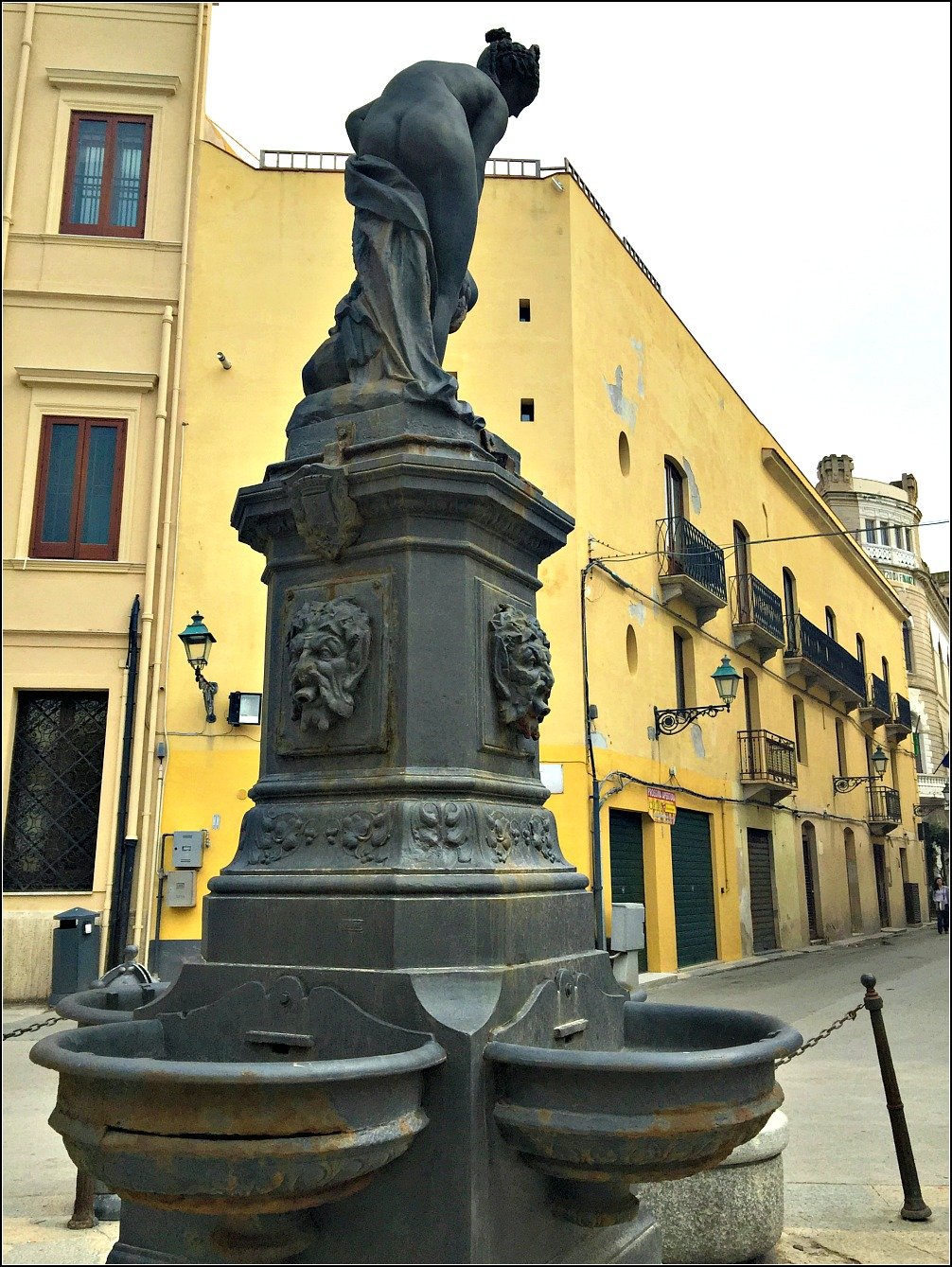 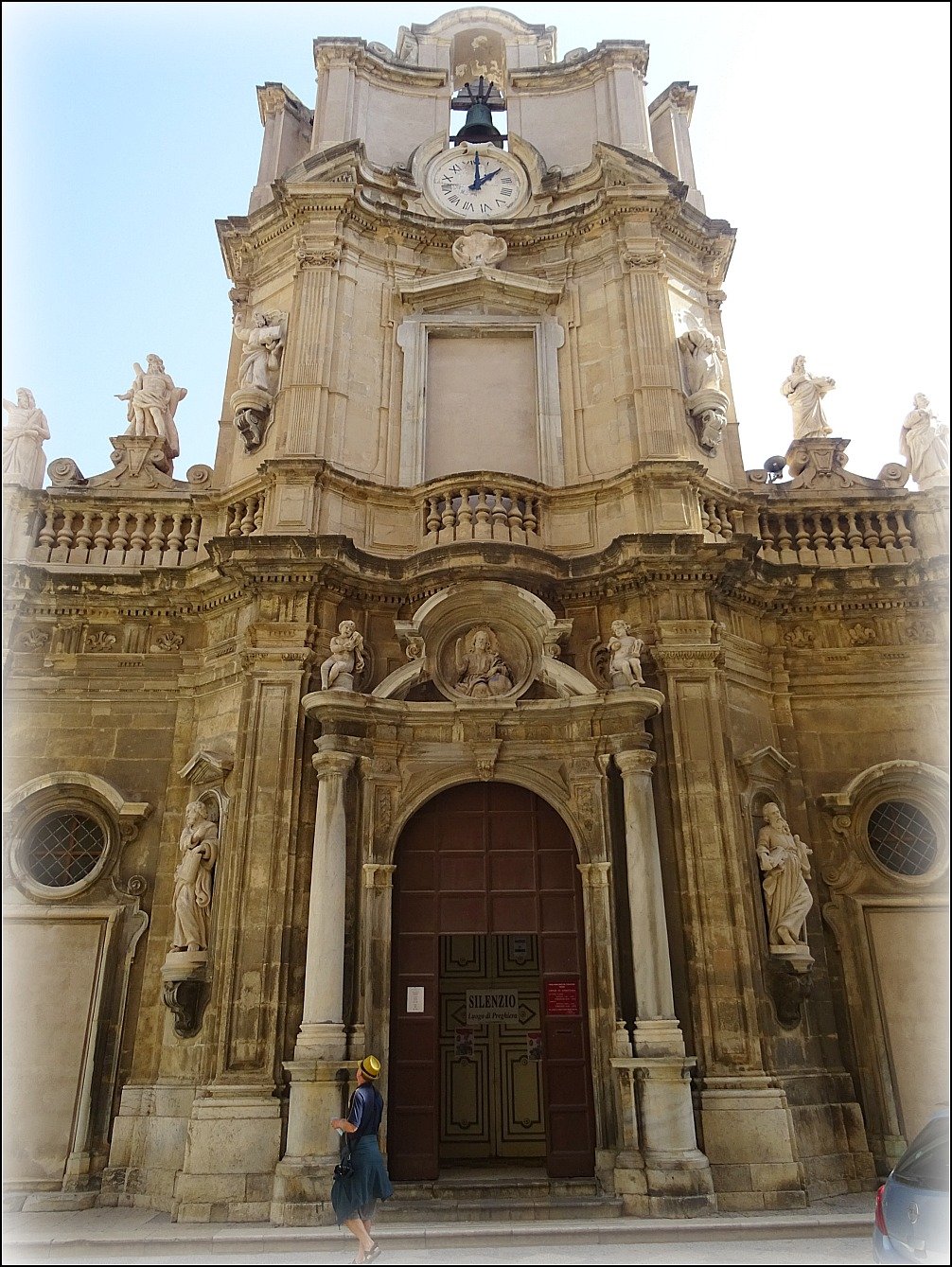 To my mind the Chiesa del Purgatorio, is a stand out Roman Catholic Church in a Country famous for it’s churches. The interior walls are lined with life-sized timber statues (Misteri) that get an airing each Easter. Paraded around town, they are followed by the congregation with attendant band playing dirges to an austere drum beat. The highlight comes on Friday afternoon when the 20 Misteri are hauled by guild members, 1km from Purgatorio up to Via Giovani Battista Fardella. The atmosphere is similar to the fervour that Andalucian Holy Week parades generate.

The workmanship of the Misteri is quite beautiful. 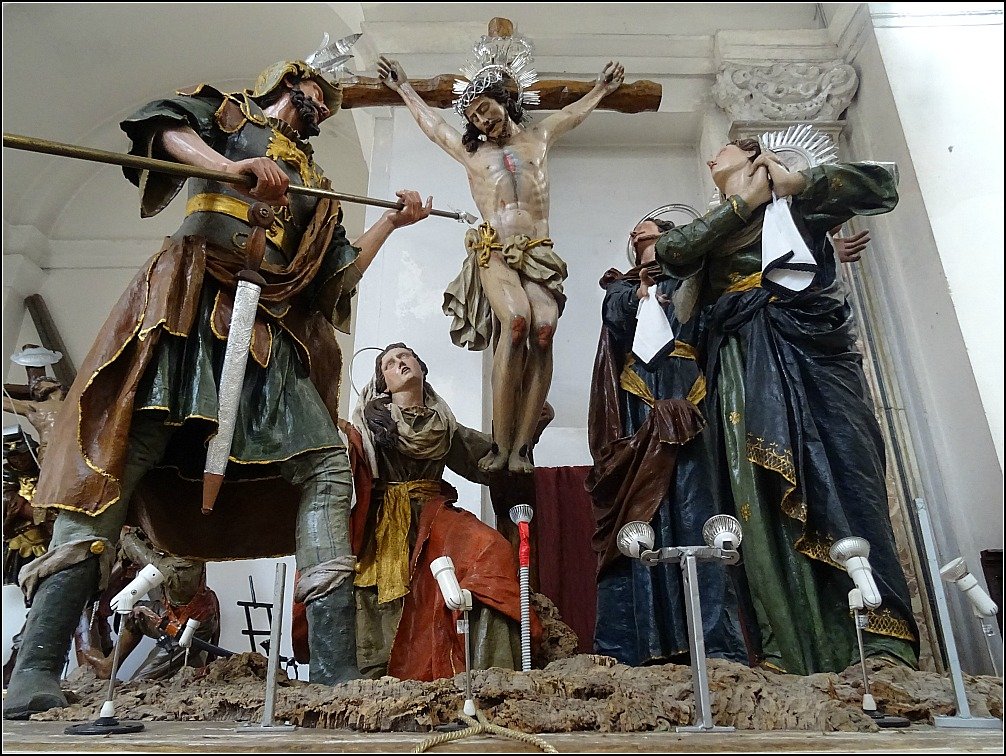 Book Accommodation well in advance to witness the parade. To see the Misteri without the crowds, visit Chiesa del Purgatorio just off the main Corso. Some of the original Misteri date back to the 18th Century and are kept in tip top condition. Others of the massively heavy Misteri were destroyed in WWII bombing or by being dropped during procession. This church, with explanatory panels in multiple languages, is well worth a visit.

A Passegiata afternoon stroll down the Corso from Trapani City Hall to the Cathedral of San Lorenzo is the thing to do.

The Cathedral of San Lorenzo in Corso Vittorio Emanuele. 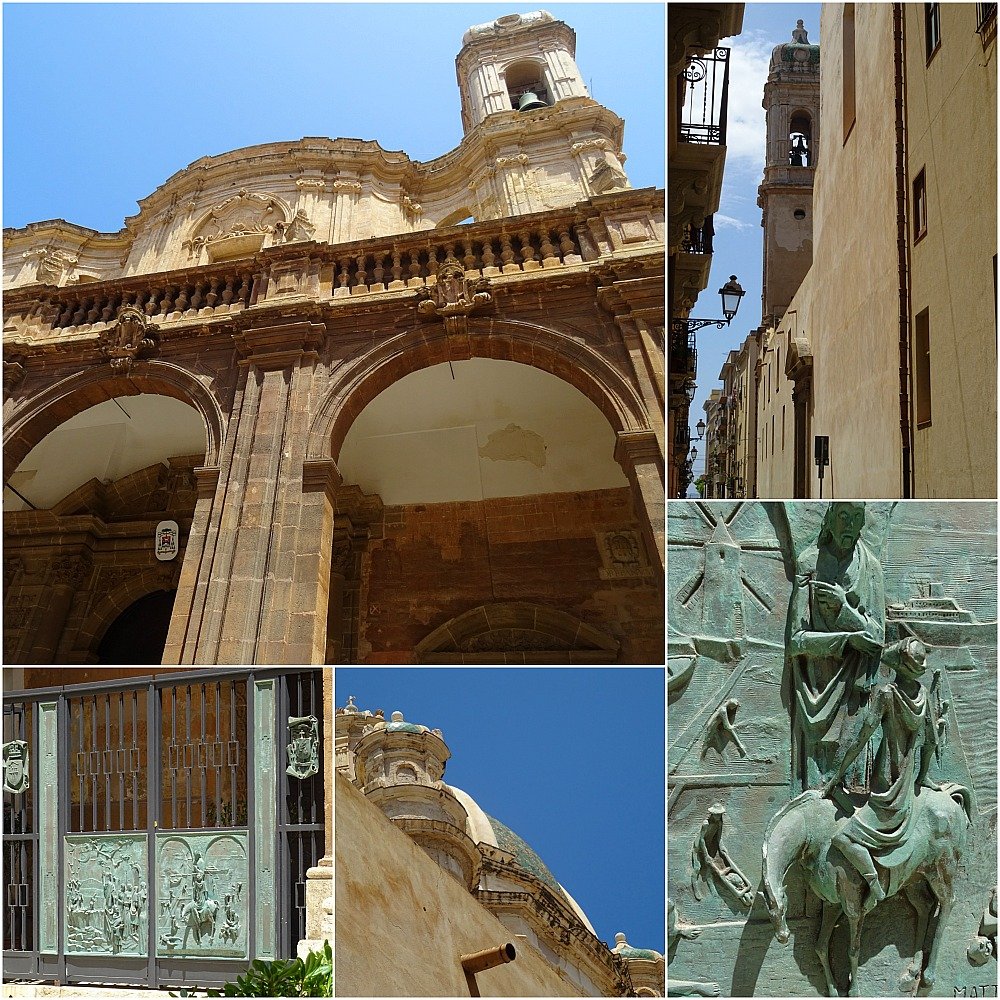 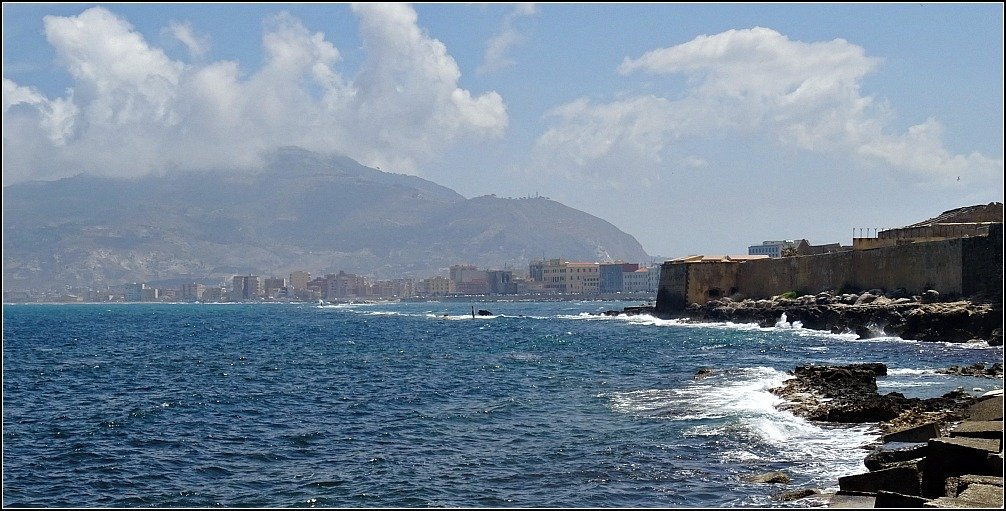 I think there is something romantic about being in Europe and yet so close to Africa. Have you been to Sicily and Trapani? I’ll be sharing another post on Trapani soon.

Thanks for reading and commenting – we really appreciate it. If you have a blog we would love you to add your travel post to the link below for Nancie’s Travel Photo Thursday which we co-host with Ruth from Tanama Tales and Rachel from Rachel’s Ruminations.

Palermo or Ziz
Next Post: Is Mirogoj Cemetery Zagreb the most Beautiful Cemetery in Europe?