After a relaxing sojourn in my favourite place in the world, Luang Prabang (a big call I know), we were travelling in a taxi from the Suvarnabhumi Airport to Lamphu Treehouse (excellent budget hotel) at 155 Wanchat Bridge Pachatipatai Rd. Phanakhon Bangkok. 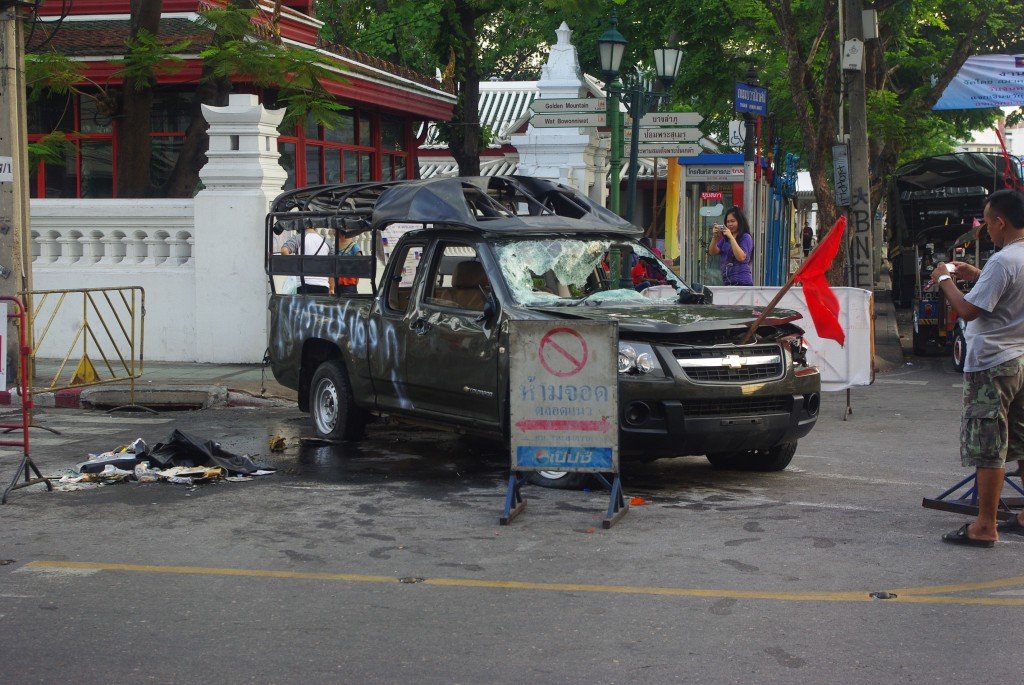 About 1 kilometre from Lamphu Treehouse Disaster No. 1 struck.  The taxi got stuck in a traffic jam for over half an hour.  Our driver explained it was because of red shirt protestors blocking the road near the democracy monument.  As the taxi was overheating he asked us to get out so that he could escape with his taxi, down a side street.  He told us to keep walking straight down the road toward Lamphu Treehouse only 1 km distant.  So we left the semi-cool of the cab and started walking in 40 degrees of humid heat toward our destination.

Thankfully Canada held no unwelcome surprises for us and the trail of destruction had ended.

In two weeks time we will be travelling to Spain, Portugal and Morocco.  Our first port of call will be Barcelona, then Madrid.  I feel desperately sorry for the unemployed in Spain.  It is hard to imagine that half of the population under the age of 25 is unemployed and the overall unemployment rate is 23%.

I did realize this when we decided to go to Spain, but I did not think about the possibility of demonstrations and strikes, or their repercussions, although you would think that I might.  Unfortunately it is against this background of high unemployment that the Spanish government has introduced strict new labour laws and austerity measures, which has in turn led to the recent strikes.  Over one million people were involved in Madrid alone.   I hope that the violence does not escalate to the levels that the protests in Bangkok did.

This is the News Article that first alerted me to the strikes.

This is the link to a blog post about the recent strikes, by Erin of La Tortuga Viajera.  Erin is an American married to a Spaniard and living in Madrid, so I guess you could say she has her finger on the pulse.

I have thought about whether it is responsible to travel to a country that is in the midst of such turmoil, but surely it is better for Spain to be earning money from tourism in these tough times.  If tourist numbers were to plummet, the unemployment rate would surely rise even more.

I just hope that our uninvited predilection for disasters, both man-made and natural, in 2010, is not set to continue during our 2012 trip.  Fingers crossed!