This is our third week back in Australia after our two month visit to Spain, Morocco, and (Portugal (Lisbon), and I have a confession to make.

I have not finished unpacking my bags.

I have unpacked all the goodies that we bought  – that was the fun bit.  I spread them out on the guests’ bed and every time I walked past the room I eyed them fondly.  Fondly because of  the memories!

Let me tell you the story about my favourite souvenir – The blue linen and (vegetable) silk table cloths, that we had so much fun purchasing.

Bored with the same, same but different shops, we ducked into an alley where I immediately spotted a shop festooned with coloured cloth.  I flittered between several until he swayed me –

Buy the blue, it is Essaouira Blue and every time you look at it, you will remember.

Perfect logic and  I DO think of Essaoiura every time we use them.  They wash beautifully,  just as he said they would, and I wonder why we did not buy more.  Well I do know why – because our bags were full! 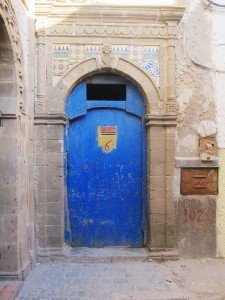 Originally it had been one huge piece of material, to be used as a shade sail or maybe as a decorative African tent over an entertaining area.  When I said it was too big, he laughed –

No Problem, we own the upholstery shop next door,

and it was cut in two and hemmed within 10 minutes. 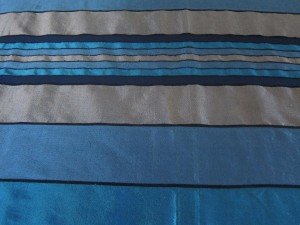 But while we were waiting would we like to look at his own shop?

It seemed we had bought the cloth from his father’s shop.  Father sat on the floor covered from head to toe in a coarse brown djellaba not unlike a monk’s robe.  I did not even notice him until he chimed in to approve the price I was offering.  So down the alley we went.

He was charismatically confident, with long dark curling hair, tied back to reveal a nasty scar on his neck.  Upstairs in the alladin’s cave of an office there was the photo of his own son, taking pride of place.

We were shown things of his own design.  As well as cushion covers sewn from cut-offs from the upholstery shop, showing an eye for colours, there were his more out there creations.

Mirrors were framed in car tyre rubber,  painted black so as to look new.  He pointed out the  Bridgestone – Made in Poland  imprint on the rubber, and chuckled –  I changed that – Made in Morocco now!   Some frames were made from sardine cans beaten flat.


Rattan shopping baskets had been turned into designer bags.  They were amazing, however the material he had used to adorn them, was already fraying and the hand sewn stitches looked fragile.  But, he said, morphing into decorator mode,  they need not be used as bags, they were perfect to store magazines in, in the home.   A good idea, true, as the bag itself was sturdy, but once again our own bags said no.

When the material was returned to us we discovered there was one fringed edge on each piece which looked odd.  Not a problem, back to the upholstery shop it went, and while we waited in the alley, we were introduced to his younger sister who had come to enjoy some fun with the tourists.

There was much banter about my being a Berber –  pretending that I had driven a hard bargain.   But I knew differently –  I start out low, but then I glimpse the look of disbelief on the seller’s face and before you know it I have paid twice the price!

Conversation turned to alcohol which happens quite often in Morocco.  We were asked if we indulged.  I admitted to moderate drinking habits and Marty said that he did not drink – he drove.

Our Moroccan friend had a story about the scar on his neck.  He had been in a car accident, and his friend, the driver, had been drinking.  The car had rolled eight times.  The gash in his neck was sewn up, but his jaw was broken and needed to  be wired together.  After that he had to drink everything through a straw for 8 weeks.

When he left hospital he went to a bar and ordered a beer and the barman said that he could only have a beer if he ate something.  He replied – I wish.  The moral of his story was that now he does not drink alcohol and goes nowhere that his own legs cannot take him!  He is reformed.


As we left, three cushion covers were popped in the bag for the price I had offered as well, amidst more talk of Berber traits.

The experience was the real souvenir and I am sure we will remember it long after the tablecloths have gone.  And my half unpacked bag? – It is tucked down behind the bed where nobody can see it!