The so called Valley of the Temples in south-western Sicily sprawls along the ridge tops near the town of Agrigento. The ridge falls away to valleys on both sides, one lush green and treed toward the town and another over brown then manicured fields to the ocean. On this side the fields are divided by a Plane tree lined road that follows the southern central coast toward Trapani on Sicily’s N-W tip.

It is puzzling how these ridge top temples got theValley misnomer or why the name has stuck. The temples of what was the ancient town of Akragas (Agrigento) were purposely built on the ridge to guide their sailors home.
[pinit] 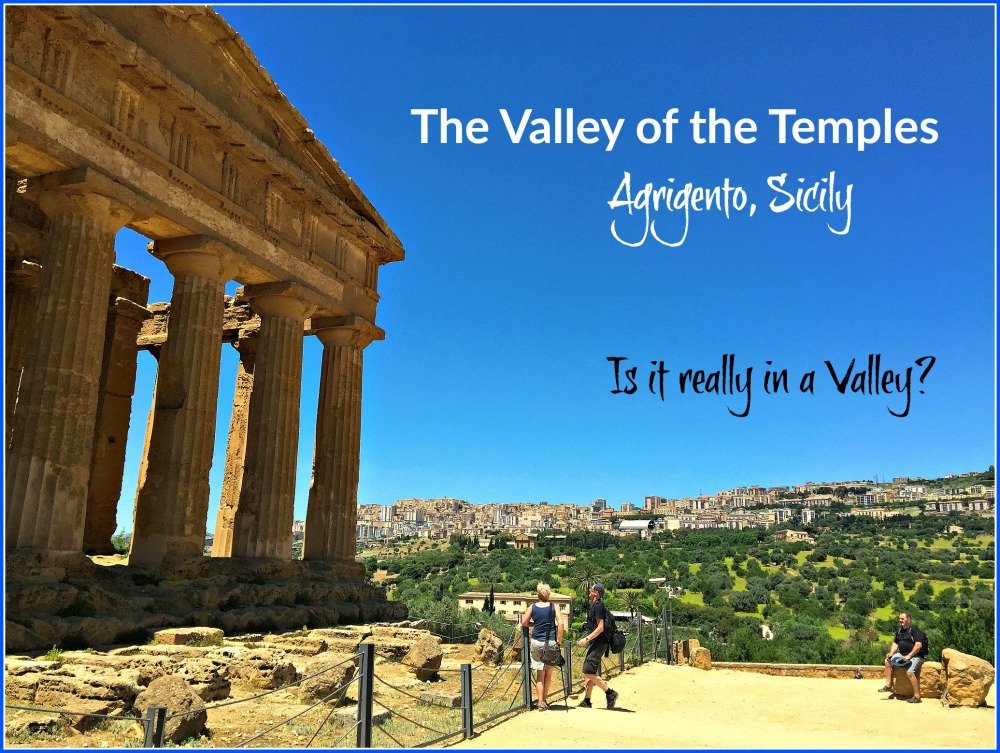 The View to Agrigento from the ridge. 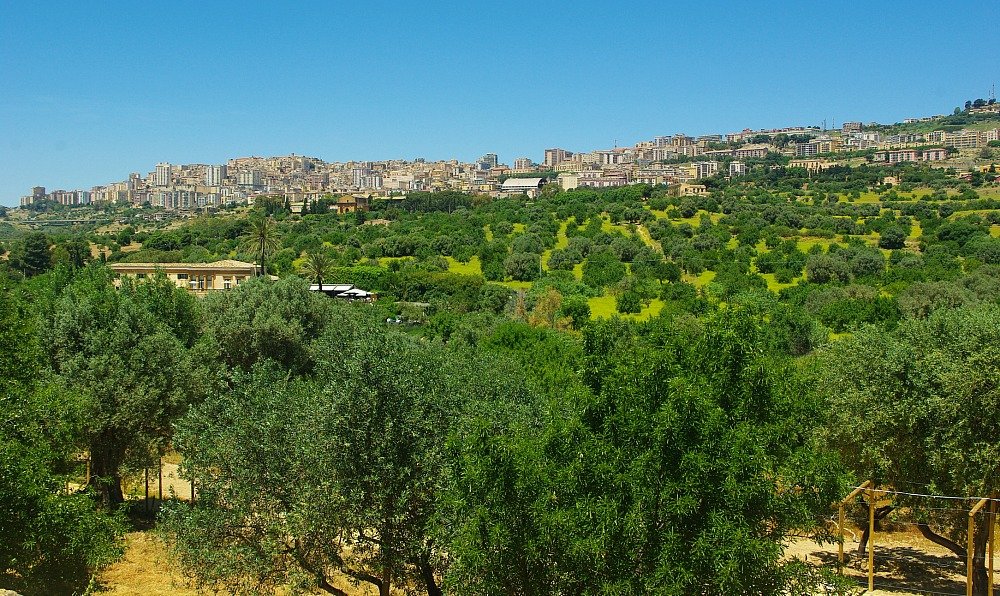 The other view to the Ocean. Great views! 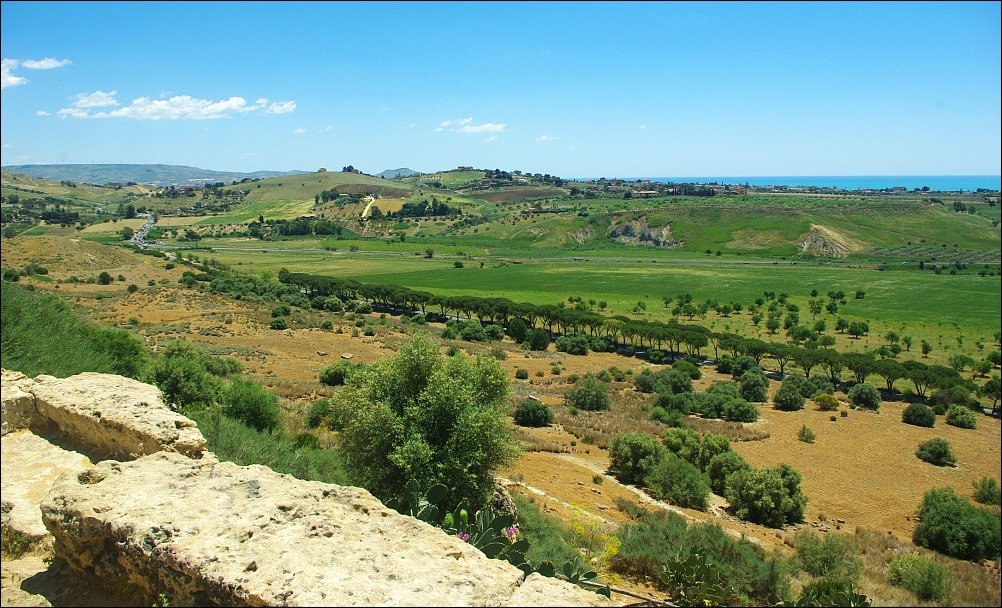 A site split in two.

The remains of the Temple of Zeus with Agrigento in the background. 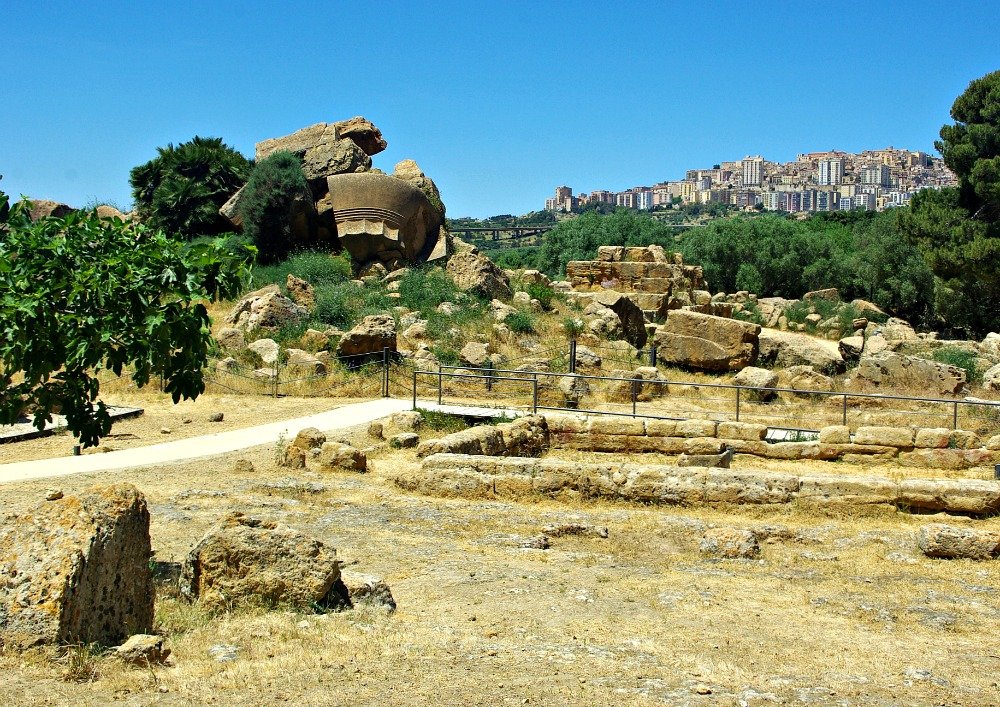 Arriving at the Valley of the Temples

Our (my) plan was to leave Modica and drive north-west via Piazza Armerina (recently uncovered villa mosaics) and on to Palermo airport where we would return our rental vehicle.

I should have known Marty was planning a coup when we somehow visited Piazza Armerina on a day trip from Modica. I thought this was merely to enable a less hurried trip through the centre of Sicily to Palermo on the day of our departure. However on that morning he threw his curve ball.

I’ve noticed over the years that Marty hates driving the same route twice and admittedly we’d had a horrible time on the return journey with the contradictory road signs. He proposed instead driving west through the Mafia hangout of Gela, past the Valley of the Temples at Agrigento, changing to the A29 just before Castelvetrano, then on to Palermo Airport – Google Maps suggested a trip time of 7 hours 15 minutes. Marty was hopeful from the start that we would have time to visit the temples. I was not so sure.

As is the Sicilian way, the trip took longer than expected, mainly due to traffic congestion in Gela and by the time we approached Agrigento, the schedule was out the window.  I was waffling on about there not being enough time to stop, when we simultaneously spied the temptingly visible Concordia up on the ridge. With the Cha-Ching of late penalty fees ringing in my ears, our vehicle magically diverted off the highway toward it.

Frustratingly it took an hour (the coup leader refutes this fact) to locate the correct entrance, park, pay, cross the overpass and gallop along the ridge to …

The Temple of Concordia.

For those who like facts and figures, the temple is 6 columns wide and 13 columns long, each column having 20 fluted grooves running top/bottom. Built as a Pagan Temple in 430 BC, Concordia become a Roman Catholic church in 597 at which time it acquired the arched wall structure within (restored back to a temple in 1748).

Back in time the columns were covered in white stucco and the roof with marble tiles, a combination that would have dazzled on a sunny day, but I quite like it’s current earthy tones. This temple is one of the most recognisable and important remains of the ancient Greek civilisation, it’s facade represented in the iconic Unesco logo. 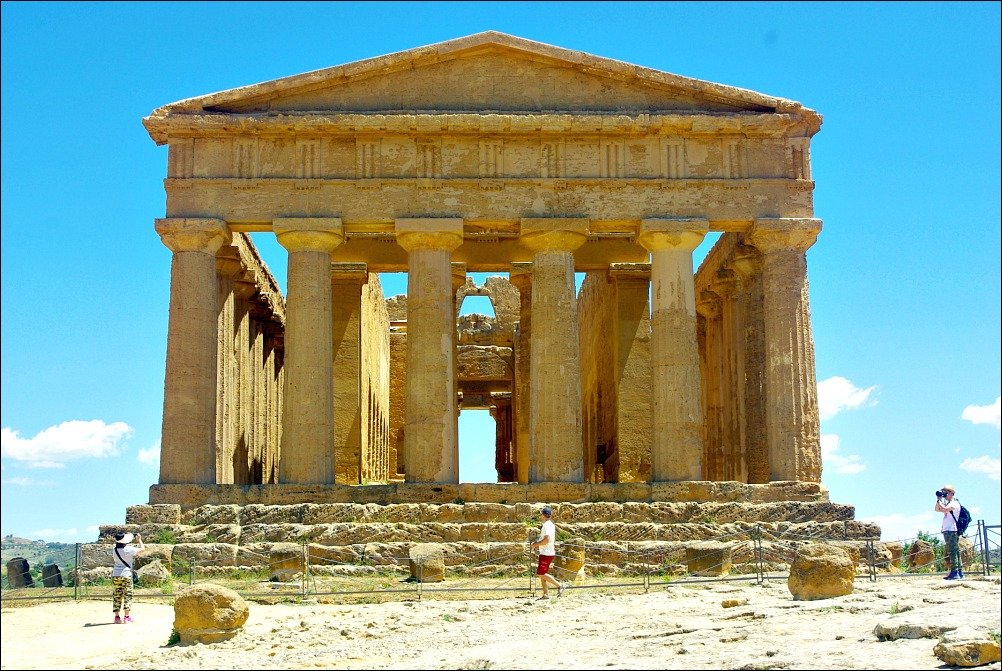 There are two schools of thought as to why this temple in particular survived intact. The first is the flexible layer of clay concealed, maybe knowingly, beneath it’s rock foundations, cushioning the temple from the earth’s movements. The other is the internal arched walls added when it transitioned to a church.

The long straight pedestrian road within the site builds suspense with direct temple views into the distance. 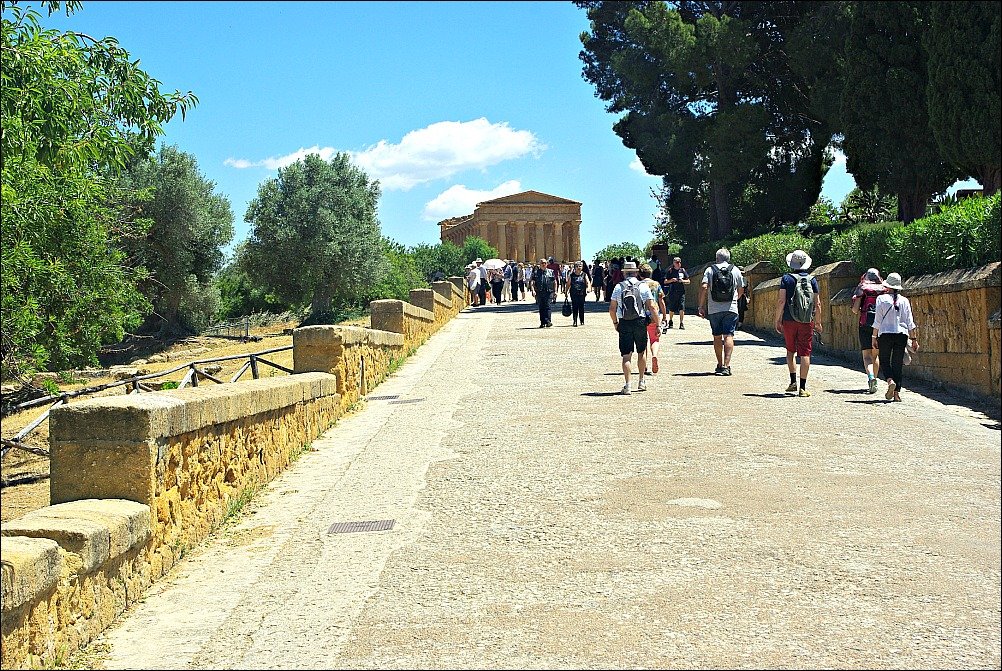 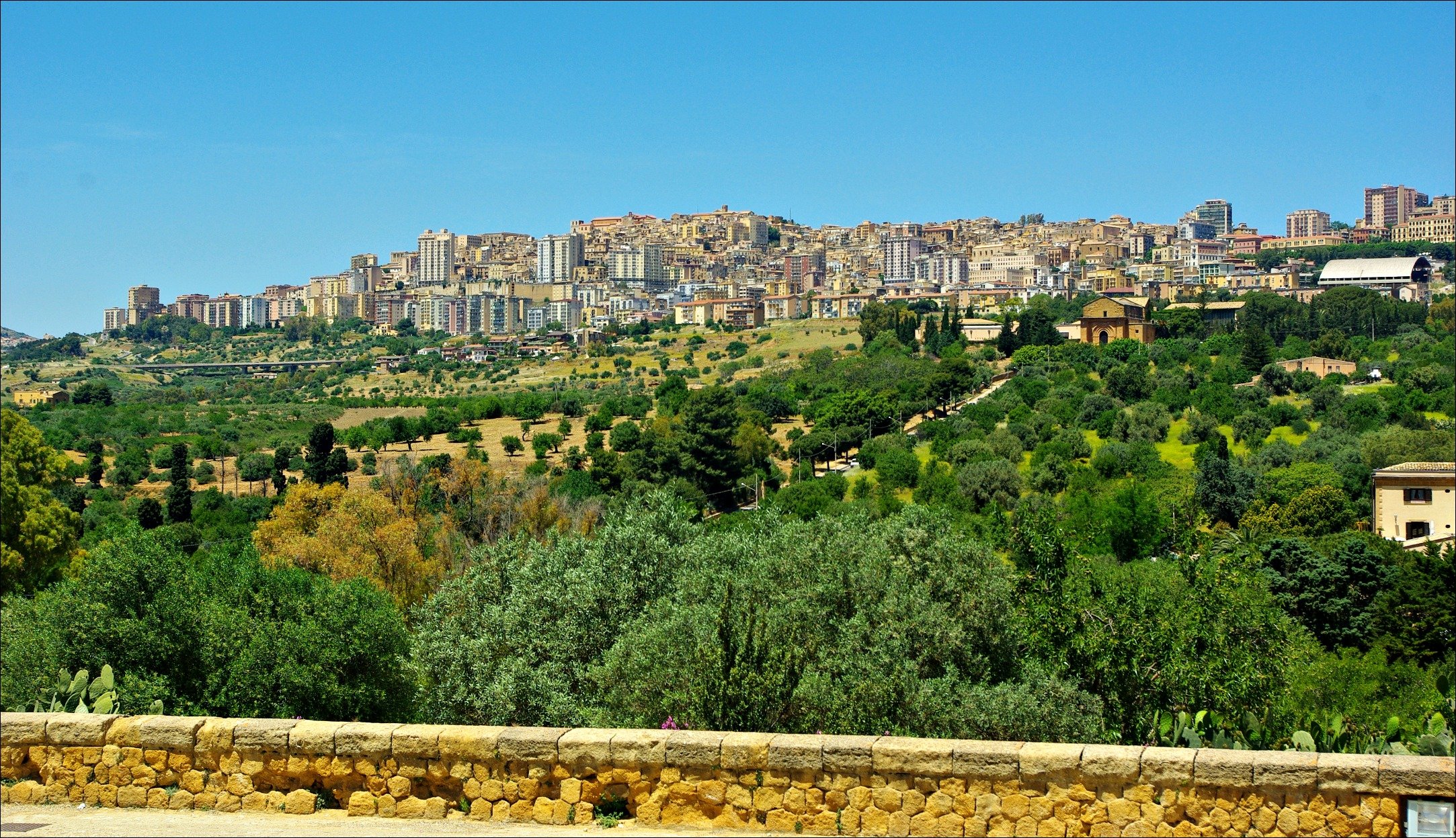 A bronze statue of a fallen Icarus lies in discarded fashion on the ground beyond the Temple of Concordia. It’s been there since 2011 when it formed part of an exhibition of (17) sculptures by the Polish artist Igor Mitoraj. The statues, some of supersized proportions, would have added an extra dimension to a day at the archaeological ruins. I couldn’t help wishing our visit coincided with what was one of Mitoraj’s most popular exhibitions.

Tip: Look for the hidden Medusa head in the wings of Icarus.

The way the statue is posed on the ground adds interest and accessibility, especially for children. 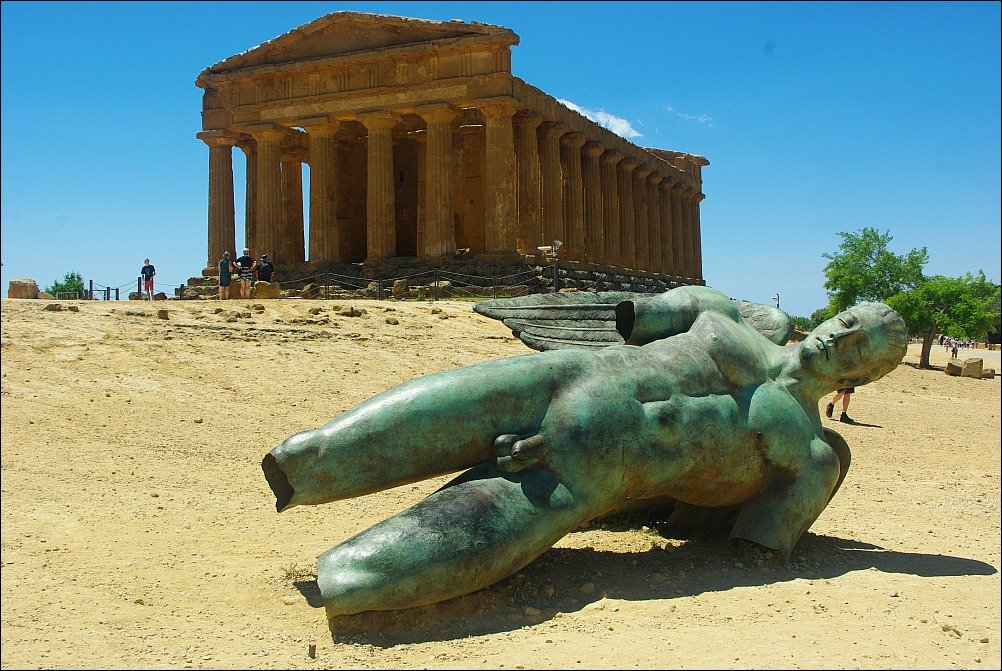 A fenced enclosure houses a small herd of Girgentana goats. Originating from the Kashmir/Afghanistan region, the goats arrived on Sicily’s south-western shores via either the ancient Greeks or Arabs. At one stage they numbered 30,000 but today they are endangered with numbers in the hundreds. The breed is characterised by curved (mono) horns joined in the middle, long beards/hair and high milk yields.

I was basically raised alongside my grandmother’s herd of domestic milking goats and their rascally character makes them a definite favourite of mine. The overwhelming majority of our goats were short haired, with a good expanse of head showing between their horns. Our one long haired goat was forever getting burs stuck in her long locks. I wonder how the Girgentana goats coped with this problem in the wild.

An Association has been formed specifically to protect the goats and see them reintroduced to their traditional territory in the Valley of the Temples.

Unfortunately they were on a lower level out of my reach. 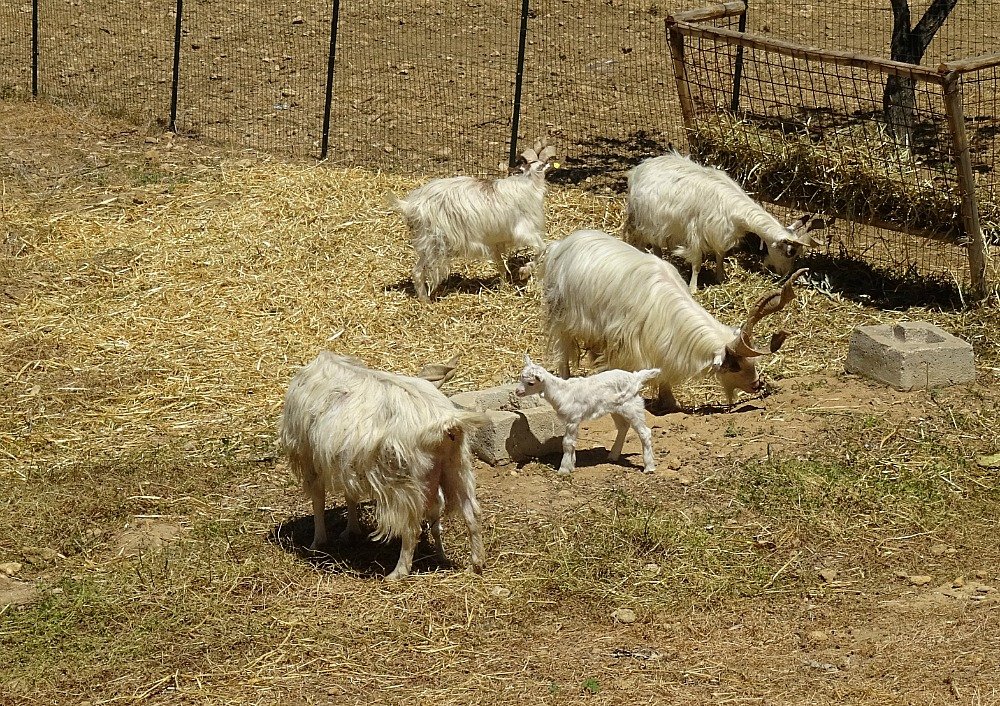 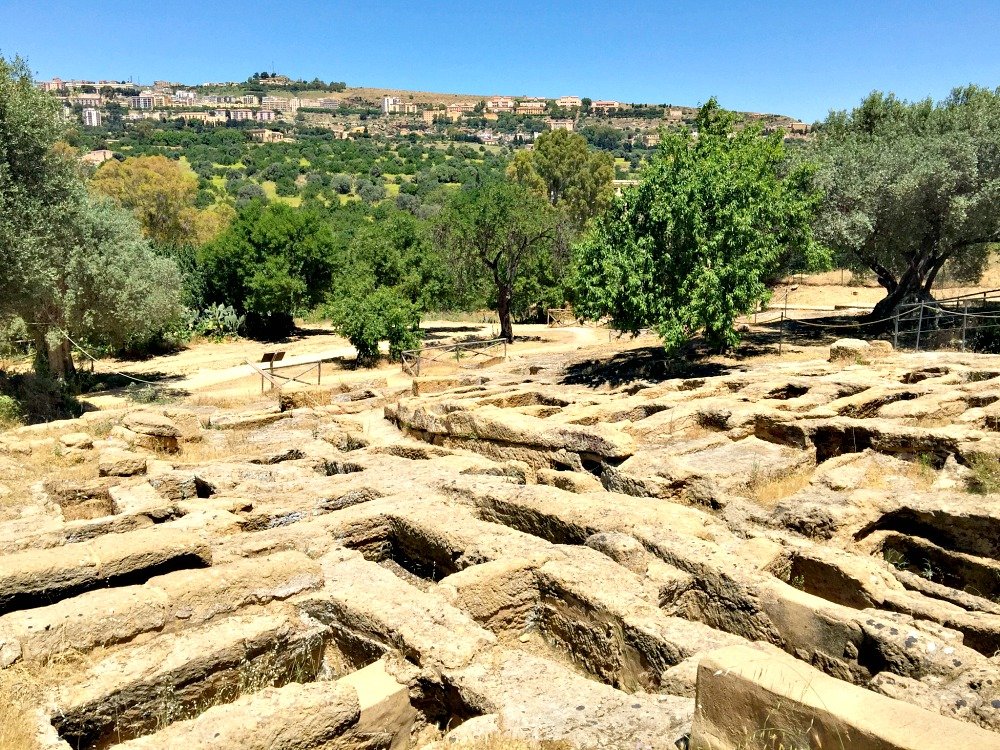 Eight columns from this temple erected at the end of 6BC have been raised and the rest are spread around nearby. 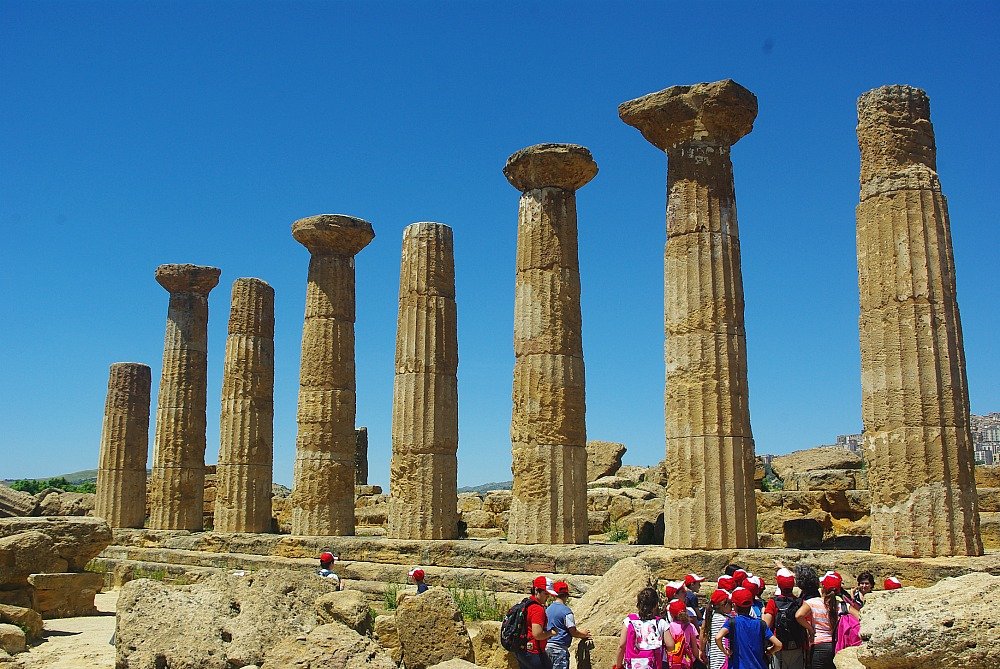 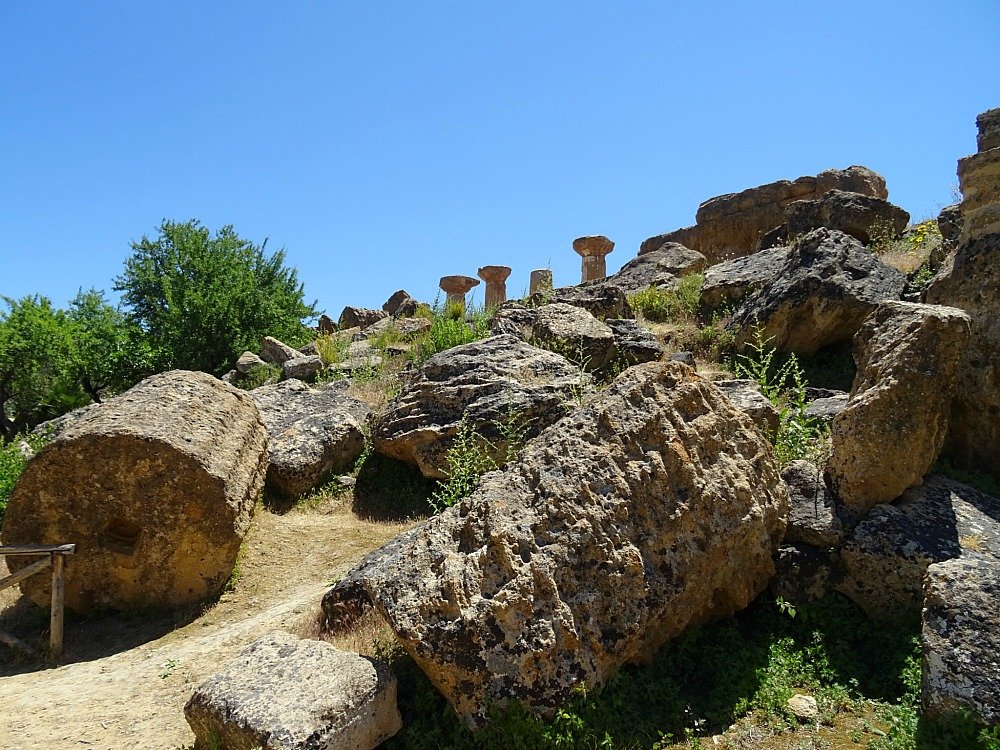 This display is a 19th Century reconstruction, using pieces found nearby. In Greek and Roman mythology the Dioscuri were twin brothers Castor and Pollux who, after Castor’s death, were transformed by Zeus into the constellation of Gemini. Wow! 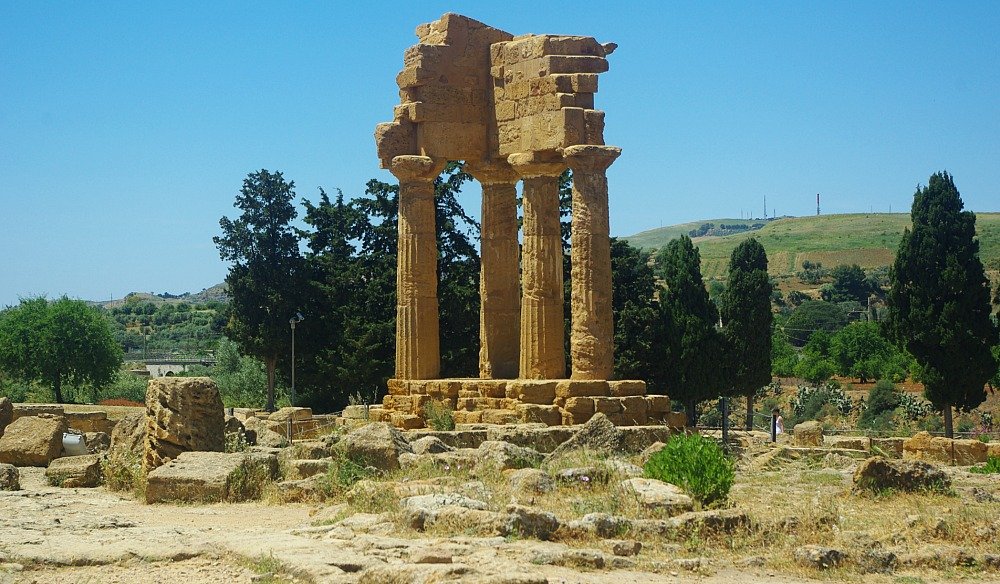 I have no explanation for these blocks resting beneath the trees, other than they seem to be biding time. 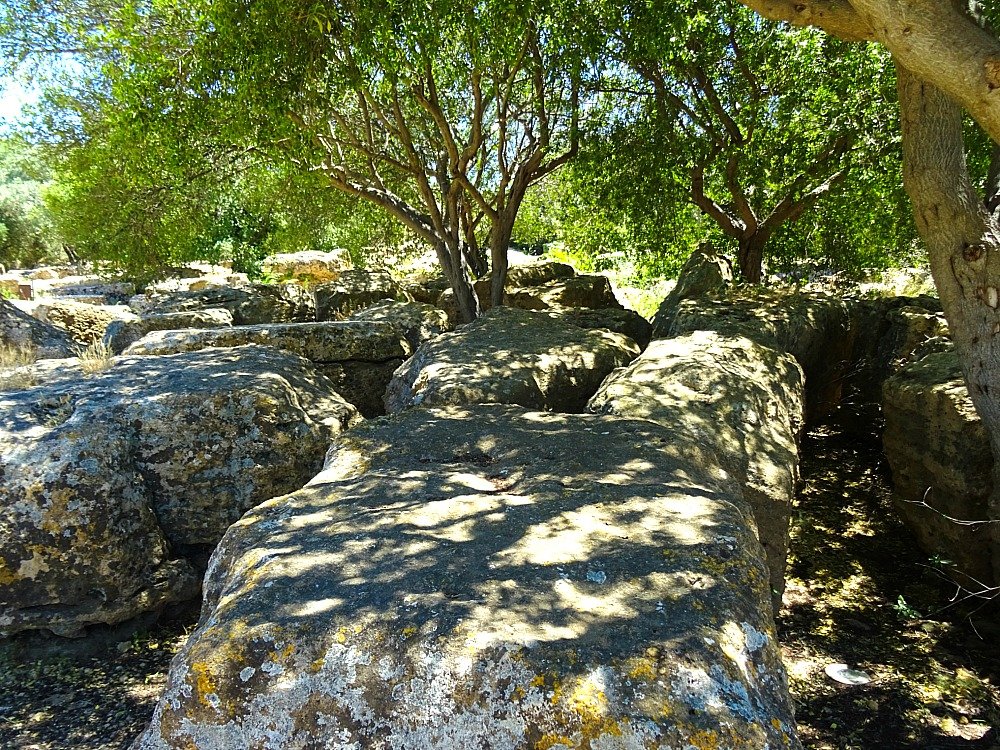 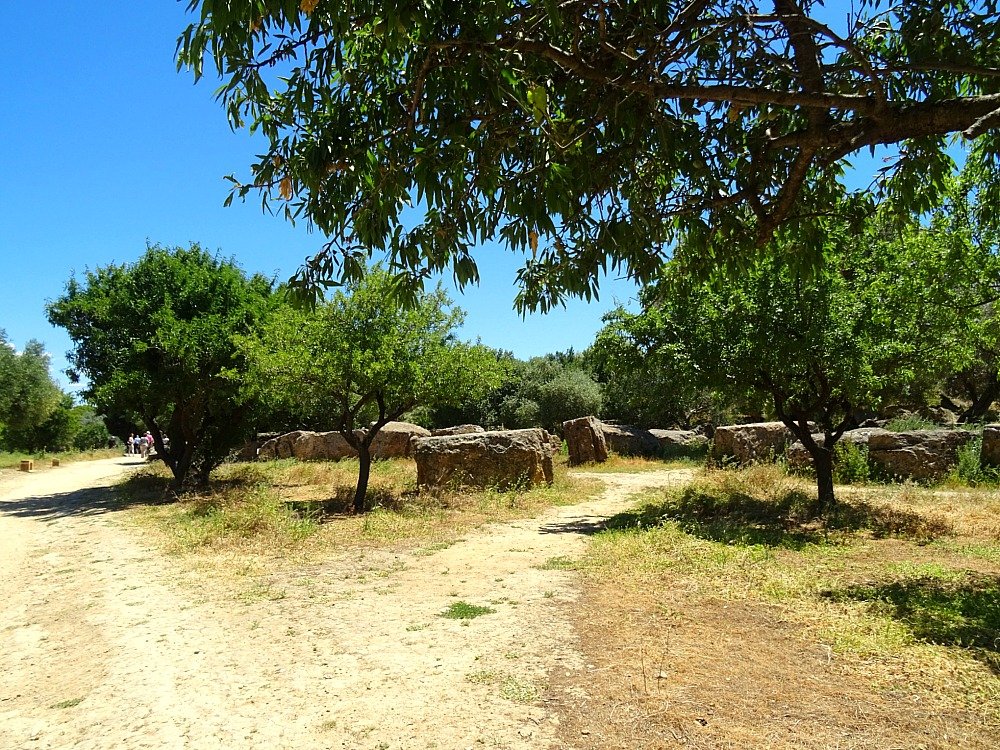 Near the Temple of Heracles (Hercules, Ercole) this Villa, the 20th Century home of Englishman Sir Alexander Hardcastle now houses park management and is inaccessible. That bronze statue in the forecourt is of Hardcastle, the ex army captain who funded many excavations on the ridge, carried out by Pirro Marconi. It was his initiative to re-erect the 8 columns of Heracles and he is now buried in Bonomorone cemetery, Agrigento – as close as possible to his beloved temples. 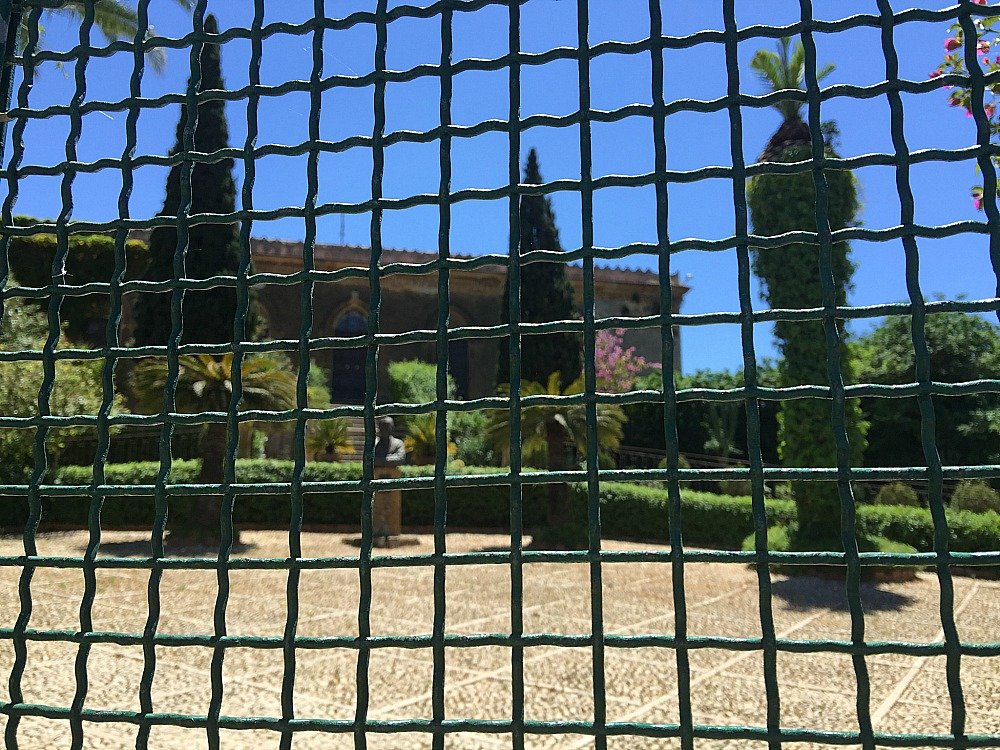 There is so much more to see at this site, like the Temple of Juno (also known as Hera) with columns and sacrificial alter, Tomb of Therone and the fallen stone Olympian atlas figures.

Was the “Valley of the Temples” worth the diversion?

Having bolted back to the car, we drove non-stop, scoffing pre-made salad rolls in the car and hoping like crazy that we wouldn’t get lost again. The car rental company overlooked our late arrival at Palermo Airport, but having located the connecting bus promptly we then had to wait 20 minutes for departure. On arrival at Palermo train station we found our way on foot to our Airbnb apartment, arriving 1 hour and 15 mins late. My brain felt like it, instead of my luggage, had rattled and bumped it’s way across a thousand paving blocks.

Was the diversion worth it?

As Marty said “We had to do it because we might never have another opportunity to see such an ancient intact temple up close”.

I agree, the answer is YES.

This was our route.

Entrance cost – 10 euro each. This was good value because of the number of sites, the spectacular Temple of Concordia and the great views.

A different plan would have seen us staying overnight at Agrigento, with views back to the temple on the ridge, which by all accounts is beautiful under lights, or at the town’s beach suburb of San Leone. Another beachy place to visit is Scala dei Turchi, 15km west near the town of Realmonte, where the white sedimentary rocks descend in terraces to the water, reminiscent of Pamukkale in Turkey.

I found this video of Scala dei Turchi on Utube.

Fort George and beyond on Vis Island Croatia
Next Post: Top Things to See in Ljubljana