Day 3 of our Eastern Turkey Road Trip dawned in Tortum, a small town we had not heard of prior to our arrival the evening before.  We had stayed late in the day hunting Georgian Churches and assumed it would be easy to find a place to stay.  It was not.

Everyone agreed there weren’t any, but confusingly they all still pointed in the same general direction.

Snow dusted the rolling hills and there was a chill in the late afternoon air.   We were relieved when yet another local confirmed we had found the mysterious accommodation.

The building had an institutional air about it and the sign hidden behind the pine trees read Tortum Ogretmen Evi. 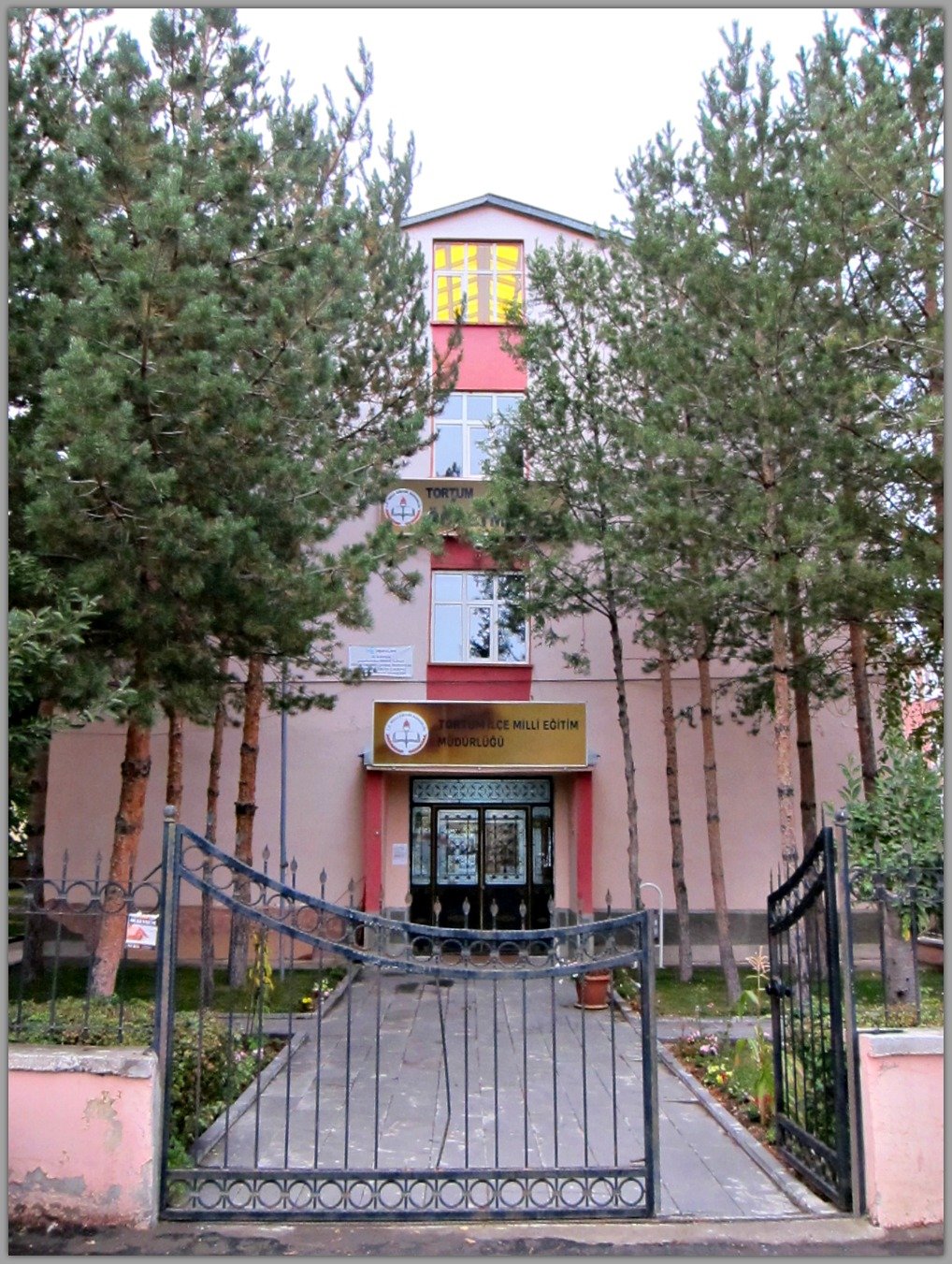 Seeing our hesitation, and in the helpful fashion of people throughout Turkey, our latest guide motioned us to follow him through the gate.  Once inside he led us up a wide double staircase, depositing us in a large Office with a Manager sitting with authority behind the desk.  Our guide was so at home that it occurred to me later that he was probably a resident.

It seemed we could stay the night for a total of 60tl including breakfast.  The  Manager,  led the way down a long silent corridor to our room and afterward to the top floor to share a welcoming glass of Cay.  It was clear then why the corridors below had been so silent – the community room was full of men – drinking Cay, talking, eating and watching television.

It wasn’t until the next morning that the pieces fell into place.  After breakfast we met a young couple who surprisingly spoke perfect English, albeit with an American accent.  It seemed it was true that there was no accommodation for travelers in Tortum, so this place, the local Teachers Hostel filled the gap.  They themselves were straight from Teacher’s Training College in the West of Turkey and would be living in the hostel for the duration of their four year posting in Tortum.  We gladly handed over the remains of our Koala and Kangaroo stickers and pencils for their students and waved goodbye to them and Tortum.  They attributed their American accent to watching American T.V. shows!

Ten minutes down the road toward Erzurum and the hills looked like they had been sprinkled with Icing Sugar. 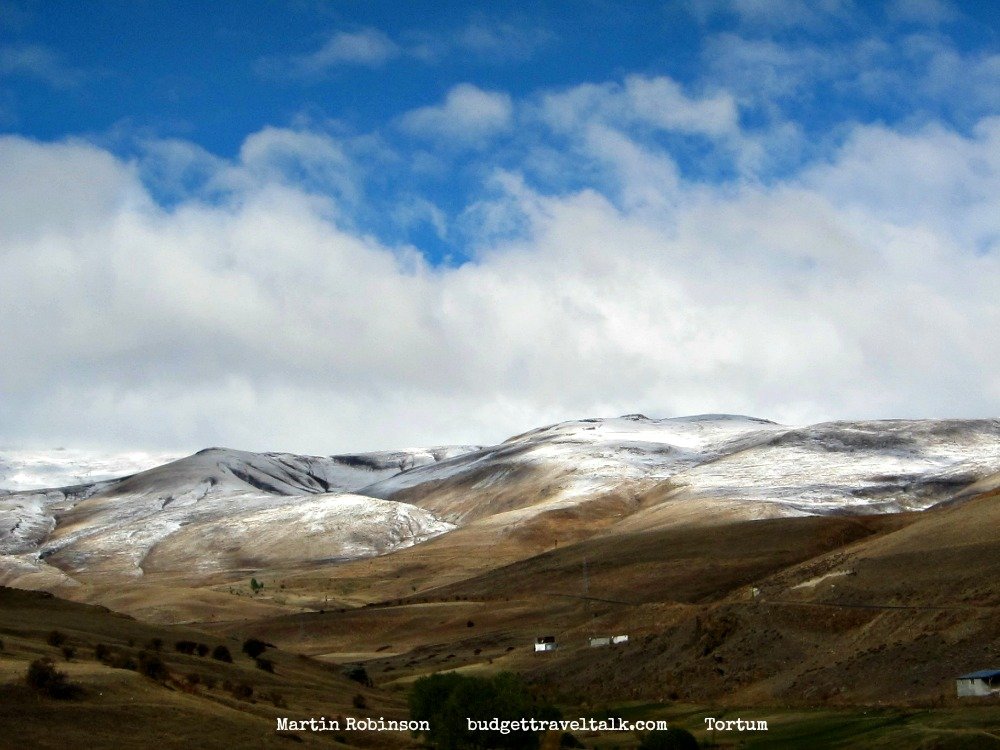 After spending Day 2 church hunting but not covering much distance, Day 3 would of necessity be taken up driving to Dogubayazit.  We decided not to visit Erzurum as at 50 km away it was way too close to our starting point.

Only 5km south of Erzurum is Palandoken, Turkey’s Premier Ski Resort and although we were to become used to the presence of snow in the days to come, nowhere was it more impressive than in the mountains around Erzurum.

Enroute to Horasan the road lead through Pasinler with Hasankale Castle built in 1339, perched atop the hill. 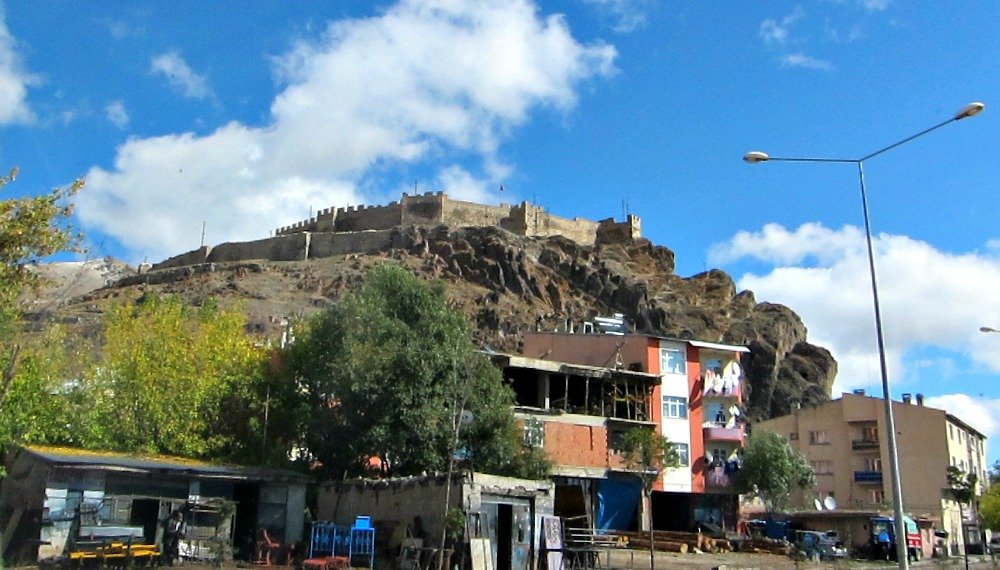 This castle was the birthplace of the Ottoman Turkish Satirical Poet Ömer (pen name Nefí).  His story is quite intriguing.

In 1635 Nefí presented his book of satirical verses to Sultan Murad IV at the Tokapi Palace in Istanbul just as lightning struck the Palace Dome.  He was ordered to be disposed of in order to rid the Palace of the arrows of misfortune.  Nef’i asked the Palace Master, a man of African Origin to appeal on his behalf.  While the Master was writing the appeal a drop of black ink fell on the paper and Nef’i, unable to resist the Satire of the occasion, commented that it must have been a drop of the Master’s blood.

The appeal was torn up on the spot and Nefi’ was strangled by the Executioner, who Nef’i taunted to the end with Go Man you slacker!

And there, right in the middle of town we saw Pasinler’s very own fairy chimneys!

Twenty minutes out of Pasinler we pulled over when we saw an unusual (to us) Ottoman Bridge.

As we approached Horasan, our first Tea Stop for the day, the snow let us know it would be cold.  When I discovered it was 4 degrees C,  I congratulated myself on having packed my red down puffer jacket.

We were a bit of a novelty in Horasan, with girls taking the opportunity to practice English and and men posing for photos.  They grow big cabbages in Turkey and Horasan had some beauties.  Cars that stood in shadows still had the ice from the night on them. 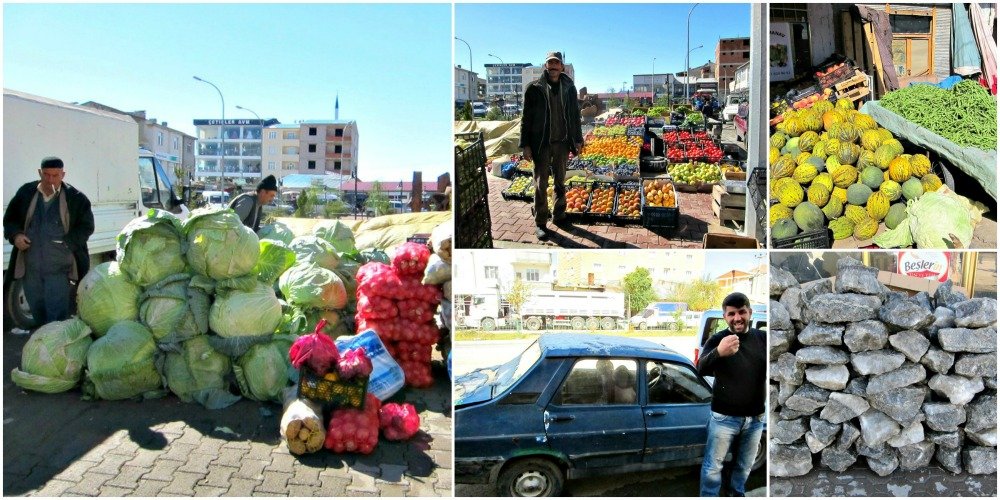 At Horasan we were not even half way to Dogubayazit but as we turned onto the D100 our excitement was building. 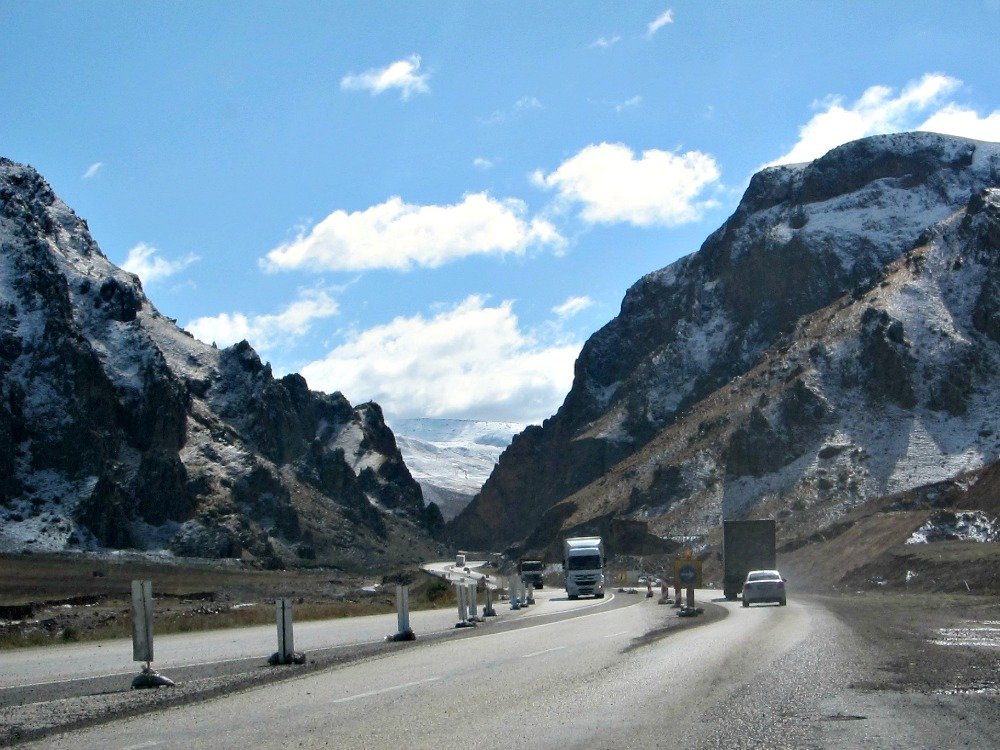 The landscape was the usual study of brown earth, white snow and blue sky, but this patch of green near Güneykaya caught my eye. 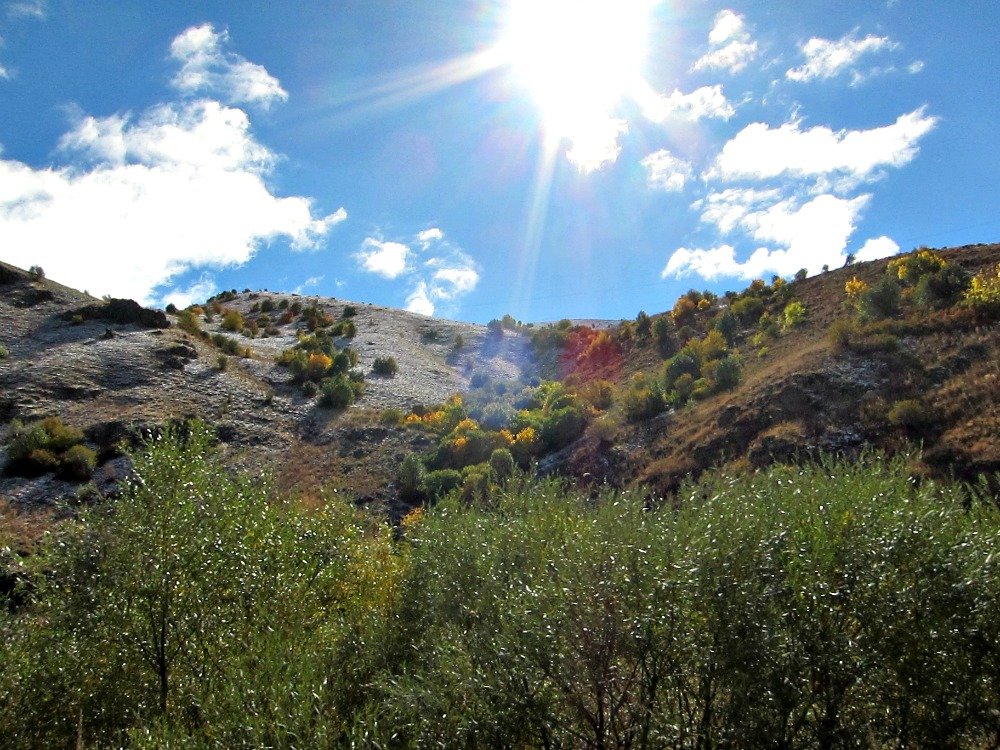 About ten minutes later we passed a busy harvest.  All the trucks we passed were carrying the same thing.  A white/grey root crop – but what was it? 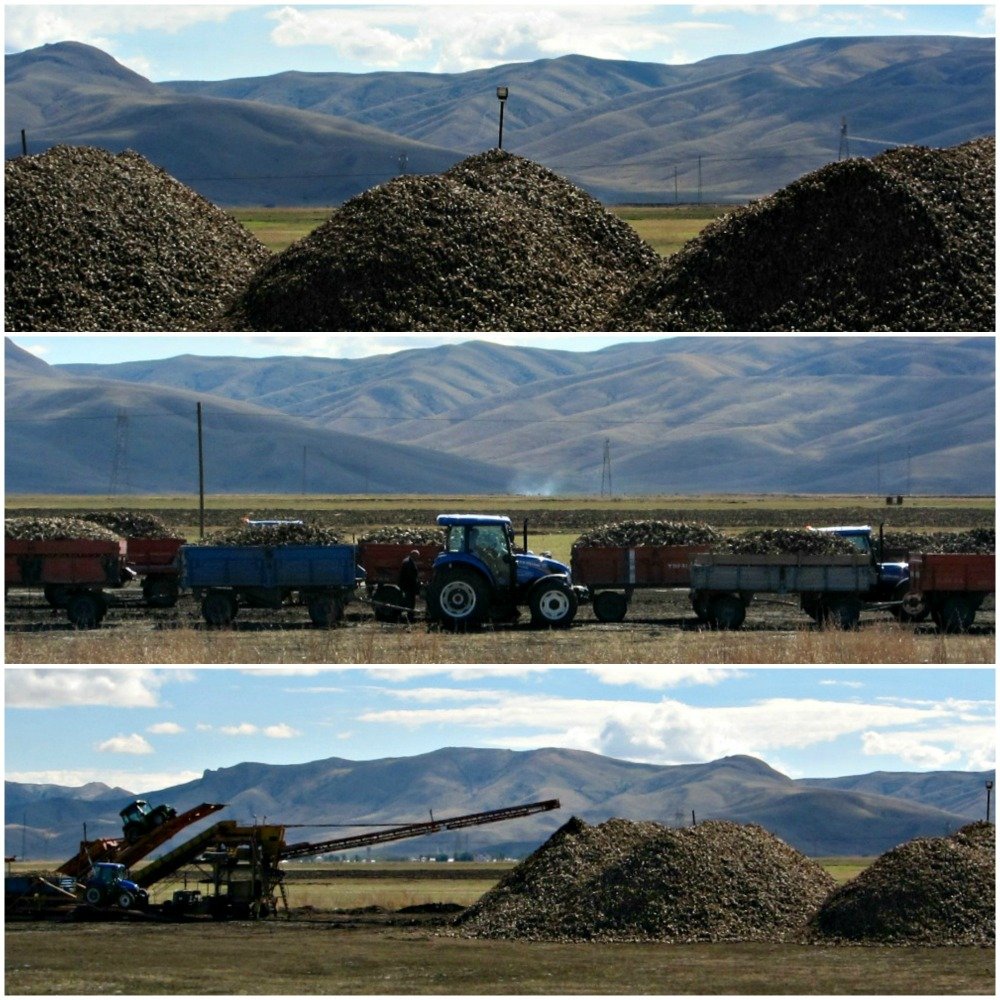 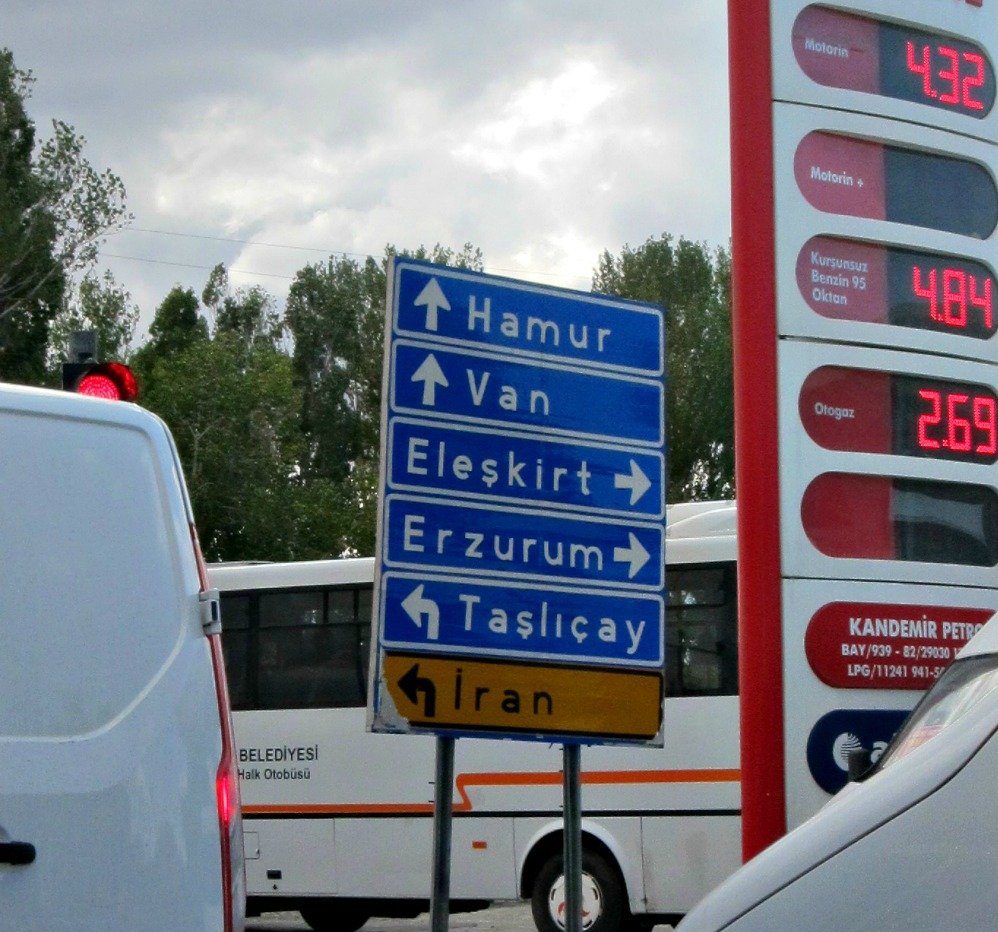 We were once again driving through the smooth brown countryside that I shall always associate with Eastern Turkey.

And we arrived in Dogubayazit on the back of an Eagle.

This post is linked to Travel Photo Thursday at Budget Travelers Sandbox.

The Strangest Food I’ve Eaten While Traveling or a Cup of Pink Pickled Cabbage
Next Post: Tuesday in Townsville or Chinese with a Downpour