The temperature in Luang Prabang during our visit in early April was 42 degrees celsius, so an opportunity to get wet and cool was high on the agenda.

Arrive early to avoid crowds and make sure you have enough time to do the walk to the top of the falls. Four hours is a reasonable amount of time at Kuang Si waterfall. If it’s photos you are after take photos first before a lot of people arrive. Work your way to the top falls taking photos as you go, then relax and swim. You can grab something to eat from the stalls outside when you leave.

These photos were taken in late dry season.

The walk to the top of the falls does become impassable in the wet season. 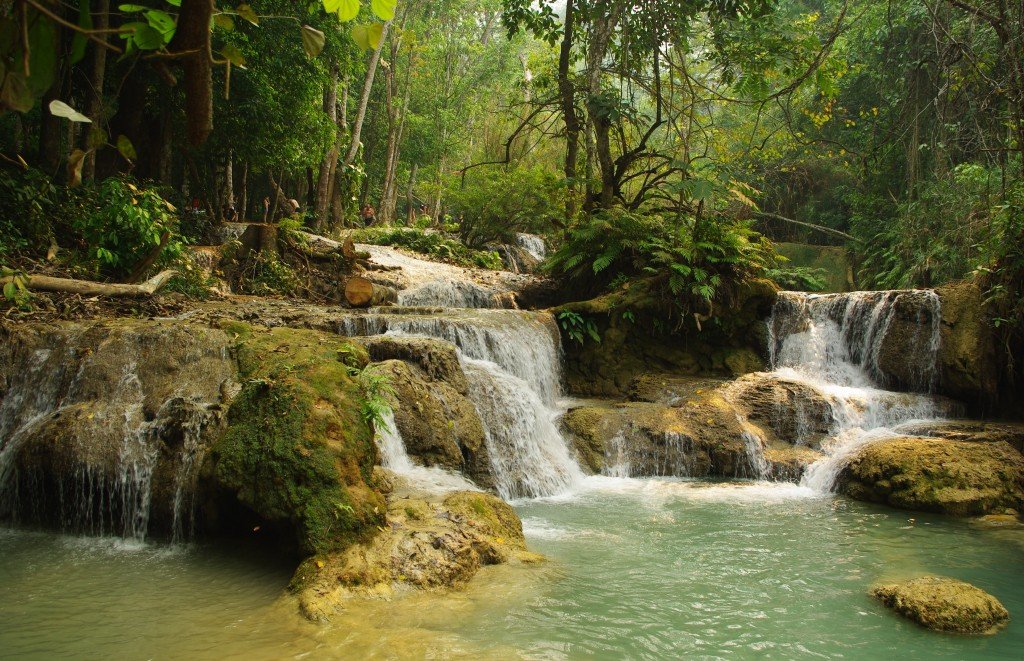 The pools are framed by lush green trees, ferns and clambering vines and there is even a rope to swing on Tarzan style.

Some pools are not accessible for swimming. 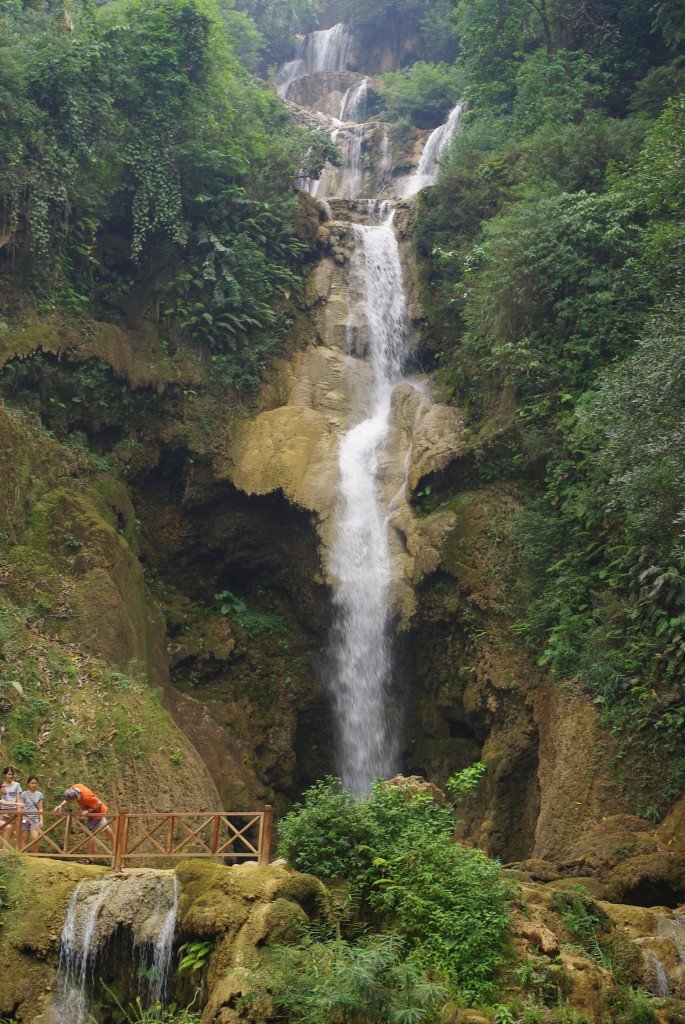 Travellers weren’t the only ones looking forward to a swim. The local population, including the Luang Prabang monks and visiting monks, love it here too. 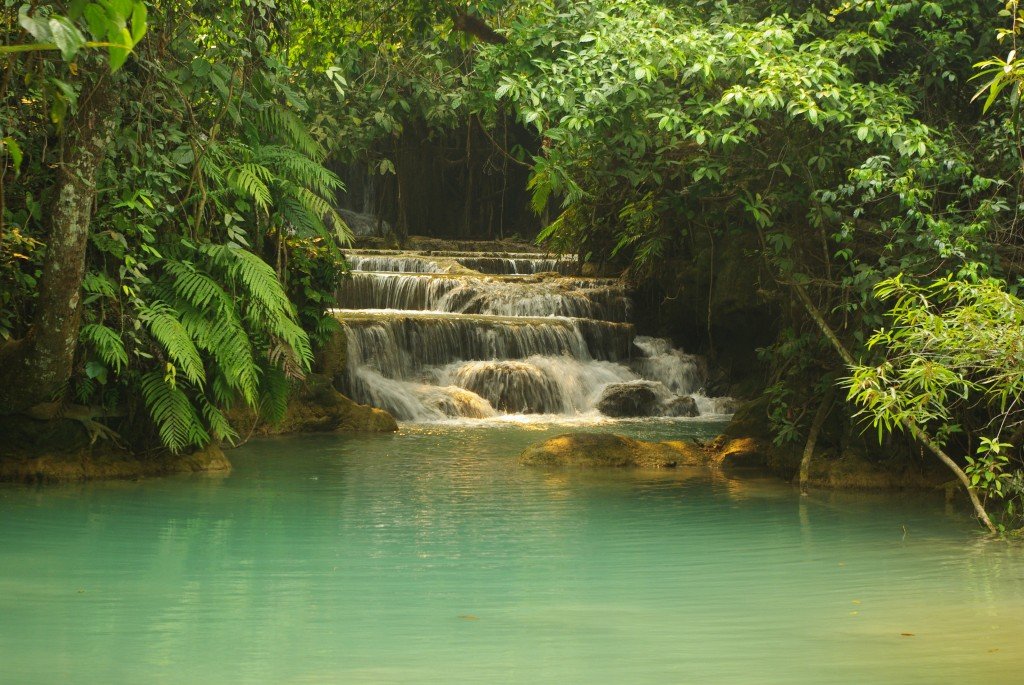 An added bonus of visiting Kuang Si, is the opportunity to see rescued moon bears on the Free the Bears Bear Discovery Trail.

Free the bears a charity set up by Australian Mary Hutton in 1993 saves Sun Bears and Moon Bears.

The bears here at Kuang Si are Moon Bears. 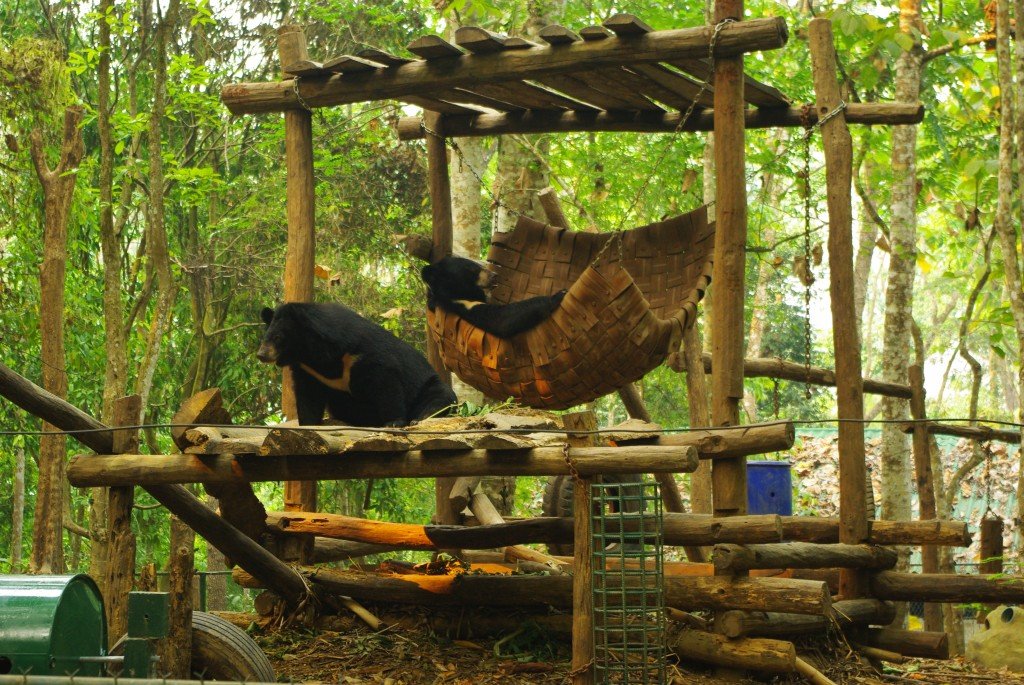 Although 20,000 kip is charged to enter the park, none of this money goes toward the free the bears charity.

Due to the generosity of patrons in the past the enclosures for rescued bears have increased dramatically.

You can donate on the above link and/or buy from a range of gifts with the money going directly to helping the bears. 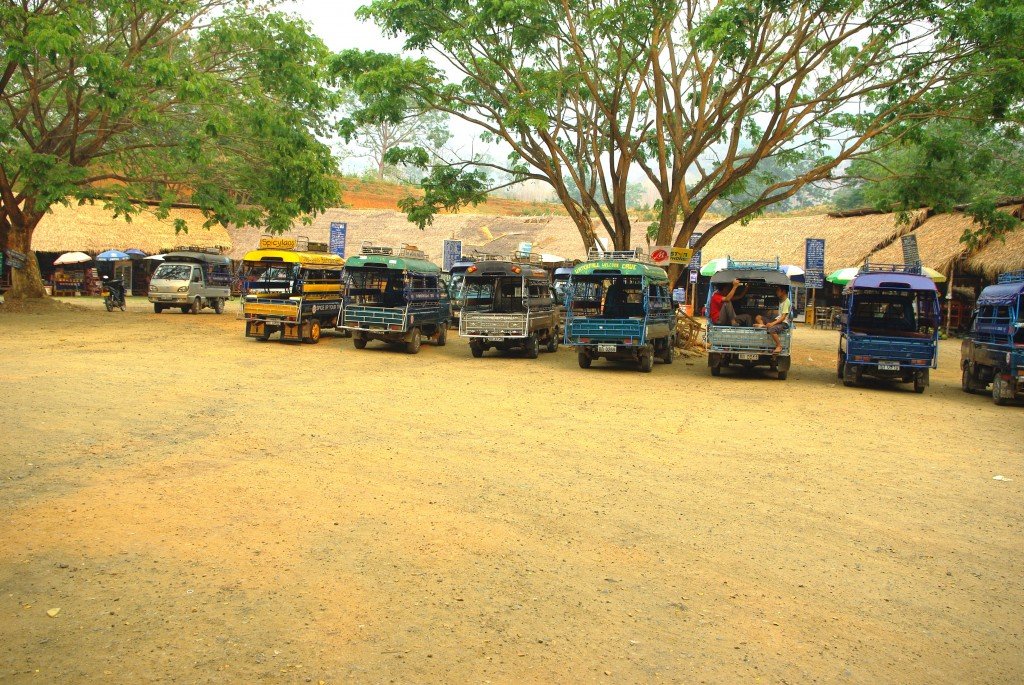 Tuk tuks waiting for the return of their passengers.

Look for distinguishing characteristics so you can find your tuk tuk and driver on your return.

Drivers do not enter the waterfall area. 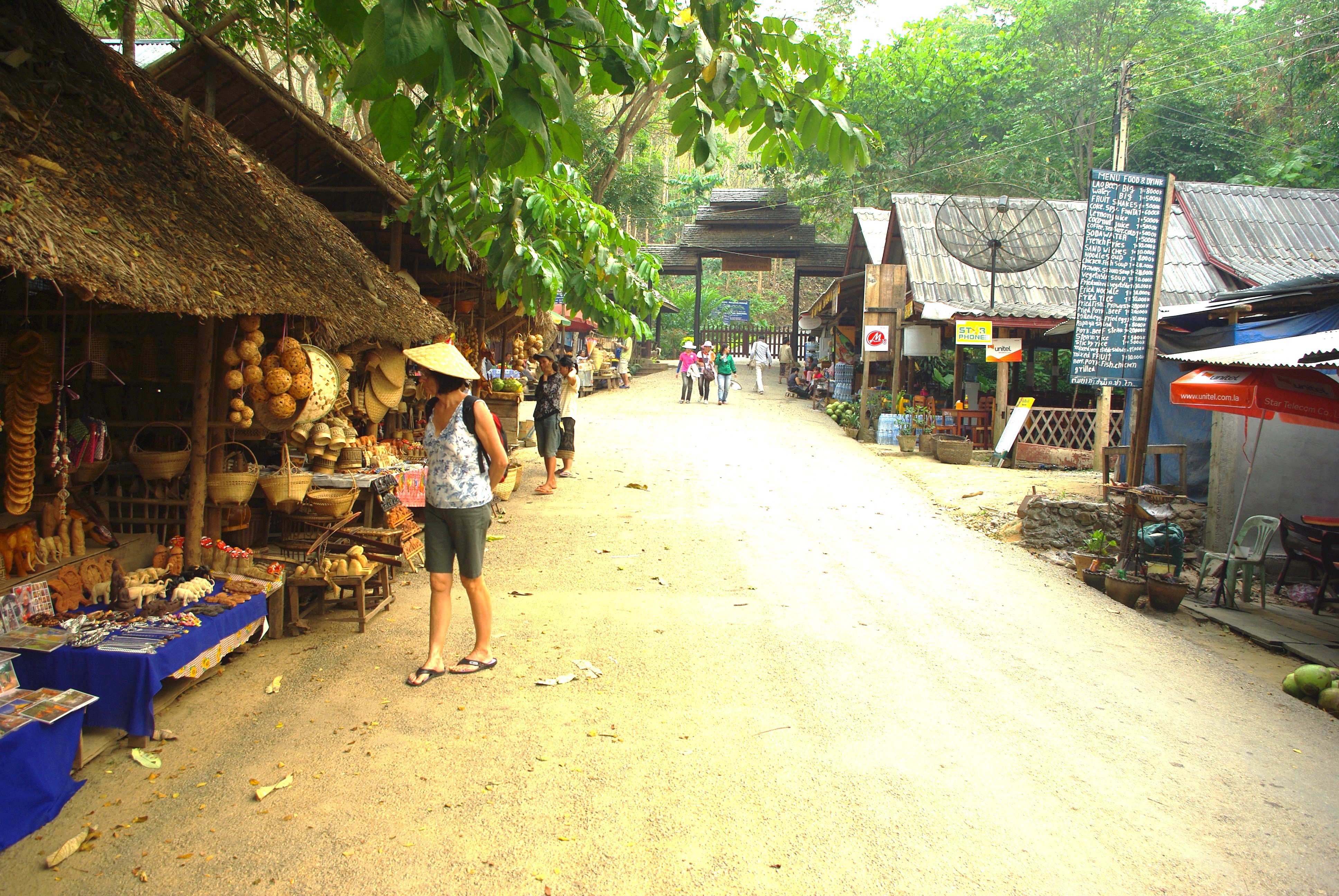 There were plenty of food and drink stalls outside the gates. 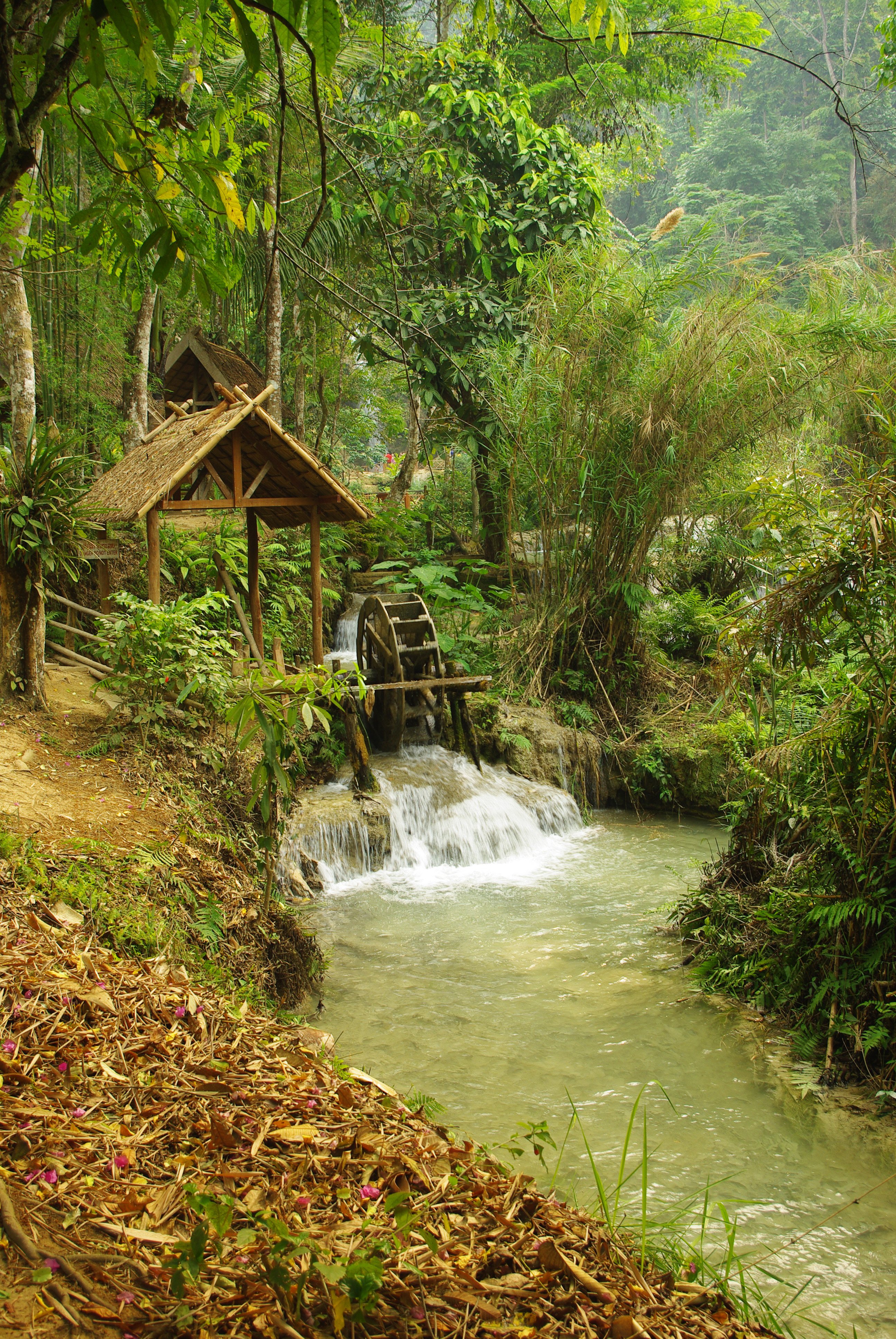 This water wheel, which is supposedly used to remove the husks from rice, added charm to the already picture perfect setting. 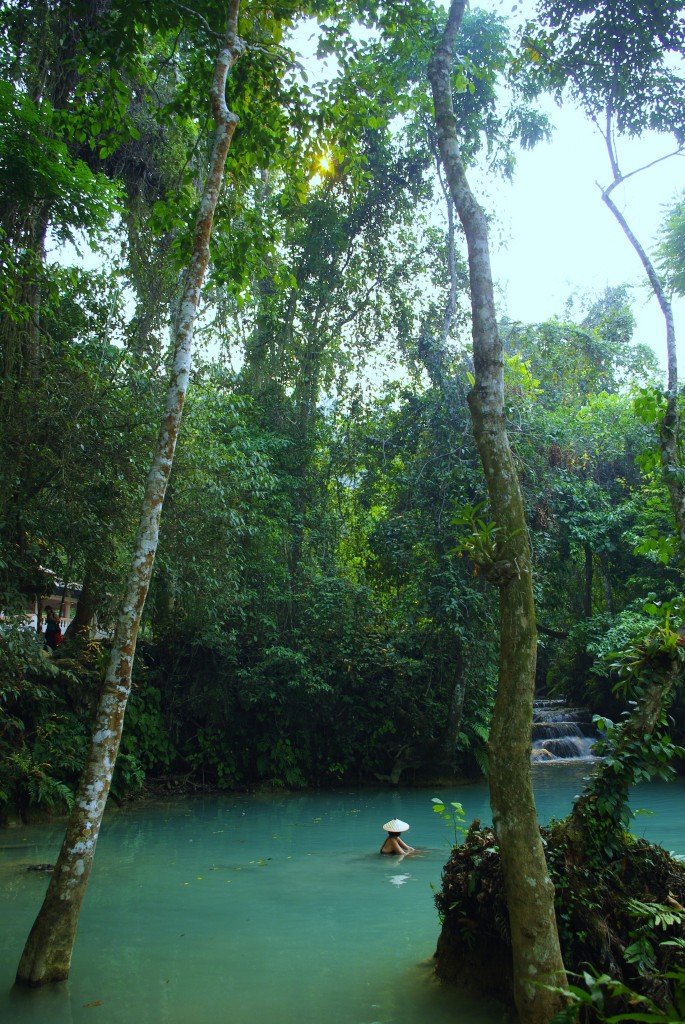 How to get to Kuang Si Waterfall

Hire a Tuk Tuk on the street anywhere in Luang Prabang.

Kuang Si waterfall is a refreshing destination on a hot day in Luang Prabang. Consider hiring a Songtaew or Tuk Tuk for the whole day so you can stay as long as you like. Expect to pay 250,000 kip of $40 AUD for the whole day.

Alternatively you can book a shared mini bus here.

How long does it take to get to Kuang Si Waterfall

Kuang Si is about 45 minutes/1 hour from Luang Prabang. It’s a relatively relaxing country drive beside rice paddies and small dusty towns and villages. Remember it was dry season during our village, but all the time in the background were greener mountains.

Add Kuang Si waterfall to your Laos Itinerary and you will not be sorry for one minute. It is one of the best things to do in Luang Prabang.

Whitsundays on a Budget – What to do in Airlie Beach beyond Whitsunday Islands
Next Post: A day in the Sunshine Coast Hinterland – Road Trips from Brisbane