On the southern side of Ancient Troad or the modern Biga Peninsula in North Eastern Turkey, is the once Greek Settlement of Assos.  The Temple to Athena built in 530BC presides over the hilltop, while downhill beneath the 2nd Century BC Theatre, lies the old port.

Old stone warehouses, reborn as hotels and restaurants, cluster charmingly around an intimate port.  They say that any week-end April to August is crowded here, yet in early September it was anything but.

There are several names thrown around when referring to the town and port at Assos.

Confused? I know I was.  Time for a little research.

“The Twin villages of Behramkale and Assos are a breathtaking double Act.”

It goes on to describe the ancient Greek Temple of Athena at the top of the hill (Behramkale) and the stone buildings of the port at the bottom of the hill (Assos).

But this was at odds with Widipedia.

The town on top of the hill is called Assos/Behramkale/Behram and the port below is called Iskele meaning port.

They went on to say that the ancient town was called Assos then renamed Behramkale.

Hmmm.  We need a third opinion.

Iskele – the Port below the town of Assos (otherwise known as Behramkale or Behram for short). 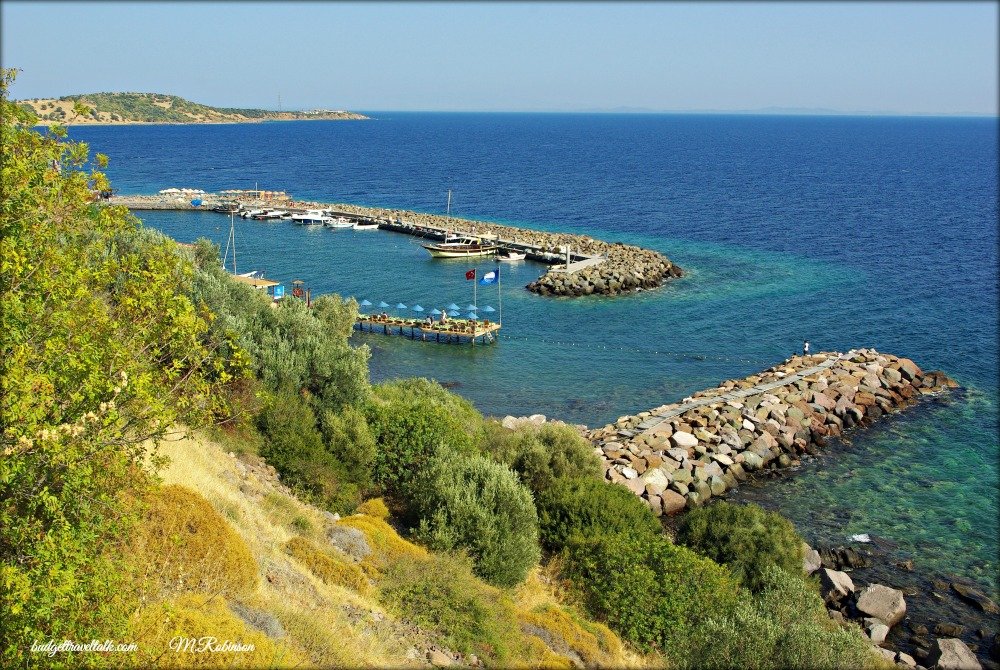 Arriving late in the day meant bypassing the hilltop town of Assos and taking the dramatically steep road to down to Iskele.  If I was braver you would now be looking at a video of that descent.  Thank heavens it wasn’t as long as it was steep and that even at my age closing my eyes works well.

Dr. No’s Pansiyon was a budget affair tucked away behind the smarter waterfront hotels… we did however have one tiny window with it’s own tiny sea view. The stone courtyard that filled the gap between room and hill was lined with white boxes growing herbs, while overhead hung sturdy bunches of grapes. A stone staircase led down through a profusion of flower boxes and more vines to port level. 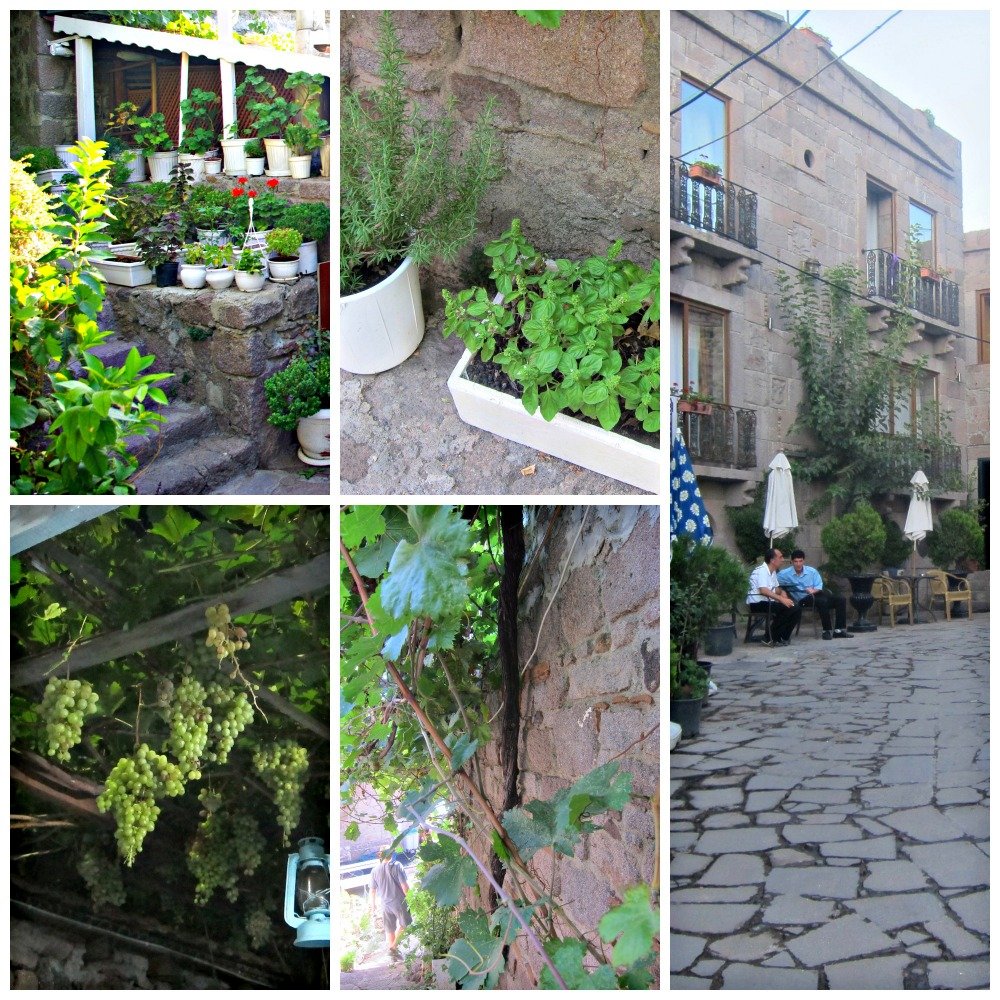 Walking port side through the restaurant and bar strip, we came to several timber swimming platforms. 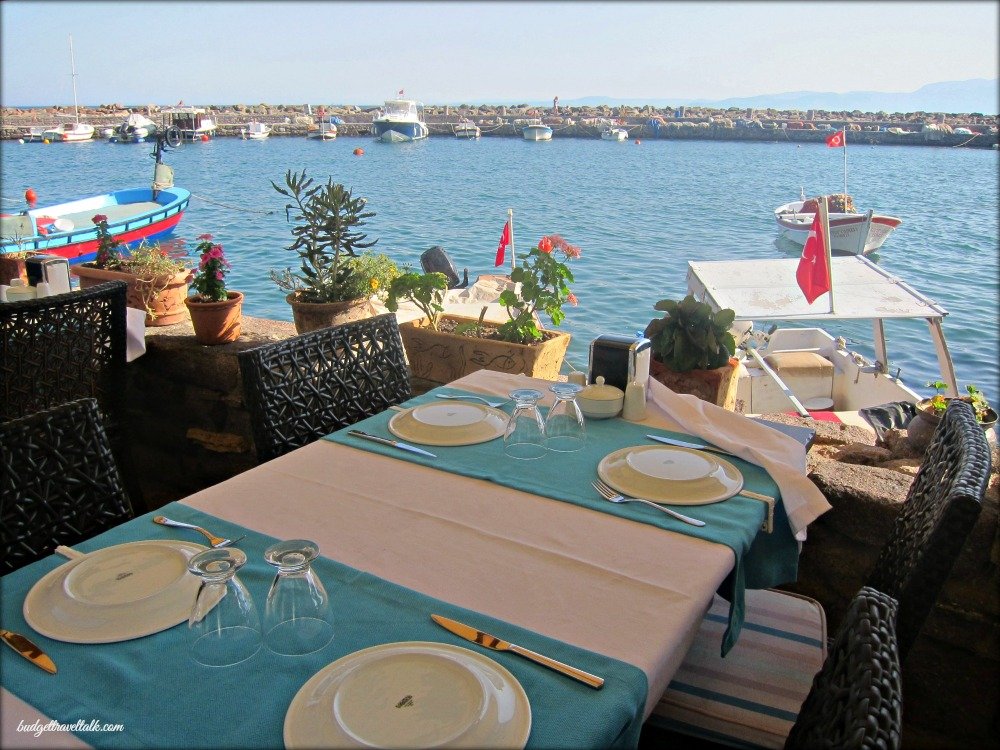 Having no idea what platforms belonged to what hotels, we slid uneasily onto the first sun lounges we saw and nonchalantly applied sunscreen.  No Problemo.

Time for a swim.

Out of frame on the left where the water was very deep was the place to enter.  Marty dive bombed and I climbed the ladder down a bit before jumping.  That water was deliciously refreshing – not cold – and very buoyant. 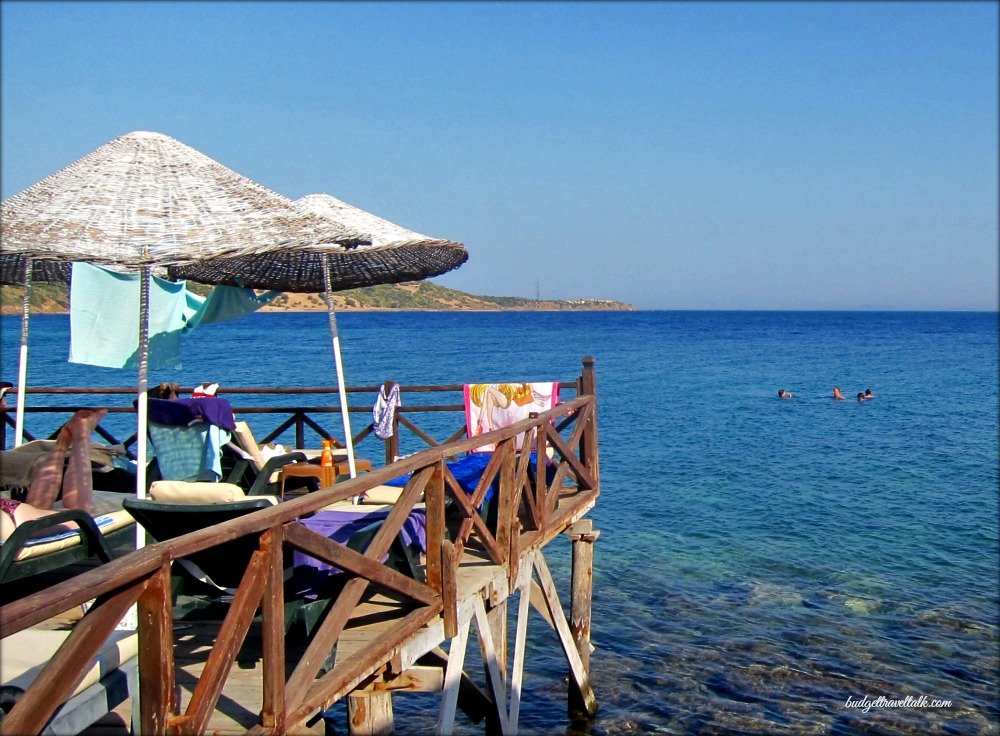 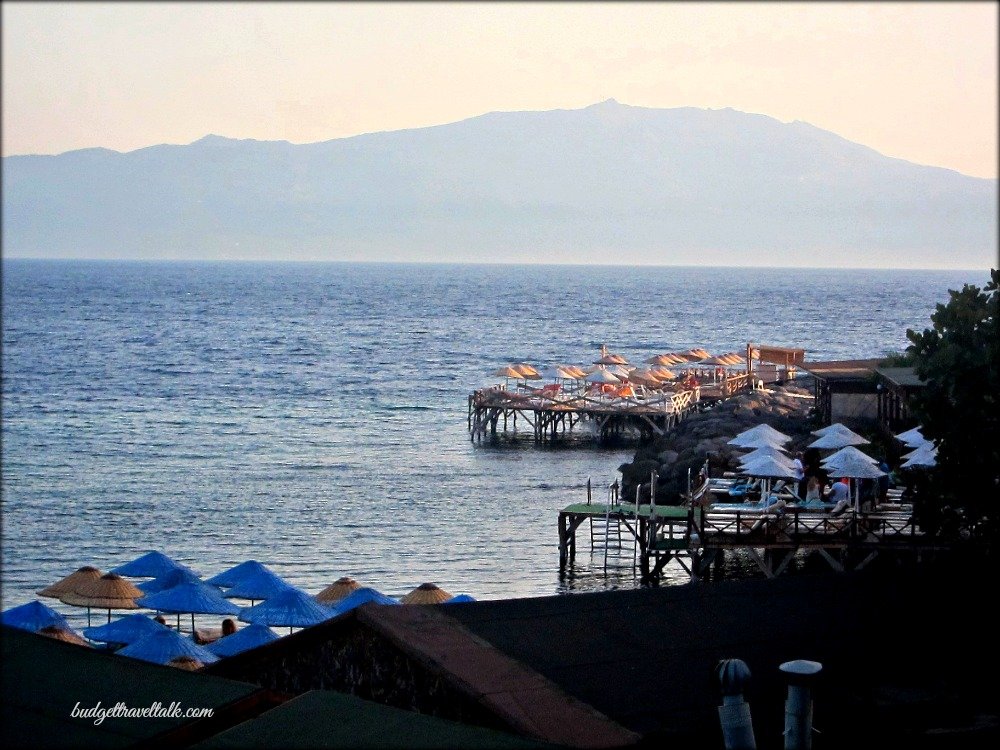 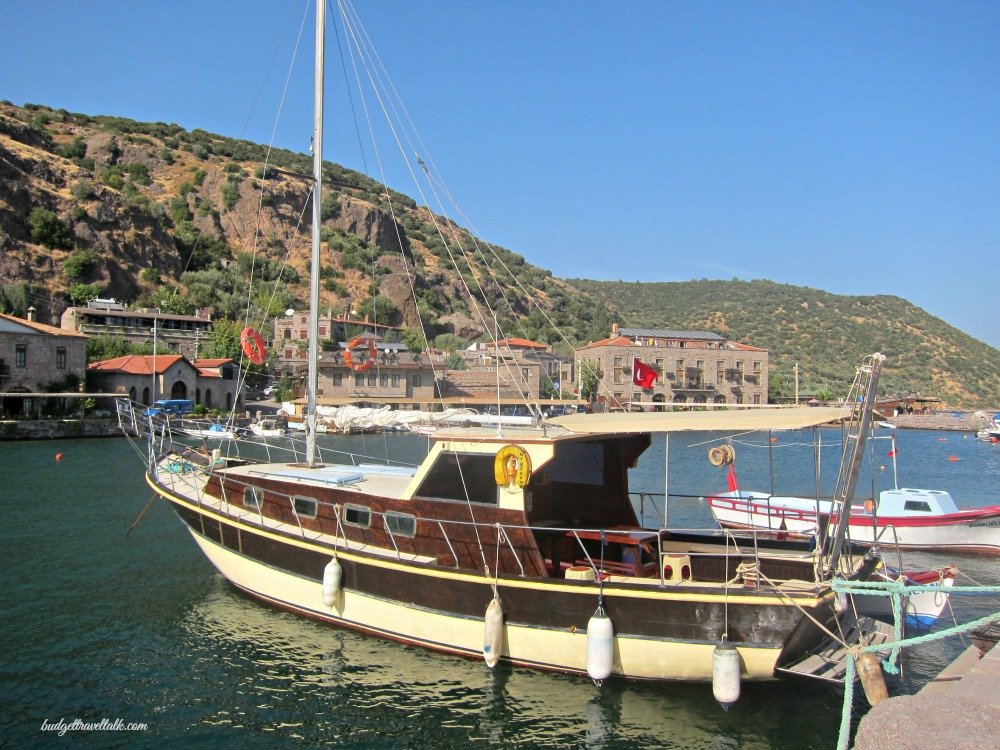 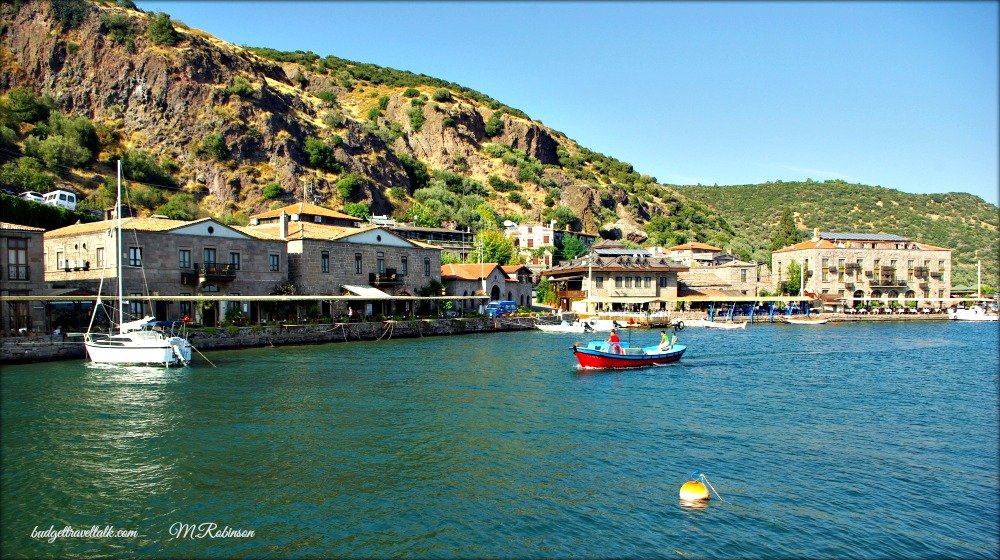 Leaving Iskele early the next morning we stopped at the entrance to the Theatre which lay further down the hill to the south, away from the Temple of Athena.

The Roman Theatre viewed from below.  Late 2nd Century BC. Can you find me? 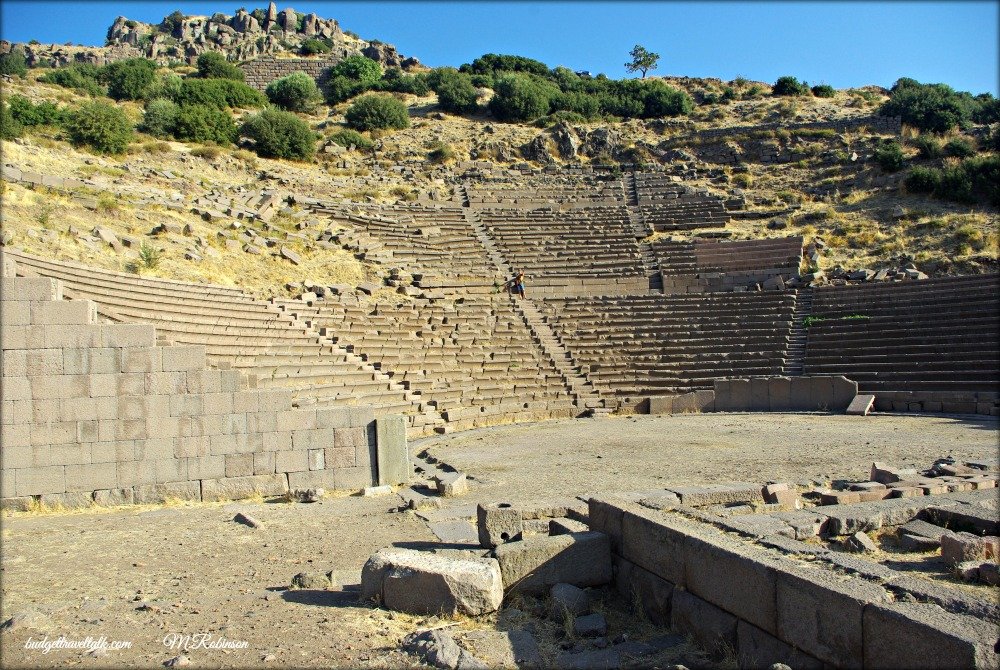 The View from my vantage point was all stone and blue and Marty. 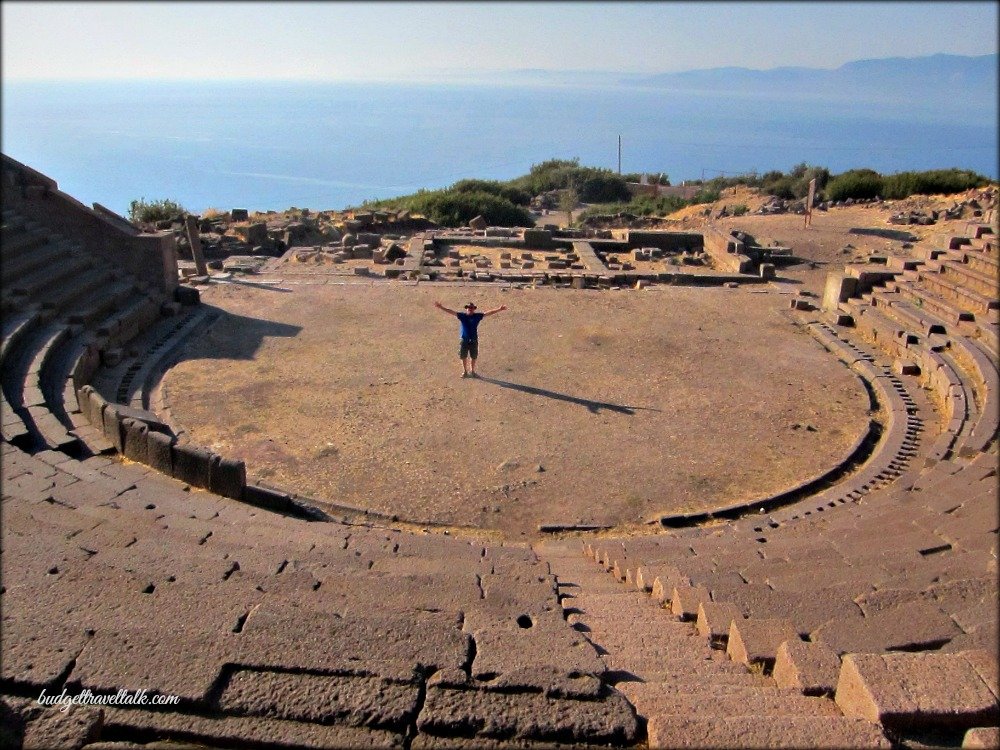 The entrance to the Temple of Athena is reached via the township of Assos further up the hill, where stalls selling local handicrafts lined the way.

Say hello to the Turkeys. 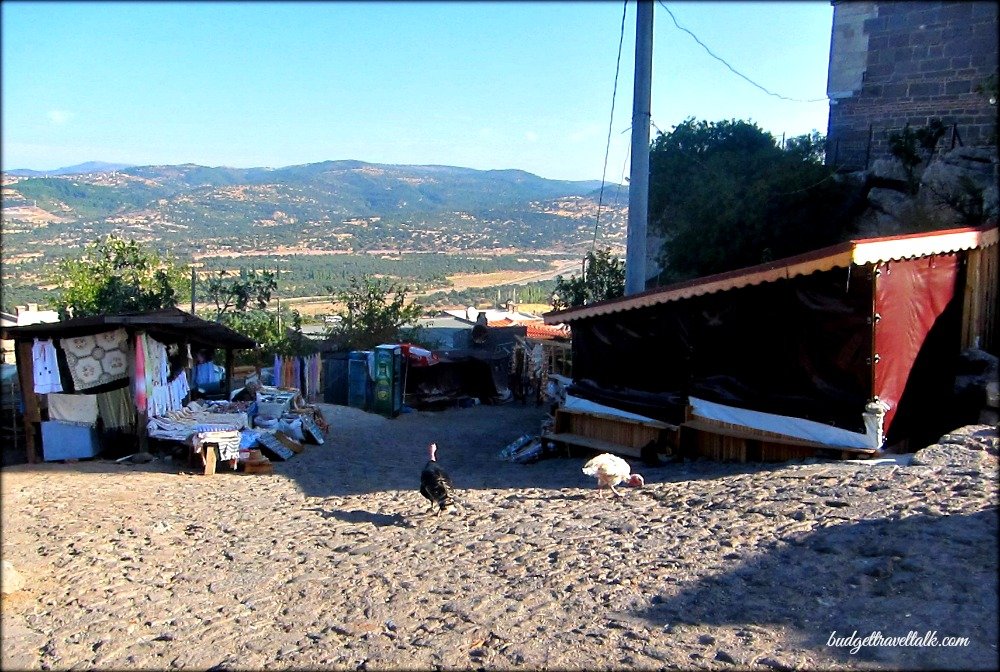 I will never forget the ethereal quality of that summit view. The early morning blues of Sea and Sky provided an amazing backdrop and I bet sunset would be equally as stunning. 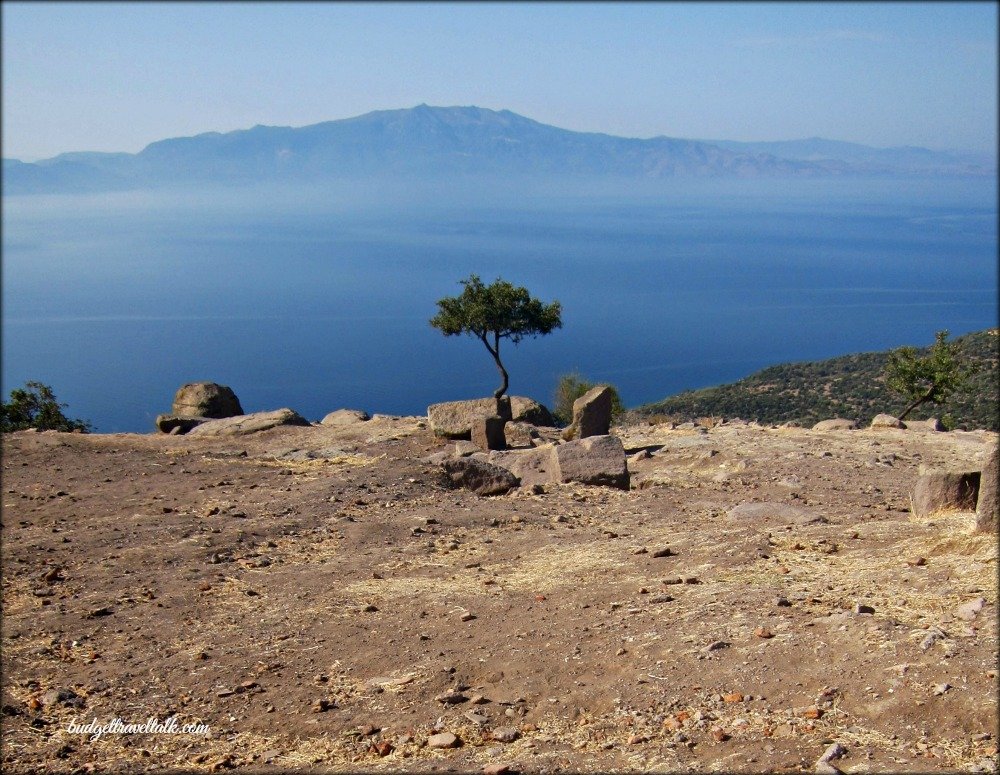 I remember thinking what an amazing sight the intact temple would have made on it’s hilltop. 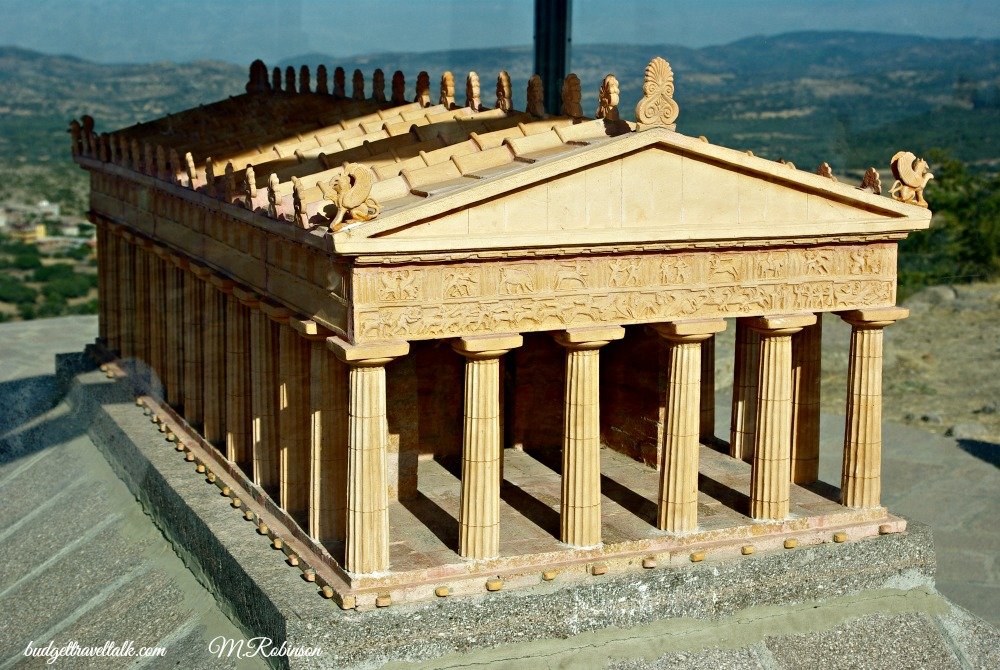 238m above sea level the Doric Temple to Athena presides over Assos (Behramkale or Behram) and the Agean.  Six of the original 38 columns remain. 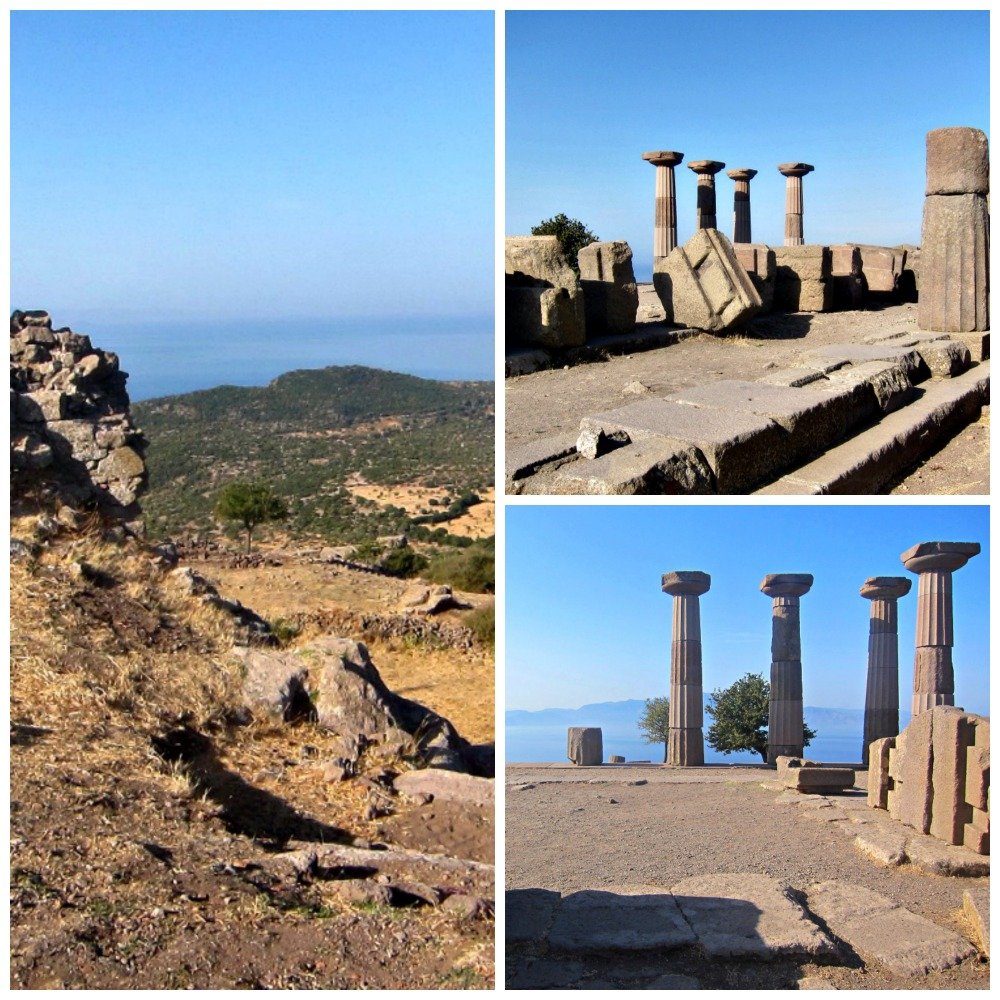 Turkey could be thought of as a giant open air Museum and the variety of sites in different stages of ruin and restoration is amazing.  This site was the first we came across on a week’s self drive journey from Izmir to Gallipoli, and it did not disappoint.  Like Pamukkale and Hierapolis inland from Izmir, Assos and Iskele make a tantalising combination.  The old town and antiquities spread over the hill and below the relaxing ambience and playground of Iskele.

This week I have linked to:

CORINNE AND JIM FROM REFLECTIONS ENROUTE Which is all about Turkey this week.

Short Breaks like a Wongaling Beach Mini-Break can be a life saver
Next Post: Bozcaada the Barren