35 minutes from Geyikli, below the Dardanelles on the west Coast of Turkey,  lies Bozcaada Island – literally the Barren Island. 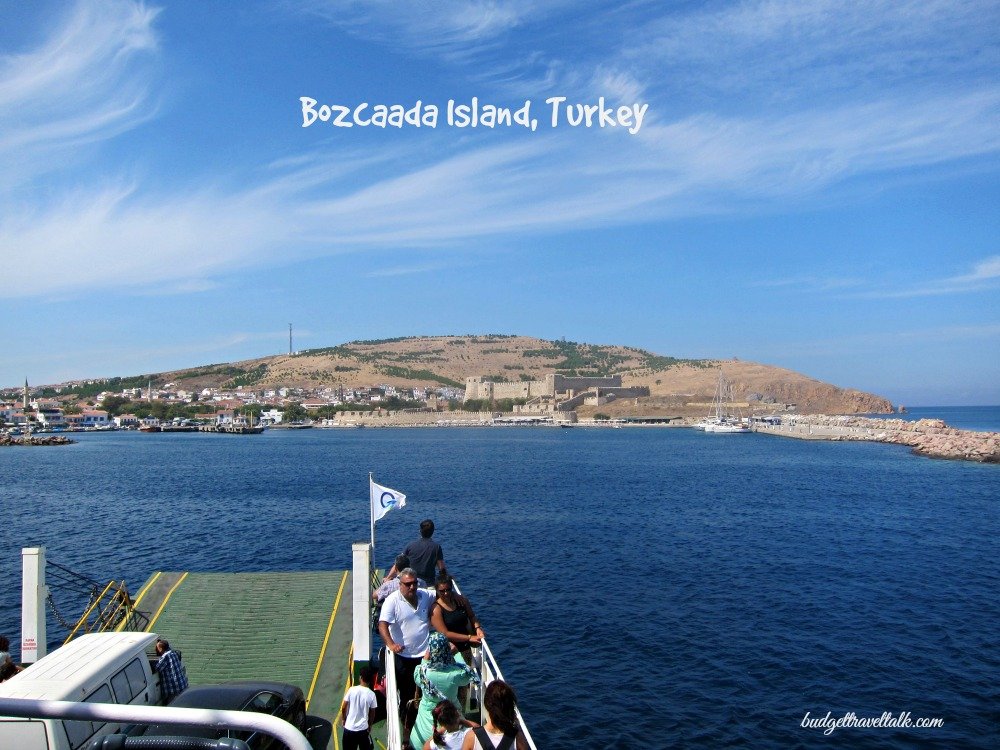 We had visited Cunda Island 130km to the south the previous day, but being connected via causeway to the mainland it lacked true Island status.

Bozcaada on the other hand stood alone, approachable only by ferry from Geyikli or seaplane from Istanbul.   In a rare burst of timeliness we arrived at Geyikli at 12 noon just before the ferry sailed – on we drove and the ferry departed.

The top deck looked like the perfect place to both get some fresh air and watch the island approach, and it was.  Apart from the toilet on the windward side from which the most disgusting smell came in gusts.  People were giggling, gasping or turning a blind  nose.  Who knew we would pay a price for that lucky timing…

Smells aside, it was a pleasant trip to the island of Wine Makers, Fishermen and Poppy Syrup Chefs – oh and add Tomato Jam makers to that too!

We had timed this visit to coincide with the yearly wine festival on the 14th September 2013, but saw no sign of it.  We supposed it had been put on hold because of new laws prohibiting drinking alcohol in public places, although we did see an advertisement in a window.

The enforced population swap of the Treaty of Lausanne in 1923, was not forced on the Greeks of Bozcaada, as it had been on those in AYVALIK and CUNDA ISLAND.  The Greeks on Bozcaada finally left of their own accord in the late 60’s early 70’s to find better opportunities and less discrimination elsewhere.  The resulting population void was filled by Turkish people from a mainland district to the east – Bayramic.

Bozcaada has been invaded and conquered, burned and rebuilt, all due to it’s pivotal position at the mouth of the Dardanelles, the narrow channel that controls the shipping for all countries east as far as the Black Sea and Russia.

The Fortress that loomed bigger and bigger as the island got closer had been destroyed and rebuilt many times and as a result is thought to be the best preserved fortress in Turkey. It’s current form dates from Mehmet the Conquerer’s time, the last rebuild being in 1815.

Approaching the Port and Bozcaada Fortress.  The white buildings behind the fortress are on the Greek side of town. 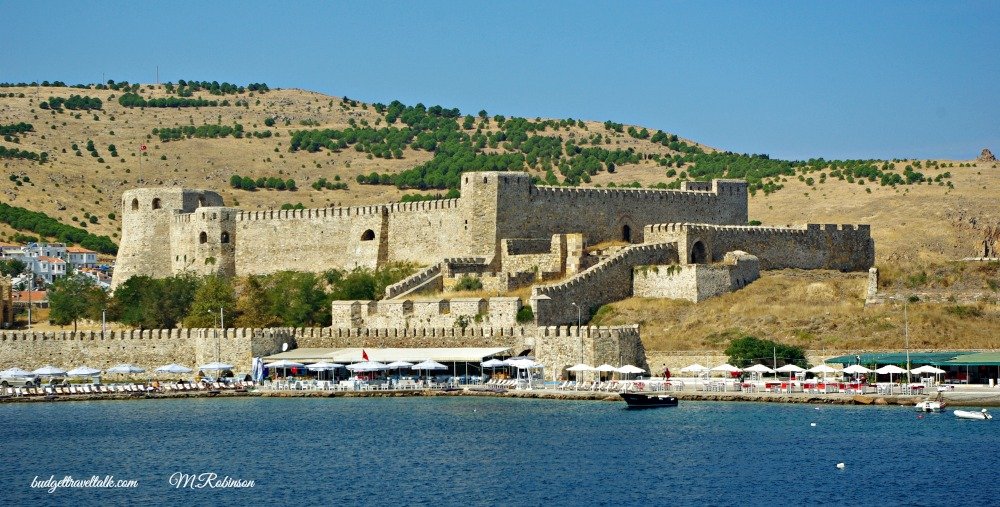 Leaving the ferry, we parked and wandered into a large open air eating area beneath trees on the left, where we had the best chicken doners (sliced grilled chicken and salad on a breadroll).  While eating we browsed our Guidebook – discussing Ergin Pansiyon.  Next minute a man from the next table turned and smiled at us.

I own Ergin and can take you there after lunch if you like.

Oh the randomness of travel in Turkey.

I can’t swear to which Ergin we went (there were four), but we walked to the right and only a few streets up the hill behind the fortress.  The pansiyon was quite possibly empty apart from ourselves and we enjoyed superb happy hour views from the rooftop where a mother and daughter homework session was underway. Isn’t it reassuring how some things are the same allover the world? 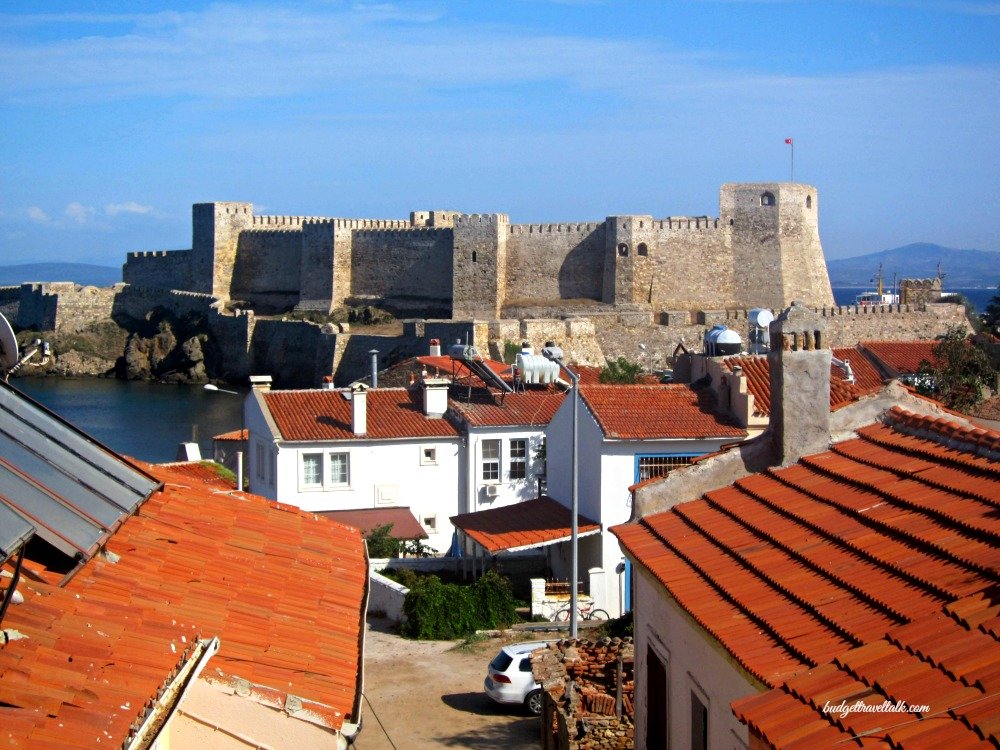 Our neighbours down on street level were a friendly lot and the next morning some village ladies fed us in a separate courtyard up the street.  One of them took the money for our night’s accommodation – it was all seemed very communal and laid back. 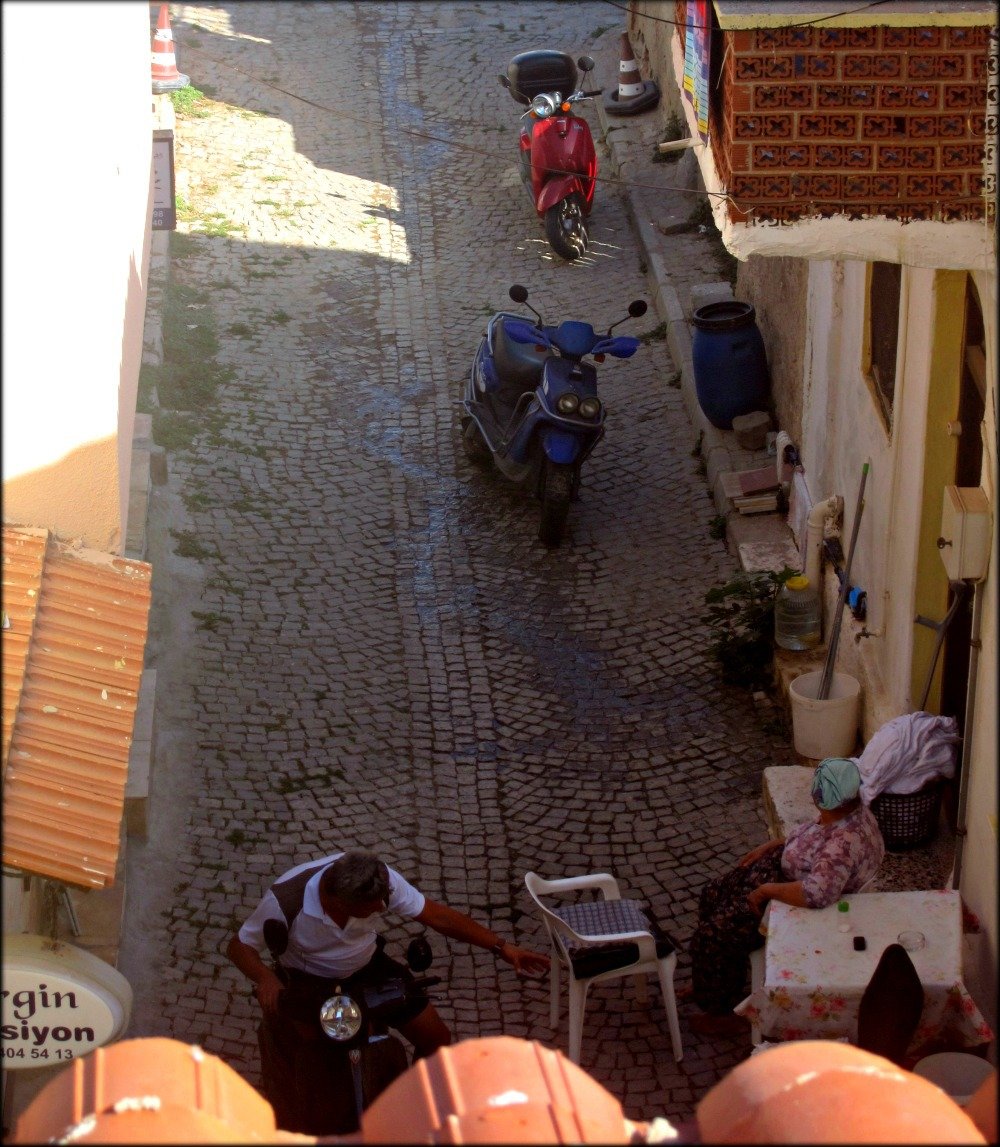 Island life is all about being removed physically from the mundane life of the mainland, and that is the attraction at Bozcaada.  There is nothing startling to see, just the fortress which can after all be seen remarkably well from the ferry although it evidently opens to reveal some interesting artifacts.  Apart from that there is the old church with bell tower and two Mosques (1655 and 1700).

After seeing them it’s time to relax – buy an ice-cream, open a bottle of wine, order some octopus or lay on a beach.  Swimming is best away from the main port area at any of the sandy inlets around the island. Buses leave hourly.

Cobblestones reign supreme in the town around the port and this particular lane leads to the Greek Orthodox Church with four storey bell and watch tower dating from 1869 in it’s current form – the tower being restored in 2009. The church is usually closed apart from Sunday Morning Mass 8 a.m. 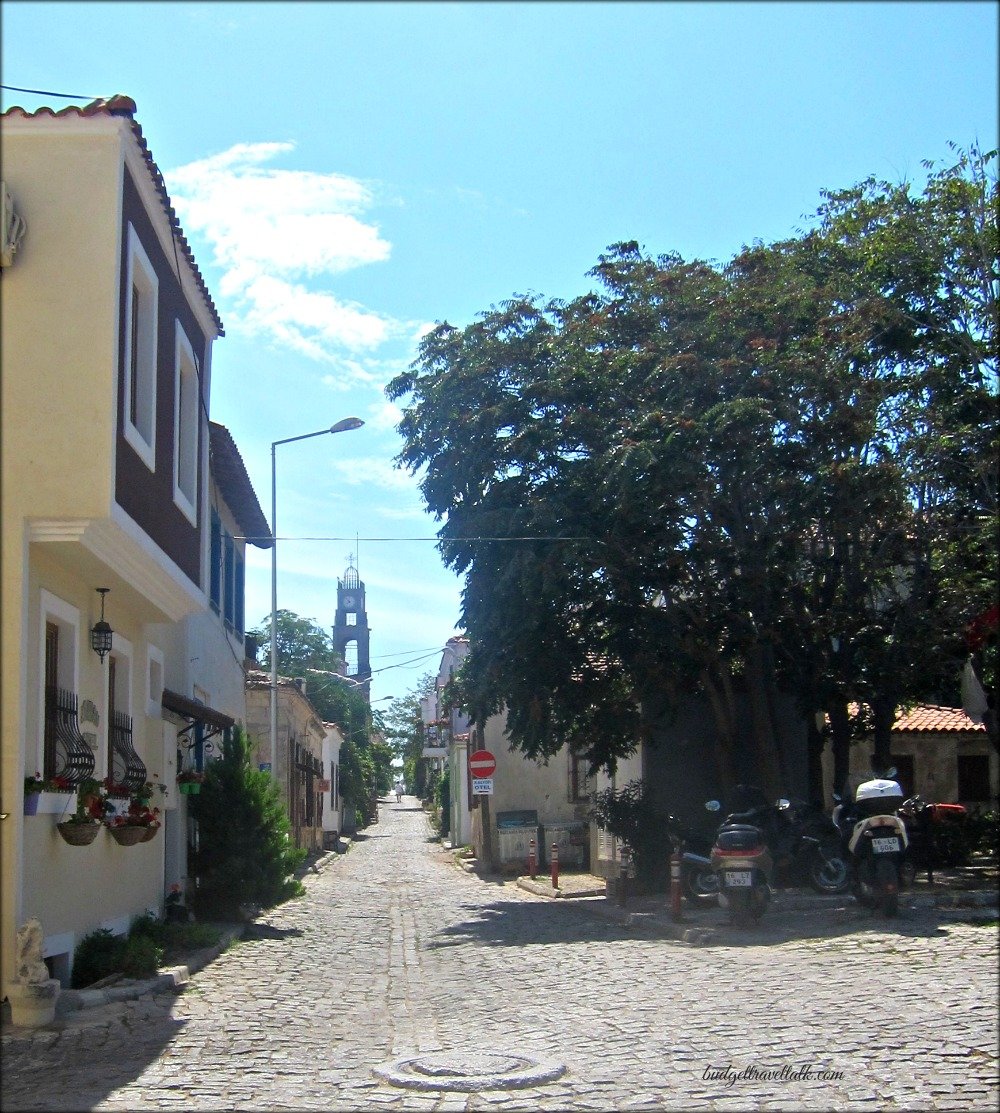 After a welcome shower it was time for a clockwise spin around the island.

Can you see the cars lining the inlet below? A popular swimming spot – but there were just as many lonely coves for a private swim. 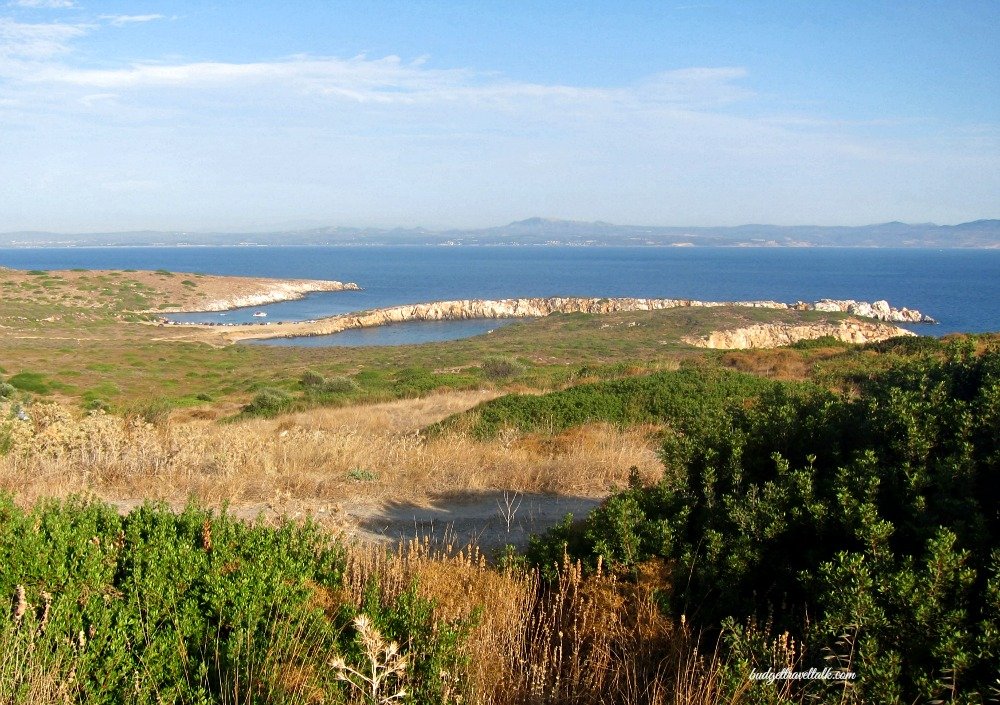 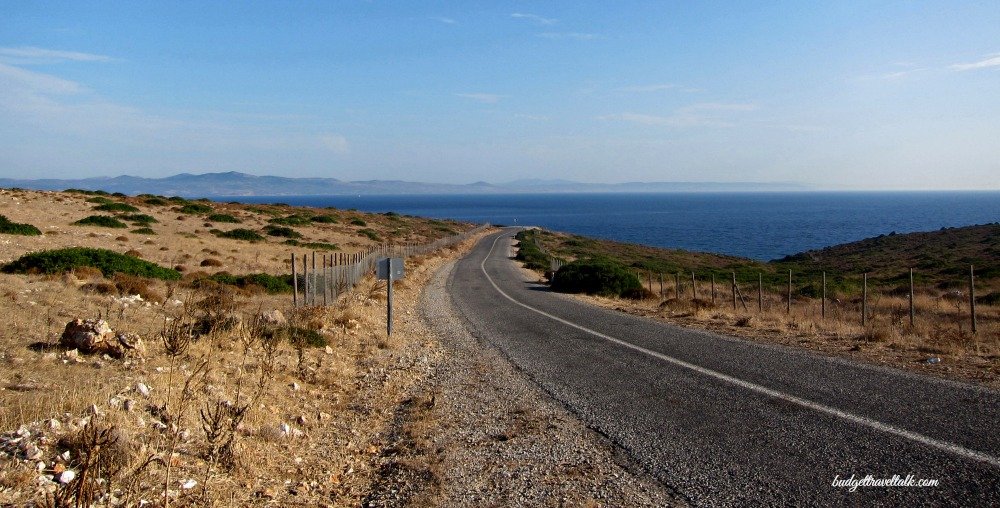 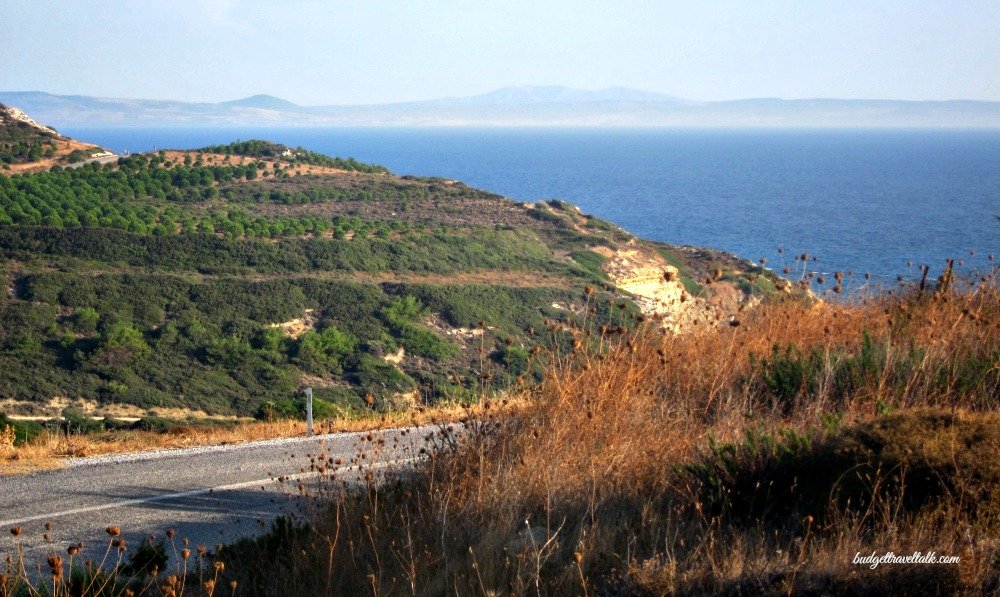 At the end of an atmospheric pine forest drive we arrived like Alice through the looking glass at a wind-farm at the far end of the island. 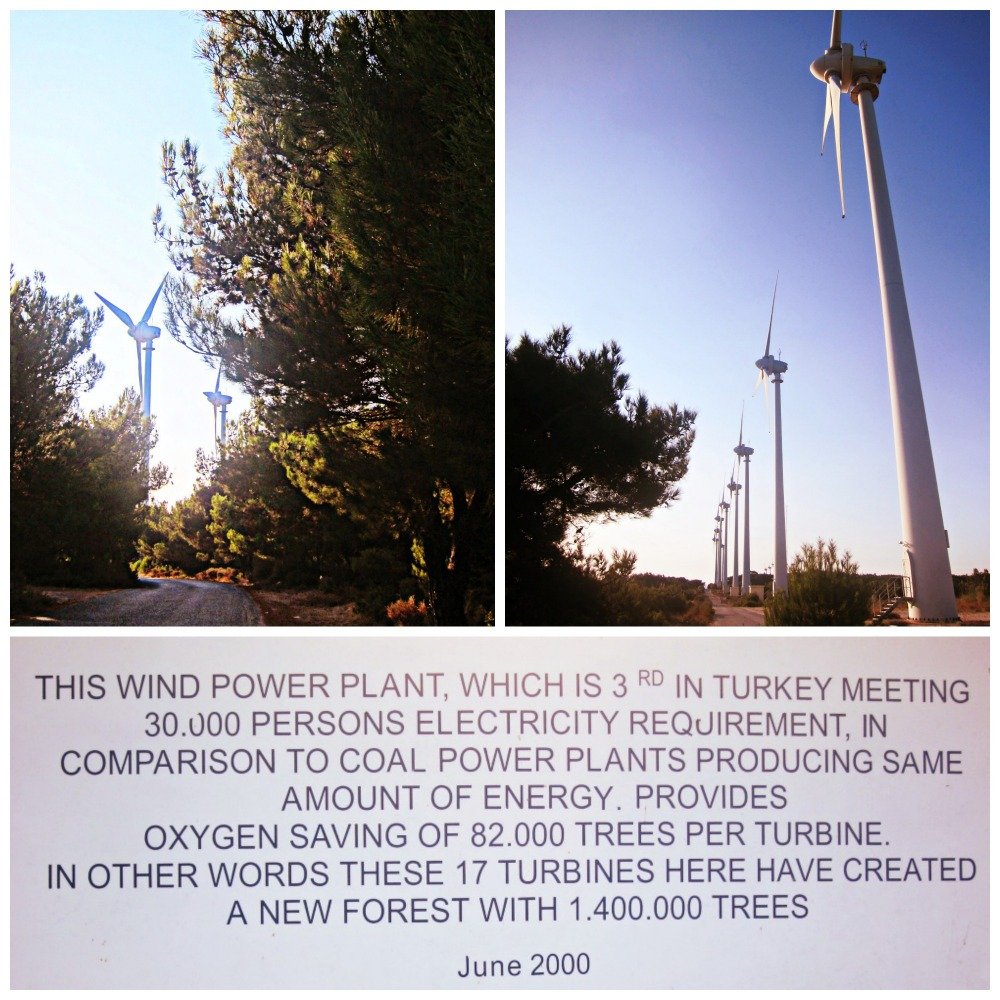 Time to step back through and venture into some wine country.

On the way home.

Brown was the predominant colour of the island, but with splashes of dark green from the pines and vines and the all-around blue from the Agean, the island was anything but what it’s name suggests.

Our jaunt around the island took less than an hour including stops, but now it was time to look for a favourite cafe for refreshments.  In the streets on the left just behind the harbour and beneath another huge tree we found it.

Despite some beautiful colours, the ambience shone through best using Black and White photography. 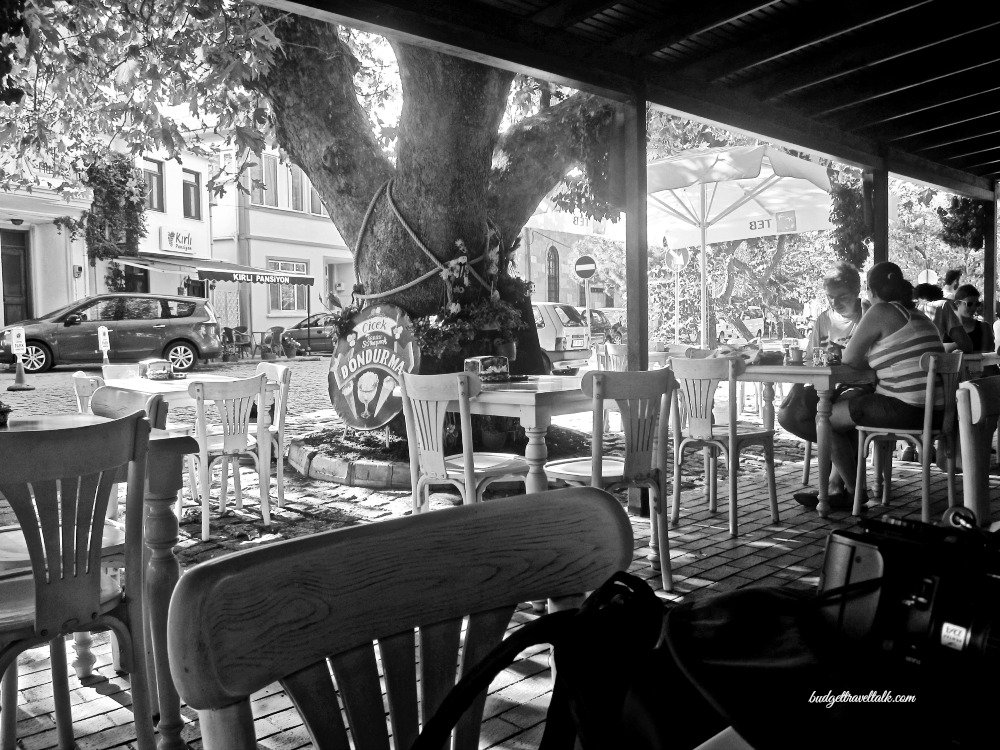 There is more of Bozcaada to share yet – views of the port and dinner in the traditional Greek area – so join me next time.

While looking at Google Maps I realized that Bozcaada Island and Geyikli were on the same longitude as KARS, a world away on the eastern side of Turkey and it reminded me what a crazy diverse country Turkey is.

While you are here click on Nancie’s Travel Photo Thursday at Budget Travelers Sandbox – you never know where you will end up.

The prices of the different Ergin Pansiyons vary.  We paid 120tl per night double with breakfast.

Bozcaada Fortress/Castle.  Entrance approx. 2tl.  Enquire at the tourist info booth on the right when leaving the ferry.

Geyikli is the only ferry service that takes vehicles to Bozcaada.  A passenger ferry operates several times each week from Cannakale.

Assos and Iskele a Turkish Greek City and Port
Next Post: Visit Townsville in Springtime