Ayvalik on the North Agean Coast of Turkey was once an Ottoman Greek Town.

After the Turkish War of Independence and an agreement in 1923, a Population Swap based on religious identity was implemented between Turkey and Greece. The remaining residents of Ayvalik (Ayvali) and their properties were exchanged with Turkish Muslims raised and living in Greece.
[pinit] 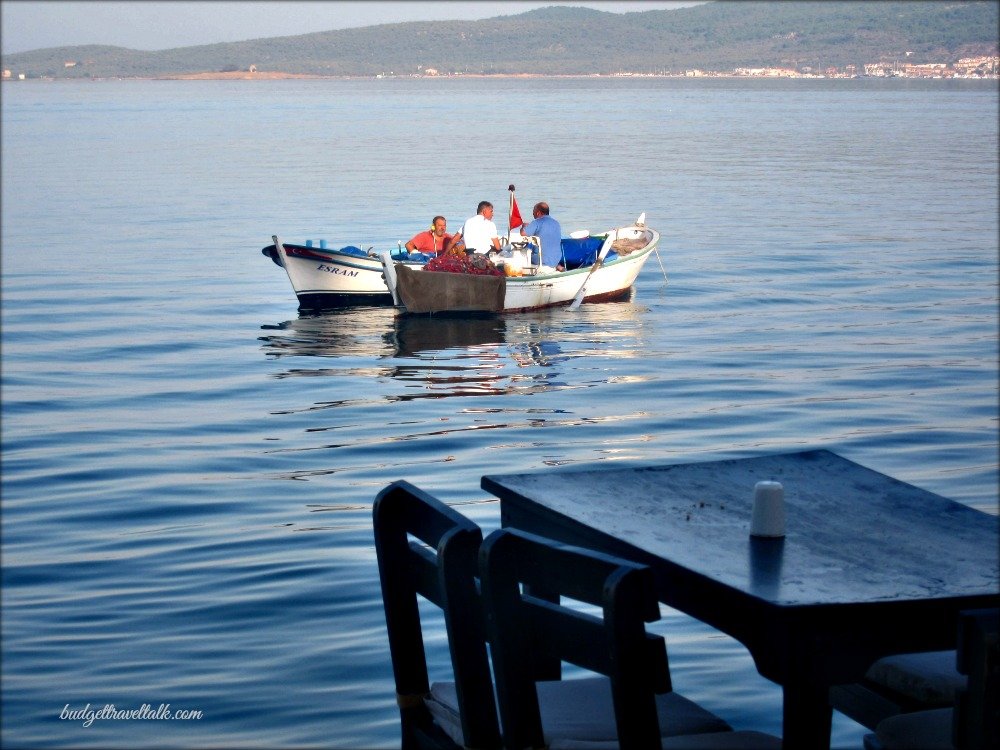 For a long time after the exchange Greek was still the most spoken language in Ayvalik, the first stop on our Izmir/Gallipoli road trip. 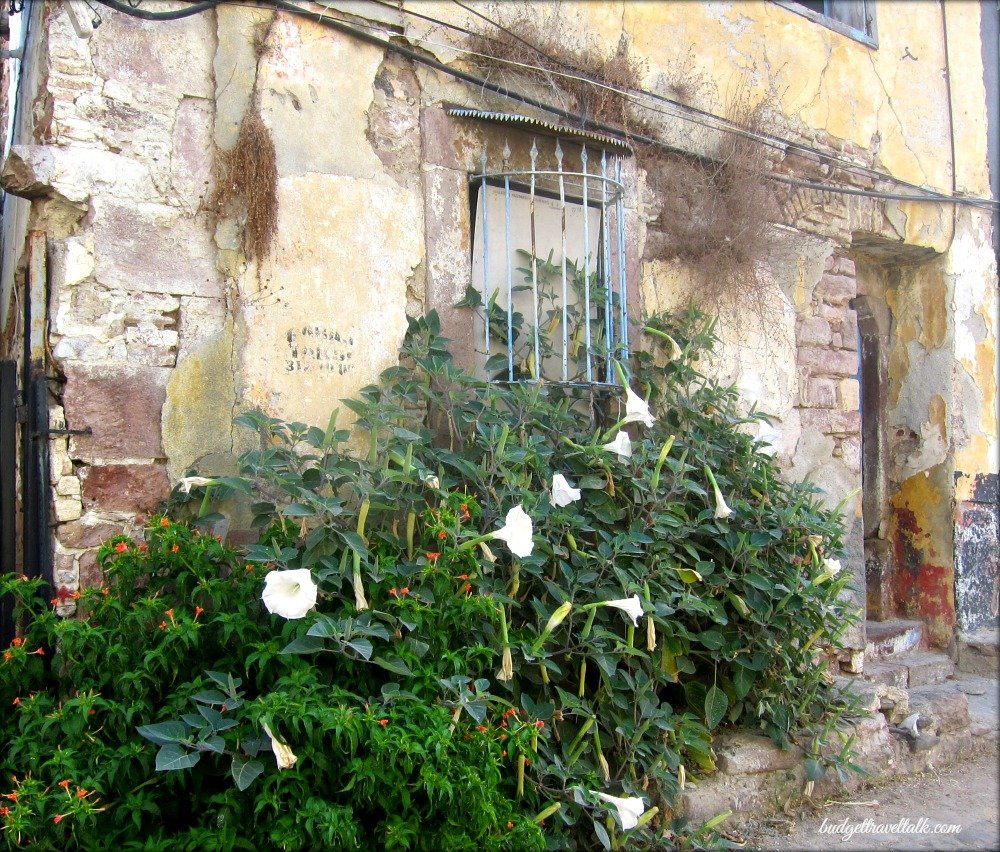 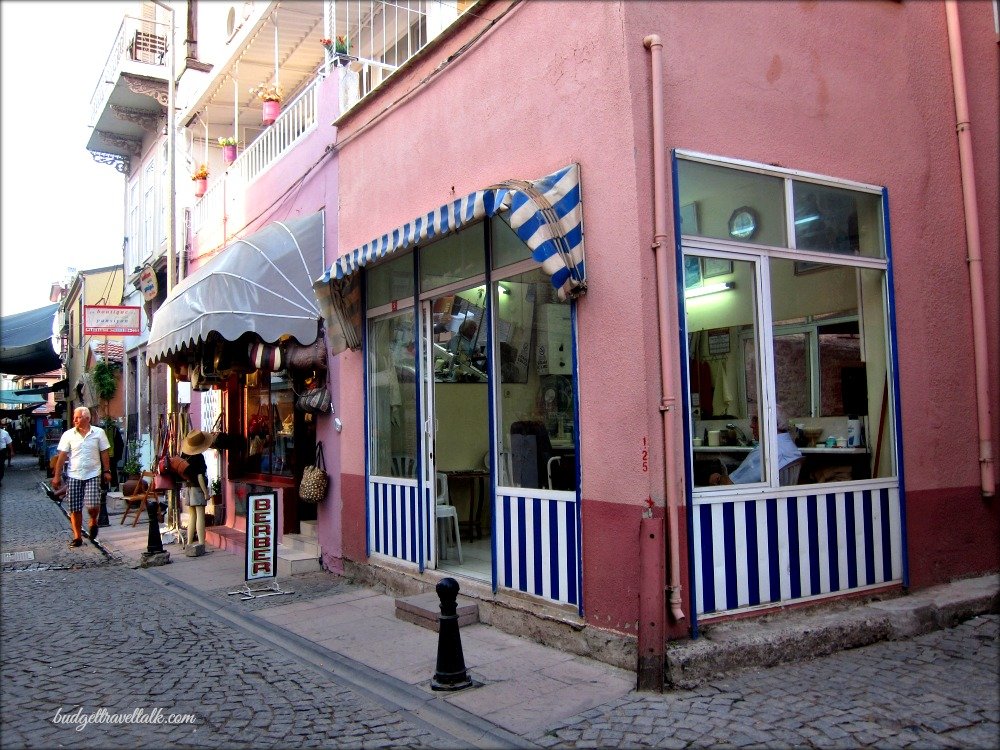 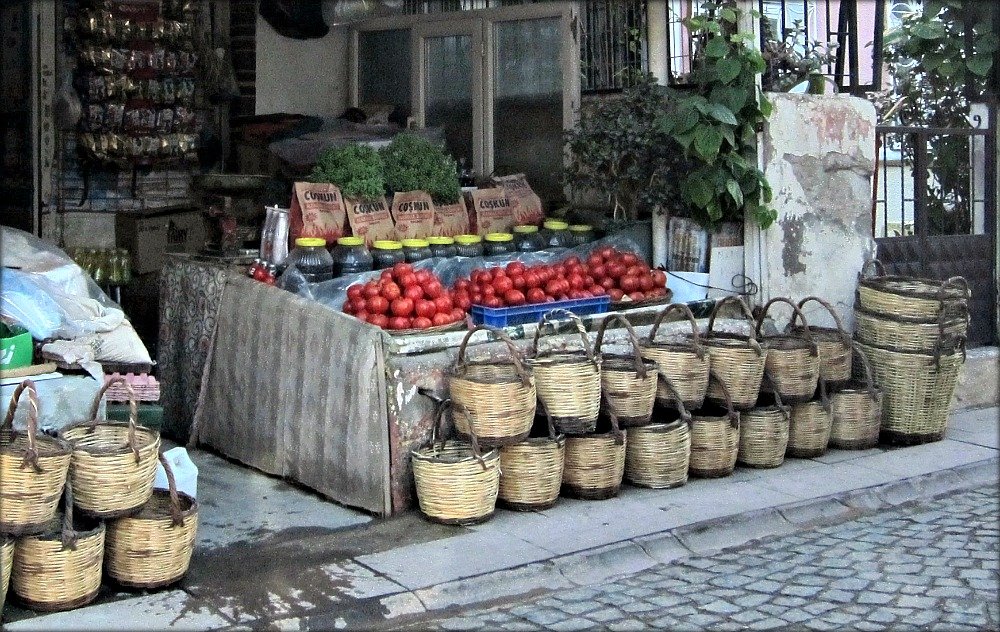 Unlike the sites of other population exchanges, i.e. Kayakoy near Fethiye, these expatriated Turks actually lived in the empty Greek homes.

We loved the friendly atmosphere generated by the lovely and knowledgable Cicek, who spoke excellent English and before leaving we had already started thinking of returning after our journey north. The power went out on the Thursday night, possibly due to the market preparations. Whatever the reason it was evidently a common town occurrence and soon candles appeared and the back courtyard took on a romantic glow. 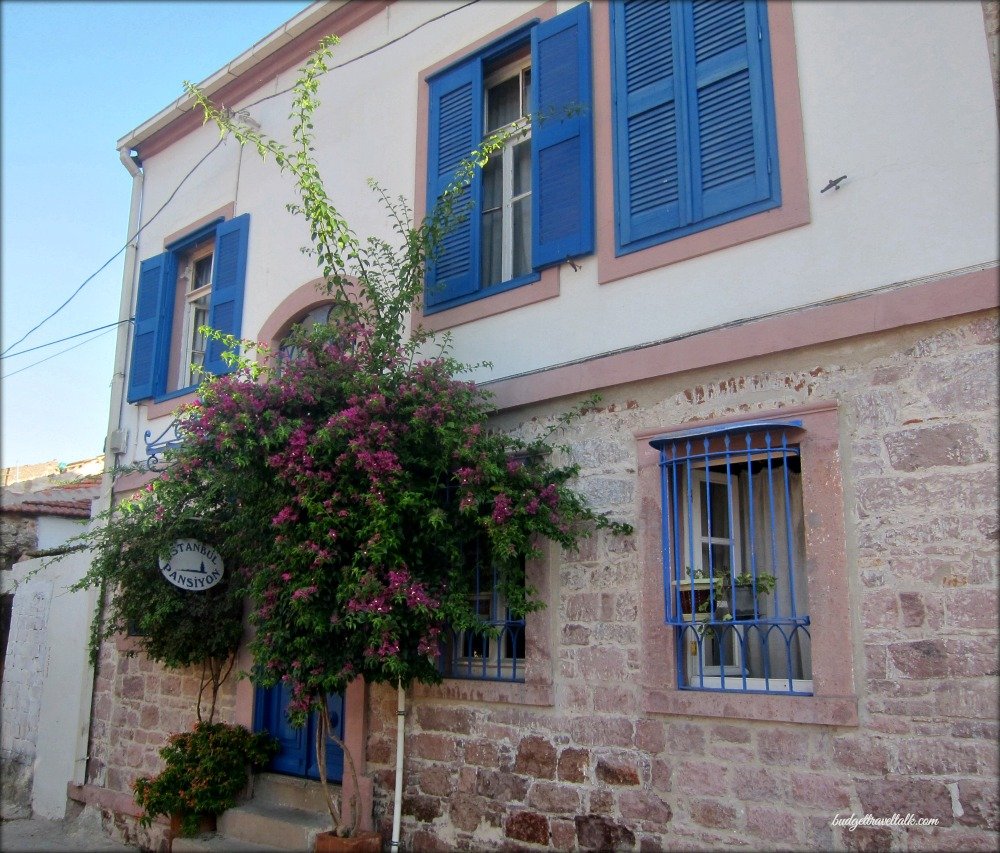 The square out the front could be used for (free) parking, except for Thursday night and Friday when the marketeers  park their trucks in there. The Tansas (supermarket) Carpark on the esplanade can be used for parking when the square is not available. It did not take long for us to realize that parking was problematic in Ayvalik. 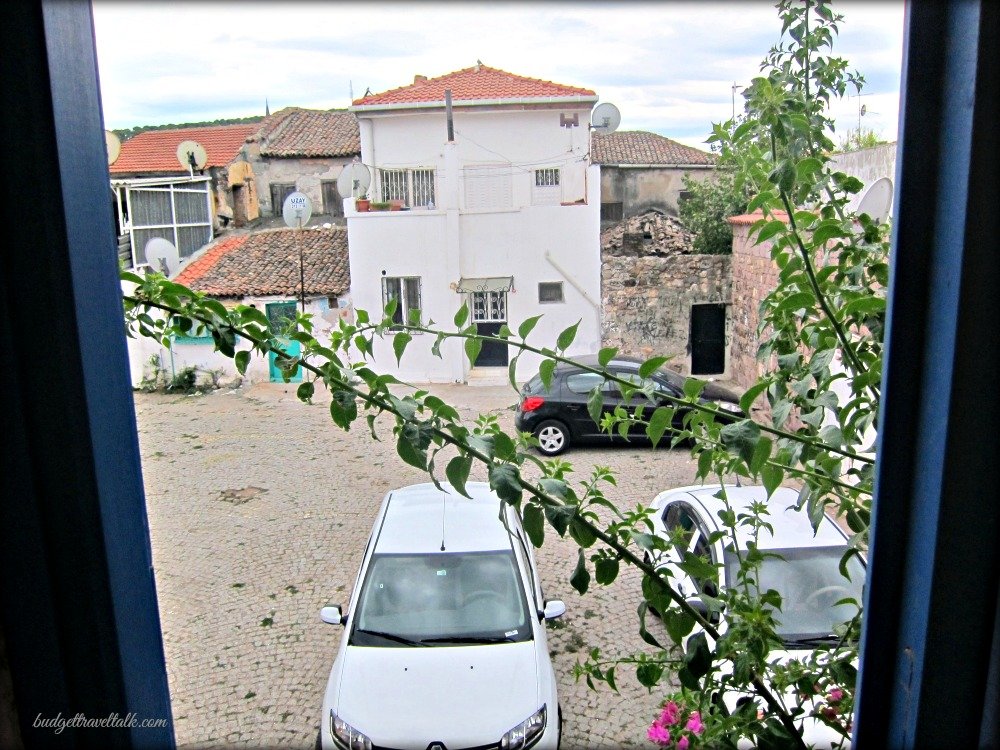 The nearby lanes were full of local flavour with the corner shop selling authentic olive harvesting baskets and glorious tomatoes. 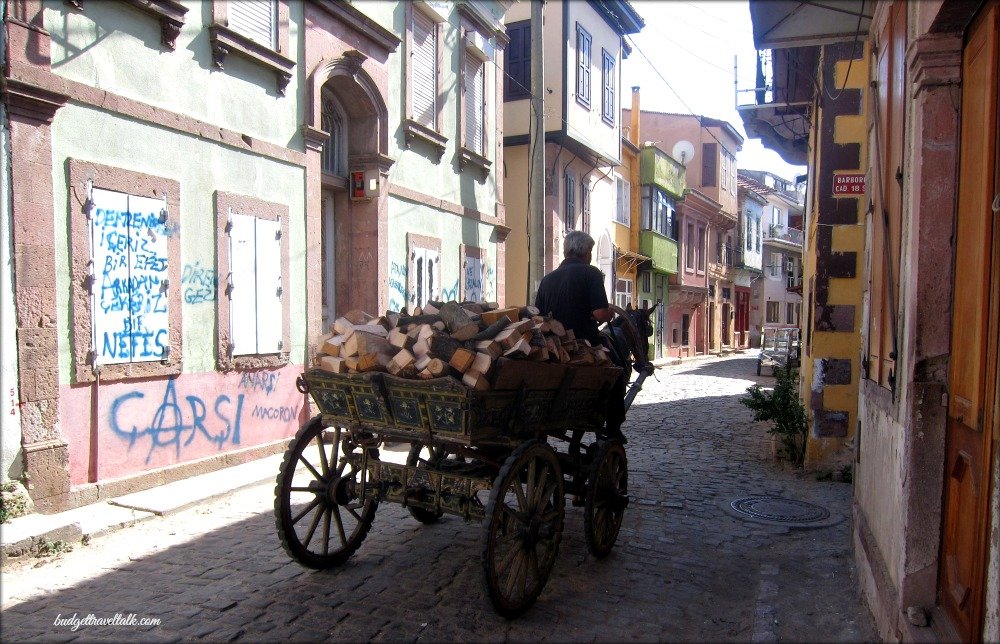 Negotiating the lanes of the old town required skill, patience, a fairly small vehicle and was near impossible on Market Day. 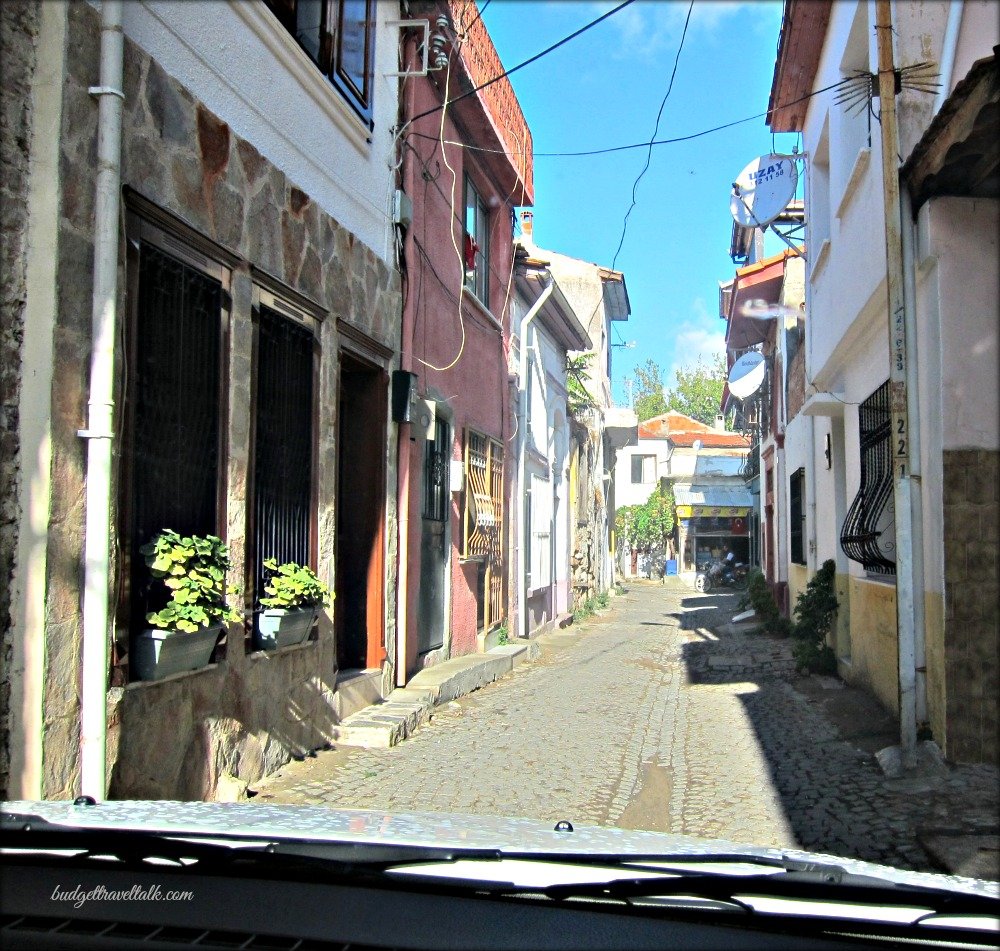 Signs of the impending market started appearing on Thursday evening but the market kicked off leisurely mid morning on Friday.

We stumbled over these eager mannequins on Thursday night. 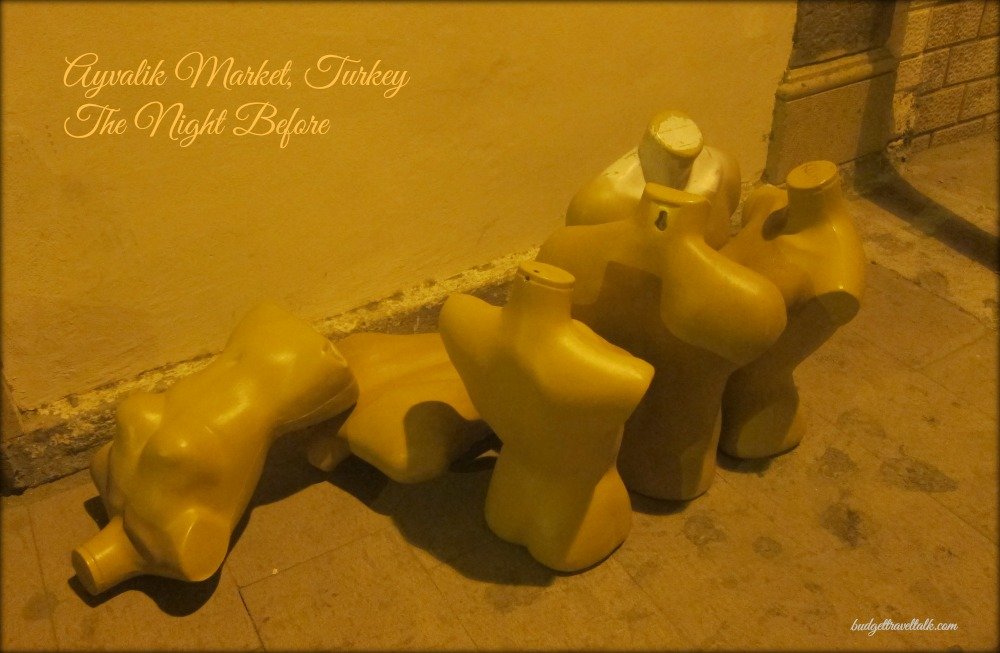 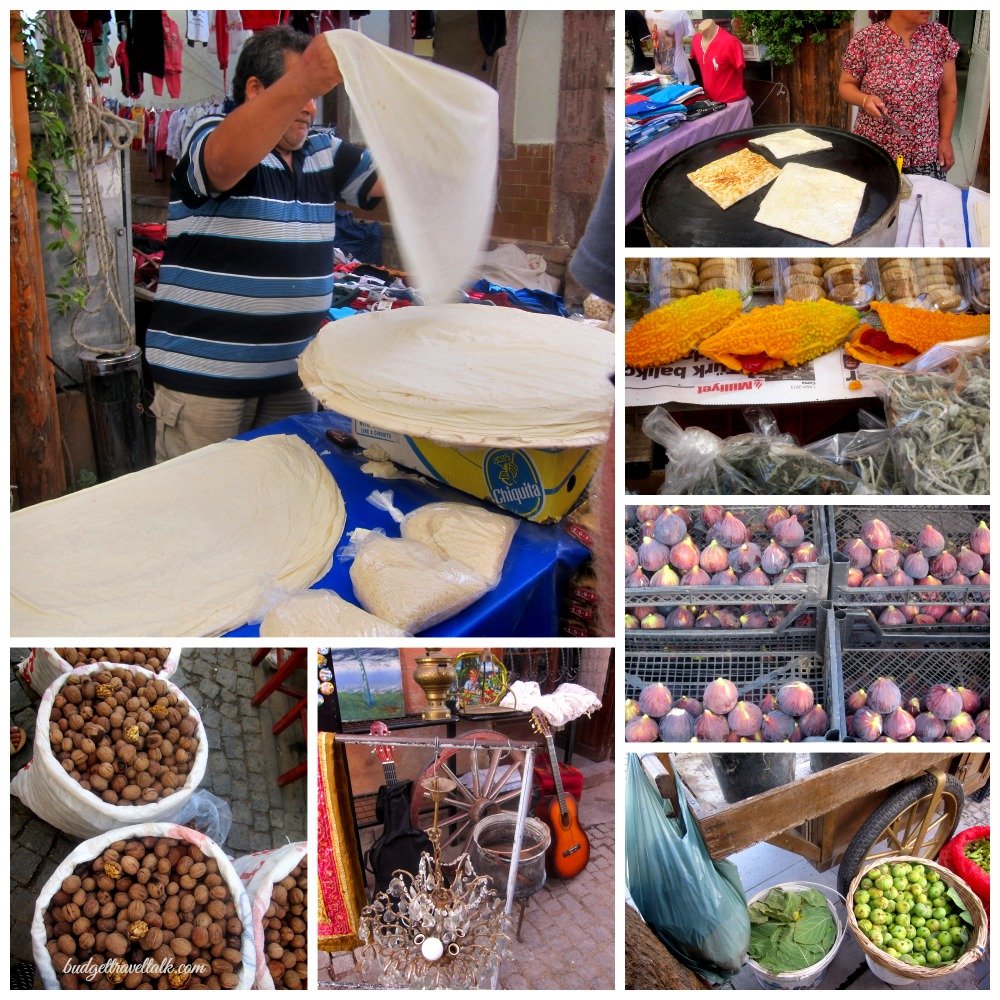 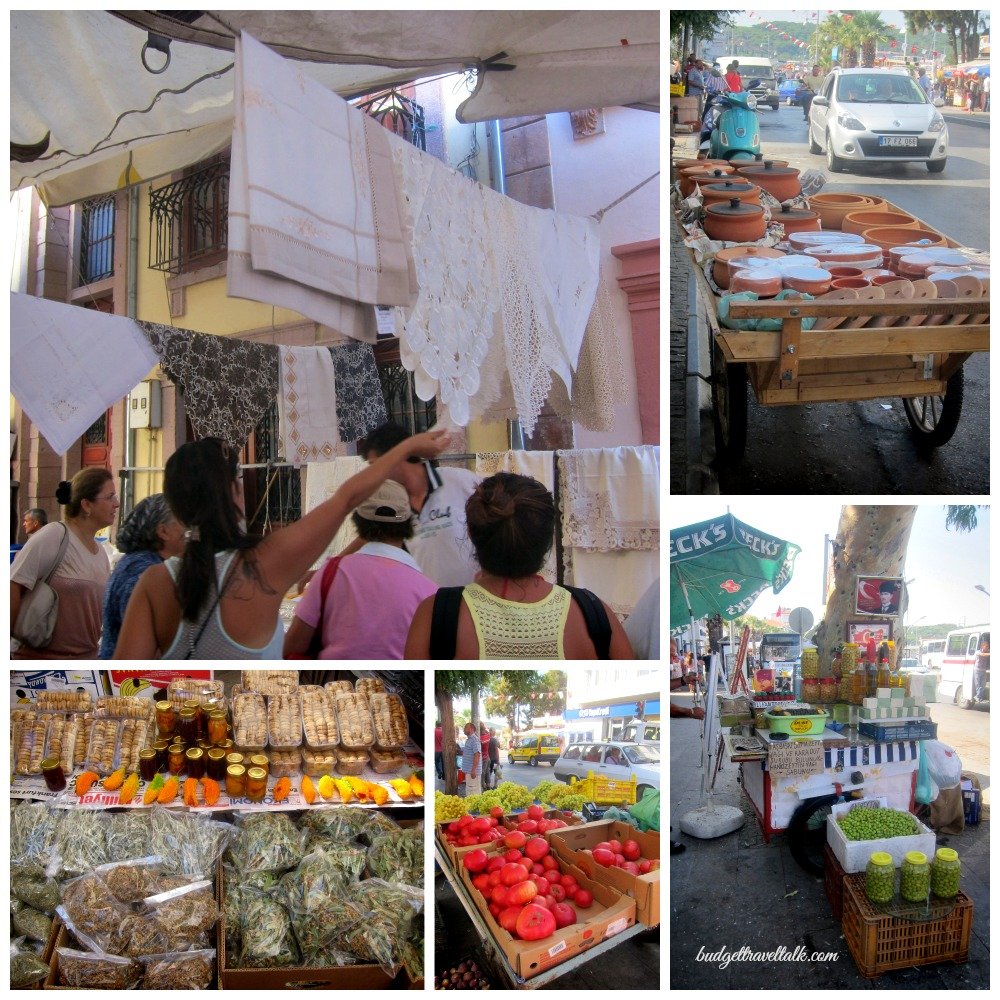 Ayvalik is the departure point for boat trips, with party, day trip and dive boats moored side by side along the waterfront. Red Coral found at depths of 30m to 42m is what the divers come for with the best sites being Deli Mehmetler, Ezer Bey and Kerbela. Other boats go to Patrica Nature Reserve on the other side of Cunda Island for swimming and lunch. Trips operate May to November.

The Esplanade and Waterfront busy with Tourist Boats. 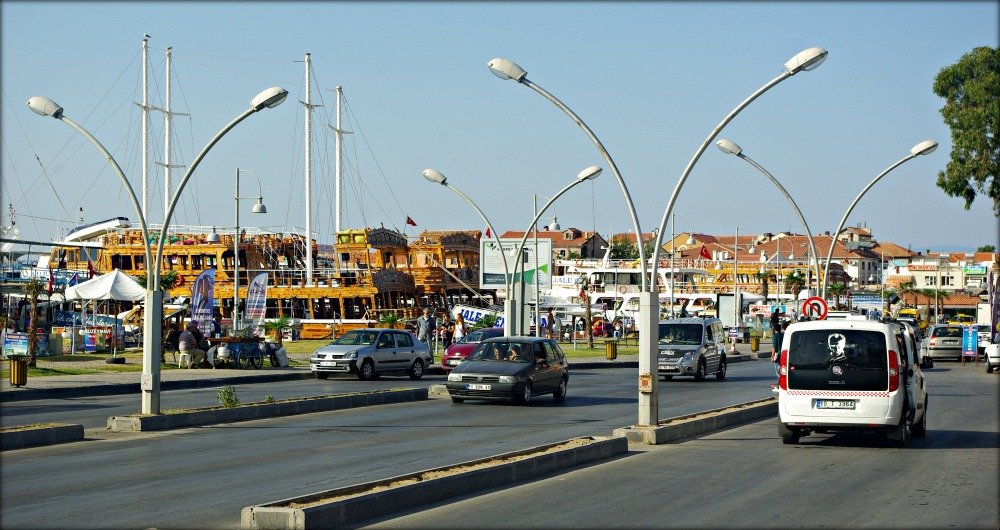 On our first night we ate at Tik Mustafa’nin Yeri tucked down an alley on the town side of the esplanade, which had a large selection of cold Meze and cooked to order fish. English was scarce, but we were encouraged to point and choose from the display and enjoyed eating at an outside table beneath the vines. 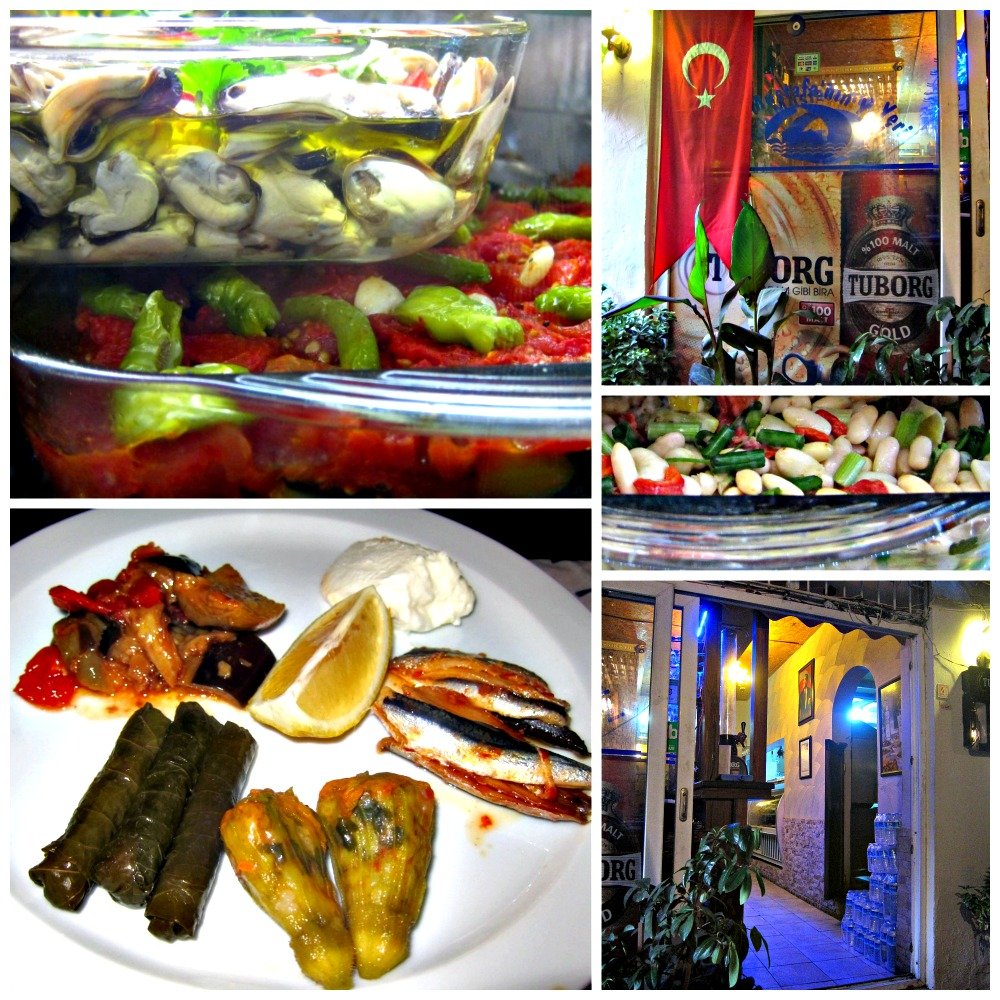 The waterside eating places looked enticing and well patronised (see below) but on our second night we browsed the lanes behind them and chose a Lokanta (cheap ready made meals) serving dishes as strange to us as lamb tripe soup (thumbs up from Marty) and my simple yet delicious chicken and potato casserole. 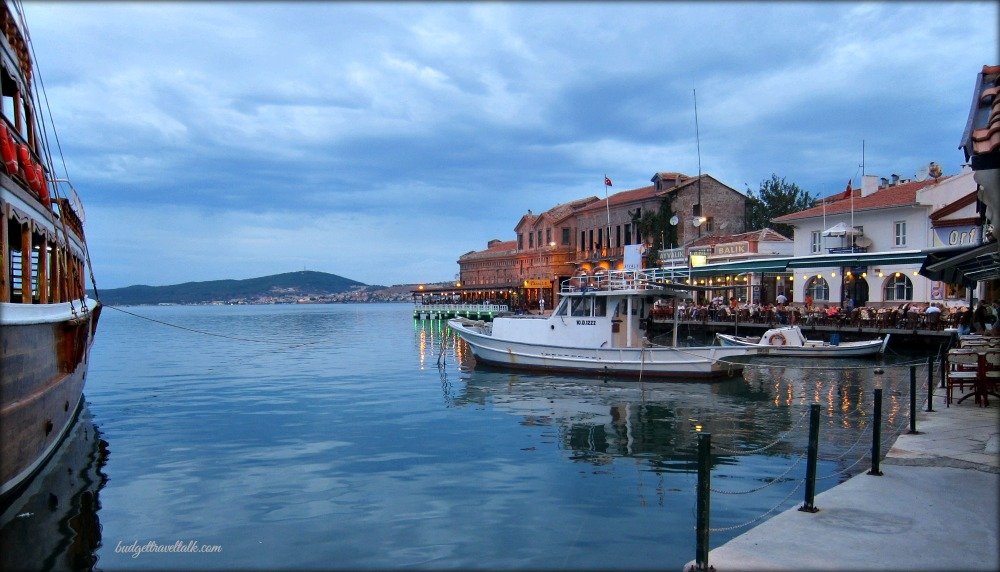 Ayvalik Olive oil has been prized since 1923 when Turkish Muslims from Crete and Lesbos settled here. In the early days it was traded through nearby Cunda Island (pronounced Choonda) to France and Italy and today the region supplies 80% of Turkey’s olive oil. The climate and soil, like in Crete and Tuscany are perfect for olive growing. Needless to say the oil is for sale everywhere, with tastings offered prior to purchase. 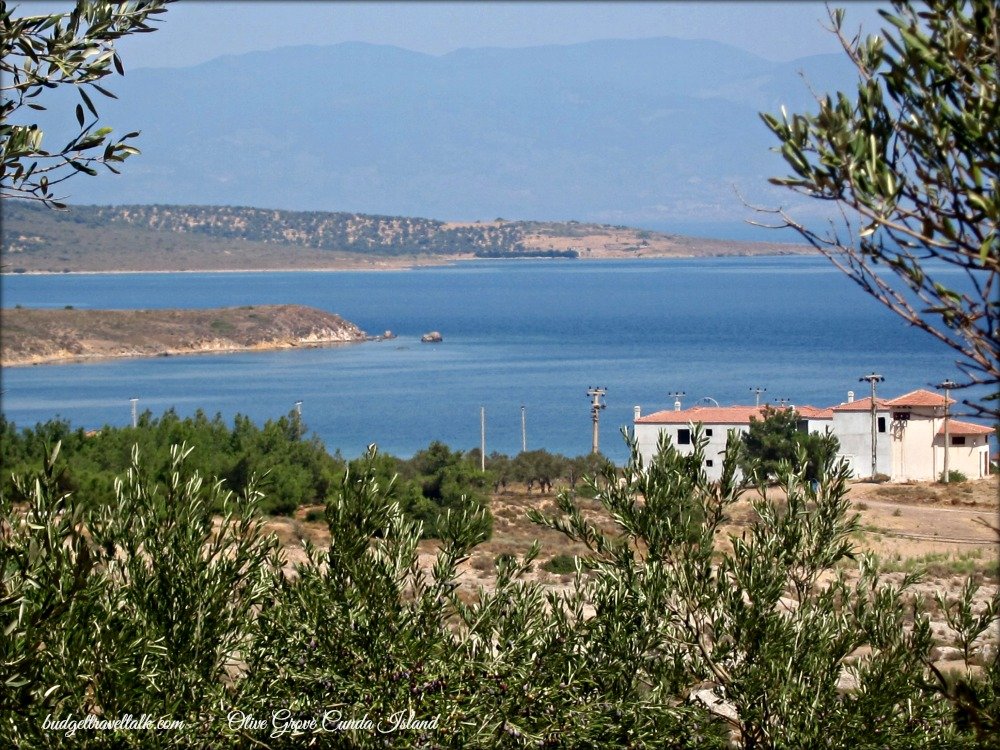 Cunda, also known as Alibey, is accessible by both boat and causeway with restaurants clustered around the port area. Considering the history of the area I guess we should not have been surprised to discover a Greek windmill standing on a rise behind the port.

Cunda is much loved and is a favourite holiday destination for Turks from Izmir to Istanbul. 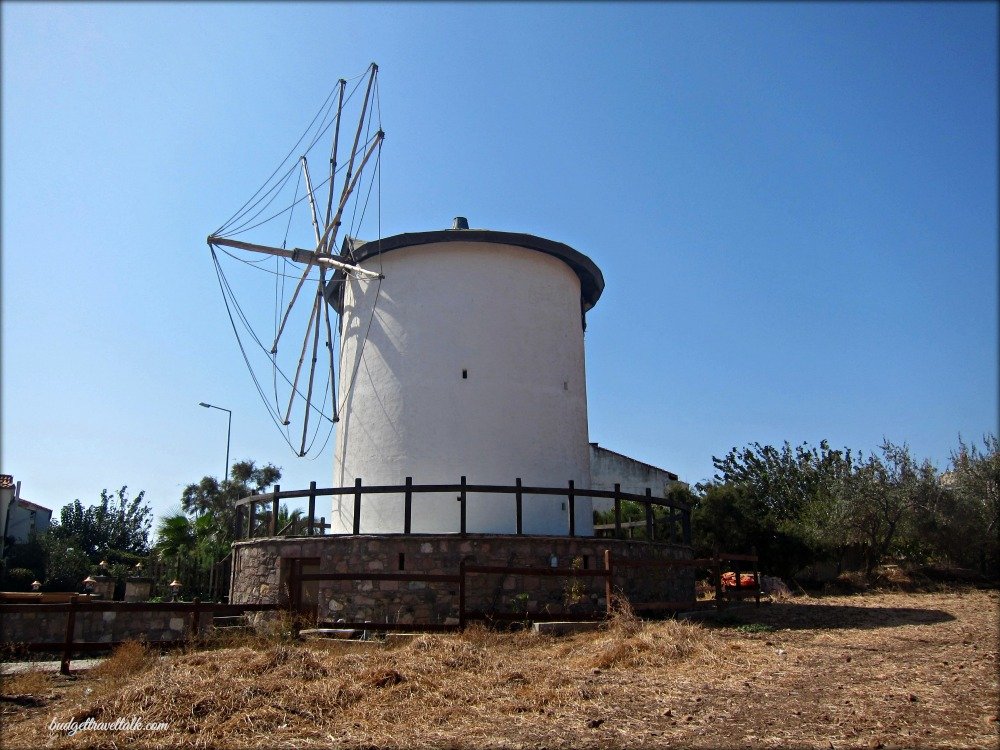 Ayvalik – it’s all about a Turkish seaside holiday – with Grecian overtones. 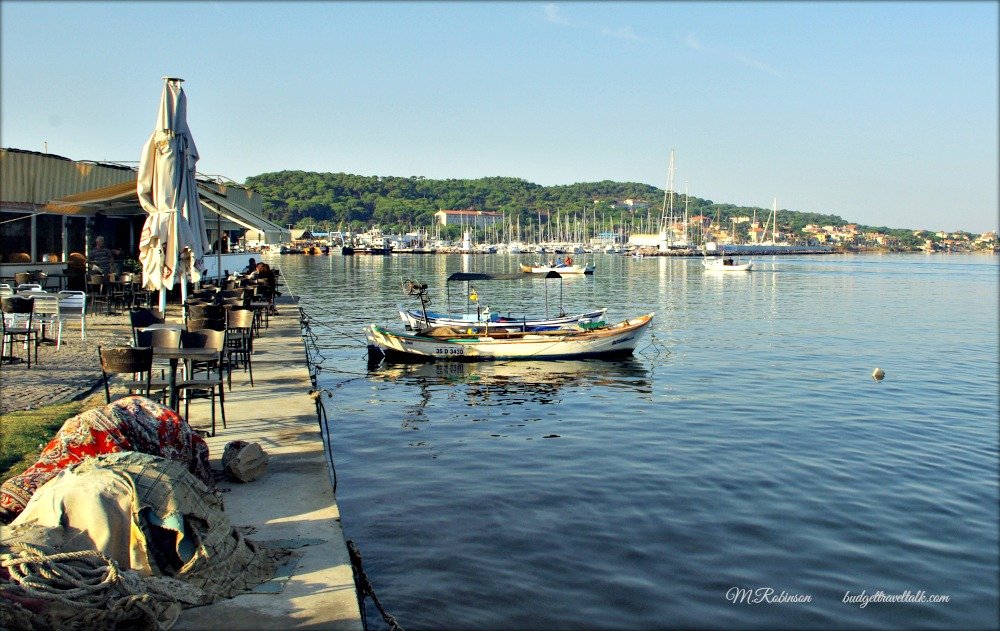 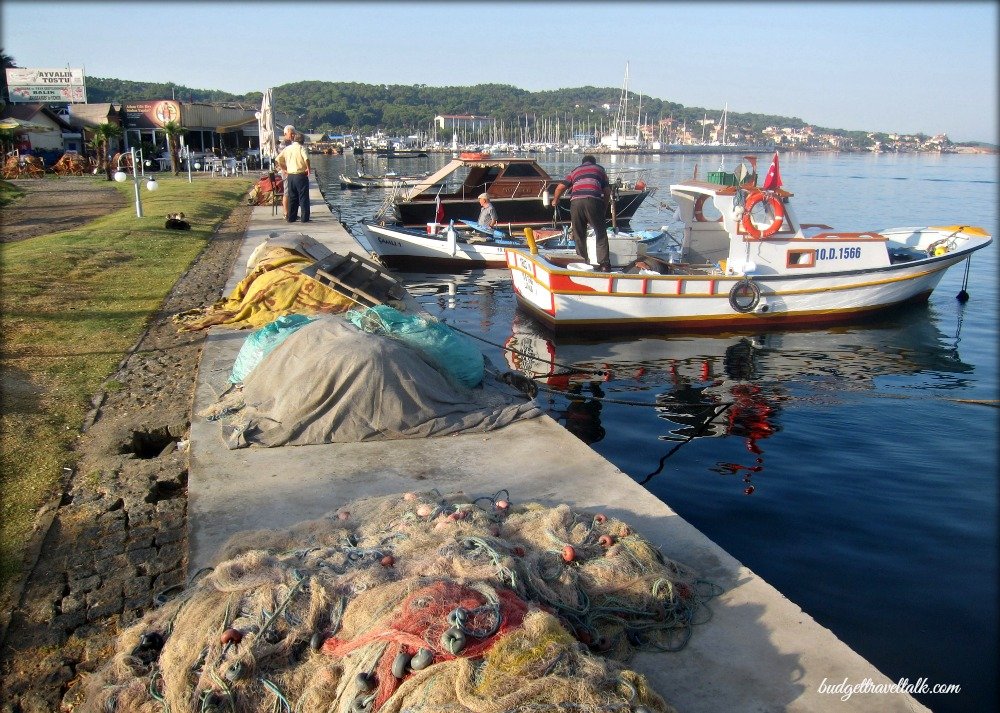 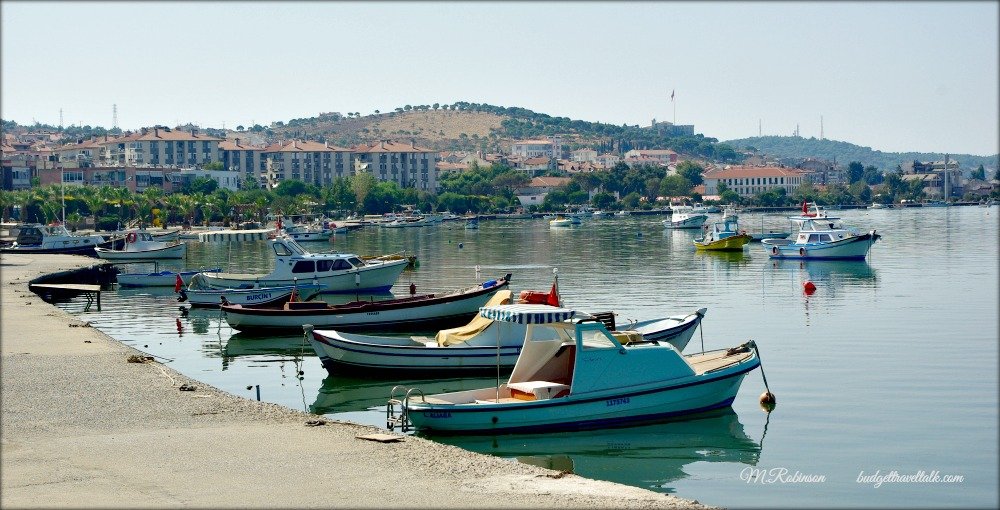 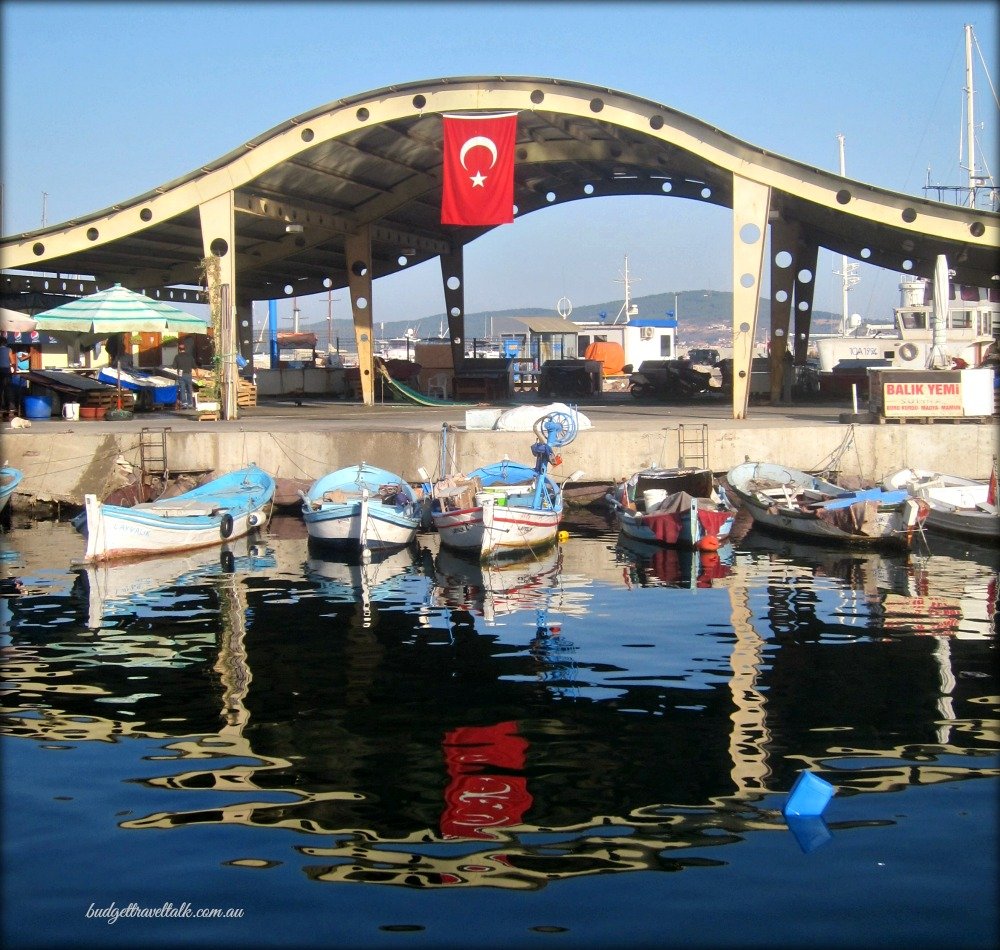 Ayvalik Tost (toasted sandwich) is available in Istanbul and elsewhere but it originated here. Thick bread is toasted then loaded with freshly fried slices of Sucuk and sausage, tomatoes, sliced gherkins/pickles and cheese top and bottom.  Lashes of ketchup and mayonnaise are added before it is squashed in a sandwich press.  I think I know what the locals eat after a big night on the town.

ISTANBUL PANSIYON – 45tl per person including a filling breakfast

Today I have linked to Nancie’s Budget Travelers Sandbox for Travel Photo Thursday where this week the focus is on Korea.

Lycian Tomb viewing in Fethiye
Next Post: Tuesday in Townsville and a Mini Break at Mission Beach