UPDATED APRIL 2018. Colour always makes me happy and I was more than happy to visit the Torii Gates Fushimi Inari Shrine on the sacred Inari Mountain near Kyoto. I love quirky and the thought of walking beneath many thousands of bright orange, or vermillion torii gates, was too exciting to resist. If you love colour and quirky it follows that you should be happy too!

What is a Torii Gate?

It is a traditional Japanese Gate that marks the barrier between Ordinary and Sacred.

The colour is believed to provide protection against evil forces. It is achieved by mixing mercury and red earth, an ancient timber preserver.

Torii Gates, whether plain timber or brightly coloured, mark the entrance to all Shinto Shrines, but here they’ve gone wild covering over 4 km of mountain trails. The torii gates snake across the hillside, complemented by 5 shrines and many more sub-shrines. There are multitudes of miniature gates propped here and there with an estimated total of 10,000 gateways.

The gates in their differing orange shades and patinas, with glimpses of forest between, provide hours of tantalising visuals.

If you love photography you should be happy under the Torii Gates and peeking through them. 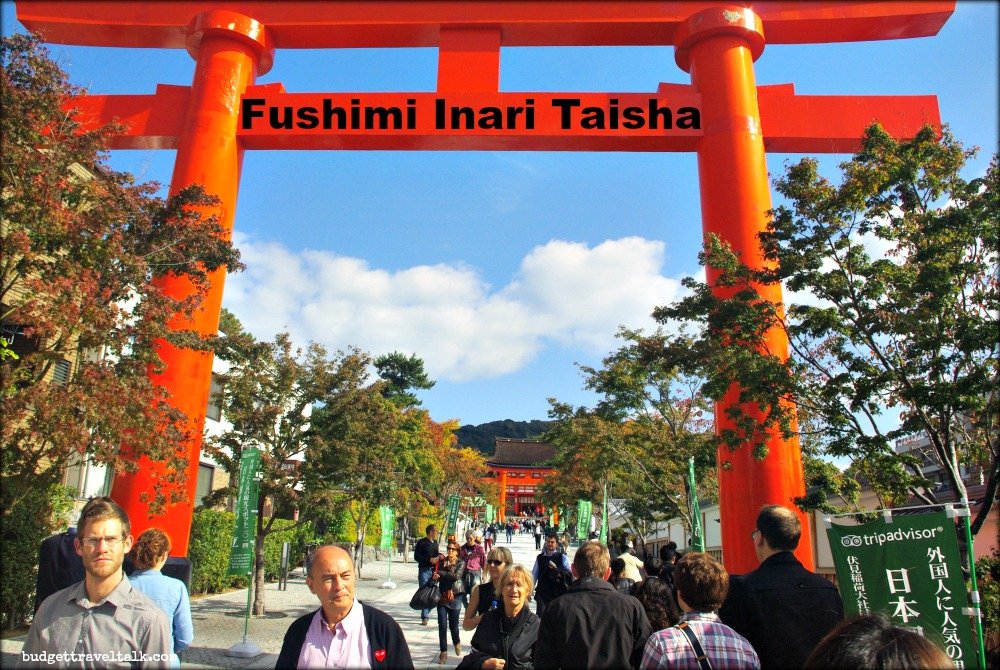 God Inari is the Shinto Deity in charge of rice, sake, merchants and manufacturing. The deity in question, Inari Okami, is recorded as taking up residence on the mountain on the first Day of the Horse of the second month of 711.

Fushimi shrine is the head of more than 30,000 Inari Shrines in Japan. This seemingly huge tally does not include Buddhist or Shinto Shrines lacking a resident priest. When all shrines, including priest-less ones are considered, the total is massive (probably over 40,000). It comes as no surprise then that Fushimi Inari Taisha is important to the Japanese people.

This is played out during hatsumōde Dec. 31 – Jan 3rd, when believers make their first shrine/temple visit of the year. At the shrine which may hold a special service, people pray for good luck in general or for something in particular like romance, good grades or health. In Kyoto, Fushimi Inari Taisha is the most popular hatsumode choice.

But it is not only the Japanese who flock to Fushimi. Trip Advisor names this shrine as the No. 1 Thing to Do in Kyoto – a position it has held since at least 2014.

A Taisha is a Shrine 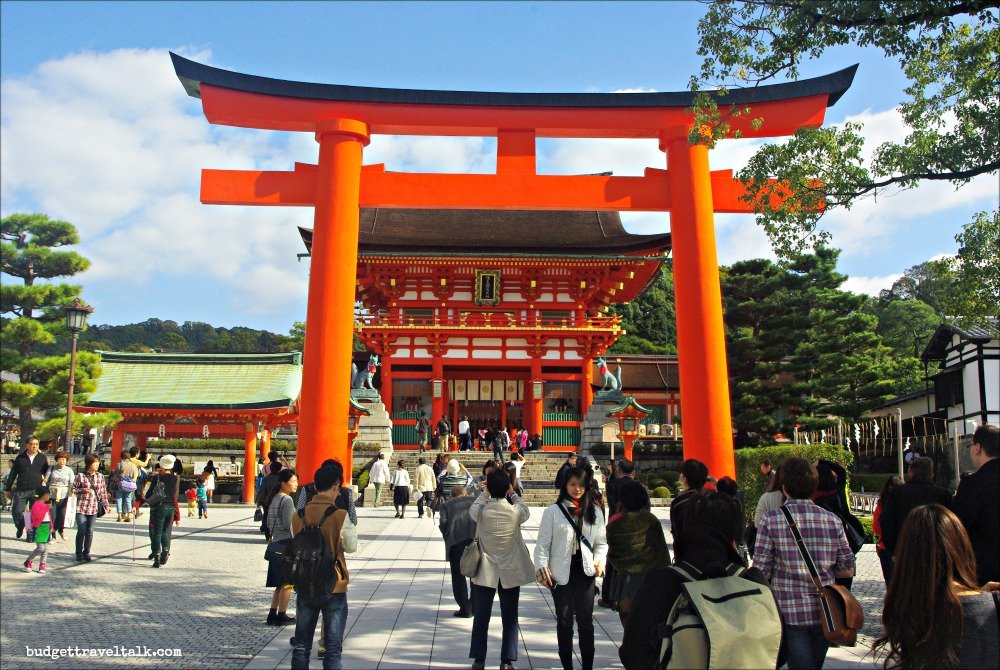 What would it be like walking beneath this seemingly endless halo of orange Fushimi Inari gates?

The 4km mountain trail is covered by groups of gates interspersed with small shrines. Some gates are missing and others faded to just a hint of pink, but the overall effect is compelling. Local Businesses and Individuals purchase the gates in return for naming rights. Names are written on the rear of the posts.

A plea to the Inari Deity and an advertising campaign as well?

Costs range from 400,000 to 1,000,000 yen so each gate is a considerable investment.  This sacred site was established in the year 711, then destroyed by civil war in 1468. Gates are replaced as needed and have dates inscribed in Japanese. 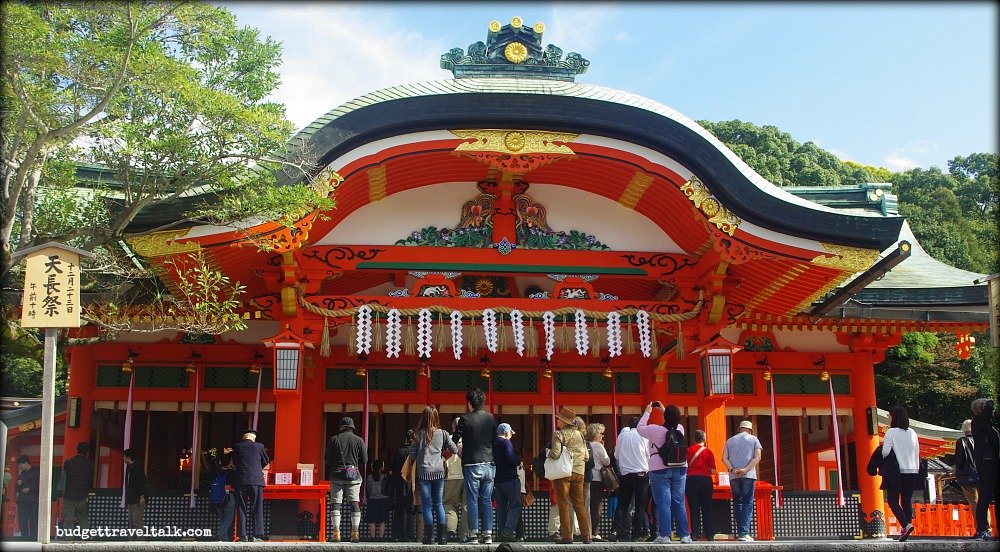 The path splits in two early on but rejoins shortly after. 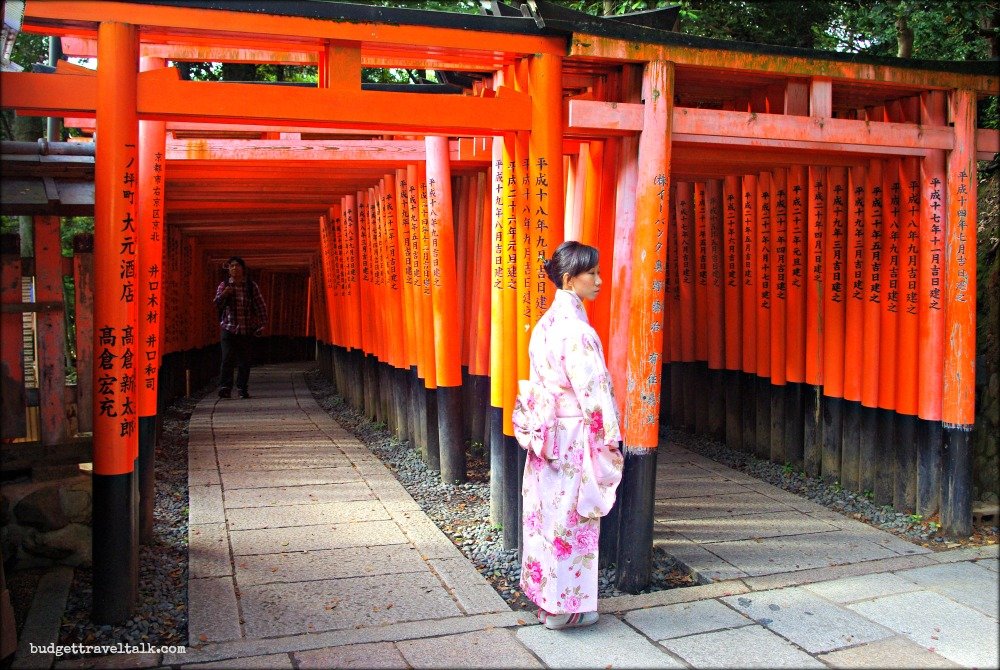 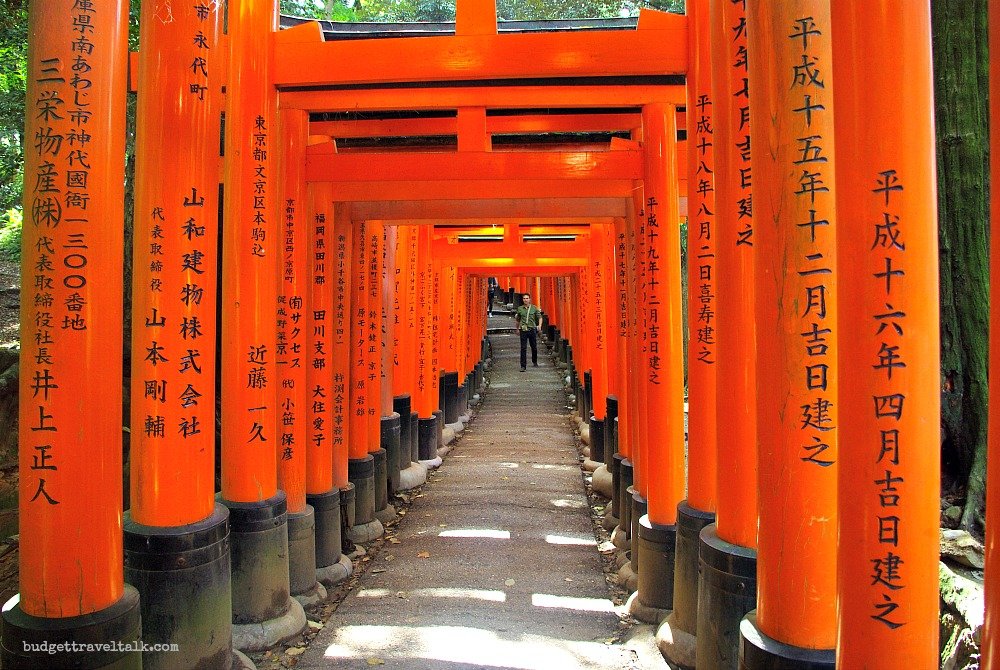 Inari Japanese Food – What to Eat

Inari Sushi is the favoured food of Kitsune, the Fushimi Inari Shrine Fox.  Mythical red foxes are believed to serve as Messengers to the Inari God all over Japan, not just here. Similarly, Inari deep fried tofu pockets stuffed with sushi rice, are the favoured food of Fushimi Inari worshipers. The Inari Tofu here is folded into peaked corners resembling foxes ears. I’ve eaten Inari Sushi in Australia and although I may be influenced by occasion, they taste much better here.

Kitsune Udon, Udon Noodle Soup with Fried Tofu, is another popular meal choice on the sacred mountain.  Not being a tofu fan, Marty chose tempura prawn soup instead. The view from the Inari restaurant we chose, was peaceful with only pretty bird calls breaking the forest quiet.

The restaurant owner sat on the opposite side of the path in a small cafe and brought our food across to us. Can you see the bamboo walking sticks for sale outside the cafe?  We chose the first restaurant as the second would not allow photographs. 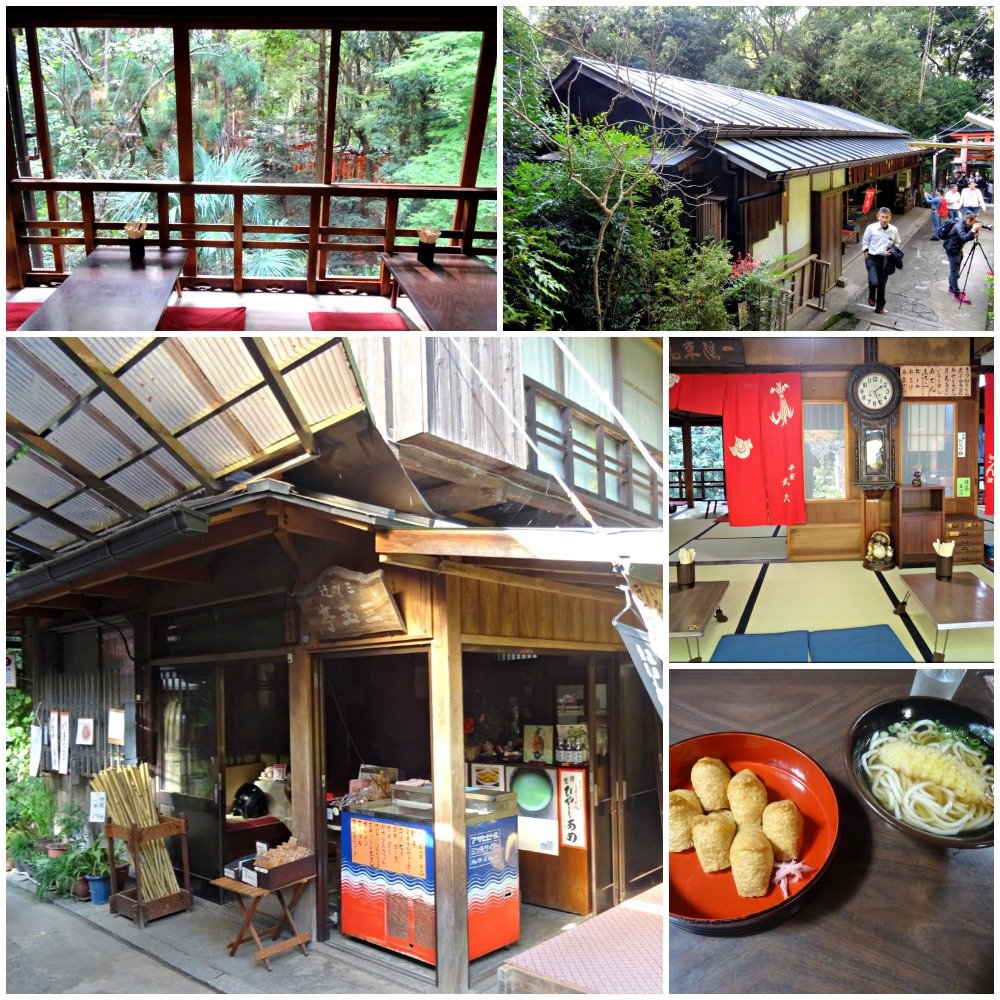 After lunch we accepted an invite to join a Shinto Ceremony, near the summit. It wasn’t pre-arranged, we were just there at the right time and were invited to join. I’m not sure of the exact procedure because I did notice others being ushered past without joining in. I think it would be a good idea to arrive prior to the start of the ceremony. We are neither Shinto or Buddhist, but I took the opportunity to offer a silent prayer for my Mum who was not well at the time.

The Hitaki-sai ceremony takes place at 1 pm on November 8th and involves half an hour of chanting from Japanese script, burning prayer sticks (free), and offering branches of green leaves and folded white paper strips at the altar. We were also gifted the large single sheet script but obviously couldn’t read it.

Worshipers approach the alter in pairs to bow and clap. Our Japanese friend instructed us in shrine etiquette, but I was happy that my random partner at this ceremony was Japanese, allowing me to follow his lead. We were honoured to be included in this intriguing ceremony.

Hitaki-sai is held after the autumn harvest. It thanks Inari Okami for the successful harvest and the life of all creatures. During the fire ceremony 100,000 wooden tablets from worshipers all over Japan are burned. The chanting of the priests obliterates sins and invites good fortune.

There are loads of ceremonies held at Fushimi Inari. Actually the only months without ceremonies are March, August and September. You can read about the ceremonies here.

If you enjoy cultural exchanges you should be happy attending a ceremony at Fushimi Inari Shrine. 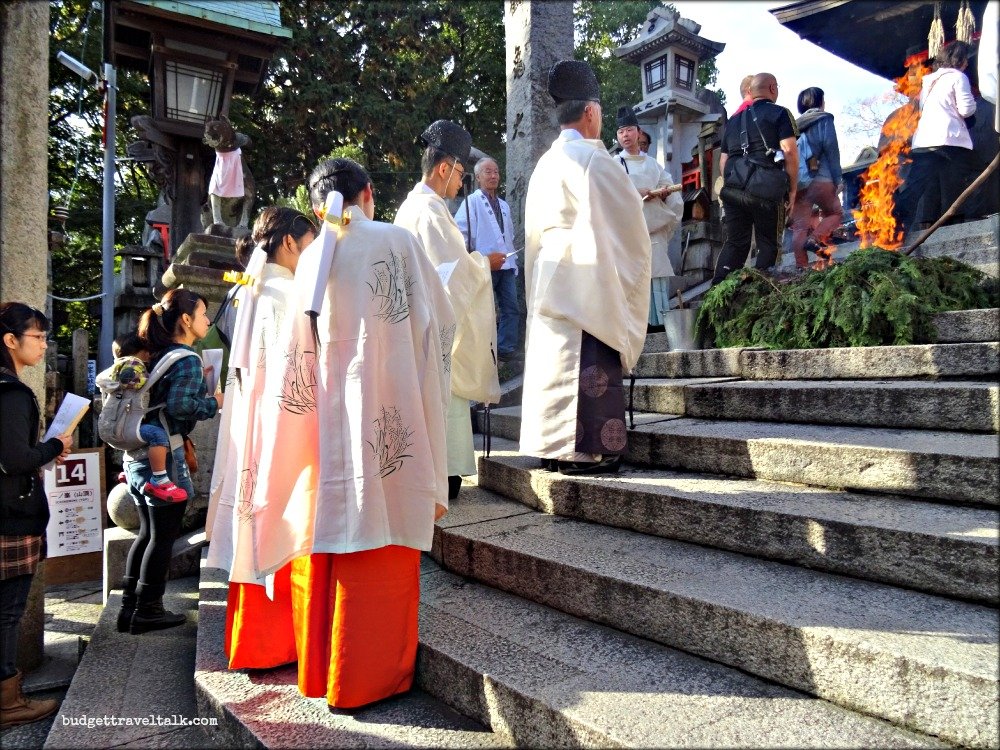 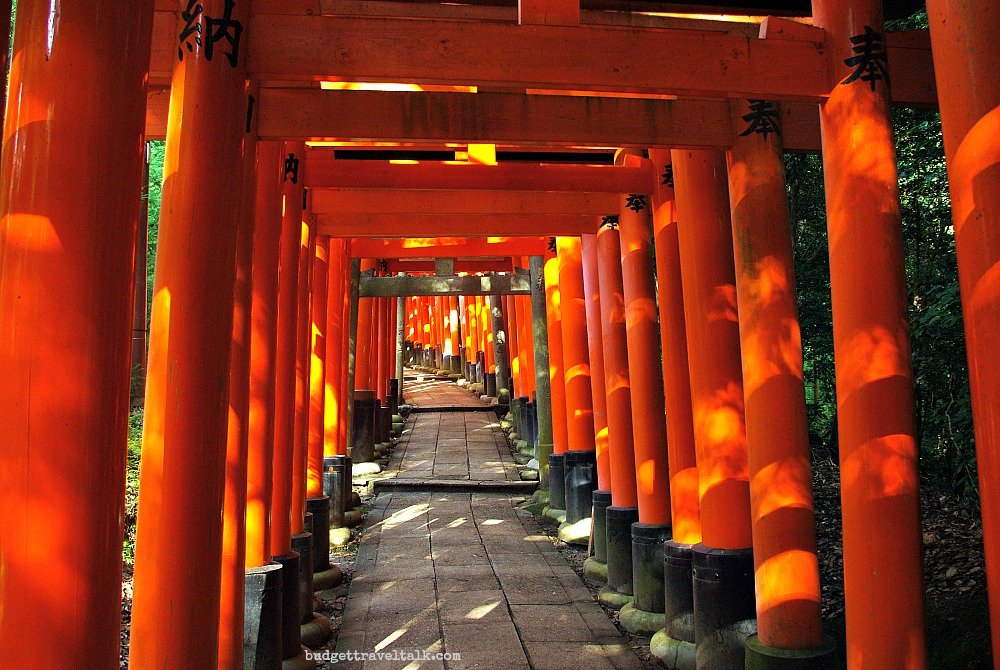 Even with lighting I can imagine that trails of a thousand torii gates would become quite spooky at night. Map boards along the route are handy to gauge the distance left to walk.  It is possible to shortcut from the red dot to the start on the map below. This leads directly to a street of food vendors.  This route is devoid of gates but has many interesting shrines. 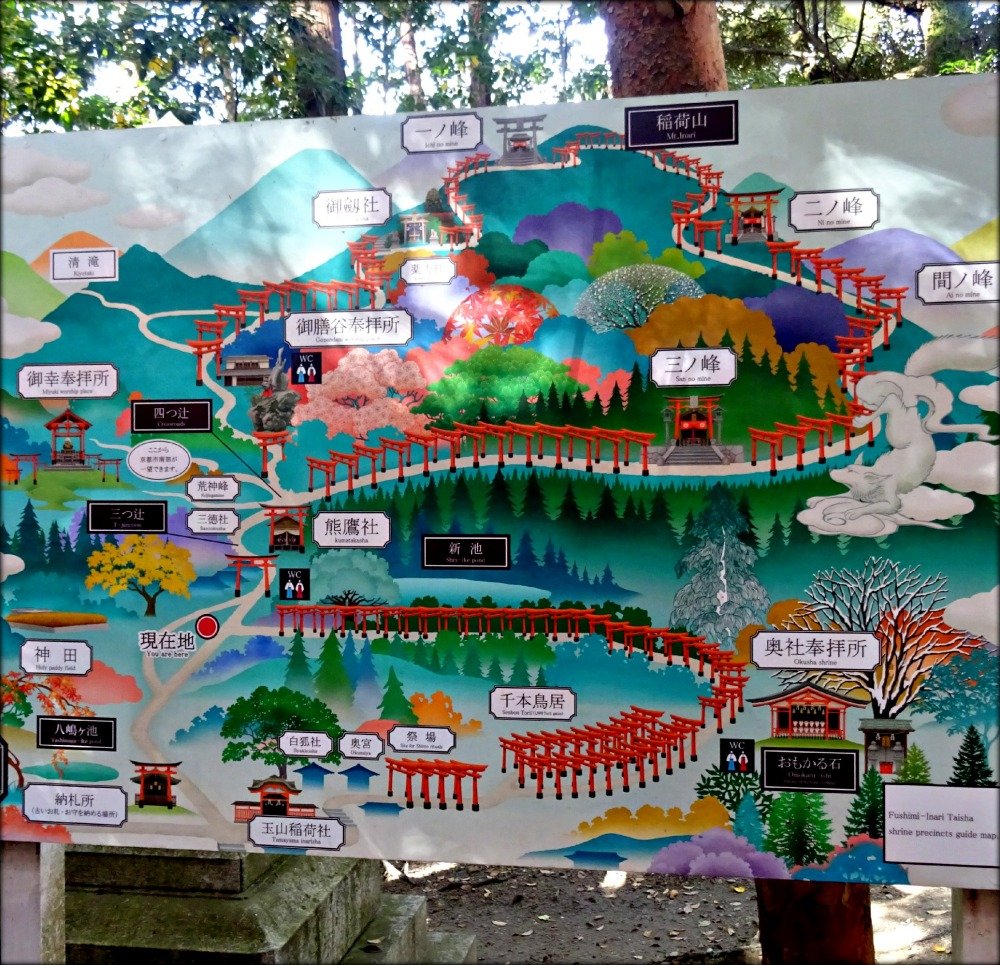 The many water stations along the route were for spiritual cleansing not drinking. 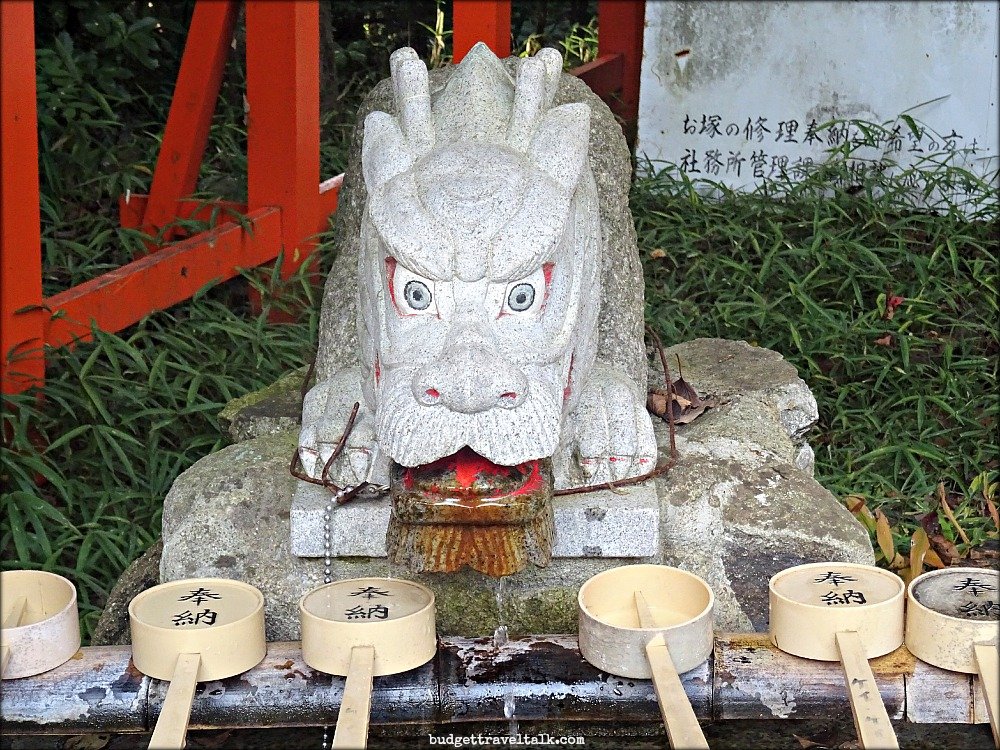 Fill the bamboo scoop with fresh water from the well;  from the scoop pour water into the left hand and trickle through the fingers;  ditto with the right hand;  pour more water into the left hand to rinse the mouth with;  run the remaining water in the scoop down the handle to clean for the next person;  return the bamboo scoop face down.  Direct all the used water to the surrounding drain, not back into the well of fresh water. 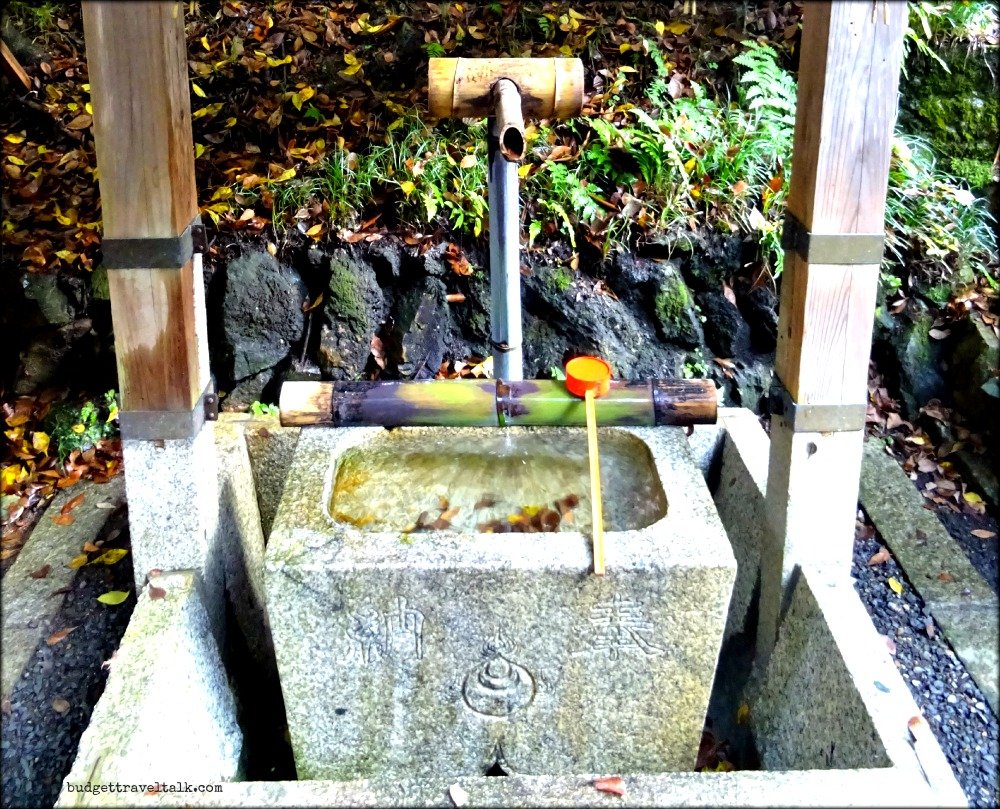 Yotsutsuji intersection, 30 minutes into the walk is a popular resting place from which to admire the view or indulge in an icecream. The track becomes circular from here on. 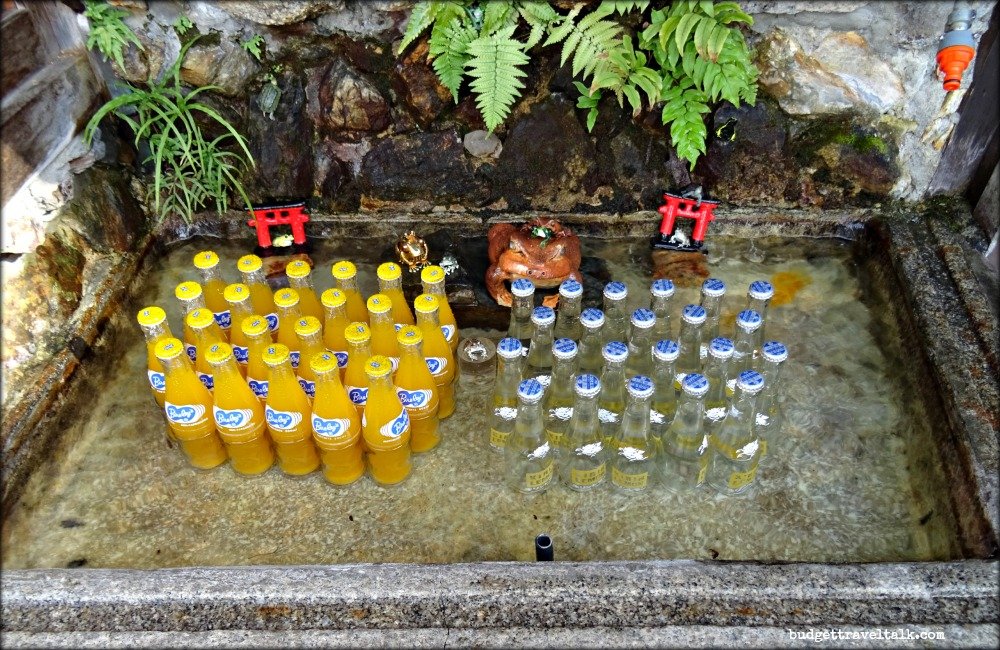 This is the only viewpoint on the walk. 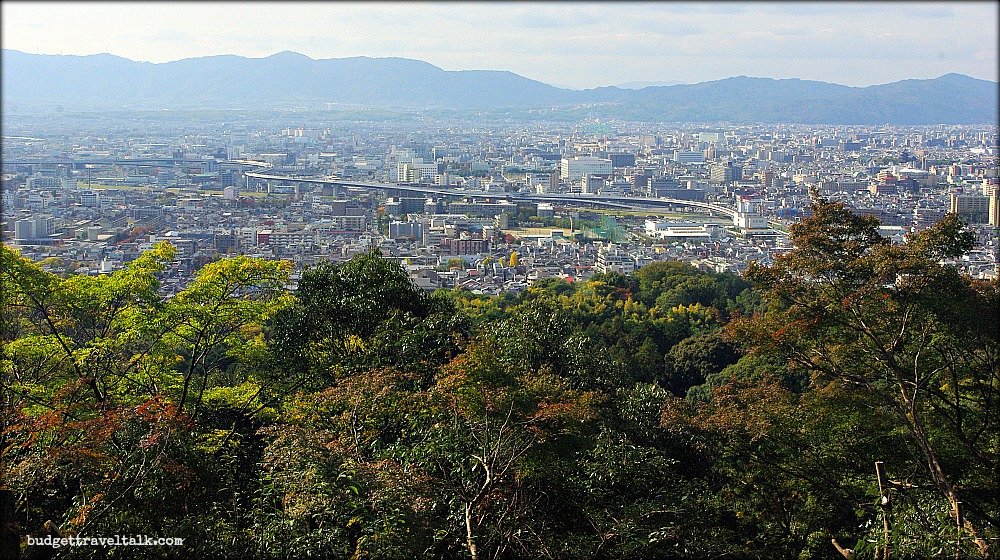 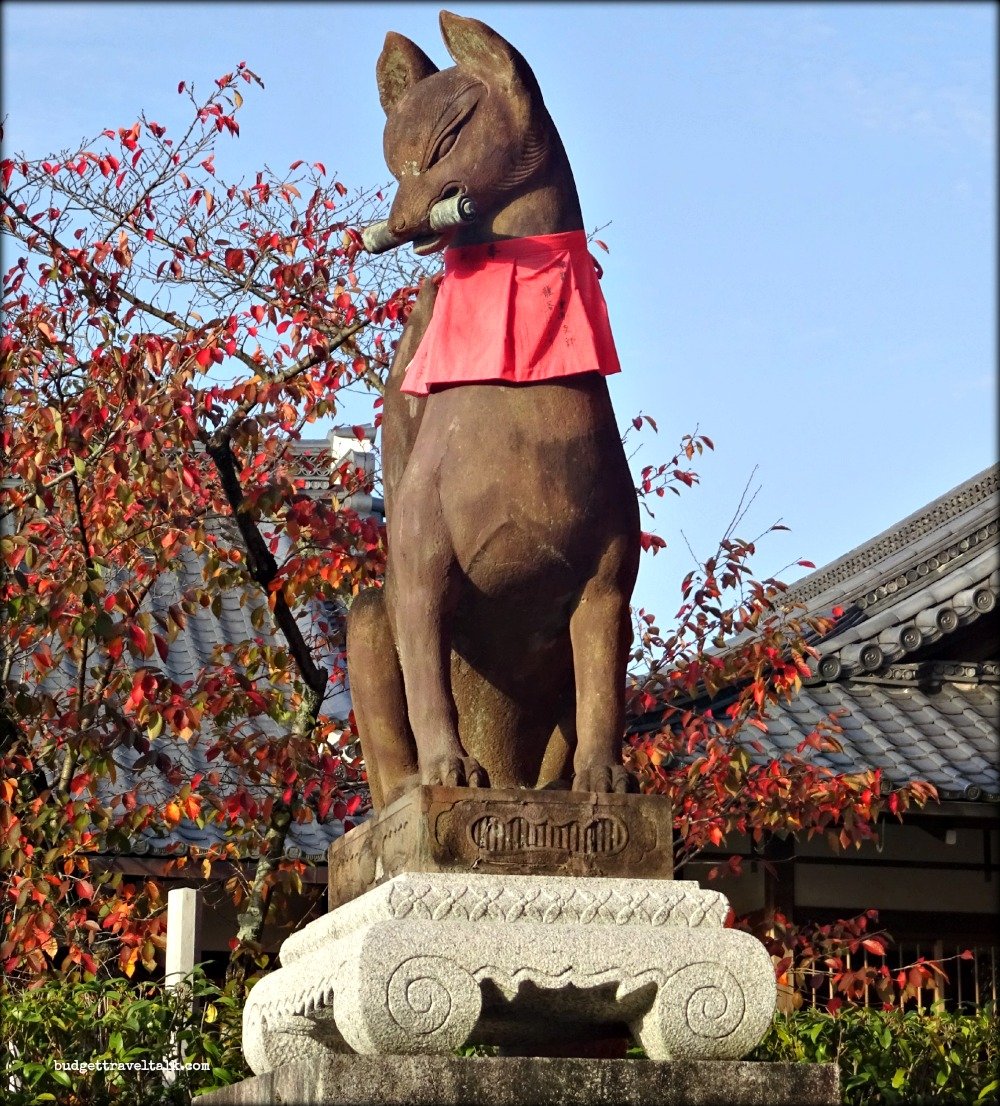 Taikyaki are made from pancake batter cooked in fish shaped double waffle irons. The waffles are sealed after your choice of red bean paste (an acquired taste), custard or chocolate filling are added. Tai translates to red snapper which is known as a lucky fish. Marty approved of his custard filled Taiyaki. 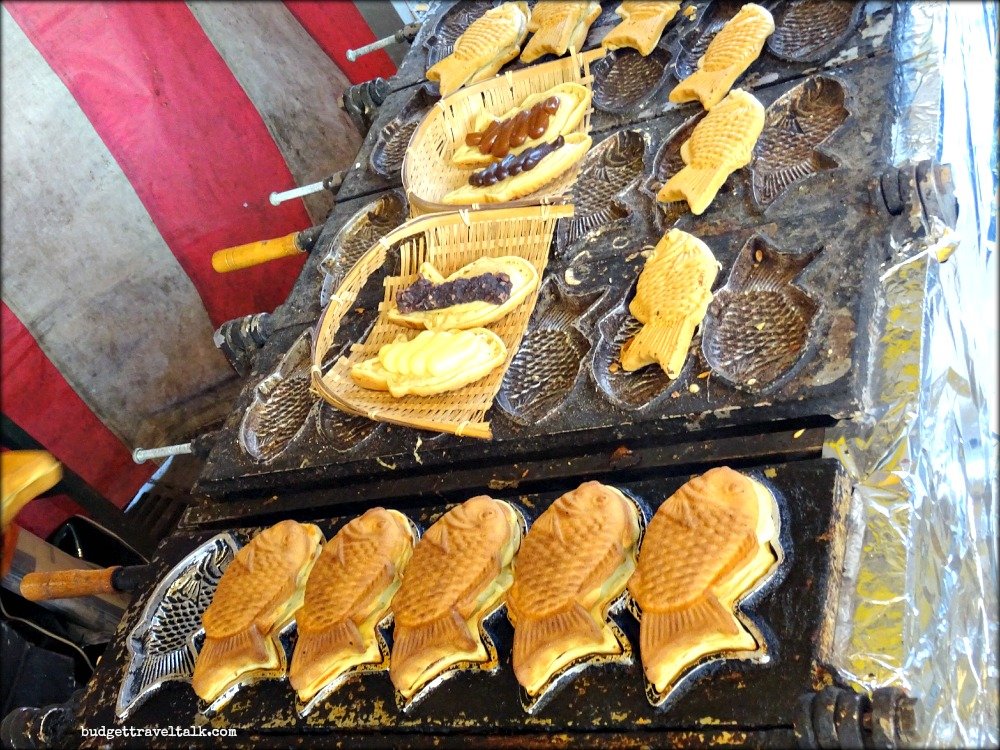 Inariyama, the mountain where the shrine rests, is the residence of Inari Okami, the deity of the Fushimi Inari Taisha.
Inari Okami took up residence here on the first Day of the Horse of the second month of 711. The 1300th anniversary was celebrated in 2011.

Inari Shrines have two distinct features. One is the ornage torii gates and the other is Kitsune (fox) statues. Inari means reaping the rice and as such, the god or deity in charge is of extreme importance to the Japanese people. The Kitsune is a messenger/ servant/attendant to the Inari God so they too are important. One line of thought is that rats eat rice and foxes eat rats, hence the importance of foxes.

Strangely, worshipers leave offerings of fried tofu for these mythical (carnivous) foxes. But cats like fish and yet are afraid of water, so I guess these carnivores just fancy some tofu!

Read more of our Japan Posts.

How to Get from Kyoto to Fushimi Inari Shrine

Public Transport is the best option due to congested car parking options.

Fushimi can be reached by JR Nara Line from Kyoto Train Station, 2nd stop – free with a JR Pass – the shrine is right beside the train station.

The Keihan Line also stops at Inari.  Their Fushimi stop is a little further away from Fushimi Inari Kyoto stop. Walk 5 minutes east.

The trip by car is 20 minutes from the Kyoto Minami Interchange on the Meishin Expressway.

Avoid the crowded 10 a.m. time-slot. If morning suits best arrive at 7 or 8 a.m. and in the afternoon time your visit to take in the sunset over Kyoto. Regardless of the time of day, continue walking on the path and the crowds soon drop off.

This post is linked to Corinne’s Reflections Enroute for Weekend Travel Inspiration.