You might say that our affinity with living near water meant we were destined to fall in love with Canakkale in North-Western Turkey, but as we drove north from Bozcaada Island, I found it was difficult to form a mental picture of the town.

It is situated on The Dardanelles otherwise known as Canakkale Strait – a natural waterway in North-West Turkey separating Asian and European Turkey. As soon as we set eyes on the Dardanelles waterfront in Canakkale we were smitten. I mean who doesn’t love a beautiful and intriguing waterfront!

We also loved the casual atmosphere and friendly locals of Canakkale. Being a student town it is affordable, with a lively atmosphere and a reputation as being a friendly party town.  Add a mix of mosques, hamams, museums and a thriving old town and the urban scales are perfectly balanced.

If you travel to Gallipoli be sure you to overnight at Canakkale.

Things to do in Canakkale

Australians are taught about the battle of Gallipoli during WWI as a significant part of our history and as Aussies we were on an Anzac pilgrimage of sorts to the Gallipoli Peninsula.

This particular Turkish road trip of ours began in Izmir, but Canakkale was the launching point to Gallipoli. It is also possible to drive from Istanbul to the Peninsula or arrange a tour from Istanbul.

The Gallipoli Peninsula is just west of Canakkale and it is a short trip on the “Gestas” Canakkale to Gallipoli Ferry.  Drive your car right on to the ferry and have a lovely day exploring the peninsula sights, returning to Canakkale in the evening.

The Gestas ferry cost is approx. 35TL each way.

Choose the Eceabat ferry (25 minute trip) if you’re wishing to visit only the Turkish, Australian or New Zealand memorials.

From the town of Eceabat cut across the peninsula to the Çanakkale Epic Presentation Center to collect some maps and information before taking the loop road around the memorial sites. The route is one way and takes about an hour with a few stops.

Hang out on the Kordon

The promenade, is known as the kordon in Turkey and here in Canakkale it is the place to relax with the locals, catch sunset views over the Gallipoli Peninsula.

Corn on the cob is BBQ’d and sold from quaint stalls and everyone is out for a stroll.

As evening approaches crowds form around a girls boxing competition, or a group of whirling dervishes.

In Turkey, you will find outdoor teahouses where in other countries you might find beer gardens. In Canakkale, these teahouses are strung out along the kordon and they are packed with customers.

Watch a Red Sunset over Gallipoli

The tea gardens of the kordon are prime position for a Sunset Gallipoli style and seating is at a premium so arrive early.

Watch the Fishermen sell their catch of the day

Individual fishermen display their meagre catch on the kordon and hopeful housewives come looking to buy. Looking over the edge into the clear waters of the strait we saw multitudes of tiny bait fish. 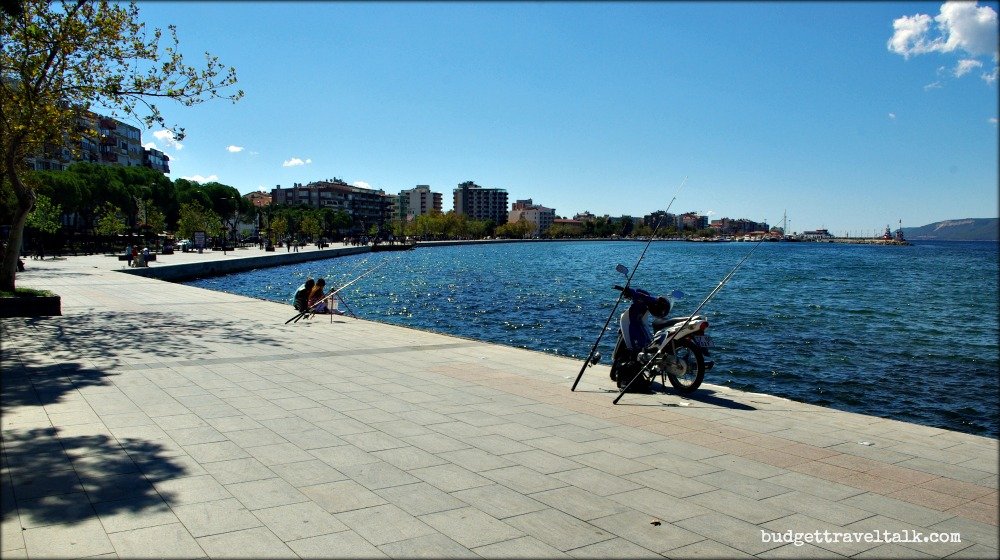 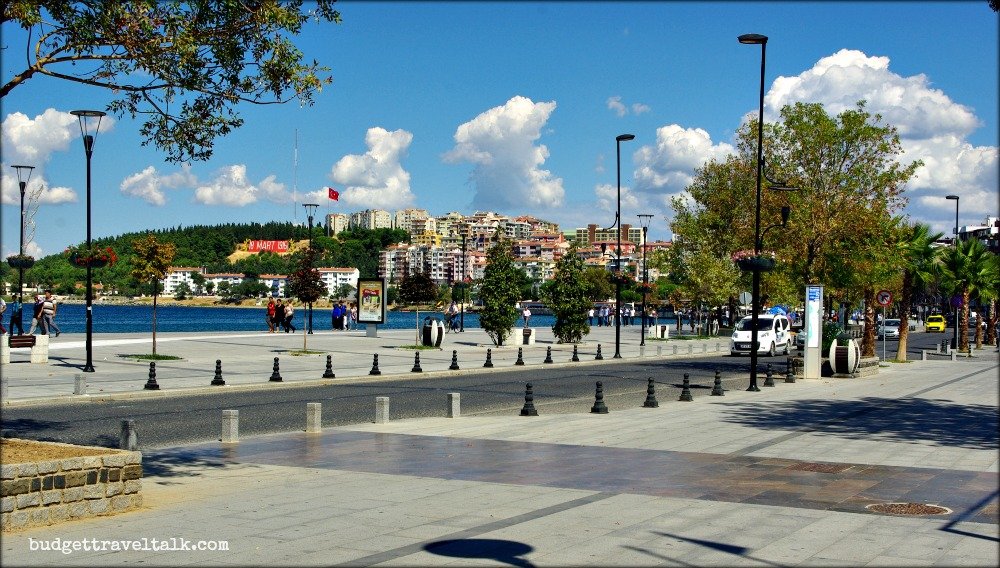 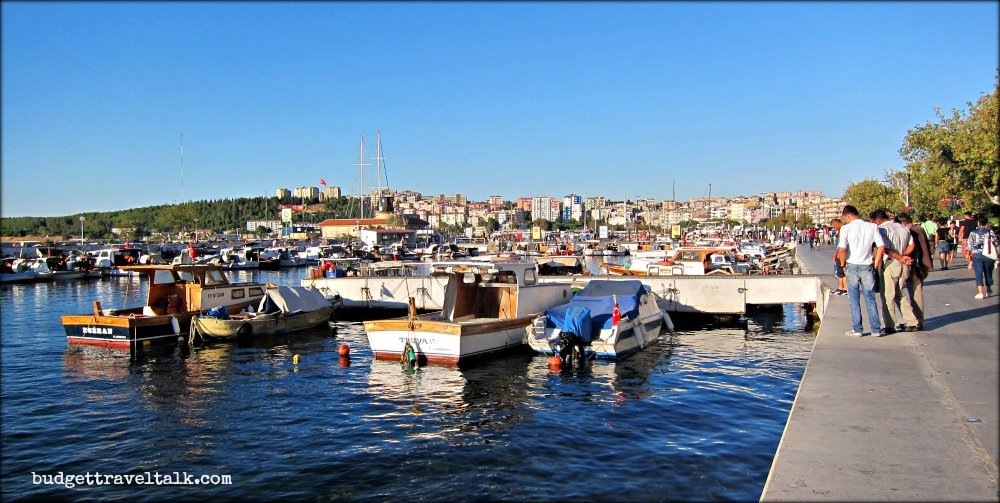 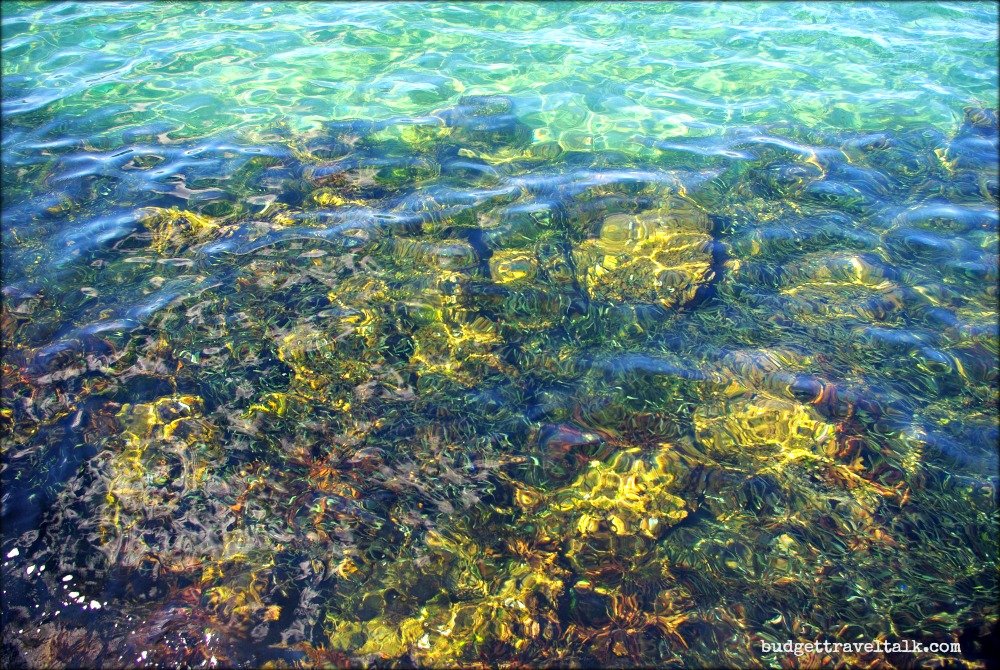 Where to eat and an Ottoman Clock Tower

Haylaz Bey Doner restaurant at Saat Kulesi Meydani Barlar Sok No. 8, has cheap and tasty food, and as we were soon to discover, spans two streets.

Entering through the front door we ordered our meals and then were shown through to the back lane that doubled as an outdoor eating area.

As we ate our chicken, salad and flat bread dressed with doner juices, we enjoyed a first class view of the five storey Ottoman clock tower (1897). 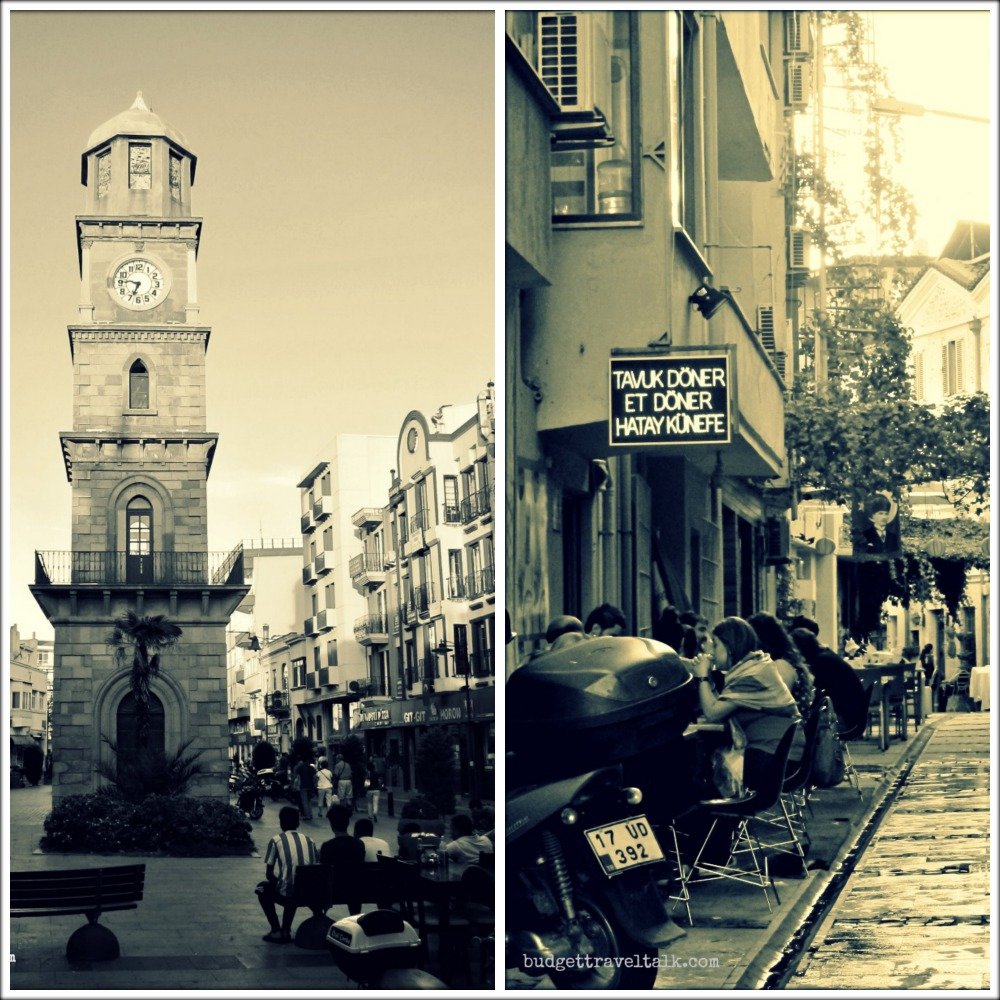 Find the Statue of the Canakkale Pot

This statue is a replica of the strange looking pot that Canakkale was famous for in the 19th Century.  It is evidently making a comeback! 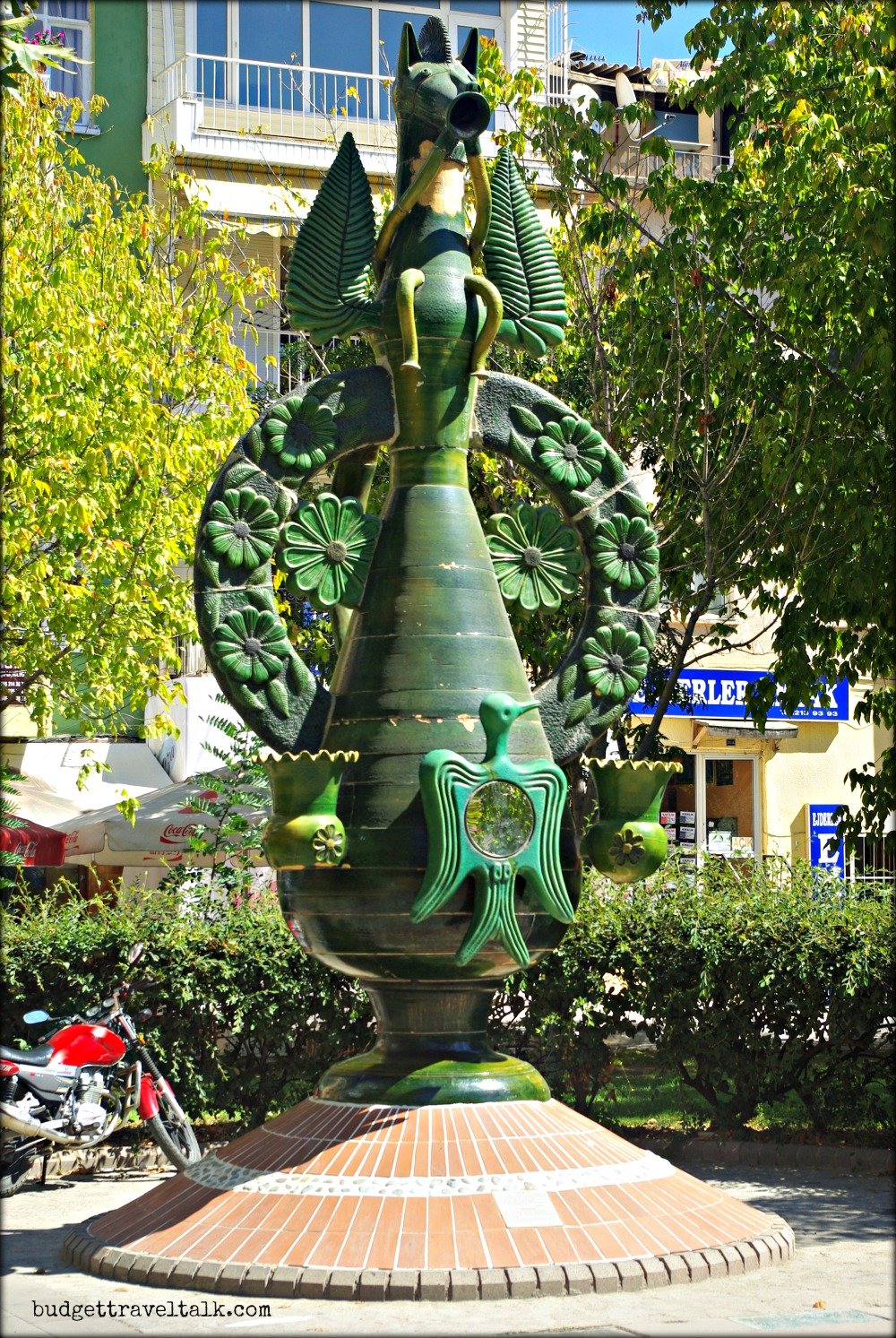 Cimenlik Fort was unfortunately closed during our visit but a walk along the path toward the fort revealed an interesting collection of war memorabilia. 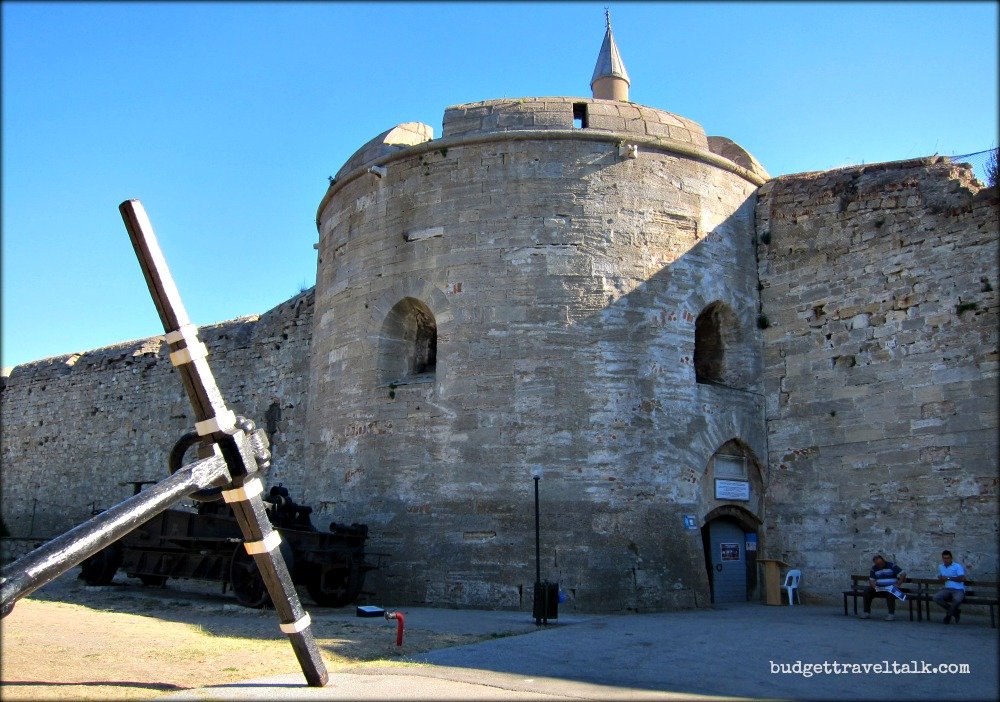 There was also a Military Museum in the park and a replica of the Nusrat minelayer floating nearby. 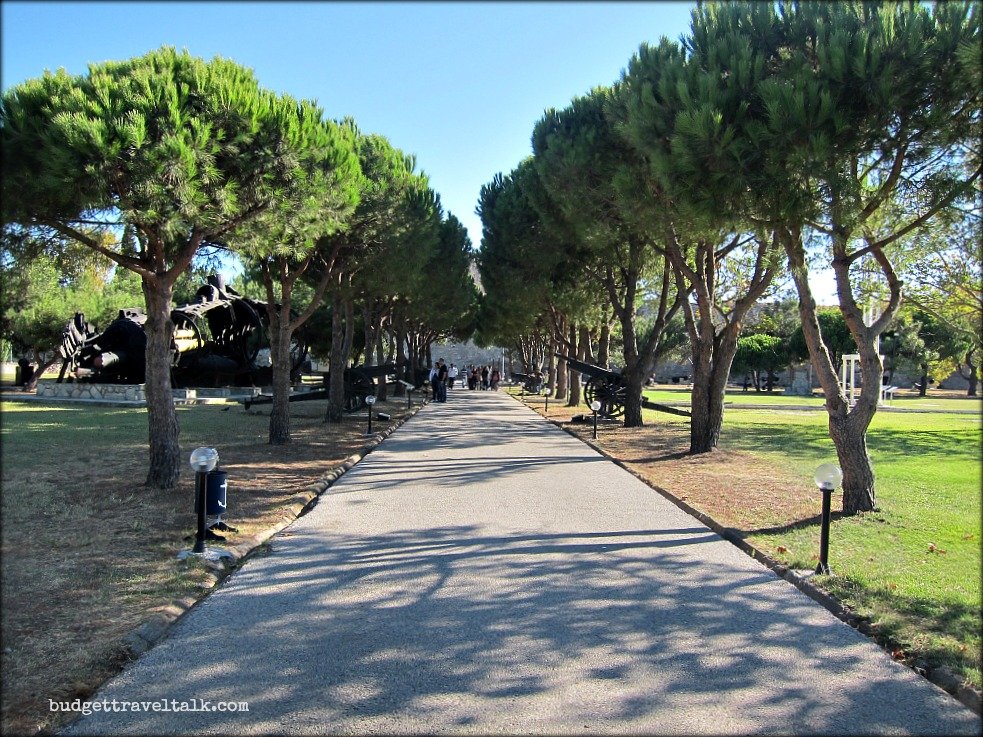 The Cats of Canakkale

In Turkey everyone takes care of the roaming cats. The Fishermen here shared their daily catch and the cats were a content healthy looking bunch that treated the kordon as their home.

These shiny coated cats were enjoying the attention of an admirer. 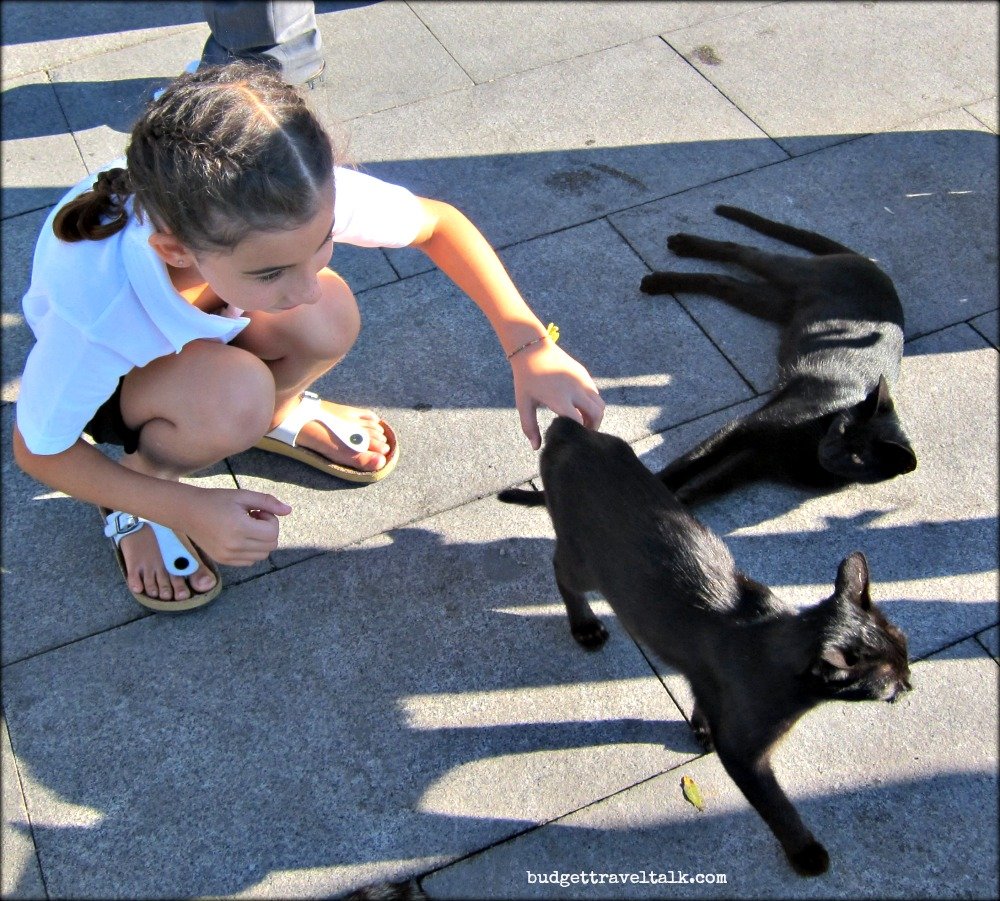 Watching the sunset from a Canakkale tea house. 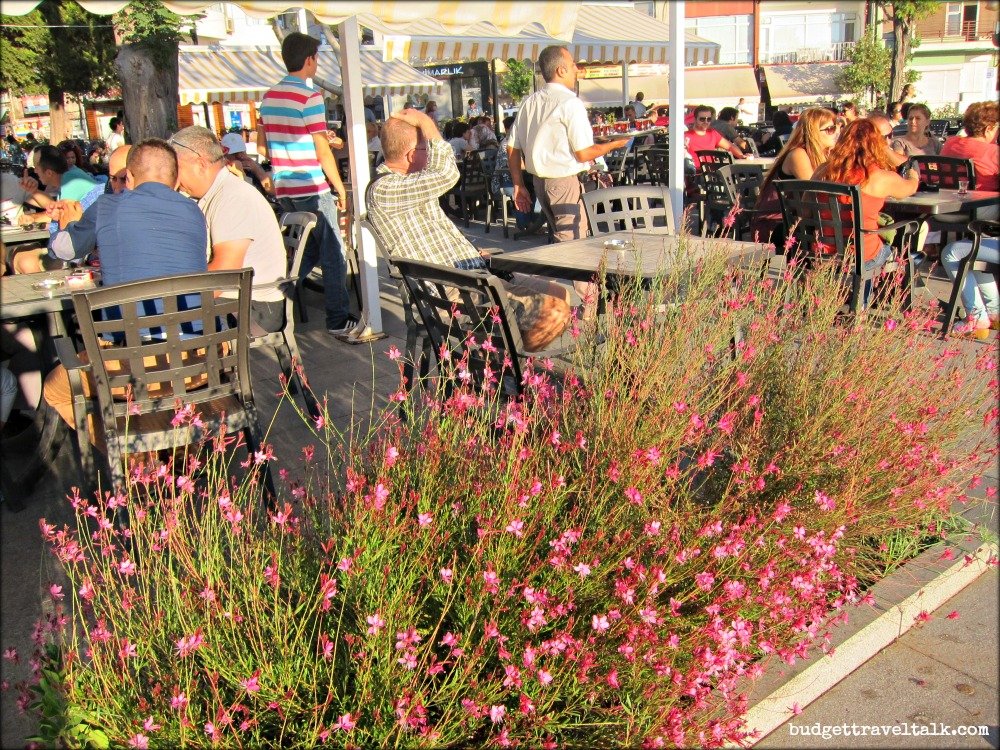 Whirling dervishes waiting to perform on the kordon. 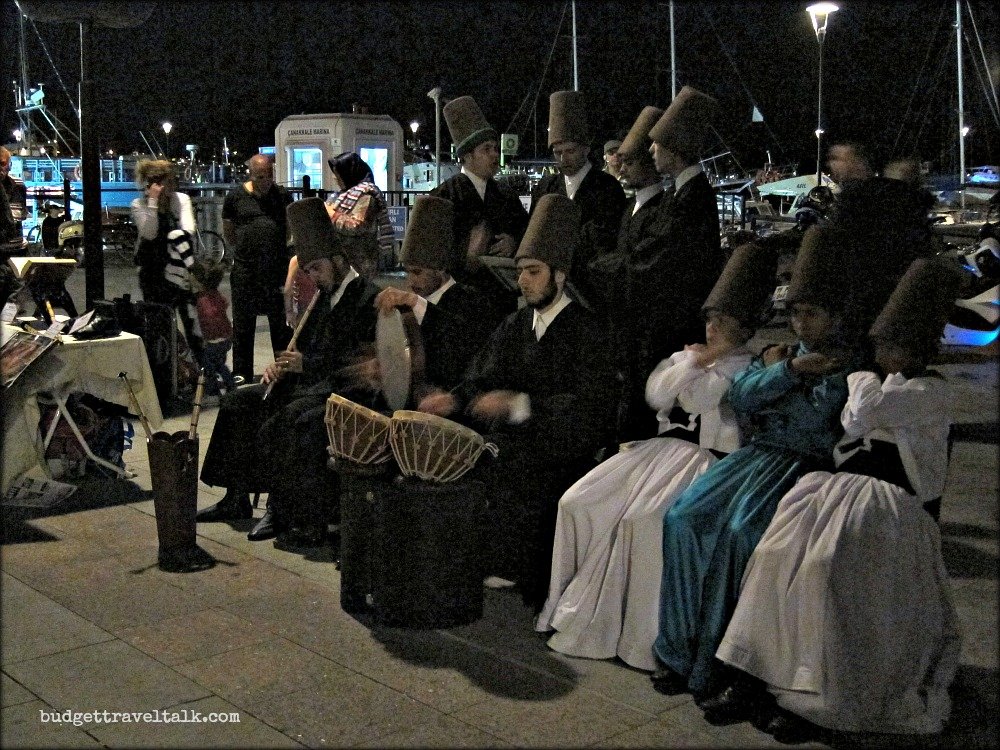 Since 2004 the Trojan Horse from the movie Troy has drawn the crowds.  Standing at it’s base and looking up it an inspiring sight.

The distance from Canakkale to Troy (the actual site of Troy) is 36 km but you won’t find the Trojan horse there. Seeing the Trojan Horse from the movie is on the other hand easy and very impressive.

The ruins of Pergamon at Bergama (224 km) south are indeed worth visiting. 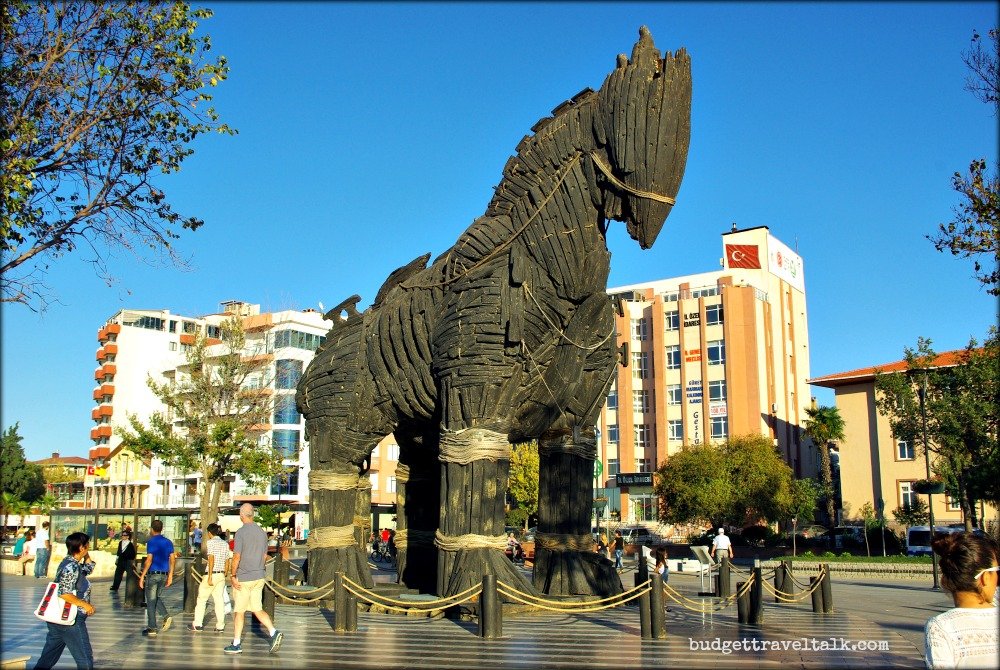 Our rental vehicle refused to start and we were forced to stay another day – sometimes we are so lucky. Having some unexpected free time, I scraped up the courage to take my first Turkish Bath. There are separate male and female hamams in the town centre and my visit to the everyday local women’s hamam was much cheaper and authentic than some touristic places in Istanbul.

Where to Stay in Canakkale

We stayed at Grand Anzac and an extra night at Kervansaray. Kervansaray is a classic ottoman greek building and worthwhile staying in if you are interested in architecture.

Also owned by the same group is Anzac House Hostel. Once you have booked into any one of these, management can usually find you a last minute room for the next night. The staff at Grand Anzac were exceptional, helping us sort out a replacement hire car when ours wouldn’t start – and the buffet breakfast was pretty amazing.

The C is pronounced CH. This is how to say the whole work “Cha-knock-ka-lay”.

Read about our list of things to do in Istanbul here.

Get your travel inspiration from Nancie’s Budget Travelers Sandbox at TRAVEL PHOTO THURSDAY.

Tuesday in Townsville at the 2014 Glencore Greek Fest
Next Post: The Thrill of Discovery at the ruins of Alexandria Troas Turkey