The most southern region of Croatia’s coastline holds the stunning Dalmatian coast with the glittering islands near Split Croatia off-shore. Croatians love sun, beaches and swimming and gravitate to the ocean whenever they can. Some visitors treat Split as a mere stepping off point for the islands, but it is a beautiful and exciting town in it’s own right. One of the best things to do in Split, is exploring Split Croatia Beaches both on foot (to Bacvice Beach) or cycling around the seaside peninsula park known as Marjan Split Croatia.

Split is one of the best places to stay in Croatia. It is famous for the historical but liveable Diocletian’s Palace and the islands near Split Croatia, namely Brac, Vis and Hvar. It is easily accessible from Zagreb by train (6 hours) and bus (5 hours), flights to Split land at Split Airport (Resnik SPU close to Trogir) or Zadar 150 km N-W. Personally I love the idea of arriving by Blue Line Ferry from Ancona in Italy too although it is a little pricey.

Another great idea is to rent a car in Split and drive the spectacular coast road to Dubrovnik or Bosnia as we did using Last Minute Car Hire in Split, but I am getting ahead of myself.

Air temperatures are warm in early June, but coming from the north of Australia, we found the water borderline cold. Water temperature Split Croatia averages are May 18ºc, Jun 22ºc, Jul 24ºc, Aug 25ºc, Sep 23ºc. That sounds quite good on paper but doesn’t feel so in real life.

I don’t think others shared our opinion though as there were crowds of people swimming and beaching at Bacvice – the closest beach to our Airbnb house and to Split.

Bacvice is a sand beach and only a 10 minute walk south-east of Split CBD. The sand extends out into the water enabling the game of Picigin to be played in the shallows. If you’ve ever had pebbles beneath foot when swimming you know what I mean. This game originated in Bacvice. The idea is to keep the ball out of the water with acrobatic volleyball like moves. The ball, usually a peeled tennis ball is batted around by hand.

Bacvice is known for beach discos, cafe/bars (like the popular Zbirac) and the Split beach festival in early August.

A further 3km south is Trstenik Beach popular with families due to accessibility and facilities for kids and just a little further the busier Znanj Beach. But they weren’t located in the direction we were headed. 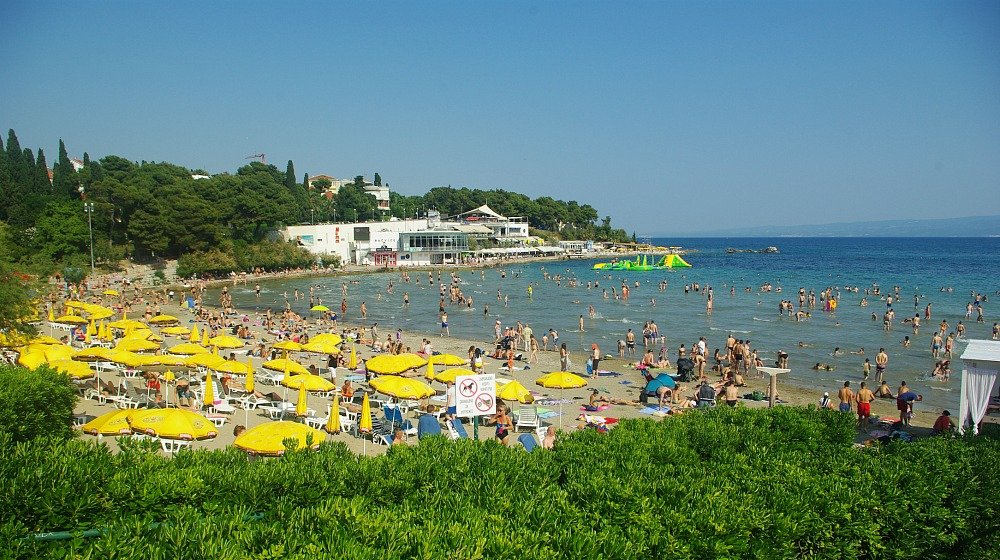 Beach goers don’t confine themselves to the sandy beach at Bacvice, but spread out along the concrete as far as the rocks on the point. 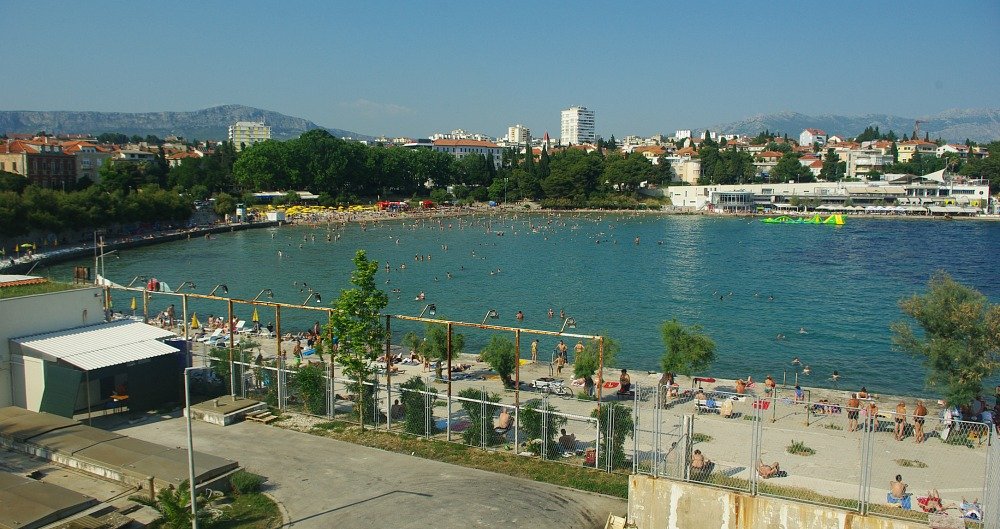 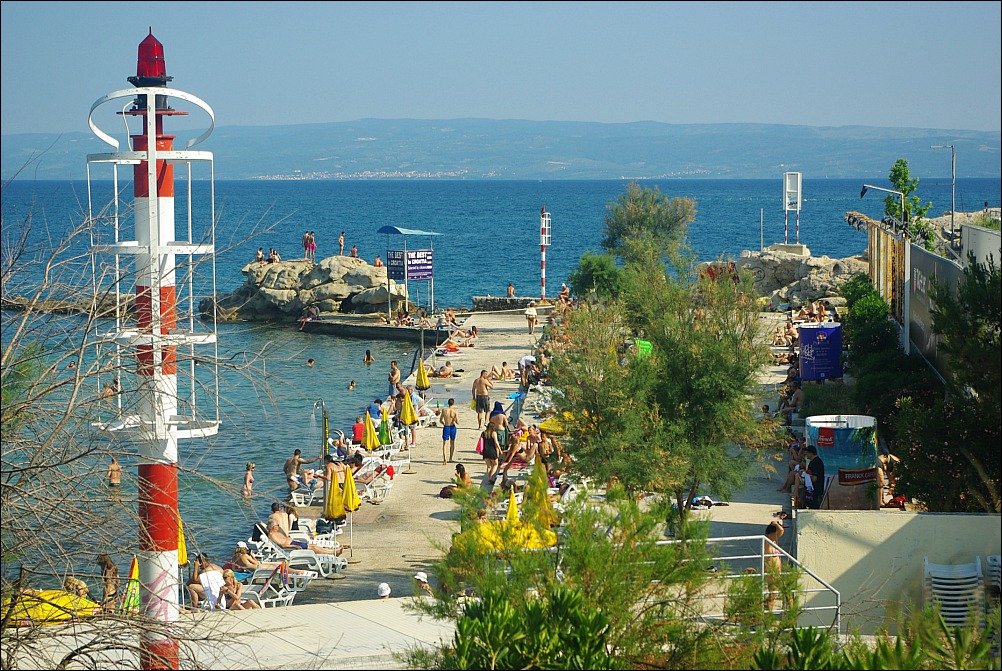 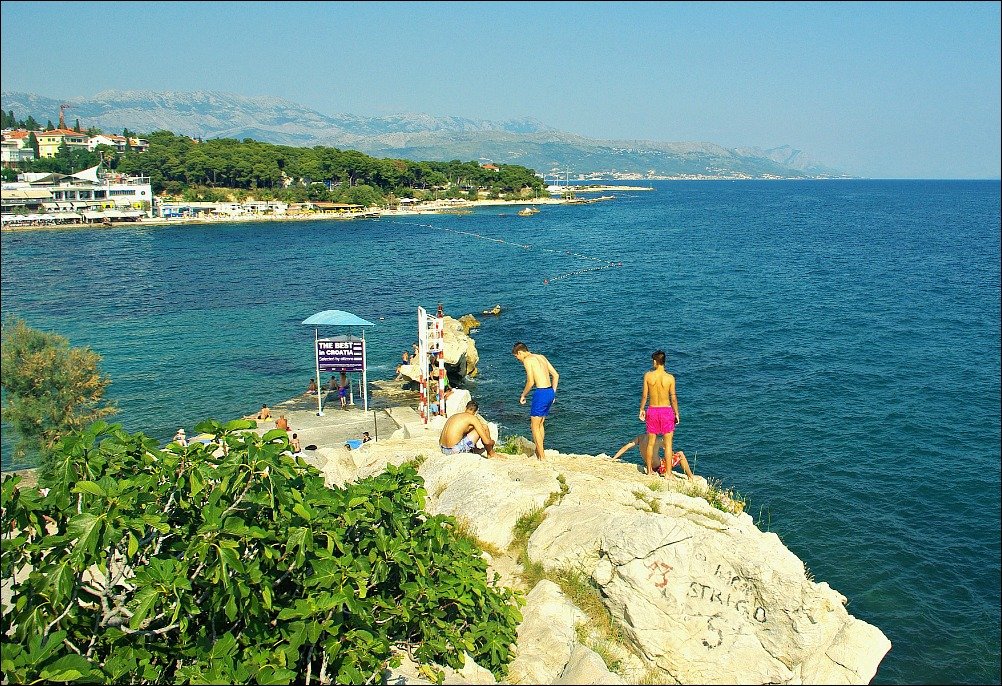 Having checked out Bacvice take Katalinicev Prilaz (road) toward the Port from where the large ferries depart to the islands. Follow the map below and tick off some sights along the way.

The Venetian look of this house reminds of how close Croatia is to Italy and that Split was actually a Venetian City 1420 – 1797. 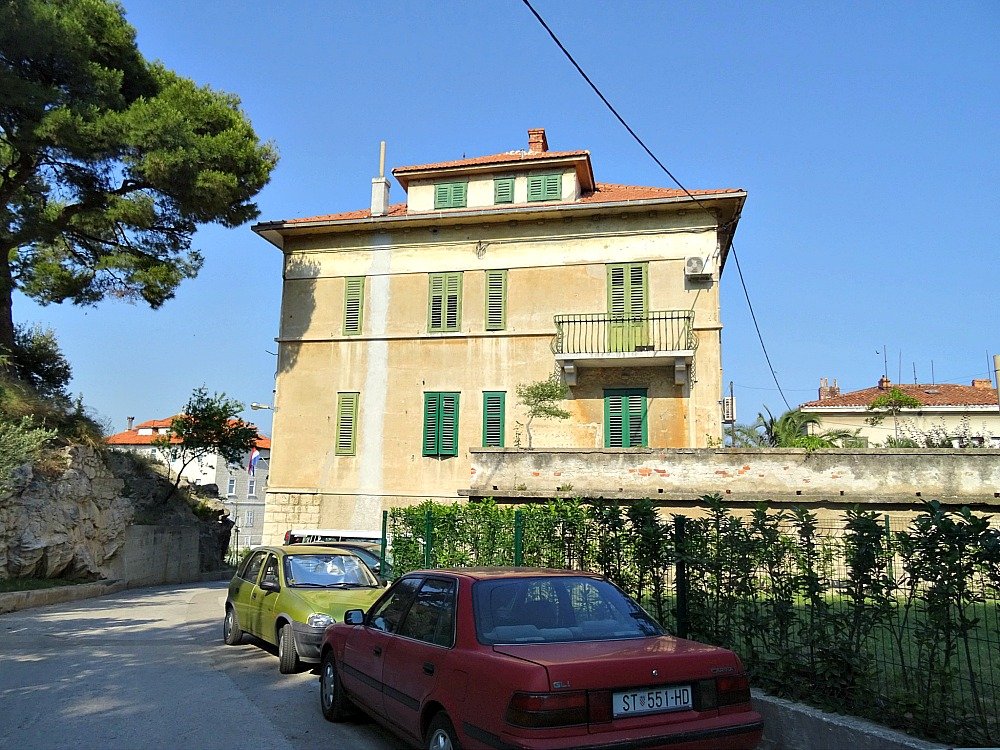 Jadrolinija Split to Vis ferry is the one on the right.

Tip. Purchase your ferry ticket at the port office opposite the train station and to the front of the boat, the day before departure. Ask the name and location of the boat, so that on the day you can board without lining up again for the information. 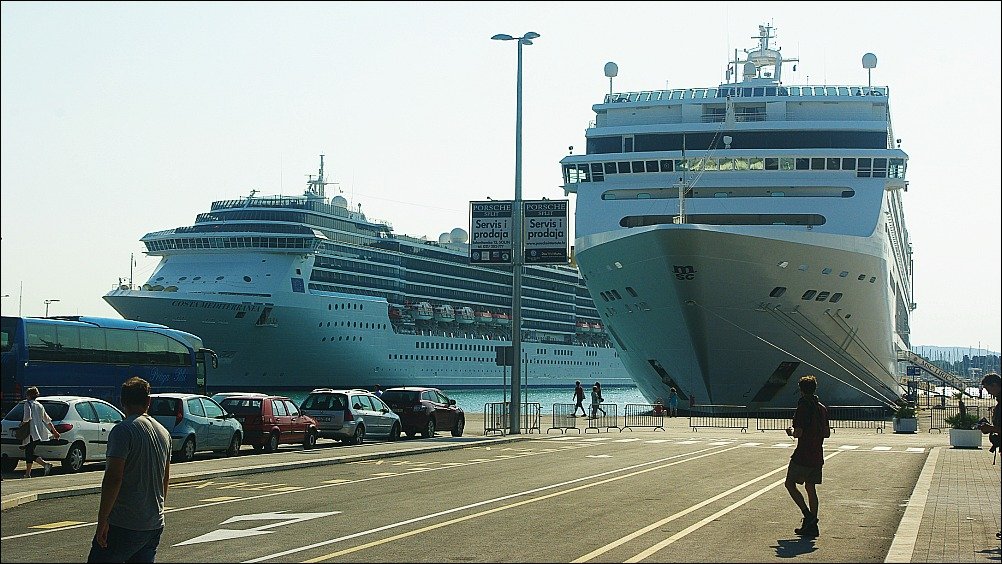 The train station is opposite the port where the boats depart for the islands. This is where trains from Zagreb arrive.

On arrival in Split we dropped our “Enterprise” Rental Car off in front of the train station in a tangle of tourist offices and car rental places. It took the help of our Airbnb host to locate the correct desk in a tourist booking office. Have I mentioned before that Airbnb hosts are wonderful ambassadors.

After passing port and station take a left onto the Riva or ocean promenade. We just love Rivas and Split might have the most polished one ever with it’s Spring flowering pots, park benches and permanent avenue of palms. 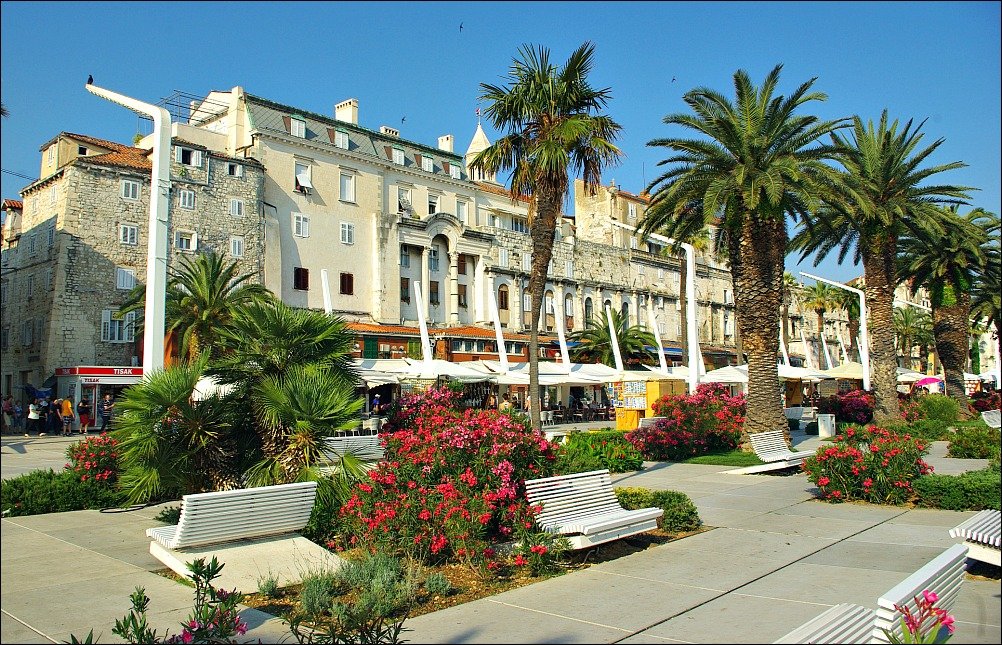 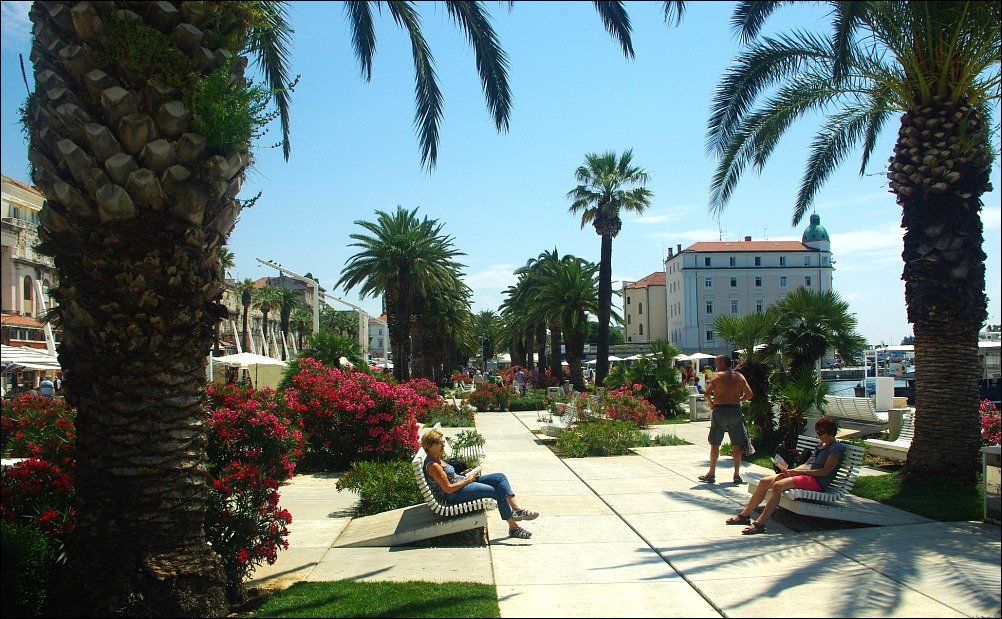 Tucked away behind the shops and cafes that front the Riva is Diocletian’s Palace, an accommodation and business sector at home within the ancient Palace Walls. This sneak preview is of the bell tower of St. Domnius through an arch in the Palace Walls. 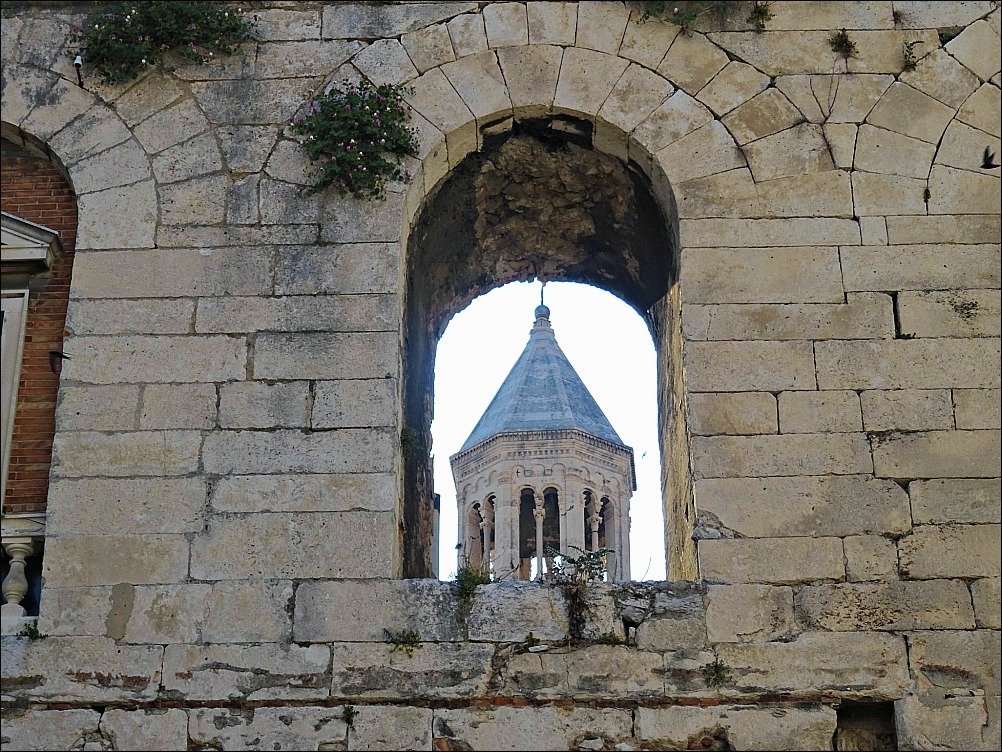 Marjan is a hilly park surrounded by the ocean on three sides and the town of Split on the fourth. It is mostly dense Mediterranean Pine forest but there are trails and 314 steps to Telegrin Peak or there are hidden churches to visit, but we are following the coastline as closely as possible to explore the bays and beaches.

Rent a Bike from near the small boat harbour at Baracuda, Trumbićeva obala 13, 2100 Split, Croatia – 80 kuna for 4 hours. We checked prices with another rental place along the Riva and Baracuda was a little cheaper and their service was good. They have a website with contact details and booking forms but we just walked in off the street.

For some reason Google thinks this route can not be done by bicycle but I assure you it is.

This Map shows the cycle route through Marjan Split Croatia.

First up we rode past this swanky Marine fuel station. 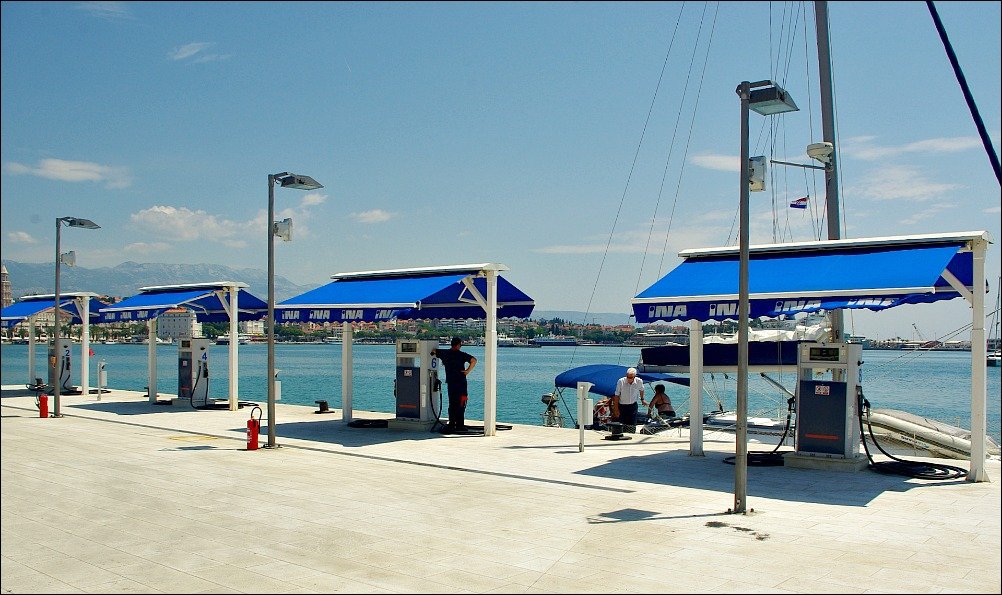 And cycled through the park. 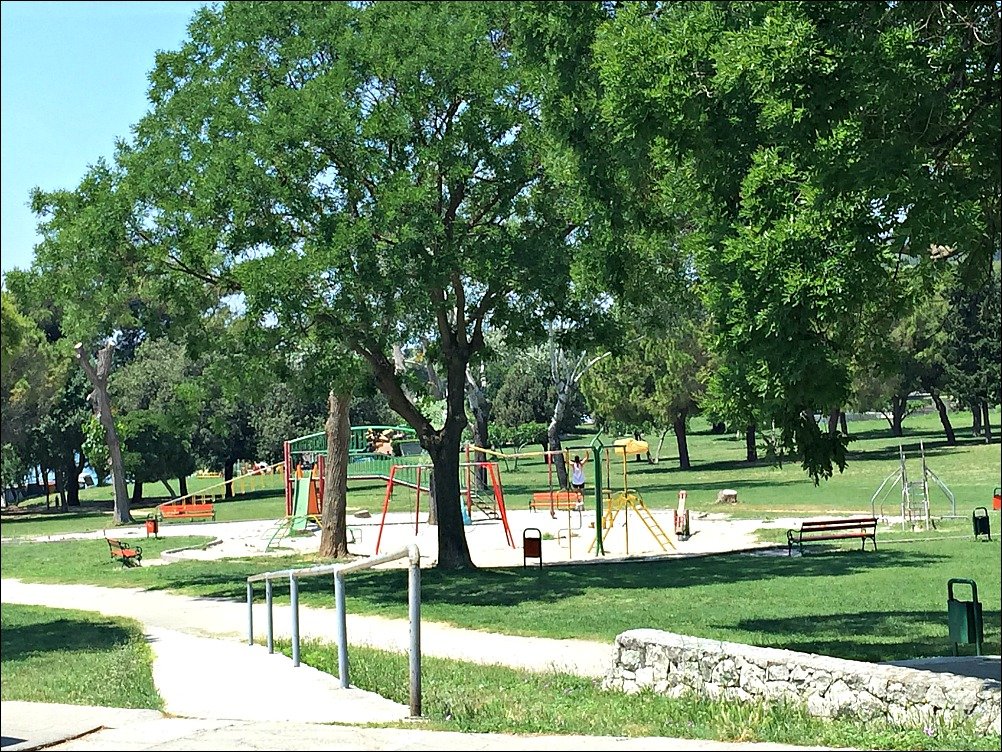 Jadran Swim Pool Split Croatia. In front of these seats is an unseen swimming pool where the Croatian Water Polo team once practiced, now it forms part of the Jadran Hotel complex.

Swimming is possible anywhere along this path. 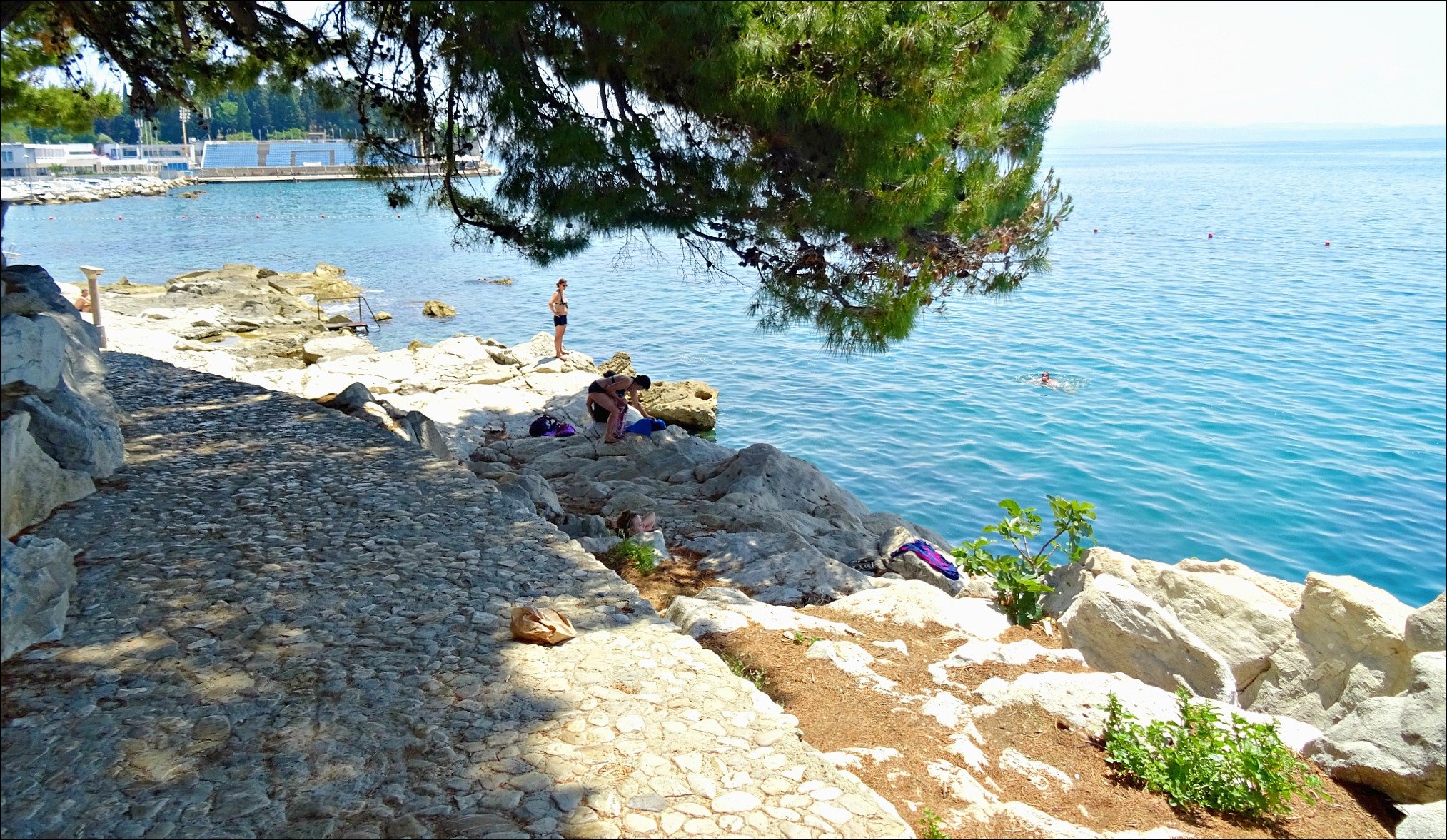 Somewhere around here the little coastal path finished and we took to the road – staying with the lower road the whole way around the park.

Looking back to Jadran pool complex. 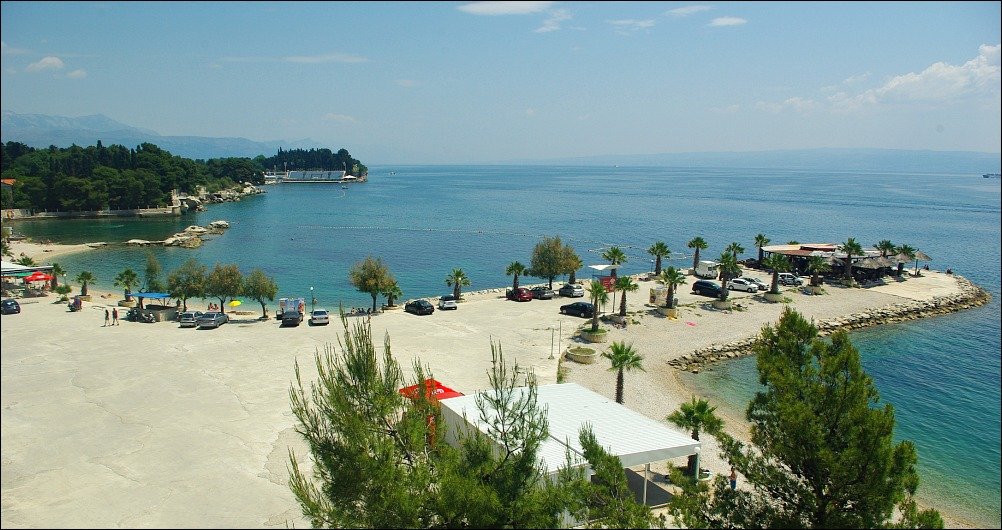 At the top of the access road was a door to nowhere. 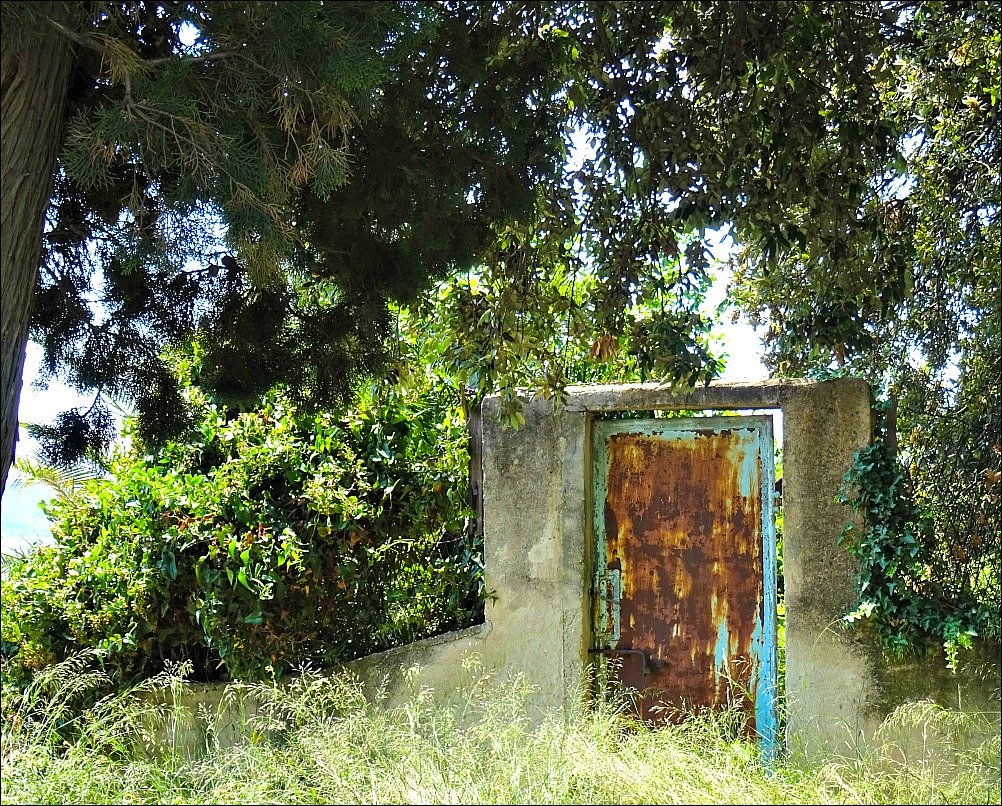 Down, down from Šetalište Ivana Meštrovića (road) to Kasjuni beach. It was too steep for me to ride my bike on the way back up! Kasjuni is a great beach. The water is crystal clear because of it’s pebbly bottom. There isn’t any natural shade but in summer sun lounges can be hired for 100 kuna and four poster beds for 500 kuna. b.y.o. towels. 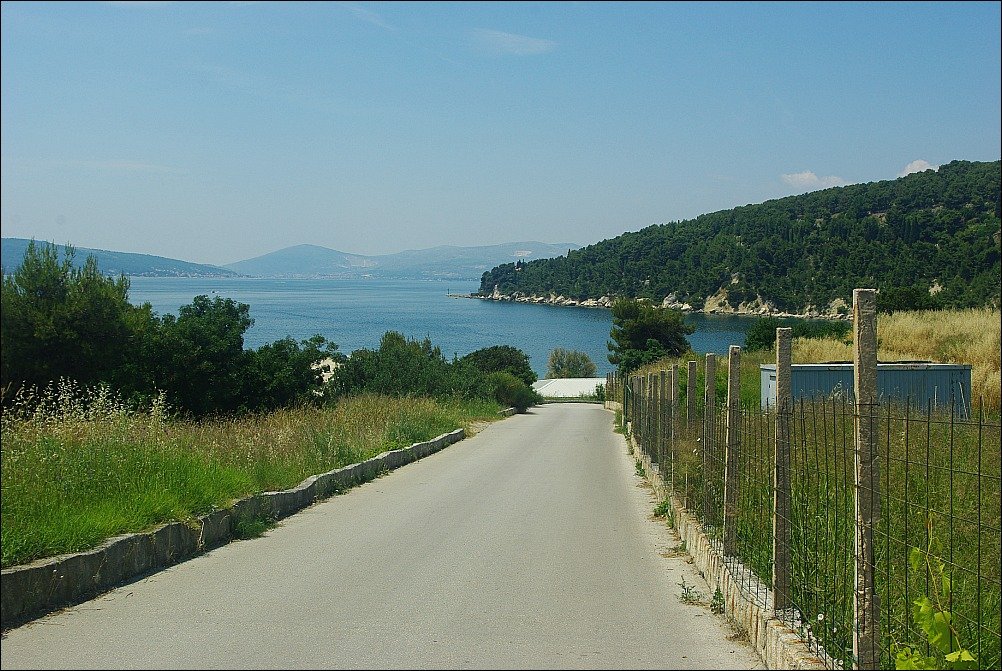 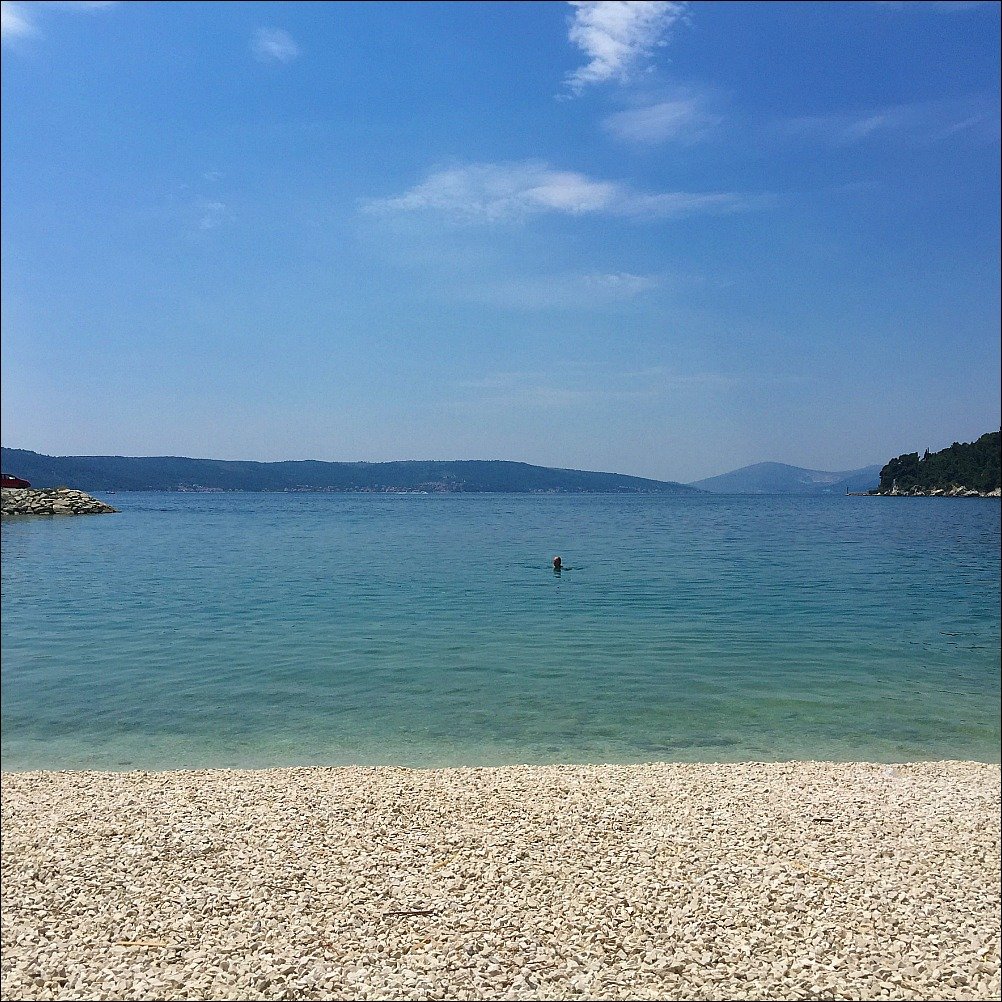 There is a casual beach bar overlooking Kasjuni beach selling beers, coffee (when the machine works) and ice-creams. 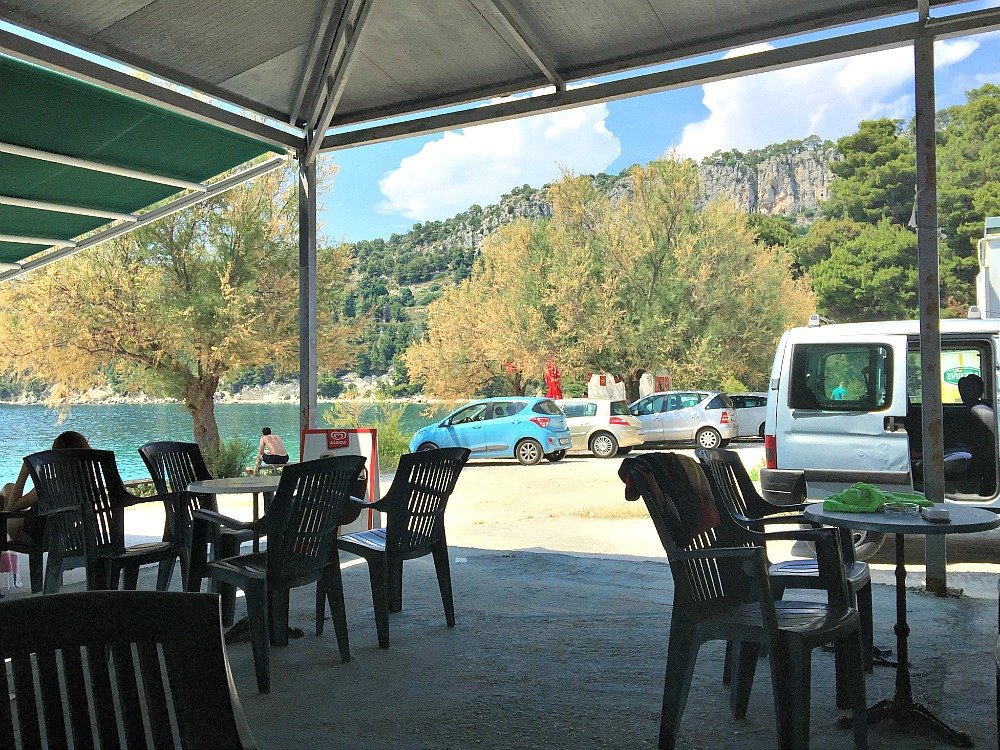 Back on our bicycles, even the low coastal road climbed quite high with views back to Kasjuni Beach. 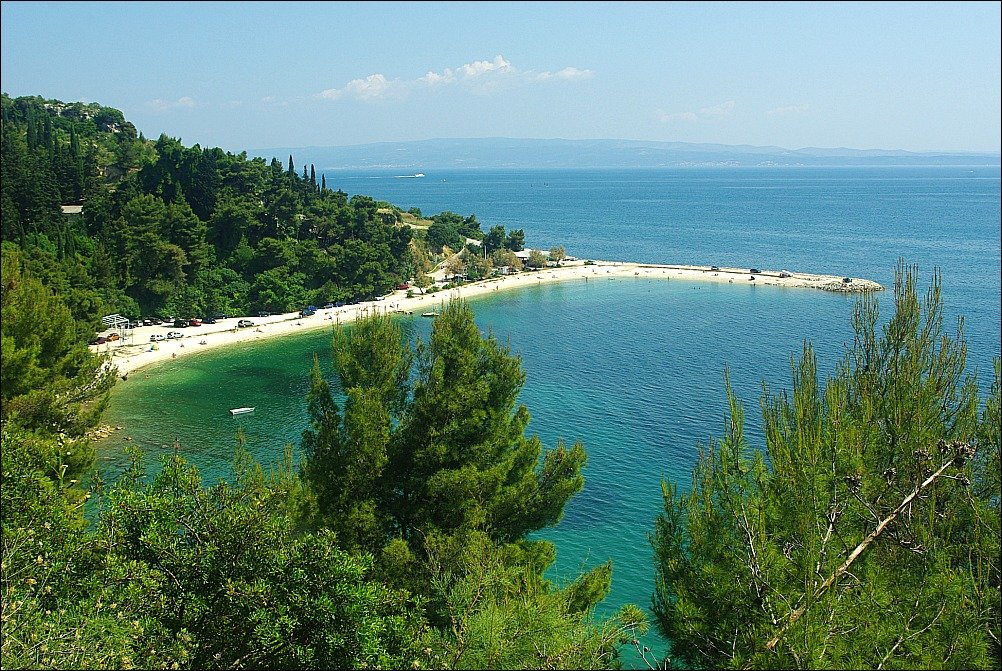 We’ve turned the corner and are now on the northern side of Marjan Park and it’s all downhill. 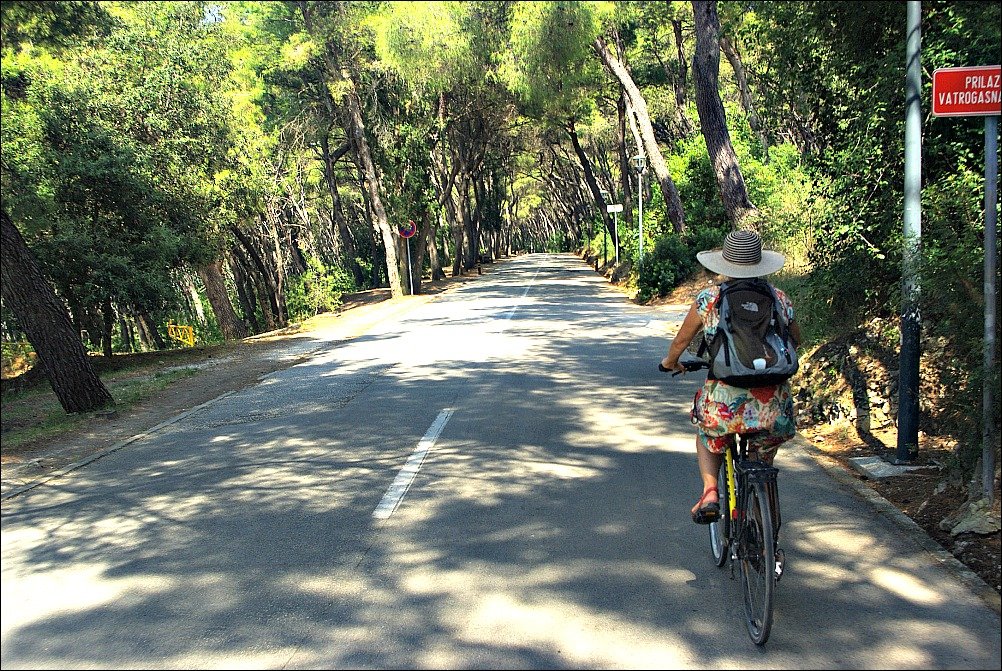 Wheelchair friendly entrance and the view is toward Bene Beach, our next stop. 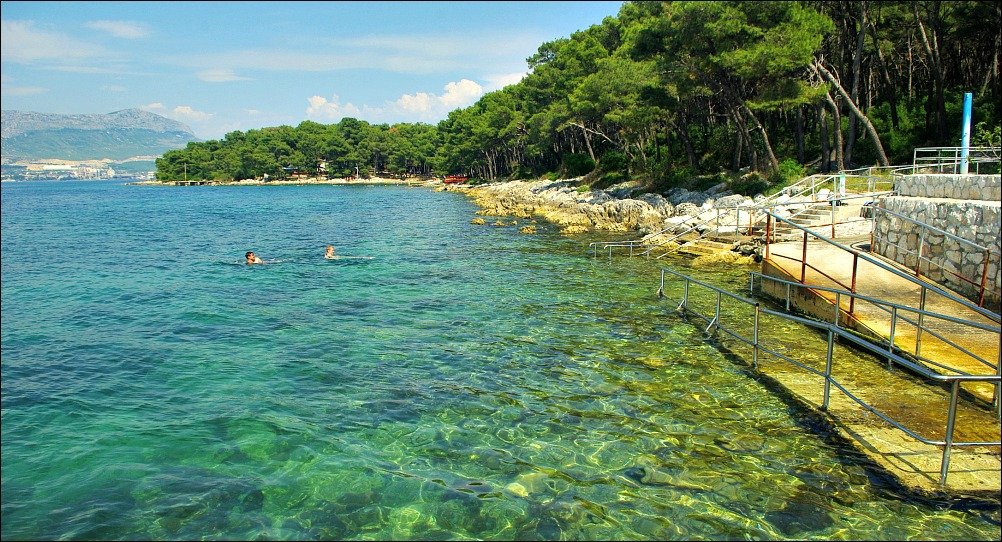 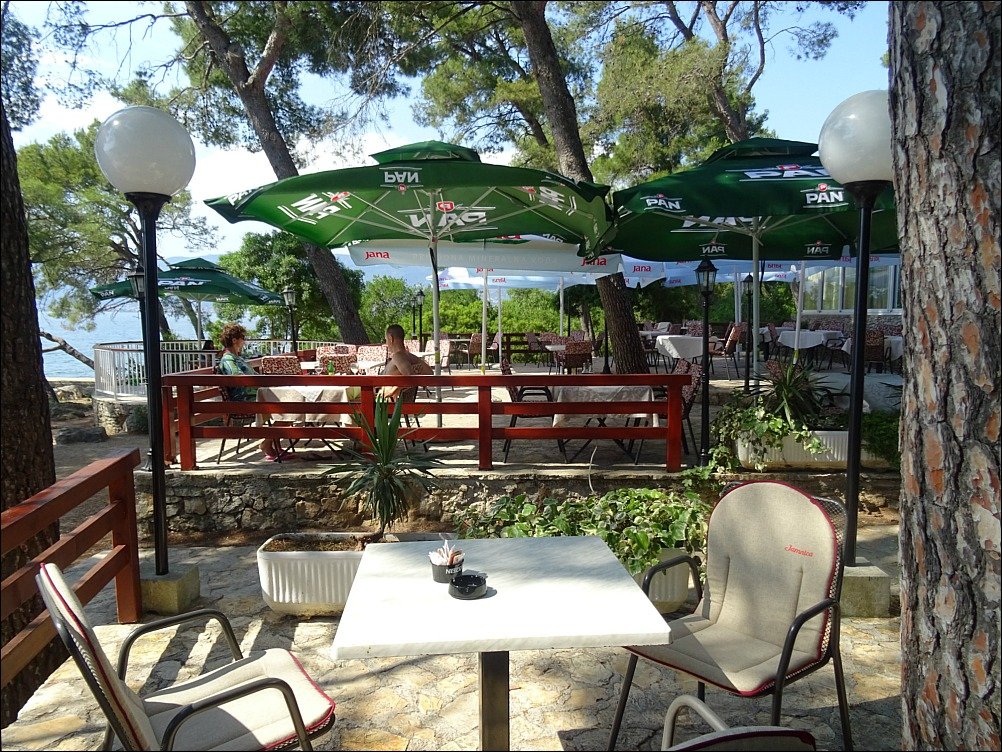 Bene Beach is a stone beach with rocky outcrops that are popular for stretching out on with a towel. 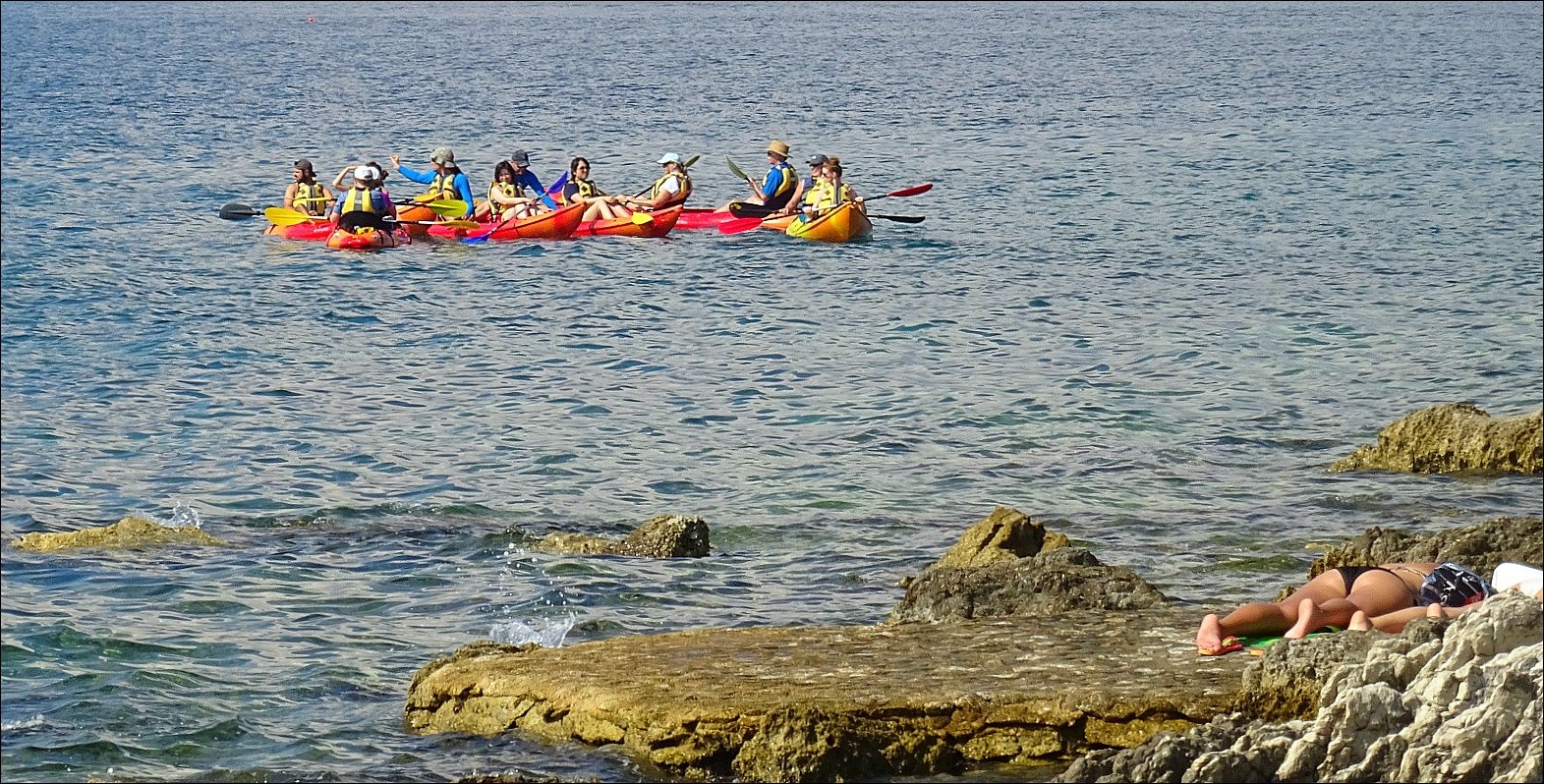 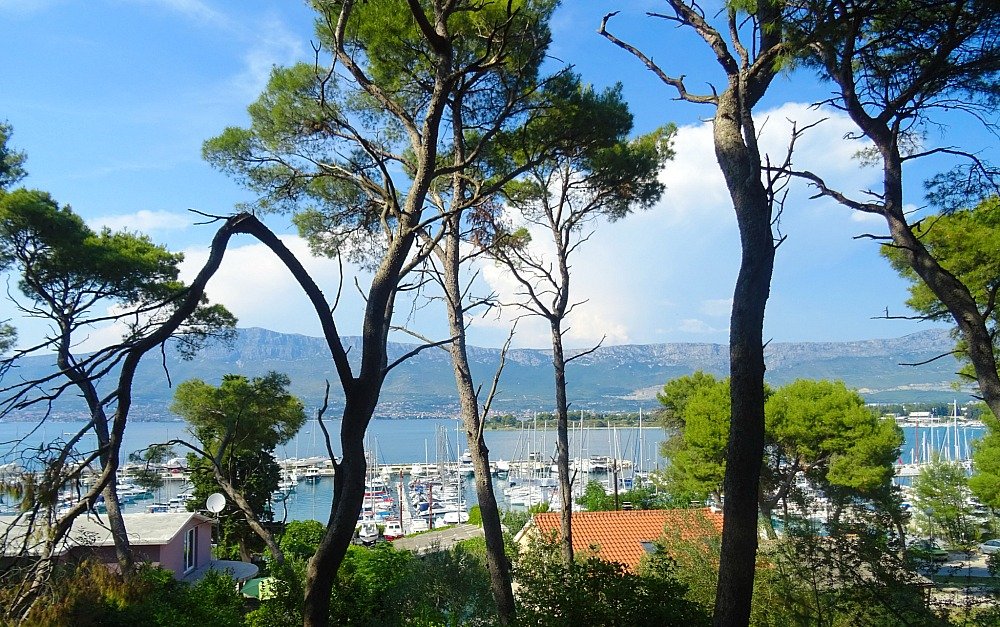 This is where we leave the park and cut back through the streets.

It is possible to arrive at this gate by bus from Split and walk into Bene Beach. 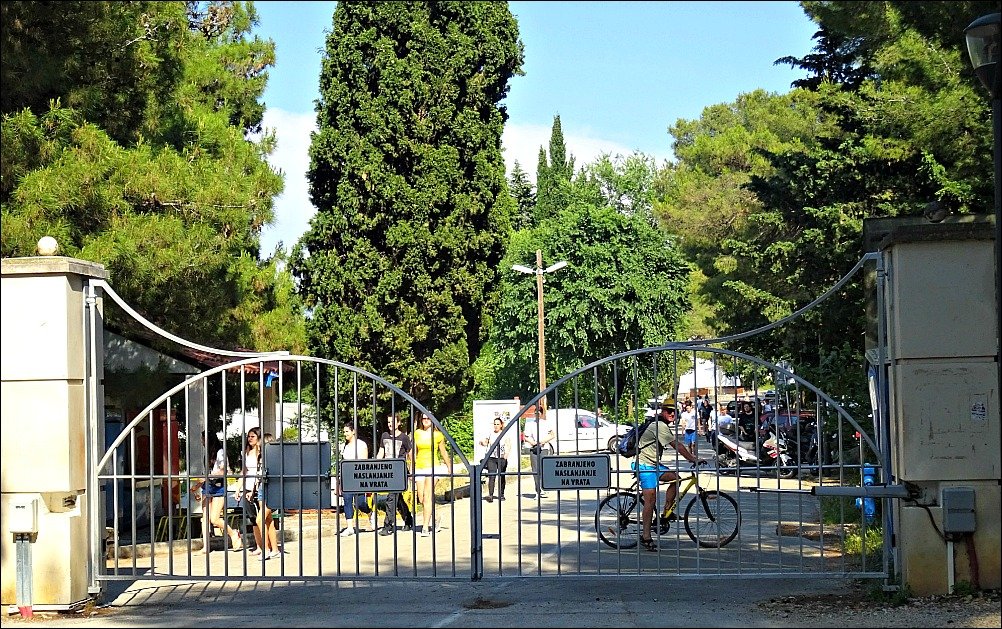 Finish the loop back at the starting point at Matejuška Small Boat Harbour on the western end of the Riva. 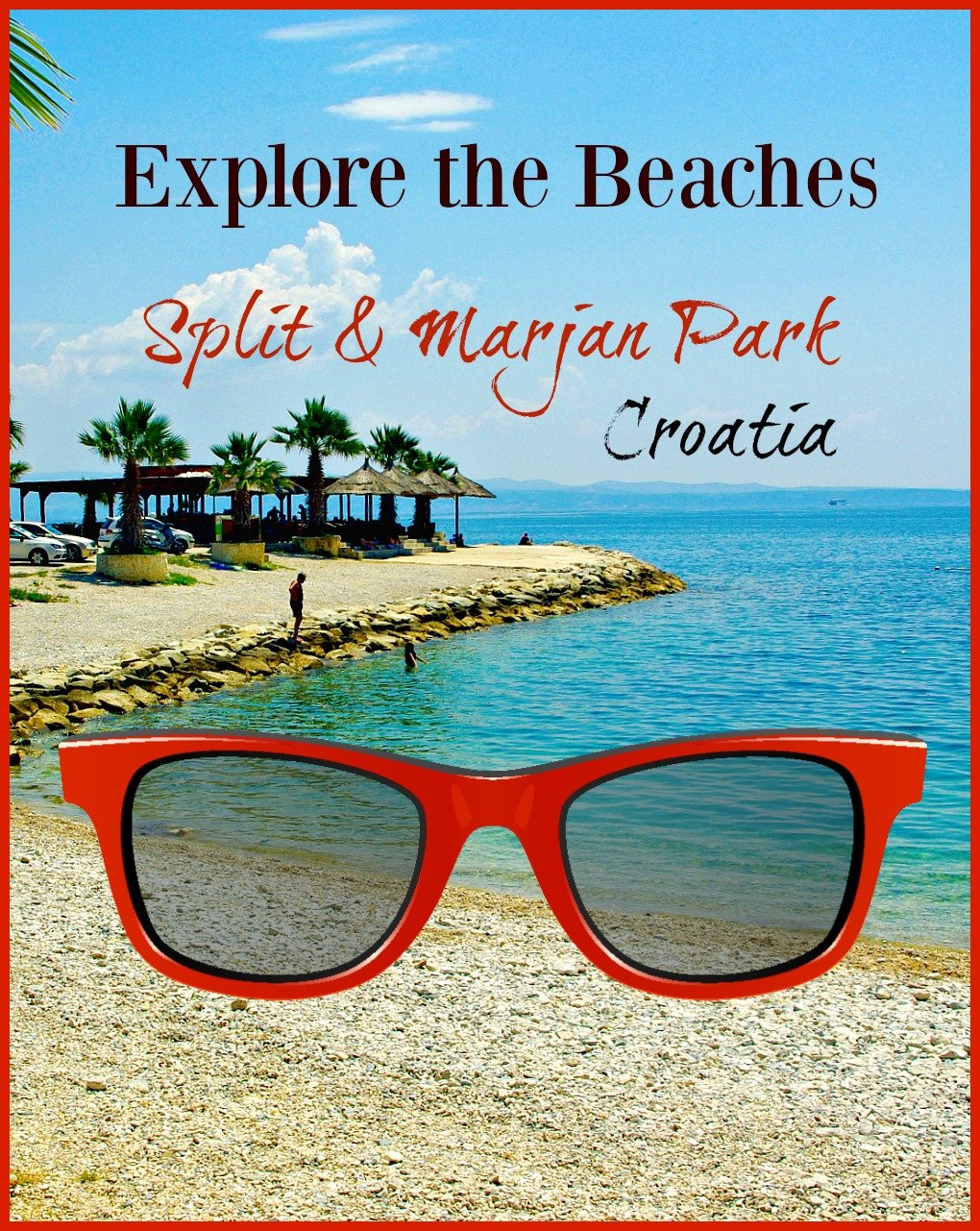 There may be sea urchins so it’s a good idea to wear water shoes. We purchased a pair on Vis Island and wore them everywhere when swimming in Croatia. Locals are mostly blase about sea urchins, but if you like us are not savvy about them I recommend buying shoes. Standing on an urchin with bare feet can result in forty or more spines in a very painful foot. In the north of Australia we tend to be blase about marine stingers and crocodiles but we have been brought up learning how to survive them. We are not experienced in avoiding sea urchins.

While none of the beaches in Split or in the close vicinity are likely contenders for a best beaches in Croatia list, they are free and clean, with sparkling water. When temperatures soar and a trip to the islands is not possible, the Split beaches we’ve mentioned provide a pleasant reprieve.

Read more of our Croatian posts.

Krka Versus Plitvice Lakes National Park Croatia
Next Post: Cheap and Free Things to do in Split Croatia