Kars is one Turkish Town that I would definitely like to know better.  This once upon a time Armenian and Russian held town, seemed a little wild at first (we later found it calmed down drastically at night) and the people looked full of character and purpose. 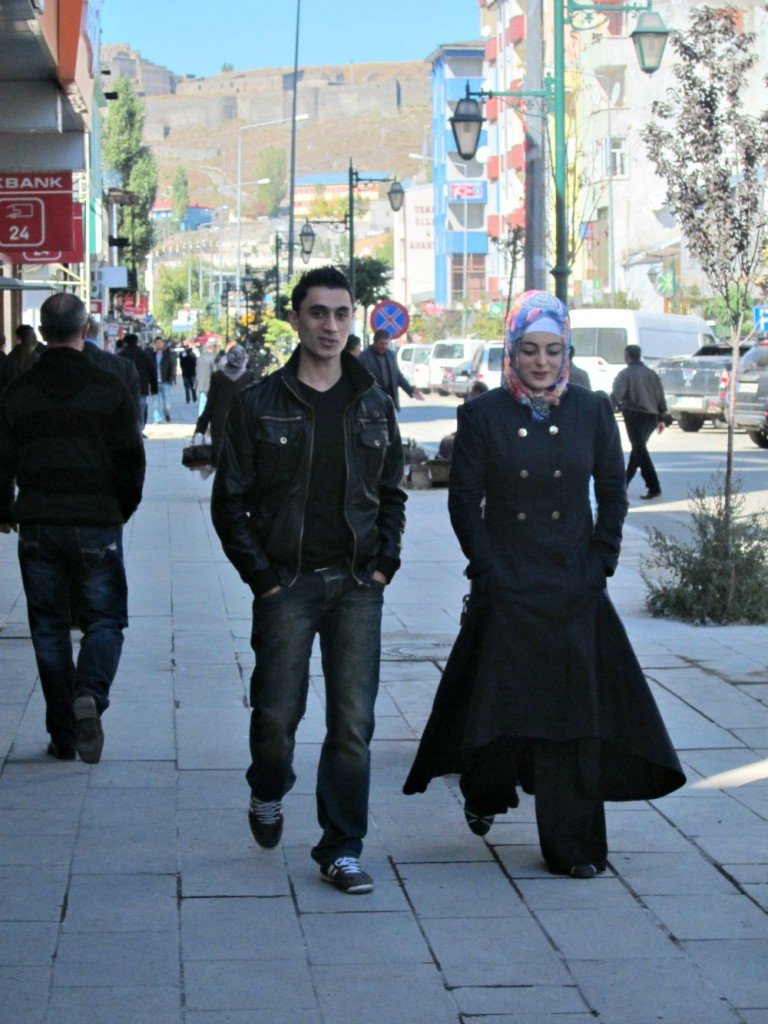 Some Turkish towns crept up on us – Kars was not one of those.

We arrived around lunch time to find the streets too chaotic to both drive and look for street names at the same time (our GPS threw it’s hands in the air in Kars).  As we stood on a corner with our Lonely Planet Turkey open, I noted a mosque not far to our right.  Mosques are handy landmarks in Turkey and are quite often marked on maps.

I was just saying so when a huge bearlike man crossed the street, grabbed our hands and began pumping them vigorously.   Even though he stood in the gutter I looked up to him from my spot on the footpath.

Establishing that we were from Australia, Boris announced in a booming voice that he himself was from Kars and would like to help us.

This is not a photo of Boris!

We were used to Turkish people being FRIENDLY and helpful, but while they were often quirky and humorous they were also quiet and calm.  Those however were not words I would use to describe this particular Good Samaritan.  Overflowing with welcome, Boris was also commanding, impressive, maybe even a little bossy?  Telling him that we were looking for the Güngören Otel, he motioned us to follow him.

Thinking the hotel must be nearby we went along – it seemed pointless and silly to refuse.  B.H. kept pace while I ran along behind feeling like a child.  I guess he had exhausted his English by then, because a non-stop wave of Turkish washed over us thereafter.  The language barrier didn’t exist for Boris.

The hotel was not close.  We galloped through (I guess he was in a hurry or did he always walk like that) innumerable streets and alleyways until I started feeling a tad uneasy.  I tried vainly to remember our route.  We passed salt bricks stacked on footpaths, and enormous cabbage piles, we passed men welding in workshops that spilled onto the path and shops selling large wheels of cheese, and whenever we turned right the menacing Kars Castle looked down on us.  I itched to take photos but dared not stop.

What if Boris was a con-man or worse?  Every so often he would notice that I had fallen behind and would look imploringly at B.H. as if to say “make her keep up will you!” and then he would point to me and point at the ground behind him.  I obeyed, albeit with strangled hysterical giggles.  Just as my mind started formulating escape plans, we turned a corner and there was the hotel.

I could not believe that he had gone so far out of his way to help us.  Not happy to abandon us outside, Boris flung open the doors of the Güngören and marched up to the male Receptionist.  As usual he spoke with voluble authority and only Allah and the receptionist knew what he had to say.  I listened for the word Australian but didn’t hear it.   There were quick goodbyes, handshakes and thank-yous before he turned and strode out of our lives.

We only hoped we would find our rental car again!

Unfortunately I have no photos of Boris but I do have photos of his town.

The people and the streets of Kars.

The local people are descended from the Karsaks and the town itself is named after them.

Many people visit Kars (pronounced Karzz) because of the famous Orhan Pamuk novel Snow, but the locals were not too keen on his portrayal of their town.

We visited Kars because of the ruins of ANI some 45 km east (yes there will be a future post), but we really enjoyed the vibrant feel of the town and would have stayed longer if we were not on a strict timetable.  There were many places of interest in town and in the general area that we did not get to see.  I would suggest staying at least two nights in Kars or more if you have time.

Kars is in North Eastern Turkey near the Armenian border and is 438 km south-east of Trabzon.