Stand with me for five minutes on Istanbul’s Galata Bridge amidst the fishermen with their long rods and look toward the Asian Shore.  It takes a while before a visitor here comes to terms with all the water. Flowing beneath us are the waters of the Golden Horn; in front and left the Bosphorus Straits lead toward the vast inland Black Sea, while to the right the Sea of Marmara home to the Princes’ Islands continues on through the Dardanelles to the Agean Sea.  Controlled by traffic lights the ferries that criss-cross the golden horn squeeze beneath us, it seems with only inches to spare. 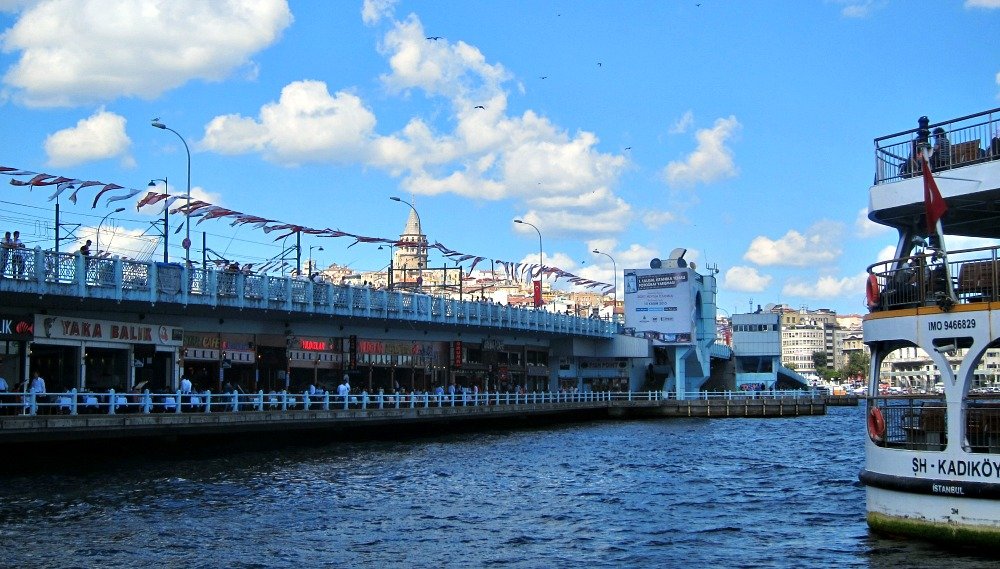 Istanbul might be a tantalising mix of exotic architecture and spices, but it is enhanced by a liberal serving of ferry horns, commuters and gulls. 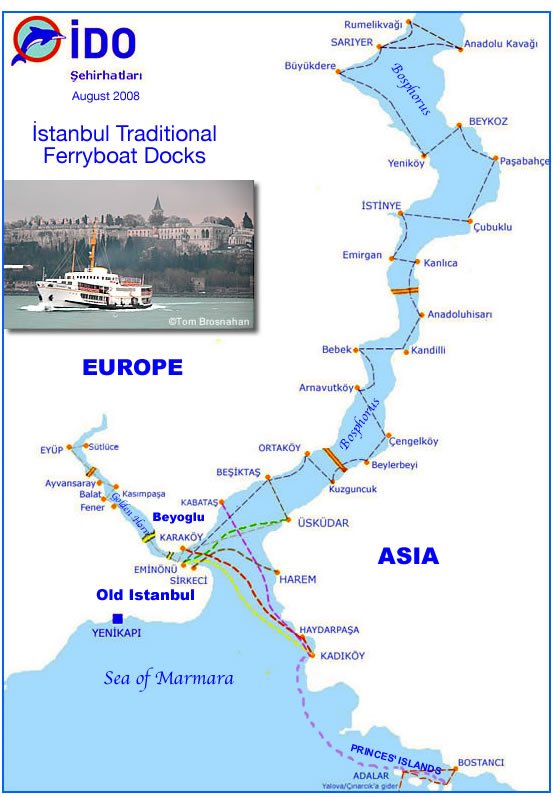 This transport map was sourced from Turkey Travel Planner a must visit site for visitors to Turkey.

We caught the ferry from Karakoy in Galata/Beyoglu to Kadikoy on the Asian side- red line on the map above.  One also departs from the other side of the bridge at Eminonu (yellow).

When the city is hot and sticky ferries provide shade and a cool breeze, and the one to cosmopolitan Kadikoy, I think has the best views of Istanbul’s iconic sights. We had visited the Tokapi Palace, Aya Sofia and the Blue Mosque some four weeks previously, but it wasn’t until I saw all three of them from the Kadikoy ferry that they clicked into place.

Photos are shown in order from Karakoy to Kadikoy.

Yolcu Salonu Istanbul’s Passenger Liner Terminal is on the left as we depart Karakoy – pronounced Yohl-Joo Sah-Loh-Noo.  Visitors who arrive in Istanbul by Cruise Liner are very lucky indeed.  They disembark into the vibrant Galata/Beyoglu district, from where the city is easy to explore. 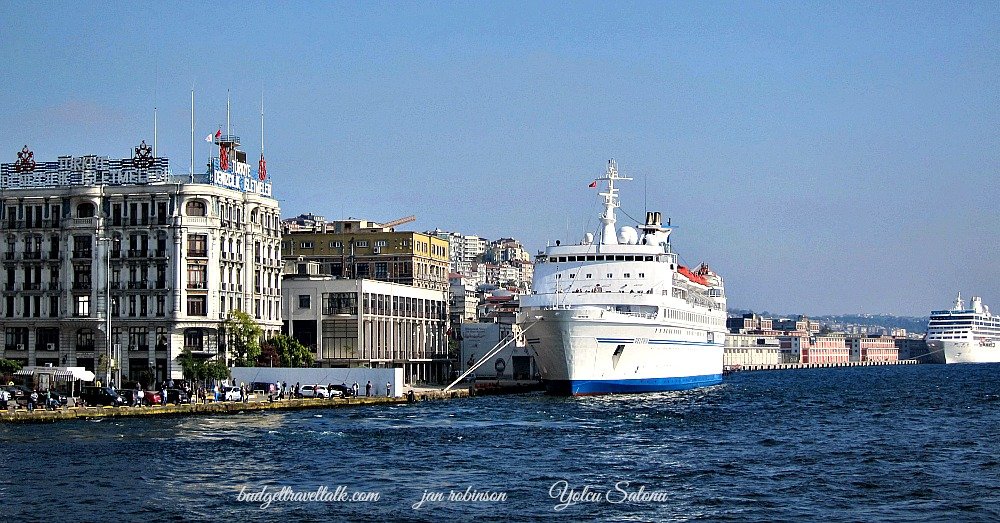 Topkapi Palace on the right of the ferry.

Sprawled above the Bosporus Strait, the view from the ferry shows just how huge this Palace, once home of the Ottoman Sultans, is.  If you have ever wanted to visit a Harem, Topkapi is the palace for you.  The views over the Bosphorus Straits and the Sea of Marmara from the panoramic terrace of the Palace are huge.

In the photo below you can see the people on that terrace  – in the two large arches either side of the front top corner.  Closed Tuesday.

Below the Palace are the Sea Walls first built in 195. 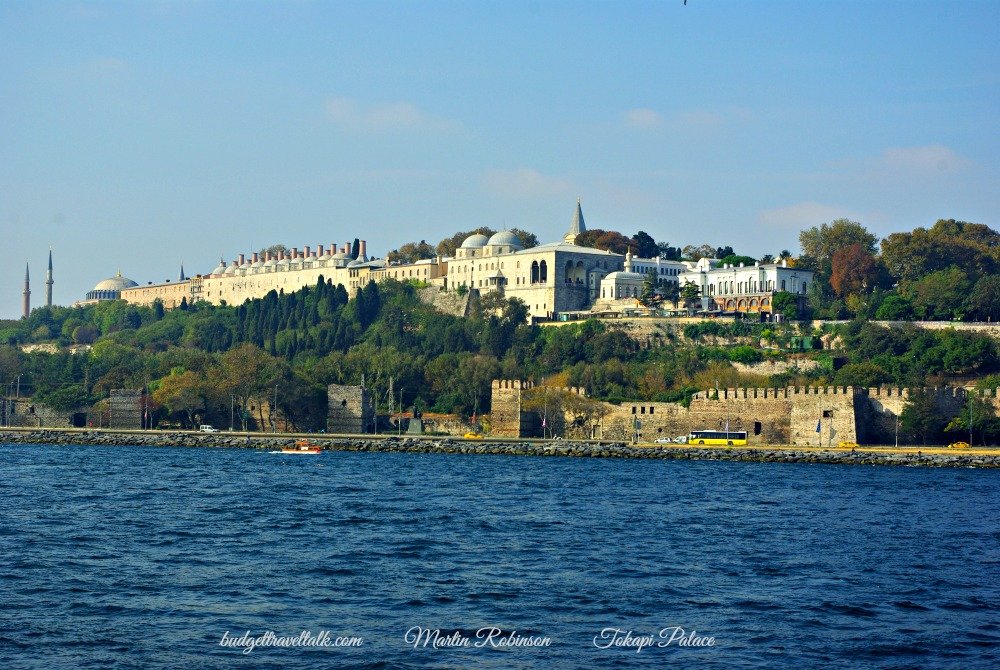 Aya Sofia and the Blue Mosque

Aya Sofia is in the foreground with the four minarets, it’s pink exterior covered by foliage, and the Blue Mosque with it’s distinctive six minarets sits behind. 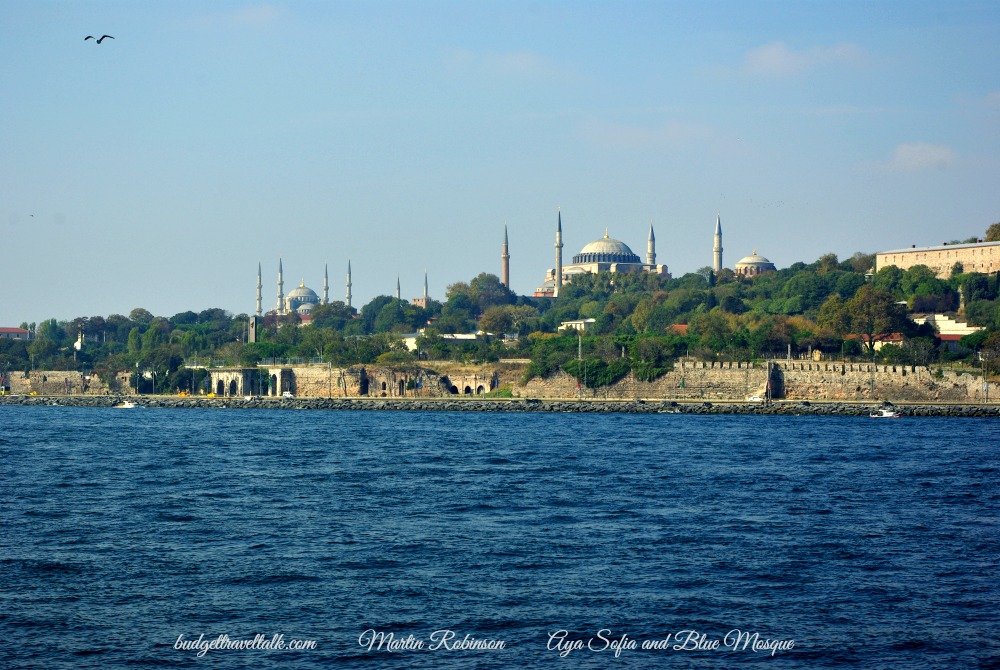 Aya Sofia.  Once a Greek Orthodox Basilica, then an Imperial Mosque, Aya Sofia is now a museum of the people.  The current version of Aya Sofia was built in only five years 532-537 by Emperor Justinian.  He wisely employed two unknown builders who knew mathematics, statics and kinetics, who were able to construct this church of a size, not before seen.  It is easy to feel humble in such a building. Closed Monday. 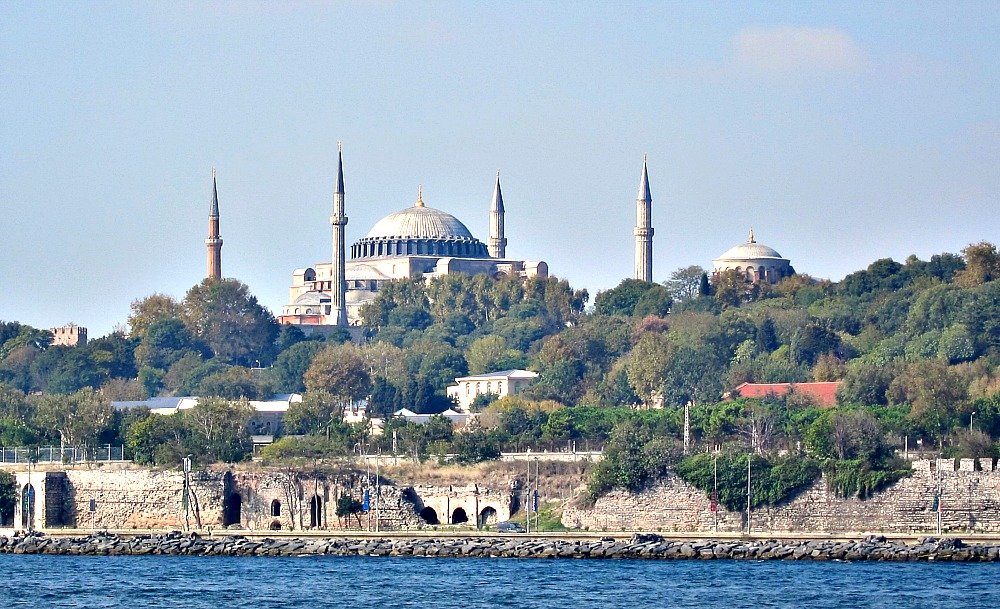 Sultan Ahmed Mosque. If you peek out of the windows of the Aya Sofia you can see this mosque.  Built between 1609 and 1616 it’s common name The Blue Mosque comes from the tiles on the interior walls.  The six minarets were considered a gesture of one-up-manship at the time because the revered Ka’aba mosque in Mecca had six.  To avert trouble another minaret was added to the one in Mecca.  Hiring a guide will bypass the huge lineups to enter the mosque.  Open daily between prayer times. 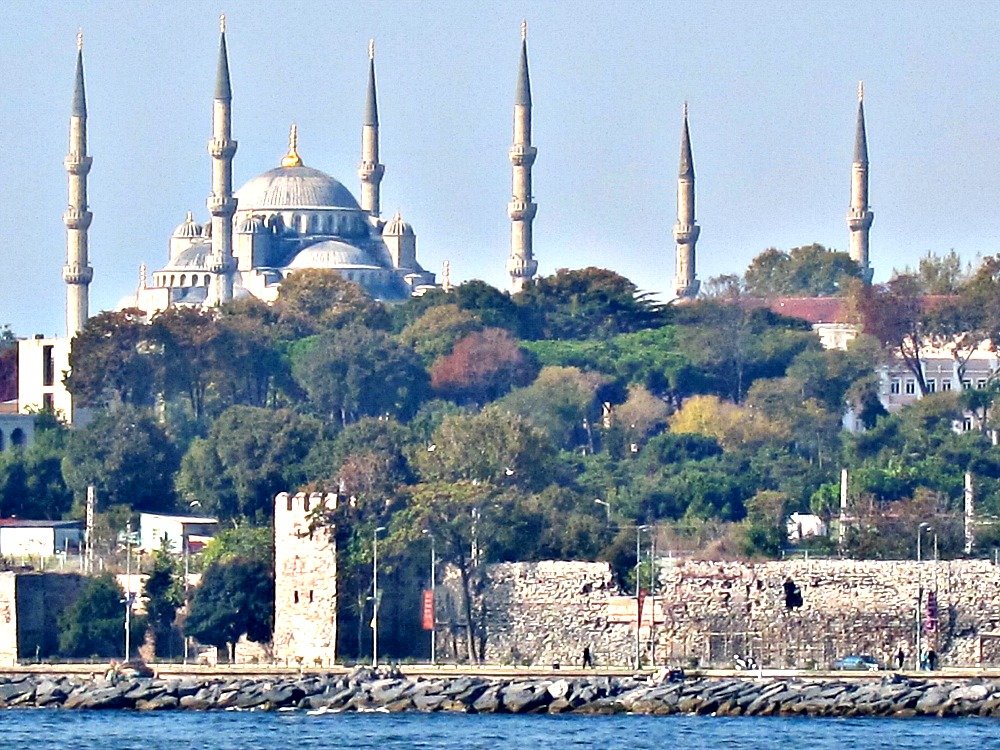 The Byzantines used the tower to chain off the Bosphorus, and thus extract a tax on ships entering and leaving the Black Sea.

This is only one of the intriguing facts and fables associated with Kiz Kulesi.  Closer to Uskudur than Kadikoy it is still able to be seen from the left hand side of the Kadikoy Ferry.  A visit to the tower gives 360 degree views from the restaurant at the top.  A great place for sunset and night light photography, but go before 8 pm as it is dinner reservations only after that.  Catch the Uskudur ferry and then a private boat service (15tl) from the Salacak area of Uskudur.  The tower featured in the James Bond film The World is Not Enough. 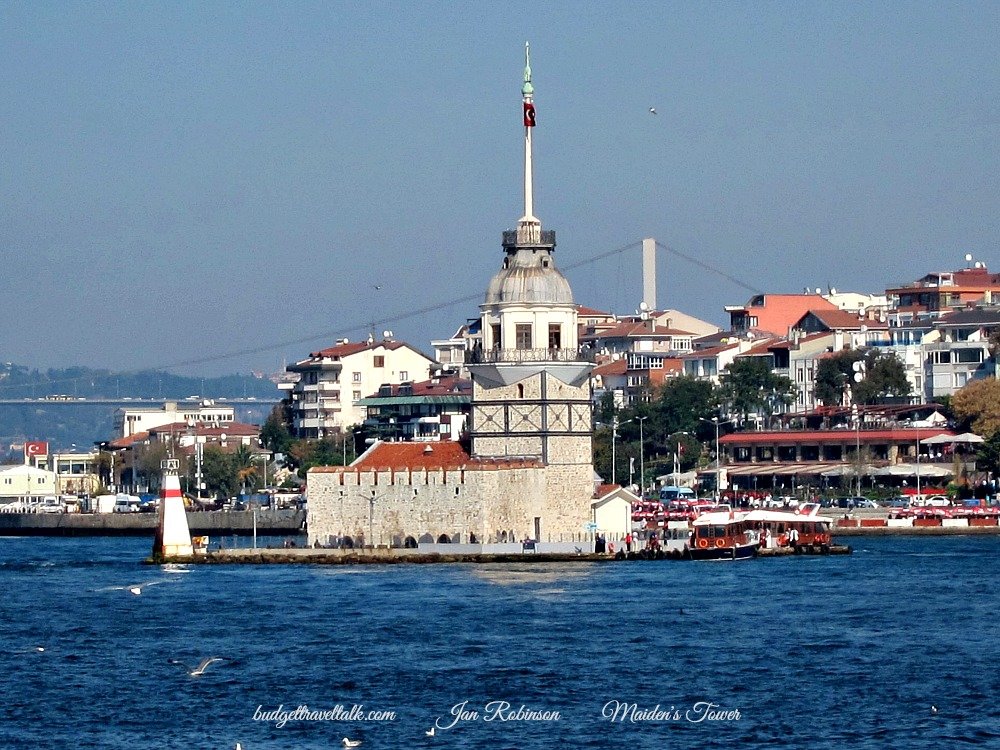 Built between 1906 and 1908 as a gift from Germany, this beautiful neoclassical building no longer operates passenger services and ferries no longer stop there. It is an easy 10 minute walk to the station from the Kadikoy ferry terminal.  The history of the building can be read within and seats and drinks are available beside the Bosphorus. When the high speed train line between Istanbul and Ankara is completed (hopefully soon) it will leave from Söğütlüçeşme 1km east. 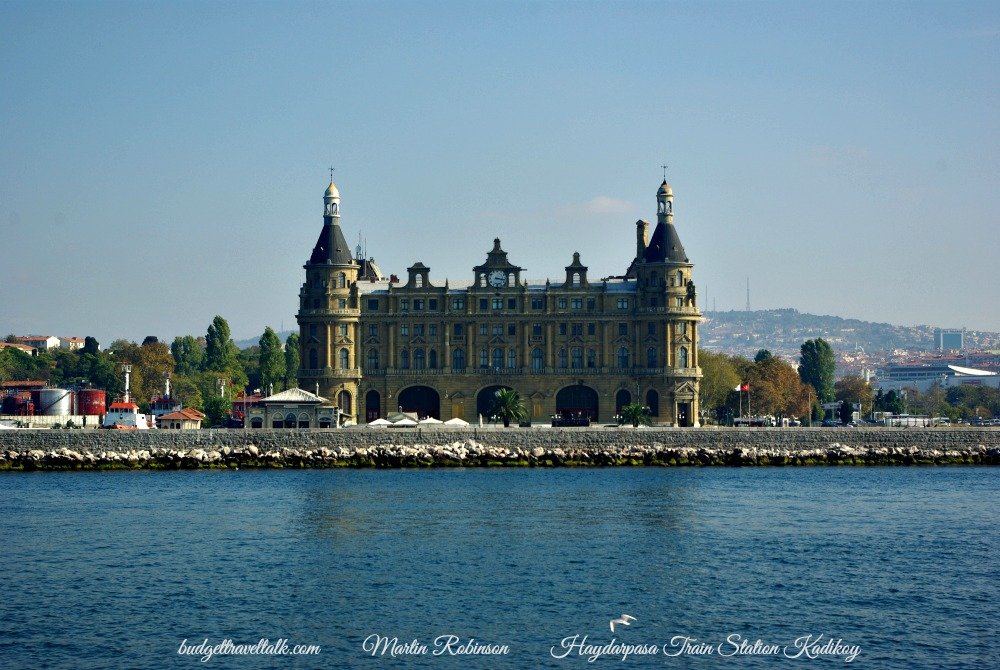 The Kadikoy Ferry does not stop at any of these attractions, but it does afford a different view of them – from a stretch of water that symbolically both separates and joins Asia and Europe.  Istanbulkart can be used to enter the ferry.

This post is linked to Budget Travelers Sandbox for Travel Photo Thursday.

Dondurma or a Magical Turkish Icecream
Next Post: Pincushion Island at the Mouth of the Maroochy River Queensland