We decided on the spur of the moment to visit Kampong Pluk a fishing village on Tonle Sap some 30 km south-east of Siem Reap in Cambodia.
[pinit] 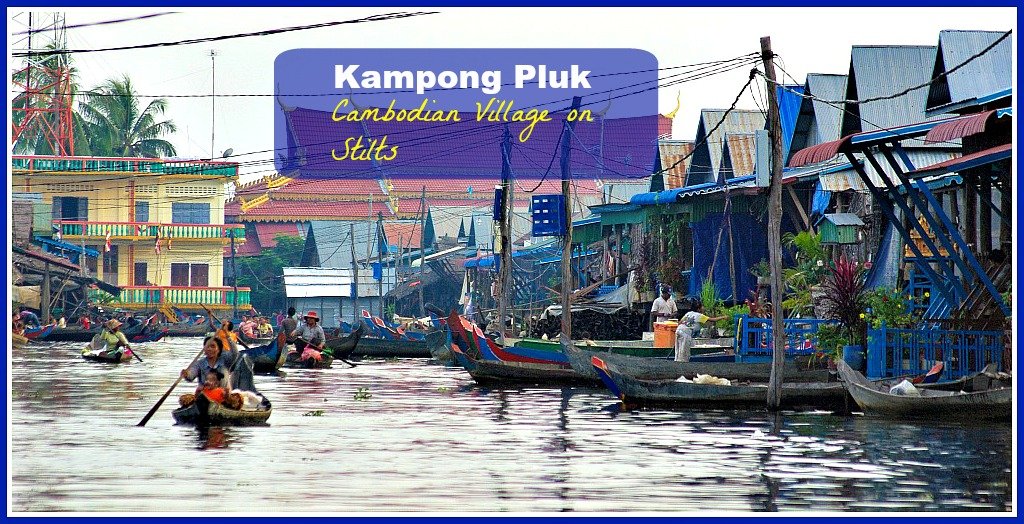 During three weeks in Cambodia in 2013 we spent four days in Siem Reap. Our spontaneous decision was made on a day trip to Beng Melea, an impressive ruined Wat the jungle is busy reclaiming, some 68 km from Siem Reap.

Beng Melea was a fantastic Indiana Jones  experience which I highly recommend.  Along the way we stopped to look at Pre Rup, a Wat close to Siem Reap that caught our eye and Banteay Srei, referred to with good cause as The Jewel in the Crown of Angkorian Artisanship.

We were on our way back to Siem Reap when our driver planted the seed.

Had we been to a Cambodian fishing village? he asked.

And so it was that three-quarters of an hour later we diverted down a bumpy 6km long dirt road.  It was 4.30 p.m. by the time we reached the departure point – rather late to venture out on to Tonle Sap, I thought.

We paid 18USD at the Ticket Office on Site.


By Cambodian standards that seemed overpriced, but not by choice, we did have the whole boat to ourselves. Having jolted our way down that long and difficult road it seemed crazy to change our minds because of a fee, which in all reality was the cost of morning tea in Australia. A post trip check on Trip Advisor revealed this amount was correct. The current rate is 20/22USD each.

Tonle Sap is both a river and lake. The freshwater lake is the largest in South East Asia and is a UNESCO biosphere.

A river that changes direction.

The Tonle Sap river normally flows into the Mekong at Phnom Penh, but when the Mekong swells with melt water from the Himalayas and is deluged by the monsoon rains in it’s upper catchment, the water backs up and like magic reverses it’s flow, expanding the lake – nature at it’s most impressive.

This expansion creates plentiful fish breeding areas among the fields and forests and we saw first hand crowds of locals pulling cast nets full of fish and prawns from the encroaching waters as we journeyed around the Tonle Sap from Phnom Penh, enroute to Siem Reap, Battambang and back to Phnom Penh. It was exciting to watch.

The boat putted slowly along and the sun was low in the sky by the time we got to Kampong Pluk.

By the way, the name Kampong Pluk translates to Harbor of the Tusks and I have a sinking feeling that once upon a time that meant elephant tusks.

Lemon grass and herbs grew in containers on the village verandahs and morning glory (such a popular Asian green vegetable) grew beside the houses in the water, a sight that reminded us of the canals of Bangkok. Shops and food vendors operated from canoes as well as from the stilted houses, the main source of village income being fresh water prawns and livestock like pigs, chickens and dogs.

Young children were trusted and capable boat captains and this time of day seemed a sociable one with families out in force.  We left the villagers to get on with their evening and adjourned to a quiet part of the lake where we cut the motor and waited for the sun to set. 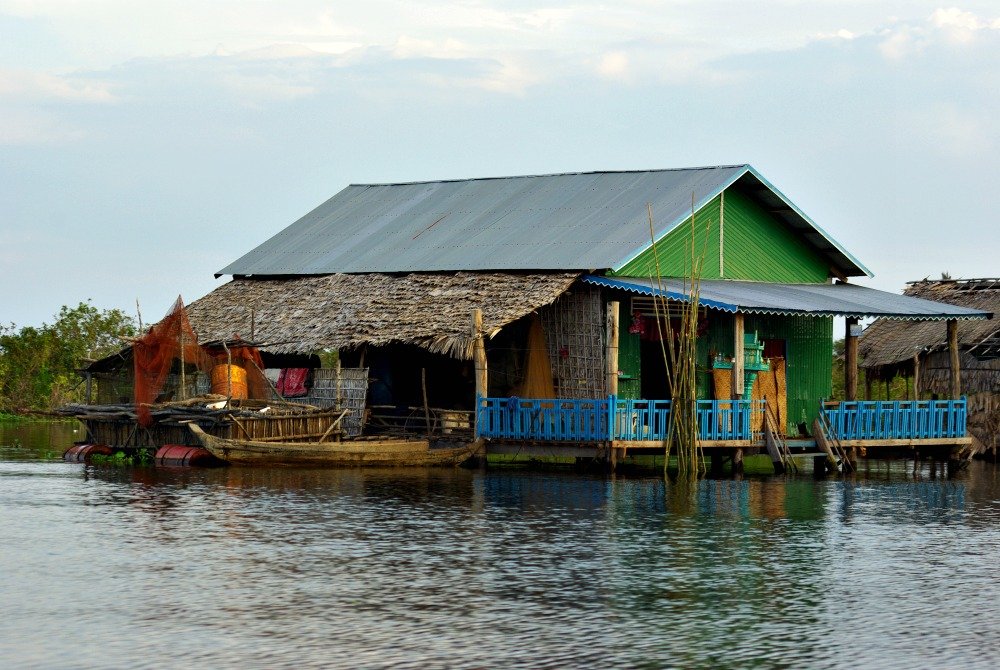 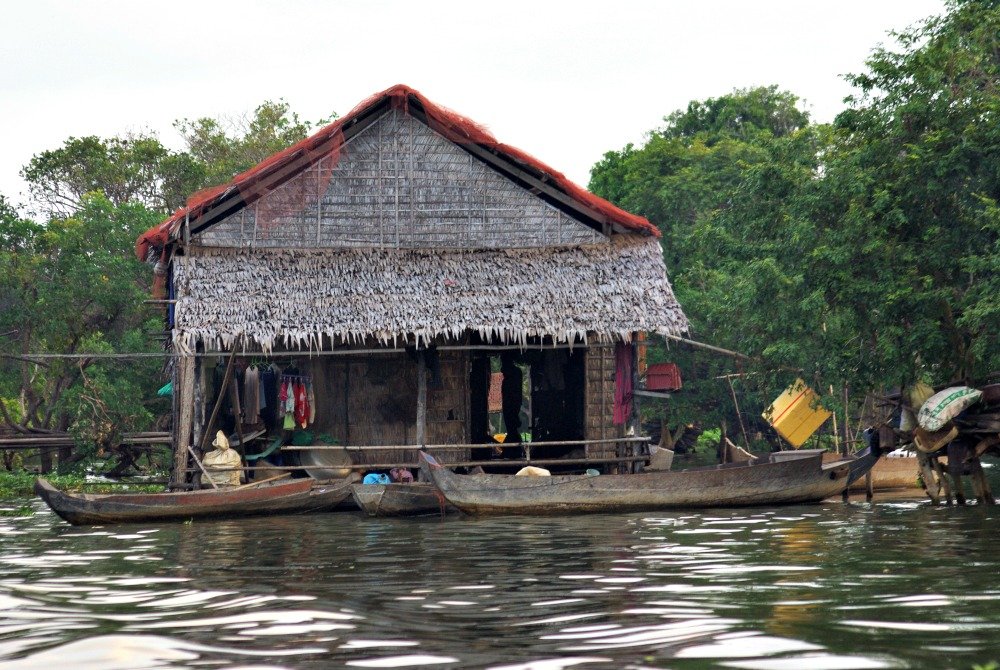 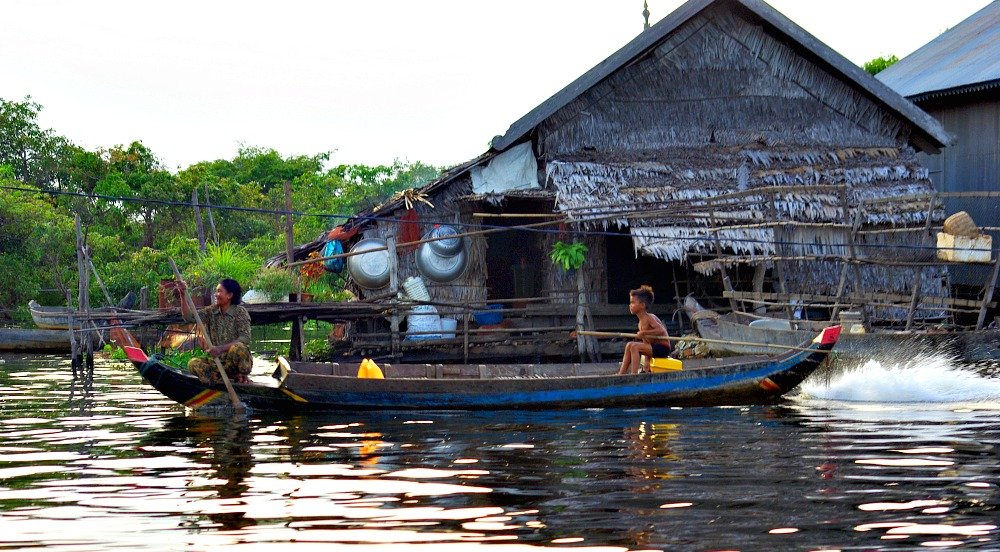 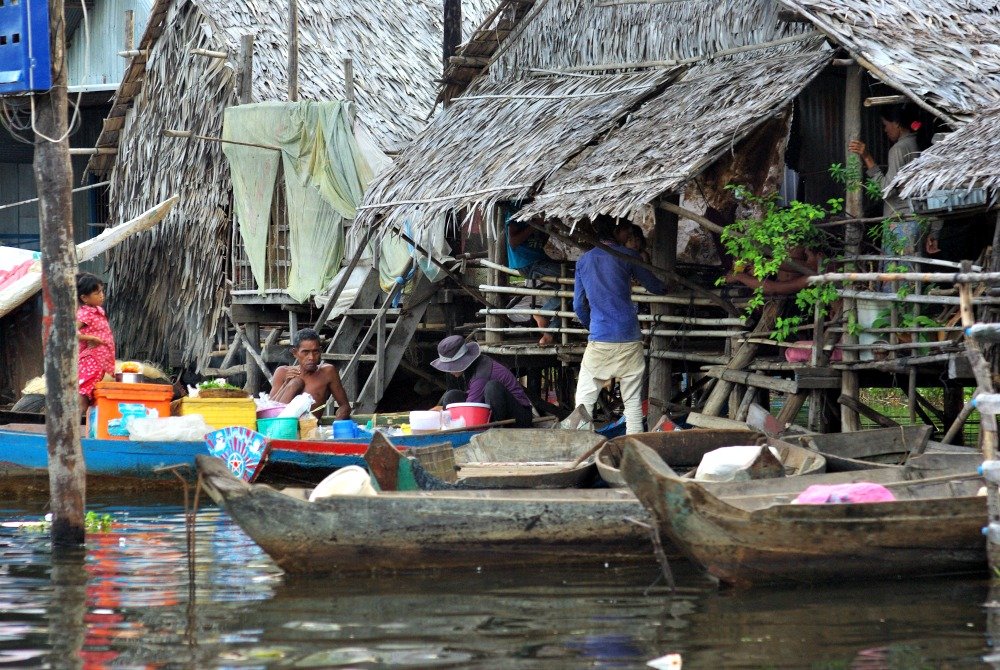 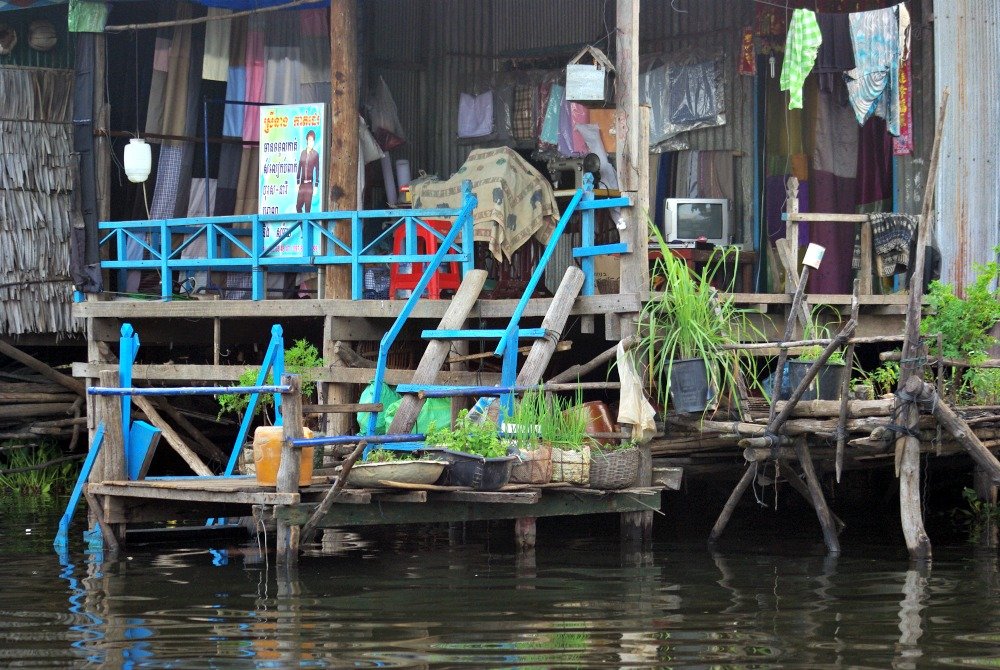 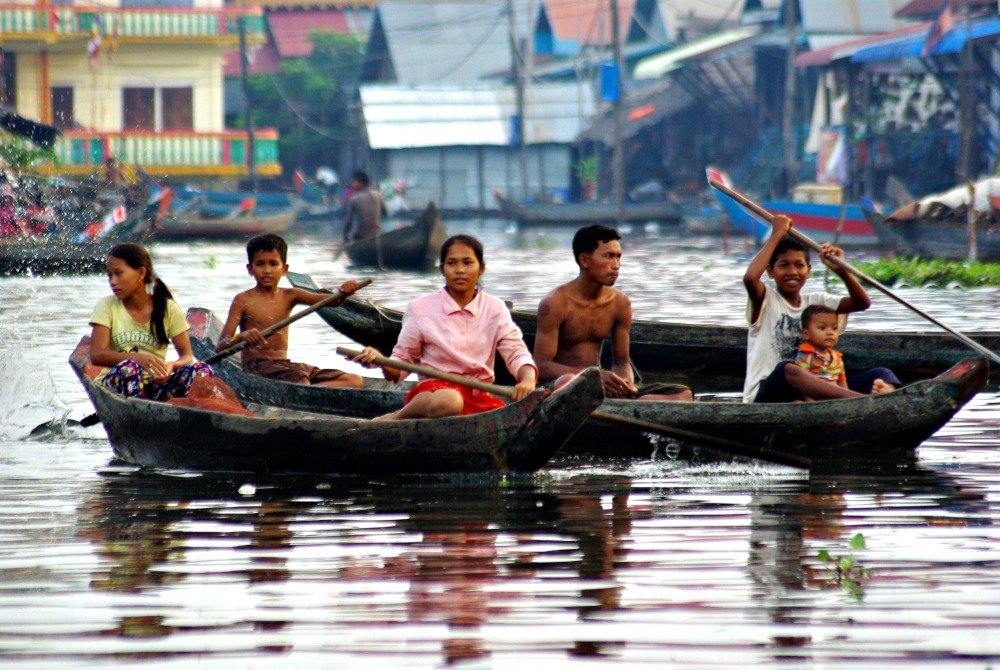 The sun sets quickly in the tropics.

As soon as the sun disappeared behind the clouds we started the engine and headed for home. Borith was soon in the bow of the boat holding a tiny torch, and looking a little concerned. A couple of gung ho boat operators overtook us in the dark and I had a feeling the adventure could quite possibly end badly. Thankfully our young boatman kept his cool and delivered us safely to shore.

It was 7 pm by the time we were guided by shouts to our mooring spot alongside the other boats in the river.

After all the jostling and (my) panic at finding a mooring place in the dark, we noticed the swarms of mosquitoes. I had guilty visions of our poor driver barricaded in the car with the windows shut tight. Maybe he visited friends in the village, or maybe he was just happy to be earning money, but whatever the reason he was smiling when we finally found him. He was certainly not in a hurry as we didn’t exceed 30kph on the way back to town. Although the fuel gauge hovered on empty most of the way, we arrived home again without incident.  It was definitely a lucky day.

The good and bad of arriving late in the day.

Arriving earlier in Kampong Pluk would have allowed time to transfer to a smaller boat (5USD each) to explore the flooded forest. With the water level high the small boats drift surreally through the tree tops where birds, frogs, rats, spiders and snakes can be seen. Umm, I’d settle for the birds.

Arriving late in the day meant boat traffic outside of the village was non-existent and we sat on the ocean-like lake in complete serenity with the chance of seeing a spectacular Tonle Sap sunset.

The end of October coincides with the end of the Wet Season, so the water lapped the bottom of the houses. In the dry season the 7m high stilts of the houses are totally exposed offering a very different look. When this happens the inhabitants of the village live in temporary homes further out on the lake.

Know before you go.


The view of the stilted village varies enormously depending on the water level. Ask locals what to expect before committing.

The flooded forest can be explored by small boat at an extra 5USD each.

We did no research before arriving, but in retrospect could have asked the question. How Much of the Entrance Fee filters through to the villagers?

The other three fishing villages to consider are.

Chong Kneas is a floating village so it moves with the season.  Situated south of Siem Reap it is the closest of all the villages and by all accounts is overrun with tourists.

Kampong Khleang is a stilted town more so than a village, with a small floating community as well.  It has several ornate Pagodas.  50km south east of Siem Reap.

Me Chrey is the most recently “discovered” floating village.  25km south west of Siem Reap.

We found the Kampong Pluk experience pleasant, if a little hurried (our fault) and would recommend it for those who have not previously visited a stilted fishing village. I would have preferred to share the boat with others to reduce the cost.

We suggest hiring a car and driver (60 USD) from Siem Reap and visiting Beng Melea on the same day. Beng Melea has it’s own specialist guides but we had formed a rapport with our guide Borith, who had already taken us around Angkor Wat (25USD/day). He liaised with the Driver whose English was not fluent.  The car, driver and guide were arranged by our hotel which we found was the norm in Cambodia and Vietnam.

There will be further posts on the Wats of Angkor and the amazing Beng Melea.  Make sure you visit Nancie at Budget Travelers Sandbox for Travel Photo Thursday.

Riverway Townsville Walking Tracks
Next Post: The Strangest Food I’ve Eaten While Traveling or a Cup of Pink Pickled Cabbage