How Amazing is this Frieze at the Entrance to the top cave at Pak Ou.

Luckily the driver and fellow passenger on our Luang Prabang Mekong River Cruise had Thai as a common language.   With the passenger in the driver’s seat and the driver bent over the broken engine at the rear of the boat, adjustments were made and instructions called to turn the key at the appropriate time.

But the engine refused to start again and slowly the implications of our boat BREAKING DOWN IN THE MIDDLE OF THE MEKONG started to seep in.

We were not moored directly to the river’s edge, but to a strange collection of weathered rocks a little way off.  The water around us was deep in places and very muddy.  Canoes with motors attached cut through the channel and boats the same size as ours too, their crews steadfastly avoiding eye contact.  I was very relieved and amazed when our driver produced a mobile and made a call.  It never occurred to me that there would be signal in this remote area.

The engine cover at the back of the boat is raised and our driver/boat mechanic is vainly trying to fix the problem. 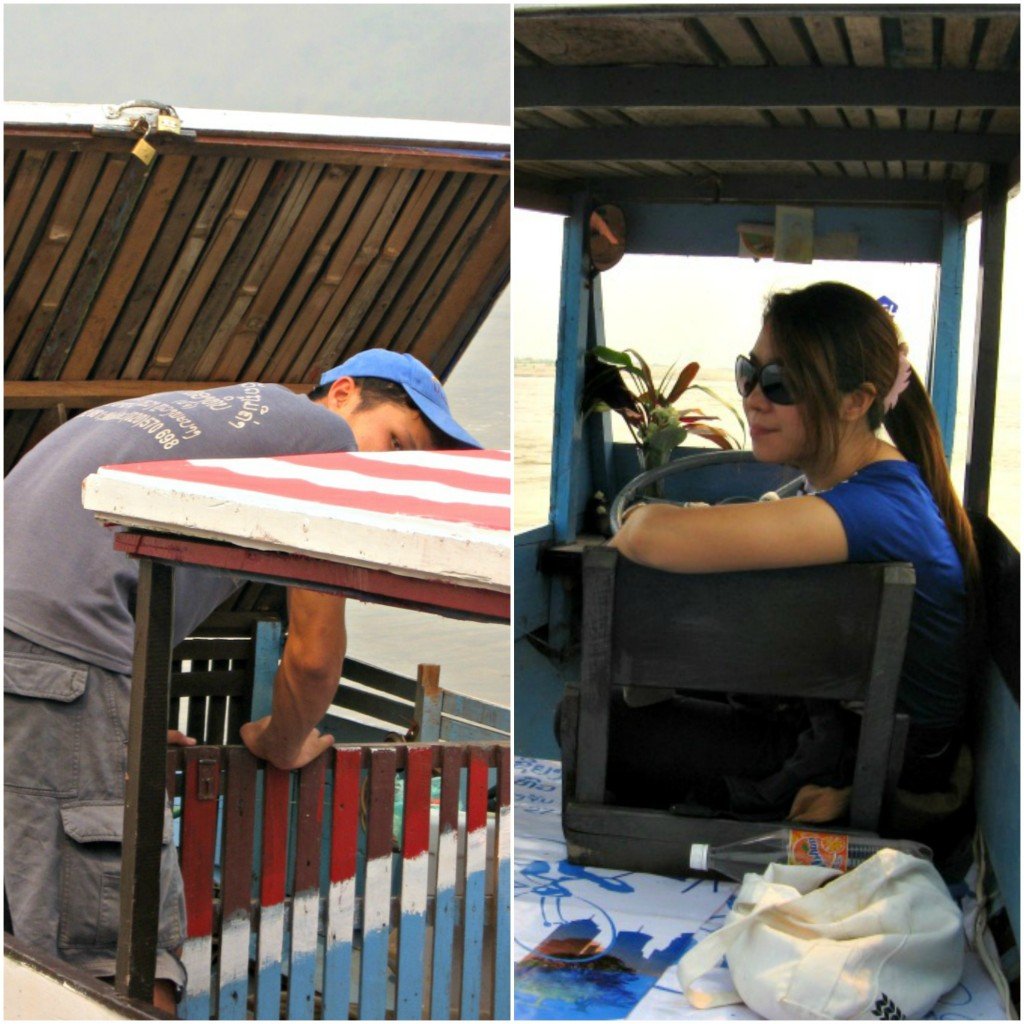 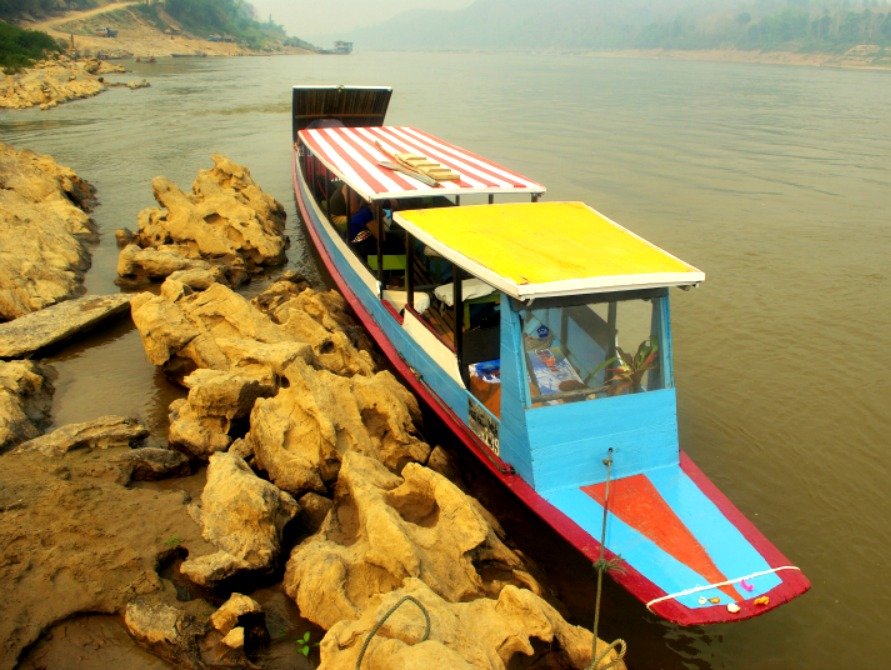 Upgraded Boat to the rescue. 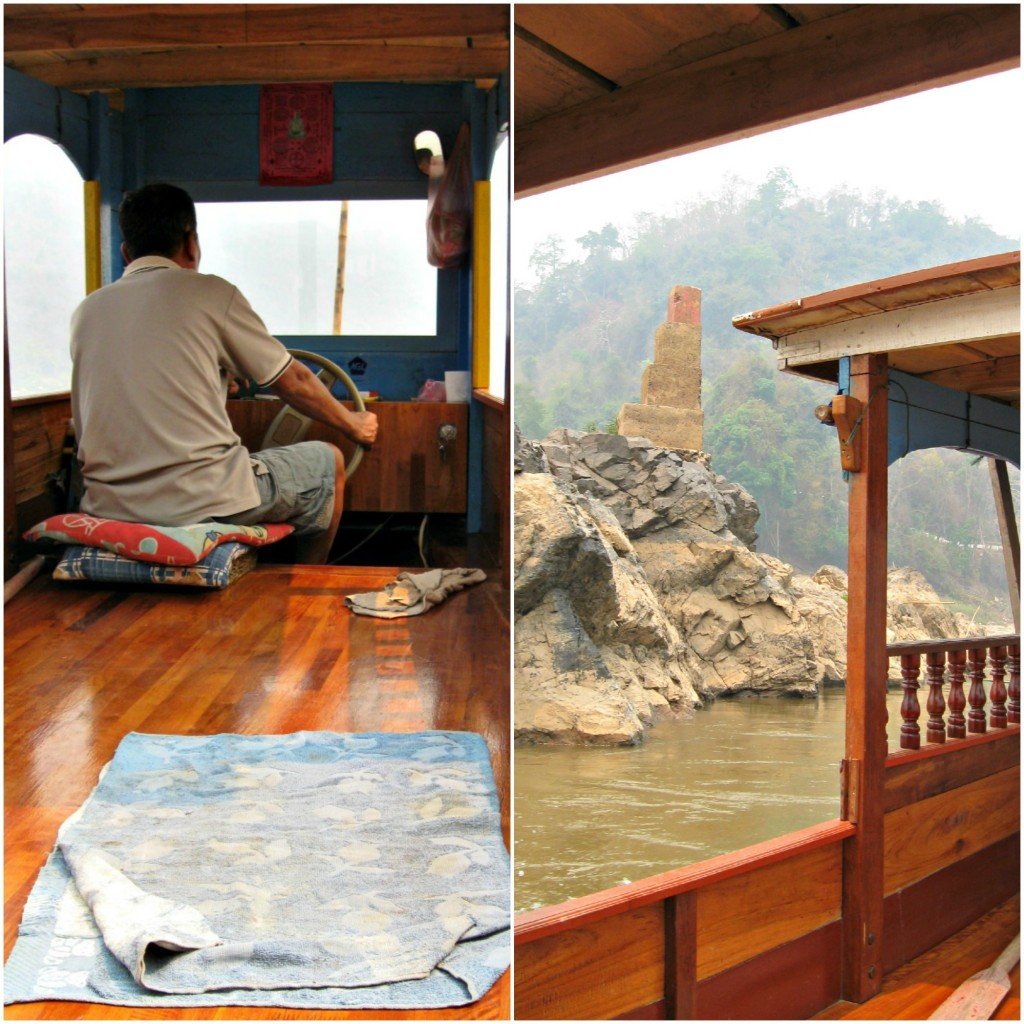 When our new boat arrived it was clear we had been upgraded.  Shiny lacquered wood and airplane seats replaced our multi-coloured miniature boat and tiny timber chairs.  It was good to be on the move again but I felt sorry to abandon our first boat and sad looking driver. 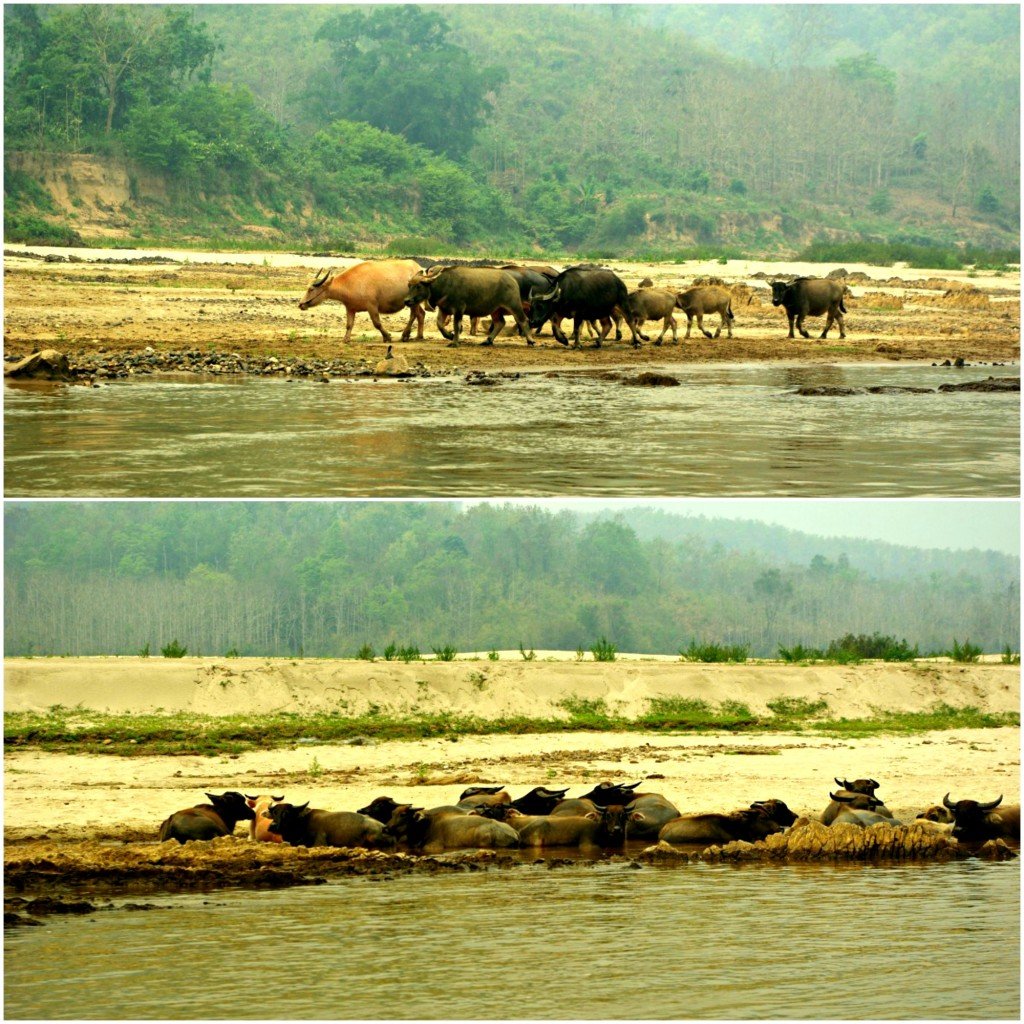 I guess these buffalo belonged to somebody as they are valued animals, but they seemed free to wander of their own accord, enjoying a soak in the river when they felt like it. 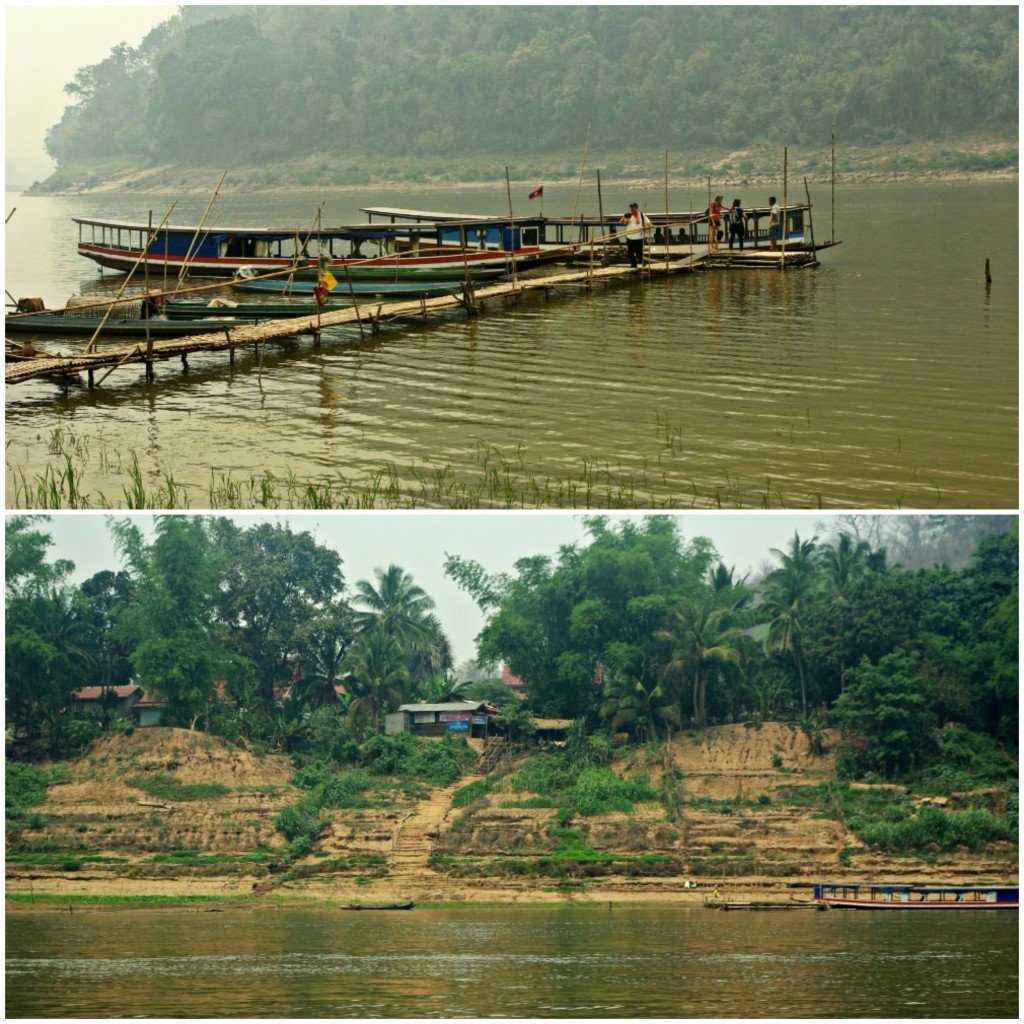 We had a private showing of weaving and whisky making at our one and only village stop on route to the Pak Ou caves.  We motored past the other village – I guess we had run out of time. 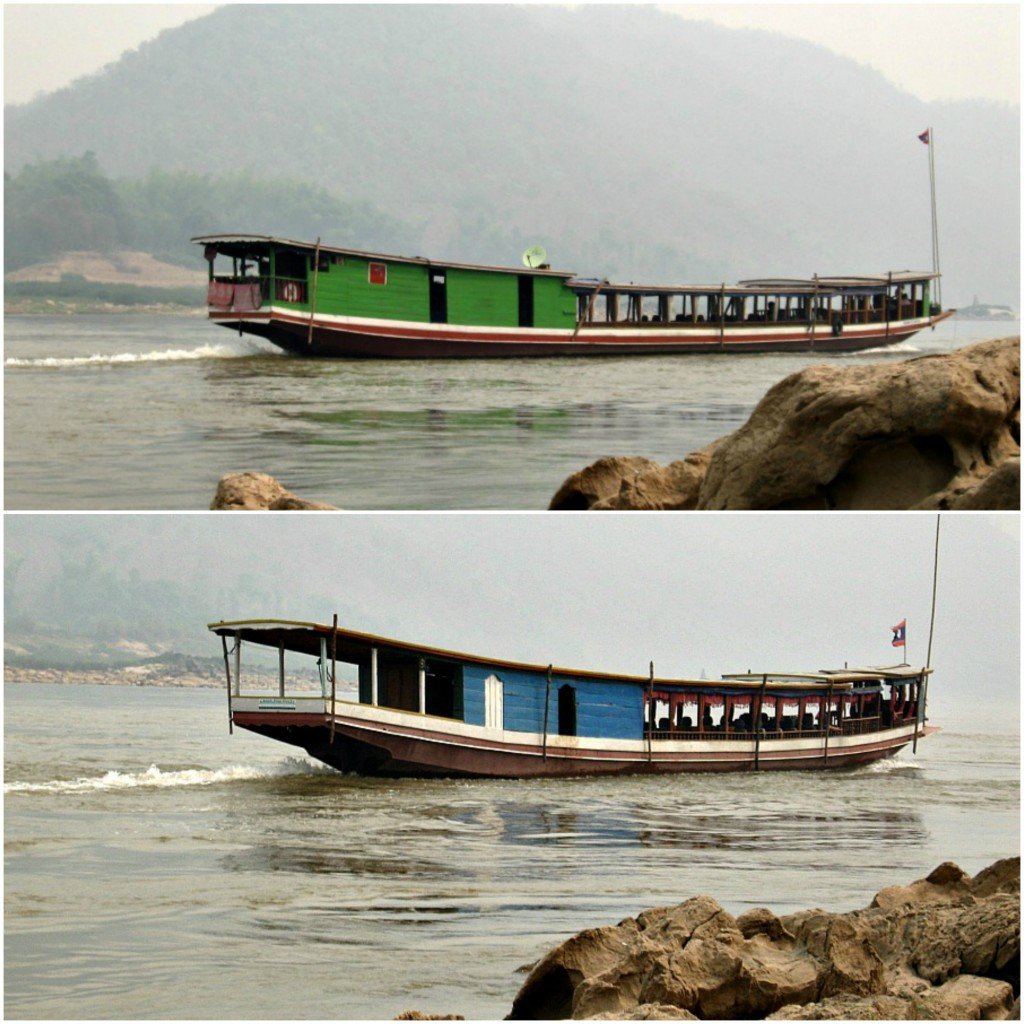 Looking up at the Pak Ou Buddha caves to this amazing frieze and big and Buddha Statues of all shapes and sizes. 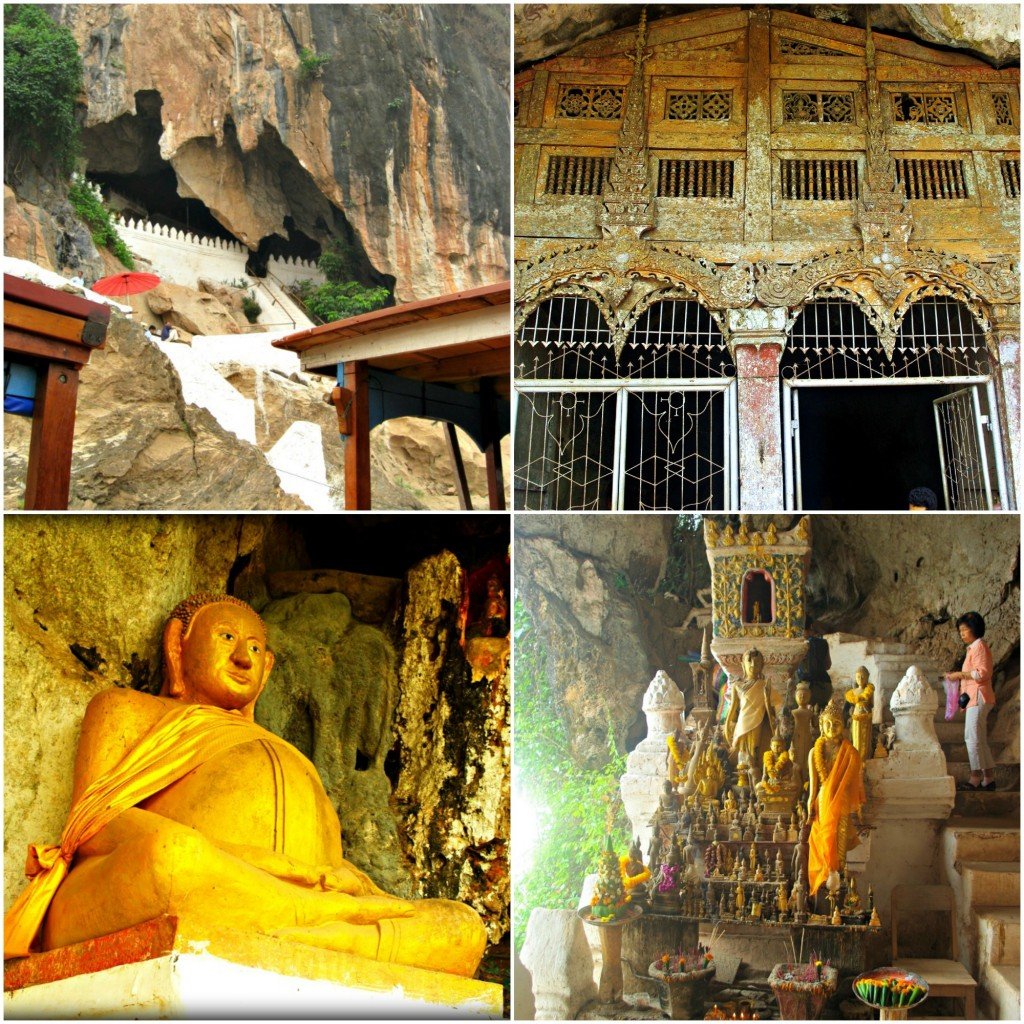 Originally the caves were frequented by Animist Tribes, the emphasis changing to Buddhism in the 14th Century.  During the 17th Century the Kings of Lane Xang made yearly pilgrimages to the caves, until in the 18th and 19th centuries legend says there were 37,000 buddha statues in the caves.  In 1992 a joint Laos/Australian conservation project commenced, but in 2001/2 well after the project’s completion, it was reported that many gold and silver statues and images had been stolen.

There appeared to be considerably fewer statues than today’s reported estimates of 2,500 (lower cave) and 2,000 (upper cave) when we visited.  The ones that were in residence were dusty and certainly ancient looking, and at the lower end of a scale from to 10 cm to 1.5 metres tall.  The standing position of the Buddhas is the traditional Laos style.

Buddha statues in general are cleaned for the Laos New Year which was fast approaching, and there were statue washing facilities in the caves, so an imminent wash was a possibility.

Looking out through the Frieze, Long stairs down, Monk Novices, and a chair for the weary. 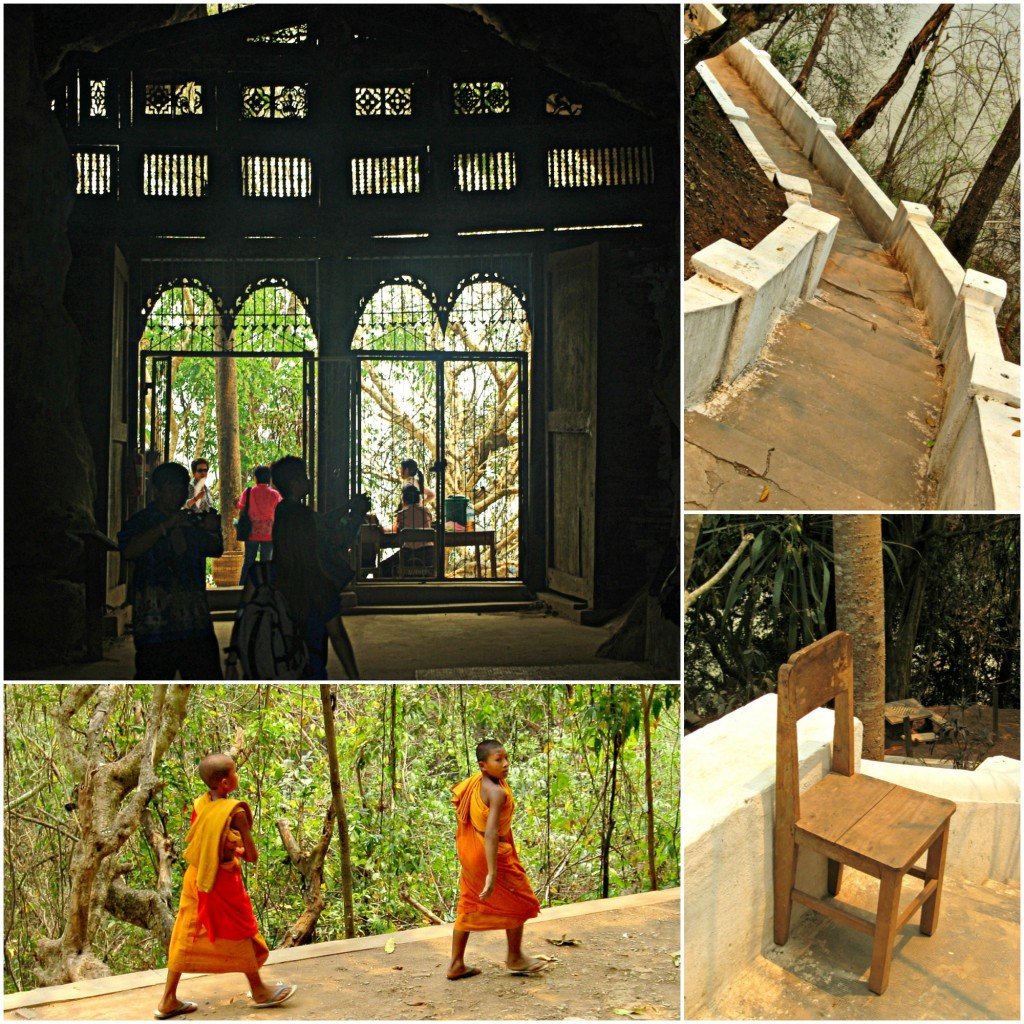 It was not the caves themselves that were meant to be the attraction at Pak Ou, but the collection of historical religious statues.  I fell in love with the teak Frieze entry to the top cave and the huge cavernous interiors.  The frieze conjured up romantic images of India and elephants, and is my favourite photo from Laos.  Or it might tie for 1st with my FAVOURITE MONK LIGHTING CANDLE PHOTO.

The name Pak Ou means mouth of the Ou (river).  Across from Pak Ou caves are the limestone cliffs of Pha Hen, at the base of which is a popular fishing spot and we did see lone fishermen in canoes.

By far the most common sight along the river between Luang Prabang and Pak Ou Caves was the collecting of river rocks.  Up to twenty people scavenged them in places, while young children played in the water or sat in the shade of fluttering material.  I could not help wondering what effect this continuous rock collecting would have on the river, although it probably only took place when the water level was low.

On shore we watched a young girl beating a bush with a long stick embedded with sharp nails at the end. She then harvested the impaled locusts, popping them into a plastic shopping bag.  You will find these local delicacies for sale in the food markets in Luang Prabang.

Due to our delayed arrival at the buddha caves we had lost the fleet of riverboats we departed with earlier in the day. There were a handful of other tourists at the caves, but our crew of six enjoyed an unhurried and personal tour of the caves, and then a speedy trip home in our lovely new boat!


I personally viewed our boat’s breakdown as a bonus.  After all not everyone can claim to have been Marooned on the Mekong.

Have You every been Marooned?

It is also possible to take a Songthaew or Jumbo by road from Luang Prabang to Ban Pak Ou and then a short boat trip across river to the caves.  This could be a cheaper option.

No matter how you arrive there is a further charge to enter the caves – 20,000 kip.

The 25 km upstream to the caves takes 1.5 hours and the return trip 1 hour.

Nancie over at Budget Travelers Sandbox hosts TRAVEL PHOTO THURSDAY.  Click on the link for more travel photos from around the world.