South of Cania Gorge on the Burnett Highway is the cute country town of Monto Qld, the most northern and youngest town in the North Burnett region. With a current population of around 1,500, it came into being in 1924 with land plot handovers to soldiers returning from WWI.

On arrival I suggest dropping into the Pioneer Cottage Information Centre in Lister Street, at the lower end of Newton. The staff have a lot of tourist literature and local knowledge and at the back of the cottage is an art walk and close by, a $5/night RV/Caravan overnight area.

After an informative chat I was eager to explore wide Newton Street – wide as only Country Town streets are. Monto was the first Queensland town designed using official Town Planning principles. First up was the Grand Hotel taking up a fair chunk of the Newton/Lister Street corner. I love Aussie Pubs – who doesn’t!

I fantasise about taking a room upstairs and relaxing on the inevitable verandah with a cool drink. This harks back to when I stayed in the grand, then operating, Queens Hotel on the Strand in Townsville. So romantic!

Wiki Camps App has many comments about how great the meals are at this pub. 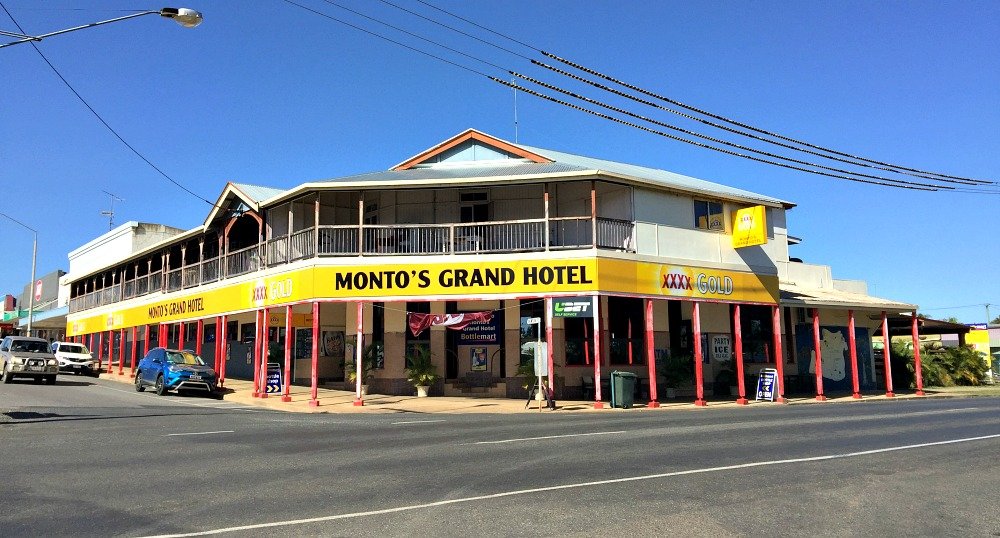 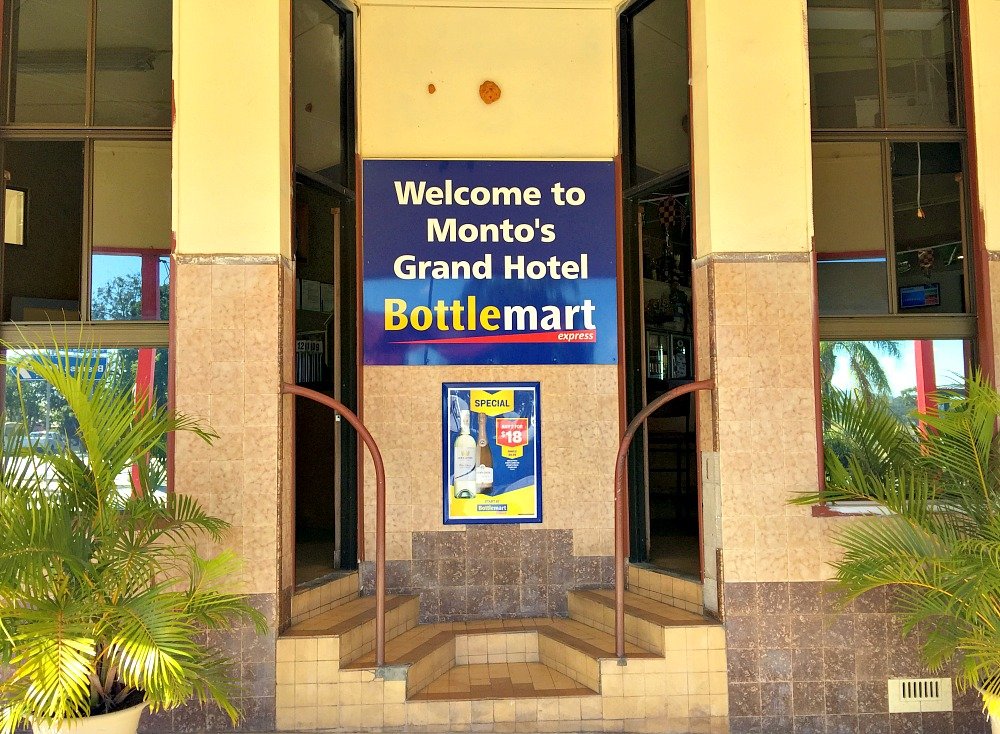 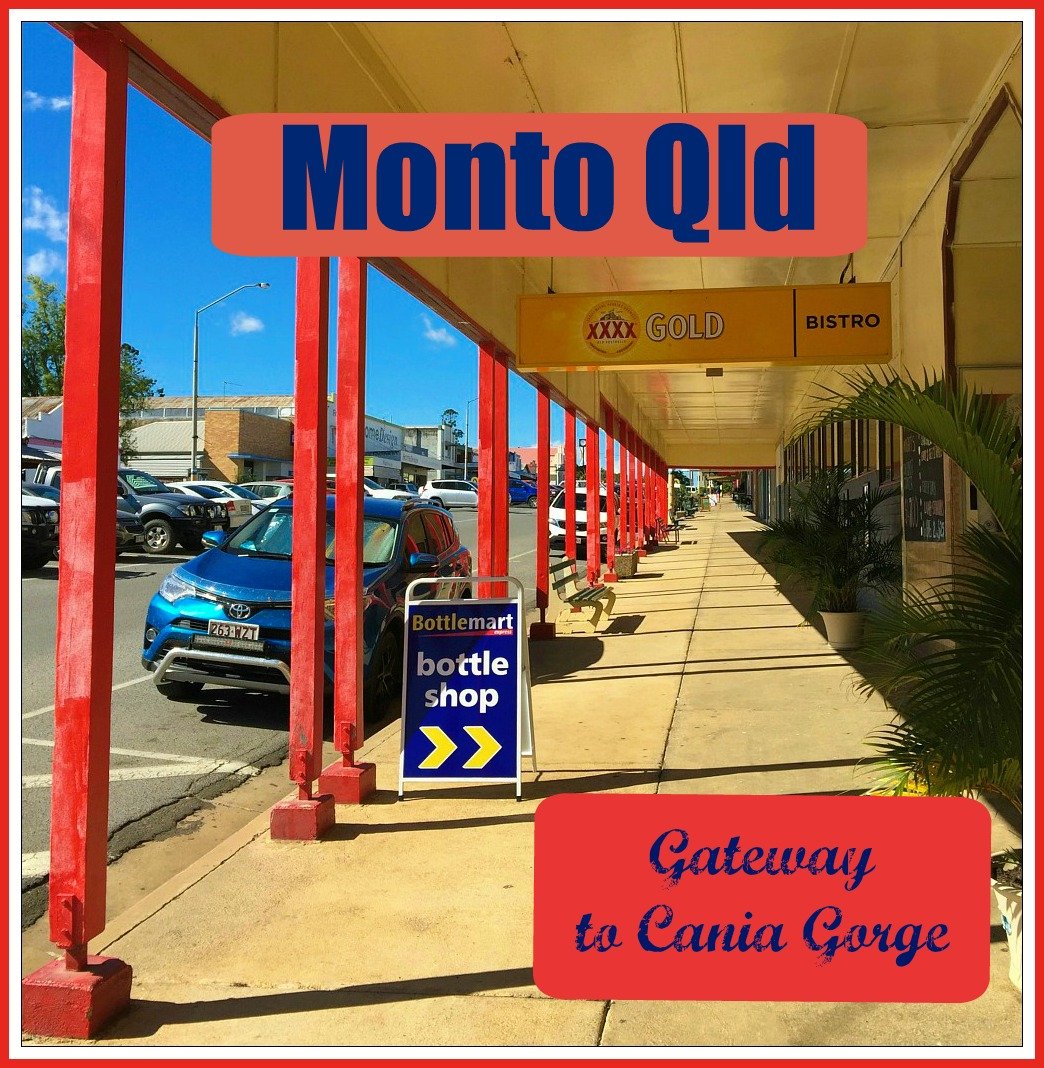 We didn’t eat at Kim’s Kafe. To be honest what I loved about this cafe was the glass detail at the top of the shopfront. I worked for a glass company for fifteen years and I notice this kind of thing – what more can I say. 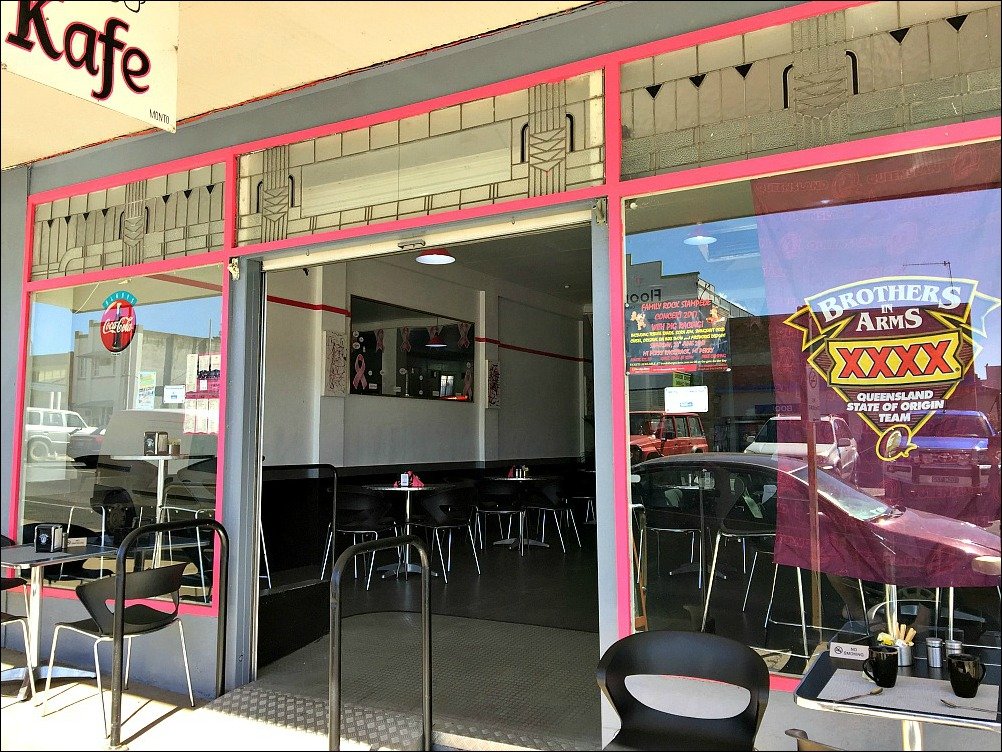 In the centre of the street is an interesting looking clock. To my mind it looks Art Deco. It may or may not be that, but it does have an interesting story. It is dedicated to local pioneers and represents the legend of the local Three Moon Creek.

A Chinese shepherd was camped with this sheep on Three Moon Creek, the boss asked him to fetch water from the creek.  After filling the billy he saw three moons.  On his arrival back at the camp he said to the boss, “Three moons Boss, three moons Boss”, and he pointed, one in the bucket, one in the creek and one in the sky.  From then on drovers and others called the creek Three Moon. 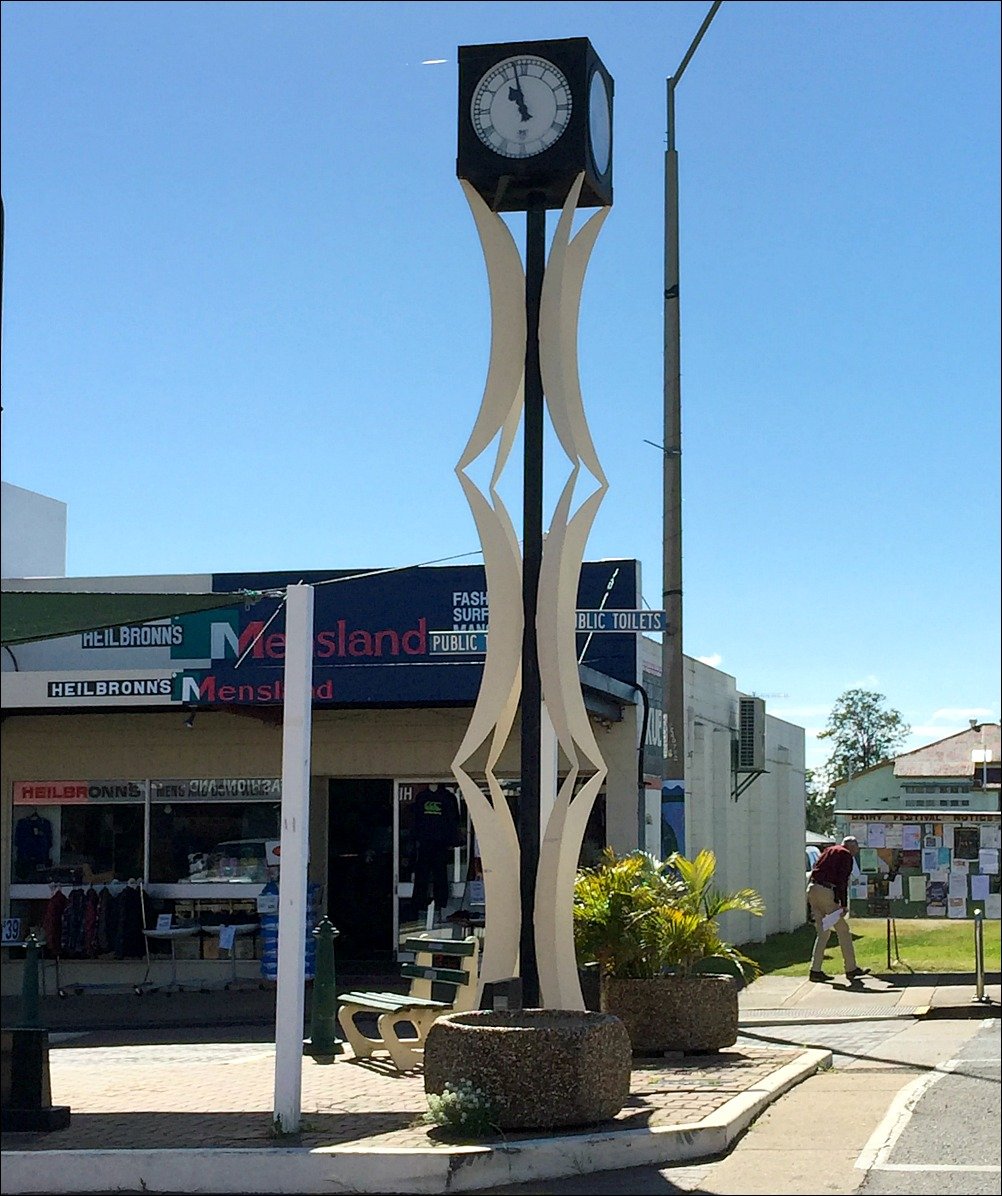 The travellers grapevine has it that Millers of Monto have a great range of sausages and the winning certificates to prove it. Marty is ambivalent about snags but I believe a BBQ isn’t complete without them. We saved our butcher shop visit for the return walk through town. Having entered using the signature meat cleaver door handle we viewed the range and narrowed it down to two.

We chose beef bangers with honey mustard and another surprise variety currently stashed in our freezer (surprise because I’ve forgotten). The grilled honey mustard snags were superb with great texture and taste. Even Marty was whole-hearted in his praise. I recommend a visit if you’re in town. They also have their own small goods range. Wiki Caps App comments (for Monto Caravan Park) recommend Millers for fantastic steak.

We purchased a peg bag here. I’ve been looking for one on the Sunshine Coast but here the locally made one was sturdy and about a third cheaper than at home. I started talking to the owner who told me of the thriving group of quilters based in the shop. This patronage helps keeps small towns ticking over. 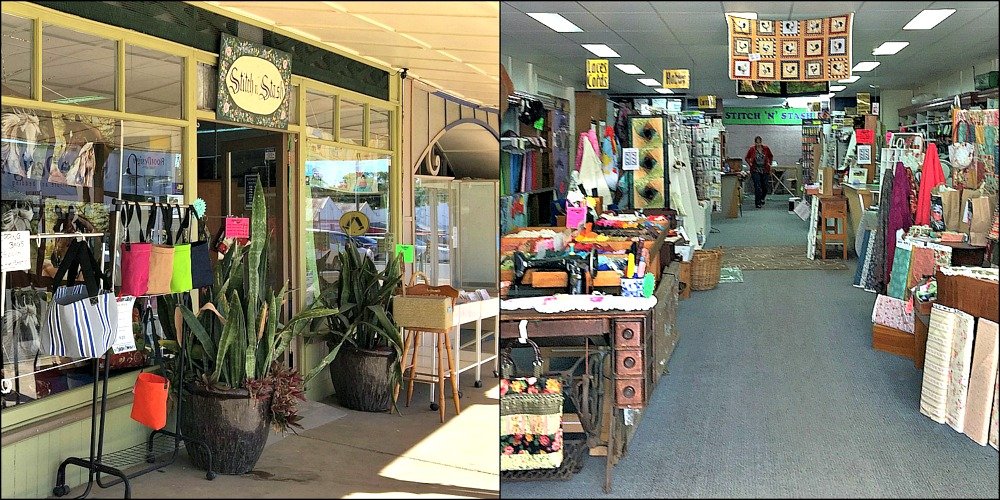 The Town Hall houses the Concert Hall which on September 3rd 2017, will be hosting a performance by Opera Q. It makes me so happy that this beautiful building is still a functioning part of the community. 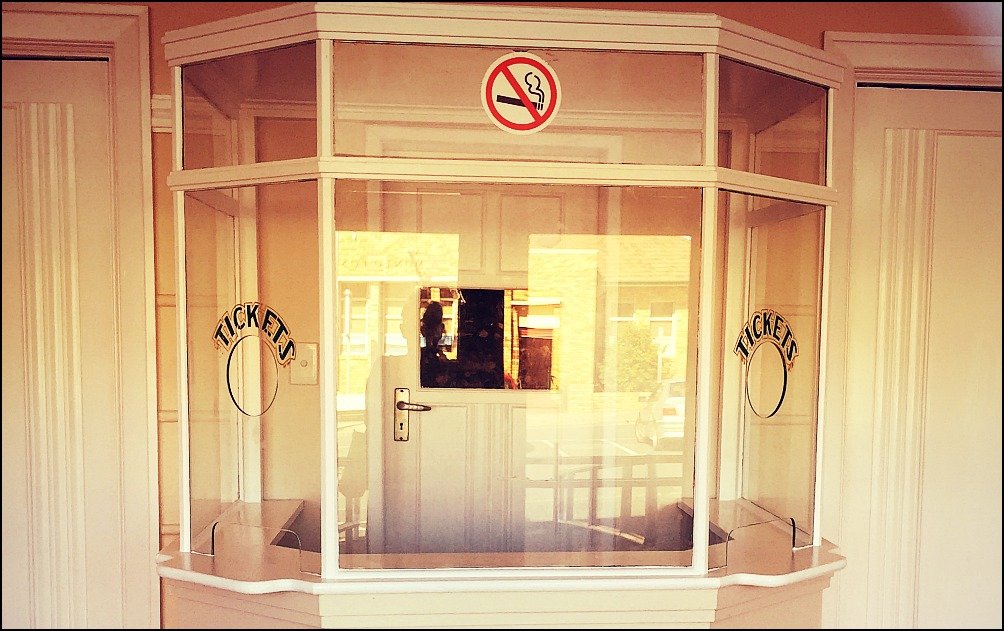 Diagonally opposite the Shire Council, I popped into the Albert, built in 1930, to see their large collection of historical photos. They are well worth checking out. 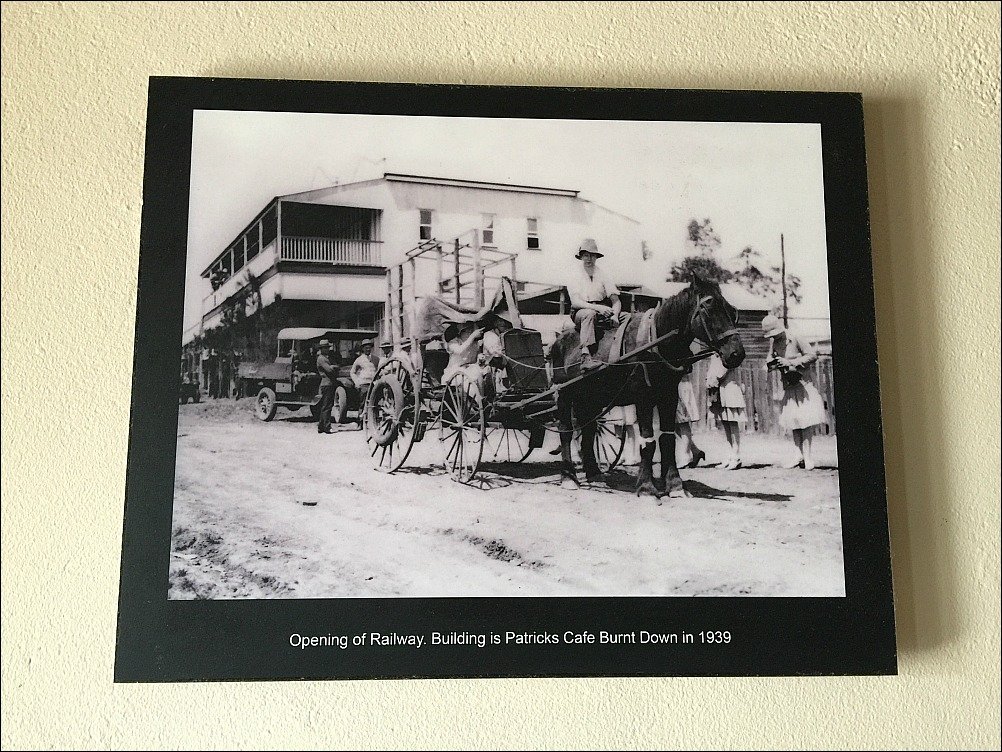 While we’re in a historical mood, take a look at this Art Deco trimmed shop front. This shop is standing empty. 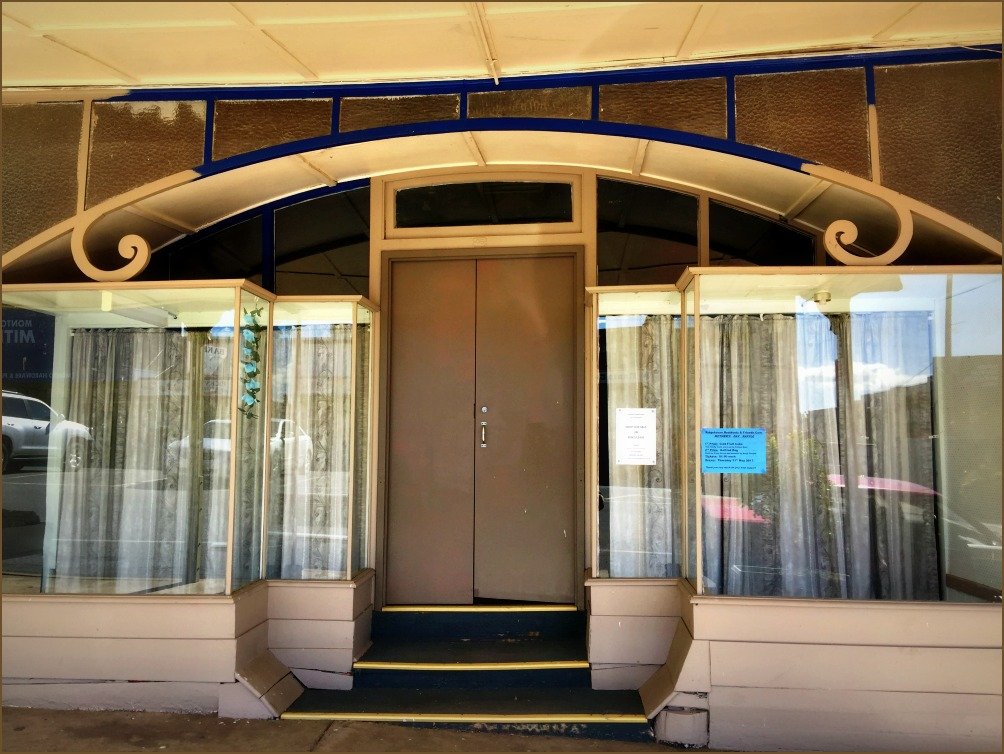 20 Flinders Street (Burnett Hwy).  Wander around the historical buildings relocated from surrounding properties and Cania gold fields at will, or ring 4167 2216 for access to the internal exhibits. While there check out a replica of Beautiful Betsy, the liberator aircraft that crashed at Kroombit Tops, north of Cania, 26th February 1945, on a flight from Darwin to Brisbane. 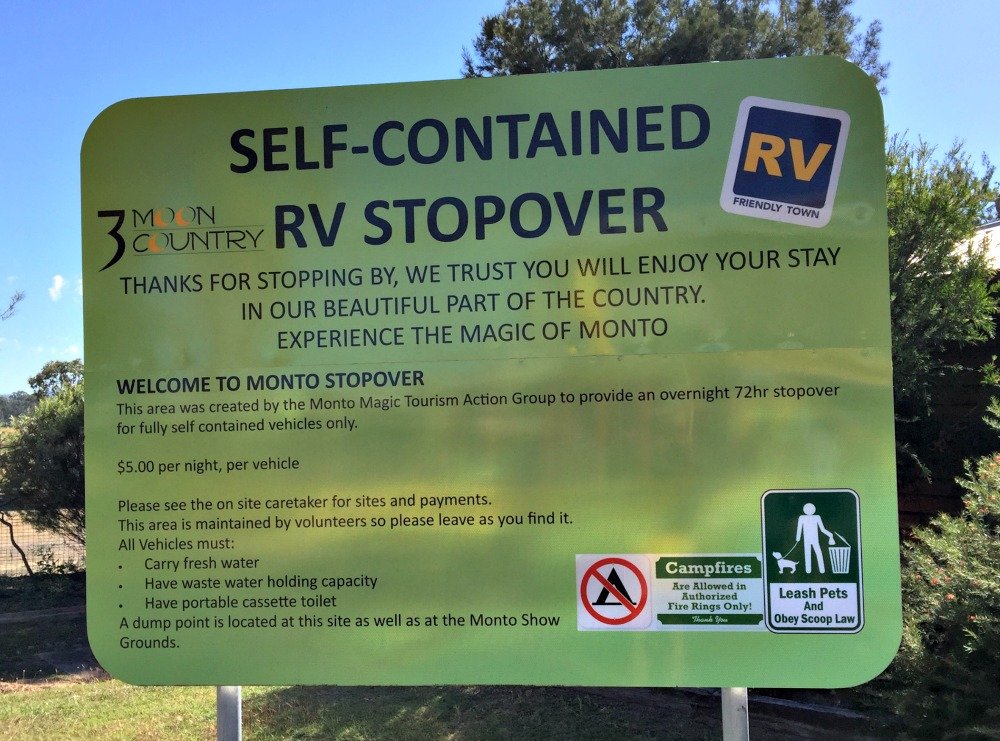 We visited in July and it was wonderful weather for walking, if a little chilly overnight and early morning. Skies were blue and clear and good for photography.

If you are in Monto it’s probably because you’ve just left the gorge are on your way there. If not, do yourself a favour and visit Cania Gorge. We are devotees of the beautiful landscape – it’s coloured sandstone cliffs, forests, prolific birdlife and eight signposted National Park Walks.

15.7 road km south of Monto, Mulgildie came to life around the same time as Monto with the influx of post WWI landowners. It has been getting progressively less prosperous since those days, but still has the Mulgildie hotel, grocer, primary school and sawmill. It also has a bunyip hole and of course a Bunyip Statue.

You can’t miss this character filled pub dating back to the 1920’s. It’s covered in paintings of country life outside and bedecked with art and collectibles inside. Everything is for sale including the pub! The beers are cold (priorities!) and the owner and bar staff very friendly. We tried the seafood basket, and calamari with chips, the meatloaf on Turkish was unavailable. Next time I’ll try the roast. Free camping out the back. 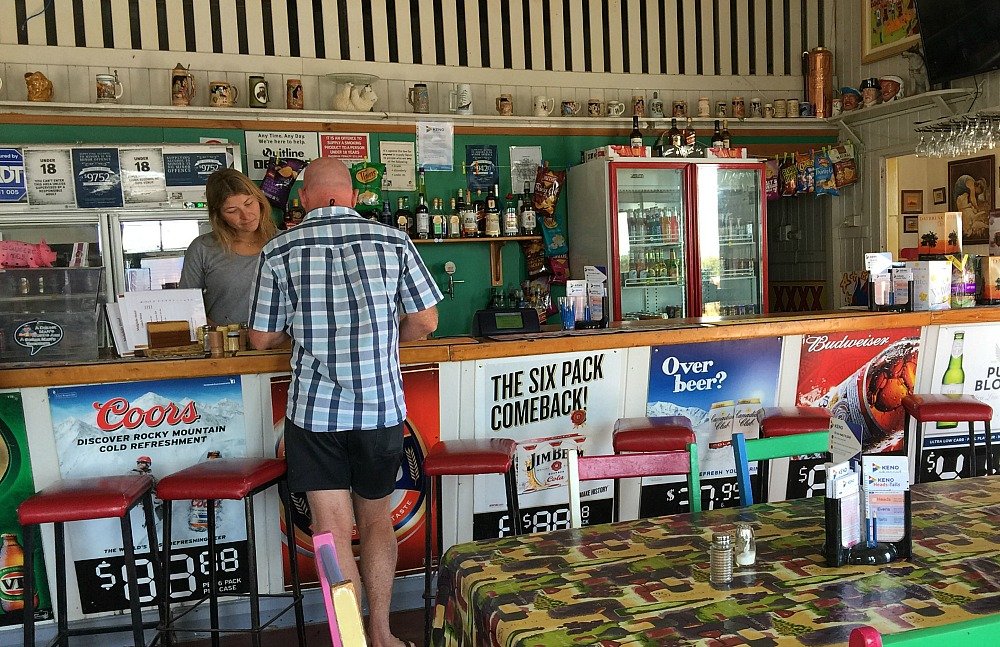 Definitely worth a stop. 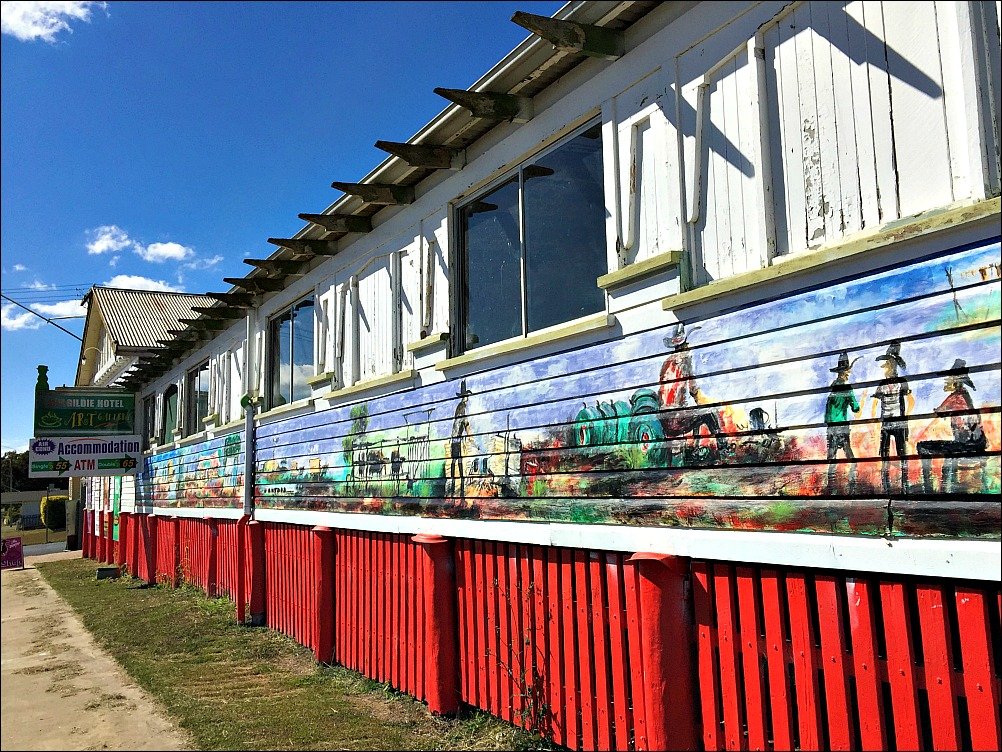 After blink and you’ll miss it Moonford, Monto Qld seemed quite a metropolis. Walking around town, shopping and talking to people, reinforced just how necessary Country Towns like Monto are to communities and travellers alike. What do you think about towns like Monto? Have you ever lived in a small isolated town?

Thanks for reading and commenting – we really appreciate it. If you have a blog, please add a travel post to the link below for Nancie’s Travel Photo Thursday which we co-host with Ruth from Tanama Tales and Rachel from Rachel’s Rumination. All links to blogs are DoFollow. That means I am sharing SEO link juice with you; a good thing!