Siracusa, the ancient Greek stronghold on the south-east coast of Sicily, is seductive in May. Although Spring temperatures should be mild, the stone streets and buildings of this World Heritage listed town, store and radiate the mid-day heat. Sensible locals take a long Siesta with the shutters firmly pulled down, but we cannot resist discovering more Siracusa attractions.

The world slows a notch and Siracusa steps seductively in.

Seerra-koo-za, in a sexy low voice, with a strong rolling r in the middle. Try it!
[pinit] 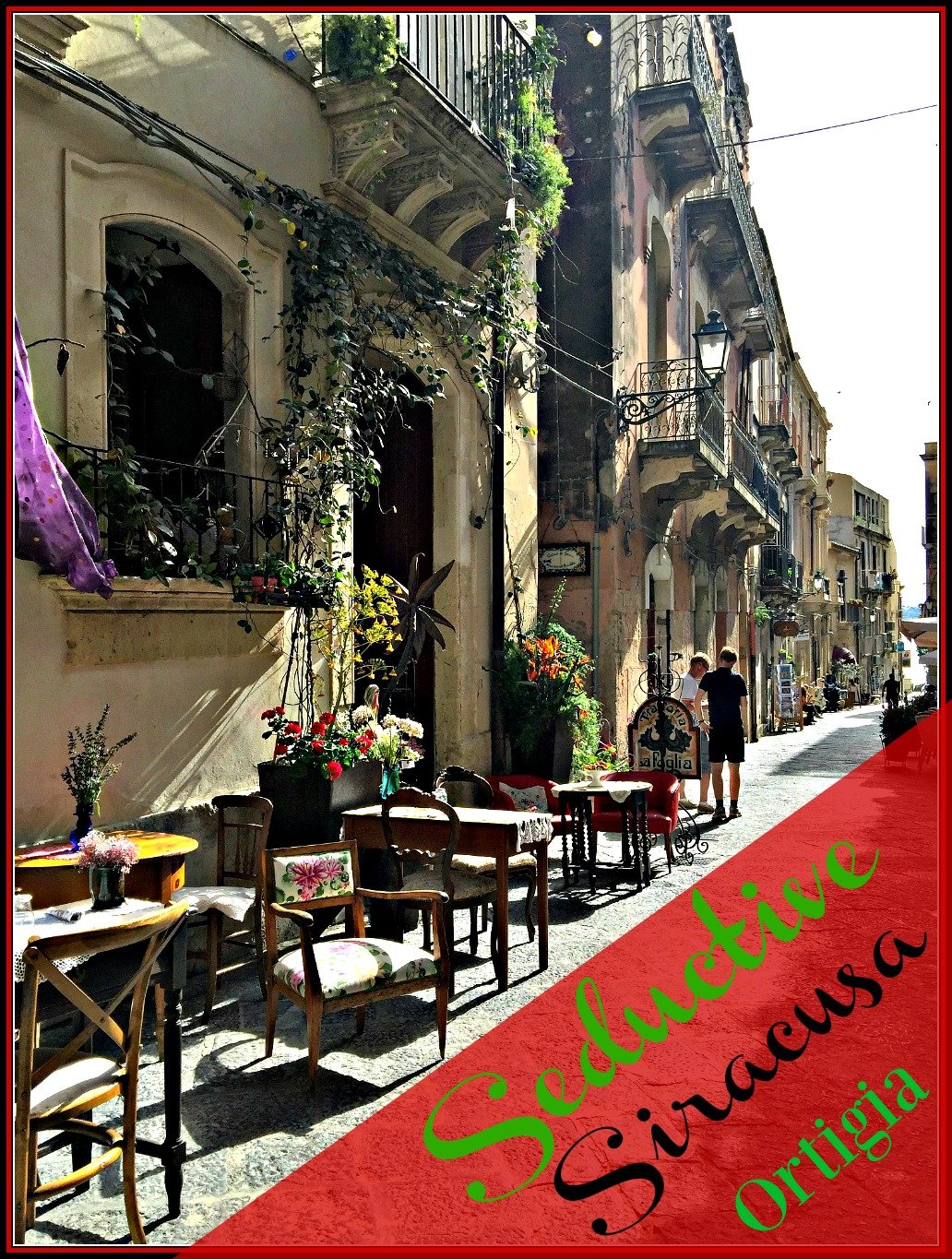 Ortigia, the historical centre where we mostly walk is actually an island, but it’s coastline mimics Siracusa’s mainland so closely that it seems more like a peninsula extension.

As usual our Airbnb hosts play a major role in our Siracusa experience. Free ranging breakfast conversations, where snippets from each other’s lives are traded, inadvertently provide lists of eateries and places to explore. Our huge 8th floor bedroom looks directly to the bells of the closed for restoration, Chiesa di San Giuseppe, in the piazza of the same name. When school is out, mothers congregate below, sitting on ancient steps, standing animatedly gesturing, with a joint eye on their little ones. It’s charming.

In no particular order these are my favourite Siracusa Attractions. When I say Siracusa I actually mean Ortigia Island, the old heart of Siracusa.

Ortigia Market, where Andrea prepares his surely more than foot-long sandwiches packed full of home made cheeses and salami, is also a bustling fish market. Locals take advantage of the passing market trade, with what appears to be a full tree of picked lemons stuffed into a car boot, or a little bucket of fish caught that morning. I could imagine the boot slammed shut and the car disappearing pronto, should an enforcer arrive, or is that my just under the surface Mafia mania? 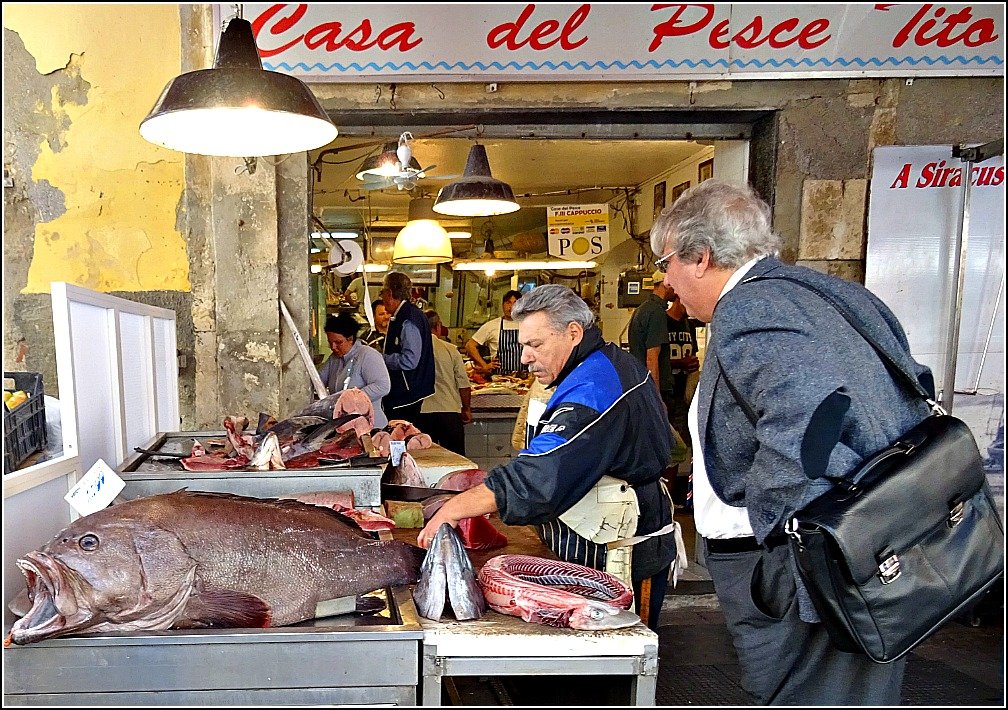 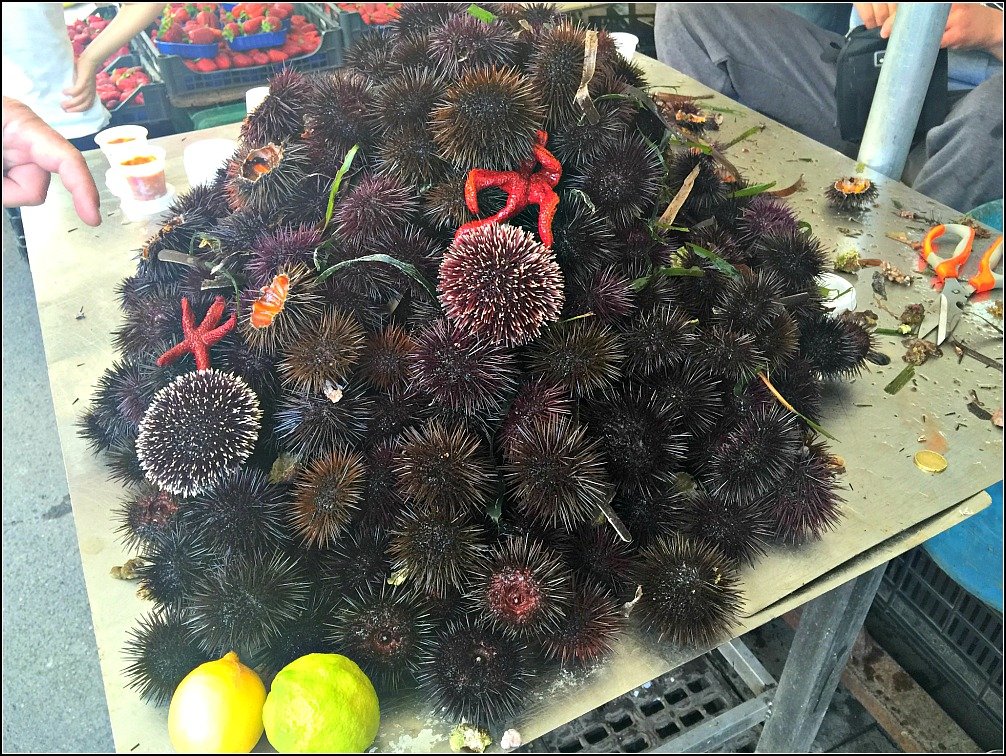 I’m thankful that the once jangling bells of Chiesa di San Guiseppe won’t be bursting through our ever open bedroom doors. I do hope it will be restored one day though. 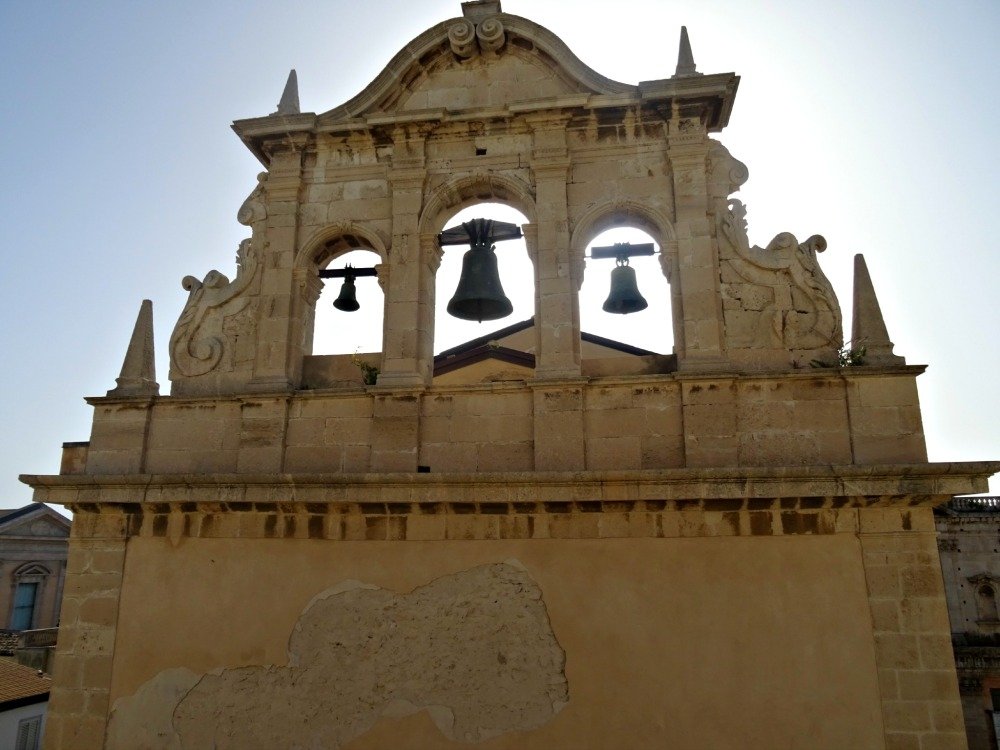 Ortigia overflows with crumbling limestone buildings, and the salt air takes it toll on the wrought iron. Restorations are an ongoing fact of life all over Sicily and it’s common to see balcony nets attached like upside down shower caps, to stop bits and pieces plummeting onto pedestrians. 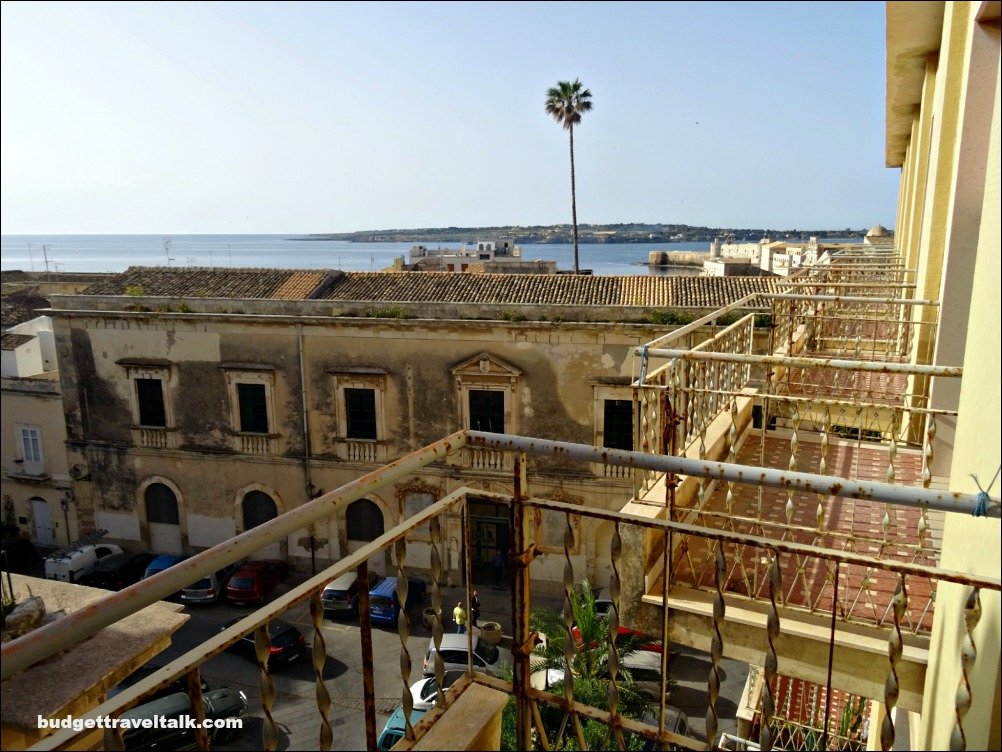 Looking up in Ortigia never disappoints. 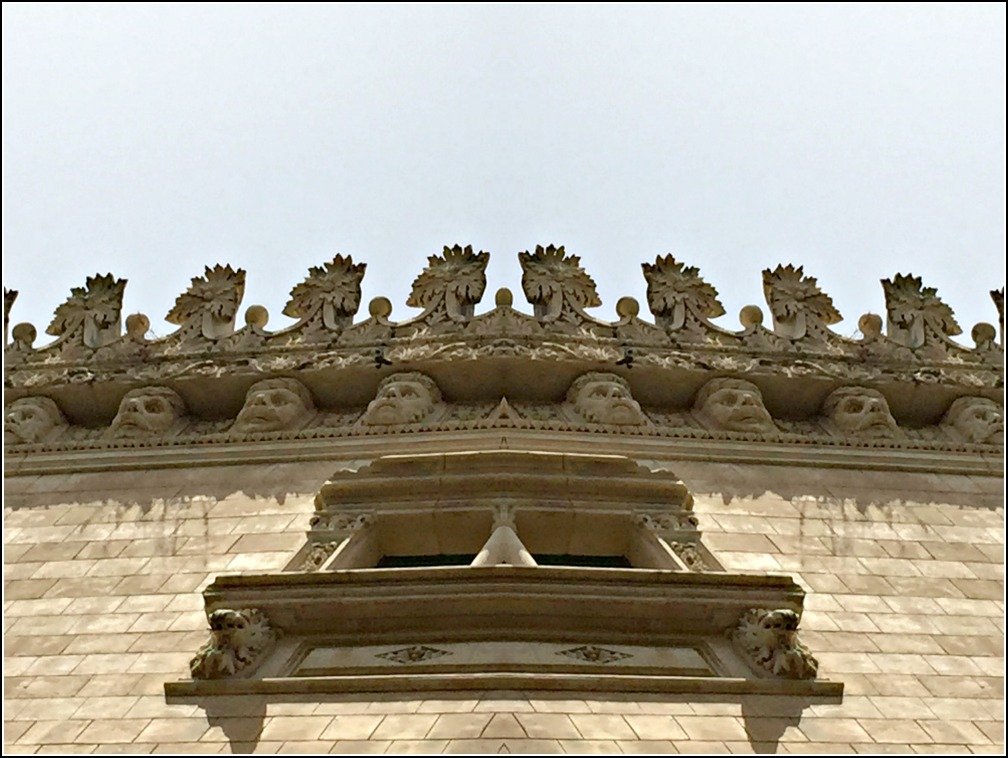 Balcony views over the Ionian Sea and strains of music float on the stillness. 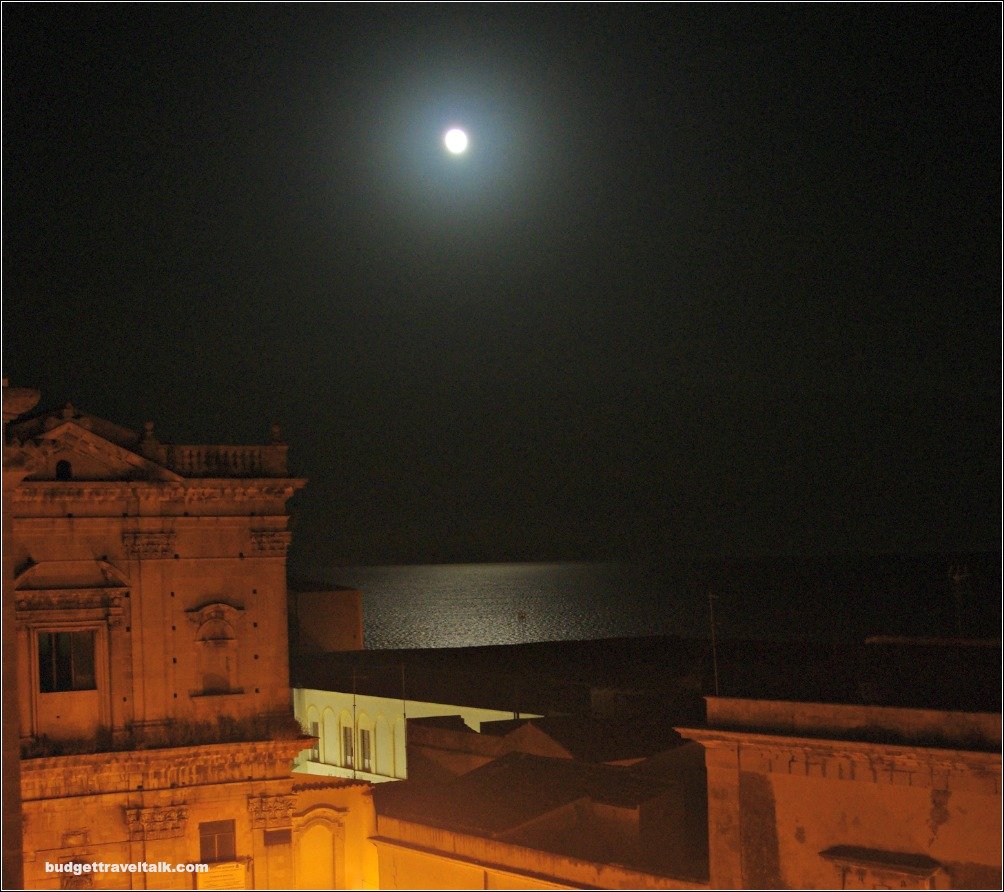 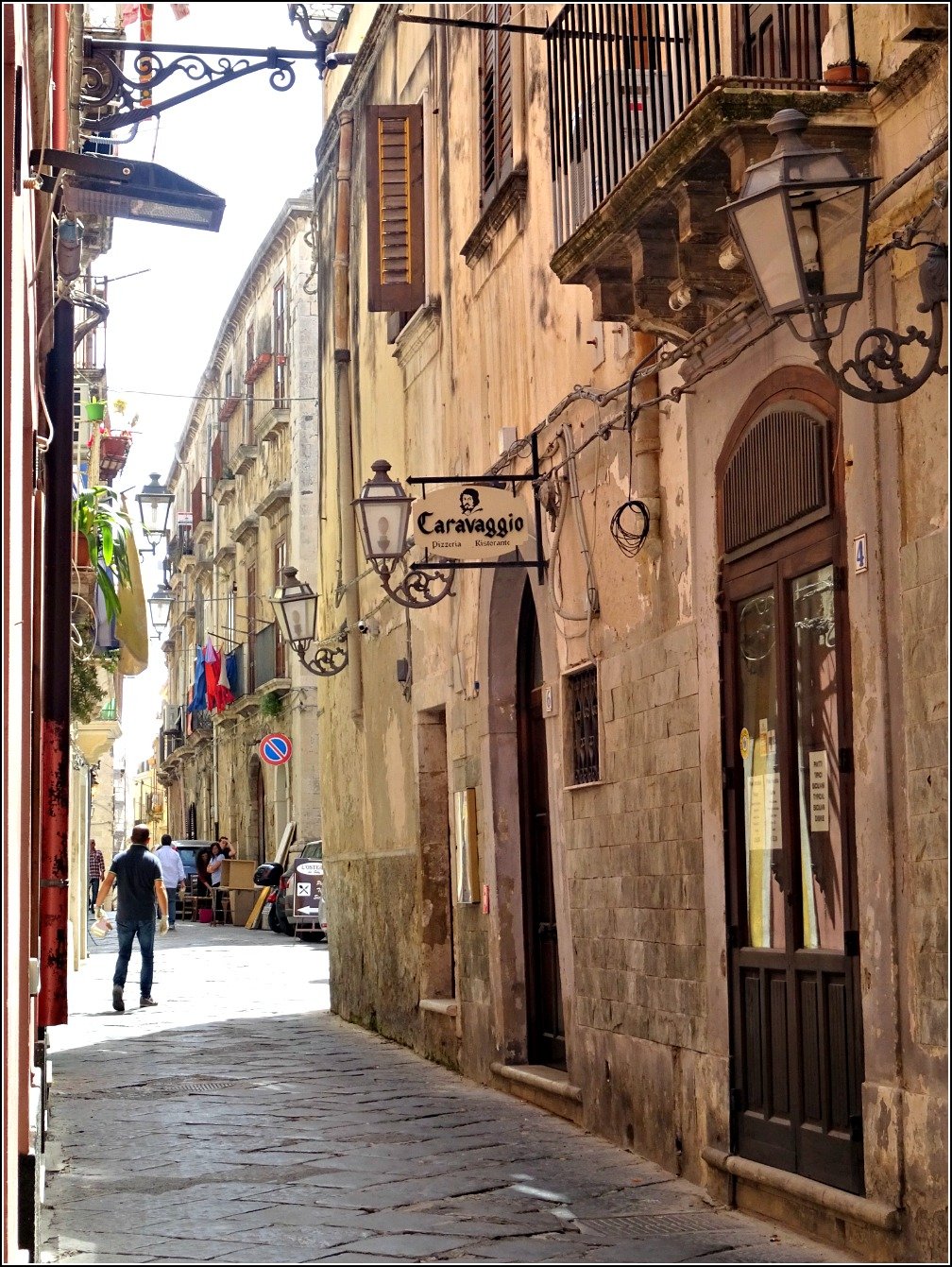 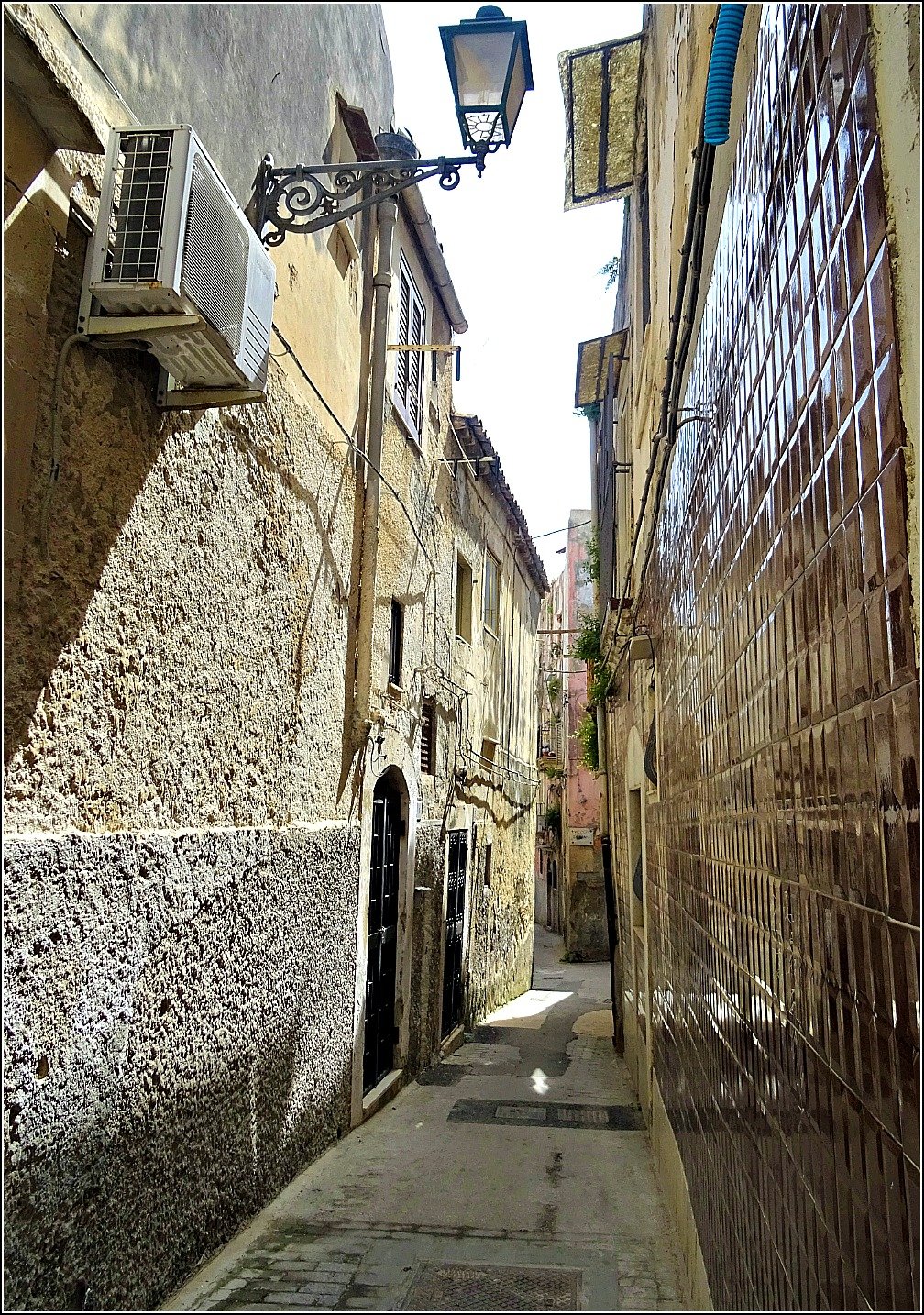 Piazza Pancali is where you will find this ancient Greek Monument. Modern day life carries on around the temple, unfazed by it’s early 6th Century BC roots. It is the most ancient Doric temple in Sicily. Visit the archaeological museum in Syracusa for a better understanding of this temple. 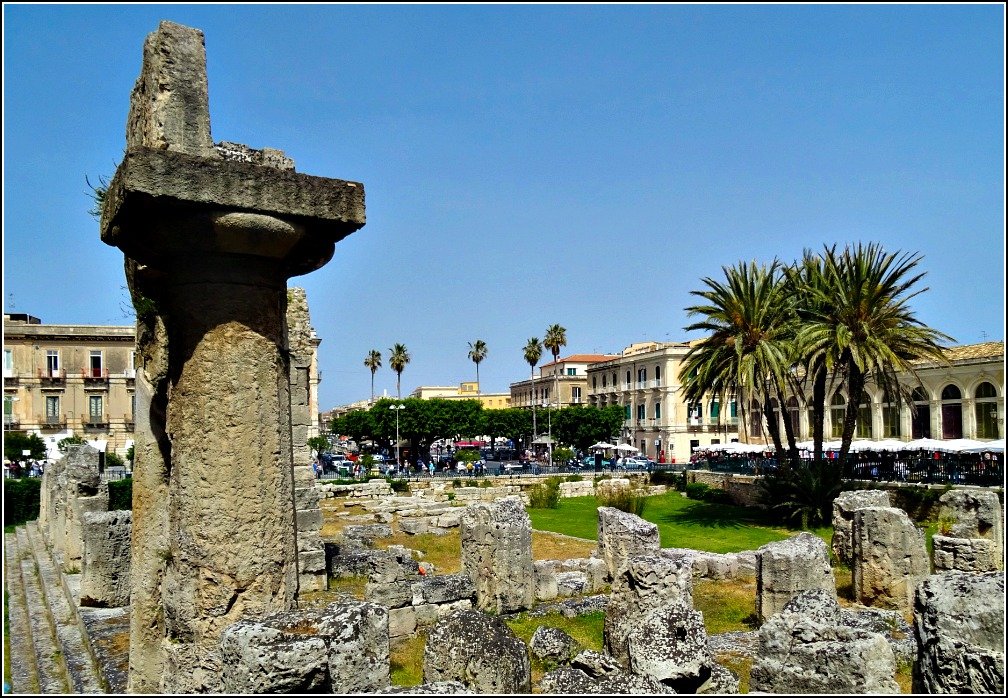 Finding an outside bar in Piazza Archimede which offers both shade, sun and a cool view of the Diana Fountain is bliss. 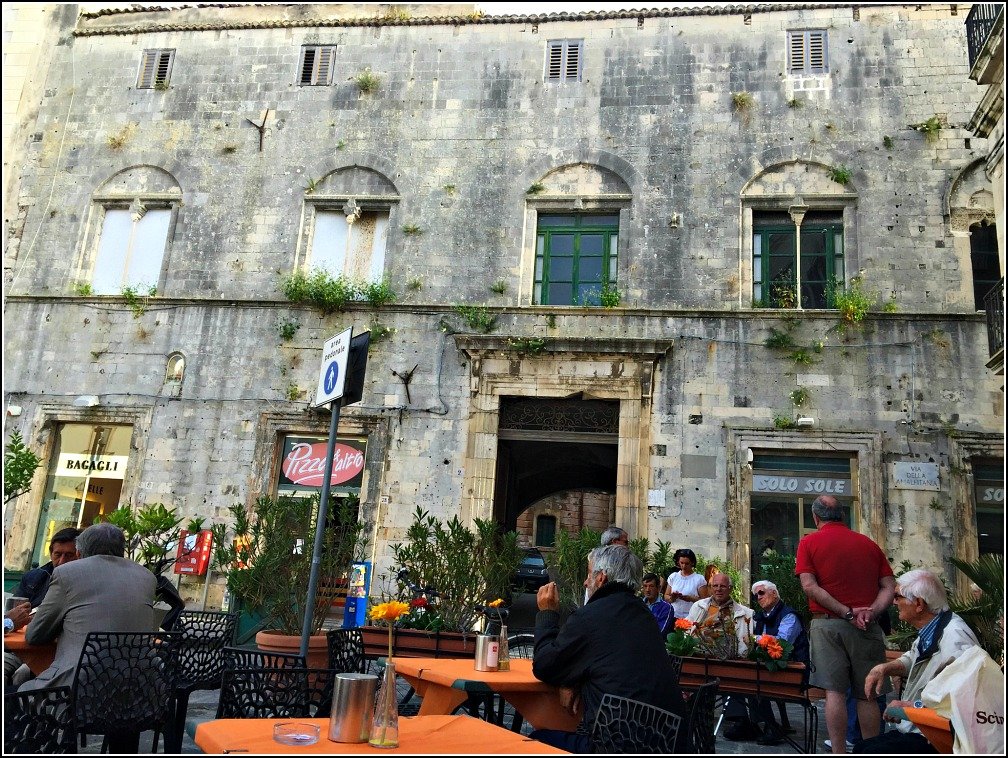 The fountain is circular with a tall centrepiece of Diana with her bow and dog. She is surrounded with other statues like this one of Mermaid and Child and they are bathed in spurts of water. It is a gorgeous fountain and it makes a great meeting place with the Bar Diana across the road.

Nearby there is tourist information and bus stop. 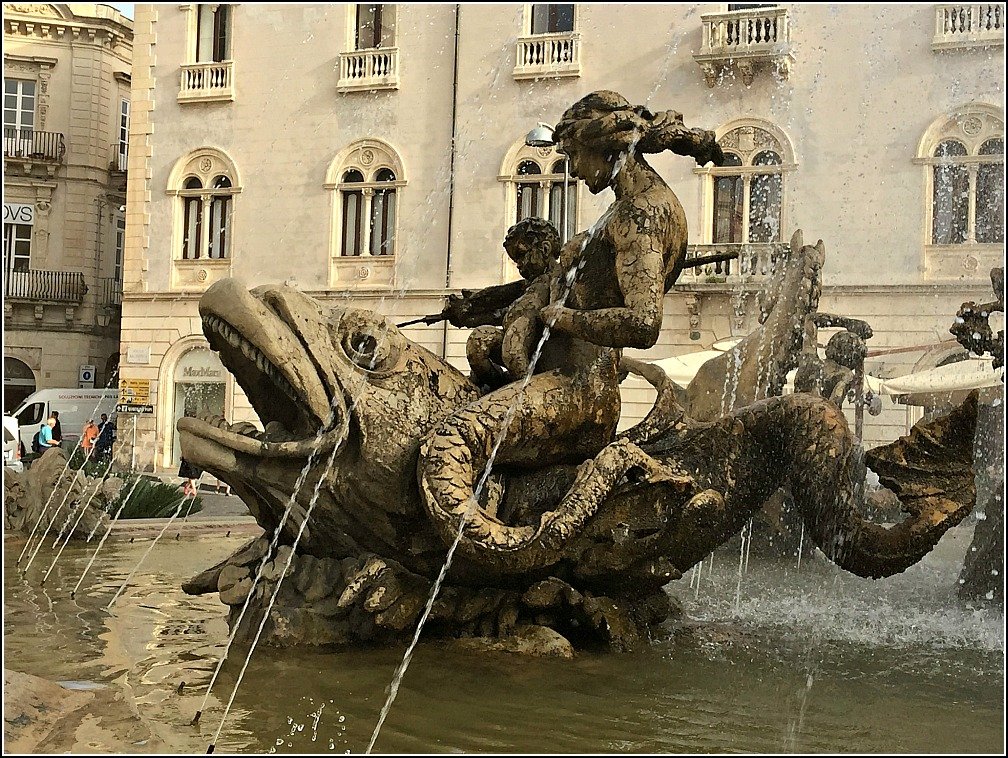 Fonte Aretusa is the original water source for Siracusa. Peer into the dark waters, watch large mullet, oversized gold fish, and happy ducks and geese, swimming perpetually around the only wild growing papyrus in Europe, outside of Greece. In Greek mythology the nymph Arethusa was turned into a spring and being chased by Greek River God Alpheus, they both popped up here in Siracusa – creating a freshwater spring.

The Papyrus might have joined them for the ride, but these modern day plants are descended from actual Cyperus Papyrus Linneo plants gifted to a Ruler of Siracusa eons ago. 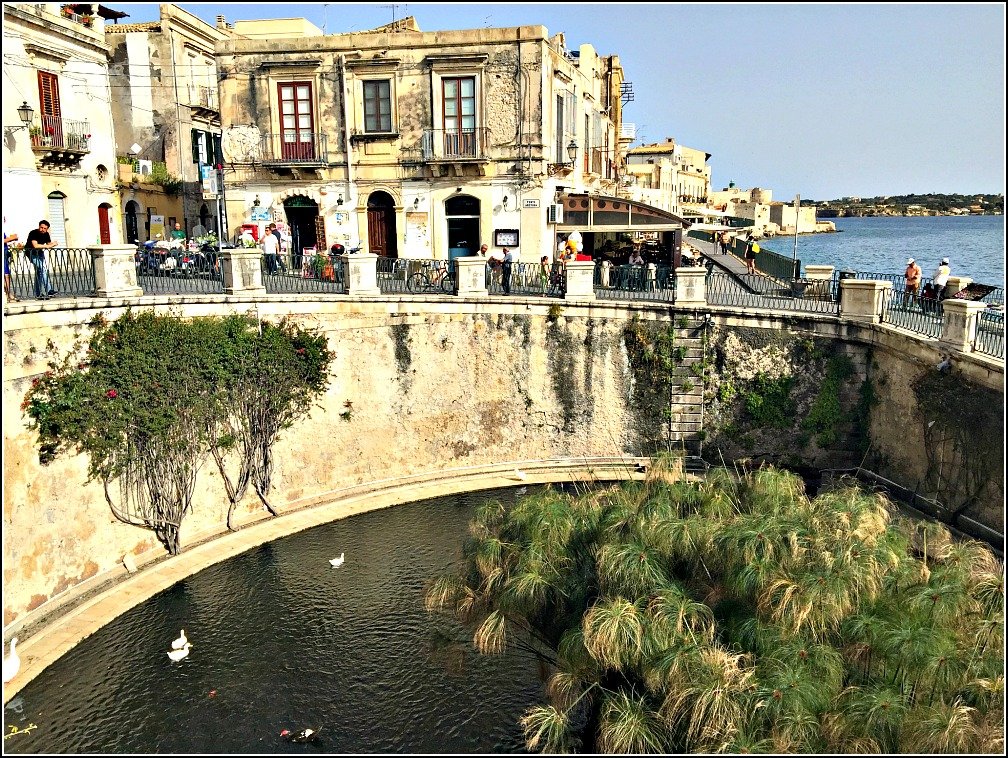 9. The Walls of Ortigia and Castello Maniace.

Walking the sea walls of Ortigia was always going to be on our itinerary. This stretch leads from the swimming beach, toward Castello Maniace, the 13th century fortress. From the castle turn right and cut back toward Fonte Aretusa.

The one and only of Siracusa beaches located in Ortigia. 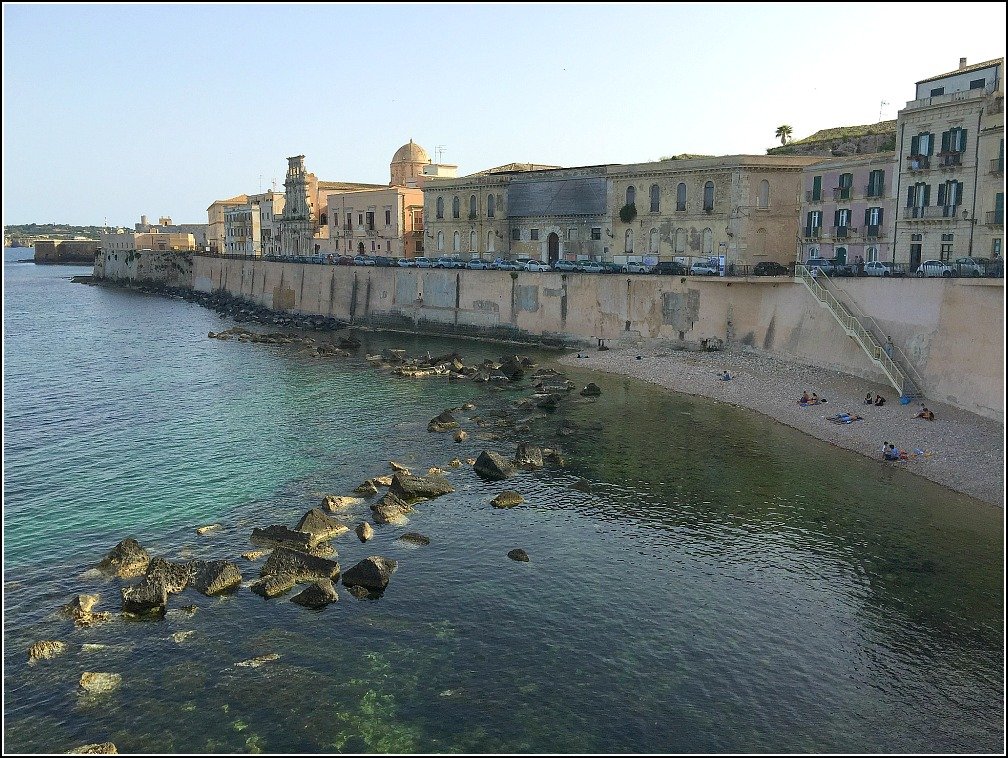 10. The Causeway between Ortigia Island and Mainland Siracusa.

The causeway looking from the main Umbertino Bridge. Looking to mainland Siracusa from Ortigia Island. 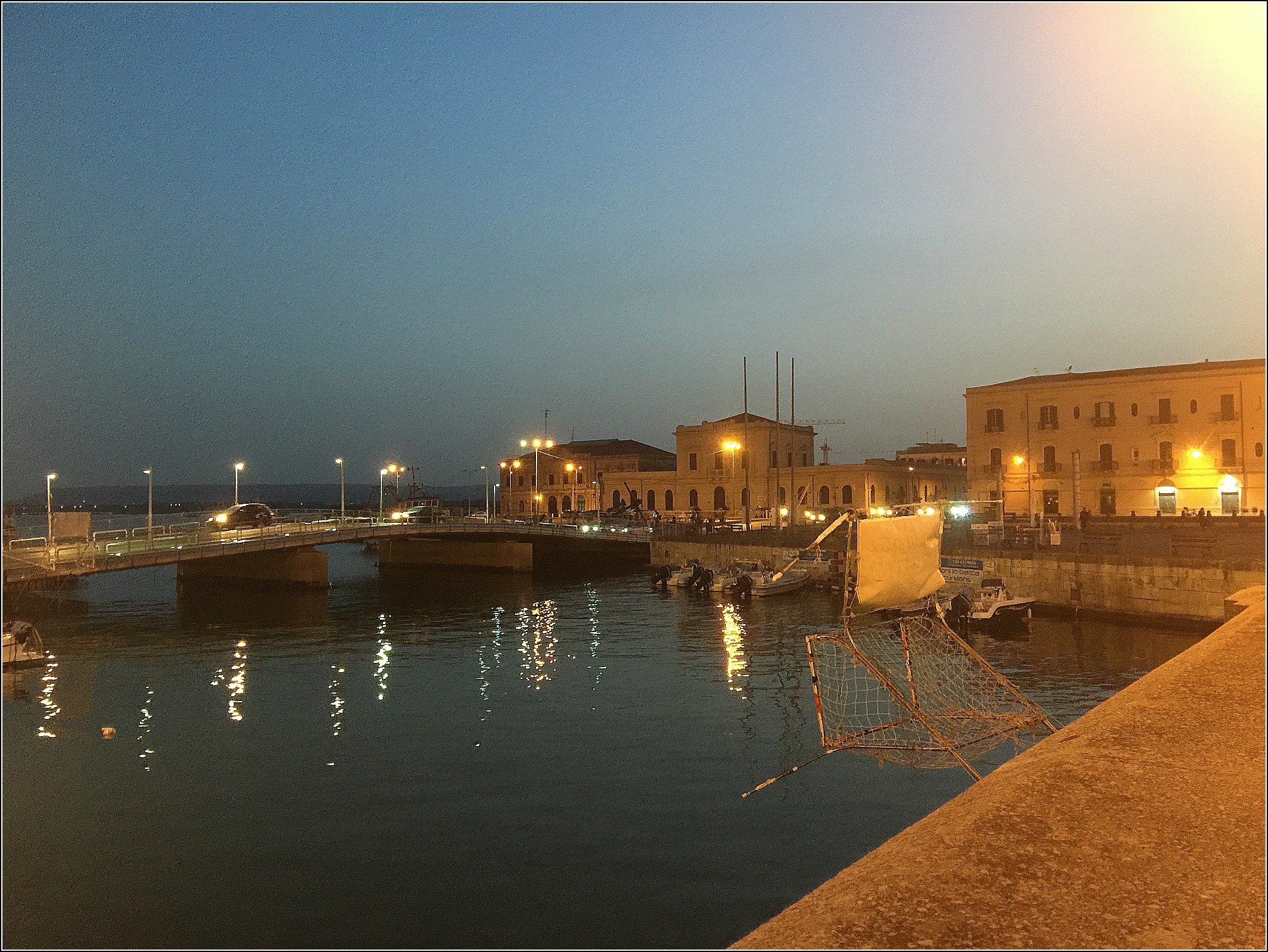 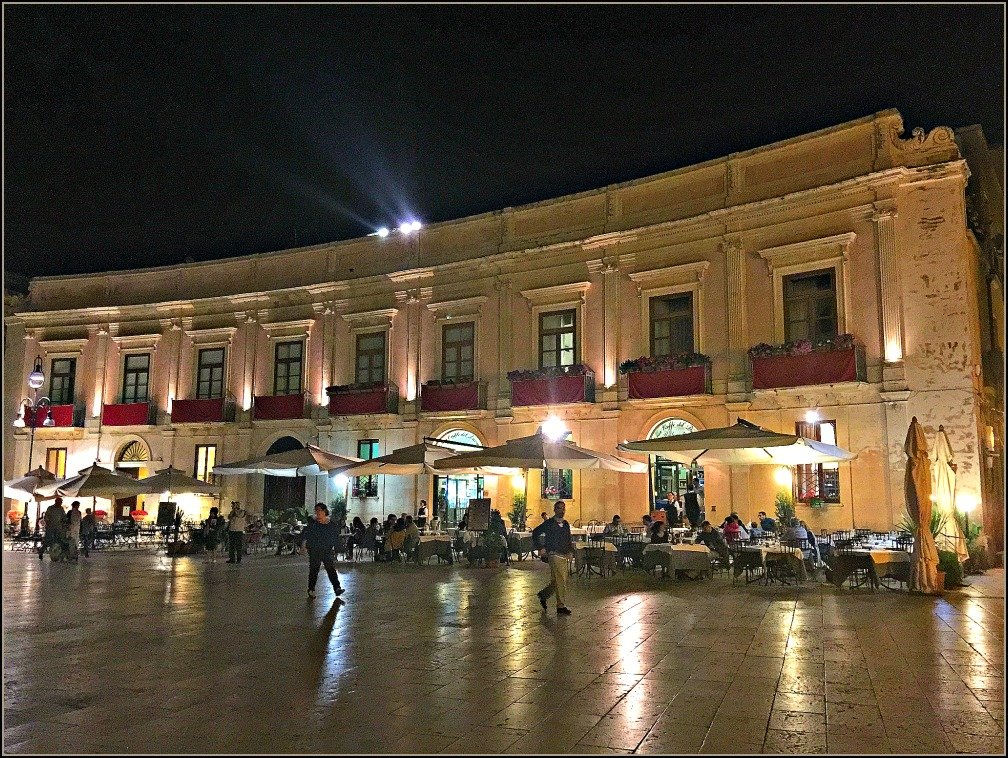 Twilight in Piazza Duomo looking toward the Baroque Santa Lucia Alla Badia, built after the earthquake in 1693. 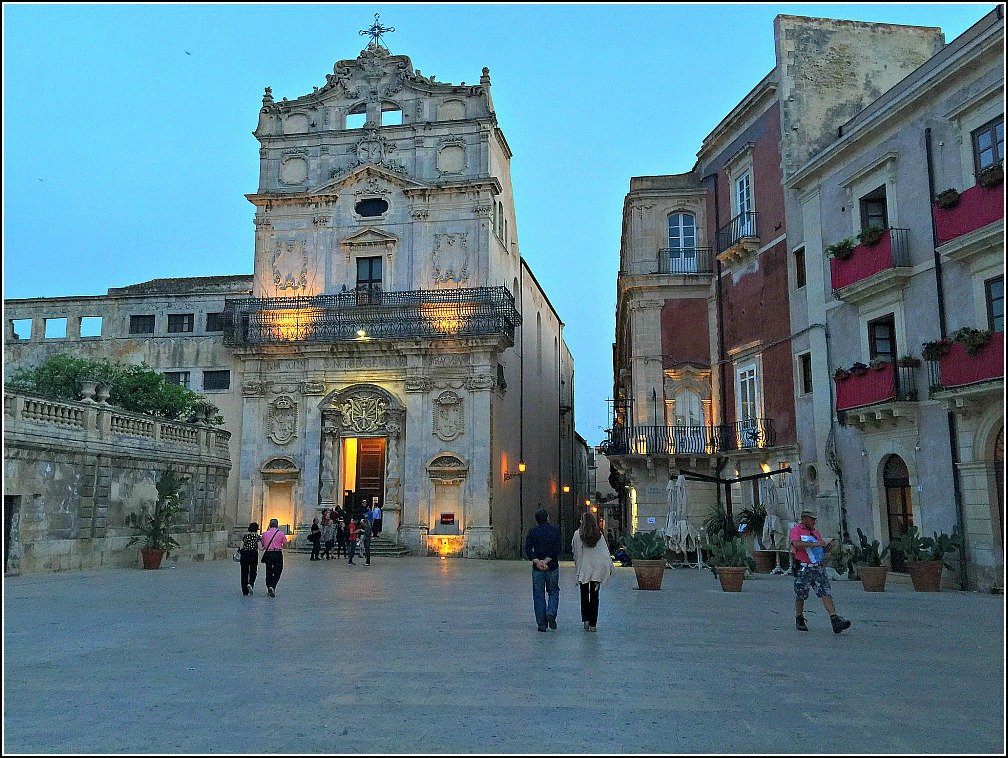 13. The Oldest Jewish Baths in Europe

Climb down a ladder to discover these religious baths. It is an atmospheric and interesting tour. You can read more about it and more Strange Sights in Siracusa HERE.

How to get to Orgigia, Siracusa, Sicily

We joined the Catania to Siracusa train at Taormina/Giardini Naxos, the trip taking a little more than two hours. Your Airbnb host will probably collect you, but Siracusa Train Station is not far from Ortigia – the best place to stay in Siracusa.

Arriving By Car and Siracusa Parking.

Parking can be problematic on Ortigia Island.  The streets are small and there are one way streets. There are ZTL Limited Traffic Zone lights before reaching the island. If they are red, as they often are on week-ends, do not proceed. Look for accommodation that has a private parking area and who might provide an access pass. Try Molo Sant’Antonio carpark on the mainland.

PIN THIS FOR LATER